Outdoor Drinking, Romance of It All
With the cool autumn breeze in the air, September is a great time to be sitting outside for a drink or two. We introduce you to two hot spots in Seoul and Busan where you can do exactly that.

Oktoberfest in Korea, Euljiro Nogari Alley
Seoul is home to many old, vintage bars and eateries. In particular, areas surrounding tourist attractions have hidden gems of those shops. Nogari Alley in Euljiro-3ga is the hottest place in the city today, even more so than sexier names like Jongno, Myeongdong or Gangnam.
Lights never go out at night in Euljiro-3ga, which has long been a popular destination for the Average Joes. The origins of Nogari Alley date back to the 1980s. The neighborhood always had all sorts of shops, handling shipping, signs, pottery, electronics and printing, and one by one, bars popped up that drew office workers and commoners like magnets. 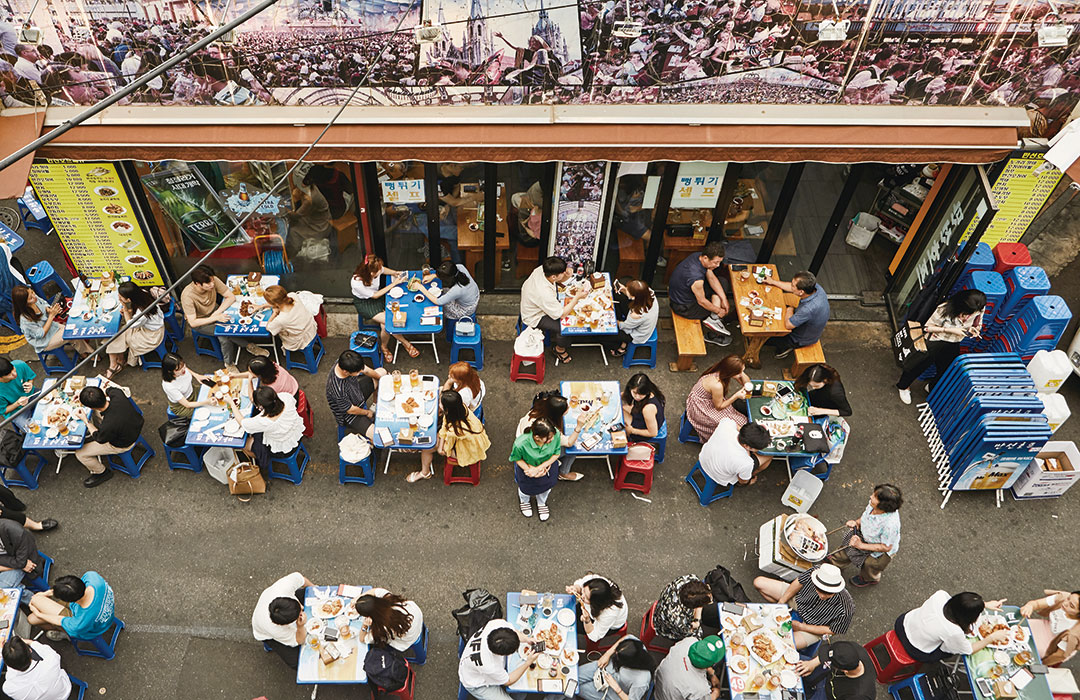 Eulji OB Bear was the first bar to open in the area. In December 1980, Kang Hyo-geun, father of the current owner, launched the family business that has been handed down to the next generation in Nogari Alley. In May 2018, the government designated the place 'Centennial Shop.' Munchen Hof and Manseon Hof joined Eulji OB Bear later. Today, Manseon is the most popular place. It has seven locations across the city, and hosts hundreds of patrons every night. Once the domain of middle-aged men, Nogari Alley has become a trendy spot for 20-somethings and earned the moniker 'Hip-jiro.'
Nogari Alley is near exit Nos. 3 and 4 of Euljiro 3-ga subway station on Line 3. First-time visitors may feel lost at first. Only some ordinary shops come into view and it can be hard to find the entrance to the alley. And once there, their jaws will drop at the sight of the crowd sitting at plastic tables. 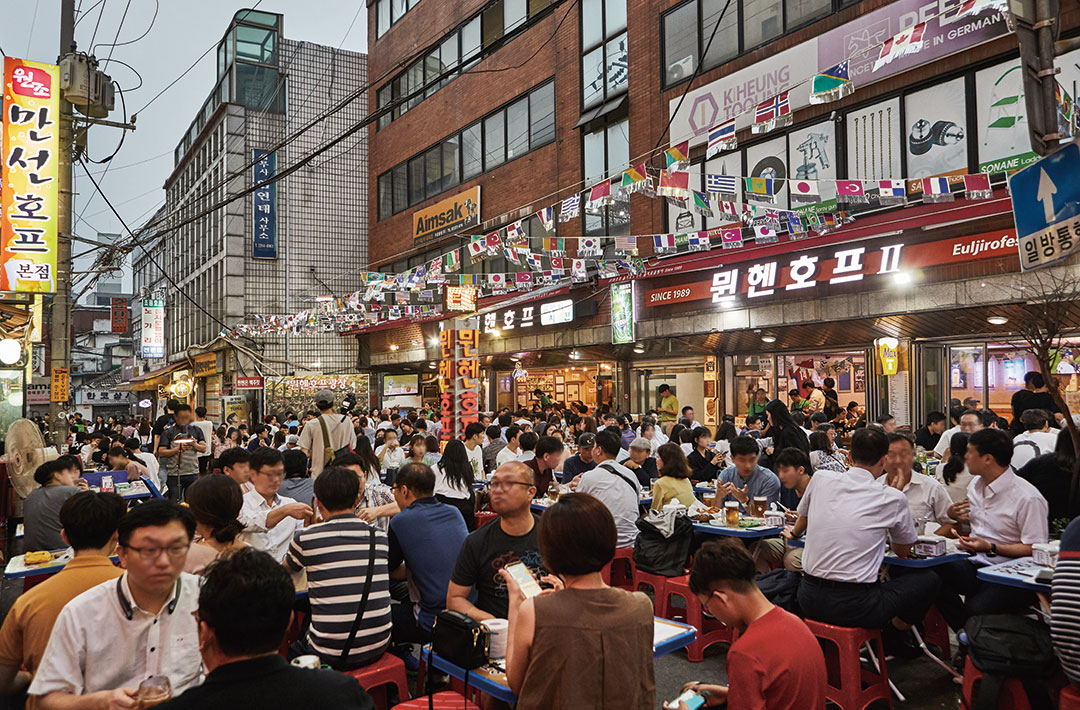 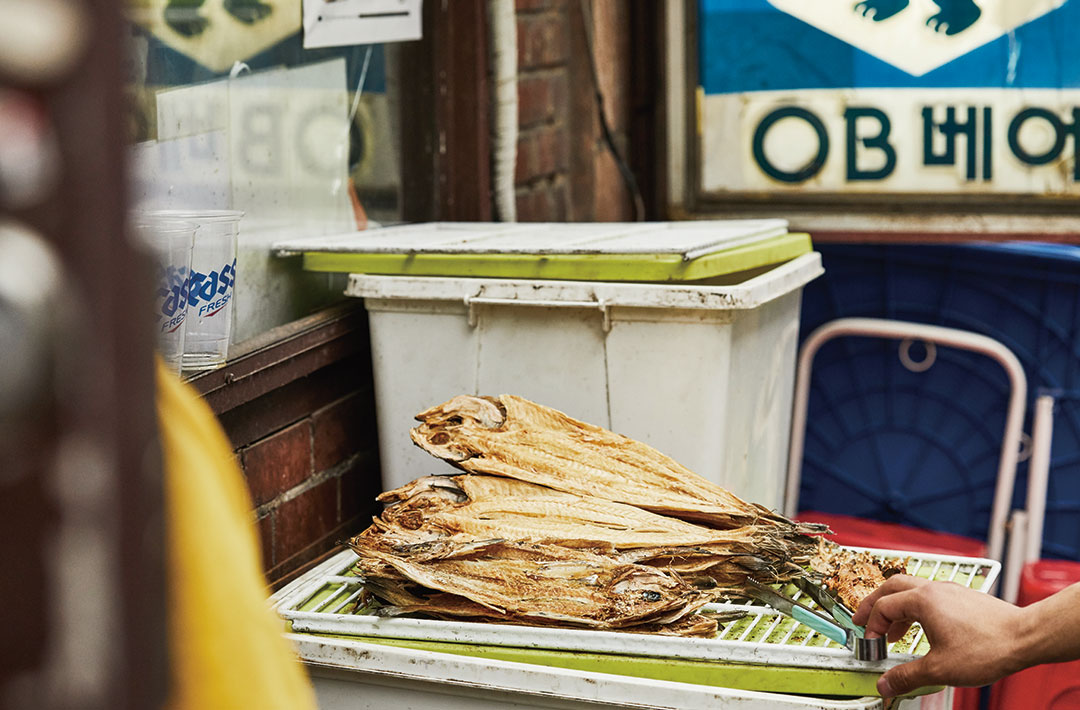 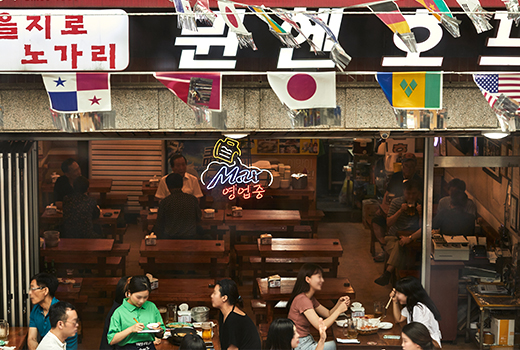 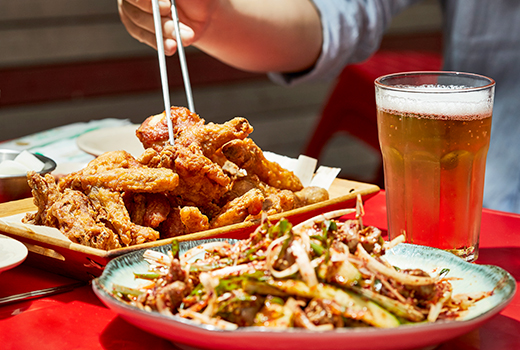 The best thing about Nogari Alley is clearly draft beer, best enjoyed while sitting outside. These bars open between noon and 1 p.m., but the tables don't come out on to the street until 6:30 p.m. When neighboring shopkeepers pull down their shutters, colorful plastic chairs start taking their places. Early birds will grab seats on the rooftop of Manseon Hof. The alley usually overflows with patrons by 7:30 p.m. Even in this chaos, people never stop snapping pictures.

The business is thriving, but these bars still only charge you 1,000 won for one nogari, or dried young pollack. These owners always put their patrons first. Euljiro Golbaengi (whelk) and fried chicken are the most popular items. Euljiro Golbaengi is different from your typical whelk dish because it comes with sliced green onion and pollack jerky, which should be soaked in water before you rip it into pieces. For 2,000 won, you can add thin noodle. And that white noodle makes for a perfect companion to the red sauce and chewy whelk, plus sliced onion and fish jerky. Their unlikely blend creates a unique taste and flavor. Wash it down with a cold draft beer, and you couldn't ask for a better way to wind down after a long day.

Where to Stay in Euljiro: LOTTE HOTEL SEOUL
LOTTE HOTEL SEOUL is the best luxury hotel in Korea, situated in the heart of northern Seoul in Sogong-dong. It's close to Seoul Station, making it a convenient hotel for those needing to get to airports or other places in the country. It's surrounded by tourist attractions such as Euljiro, Myeongdong and Cheonggyecheon. The hotel has 1,015 rooms of unique and creative interior designs, catering to business travelers and tourists alike. Pierre Gagnaire a Seoul, a three Michelin-starred restaurant, and La Seine, a buffet restaurant with some 200 international dishes on the offer, will whet your appetite.
Address Euljiro 30, Jung-gu, Seoul
Phone +82-2-771-1000
Website LOTTE HOTEL SEOUL
Where to Stay in Euljiro: LOTTE City Hotel Myeongdong
LOTTE City Hotel Myeongdong is a premium business hotel, standing 27 stories tall with 430 rooms. It is located between the shopping district of Myeongdong and Cheonggyecheon, which flows through the heart of the city. It's also close to other tourist spots such as Dongdaemun History and Culture Park (원고에 '동대문문화역사공원' 으로 되어있는데 '역사문화'가 맞는 듯 하네요. 지하철 역 이름도 그렇고요), Sinchon and Namsan. There are five types of rooms, including Superior Suite and Deluxe Family Twin. They all have modern and luxurious interiors, and offer LOTTE HOTEL' premium bedding system with He:on, ensuring a comfortable stay for all guests.
Address Samil-daero 362, Jung-gu, Seoul
Phone +82-2-6112-1000
Website LOTTE City Hotel Myeongdong 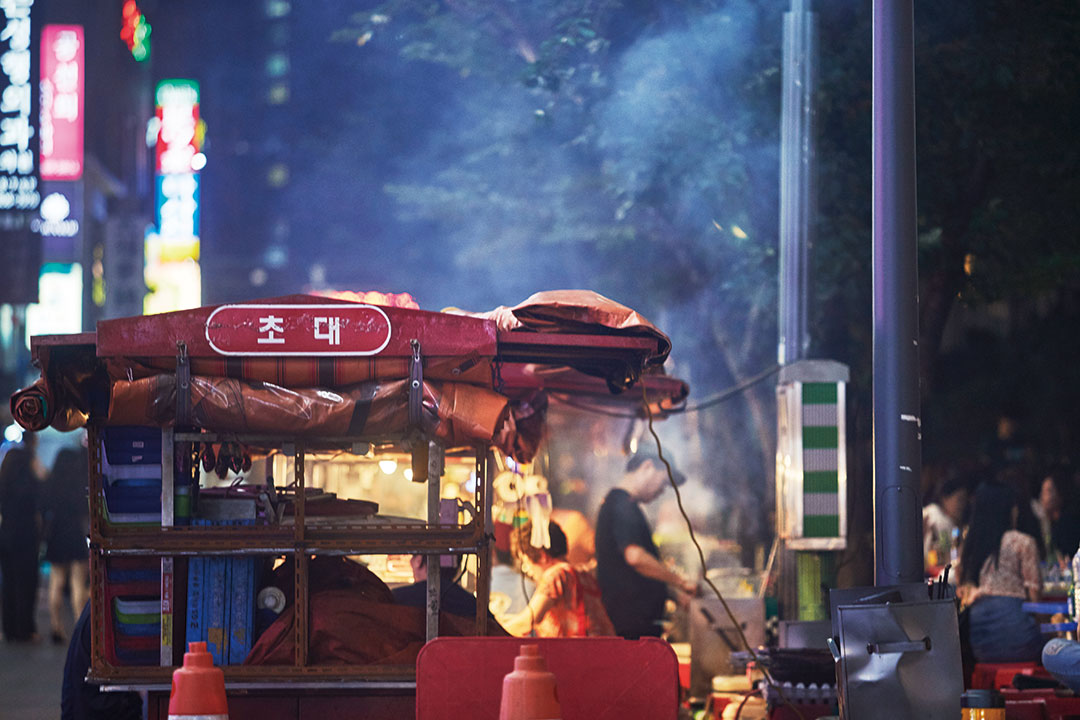 Streets of Youth and Freedom, Seomyeon Pocha Alley
Busan is synonymous with beaches like Haeundae and Gwangalli. They're always full of tourists. But Seomyeon has long been the heart of Busan, too. Those who aren't familiar with Busan may have some trouble finding the area, because, technically, 'Seomyeon' doesn't exist on the map. The name comes from Seomyeon in Dongrae county during the Japanese colonial period. Seomyeon really refers to areas in Bujeon-dong and Jeonpo-dong in Busanjin-gu. Seomyeon is also famous for its fashion. Young Street, Samjeong Tower (formerly Fiesta) and other shopping malls and clothing shops can be found there. 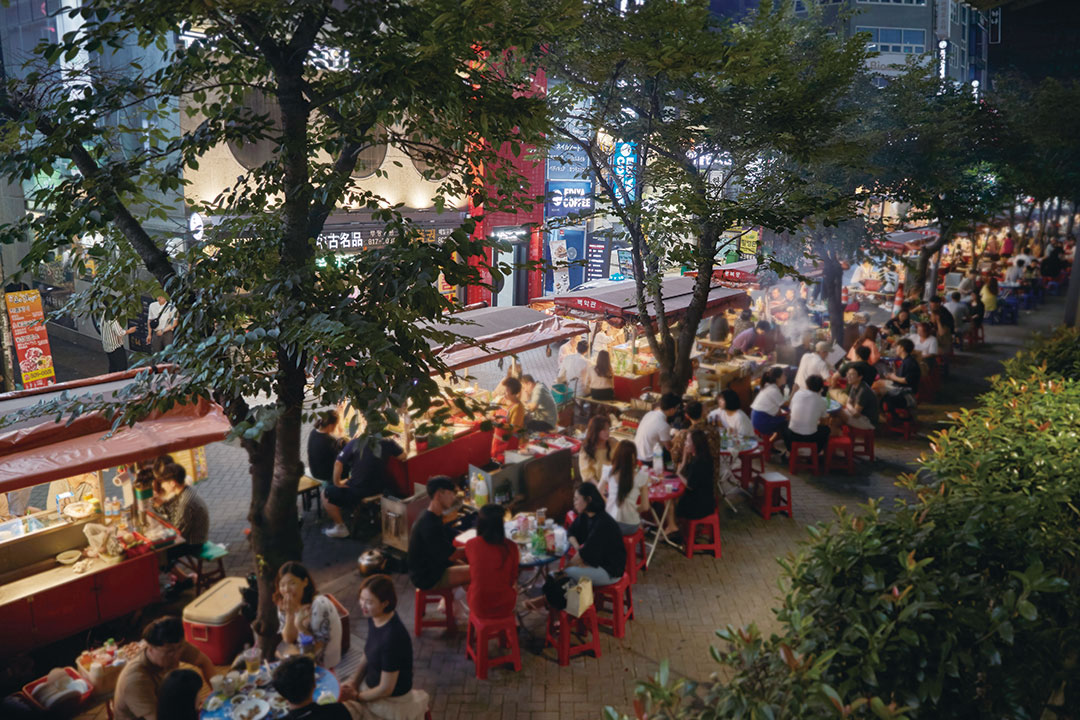 Seomyeon has two faces. During the day, it's Busan's best answer to Seoul's Myeongdong. By night, alcohol starts flowing up and down Seomyeon's streets. There's an alley dotted with pojangmacha or 'pocha' in short, which refers to street stalls selling beverages and food. The so-called Pocha Alley was formed 10 years ago. Some 60 stalls lined up outside LOTTE Department Store were removed and in 2009, a formal street of stalls was paved. Old stalls gave ways to the new, stainless stalls in orange and red.
The baseball club Lotte Giants are considered a symbol of Busan. In Seomyeon, LOTTE Department Store's main Busan shop and LOTTE HOTEL BUSAN are the two major landmarks in the city's commercial center. LOTTE Department Store stands in the heart of Seomyeon, adjacent to Pocha Alley. These dozens of stalls next to the store make for an almost exotic sight. 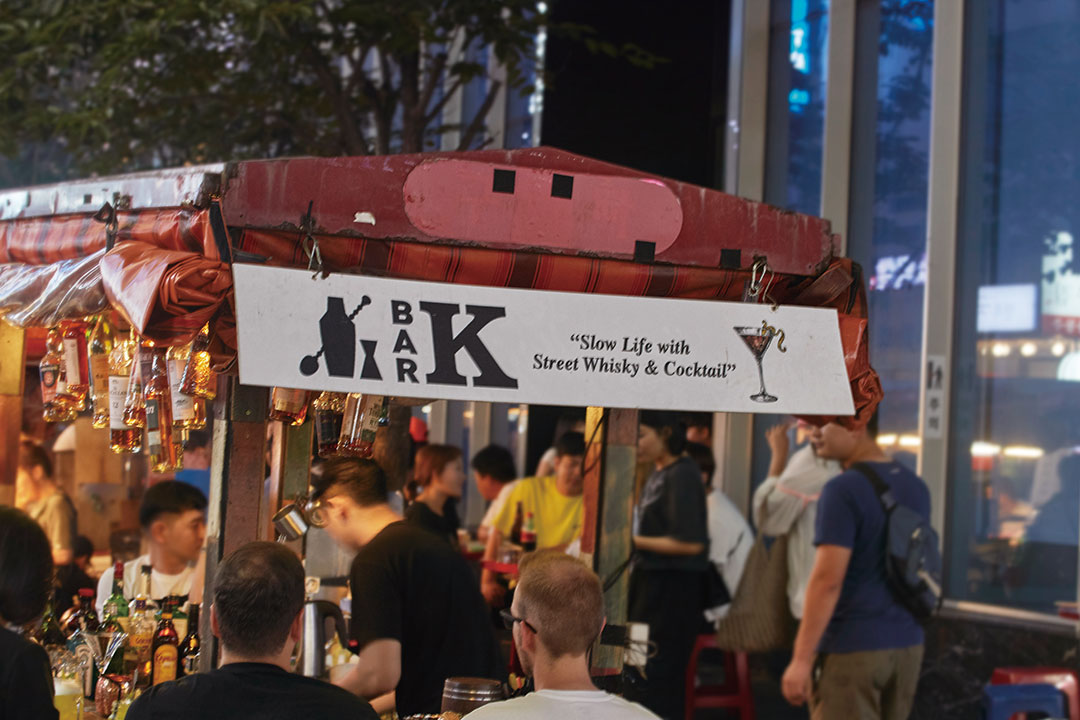 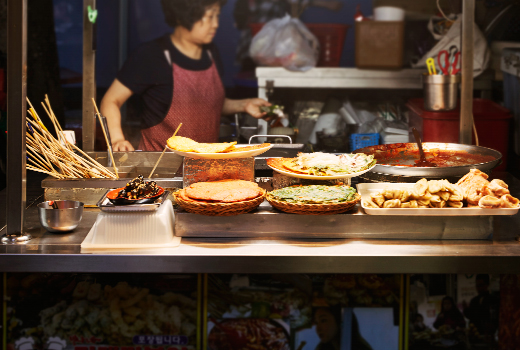 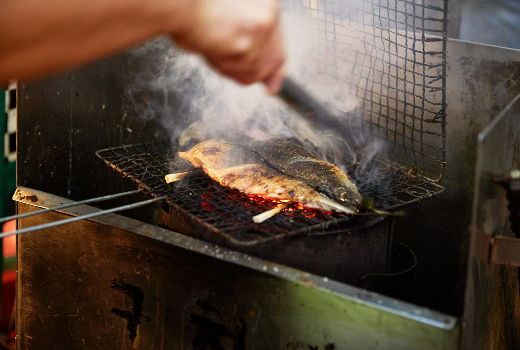 Stalls on Pocha Alley all serve different dishes, but the one thing they have in common is they're always jampacked. Signs at the top of the stalls are also fun, if you can read Korean. Some are named after famous buildings, such as 'The White House' and 'Gyeongbokgung.' Others include 'Golden Sunset' and '2 Outs in the Bottom of the 9th.' Wooden chairs at these stalls seem as old as the street on which they stand.
Grab a seat at one of the stalls on Pocha Alley in Busan's Seomyeon, and you will get a plate of cucumber pieces with 'ssamjang' dipping sauce for the starter. Generous cooks will serve up fried eggs or sausage. 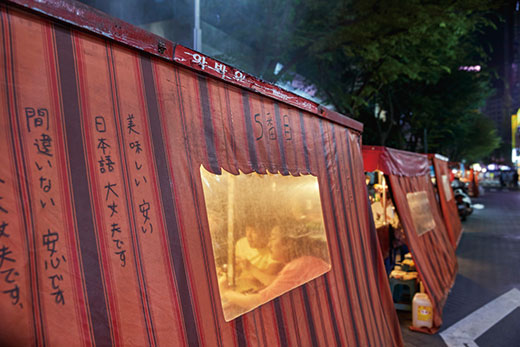 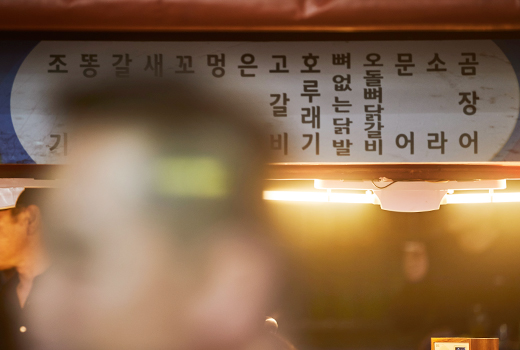 For the starter, you'll mostly get a complimentary plate of cucumber pieces with spicy dipping sauce called ssamjang. If you're lucky, you may also get fried egg and sausage, or fruits. You can order snacks tteokbokki (spicy, stir-fried rice cake), soondae (blood sausage) and some fried food, and or grab odolbbyeo (cartilage), chicken feet, eel and cockle. You can even take a seat at a cocktail stall, where locals and foreign tourists often mingle over cocktails. People from all walks of life gather on this Pocha Alley, all to sit back, enjoy a drink and feel a sense of freedom.

Address Gaya-dareo 772, Busanjin-gu, Busan, around LOTTE HOTEL BUSAN
Hours 5 p.m.~5 a.m.
Where to Stay in Seomyeon: LOTTE HOTEL BUSAN
LOTTE HOTEL BUSAN is a five-star hotel in Seomyeon, central Busan. With 650 rooms, it's the largest hotel in the city. It's about a 15-minute drive from Busan Station, and it takes 20 to 25 minutes if you take the public transit. From your room, you will get to enjoy the view of the beautiful Busan Port, and sleep in the comfort of the quality bedding system by He:on. Korean restaurant Mugunghwa will serve you dishes prepared with seasonal staples from around the country, while Japanese restaurant Momoyama sits at the very top of the hotel on the 43rd floor. 7Luck Casino reopened in September 2016 after renovation.
Address Gaya-dareo 772, Busanjin-gu, Busan
Phone +82-51-810-1000
Website LOTTE HOTEL BUSAN 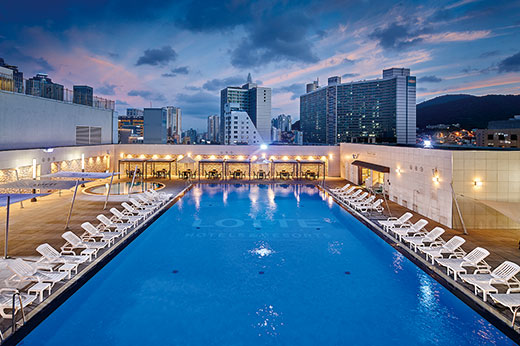 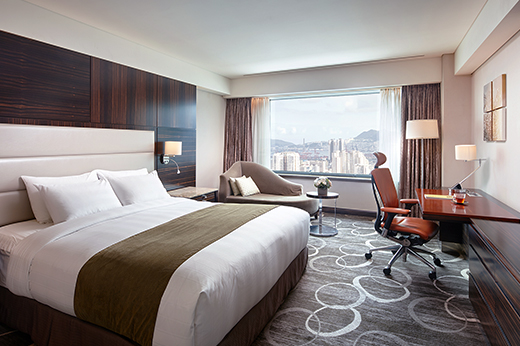