Kimjang and Kimchi, November Ritual
For Koreans, kimjang, or the making of kimchi, is more than just about preparing and preserving kimchi for the winter. We eat kimchi all year round and uses a wide variety of ingredients to make kimchi. We took a closer look at kimjang, listed as a UNESCO Intangible Cultural Heritage, and the significance of kimchi, which is the face of the Korean cuisine. 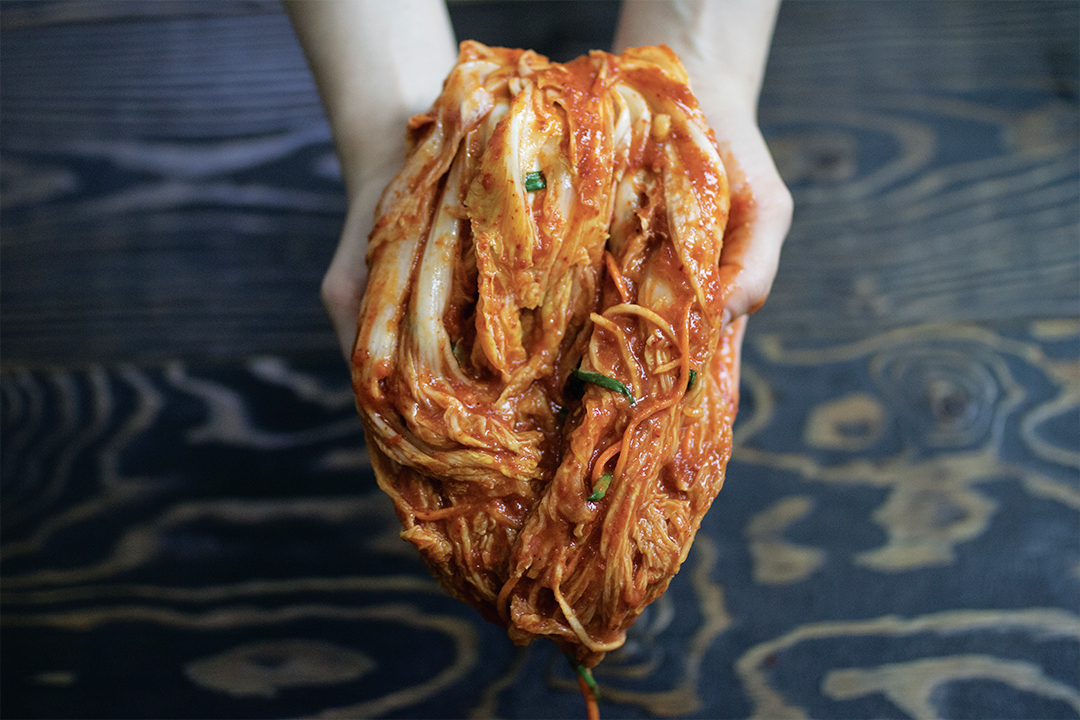 Do You Know Kimchi?
Kimchi is no longer some strange dish outside Korea. Kimchi has become a staple in the Korean cuisine, and popular YouTubers upload videos showing how to make it. The dish of fermented vegetables falls in line with the healthy eating habits adopted around the world.
So just when did we start eating kimchi? It originated in salted vegetable. The Korean word for kimchi is a variation of a Chinese word that means ‘soaking vegetable in salted water.’ In archeology, there are records of eating raw vegetables pickled in salt or paste. 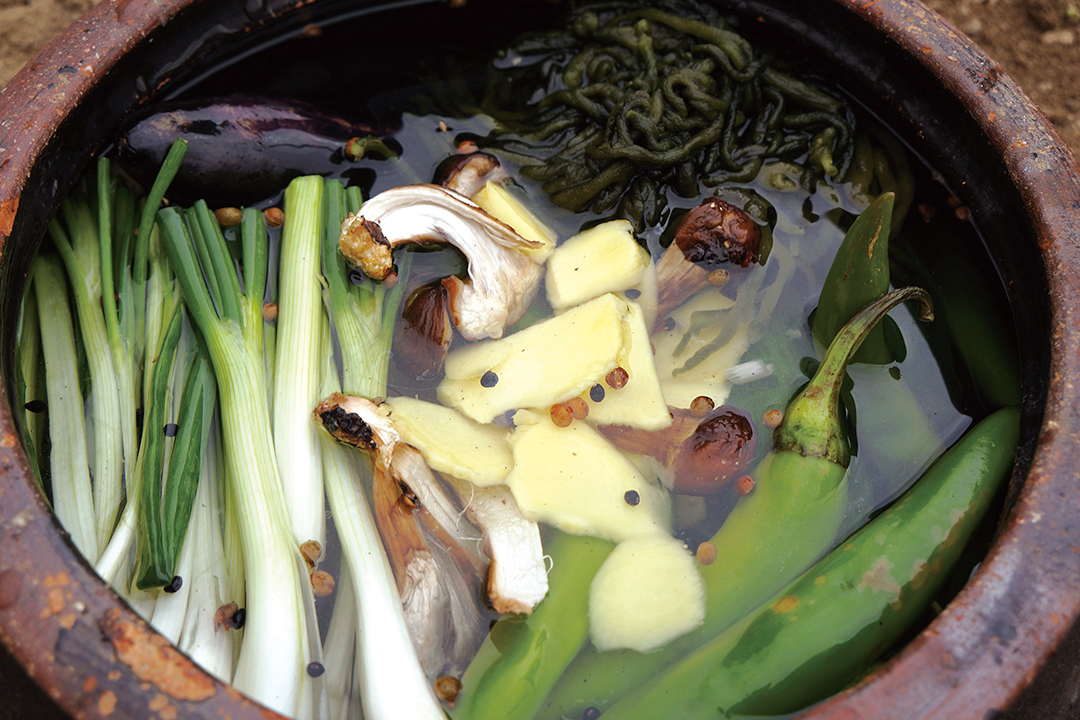 Kimjang began as a way to prepare for long winters. To preserve vegetables, fish or meat with a lot of water, our ancestors had to dry them or pickled them in salt. In Korea and others parts of East Asia where there are four clearly-defined seasons, fermentation culture is well developed. But there are differences in fermenting. In colder regions of China and northern part of Korea, vinegar, salt and paste have been used for pickling. In Japan, where it’s hot and humid, they use rice bran and other crop residue. Kimchi is a dish of salted vegetables such as radish, napa cabbage and cucumber, with seasonings of jeotgal (salted seafood), red pepper, green onion, garlic and ginger. Kimchi is the only vegetable dish that brings such distinctive taste and flavor through fermentation. 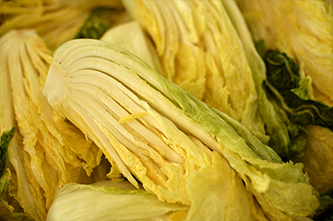 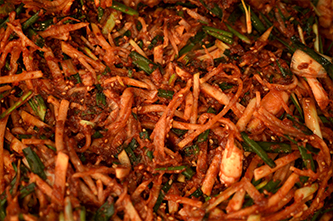 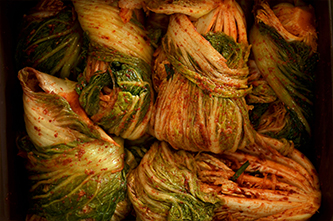 Ingredients for Kimchi
You’d mostly associate kimchi with the color red, produced by red pepper powder. But the history of red kimchi isn’t that extensive. The arrival of chili pepper in Korea, following the Japanese invasion of Joseon in 1592, started changing Korean cuisine. It replaced mustard and ground pepper as the go-to spice. The early form of kimchi, which involved soaking vegetable in salted water and adding ginger and madder, started to include chili pepper, too. But it wasn’t until 200 years later that chili pepper became the essential ingredient for kimchi. There’s a record of its usage as spice in “Jeungbo Sallim Gyeongje (Revised and Augmented Forestry Economy),” which was compiled in 1766 with King Yeongjo in power.
Sprinkling pepper powder and mixing it with vegetables became the norm in the 19th century, and it’s believed that this style of kimchi making became a national standard in the mid-20th century. The older style of kimchi that didn’t include chili pepper became baek (white) kimchi. Around the late Joseon period, napa cabbages of high quality were cultivated in Korea and became the main ingredients for kimchi, which allowed the style of kimchi we know today to take shape. 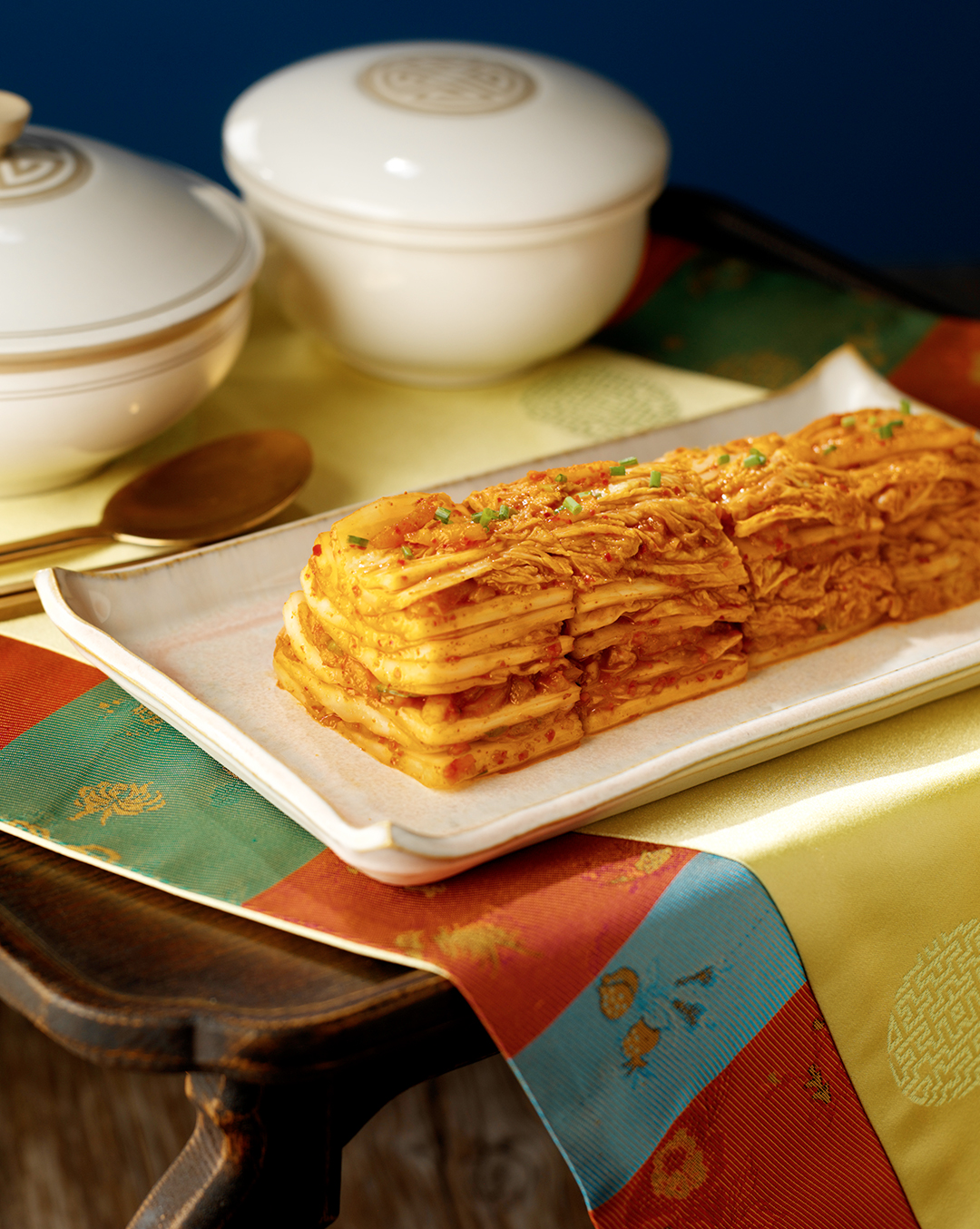 Kimchi took on different forms depending on region and living environments. The Hamgyong region near the East Sea had squid and pollack in kimchi, rather than jeotgal. The Pyongan region is famous for putting in boiled pheasant meat in its kimchi. Gangwon Province makes the use of ingredients from its mountains or oceans, such as deodeok herb and squid. The hot Jeolla areas in the south use jeotgal and pepper paste for strong flavor. These localized kimchi can be a source of civic pride for the locals. And the taste of kimchi you had growing up can conjure up feelings of nostalgia later. 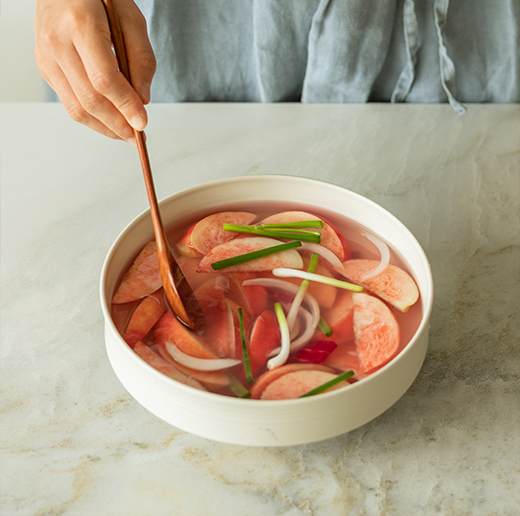 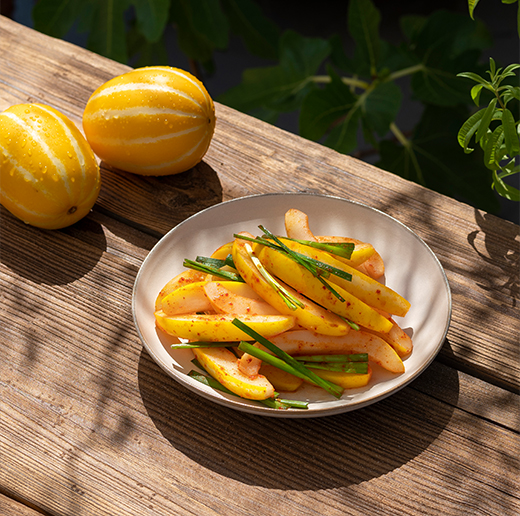 Koreans’ Favorite Dish
In May, Gallup Korea polled 1,700 men and women over the age of 13 about their favorite Korean food. Kimchi jjigae (stew) ranked No. 1, and kimchi finished fourth. At the heart of kimchi jjigae is obviously kimchi. The survey result essentially means kimchi is Korean people’s favorite food. And according to another poll done by the Cultural Heritage Administration in 2011, 95 percent of the Koreans eat kimchi at least once every day.
There’s even a saying that Koreans make every food with kimchi, such is the variety of the dish. The Instagram page for ‘Museum Kimchikan’ features recipes on traditional kimchi made with burdock and eggplant, and also uploads recipes on kimchi using fruits, such as peach and watermelon. For the most part, Koreans eat napa cabbage kimchi. It’s supposed to be consumed in winter time. Our forefathers made kimchi with napa cabbage picked in November and ate it until early spring. That was kimjang kimchi. The other main type of kimchi is seasonal kimchi. Oisobagi (cucumber kimchi) and yeolmu (young radish) kimchi fall in that category. People eat them mainly in spring and summer, and you eat them as soon as you make them, without preserving them for too long. 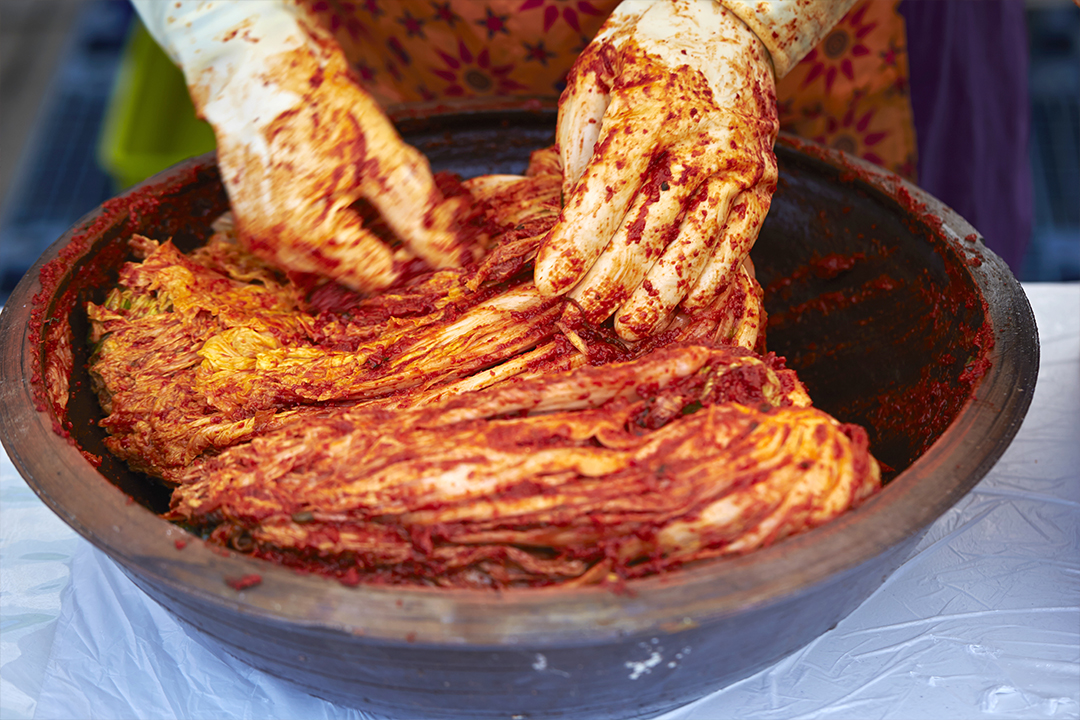 Kimjang as Intangible Cultural Heritage
A typical Korean household spends November weekends making kimchi. Children who’ve left their parents come home in November to join the annual event. Kimjang refers to making napa cabbage kimchi and dongchimi in mass amounts in late fall in preparation for winter. Kimjang requires a lot of work, and it usually ends around late November or early December. In 2013, ‘kimjang, making and sharing kimchi,’ was listed as a UNESCO Intangible Cultural Heritage. It was the act, not the food, that was recognized.
UNESCO acknowledged the culture of kimjang as an important part of the Korean culture and explained, “The collective practice of Kimjang reaffirms Korean identity and is an excellent opportunity for strengthening family cooperation. Kimjang is also an important reminder for many Koreans that human communities need to live in harmony with nature.” Indeed, a lot of children learn about kimchi and kimjang at school, and local communities hold large kimjang events and donate kimchi to those in need. 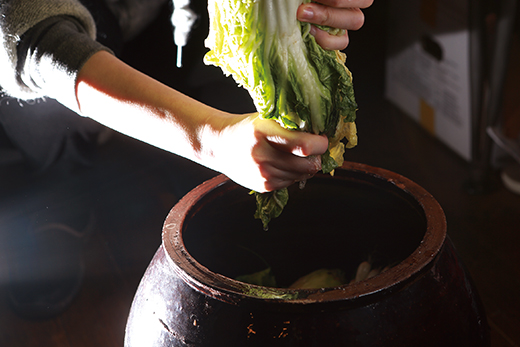 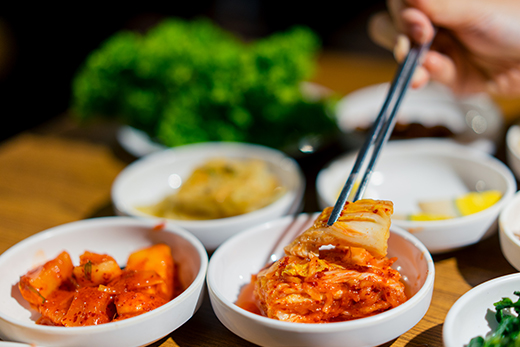 Try picturing this scene of kimjang. At one corner is a stack of napa cabbage pickled in salt for days. In the middle are vegetables plus spices, jeotgal, nuts, fruits and fish mixed with chili pepper. And people rolled up their sleeves and jump into the action. And when they near the end, a huge plate of boiled pork will arrive. Kimjang isn’t complete until you finish it off with pork wrapped in pickled cabbage and sauce.
Experiencing Kimjang and Tasting Kimchi
Museum Kimchikan in Insadong is the first museum dedicated to kimchi, built to help foster research into the kimchi culture and spread its findings. You can sample different types of kimchi and even try making them yourself. Exhibits will tell you about the history of kimchi, its different types, fermentation and kimjang culture. You can sign up for a program on making whole napa cabbage kimchi and baek kimchi. Visit the museum’s website for more. 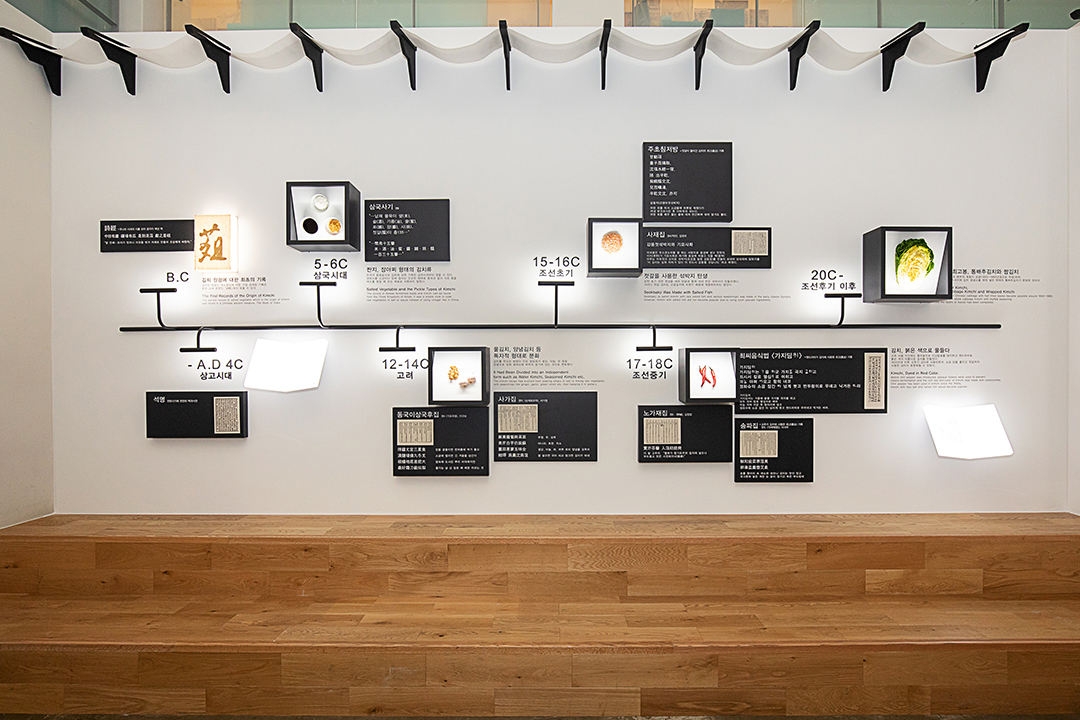 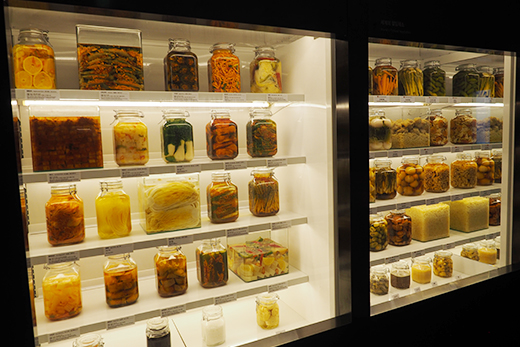 In addition to kimchi, other types of pickled vegetables served around the world are on display. © Museum Kimchikan 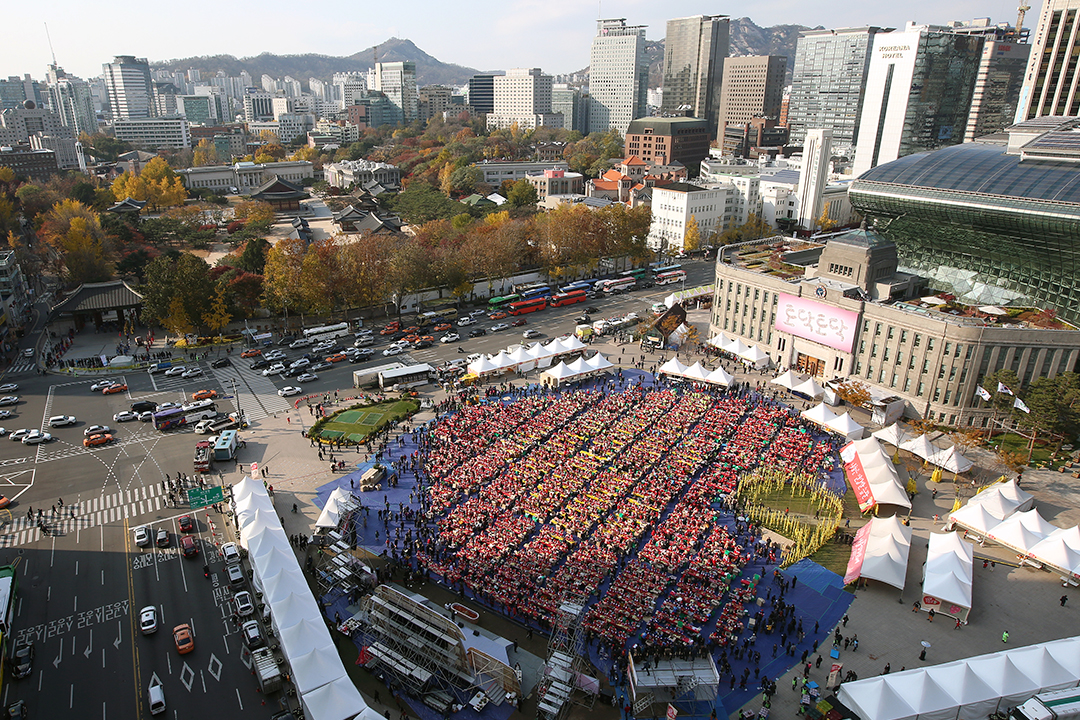 Seoul Kimchi Festival, held annually at Seoul Plaza in November. This year’s fest will run from Nov. 1 to 3.

Learning More about Kimjang and Kimchi
If you’re interested in looking deeper into the history of kimchi and its recipes, these two books will be helpful. “Kimchi Gyeonmunrok” was co-written by Kim Man-jo, who began her study on kimchi in 1950 and dedicated half a century to her research on the dish. The book details kimchi’s history, culture, philosophy and custom, and tells the story on the act of making kimchi (preparing ingredients, pickling cabbage and burying kimchi underground) and on vegetables used in kimchi from a humanities perspective. 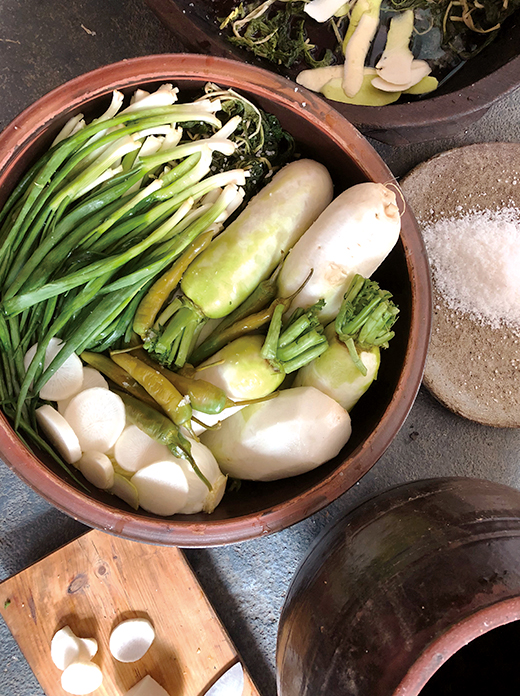 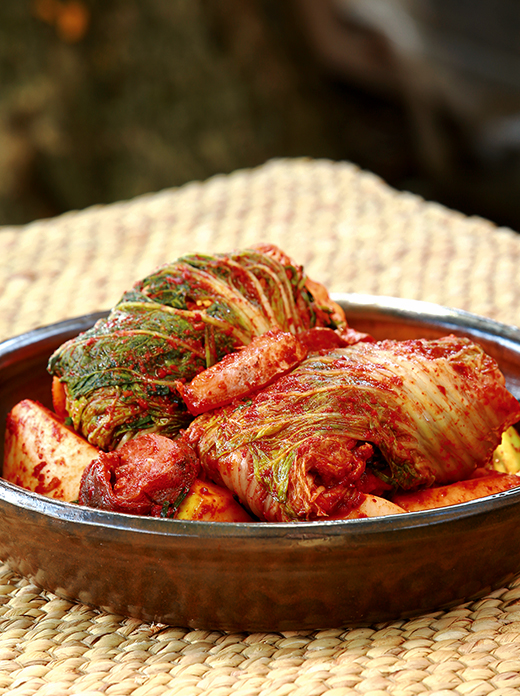 “The Story of Kimchi by Joseon Chef Seo Yu-gu” provides you with recipes on traditional kimchi. It features 40 vegetable dishes initially documented in “Jeongjoji (Food and Beverage)” written by Seo during King Yeongjo’s reign, and also offers recipes on 24 modern types of kimchi, such as tomato kimchi and fruit kimchi, based on traditional kinds, complete with photos.