Contemporary Tteok at Haap
If you want to offer a taste of traditional Korean desserts to foreigners visiting Korea, you should head to Haap without hesitation. Tteok bakery Haap is one of the trendiest places in Seoul, selling tteok and hangwa that are both traditional and contemporary.
Travelers are always hungry, and it is no easy task to find good eats at an unfamiliar location. If you’ve come to Haap to experience tteok as a Korean traditional dessert, you are in luck. The Jongno district in Seoul is an area where you can witness the most Korean scenes in the city, and the Wonseo branch of Haap sits on the second floor of a glass-paneled building neighboring Changgyeonggung Palace. Owned by chef Sin Yong-il, who used to work at tteok shop Jihwaja, trained in bakery and confectionery at École Lenôtre in France, worked in the kitchen of the Korean Embassy in Switzerland, and held the head chef position at Korean restaurant Poom, the Haap bakery is where you can always expect to discover something new about traditional Korean sweets. 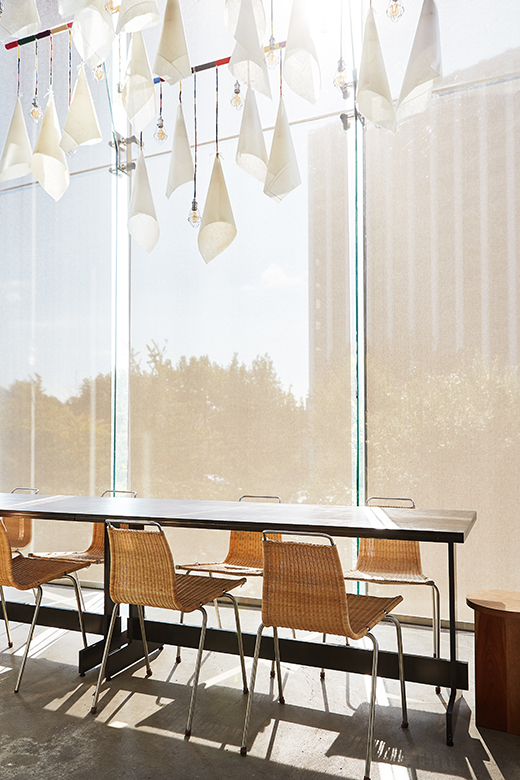 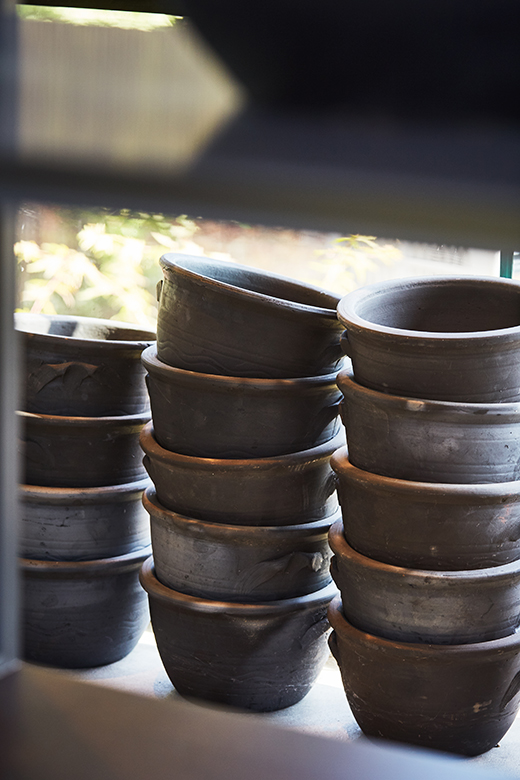 “People seem to think I started the tteok shop out of the blue. In fact I have always had ideas about the kind of tteok I want to make and the ways to make it. It’s been a constant mind training for me.” 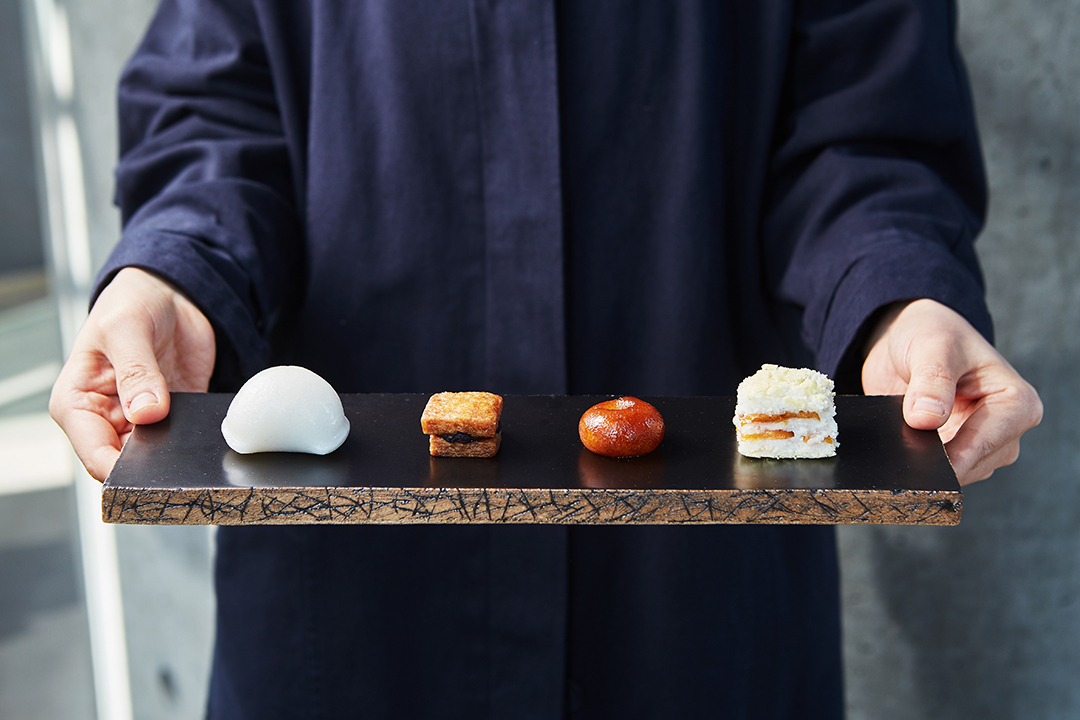 Chef Sin has raised the bar for traditional Korean desserts using the knowhow he gained through the unique career experiences and the modern cooking techniques he learned in France. “It was hard to find information or resources about new types of tteok in Korea. Rather than looking for answers here, I decided to learn it in France, a frontier in dessert making. After France, it was up to me to figure out how to apply the basics I learned there.” He uses western confectionery and bakery tools to get consistent appearances and flavors of his products by accurately adjusting moisture, temperature, and standards. For instance, Korean yakgwa is meant to be oil-fried but he oven-bakes it for a less greasy flavor. He also uses seasonal ingredients unique to Korea. Last fall, he used persimmons to showcase two new menus. He’s used chocolate, olives, or cheese that he likes to eat as ingredients for tteok and yakgwa. His tteok often features sweet potatoes, sweet pumpkins, corn, or yuja as the main ingredient for his products that maintain the unique flavor of each ingredient. 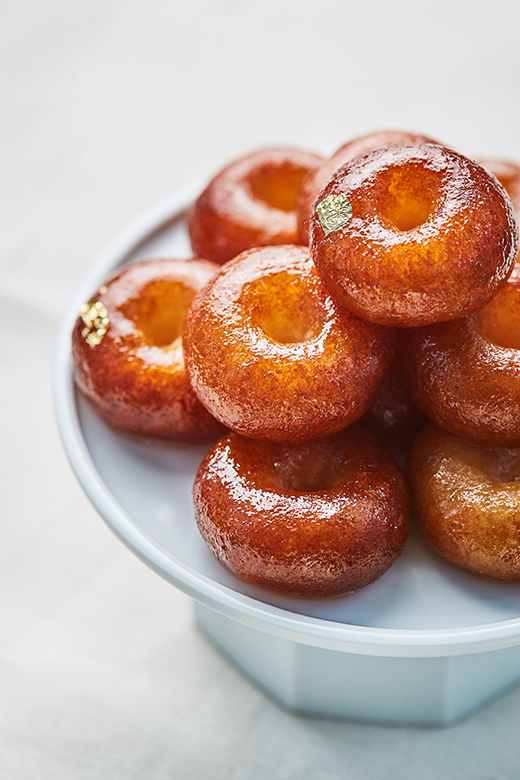 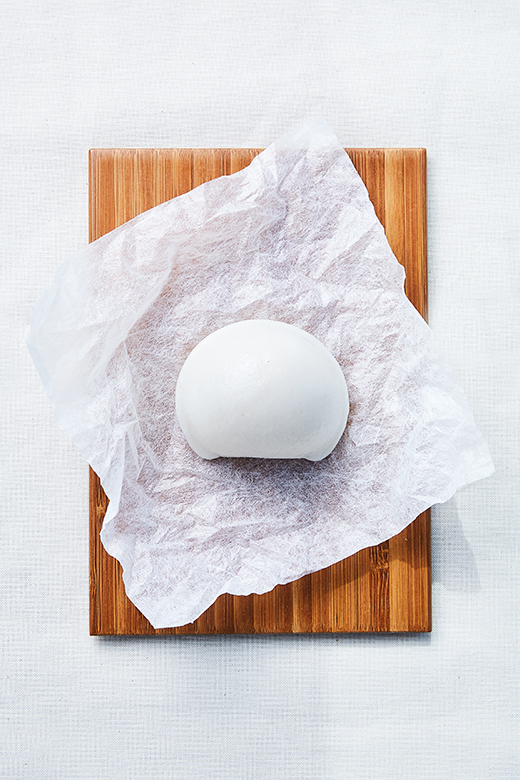 The soft and chewy baramtteok, with white bean-paste fillings inside. 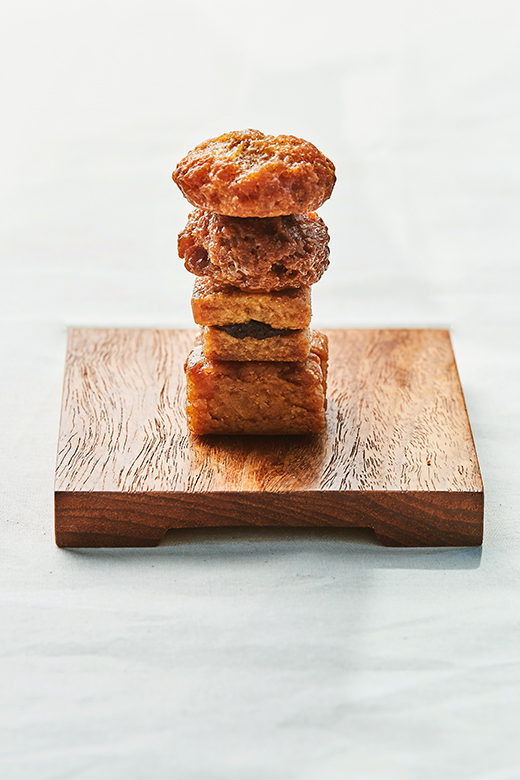 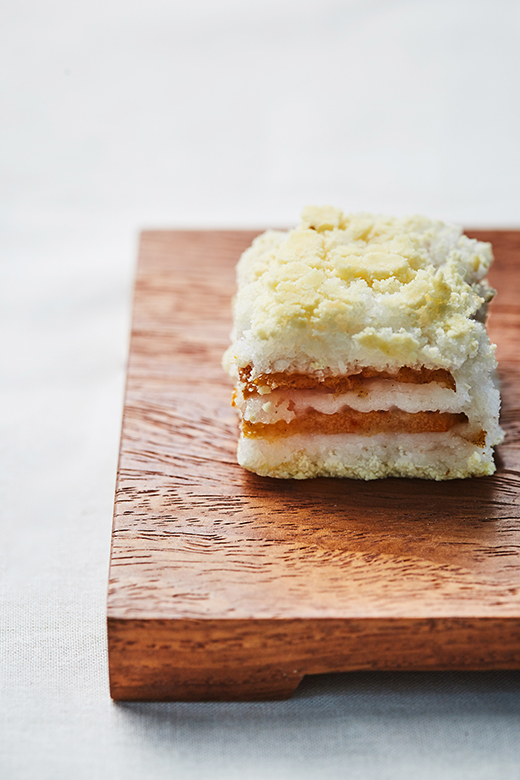 With the millenials leaning towards choosing more “instagrammable” menu items and interiors when they spend money, Haap pays attention to its presentation of tteok. Individually-wrapped in a piece of white paper, a bite-sized tteok, yakgwa, and juak look different from those sold at a run-of-the-mill tteok shop. Before launching Haap, Sin took time to think about the value of his tteok.
“When I said I would charge 2,000 won for a small piece of tteok, people warned my business won’t last long. They predicted I would have to lower the price, and I still charge the same amount, nine years later. I’ve always thought it was the right price point. Otherwise, I would have been a swindler. I think my pricing was based on my experience living overseas and paying for desserts. The time in France taught me how to use techniques and create flavors. It also gave me a sense of how to price desserts like tteok and to have customers see the value.” How he chooses ingredients and makes tteok is not just for the look of it. That’s been shown through numerous customers he’s had since the opening of Haap in 2010. 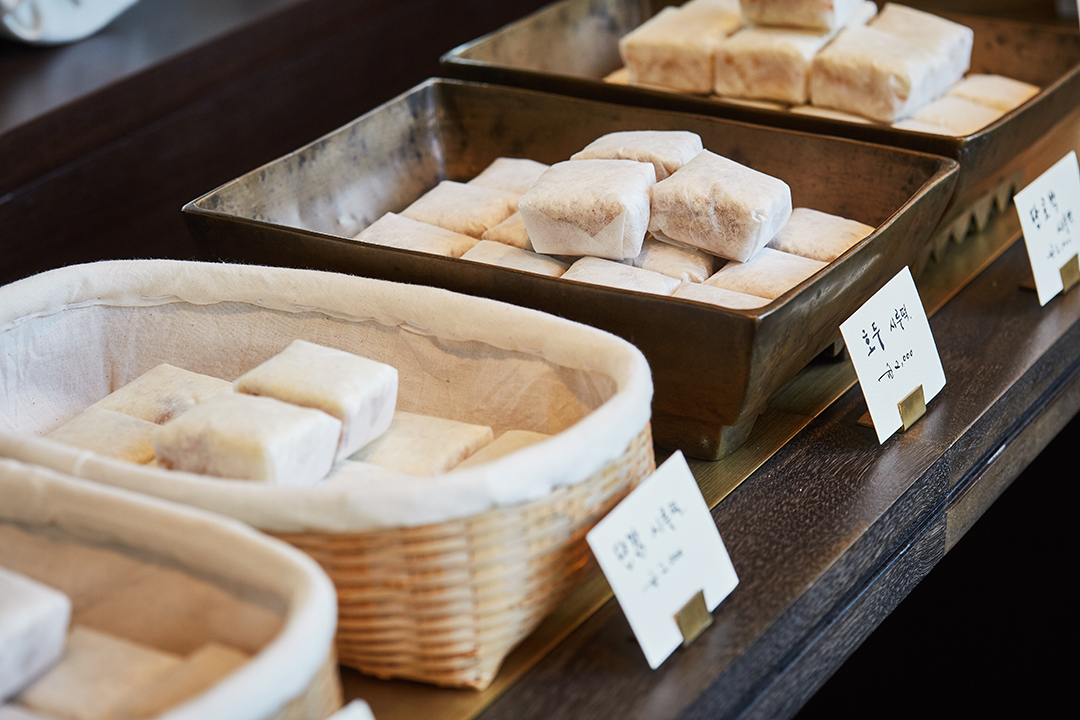 “Many Asian countries live on rice, but only Korea uses rice to create various tteok and develops that culture. Making traditional sweets and tteok seems meaningful for the global community as well.” 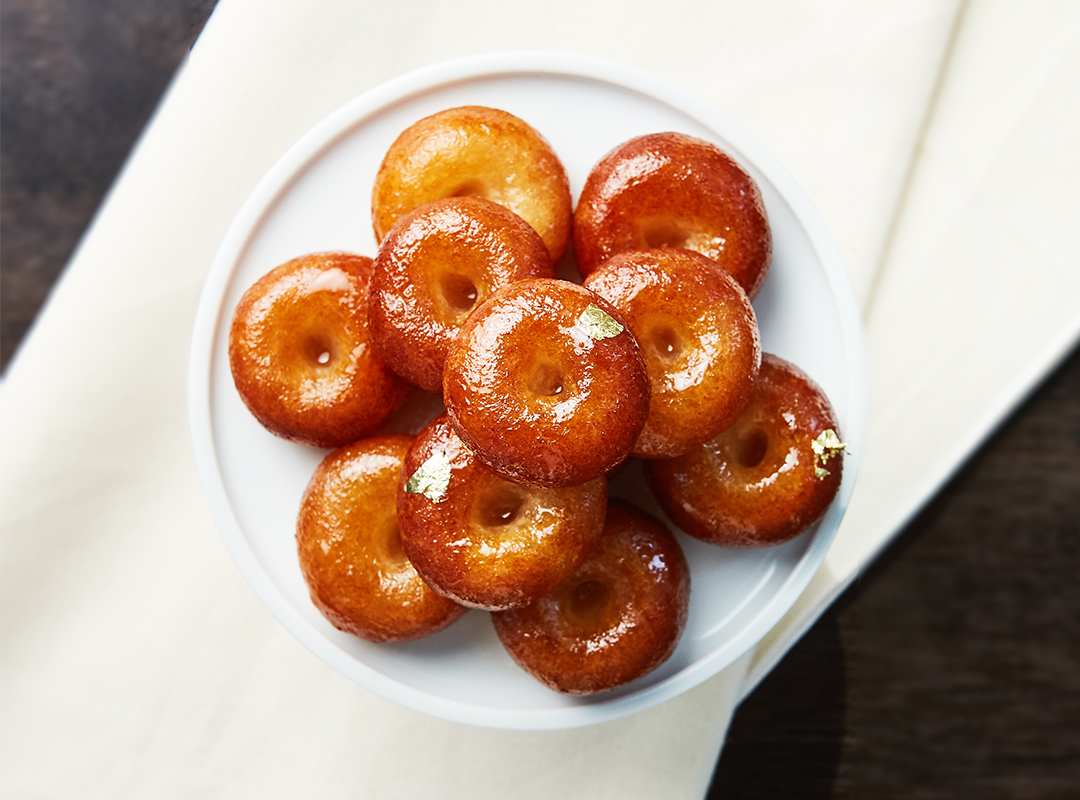 Sin wanted to offer a future path for tteok through his selection for the Haap menu and now dreams to make dessert souvenirs for tourists visiting Korea, using hangwa. (Hangwa has a longer shelf life than tteok.) He’s envisioning a dessert set that foreigners can buy easily at the airport on their way back home. “Seeing the first tteok shop I’ve worked at closing, I decided to open my own one day. Making tteok is like homework to me. If I had started the business out of my love for tteok, I would have quit a long time ago because of boredom. Having started it, I feel like I must see the end of it.” He said his final goal is in the hangwa set that could be a souvenir or a gift, but the future he has mapped out for traditional Korean desserts as a tteok designer, may be a step further. 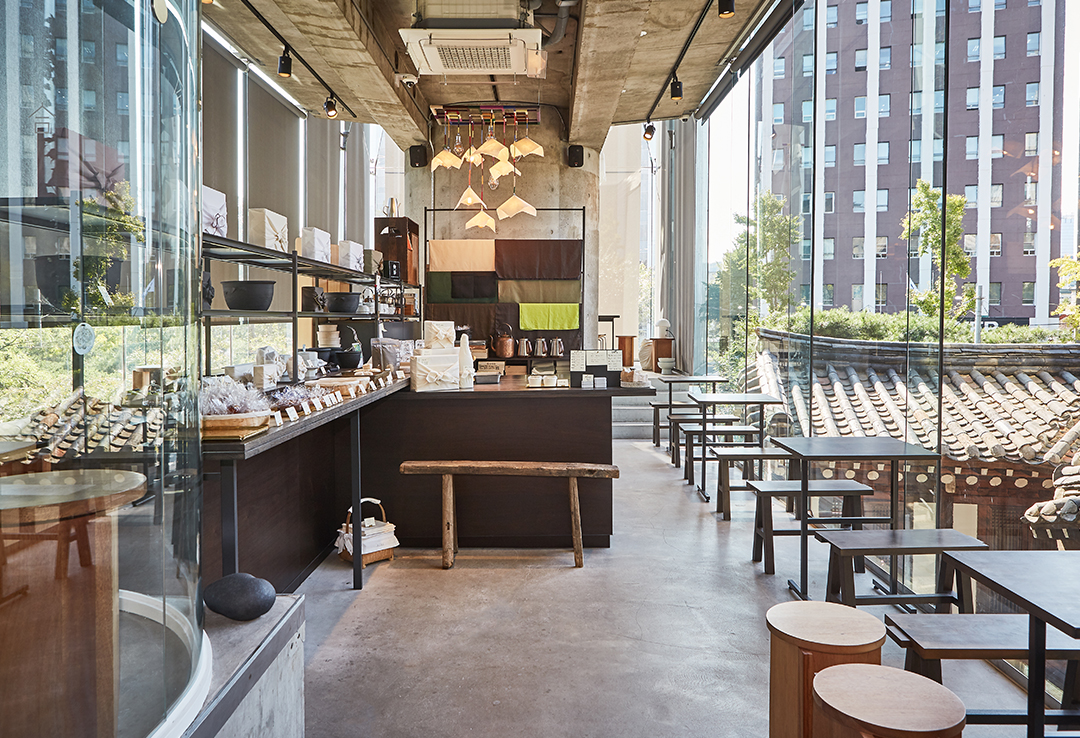 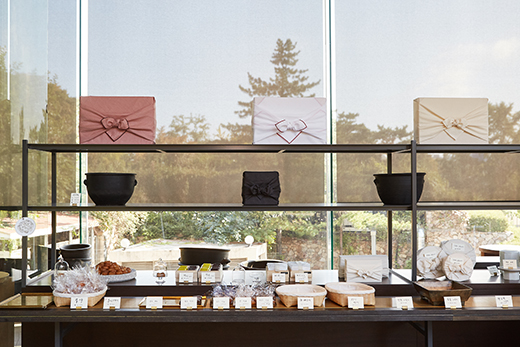 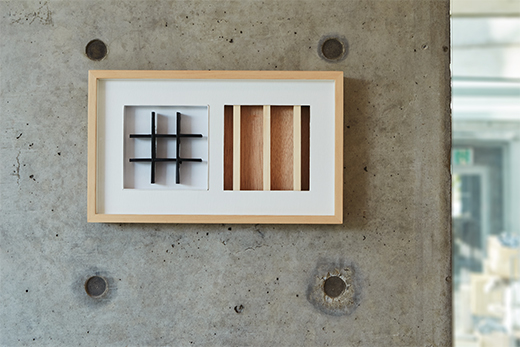 A present from Arario Chairman Kim Chang-il, a frame made of paulownia tree box from Haap

The Wonseo branch of Haap is located on the second floor of the Arario Museum in Space, which is a former “SPACE Group Building,” a masterpiece of Korean modern architecture, and office space for now-deceased architect Kim Swoo-geun. The two buildings are connected via a bridge, with the black brick building housing the museum and the five-story glass building a restaurant and a cafe. What Sin focused his attention on while deciding on the interior of Haap was whether it had a fantastic view of the outside. He had the tables and chairs made shorter and the backs of some chairs removed to secure the view of a hanok mansion, sitting between the two buildings. Thanks to that, the place is filled with not chairs, but views. Walking into the tteok shop, you will see Changgyeonggung Palace on your right, and the hanok on your left. The decor items used at the shop all have meanings. The huge hanji chandelier hanging from the ceiling was gifted by Korea’s first-generation stylist Seo Young-hee, and the wooden frames on the wall were made by Kim Chang-il, founder of Arario, who is also an art collector and writer using the alias CI KIM, repurposing the paulownia tree box available at Haap. Whichever direction you might turn to, you get to enjoy various flavors of tteok here with a beautiful view.
A Day in December to Eat Patjuk
December 22 is dongji in Korea, one of the 24 solar terms and winter solstice. On this day when the night is the longest and the day is the shortest in a year, our ancestors believed patjuk, red bean porridge, fends off baneful spirits. At Haap, you can taste patbingsu(shaved ice with sweetened red bean paste) in summer and patjuk in winter. This year, the chef added tarakjuk(milk porridge) mixed with patjuk to the menu. It’s a Haap specialty. A warm, filling dongji patjuk meal will help you stay healthy in this cold winter season. 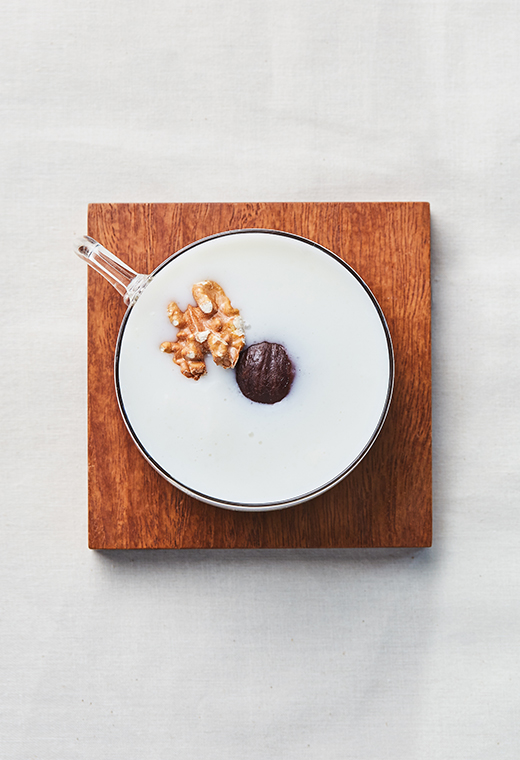 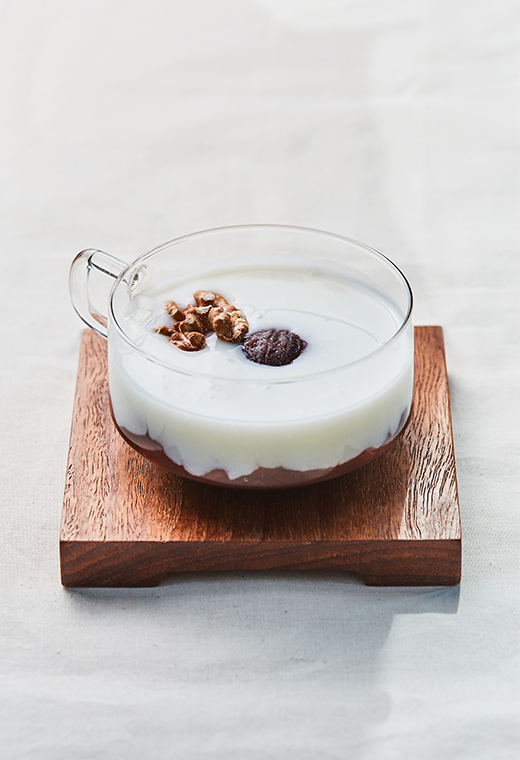