Land of Tea, Russia
In discussing tea, people often think of England or France, but the real origin of tea in Europe is Russia. From its unique teapot called samovar to diverse snacks and teas, let’s look into the extraordinary tea culture of Russia.
The end and beginning of the year are treated much more specially in Russia compared to other European countries. Russians celebrate Svyatki, equivalent of Twelve Days of Christmas in the Russian Orthodox Church, as a major winter holiday. From December 25 to January 5, people visit their families and friends, play traditional games, and have their fortunes read. Children go around houses in town singing Christmas carols. During the Svyatki in Russia, people gather in Izba(a traditional Russian house), share snacks, and have conversations, while drinking tea from samovar. 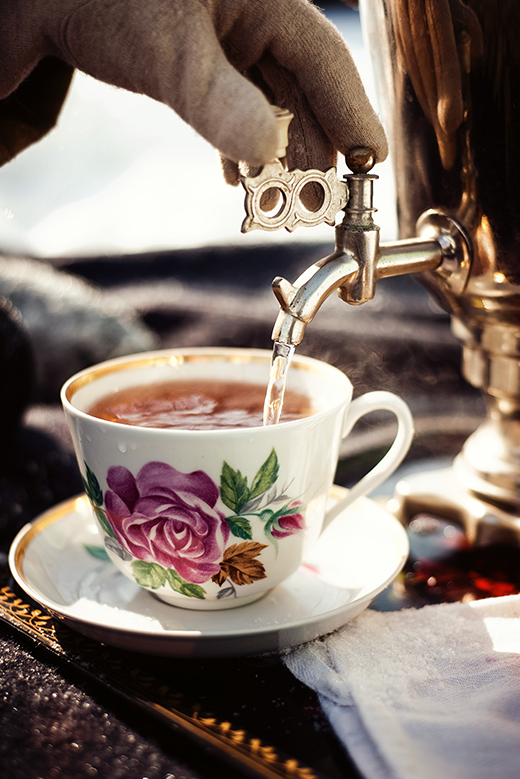 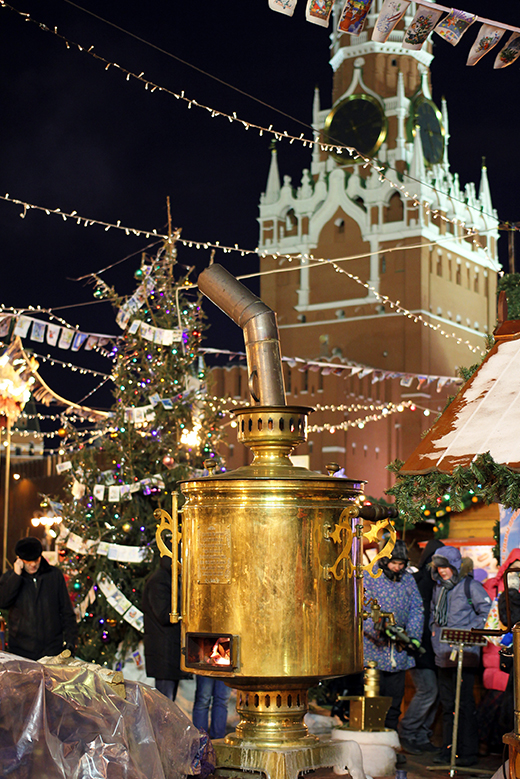 Origin of European Tea Culture
Russia is famous as a tea-loving nation. People commonly think of England or France in regards to tea culture, but Russia has a long history of tea culture as well. For instance, in a 2014 survey on “The Countries That Drink the Most Tea” by a U.S. magazine , Russia ranked fourth, consuming an average 1.4 kilograms per person. For reference, Turkey topped the list, drinking an estimated 3.13 kilograms of tea per person. The U.K. came in third, and France didn’t even make the top 30.

Russia’s tea culture was able to develop largely because of its geographical proximity to Asia. Russia’s long friendship with China particularly contributed to the expansion of tea culture in the nation. In 1618, an ambassador of Ming(China) to Russia presented several chests of tea to Tsar Michael I Fedorovich. That’s the beginning of the Russian interest in tea. (In the case of England, tea was introduced in the mid 17th century by Dutch traders.) Interestingly, there’s a theory claiming that tea was first invented in 1610 in Chinese Fujian region. Assuming that’s a valid theory, Russia may be the first country to have brought in and tasted tea in all of Europe. 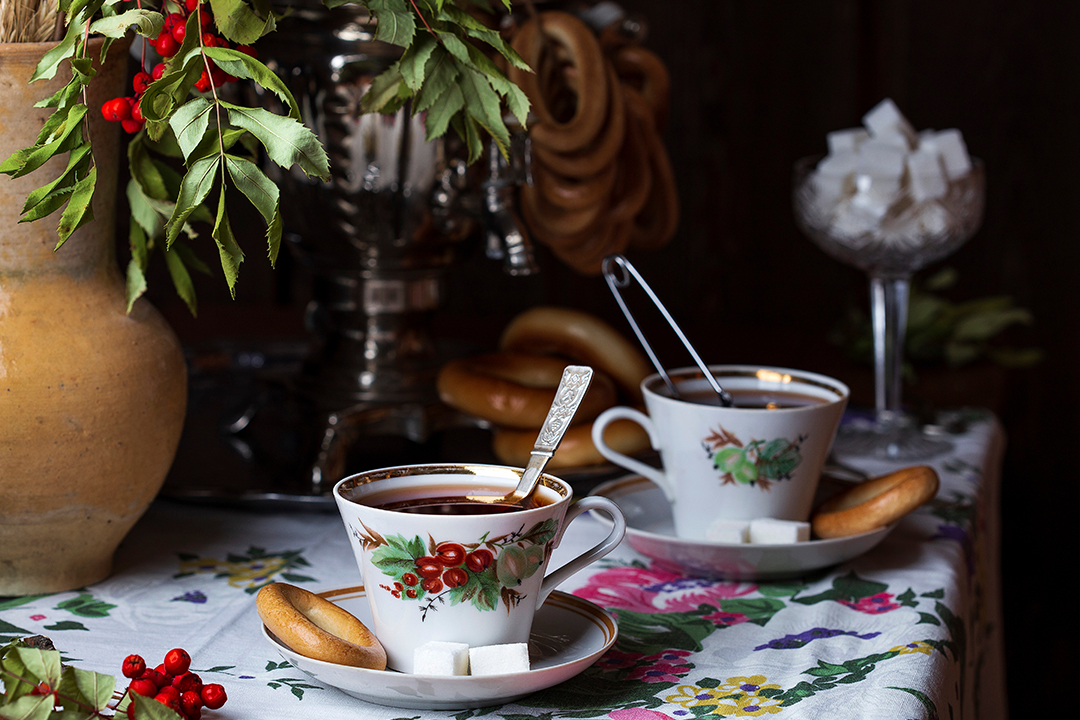 Since the 1727 signing of the Treaty of Kyakhta, Russia and China formed an official trading partnership, and Russian peddlers started buying tea in bulk from China, spending months on the 6,000-kilometer-stretch of the Silk Road. “Russian Caravan” tea was inspired by the tea that those peddlers had on their camel caravans. Russia in medieval times was the center of tea culture, along with England. In fact some people say that Queen Victoria popularized drinking tea with a slice of lemon in it after the Russian court served her tea in that way. Since then, a tea with a slice of lemon in it is known as “Russian tea” in England. 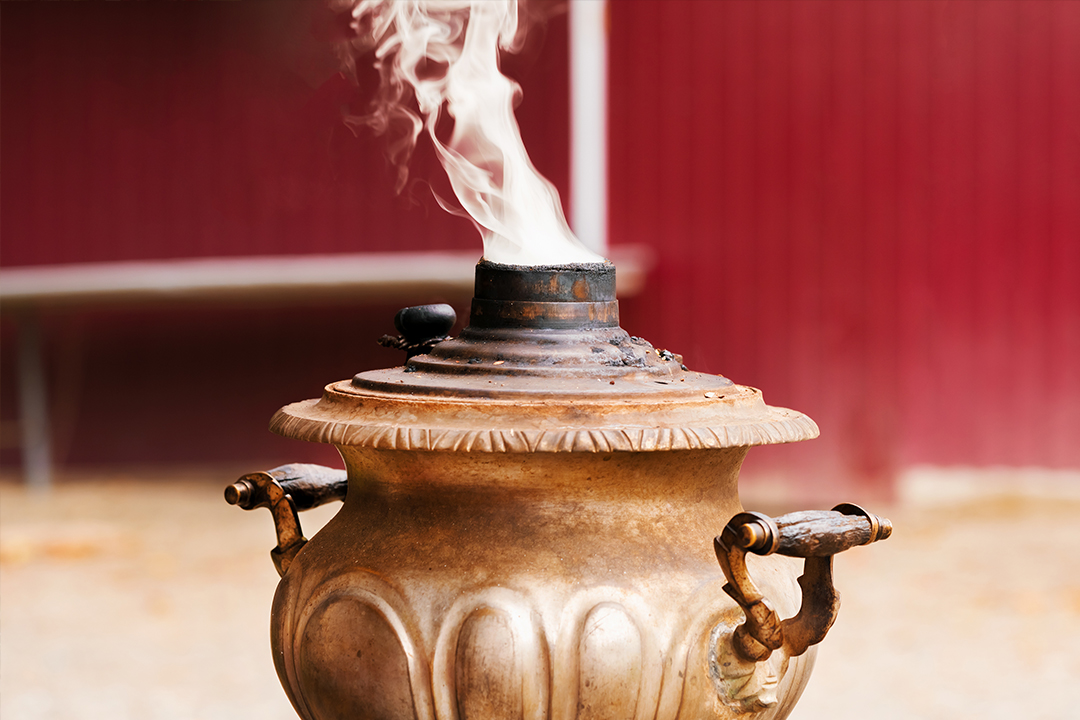 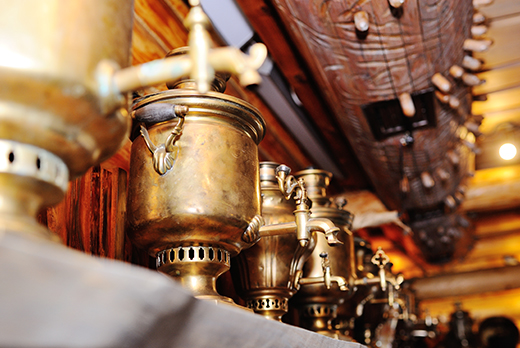 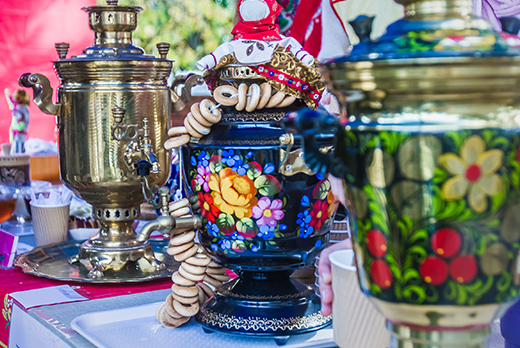 Samovar, Symbol of Russian Tea Culture
Russian tea culture is best represented by the ornate, unique teapot called samovar. The traditional teapot was a must have in a Russian household. The embellished piece of kitchenware cost 5-10 ruble in the 19th century, almost amounting to a monthly salary that a laborer would get in Russia, but each household owned at least one samovar. Despite the popularization of teabags, Russian households or market vendors still display flashy samovar.

There are diverse kinds of samovar. Some small models look like a regular teapot, but a traditional samovar intended for use at home has a tap, and its capacity could reach up to dozens of liters. Inside samovar, there is a fuel section and a steam vent, enabling you to put in firewood and boil the water directly. These days samovar uses electricity, but some people prefer the traditional method of brewing tea. Another characteristic of samovar is its embellishment. Russians use a shiny copper body on which they engrave flowers or vines, or even a Russian-style drawing to maximize its extravagant appearance. 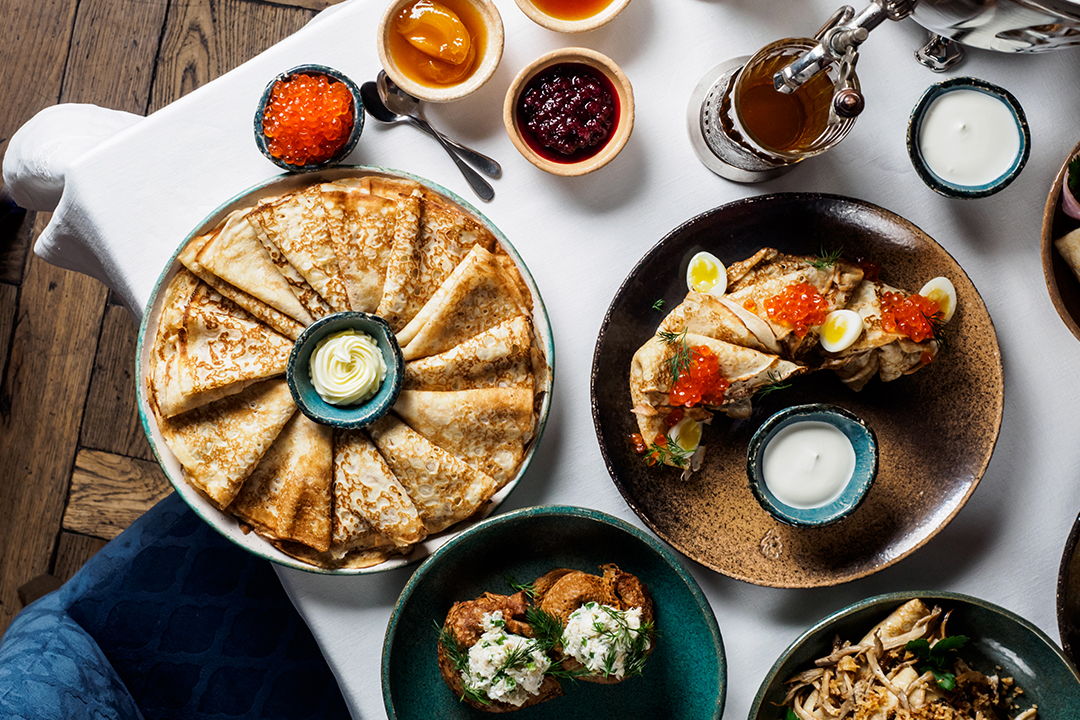 When Russians drink their tea, they like to have a full table with tea confectionery and jam like afternoon tea in England and fika in Sweden, rather than just enjoying the flavor and scent of tea itself. For confectionery to eat with tea, Russian pancake blini or Russian pie pierogi are popular choices. Pierogi is either savory or sweet. Savory pierogi is cooked with pork, chicken, cabbage, and peas, while sweet pierogi is made with fruit jam, honey, and nuts.

Sometimes strawberry jam and honey replace confectionery to be had with tea. One thing to be careful in this case is that you shouldn’t put jam in the tea. The Russian way is to have a sip of tea and then have a spoonful of jam. If you don’t have jam or honey, you can dip a cube sugar in the tea and nibble on it, which will soften the bitter taste of tea. 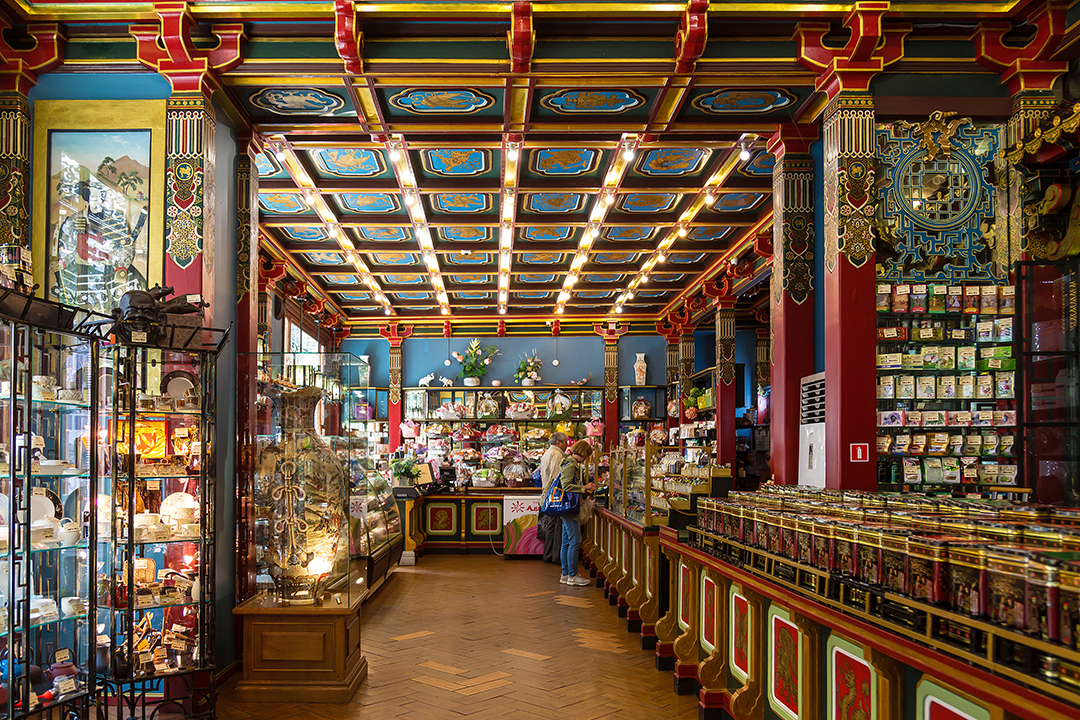 Moscow Has Chinese-Style Tea House
In Moscow, there is a famous tea house that symbolizes the tea culture of Russia. It’s Perlov Tea House built in the late 19th century. A successful tea merchant named Sergei Perlov had this building constructed to impress Chinese ambassador Li Hongzhang(Li didn’t stay there) during his visit. The exterior of building resembles a traditional Chinese mansion with embellished pillars and roof tiles, while the interior is filled with various Asian-style wall paintings portraying carp or phoenix and is decorated using a red and gold color scheme. Various types of teas are on display in a Chinese antique furniture piece in the tea house, and related products including confectionery and teapots are on sale. It is a popular tourist destination in Moscow. 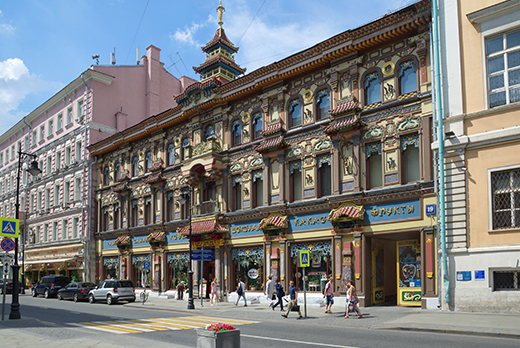 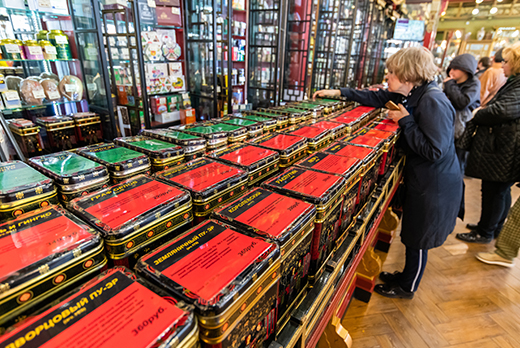 These days you can enjoy some Russian tea culture in Korea. The most popular items are Greenfield, Russia’s leading tea brand with a long history, and Imperial Porcelain, known as the royal porcelain maker. Imperial Porcelain is in fact more familiar to Koreans as Lomonosov. In 1744, Catherine the Great (or Empress Ekaterina II) sponsored the launch of the Imperial Porcelain Factory. It was renamed as the Lomonosov Porcelain Factory in 1925 to celebrate the bicentenary of the Russian Academy of Science founded by Mikhail Lomonosov. How about drinking a dark tea in a Lomonosov teacup with its signature ornate blue patterns and the gold rim, along with some fruit jam like Russians? Imagine yourself dressed as a Russian aristocrat. 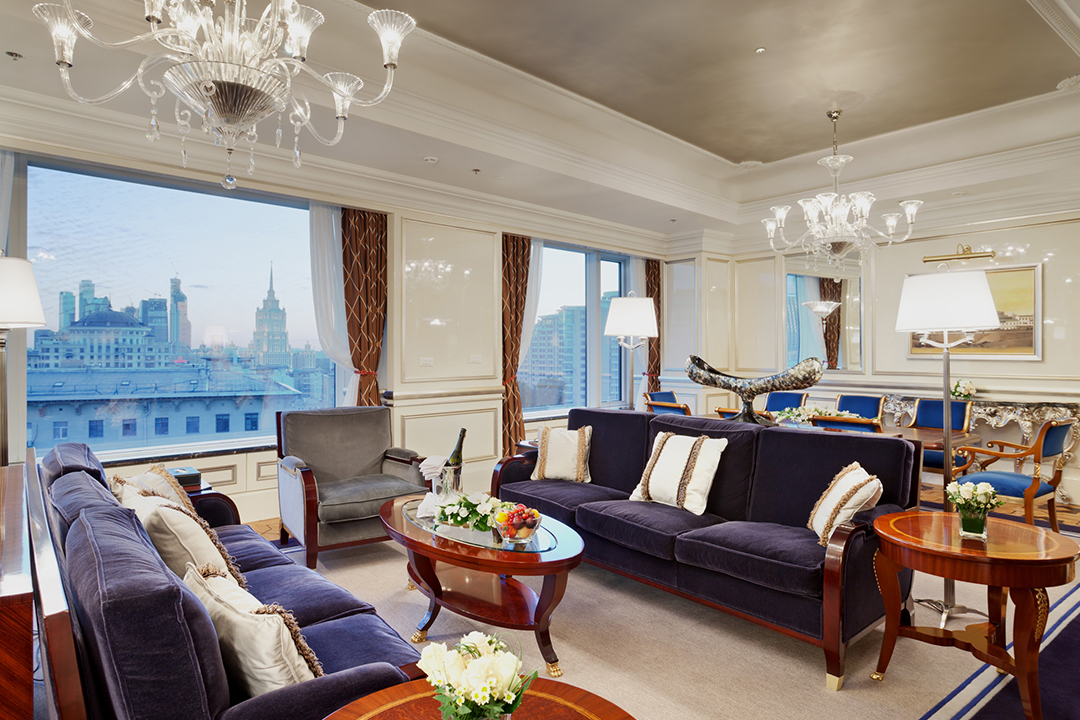 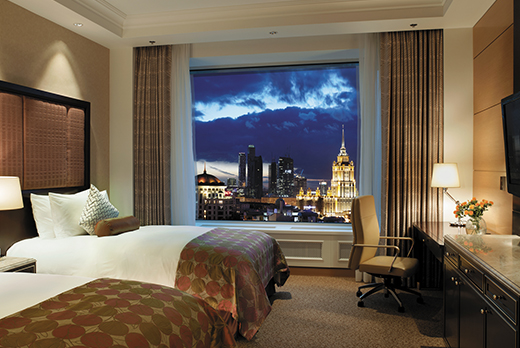 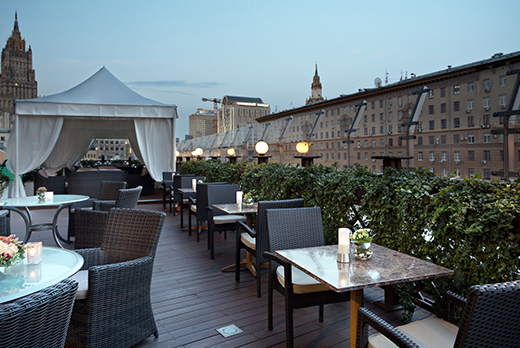 Where to Stay in Moscow: LOTTE HOTEL MOSCOW
Opened in 2010, LOTTE HOTEL MOSCOW is located on New Arbat Avenue, which is a center of finance and shopping and also close to the Red Square, the Kremlin, and the Bolshoi Theatre. Its 300 guest rooms, offering a view of Moscow’s popular destinations including the Kremlin from inside, are decorated with uniquely-Russian color schemes and elegant details. It presents diverse dining options, such as “OVO by Carlo Cracco” run by the eponymous, two-Michelin-starred chef and MEGUmi, a New York-style fusion Japanese restaurant. For top-quality relaxation and therapy experience, the hotel suggests visiting Mandara Spa.