Vietnamese Noodle Road
This is the ultimate guide for Vietnamese pho and where to find. We have you covered on everything about the noodle soup, from the world’s most delicious pho to eel pho and snail pho, among other exotic dishes, and just where to find them.
There’s an old Vietnamese proverb, “An bac, mac nam.” It means to head north to enjoy good food and travel south to see fashion. The Vietnamese cuisine has captured the world’s imagination, and the local pride is particularly strong for the northern cuisine. And Hanoi, the Vietnamese capital, is the top destination in northern Vietnam. 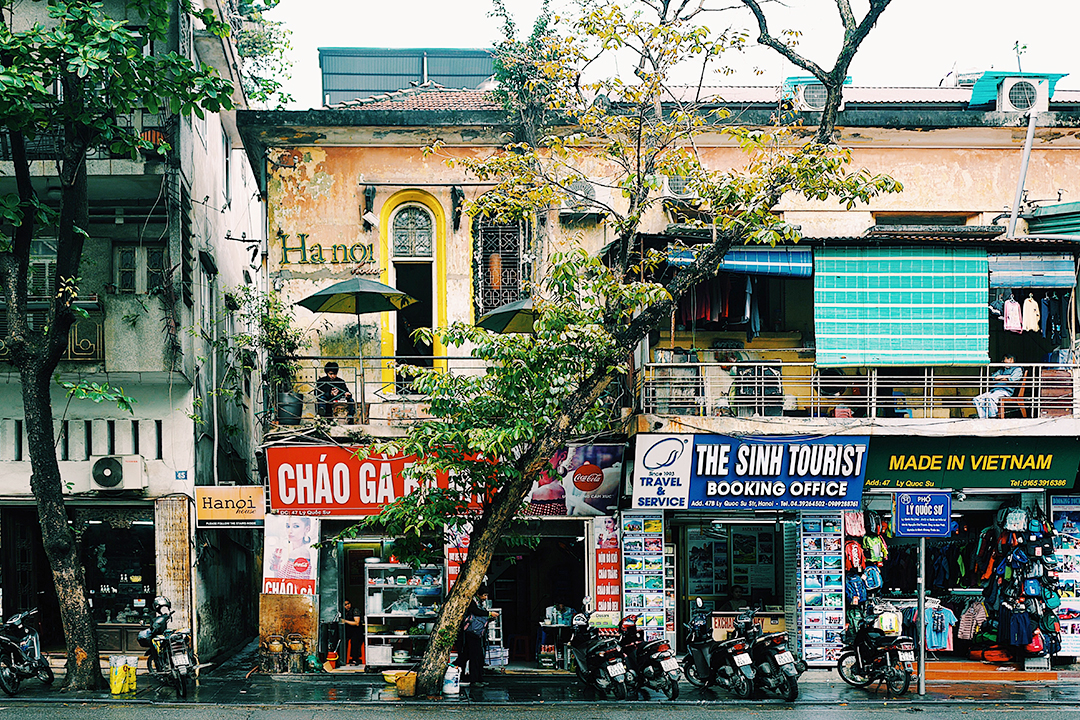 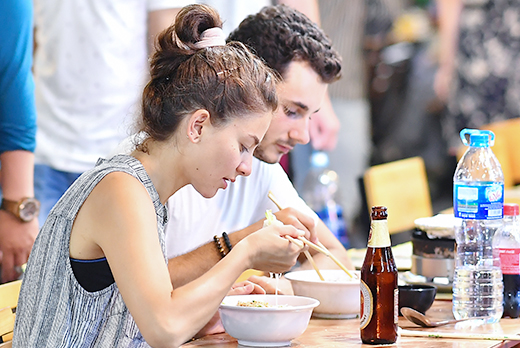 Travelers enjoying pho on the street

Also home to LOTTE HOTEL HANOI, Hanoi is the oldest capital city in East Asia, with its history dating back to 1010. And its culinary culture also boasts a long and rich tradition and depth. Northern Vietnamese foods tend to have lighter flavors than their southern counterparts. And because the northern part of the country has been fertile for rice farming, rice-based dishes are well developed. Pho, the rice noodle soup, is the best-known one. And to travel to Hanoi is to have a chance to taste the greatest bowl of pho you’ve ever had.

But there’s more to Vietnam than pho. From crab noodle to eel noodle and snail noodle and some strange bowl of noodle soup you’ve never heard of before, there are endless choices for noodle soups in Vietnam.
Route 1. Pho and Bun Cha, Best of the Best
Pho and bun are the two best-known types of rice noodle in Vietnam. Pho comes with the warm, beef broth. The word pho refers to both the bowl of rice noodle soup and the thin and flat rice noodle. Soak rice flour in water and flatten it, and then boil it before cutting it into noodles. The broth is made from beef leg bone and meat. The bowl made of beef broth with beef slices is called pho bo. The one made of chicken broth and featuring chicken meat is pho ga. 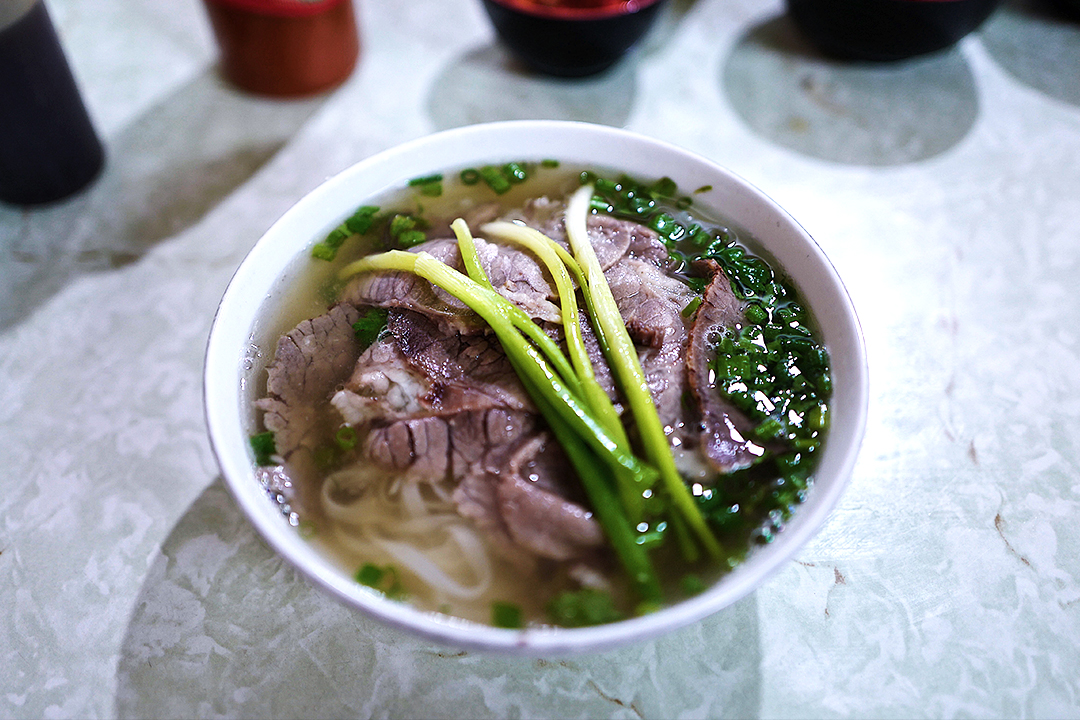 Bun has been gaining some international recognition of late through bun cha. Bun is a thin and cylindrical noodle. We’re more familiar with pho, but the locals eat just as much bun. The best-known bun dish is bun cha, served with bun noodle and grilled meat, or cha. Think of eating your Korean naengmyeon (cold noodle) with galbi meat slices. The Korean noodle comes in cold broth, whereas bun cha comes with bun noodle, grilled meat and warm broth for dipping, all served separately. Bun cha tends to sit well on the Korean palate. It’s hard to go wrong when you have that sweet and sour sauce for the delicious noodle and the savory meat to go with it. 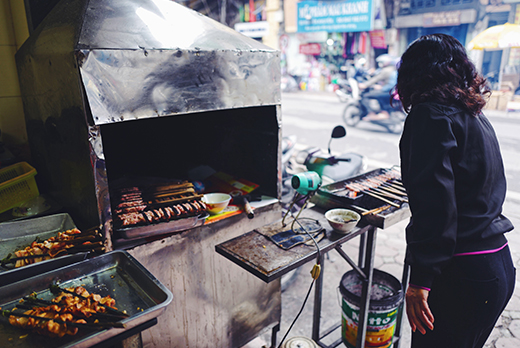 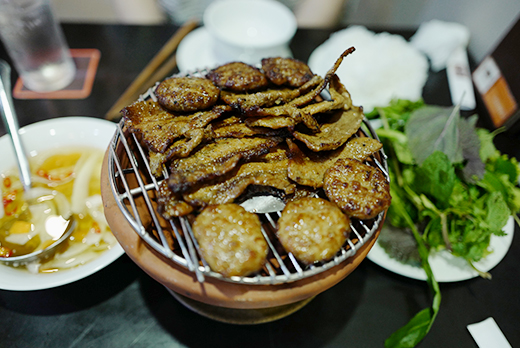 Pho and bun cha are two of the best-known dishes in northern Vietnam, and Hanoi is where it all started. You can get a bowl of bibimbap anywhere in Korea, but to get the authentic one, you have to eat it in Jeonju. And if you want the original pho and bun cha, Hanoi is the place to be. 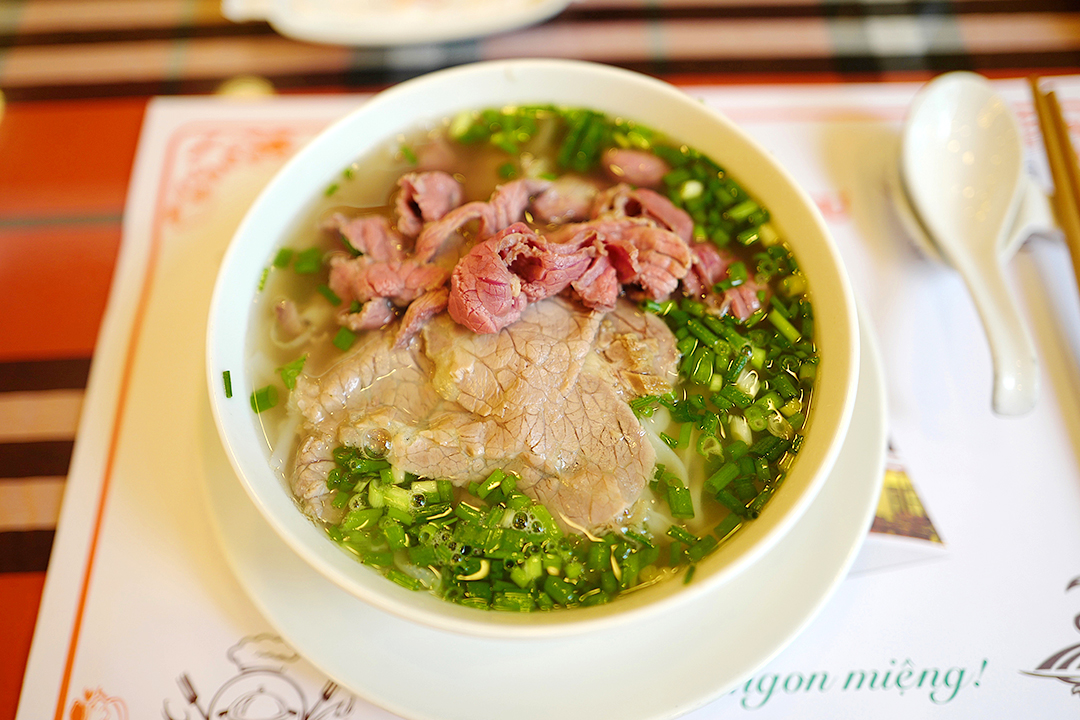 1. Pho 10 Ly Quoc Su, Gold Standard for Hanoi Pho
Pho 10 Ly Quoc Su is regarded as the top pho restaurant in Hanoi. It’s famous for the clear and delicious broth that has won over the locals and international tourists alike. During his visit to Hanoi in 2018, Korean President Moon Jae-in visited the Hoang Minh Giam restaurant of Pho 10 Ly Quoc Su.
For some extra flavor, squeeze a lime wedge into the hot broth and drop a couple of pieces of hot chili pepper. You’ll start sweating in no time, and slurp down the entire bowl without even realizing it. When the bowl is put down, your thumbs will go up in approval.
Address 10 Ly Quoc Su, Hoan Kiem District, Hanoi
Inquiry +84-4-38-257-338 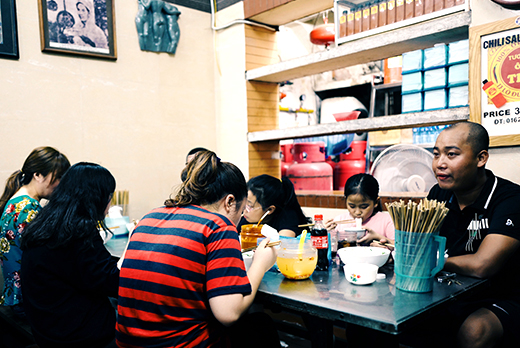 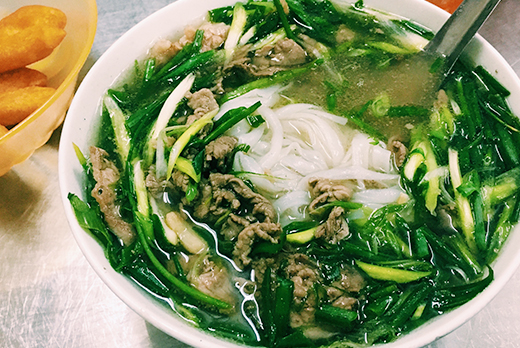 2. Pho Thin, Trip Down Memory Lane
In 1979, with pain of the Vietnam War still fresh, Mr. Thin wanted to open a pho restaurant. He wanted to add something special to the typical Hanoi-style pho. Rather than boiling beef to get broth, Mr. Thin came up with an innovative recipe. He would stir-fry beef with garlic and oil, and then get his broth with the cooked beef. And instead of cilantro, Mr. Thin put in slices of chives. And that little tweaking laid foundation for innovation, and Pho Thin came to be known for its inimitable taste.
Pho Tin’s pho is indeed quite different than your average Hanoi pho. And Koreans may also find it quite familiar, for it has the taste of the Korean dish, beef radish soup. Savor the rich flavor of the broth, and put a piece of meat on top of your noodle and chew them together. Try dipping quay, the deep-fried breadstick, into the broth. It will bring back so many memories, and get your battery recharged, too.
Address 13 Lo Duc, Hai Ba Trung District, Hanoi
Inquiry +84-98-252-28-66 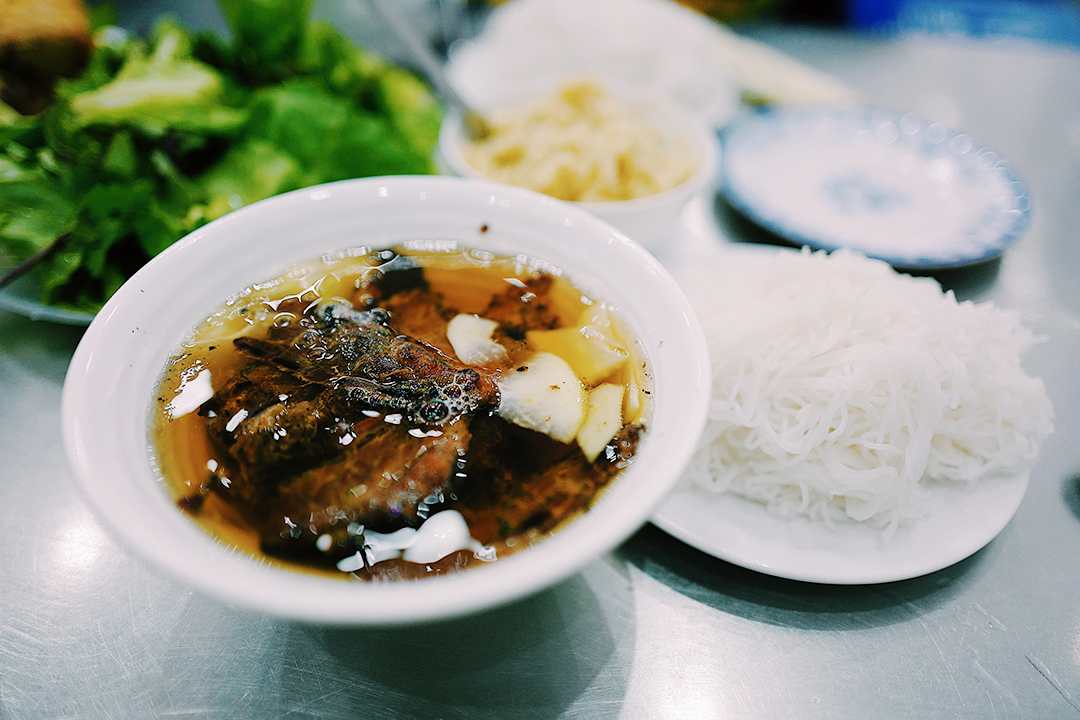 3. Bun Cha Huong Lien, President Obama’s Bun Cha
Here’s a restaurant that shot to international thanks to former U.S. President Barack Obama. It’s Bun Cha Huong Lien, which has been serving bun cha in Hai Ba Trung District for decades. During his visit to Vietnam in May 2016, then-President Obama dined there with Anthony Bourdain, host of the CNN travelogue program, “Anthony Bourdain: Parts Unknown.” The U.S. government asked the restaurant to pay particular attention and prepare fresh and quality dishes for the president. And then the owner Nguyen Lien is said to have replied, “We’re not too worried about that. We’ve been making millions of dishes of bun cha for years, and we’ve always used the freshest ingredients. And we’ve been doing that with utmost love and care.” He had the pride that he could have the best dishes for the president if he just kept doing what he’d been doing all along. That is the foundation of what made Bun Cha Huong Lien such a great restaurant.
Address 24 Le Van Huu, Hai Ba Trung District, Hanoi
Inquiry +84-24-3943-4106
Route 2. Authentic Noodles for Noodle Aficionados
Here are five ‘bun’ dishes that you didn’t know existed before you traveled to Vietnam. The first is ‘Bun Bo Nam Bo.’ It’s a bowl of narrow and smooth noodle, served with fresh vegetables and grilled meat, with ground peanuts and fried chopped onion on top. And you mixed them all with sweet sauce. It’s a must-have dish in Hanoi, and ‘Bun Bo Nam Bo’ on 67 Hang Dieu serves the ultimate Bun Bo Nam Bo. 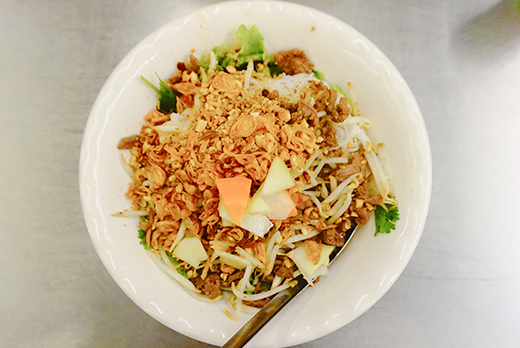 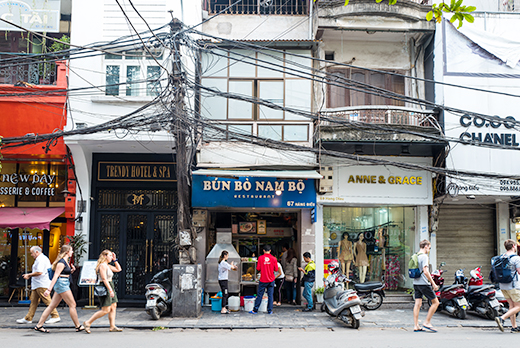 Next up are Bun Rieu Cua and Bun Rieu Oc. Rieu is the broth made of seafood, such as fish or crab, along with tomatoes and other vegetables for sour taste. Pho noodle comes topped with ground cua (crab meat) or oc (snail). It has the light flavor with a sweet and sour aftertaste, thanks to tomatoes. 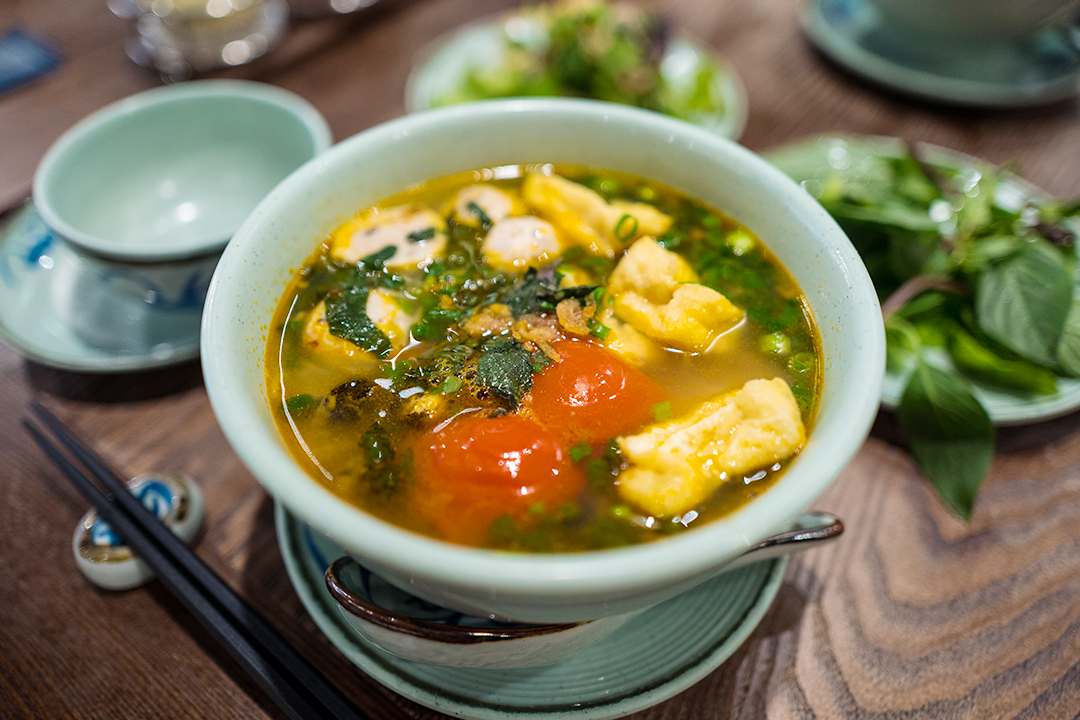 The snail noodle may turn off some people because of the ingredient. But for the most part, freshwater snail that we find in soybean paste stew (doenjang jjigae) and whelk from Korean-style spicy noodle are used. In Vietnamese, ‘oc’ covers all of those ingredients. The chewy texture of oc makes this a popular dish among the locals. 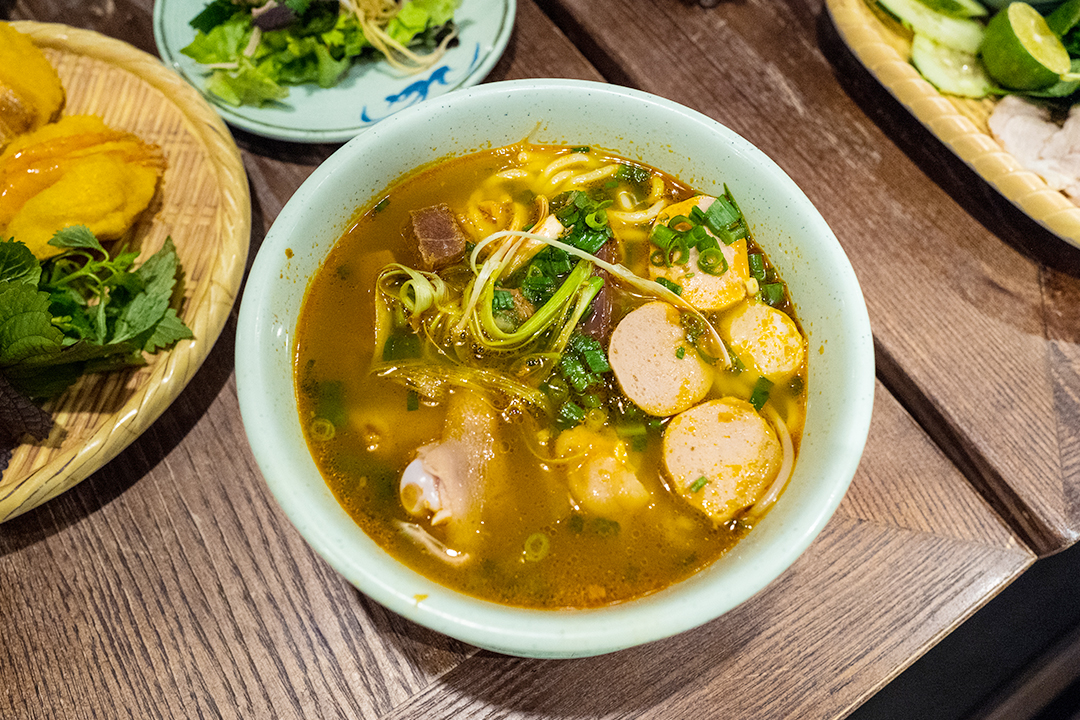 Bun Bo Hue has some cult following, and it’s the Vietnamese equivalent of ‘seonji’ (congealed ox blood) soup eaten in Korea. It’s the top pho dish from the Hue region, and has pig knuckles and congealed pig blood in spicy broth. Unlike other noodle bowls, this uses thick noodle. The broth falls on the salty side, and thicker noodle goes better with it. It’s a quick and effective cure for hangover. 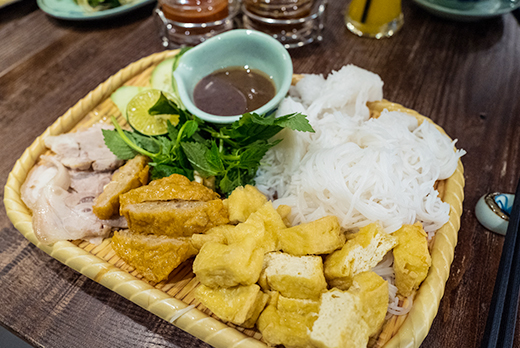 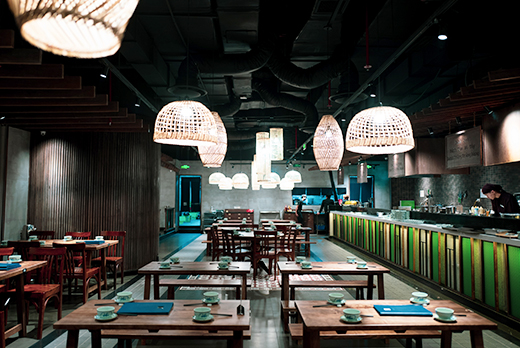 Bun Dau Mam Tom may just be the most challenging noodle soup because of the fermented shrimp paste called ‘mam tom.’ The smell of it makes this polarizing dish. You either hate it so much you don’t want to go near it, or you fall in love it so much you can never go back. If you’re up for fermented sauces and exotic flavor, it’s worth a shot. Pho ngon 37 is the one-stop destination that serves a wide range of noodle soups.
• Bun Bo Nam Bo 67 Hang Dieu, Hoan Kiem District, Hanoi
• Pho ngon 37 Lotte Center 3F, 54 Lieu Giai, Ba Dinh District, Hanoi
Route 3. The Ultimate: Exotic, Healthy Noodles
There’s no better way to finish off your travel through Hanoi with healthy noodle dishes with sumptuous amount of eels, crabs and shrimps, among other expensive ingredients. And they’ll only cost you about 2,000 won to 4,000 won. These nutritious dishes won’t lighten your wallet. 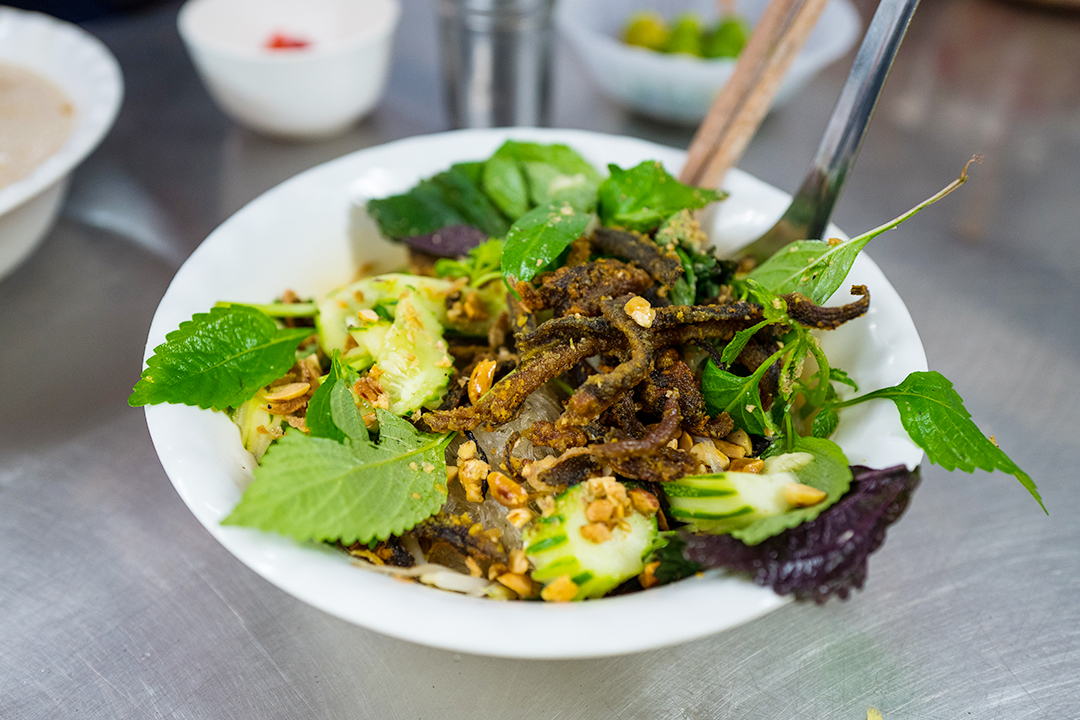 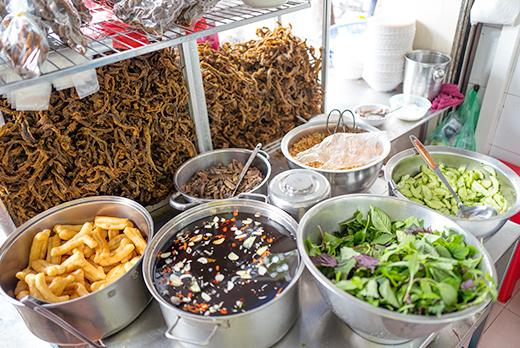 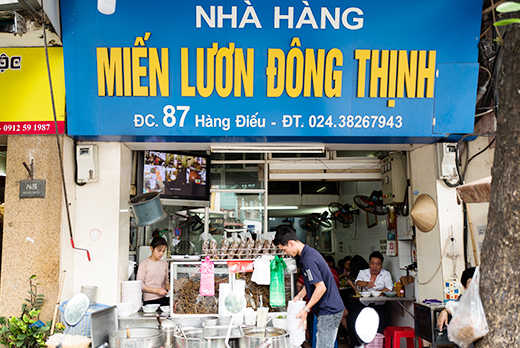 1. Mien Luon Dong Thinh, Happiness for Just 2 Bucks
Mien Luon, otherwise noodle, is a hugely popular dish among the locals. You can choose to order it with or without broth, and it comes with fried eel the size of an adult finger. The fired eel is perfect companion to the broth, and if you bite on the whole fried eel, down to its bone, the umami taste will explode on your tongue. The dry type, without the soup, comes with sweet and sour sauce. Mix it up with cucumber slices and other veggies, and gobble it up with fried eel. It’s a dish people of all ages can enjoy. Mien Luon Dong Thinh should be the place to visit.
Address 87 Hang Dieu, Hoan Kiem District, Hanoi
Inquiry +84-24-3826-7943 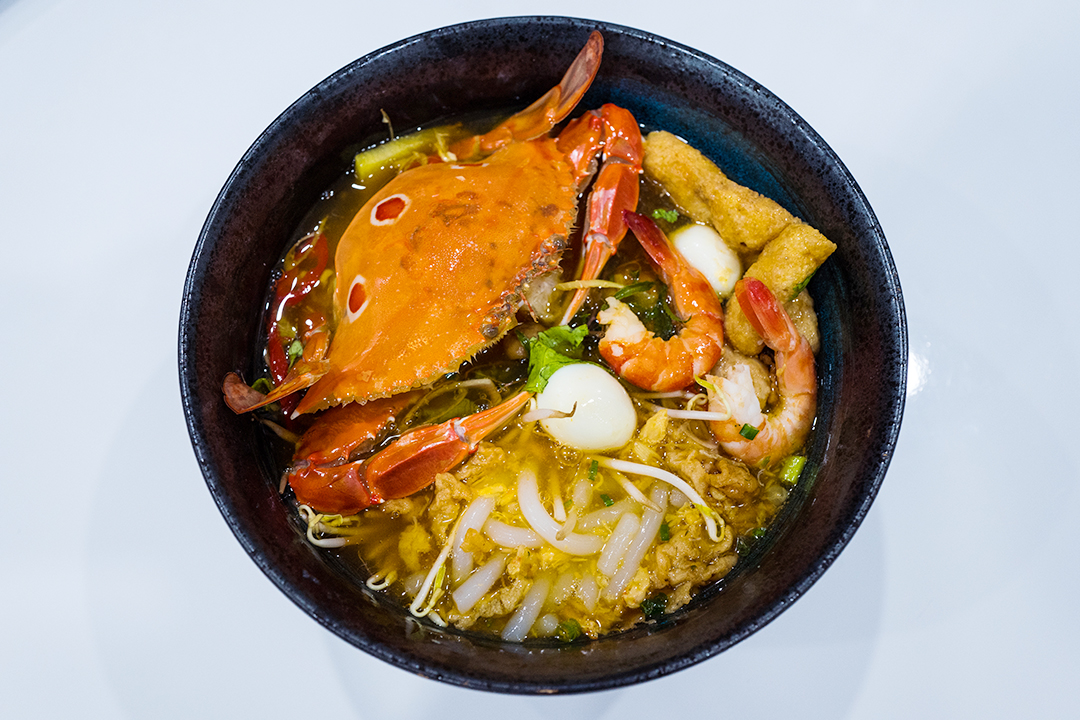 2. Banh Canh Ghe, Destination for Noodle Fanatics
Banh Canh Ghe, crab noodle soup, challenges stereotypes about noodles. The thick noodle is made of the mix of tapioca starch and rice flour, giving it some translucent look and unique texture. The broth is less like soup and more like sauce for sweet and sour pork. Squeeze in calamansi into the soup to add sour bite to sweet and salty taste. Crab meat, fish cake and quail egg on top go really well with the thick noodle. It will be as deliciously filling as any gourmet dishes. 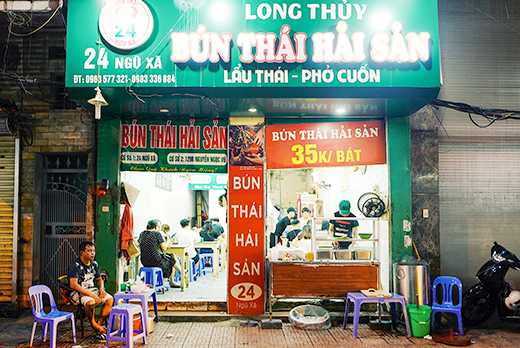 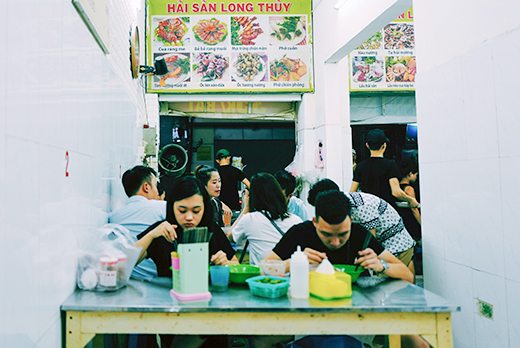 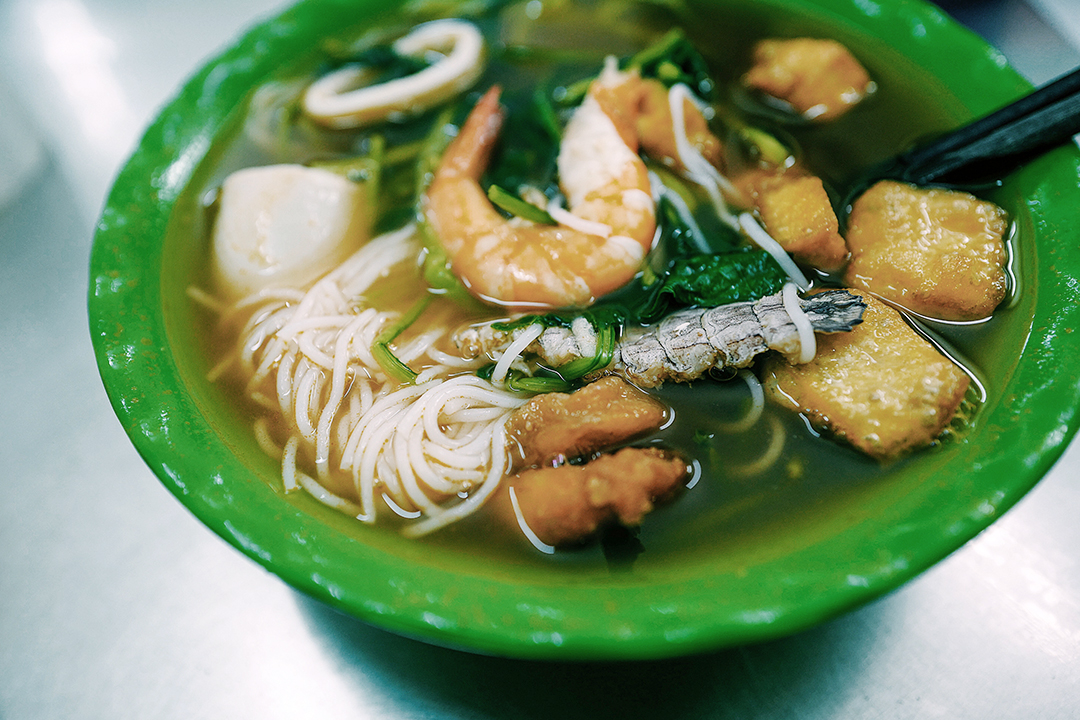 3. Bun Hai San Long Thuy, Exotic Seafood Noodle Soup
Bun Hai San Long Thuy, the Thai-style seafood noodle dish with fried tofu and red broth, is a hip dish among the young folks in Hanoi. At about 2,000 won to 3,000 won, a typical bowl includes a great amount of squid, shrimp, fried fish and crawfish on top of the noodle. And it just looks so delicious that once you see it, you won’t be able to get it out of your mind until you have a go at it. The broth is mostly sour and will remind you of tom yum kung soup of Thailand. If you’d like to try something new, rather than the traditional or the familiar, then this is your choice. Fans of Southeast Asian cuisine and exotic scents would also love this noodle soup.
Address 24 Ngu Xa, Truc Bach Lake, Ba Dinh District, Hanoi
Inquiry +84-96-357-7321 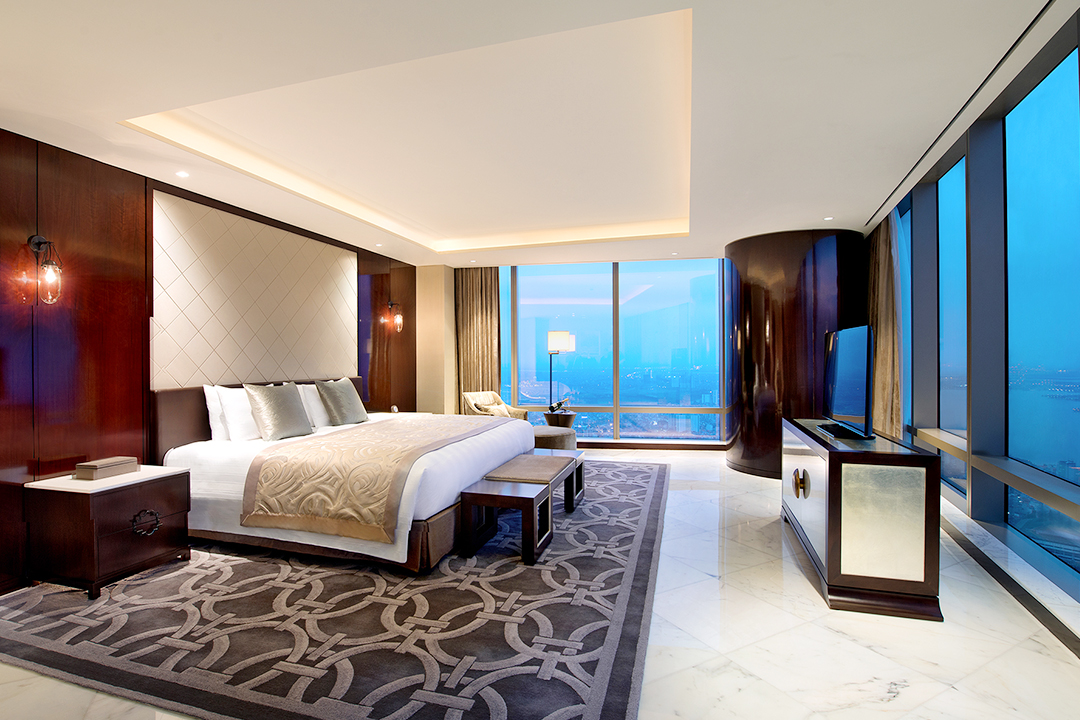 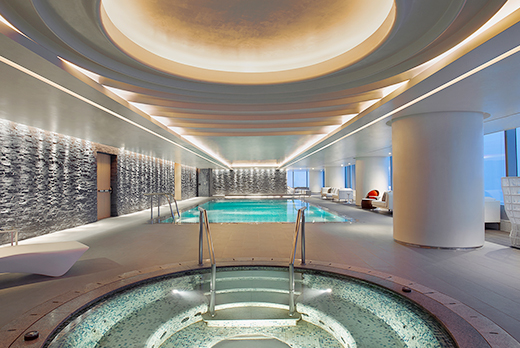 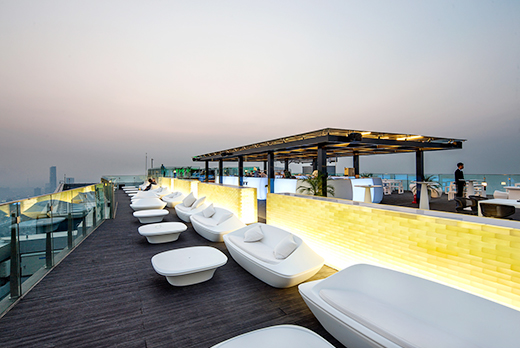 Where to Stay in Hanoi: LOTTE HOTEL HANOI
LOTTE HOTEL HANOI is housed in the upper part of the 65-story landmark, LOTTE Center Hanoi. Rooms offer breathtaking views of Hanoi and they’re designed with traditional Vietnamese patterns. Top of Hanoi, the rooftop bar with a view of the city’s skyline, and Evian@Spa, where you can relax and heal your mind and body in natural surroundings, are among luxurious facilities that satisfy your needs.
Address 54, Lieu Giai St. Cong Vi Ward. Ba Dinh, Hanoi
Inquiry +84-24-3333-1000
Website www.lottehotel.com/hanoi-hotel