Tasting North Korean Food in Sokcho
During the Korean War, some of the refugees who’d come down from north of the border settled down in Sokcho. Craving food from back home, they started making their own dishes and selling them to make ends meet. This is how we’re now able to enjoy North Korean food in Sokcho.
In Sokcho, you’ll see the vast blue East Sea to the east, and Seorak and Jeombong mountains to the west. Hoengseong and Taebaek, famous for hanwoo (Korean native) beef, aren’t too far from Sokcho, either. Surrounded by mountains and the ocean, with ample supplies of fish and meat, Sokcho is a great culinary town. On top of that, Sokcho is the best place in South Korea to get a taste of Hamgyong-style North Korean food. 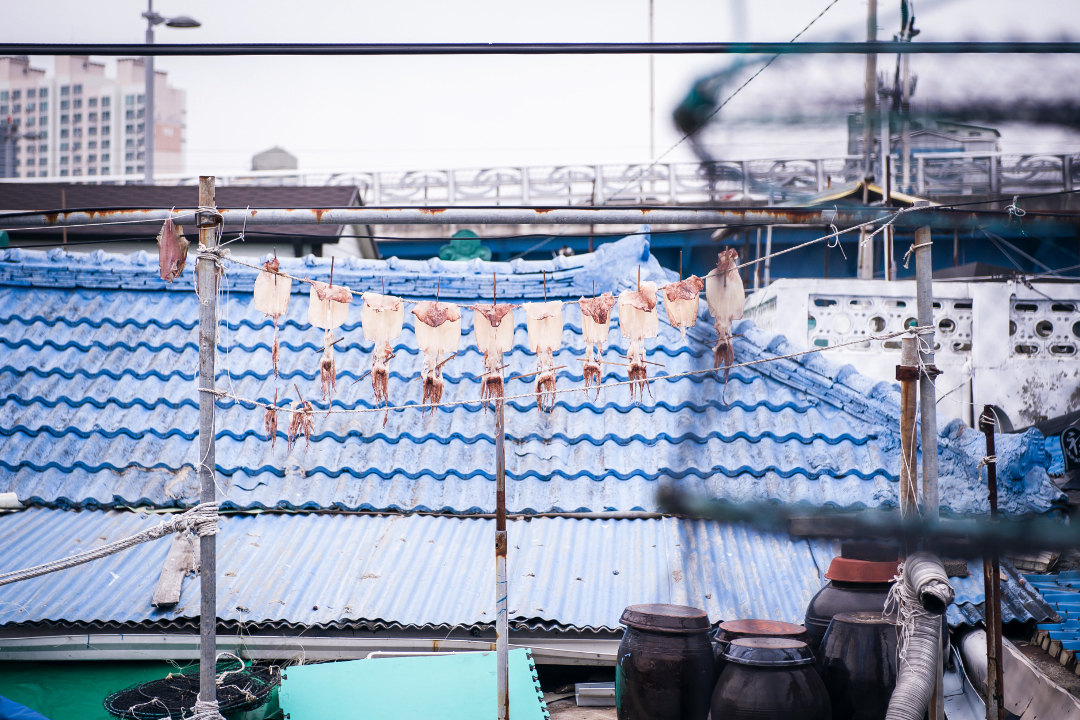 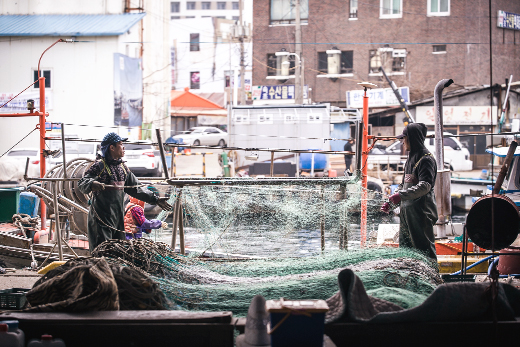 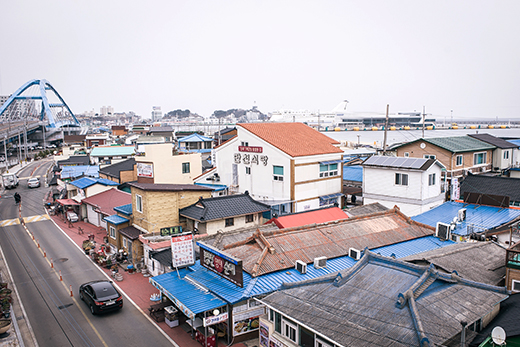 Abai Village in Sokcho was formed by displaced people who, for some 70 years, have been dreaming of going home again. The food they serve you doesn’t just bring you taste of their home; it’s sprinkled with their longing for and memories of their hometown. 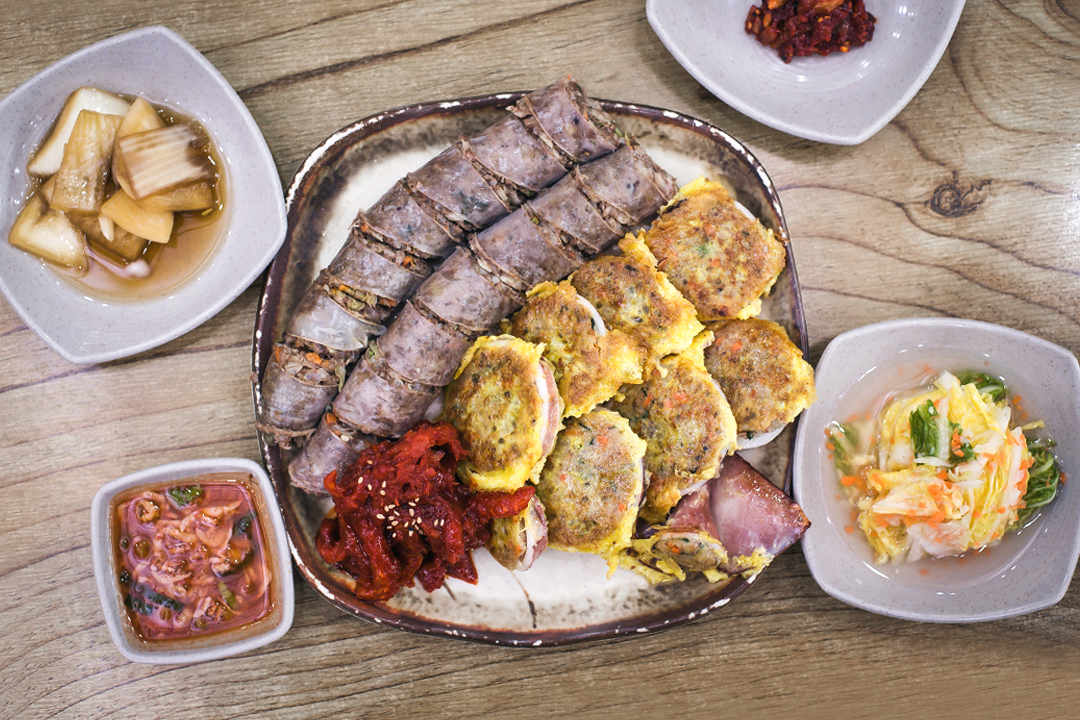 Abai Soondae
During the Korean War, Sokcho was one of the northernmost bases for the U.S. troops. Refugees from the North settled in Sokcho, hoping to return home one day well before the armistice was signed. And people from Hamgyong Province, only a short voyage by boat from Sokcho, even formed their own community south of the border. It became Abai Village. This village and its neighboring areas naturally became the capital of Hamgyong-style North Korean cuisine. Squid and pollack soondae (blood sausage), which use seafood instead of pig intestine, became local staples.
Squid soondae is dipped in egg mixings and fried. Once pork became readily available, pork soondae also became popular in the region. Soondae from Abai Village is quite different from the types you’ll find in Jeolla regions or Jeju Island, where blood is used, or soondae from Byeongcheon or Baekam in the central part of the nation, where vegetables are prominently featured. Whereas South Korean soondae uses small intestines, Abai style is made of pig tripe. You can get plenty of small intestines from a pig, but you’ll typically get 50 to 100 centimeters of tripe from one pig. Perhaps for that reason, you’ll get soondae with small intestines in Abai Village these days. Tripe is harder in texture, and those who aren’t used to it may find it too tough. 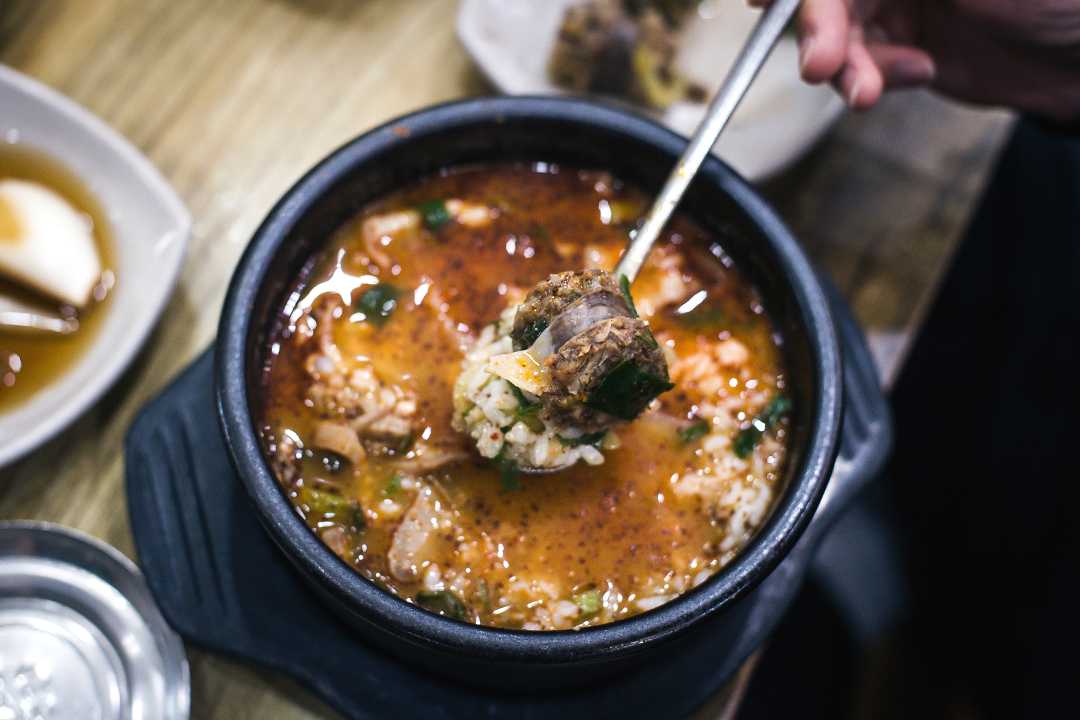 Soondae Gukbap (Rice Soup)
Abai soondae is commoners’ food today, but it was a cherished dish back in the days, especially the type that was made of pig tripe. And soondae became more accessible to a greater population as it began to be served in hot soup with rice and other parts of pig across the nation (some areas are famous for soondae served with noodle). Soondae gukbap (rice soup) in Sokcho comes in hot red broth, with Hamgyong folks liking their food spicy and pungent. Over time, though, some of that edge softened, and soondae gukbap in Sokcho isn’t as spicy as it looks. Pig tripe has given way to small intestines, and the Sokcho dish isn’t as unique as it once was. Soondae gukbap at Dancheon Sikdang (Restaurant), one of the two best-known eateries in town, is particularly famous. The restaurant is named after the Hamgyong-born woman who opened it. 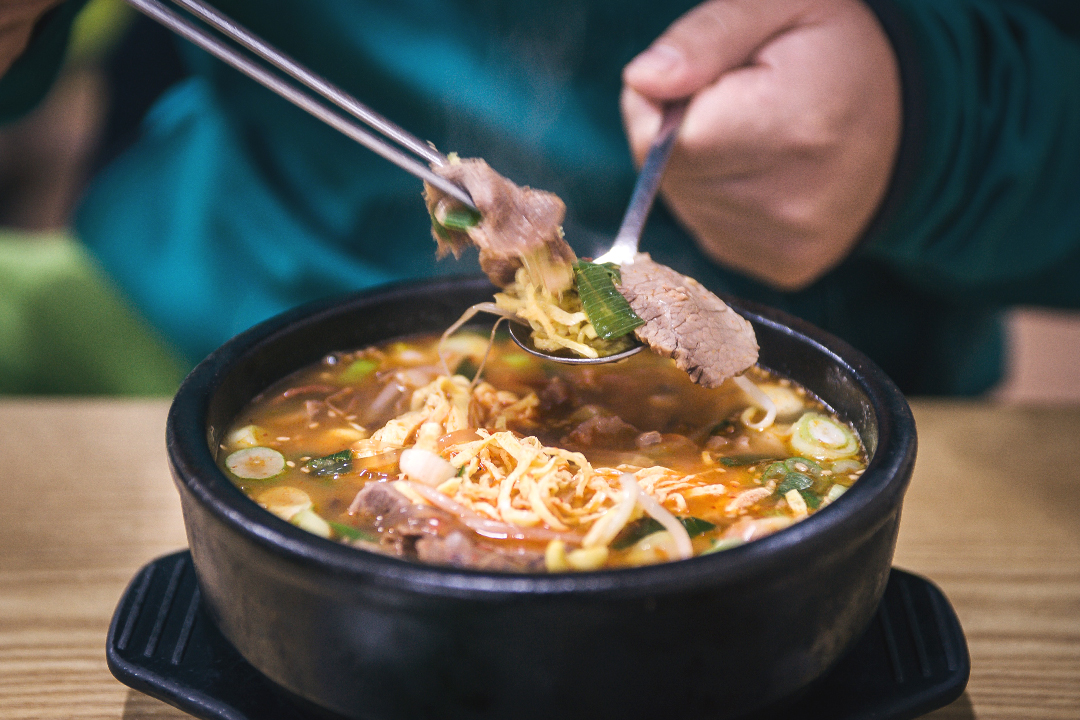 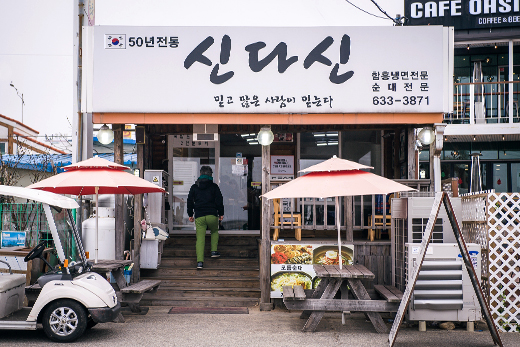 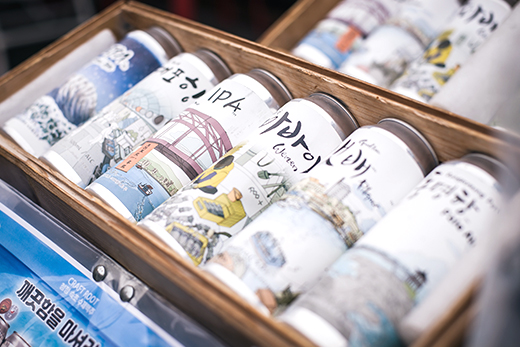 Gari Gukbap
Gari is the old term for ‘galbi,’ or ribs. The name of the restaurant could make you think of galbitang (beef short rib soup), but gukbap here more beef gukbap or yukgaejang (spicy soup with shredded beef). It comes in beef bone broth, with shredded brisket, bean sprouts, green onions and bracken. Then it’s all topped with strips of egg garnish. When it arrives at your table, gari gukbap looks vastly different from yukgaejang and beef gukbap, which are served in red soup. But as befits Hamgyong dish, gari gukbap has spicy sauce at the bottom. Stir it and see the soup turn red. In Sokcho, you’ll find several places serving soondae gukbap. But only Sindasin serves gari gukbap there. Sindasin and Dancheon are the two pillars of Abai Village. Sindasin was also founded by a Hamgyong native. Because of their common ground, Sindasin and Dancheon seem less like competing rivals and more like friends. 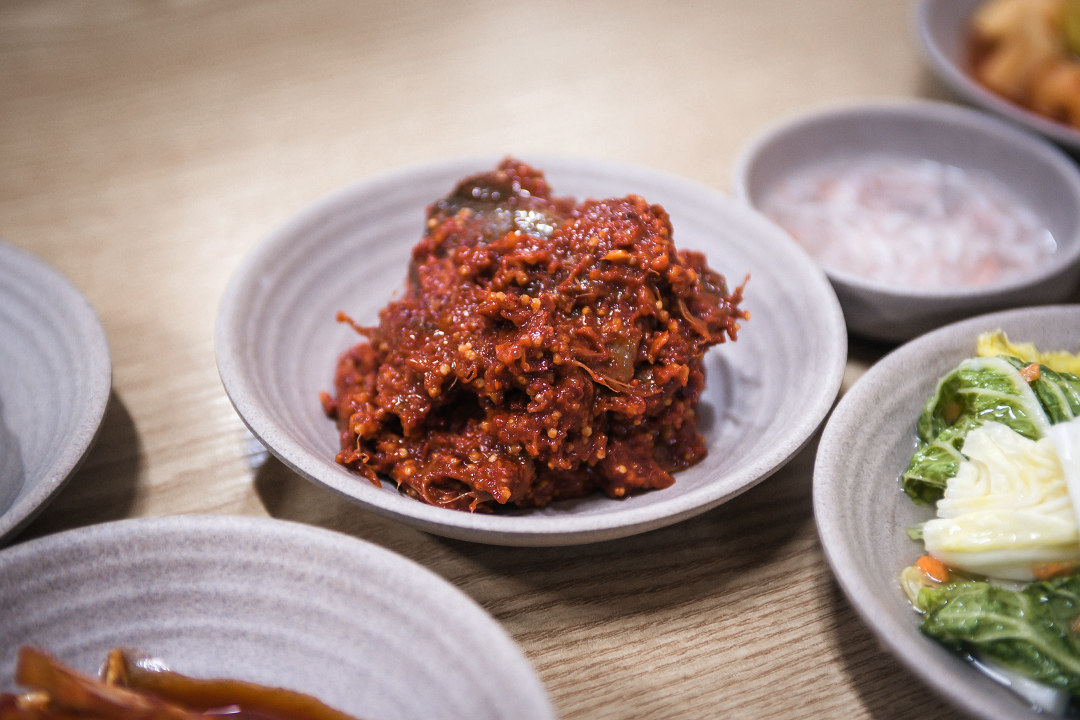 Gajami Sikhae (Fermented Flounder) and Myeongtae Sikhae (Fermented Pollack)
‘Sikhae’ (fermented fish) is commonly misspelled as ‘sikhye’ (sweet rice beverage with malt) in Korean. But both are spelled ‘sikhye’ north of the border. In the warmer southern regions, fish can go bad quickly, and fish are often served in the form of ‘jeotgal,’ heavily salted and fermented for better preservation. In the cooler northern part of the peninsula, fermented fish come with less salt and more grain. That’s sikhae in essence. Sikhae brings that ‘fermented’ taste, while being less salty than its cousin in south. Gajami (flounder) sikhae is a North Korean specialty that you can enjoy in Sokcho, but it could be a polarizing dish. Myeongtae hoe (raw pollack) or sikhae, served as garnish for Hamgyong-style naengmyeon (cold noodle), have become an alternative with the lack of gajami supply. Myeongtae sikhae has a sweet and sour flavor without quite the fermented taste of gajami sikhae. The two may seem similar but couldn’t be more different. 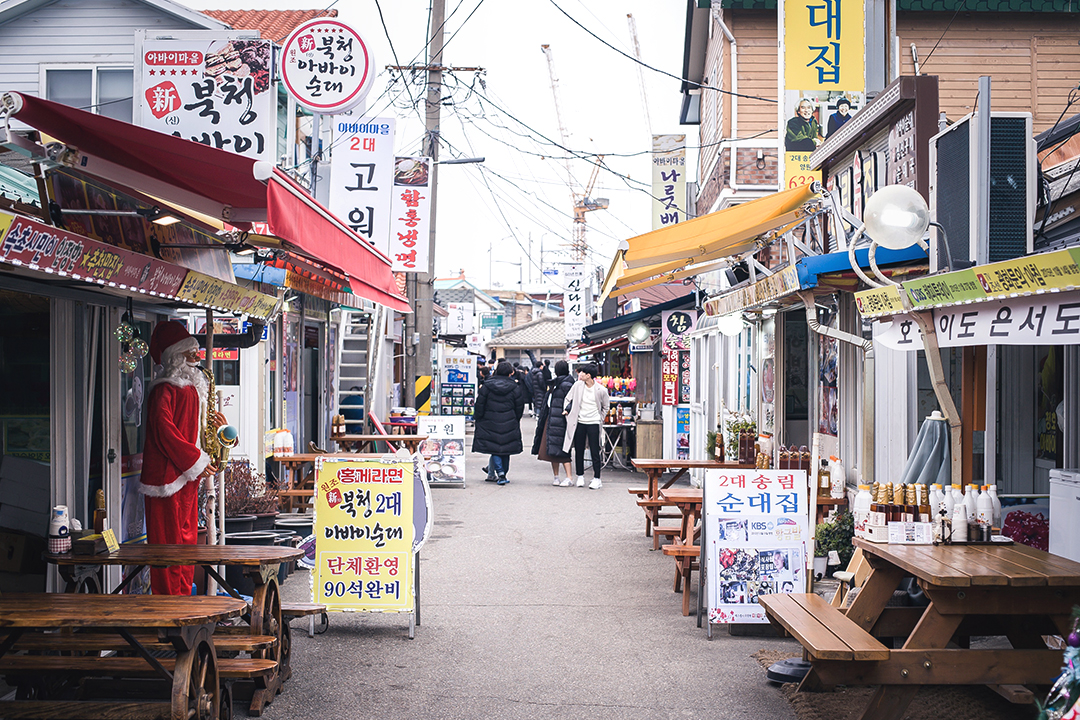 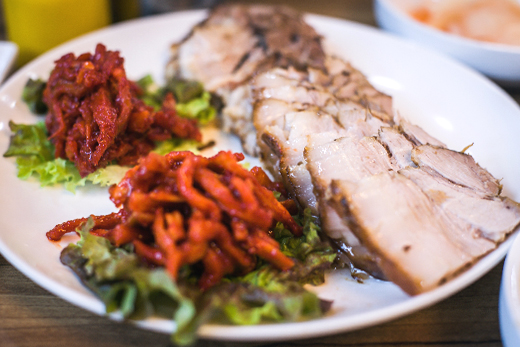 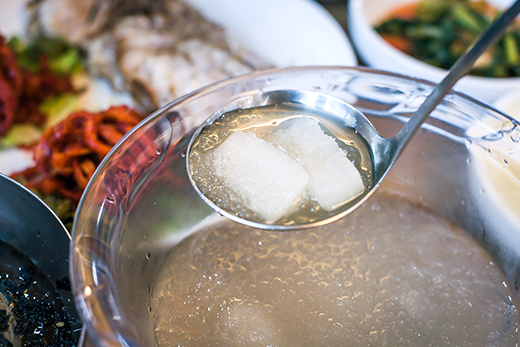 Dwaeji Suyuk (Boiled Pork)
At a typical Pyongyang-style naengmyeon restaurants, you’ll see patrons ordering a plate of boiled pork slices with soju. And at North Korean-style restaurants in Sokcho, boiled pork also makes a perfect companion for the liquor. Down a shot of soju and pick up a piece of pork with just the right balance of fat and meat. It’ll just melt in your mouth. Myeongtae sikhae is served on the side and the pork and the fermented fish go really well together. A lot of restaurants will serve quality suyuk, including Hamheung Naengmyeonok, Yeonggwangjeong Makguksu, Yimokri Makguksu and Baekchon Makguksu. And at most of those places, you can sample gajami sikhae, which forms a rather interesting combination with boiled pork. Don’t forget to ask for myeongtae sikhae, which will offset the greasy flavor of pork. It’s one of the joys of dining in Sokcho. 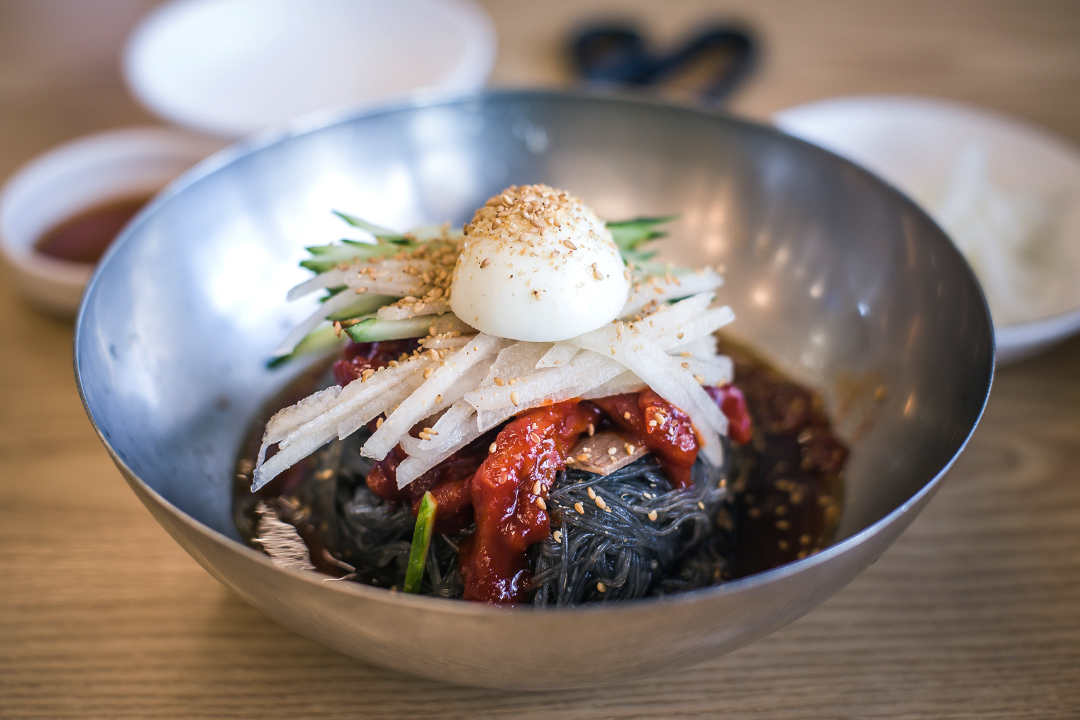 Hamheung Naengmyeon
You can’t find Hamheung naengmyeon in North Korea, only nongma guksu (noodle). Just as in Gangwon Province, Hamgyong Province, home to several mountains, is a major producer of potatoes. And they’ve been making noodles with potatoes for a long time. Grains with high starch content are collectively called ‘nongma’ in North Korea. Hamgyong-style potato noodle came to be called nongma guksu. It comes topped with gajami sikhae. But rather than mixing the noodle with other ingredients like in the South Korean style, they added dongchimi (radish water), oi naengguk (cold cucumber soup) or meat or bone broth to the noodle up in the North. Hamheung Naengmyeonok, the first Hamheung-style noodle restaurant on the peninsula that opened in Sokcho during the Korean War, still serves dishes with a hint of nongma guksu. When you order Hamheung naengmyeon there, you’ll get two kettles. One contains warm bone broth and you can drink it like tea. The other has colder bone broth with soy sauce, and it’s to be poured on your noodle. Hamheung Naengmyeonok is also the first restaurant to garnish Hamheung naengmyeon with myeongtaehoe, rather than gajami sikhae. Ijo Myeonok and Nakcheon Hall are other popular destinations for Hamheung naengmyeon. 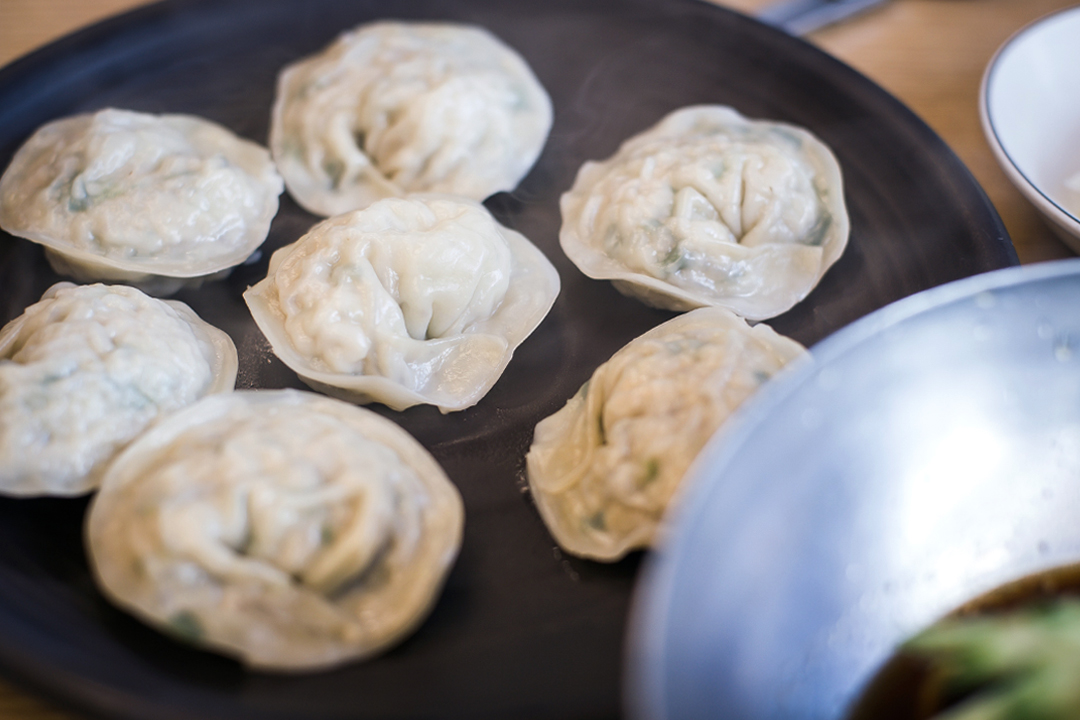 Mandu (Dumplings)
Unlike Pyongyang or Kaesong, Hamheung isn’t all that famous for its mandu. You’d find it difficult to give mandu in Sokcho five-star ratings. But at some eateries, you can order pheasant mandu. Back in the days, pheasant was the most common source of animal protein across the peninsula. A record shows that King Taejong Muyeol of Silla eat 9 to 10 pheasants daily. Given that knights of Silla were trained in Sokcho, pheasant mandu are definitely worth a try. Mandu served at Hamgyong-style restaurants in Sokcho tend to be smaller than those at Pyongyang naengmyeon houses, so they’re less expensive, too. 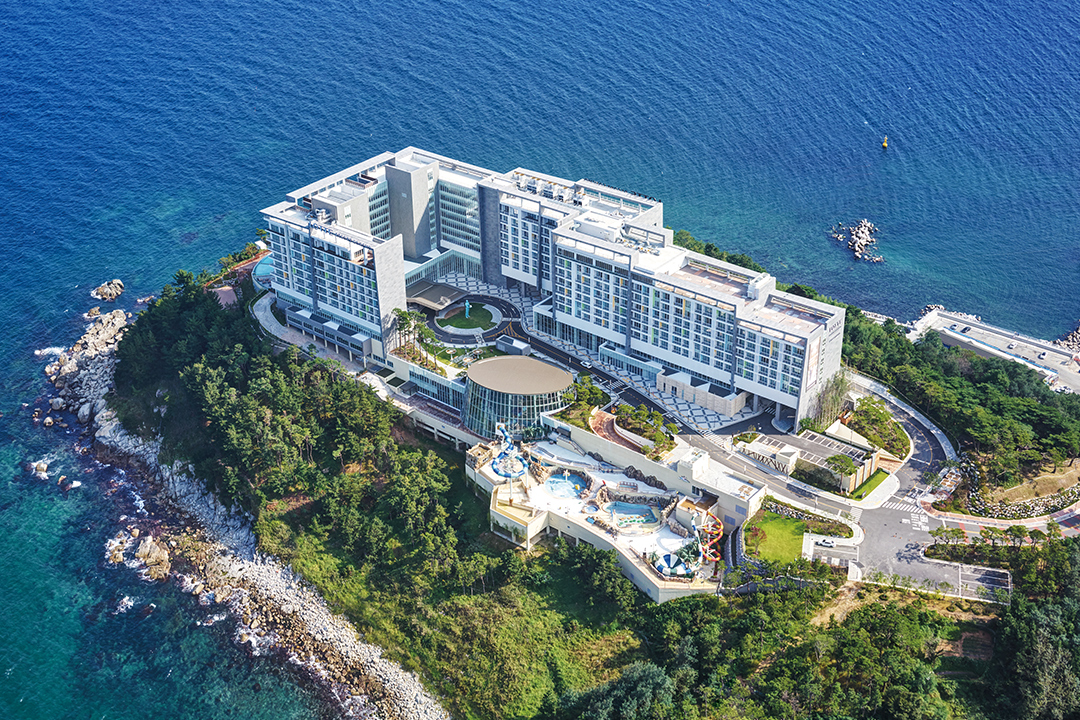 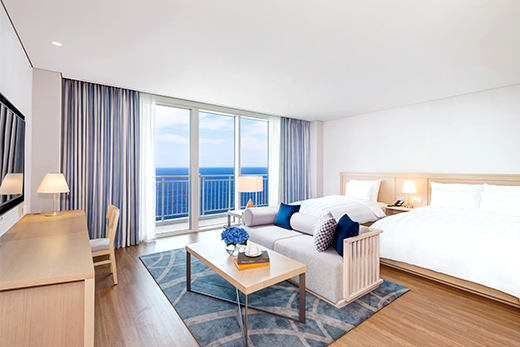 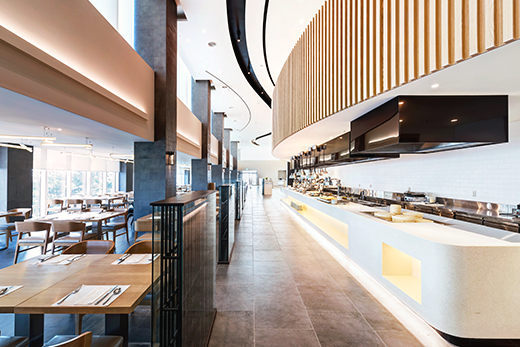 Where to Stay in Sokcho: LOTTE Resort Sokcho
LOTTE Resort Sokcho stands on the Oeongchi Hill, which is surrounded by the ocean on three sides. The spectacular view to the East Sea makes it a popular choice of accommodation. You can view the ocean from every room. The water park, boasting top facilities, is especially popular among families. The resort is about 4km from Abai Village, with only a short trip required back and forth.