Buddhist Nun Jeong Kwan and Dusugobang, Out in the World
Buddhist nun Jeong Kwan, the master chef of temple food, is residing in Suwon, home of her restaurant ‘Dusugobang.’ She’s brought herself out in the world, while still practicing asceticism.
In spring of 2017, Buddhist nun Jeong Kwan was quite the sensation. She was featured in an episode of the Netflix series “Chef’s Table.” She was the only Korean to appear in this documentary series on world-renowned chefs. But there was more. Jeong Kwan’s philosophy of food, as detailed in the documentary, bordered on shocking. It opens, “I am not a chef but a nun.” It was filmed over 15 days in May, around Buddha’s Birthday, on the grounds of the Chunjinam hermitage of Baekyangsa temple.
Jeong Kwan is the chief monk there. And the early summer landscape of Chunjinam featured in the documentary was so beautiful as to be surreal even for Korean viewers. And the temple food made by the nun compelled us to think more deeply about the way we treat food and nature and about the act of eating.
Temple food doesn’t use five pungent herbs (green onion, garlic, wild chive, chive and leek), nor does it include meat or seafood. But it doesn’t lack for nutrients, either, thanks to a wide range of vegetables. With a growing interest in healthy eating, vegetarian diet and temple food, plus the values that it stands for, have been garnering more and more attention. And among those who’ve been keeping tabs on healthy eating habits, there must be more than a few who have dreamed of meeting Jeong Kwan at Chunjinam.
But on a Monday afternoon, we met her not at the temple, but at an apartment complex in Suwon’s Gwanggyo. “There are boundaries in food. I’ve come out to the world so that I could interact with people about food and share my ideas with them,” Jeong Kwan said. She was seated at the center of a wide table. She had just returned from China, and she was a bit under the weather. But her eyes and petite body radiated with so much energy. 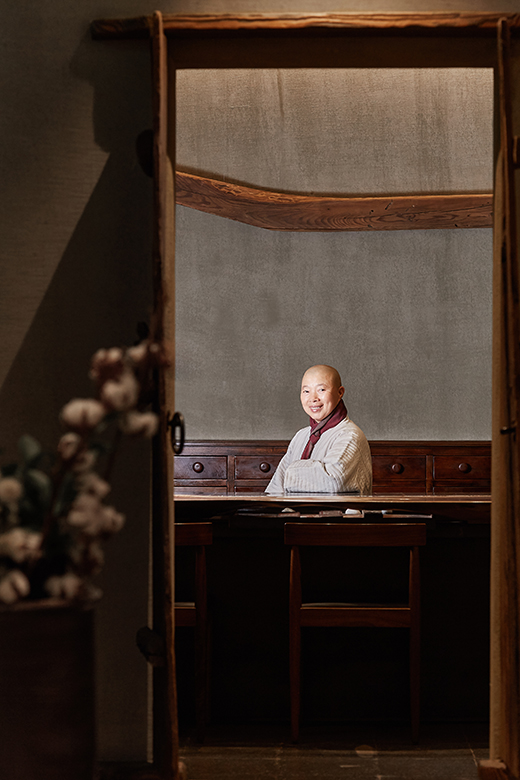 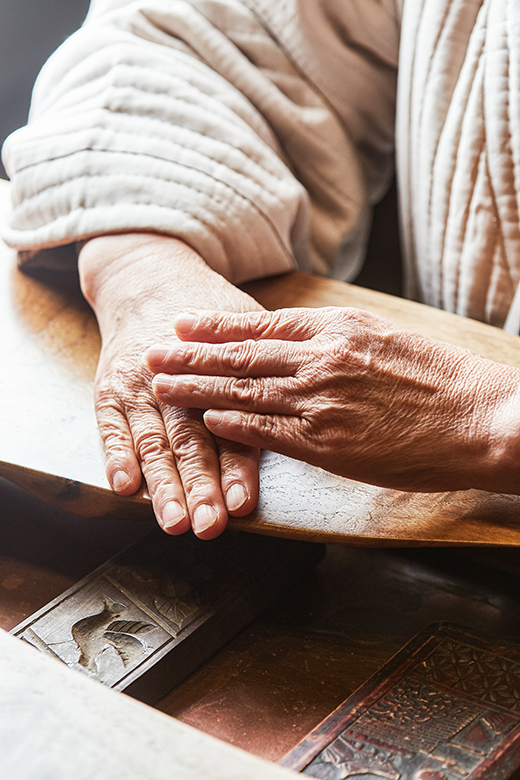 “Temple food is the type consumed by practicing Buddhist monks. Your mind will change depending on the food. If you eat food made of improper ingredients and prepared on improper recipe, then your body will react accordingly. When you have indigestion, your concentration will suffer and it will disrupt your practice. When we cook food that can become one with the person eating it, then it functions like medicine inside our body.”
Buddhist nun Jeong Kwan
We met the nun at ‘Dusugobang.’ The restaurant sits inside Alleyway Gwanggyo in Gyeonggi Province. It opened in October last year, with designs of reaching out to as many people as possible with temple food as the medium that transcends religions. Unless there was some special occasion, it used to be difficult to enjoy Jeong Kwan’s food outside the temple. Dusugobang is her second studio, a place where you can not only taste her fine dishes, but also participate in vegetarian cooking classes and other events. 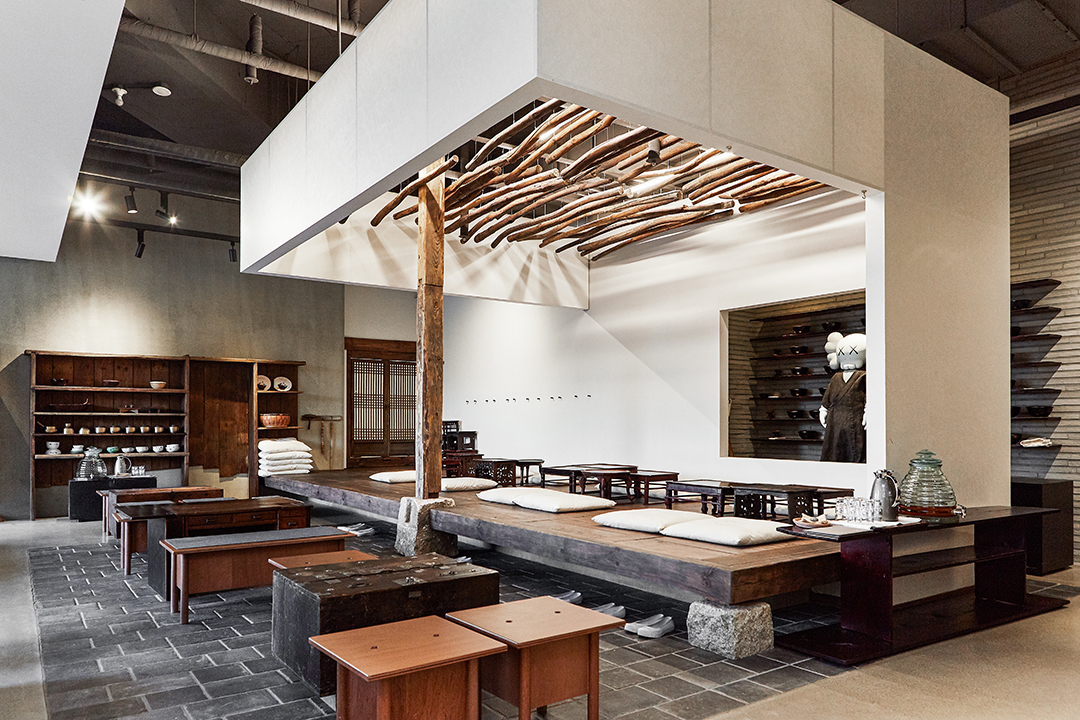 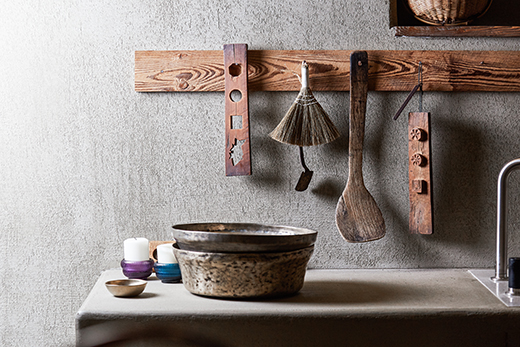 Dusugobang only serves 30 guests each day. The cap is in place because dishes here use handmade pastes and spices that Jeong Kwan brings over from Chunjinam. Temple food at Dusugobang, completed with rice and side dishes, is served in ‘baru,’ or bowls used by Buddhist nuns and monks. On the day of our visit, we had the basic soup and rice, with the signature side dishes of mung bean pancake and deep-fried mushroom. Herbs in three colors, which change from season to season, and three other side dishes, plus bulgogi made with meat alternative were also served. The name ‘bulgogi,’ normally a beef dish, may jump out of the menu for those coming in for vegetarian dishes. 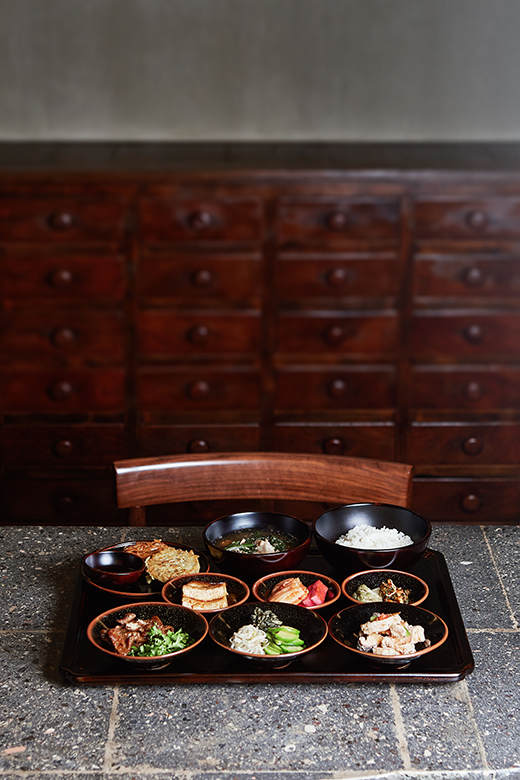 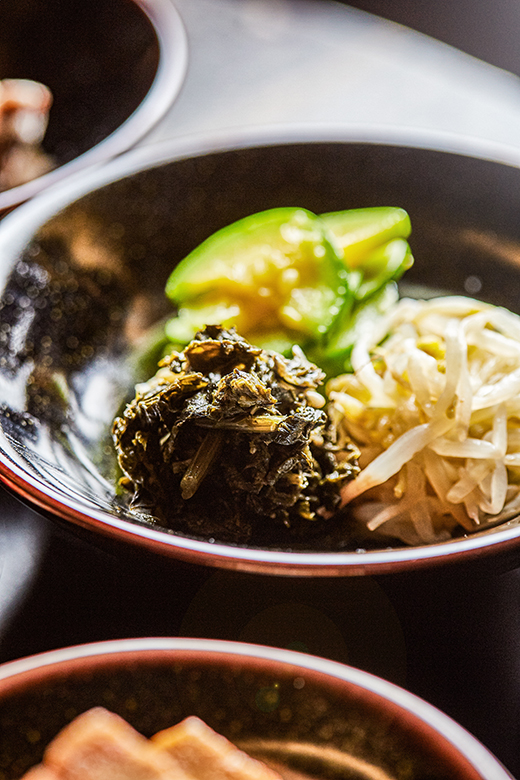 “Today’s Offering” menu available for only 30 guests a day

But rest assured that everything is vegetarian here. And the alternative bulgogi is there to help promote vegetarian diet. “This is not a religious facility. You could call this a cultural platform that allows us to promote our food and the culture of vegetarian eating,” said Oh Gyeong-soon, a director in charge of Dusugobang’s operations who has been studying temple food with Jeong Kwan for many years. “And to help vegetarian dishes more approachable, we’re serving things that you can easily make at home, such as alternative meat dishes.” Oh added that she hoped people who dine at Dusugobang would think about food that doesn’t just fill their stomachs, but also fills their minds and souls. 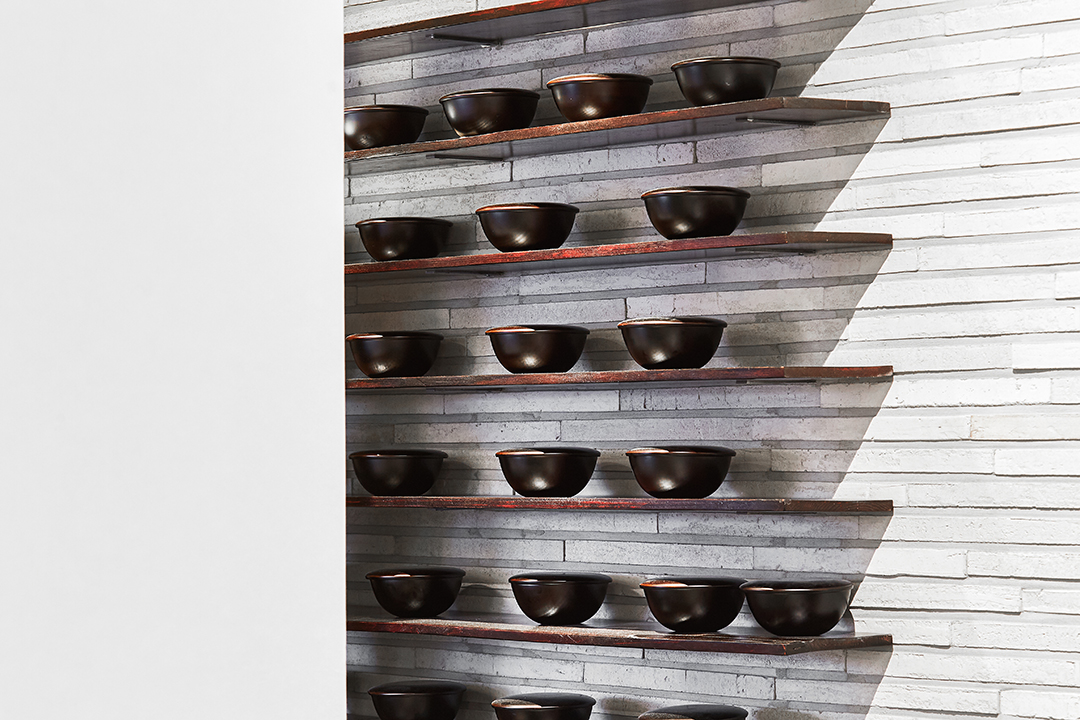 In one corner of Dusugobang, a set of baru, bowls used by Buddhist monks, is on display.

On the day of our visit, a kimchi making class was in session. Jeong Kwan greeted the participants: “You yourself must be at the heart of everything. You have to use the right ingredients to make the right food, and eat it the right way. And then you have to think about where that food is going to go. I am very happy to be here with you all, and it’s great to see everyone here.” The class is divided into two sections. First, participants make food. And next, they eat it together. And they talk about the meaning of preparing and eating the right food. 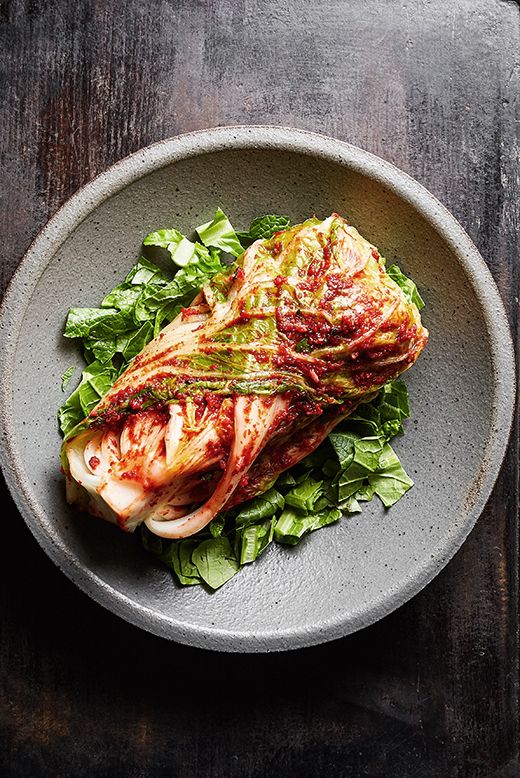 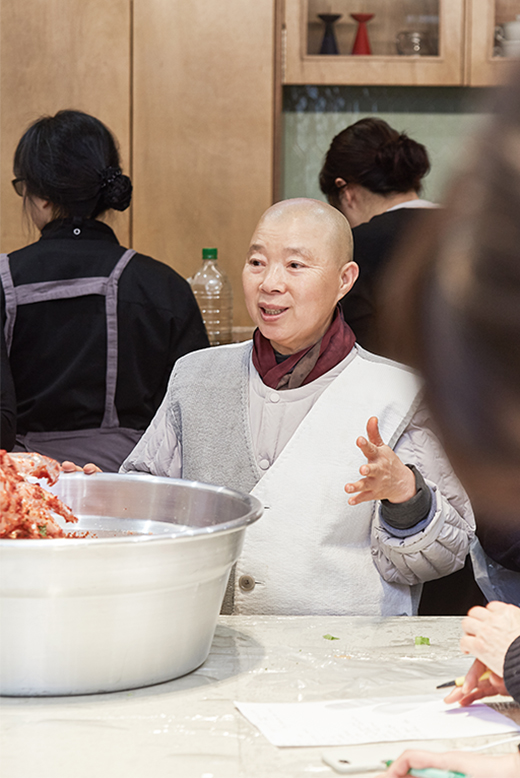 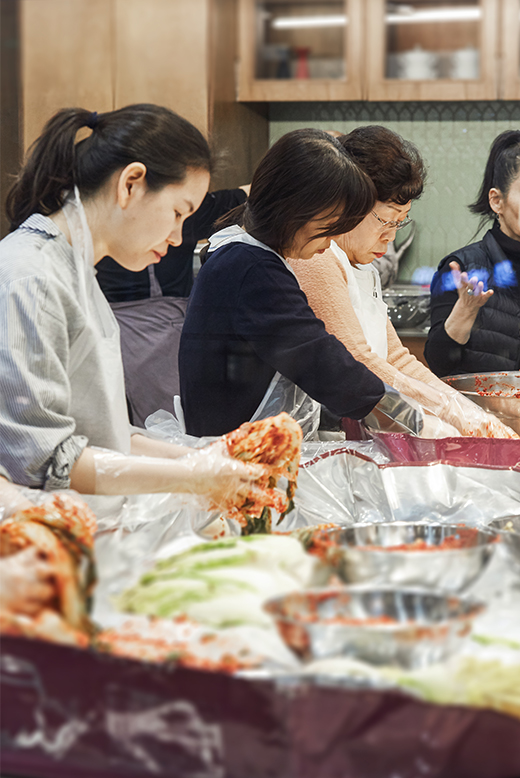 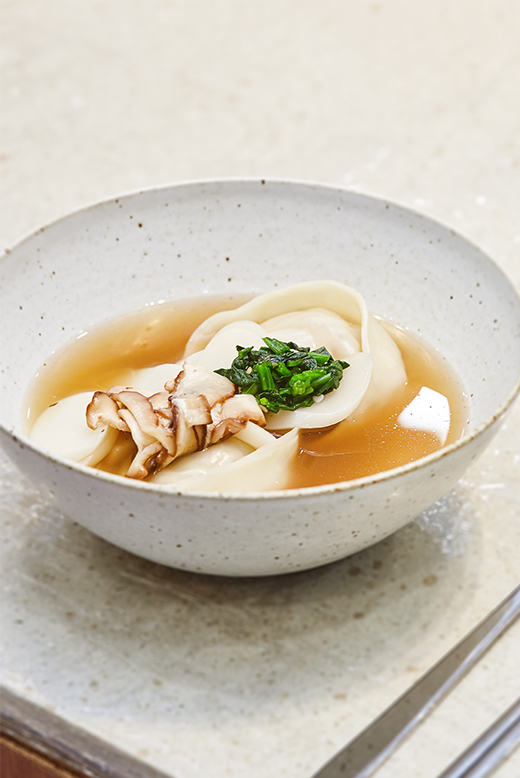 Q. How would you define temple food?
A. Quite literally, it’s food consumed by ascetic Buddhist nuns and monks. To practice asceticism, you have to have both mental and physical strengths. And I think food is the link that connects these two. We have to eat something to be able to act. Temple food is ultimately food for asceticism. Since the goal is to achieve enlightenment through asceticism, it’s also food for enlightenment.

Q. Can we accomplish all that simply by eating?
A. Absolutely. When it comes to recognizing logic and reason in life and enlightenment in Buddhism, food accounts for 70 percent of the process. Cooking and eating are both part of Buddhist practice. For instance, if you want to get to know someone, you have to make eye contact and spend some time talking with that person. The same goes for ingredients. You can’t just do whatever you want to do with them. You have to figure out their natural tastes, flavors and textures. To do that, you have to know yourself. That’s part of Buddhist practice.

Q. Is that why you grow and harvest your own plants?
A. You have to understand when you have to sow seeds, be it spring, summer, autumn or winter, and how they grow to become vegetables that we can eat. And we also have to recognize connections along the way. You have to keep searching for them, so that you’ll be able to take the energy from these ingredients to your own body in its entirety, and channel that into your own energy.

Q. Isn’t it difficult to grow these plants yourself?
A. Mother Nature does all the work. When she smiles, I smile with her. When we get plenty of sun but it doesn’t rain for long stretches, then I go water those plants. It’s up to nature and plants themselves to stay alive, and I can’t really control that. Time flows for these plants and myself at the same pace. 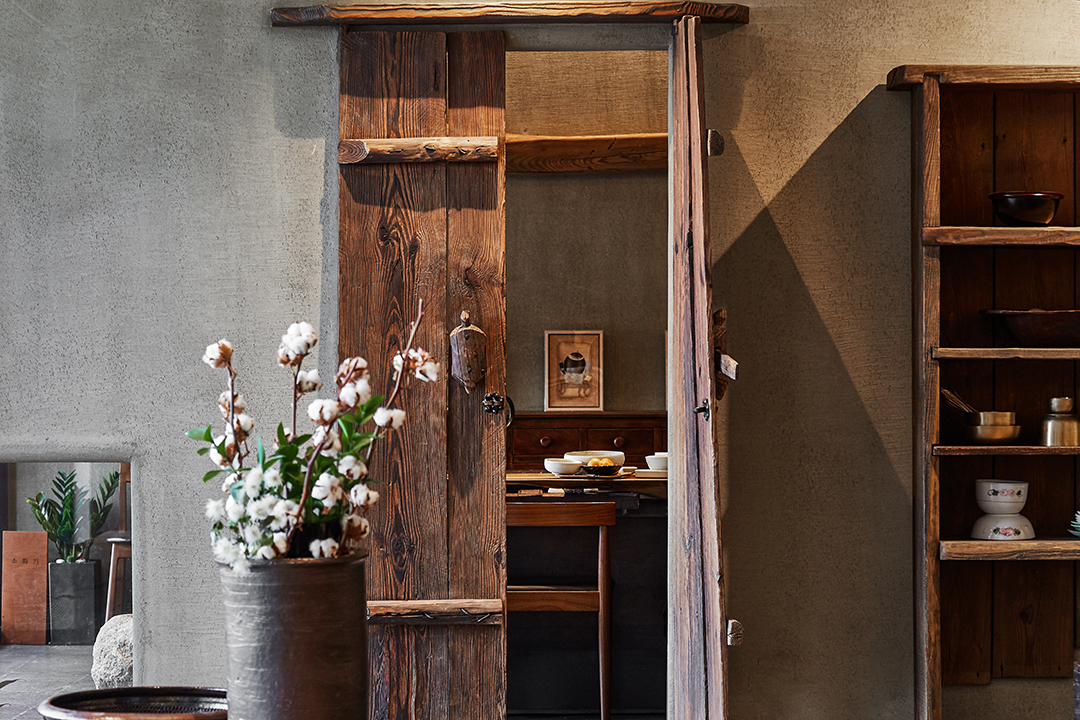 Q. You’ve said you don’t have recipes for dishes you prepare. How do you usually go about making your temple food?
A. Let’s say a flower has blossomed and borne fruit. It takes seven to nine days before this fruit can be eaten. After about three or four days, the taste and texture will change because of its environment. The skin can get thicker, for instance. In that case, I use a bit of salt. Another week from there, the plant shows renewed determination to stay alive. The color gets darker, the skin gets thicker, and the fruit will have seeds. Then we add homemade soy sauce and sesame seed oil.

Q. There doesn’t seem to be any dull moment.
A. Exactly. I have to stick with it to the end, from sowing seeds to having new seeds fall on soil. I spend five to six months with each ingredient.

Q. How did the documentary or your overseas trips change your life and your cooking?
A. I haven’t changed a bit. If I hadn’t done those things, I would be doing a different type of practice. Walking, standing, sitting, lying down, speaking, staying quiet, moving or staying still. These are all part of ascetic practice. Food is in there somewhere, and to cook is to practice.

Q. You’ve been trying to promote virtues of temple food. Why do you think people today need to eat temple food?
A. With regular food, you only have the desire to eat it, and you end up just enjoying it, and nothing more. But by consuming food, we have to think about how food helps shape us, and how it allows us to do the things that we want to do.

Q. What’s your goal moving forward?
A. I don’t have one. I only want to stay in this moment. If I set a goal, it only gives me headaches. Why put that burden on yourself? If I am given some connection, then my job is to embrace it and make the most out of it in the particular moment. 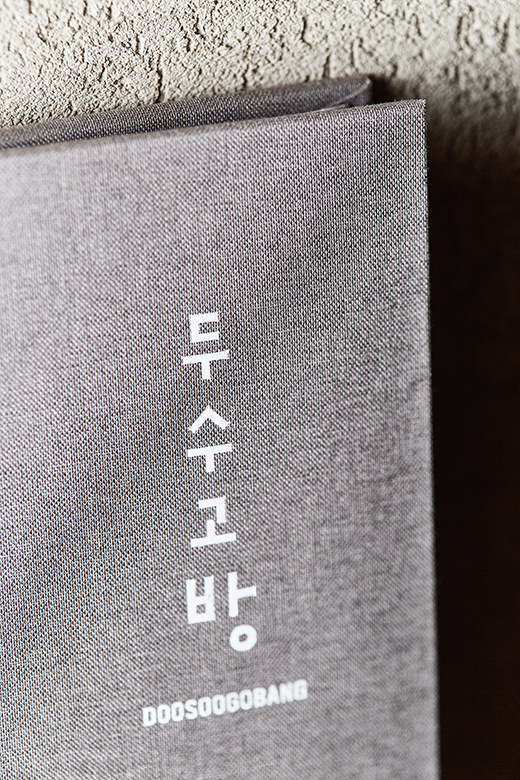