Mouthwatering Culinary Tour of Jeju Traditional Markets
Jeju marketplaces are filled with the island’s unique scents and flavors, such as the greasy smell of black pork barbeque, sweet citrusy aroma of tangerines, and fresh ocean scent of seafood.
The island of Jeju is a traveler’s paradise offering incredibly diverse sceneries featuring the highest peak in Korea, exotic palm trees, rows of cherry blossom trees and patches of canola flowers against the backdrop of black volcanic rocks, and the rolling waves of the blue ocean. Its breathtaking natural environment is probably the No. 1 reason why tourists crowd the island all year long. Having said that, the pleasure of traveling does not stop at admiring nature’s work. Experiencing the lifestyle of local people is also a big part of traveling. Traditional markets often provide a glimpse into the lives of the locals, including the food and play culture. Let’s indulge ourselves in the charms of Jeju-do by visiting some of the historic marketplaces.
Dongmun Traditional Market
Founded in 1945, Dongmun Traditional Market is the oldest permanent market in Jeju Island. The 9th Regiment of the National Defense Guard was established in Moseulpo in April 1946, and a subsequent increase in the traffic between the island and mainland resulted in the small street vendors selling disposable products and agricultural goods near Dongmun Rotary. The market gradually grew in size. Unfortunately there were a series of massive fires in 1953 and 1954, forcing the market to relocate to its current address. In the early 2000s, the marketplace was modernized and expanded. Nearby tourist attractions include Jeju Mokgwana and Ohyeondan.
Jeju Mokgwana used to be a central government complex where the magistrate of Jeju presided over administrative affairs during the Joseon era. It includes Gwandeokjeong, the oldest structure in Jeju, and former administrative facilities. The restoration project was completed in December 2002.
Ohyeondan is an altar dedicated to the five wise men who were either exiled or sent to Jeju in their official capacity and made great contributions to the development of the area during the Joseon dynasty. The ohyeon includes Uam Song Si-yeol, Cheongeum Kim Sang-heon, Donggye Jeong On, Chungam Kim Jeong, and Gyuam Song In-su. 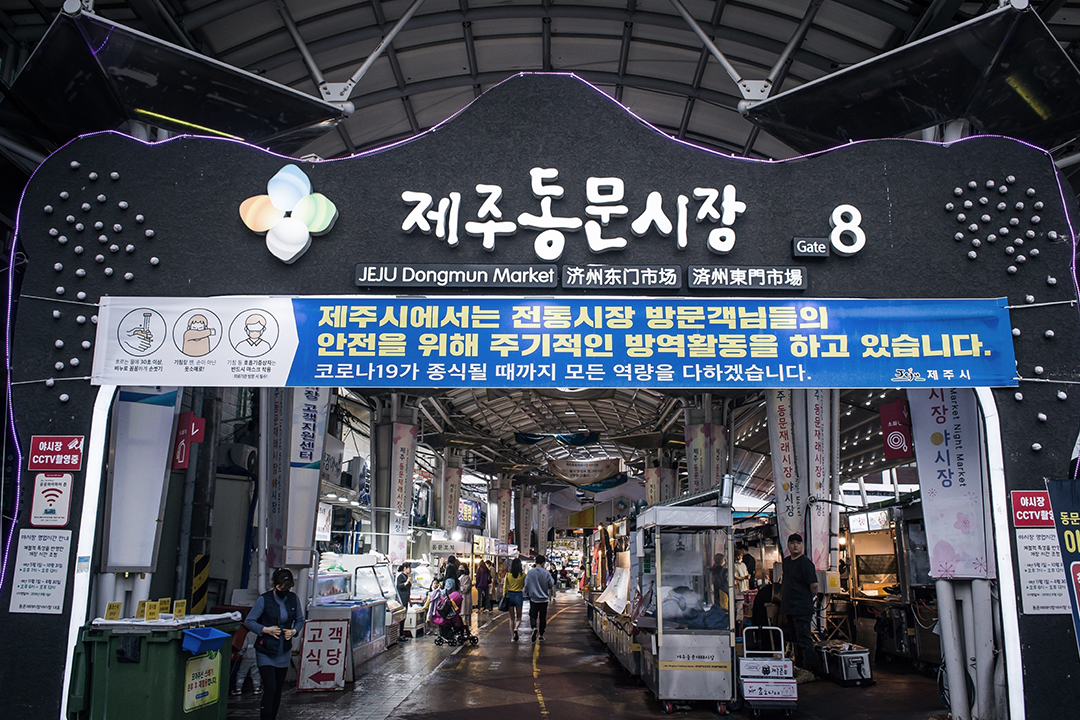 Entrance to Dongmun Traditional Market, the largest market in Jeju 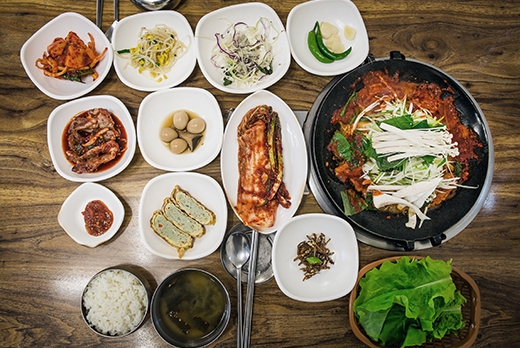 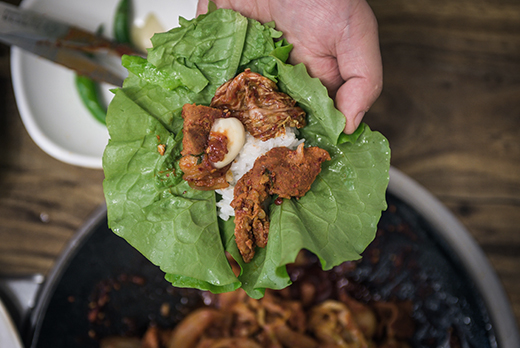 Taste of Jeju Pork: Dweji Bulbaek
There are small diners and food stands offering simple meal options in Dongmun Traditional Market. However, if you feel like you are not doing yourself justice by making do with light food in Jeju-do, try Ohyeon Bulbaek near the public parking exit that specializes in Korean BBQ. The restaurant became popular nationwide after comic artist Huh Young-man introduced it on TV, but it had already been one of the local favorites. Its dweji bulbaek dish presents a crimson-colored seasoning mixed with chopped garlic, green onions, onions, and shredded perilla leaves, for the effect of the typical Korean pork BBQ flavors. The restaurant uses only high-quality pork produced in Jeju. Depending on your preference, you can also choose to add small octopus or dried cuttlefish to be mixed with the pork. A meal set is served with various side dishes that are delicious. 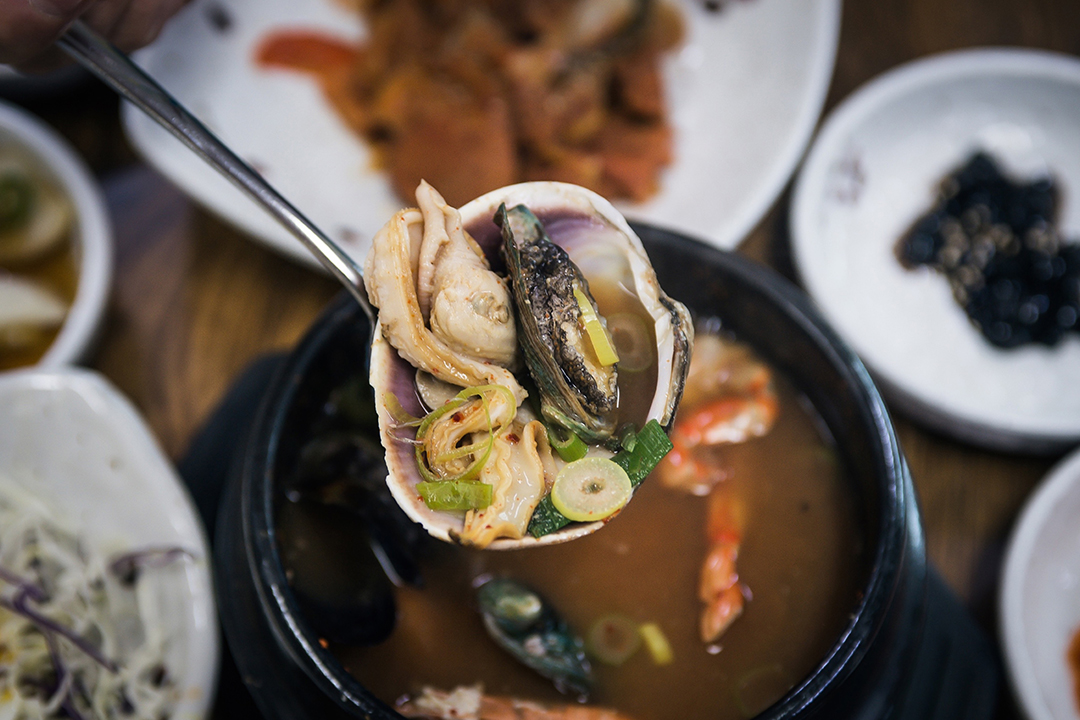 Bowlful of Jeju Seafood: Jeonbok Ttukbaegi
In Jeju-do, it’s always the matter of pork or seafood. The situation near Dongmun Traditional Market is similar. Next to the aforementioned Ohyeon Bulbaek stands Eoma Jang Jang, a popular seafood hot pot restaurant. Its signature hot pot of bean paste base mixed with crabs, mussels, red-banded lobsters, and clams almost always calls for one more bowl of rice. Its jeonbok ttukbaegi is cooked by adding fresh abalones to the seafood hot pot. The secret is to put the abalones in when the soup is boiling. For a small extra cost, you can add red-banded lobsters as well. For those traveling with a child, black pork cutlet could be a good choice. The restaurant is generous with basic side dishes including stir-fried spicy pork. 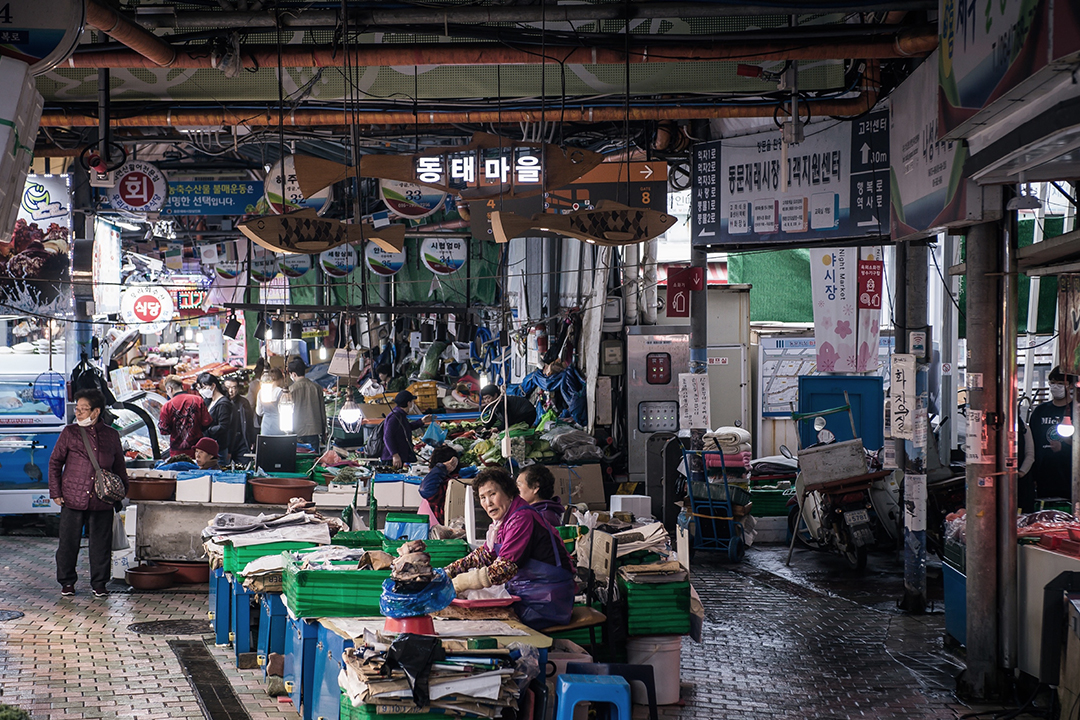 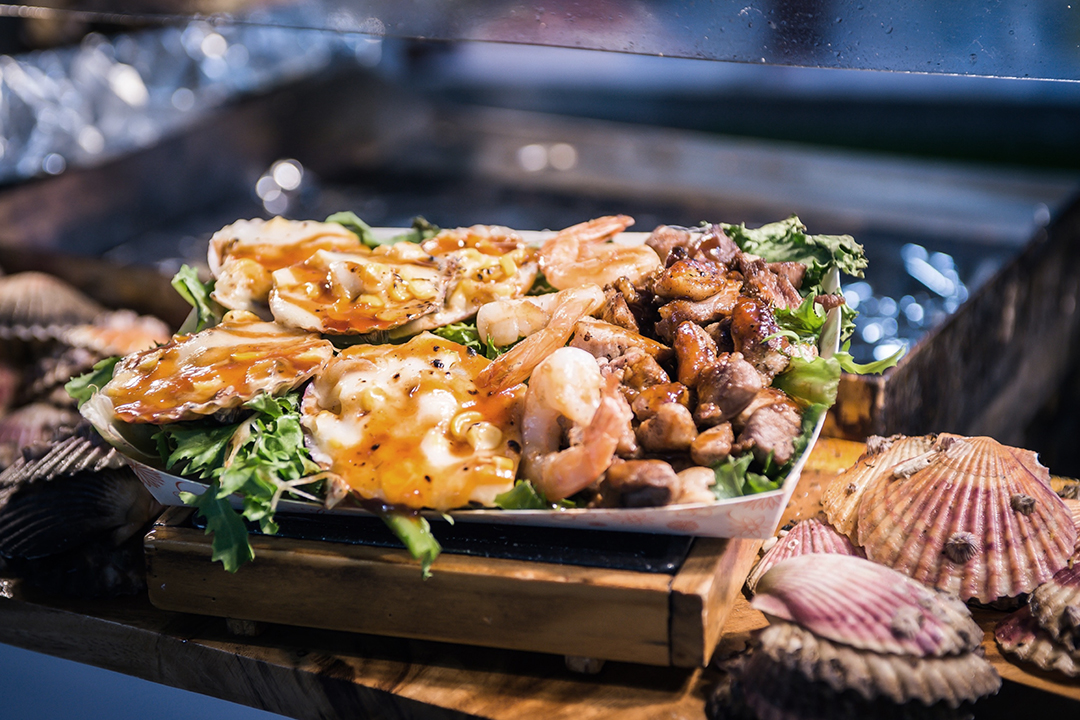 Black pork and seafood are staples inside Jeju markets. 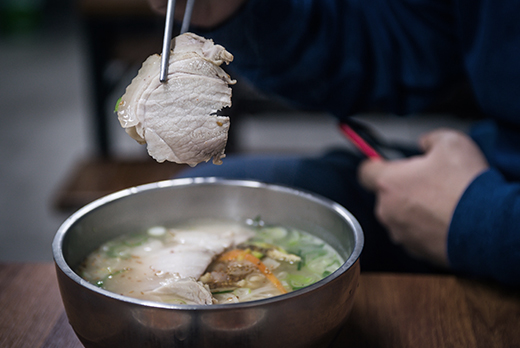 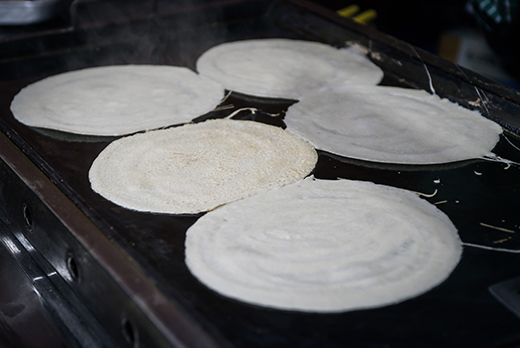 Food Options Inside Market
Dongmun Traditional Market offers local dishes that have existed for decades, as well as some of the latest trendy snacks. In the Sundaeguk alley, you can find the 50-year-old Gwangmyeong Restaurant. Neighboring Seonggong Restaurant and Junho Restaurant are also famous. Jeju sundaeguk, a Korean sausage soup, is known to provide a thick texture with deep flavors. Near the market’s exits No. 11-12, two old noodle shops stand: Geumbok Guksu and Dongjin Guksu. They are well-known for their use of pork bone broth with their noodles. Dried anchovy noodles or spicy noodles are on their menus as well. The founding mother of Geumbok Guksu, who turned 100 last year, used to show up for work until recently. Currently it is run by her daughter-in-law who inherited the restaurant’s kitchen in the 1970s. Near the exit No. 8 are restaurants that would have a greater appeal to younger generations with their international and trendy cuisines. Some of the food worth trying in the market are: egg dumpling tasting like a rolled omelet; hanayaki, a smaller version of okonomiyaki; mupping, a Thai grilled skewer; abalone gimbap; and mian bao xia, meaning fried shrimp sandwich. 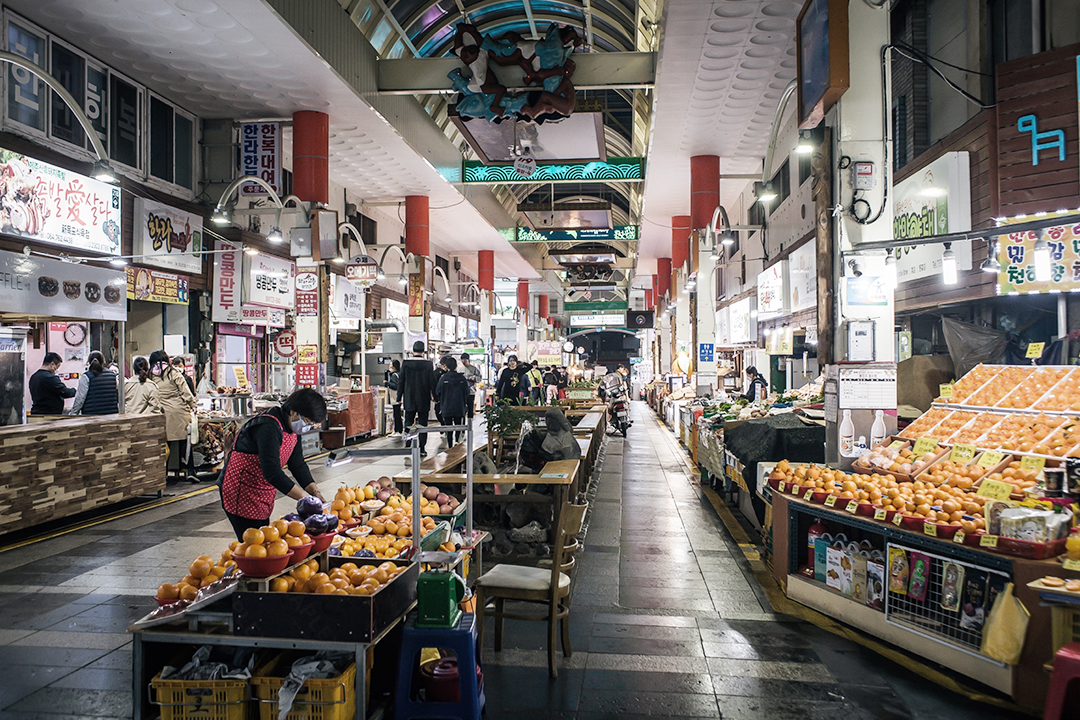 Seogwipo Maeil Olle Market
If Spain’s Primera Liga has Real Madrid and Barcelona FC, Jeju Island has Jeju-si and Seogwipo-si. In the southern city of Seogwipo, the biggest traditional marketplace is Seogwipo Maeil Olle Market. The formation of the market occurred gradually as merchants started gathering in one place in the 1960s for a marketplace which later became Seogwipo Maeil Market. In the 2000s, a major renovation of the arcade made shopping much more convenient. With the rising popularity of Jeju Olle trails, the market changed its name to Seogwipo Maeil Olle Market in 2010. Its strongest advantage, compared to other markets, is in its proximity to famous Seogwipo travel destinations. The name Seogwipo is related to Qin Shi Huang, the founder of Chinese Qin dynasty. After unifying China, the emperor ordered Seobok, also known as Xu Fu, to find the elixir of life. In search of the fabled plant, Seobok arrived at Jeongbang Falls in Jeju Island, became fascinated by its beauty, and in the end left the island without the elixir. According to this tale, ‘seo’ of Seobok, ‘gwi’ from a Chinese character meaning ‘to return,’ and ‘po’ from a Chinese character symbolizing ‘harbor’ made up the name Seogwipo. Jeongbang Falls is the only waterfall in Asia directly connected to the sea. There is Seobok Exhibition Hall, only steps away from the falls, commemorating the visit by the Chinese explorer. It’s also a good place to take a walk. Meanwhile, Cheonjiyeon Falls are often admired as being part of an enchanted land as opposed to the secular world. 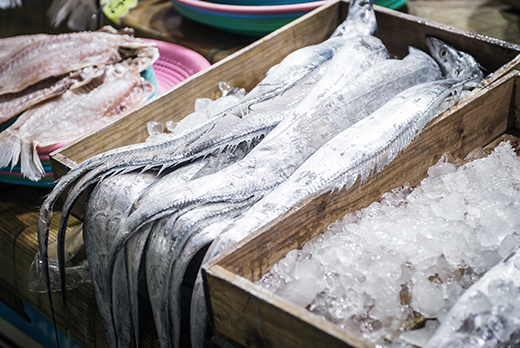 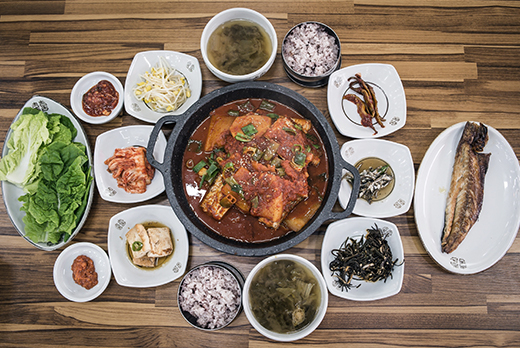 Jeju Aristocrat, Galchi aka Hairtail
Seogwipo Maeil Olle Market is smaller than Dongmun Traditional Market. It offers plenty of choices for snacks but not too many restaurants. However, just a few steps from the Olle market will take you to a cluster of restaurants serving braised hairtail, known as galchi jorim in Korean. Negeori Sikdang, Jorim Myeongga, and Hwajeong Sikdang are all famous for their top-quality hairtail dishes. By using fresh hairtail caught in the sea of Jeju, the restaurants ensure the fish is meaty, soft to chew, and odorless. The braised fish is not too spicy and can be enjoyed by children as well. Another grilled fish is separately served as a side dish. Fitting for its quality and popularity, Jeju’s silver galchi is not cheap. But it definitely is worth a try. 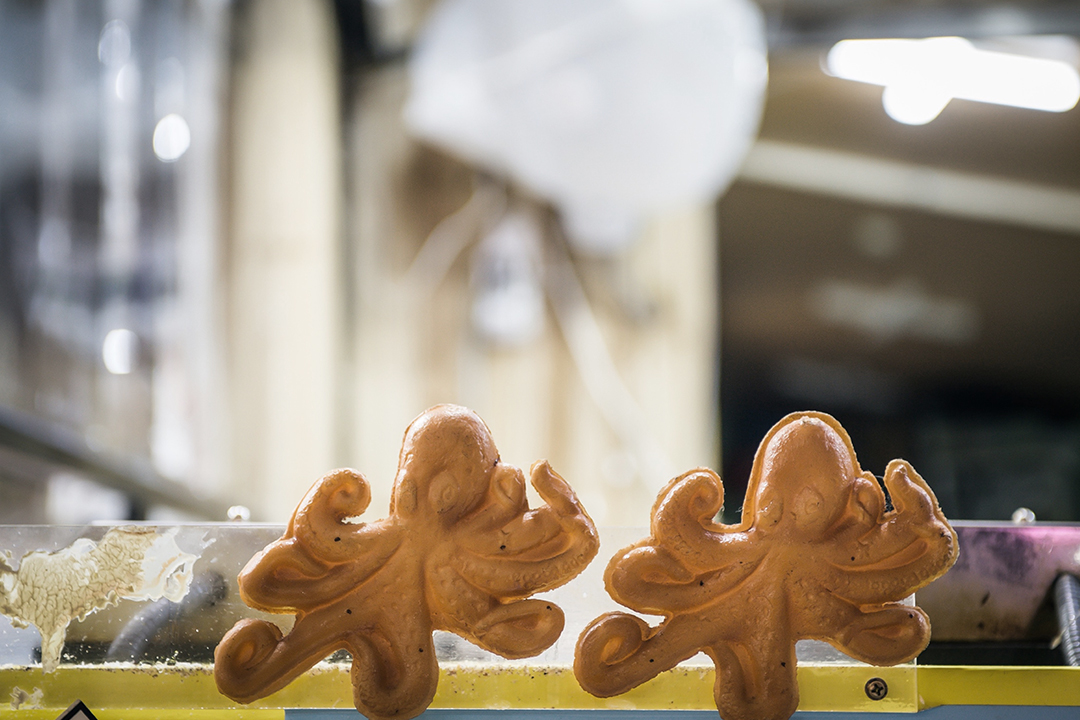 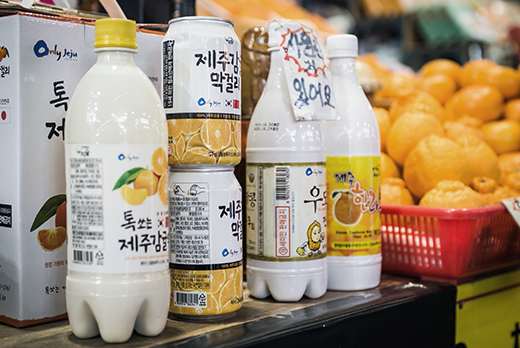 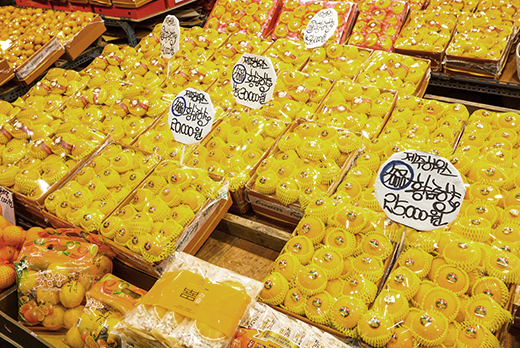 You can find beverages made of tangerine, Hallabong and Cheonhyehyang at virtually every market.

Citrus Fruit Trio
Seogwipo is the center of citrus fruit farming in Jeju-do. As you walk around Seogwipo Maeil Olle Market, you will see a variety of tangerines and oranges as well as snacks made from them. The Hallabong cookie is more like bread or manju, a traditional Japanese confection. Its filling contains Hallabong juice, making it less sweet and easier to eat compared to a piece of manju. There are many kinds of citrus juice products that can be found in the market. Their names vary, from Jinjihyang, Cheonhyehyang, Cheonggyul(green citrus), JJ-Redhyang, to Hallabong, but most of them mix citrus juice with sweeter-flavored Hallabong extract. The method of extraction also affects the flavor of juice. If the rind is included in extraction, the juice will have a slightly bitter taste. Citrus fruits are being used in a growing number of products including chocolates, drinks, jellies, and even makgeolli. 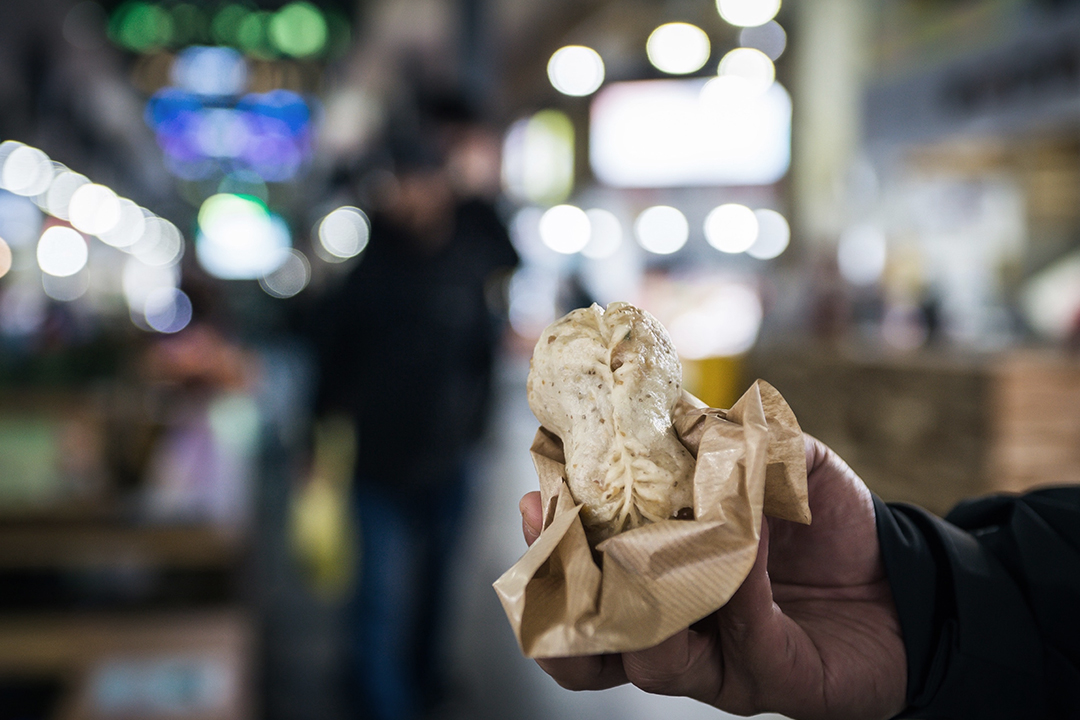 Novelty Dumplings of Seogwipo
If you don’t have any interest in tasting the sour fruits mentioned above, we recommend you take the opposite route and try savory desserts available in Jeju Island. Udo, located in the south of Jeju, is a small island with fertile soil. Naturally farming is more advanced than fishing in Udo. In particular, peanuts grown in Udo are famous for their rich flavor despite their smaller size. You may find Udo peanut ice cream to replace Hallabong ice cream at Seogwipo Maeil Olle Market. There is also something called peanut dumpling. Ground peanuts are mixed with the dough that will be made into a peanut-shaped dumpling. The explosive nuttiness of peanut dumpling can be enjoyed with either kimchi or meat fillings. 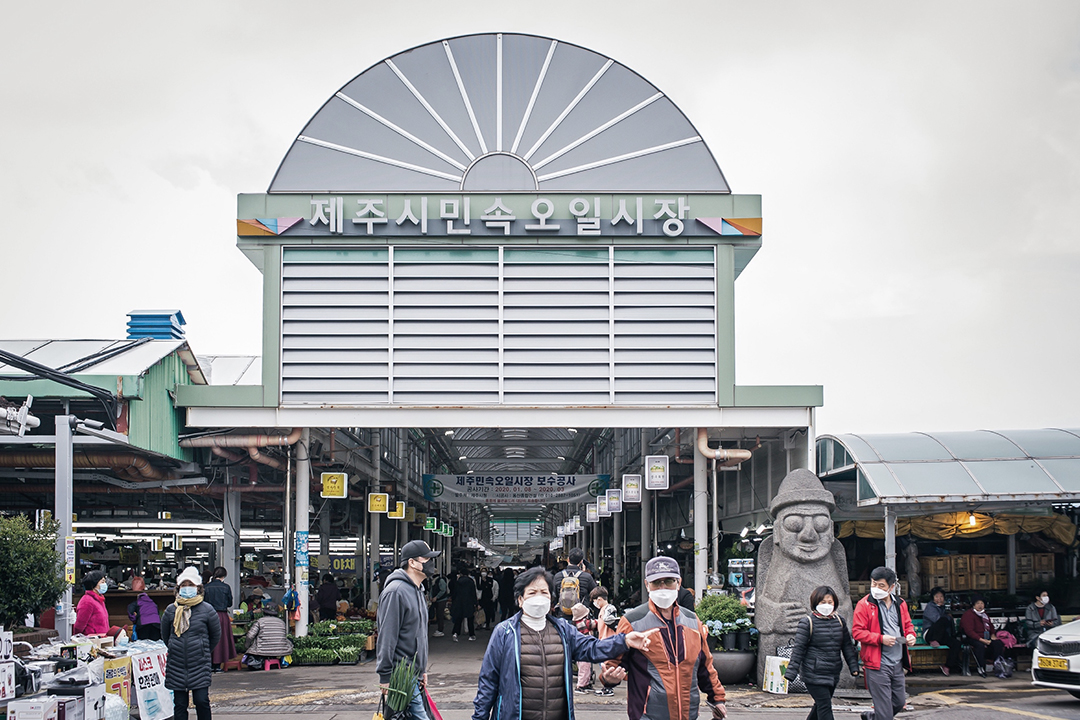 Jeju Minsok Five-Day Market
Jeju Island is a place where cutting edge meets tradition in an unexpected way. The five-day market, which opens every five days, represents the old Jeju. Among the 28 traditional marketplaces in Jeju, there are 10 five-day markets: Jeju Minsok, Hallim, Daejeong, Jungmun, Seogwipo, Pyoseon, Seongsan, Goseong, Sehwa, and Hamdeok. Smaller-scale markets tend to close early around the end of lunch time. As the biggest five-day market in the island, Jeju Minsok Five-Day Market stays open from early morning to six o’clock in the afternoon, attracting a large crowd. Five-day markets offer a more friendly environment than permanent markets. If your schedule allows it, we strongly recommend you check out the five-day market. A reminder: expect traffic congestion on the market day and plan your visit with enough time left for check-in and boarding at the airport. 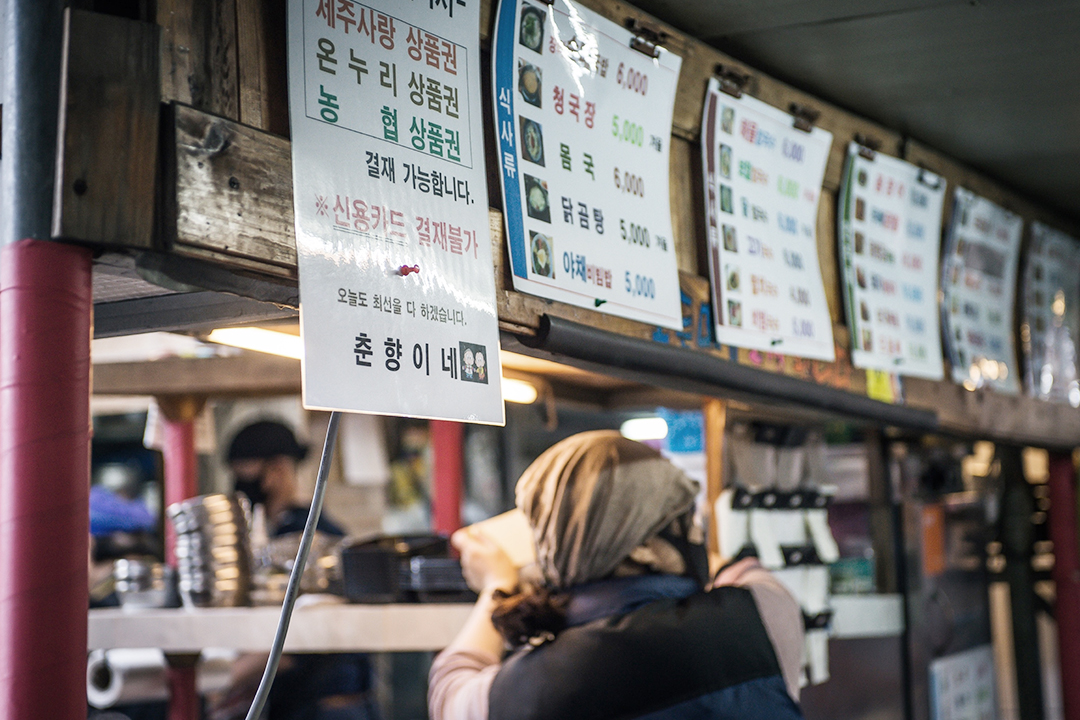 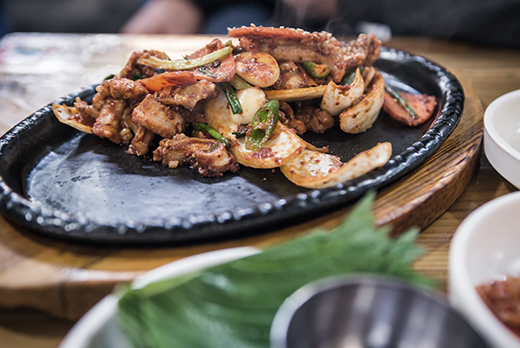 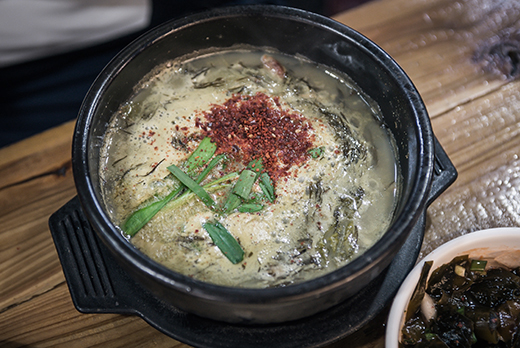 Merry Drinking in Market
Among many restaurants in the market, Chunhyangine is the most famous. It offers Korean sausage and rice soup and gulfweed soup for dining options, while assorted Korean sausage(sundae), stir-fried eel, dombe meat, and green-onion pancake are popular snacks served with alcoholic beverages. With the menu ranging around 10,000 won in price, the restaurant is always filled with market customers. The tables rotate fast and it is hard to find a customer drinking too much. It’s a perfect place to enjoy Jeju makgeolli if you have a dry mouth. Halmangbingtteok across the street is also well-known. Jeju-style buckwheat pancake, in which a buckwheat wrap is rolled around seasoned radish, is the island’s specialty. It tastes a bit bland, different from Gangwon-do’s buckwheat crepe that has a kimchi stuffing. It can be eaten warm or cold. The pleasure of discovering local food at traditional marketplaces makes your trip more rewarding. If you want to avoid eating at the market, you can go to Haeoreum Restaurant in front of Jeju Minsok Five-Day Market to try Jeju black pork. 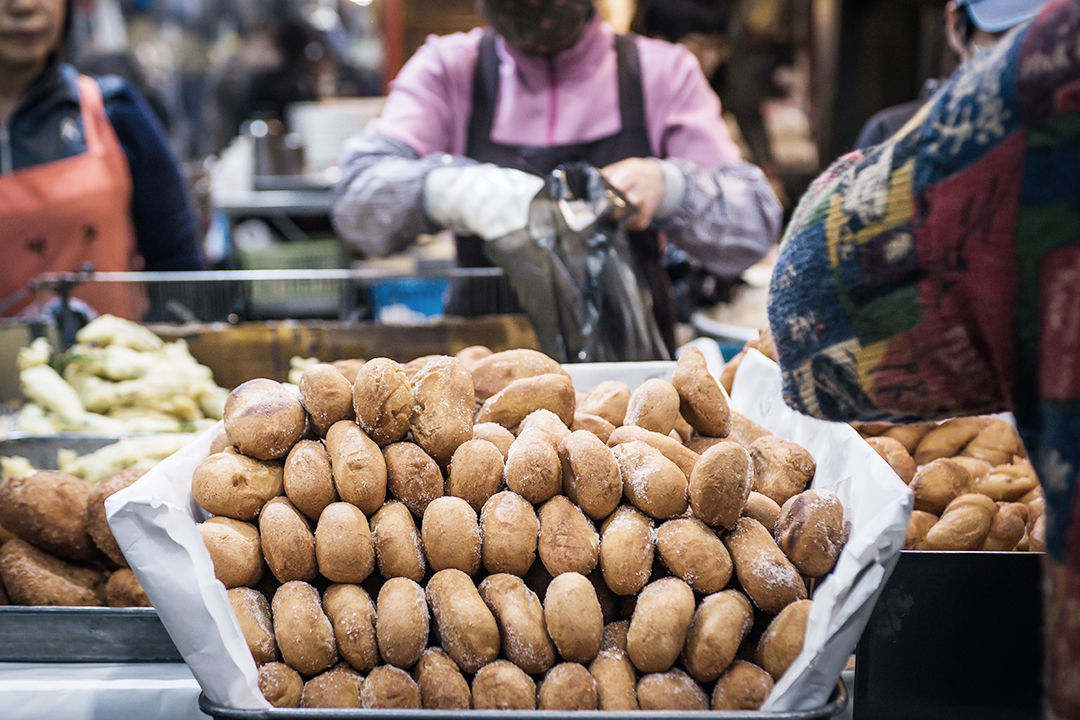 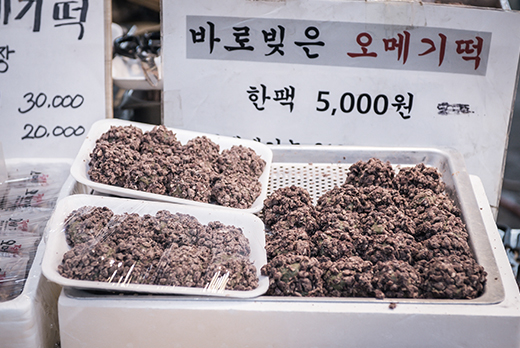 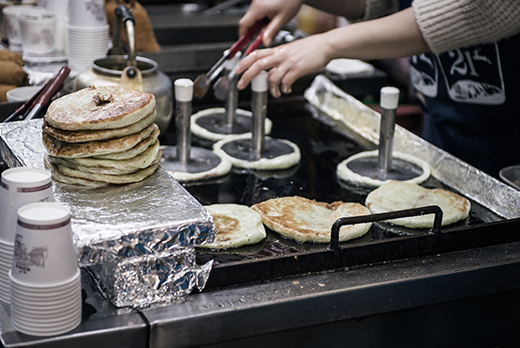 Donuts, Hotteok, and Tteokbokki
Typical snacks you come across in any traditional market are popular at Jeju Minsok Five-Day Market as well. Ttangkko Bunsik selling stir-fried rice cake(tteokbokki) and donuts is probably the most frequented store in the market. Its twisted breadsticks and donuts are cooked in the old style, taking you back in time to the 1980s-1990s period. Right next to it stands a cassette tape vendor, sending you on a time travel yet again. Several hotteok(Korean pancakes filled with brown sugar) stands near the seafood corner are crowded with customers in line. Bigger and cheaper than its mainland counterpart, Jeju hotteok is a sign of generosity and hospitality in the island. Make sure you bring cash as it’s hard to find a store accepting credit cards.