Seoul Sticker Shop, Ultimate Stop for Stickers in Seoul
Samcheong-dong in Seoul is home to Seoul Sticker Shop. The store sells stickers that promote the South Korean capital city.
Back during Ancient Greece and Egypt, people left marks on objects so they knew who made them. In Northern Europe, even domestic animals had marks showing their owners. This act was called ‘bran.’ It had the same meaning as the English word ‘burn,’ and it gave birth to the word ‘brand.’
Let’s think about brands for a moment. What makes a good brand? Can the city of Seoul be one? A visit to Seoul Sticker Shop got us thinking about brands. 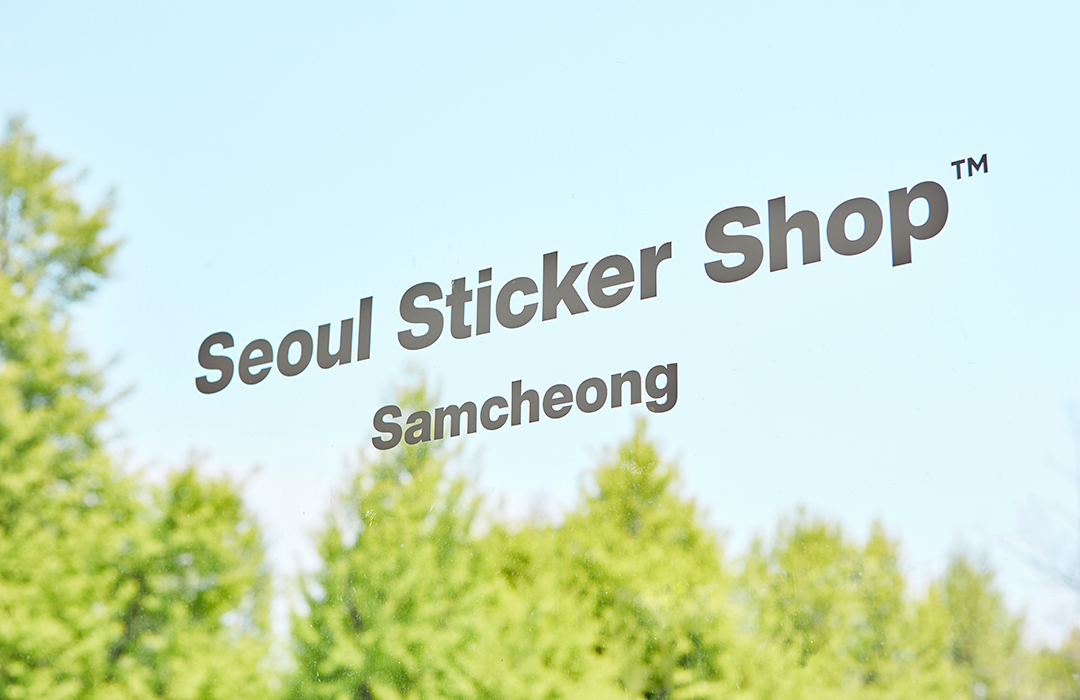 Seoul as a Brand
Samcheong-ro refers to the two-lane, one-way street that stretches behind Dongsipjagak, which stands to the right of Gwanghwamun when viewed from the front. When you walk on Samscheong-ro along the stonewalls of Gyeongbokgung, you’ll pass the National Museum of Modern and Contemporary Art, Seoul, and other galleries and shops of varying sizes. For decades, the street has had the city’s top private art museums.
When you reach Samcheong Police Precinct, you’ll see Seoul Sticker Shop on the second floor of the building standing next to it. The name tells you all you need to know about what the shop is selling. But that you would wonder: does this name mean the shop sells stickers “in” Seoul? Or does it sell stickers “about” Seoul? 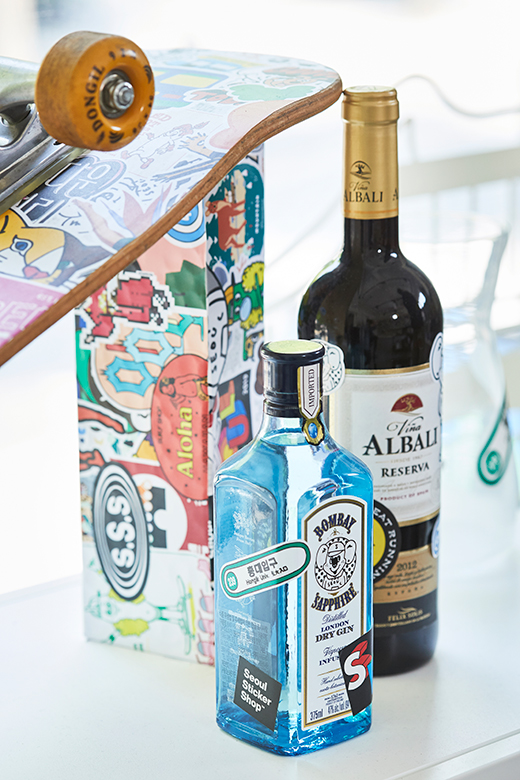 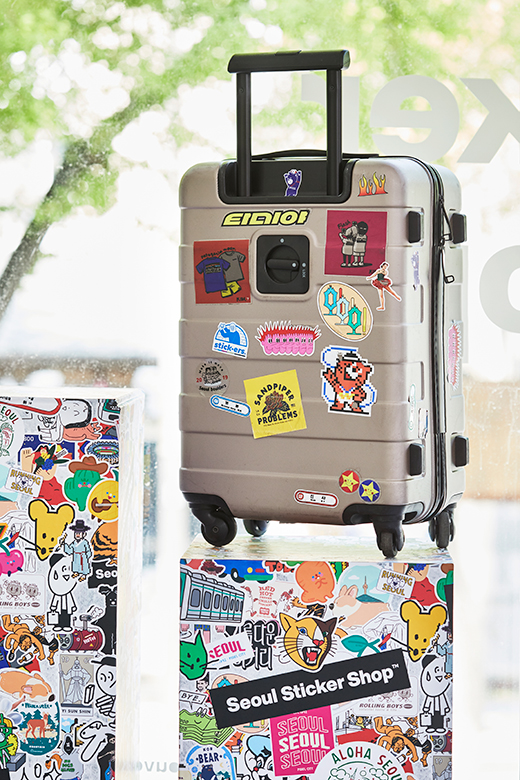 You can decorate your everyday items with stickers. 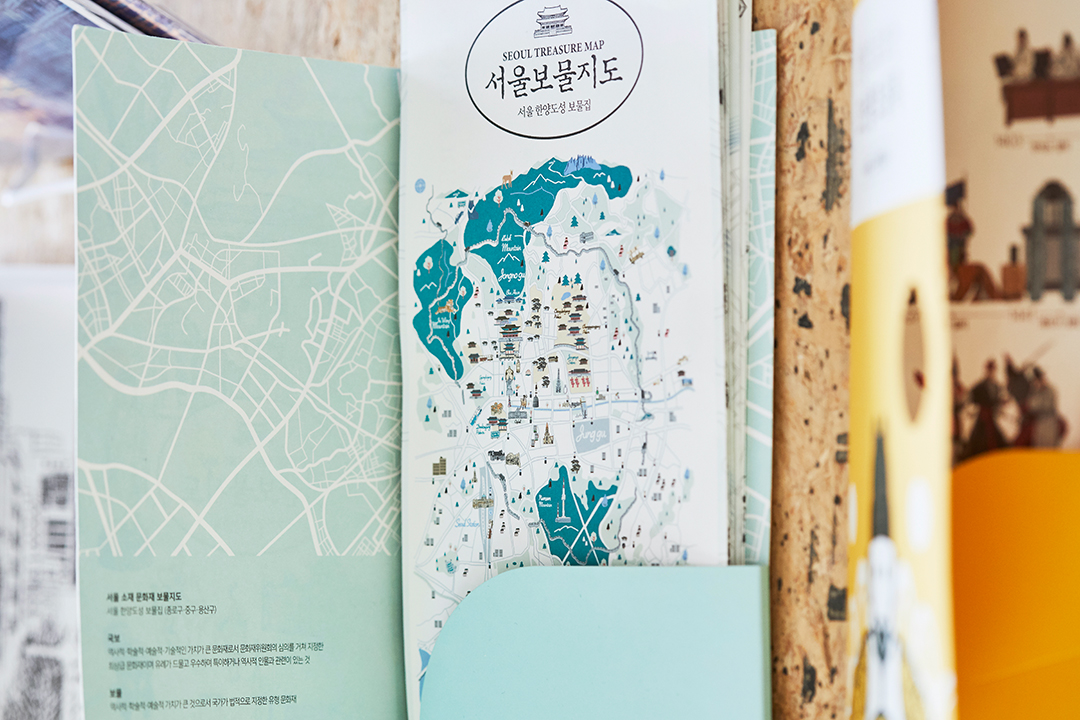 On top of stickers about Seoul, the shop sells other products.

Lee Dong-hoon, designer from Ours, opened Seoul Sticker Shop late last year. And yes, it does sell stickers. Lee had been collecting stickers whenever he traveled overseas, and he found out there were quite a few people who had the same hobby. On his trips, Lee often saw tourists purchasing stickers at sticker shops or souvenir shops. He decided it’d be fun to combine his graphic design, which is his day job, with stickers. 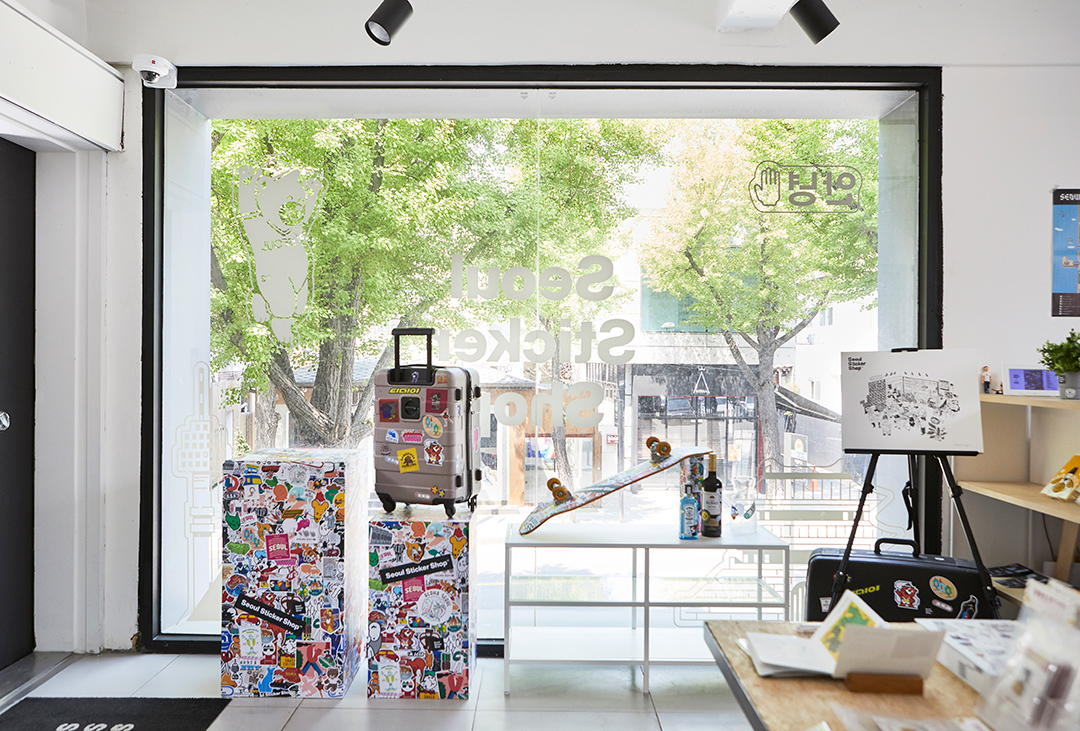 This window is visible from Samcheong-ro.

So he opened the shop on the second floor of Samcheong-ro Tourist Information Center. It may not be readily visible from outside, but once you locate it, the shop will just tell you, ‘This is the place that sells stickers.’ The shop is packed with stickers and other merchandise. There are about 300 types of stickers available at the shop. And each item bears the name of its designer. Stickers all have their distinctive features, and one other common thread emerges: Seoul. Designers have portrayed the city of Seoul using their own graphic, and it’s fun to compare different styles. This gives us the answer to the question posed above: This is a shop in Seoul that sells stickers about Seoul.
Lee, who came in a white jumper while sporting a beard, had his convictions about stickers, brand values of Seoul and design. 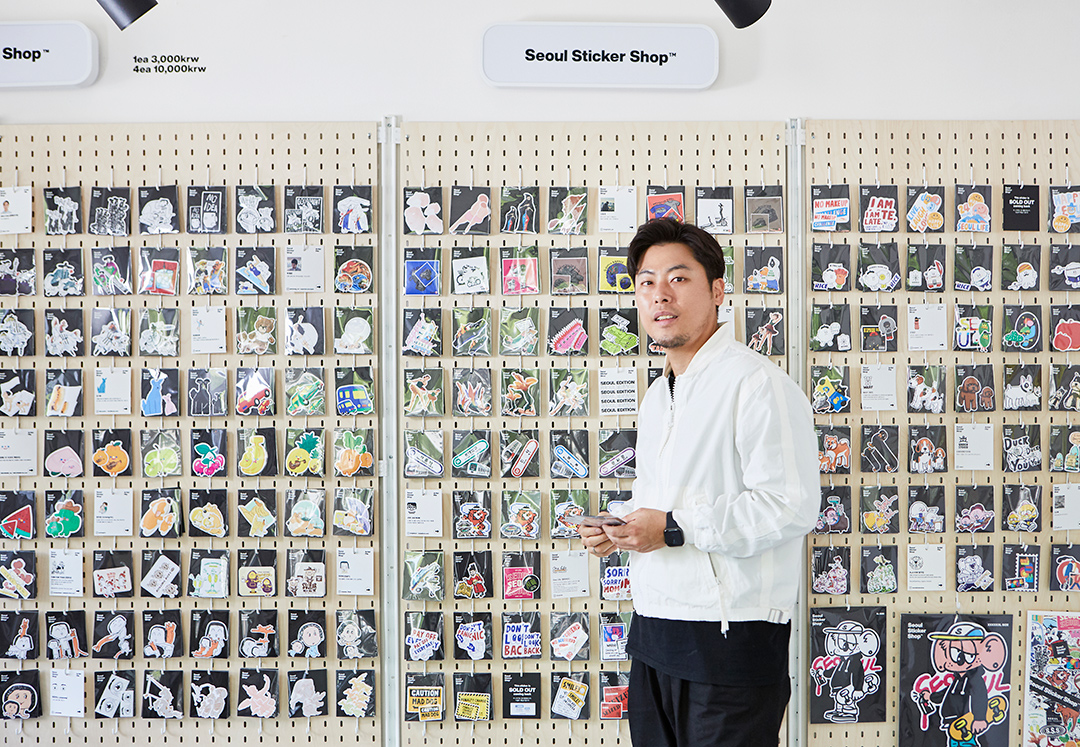 Designer Lee Dong-hoon is interested in turning Seoul into a brand.

Q. The name ‘Seoul Sticker Shop’ is quite interesting. Why did you come up with that name?
A. I would buy a ton of stickers and souvenirs whenever I went traveling. I felt I could capitalize on my skill set as a designer and figured the name should be easy to remember. I wanted the shop’s name to be self-explanatory. Since I am doing this in Seoul, I wanted the word Seoul somewhere. And since I am selling stickers, I wanted the word Shop. It could be called SSS. It was fun and meaningful at the same time.

Q. Why stickers?
A. I majored in visual design, and I am a Seoulite. So I felt it’d be meaningful to express Seoul in design terms. In Japan and several other countries, small communities use design in different ways to showcase their local identity. We could do that on key chains, on hanbok-clad dolls or on something with the letters representing Korea. But I felt if I could do that with stickers, which I really like, then designers would have so many more options. 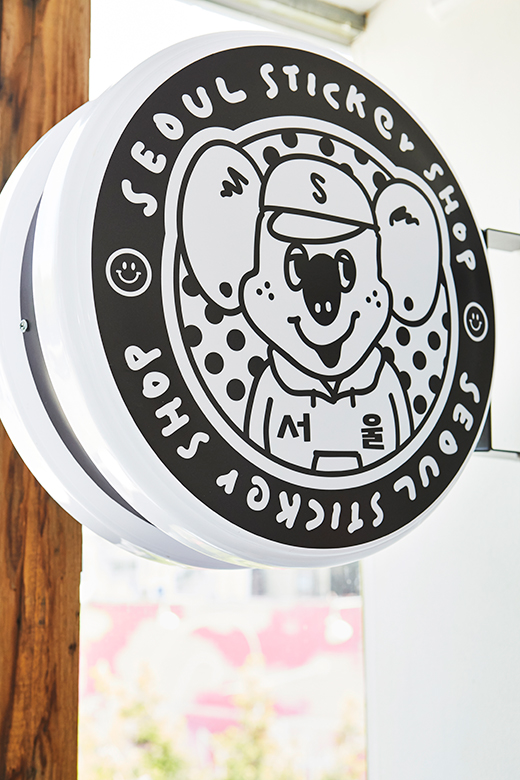 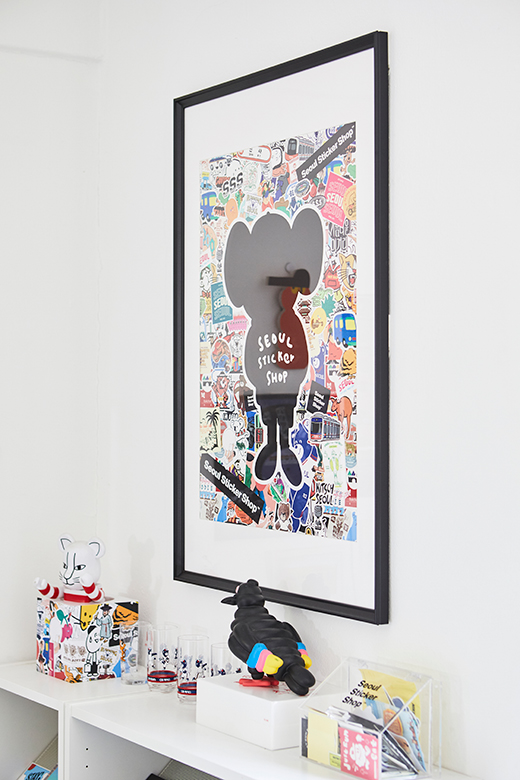 Q. Were you always interested in local branding and souvenirs?
A. I started out by working as a designer at a branding firm. At Korea SMEs and Startups Agency, I worked on integrating local staples into a brand. Other countries had done an excellent job with that. We didn’t have much of it at the time. That’s why I took interest.

Q. Is this shop an extension of that?
A. I absolutely love buying souvenirs. I pick up everything. And I wanted this shop to provide that sort of fun experience for travelers. In Japan, I went to a shop that looked really sophisticated and hip, but was selling traditional goods. And since several of those shops were all clustered, they seemed to wield some cultural influence. I wanted to come up with a new type of souvenirs that wasn’t so clichéd and that people could easily fall in love with.

Q. And we can find shops like that easily in other countries.
A. Exactly. And we can now in Seoul. In other countries, there are people who cater to smaller communities and neighborhoods. I’ve created brands for scented candle and hats, and even designed characters for street foods of Seoul. But it wasn’t so simple trying to explain the city. 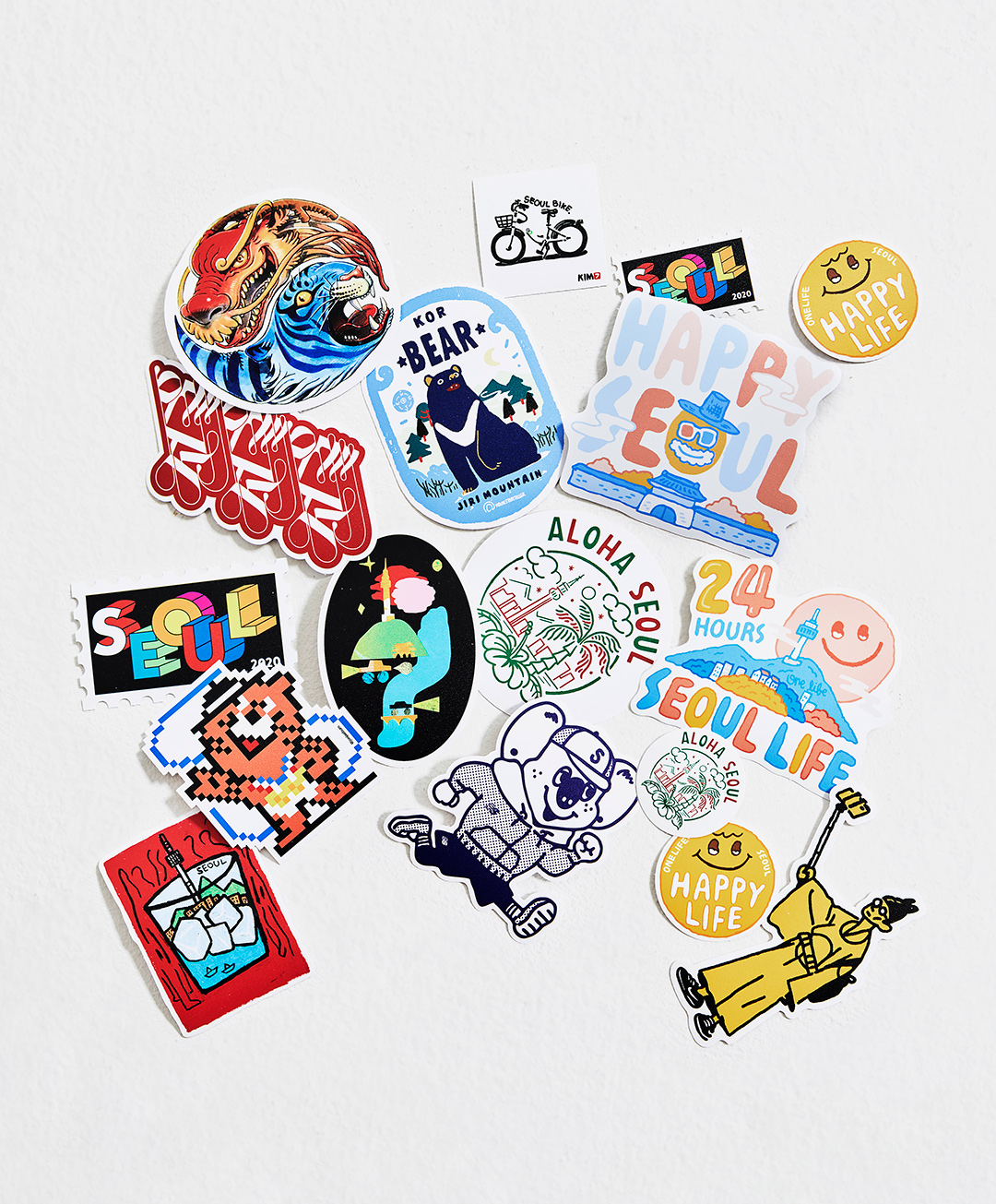 Q. So you’re bringing Seoul and stickers together. Did you want to highlight Seoul as a community?
A. In a way, yes. It could be about being in Seoul and also about representing Seoul.

Q. How do you go about making stickers?
A. I felt like I had to make a ton of stickers. It wasn’t enough for me to make just 10 or 20 of those. So I reached out to other designers for help. Once they handed over their design, I did all the production, and then they would get portions of our sales. I guess my whole idea was to have fun doing this together. And I told those designers that I would guarantee the quality of stickers, so I wouldn’t spoil their work.

Q. How many designers did you recruit at first?
A. In the beginning, I worked with about seven or eight designers that I had been close with. And then I started sending emails to designers I wanted to work with. And I made sure to highlight artists when I put stickers on display. Since I am a designer myself, I am working on some products, and today, I have about 29 designers working with me. There will be more down the road. 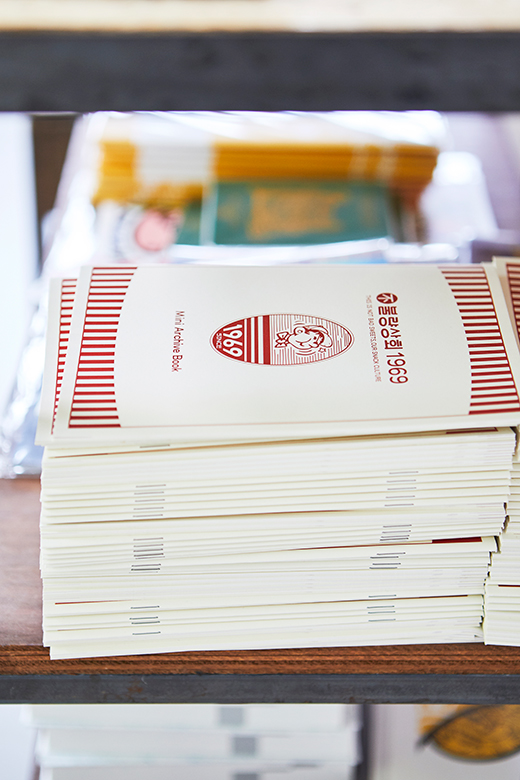 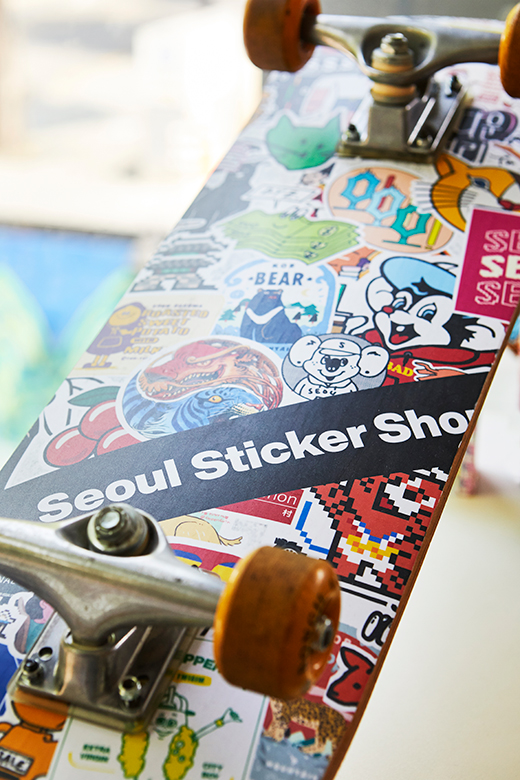 Q. Have you always collected stickers?
A. I would always buy stickers or some unique souvenirs whenever I traveled. You can express yourself with stickers, just like letters on a t-shirt. For instance, when you look people working on laptops at a café, you could tell a little about them by the stickers on those devices. We have skeleton stickers at our shop. Foreign tourists with hardcore accessories, or at least those who drip with something hardcore, buy those stickers. Stickers are kind of like the graphic that represents you.

Q. Do you consciously try to make stickers that have Korean feels to them?
A. At first, I found it difficult to ask artists to make any specific style of products. But now, I tell them they should have something in there that represents Seoul, even if it may not be so obvious. Foreign tourists tend to prefer something that is distinctively Seoul or Korean.

Q. Can the Korean style become a brand on its own?
A. I think the recognition for Seoul as a brand has gone through the roof. I realized that at a famous sports goods store. The word ‘Seoul’ was printed under a logo. It’s become something that people now wear. And Koreans don’t feel awkward or embarrassed wearing that name. It’s not just among foreigners; I think Koreans consume Seoul as a brand and a style. 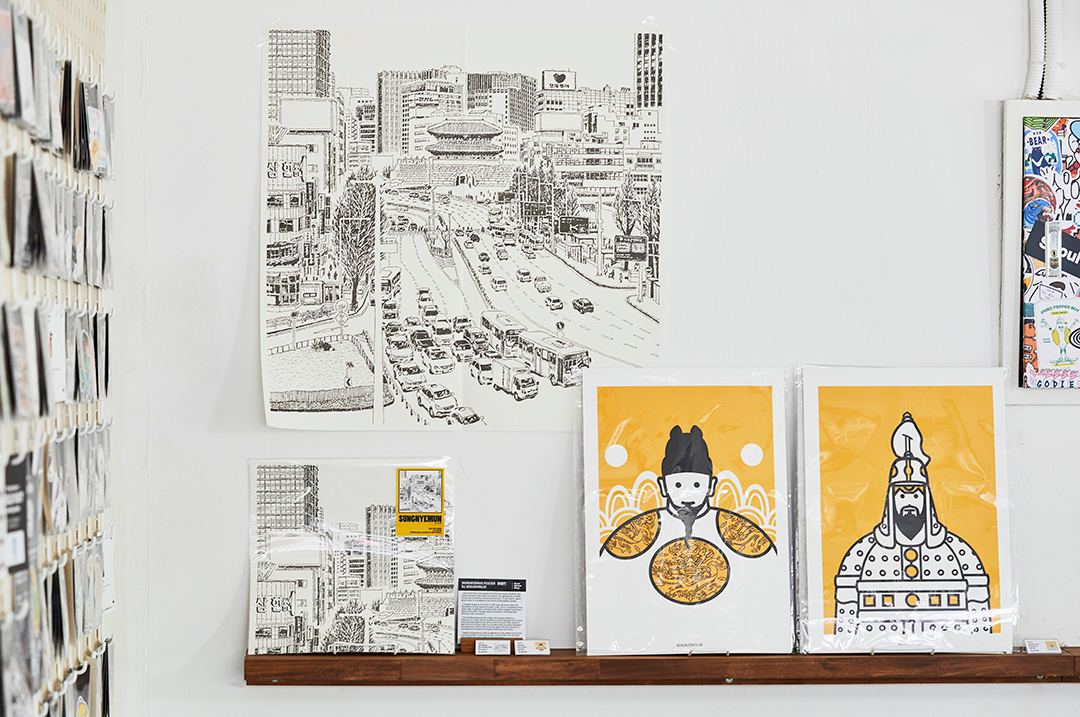 Q. People used to feel embarrassed about that.
A. That’s no longer the case. We’re selling a lot of prints or design with the word Seoul on it. Independent bookstores do projects on Seoul. Artists think Seoul is a fascinating city. I think Busan and Jeju Island are in the same category.

Q. Do you plan to expand beyond stickers?
A. I’ll do so gradually. I plan to showcase things I’ve collected. Foreign tourists especially get a kick out of the 1988 Seoul Olympics Hodori pins and old OB Bears merchandise. I am planning on setting up a pop-up store of sort, just like how a museum sets up a pop-up store for stickers about that museum.

Q. Are you working on any other projects?
A. Seoul Sticker Shop in acronym is SSS. And I am trying to do something with another SSS, Self Souvenir Service. For instance, I could work with other artists to make posters or sticker books. It’d be great if we can gather once a year. Or I could work with some café to give out stickers for promotion, just as how toys are included in fast food combos for children. I don’t want to rush anything. I just want to take it slowly and have fun doing it.