8 Korean Drinks You Must Have Now
Forget, for a moment, about your conventional idea of traditional Korean alcohol. Today, drinks that come in sleek packaging, with great taste to boot, are all the rage. From unrefined drinks to distilled liquor and wine, we have you covered.
Korean drinks are on the rise. And we aren’t just talking about drinks that have been pushed aside as uninspiring “traditional” liquors. One noteworthy development is that there are so many different ways to get your hands on Korean drinks now. In addition to bars and liquor shops, you can find Korean alcohols at fine dining restaurants and hotels. With online retailing now permitted, you can order your drinks from a wide range of websites, which has helped with the growing popularity of these drinks. As people are staying home more during the COVID-19 pandemic, the online sales of Korean liquors have gone up. Korean alcohols will continue to find their way into many homes. 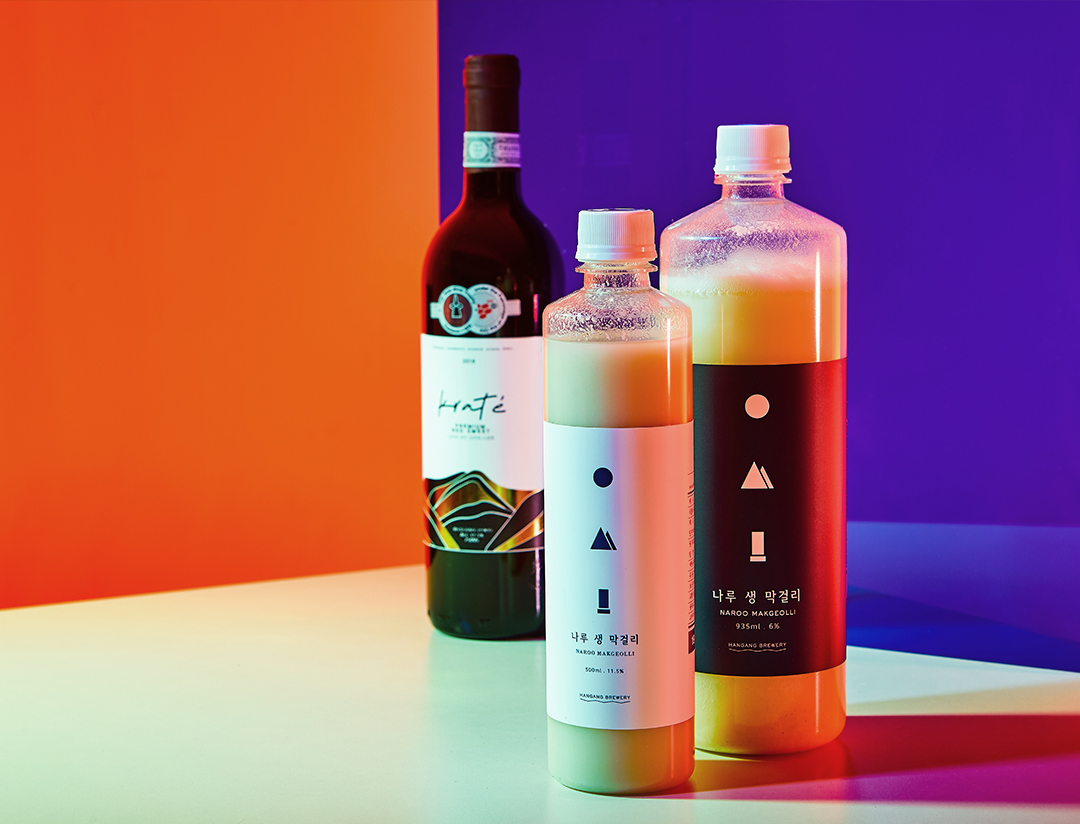 Another factor is that we’re seeing some competitive products. Sleek packaging and design are appealing to the younger generation, and these alcoholic drinks come in many different flavors, using a whole variety of ingredients. Breweries are opting to leave out artificial sweeteners and are producing more premium drinks made of natural ingredients. Last year, second-generation brewers and young brewers in their 20s and 30s set up shops across the nation. More and more people have become interested in visiting breweries themselves to see how these drinks are being made. Drinking Korean liquors has become a cultural trend. So what are some of the must-drink Korean alcohols? These are our picks.

Unrefined drinks are made by filtering clean alcohol in its natural form. By the liquor tax law, it’s defined as a muddy type of beverage made of suldeot (mash) fermented with water and nuruk (starter culture) as ingredients. 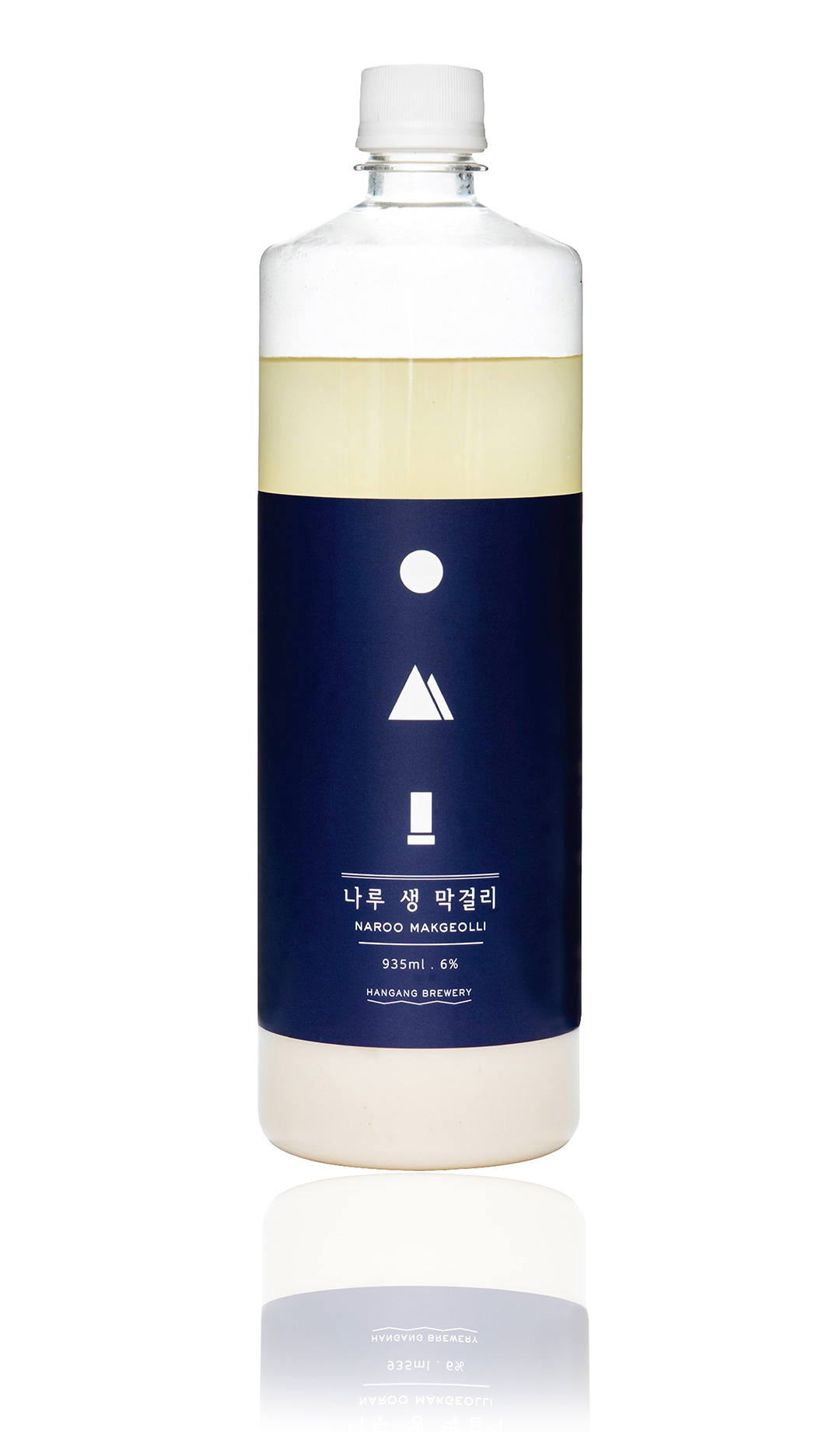 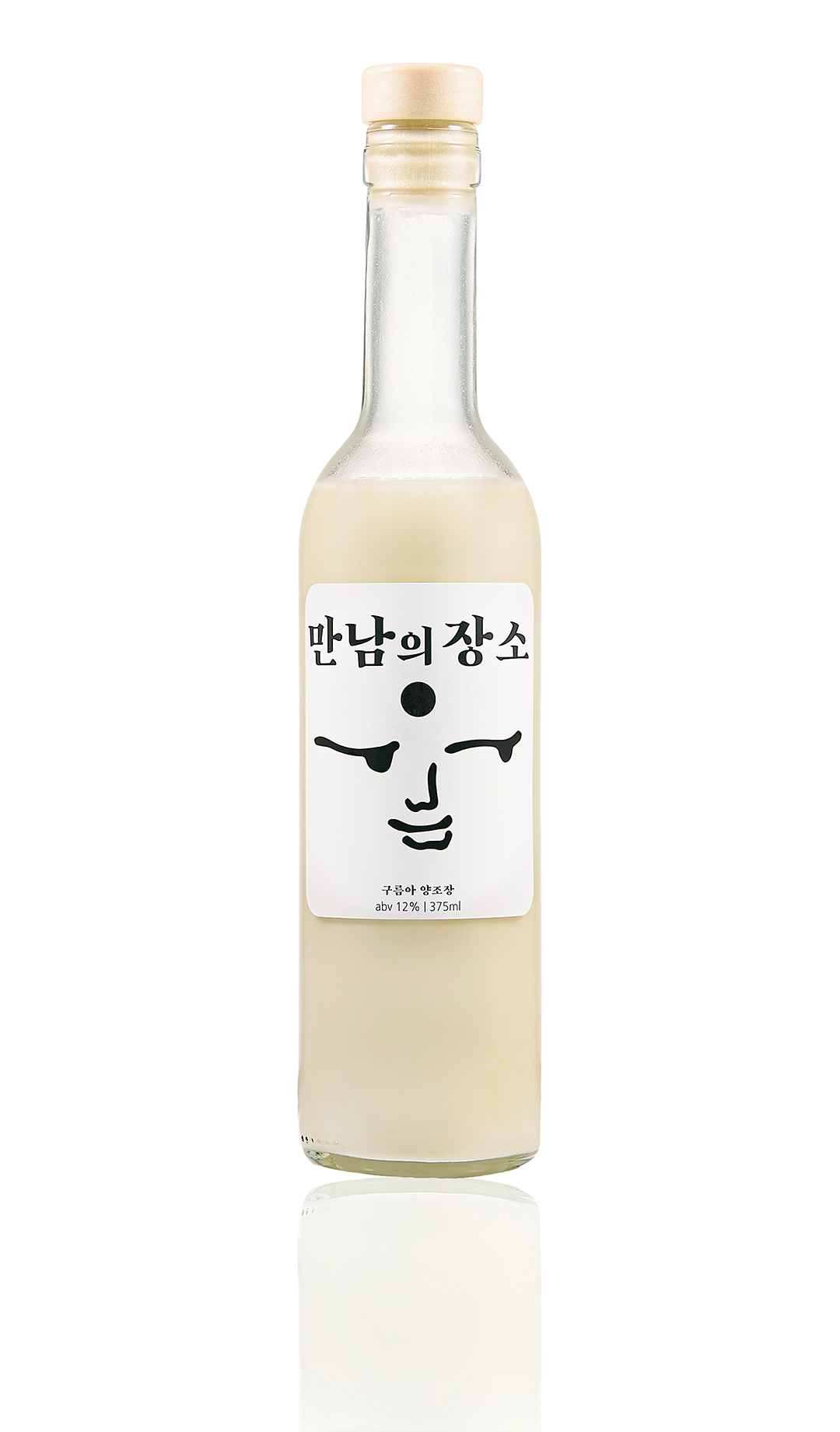 Naru Saeng Makgeolli
It’s the makgeolli produced by ‘Hangang Brewery,’ an up-and-coming brewery in Seoul’s Seongsu-dong. It’s billed as the ‘authentic Seoul makgeolli,’ and has remained widely popular since its launch in 2019. It uses Gyeongbokgung rice harvested using freshwater snail farming technology in Seoul, and has no artificial sweetener. It has higher rice content than ordinary makgeolli, allowing you to taste the soft flavor and texture of rice. At 6% alcohol, it has the right amount of sweet, grainy note, and it goes down easy.
Hangang Brewery hangangbrewery.com
Meeting Place
This is the new beverage by Guruma Brewery, which set up shop in Seoul’s Mapo area. Odaemi rice from Cherwon is the main ingredient, with a mix of lemon, raisin, peppercorn and ginger. Everything is done by hand, and the label shows the numbering on when it was produced in what batch. Inspired by Gilt-bronze Maitreya in Meditation, the face on the bottle gives it a distinctive look. These beverages are only available on Instagram and they go quite fast.
Guruma Brewery www.instagram.com/gurumabrewery

These are clear beverages using rice, nuruk and water. 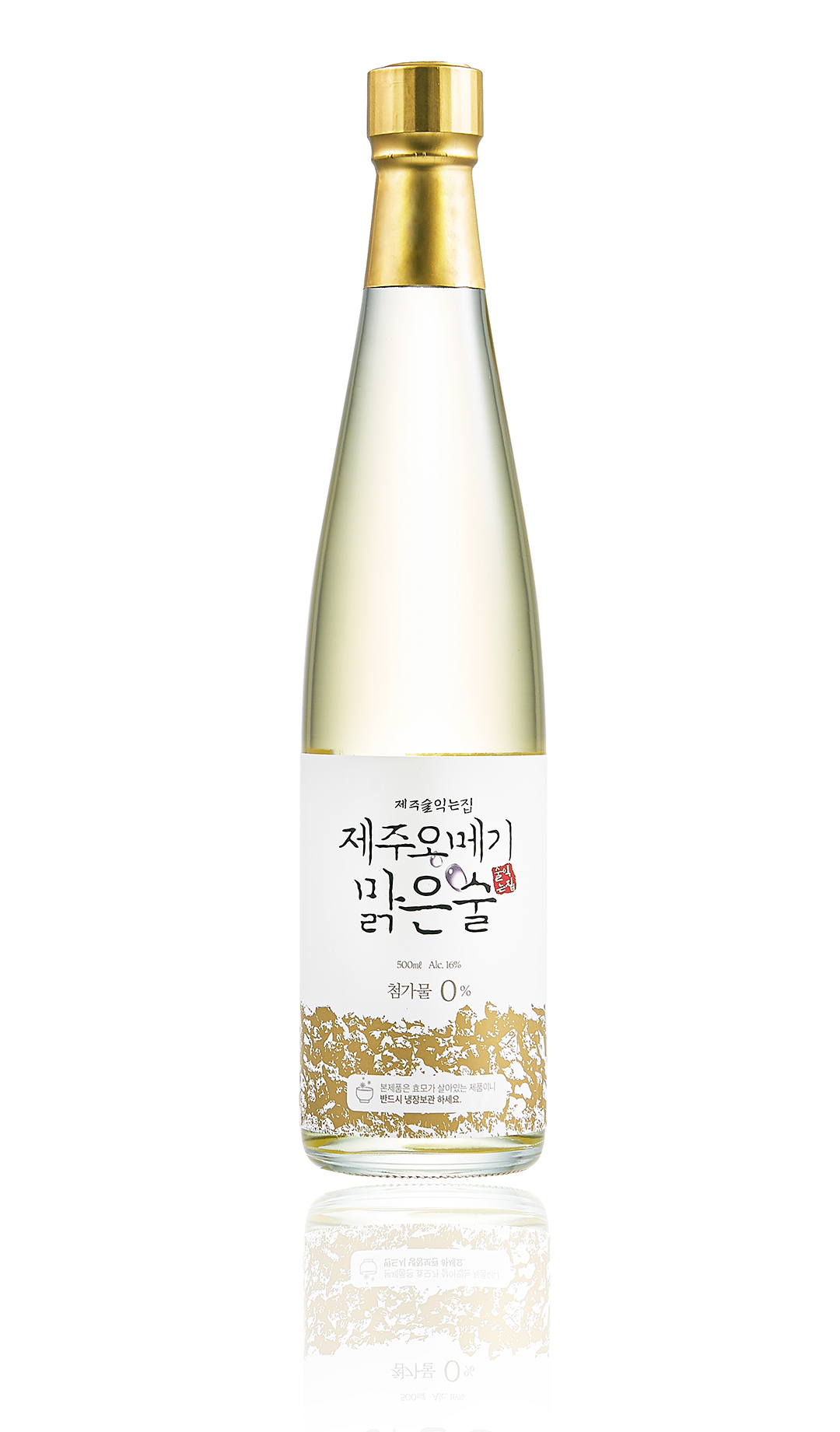 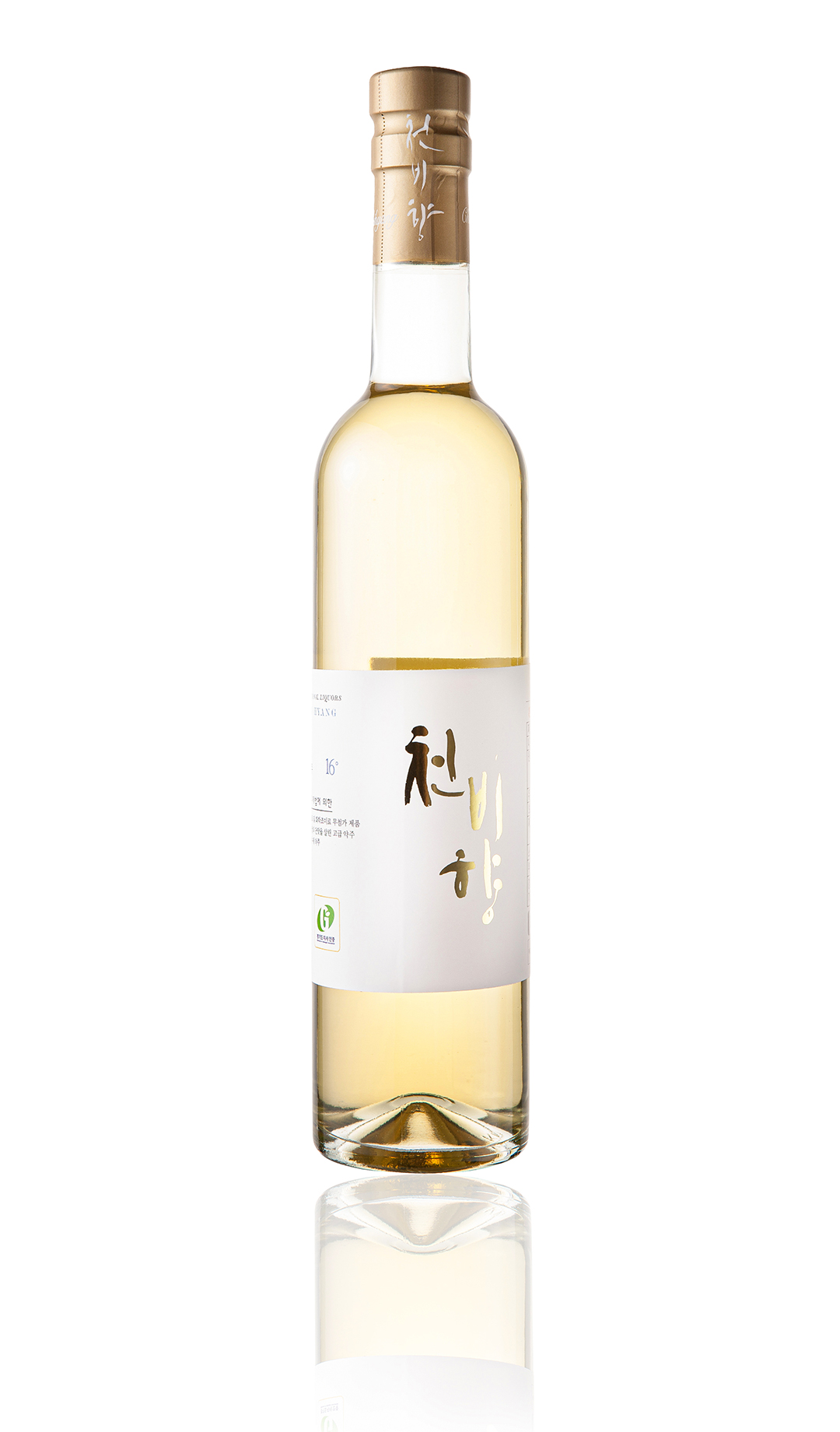 Omegi Clear Drink
It’s hard to go wrong with Omegi in this category. It uses grains from Jeju Island, traditional nuruk and clear water from Jeju. Omegi rice cake made of mixed grains is boiled in water, and is then mixed with nuruk before it’s fermented. It’s thick and yet smooth, with the typically sweet taste of grains and fruity flavor. Whereas other drinks had some rich body with sweetish taste, this drink has the right amount of acidity that goes well with the overall body. It’s widely acclaimed among aficionados and neophytes alike.
Jeju Island Brewery www.jejugosorisul.com
Cheonbihyang
Joeunsul, a brewery in Pyeongtaek, Gyeonggi Province, produces ‘Cheonbihyang,’ which translates to ‘fragrance that holds the secret of a thousand years.’ Most breweries make yiyangju (brewed in two stages) and samyangju (done so in three phases), Cheonbihyang is made in five steps and falls into the category of ‘oyangju.’ It takes that much more time and effort to make it. It was served at the official banquet of the Korea-ASEAN Special Summit, and later at a dinner between President Moon Jae-in and leaders of five major political parties hosted at Cheong Wa Dae. It has some sweetness, acidity and fruity flavor, and goes down easy.
Joeunsul www.instagram.com/cheonbihyang

Sleek packaging and design are appealing to the younger generation, and these alcoholic drinks come in many different flavors, using a whole variety of ingredients. 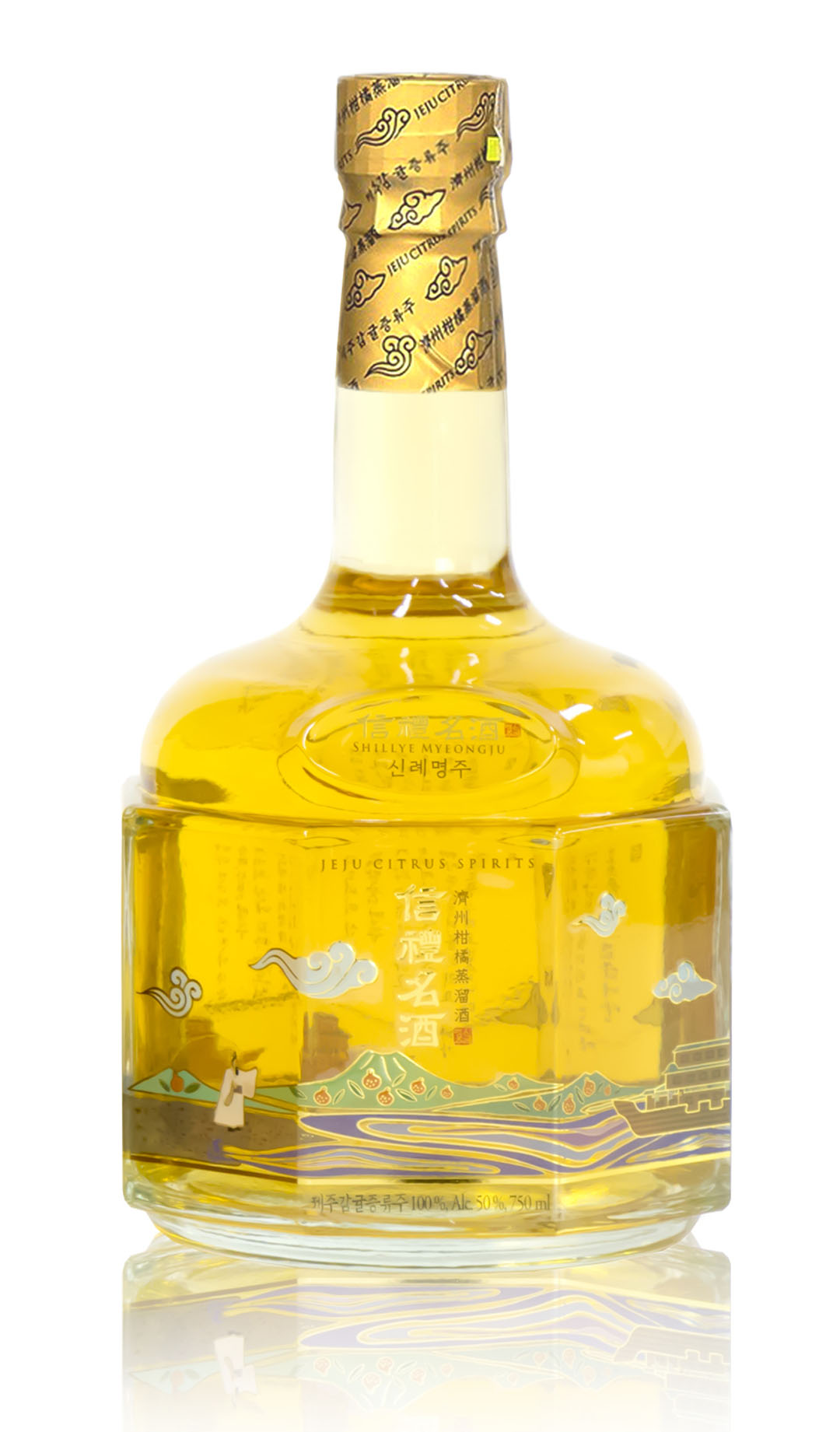 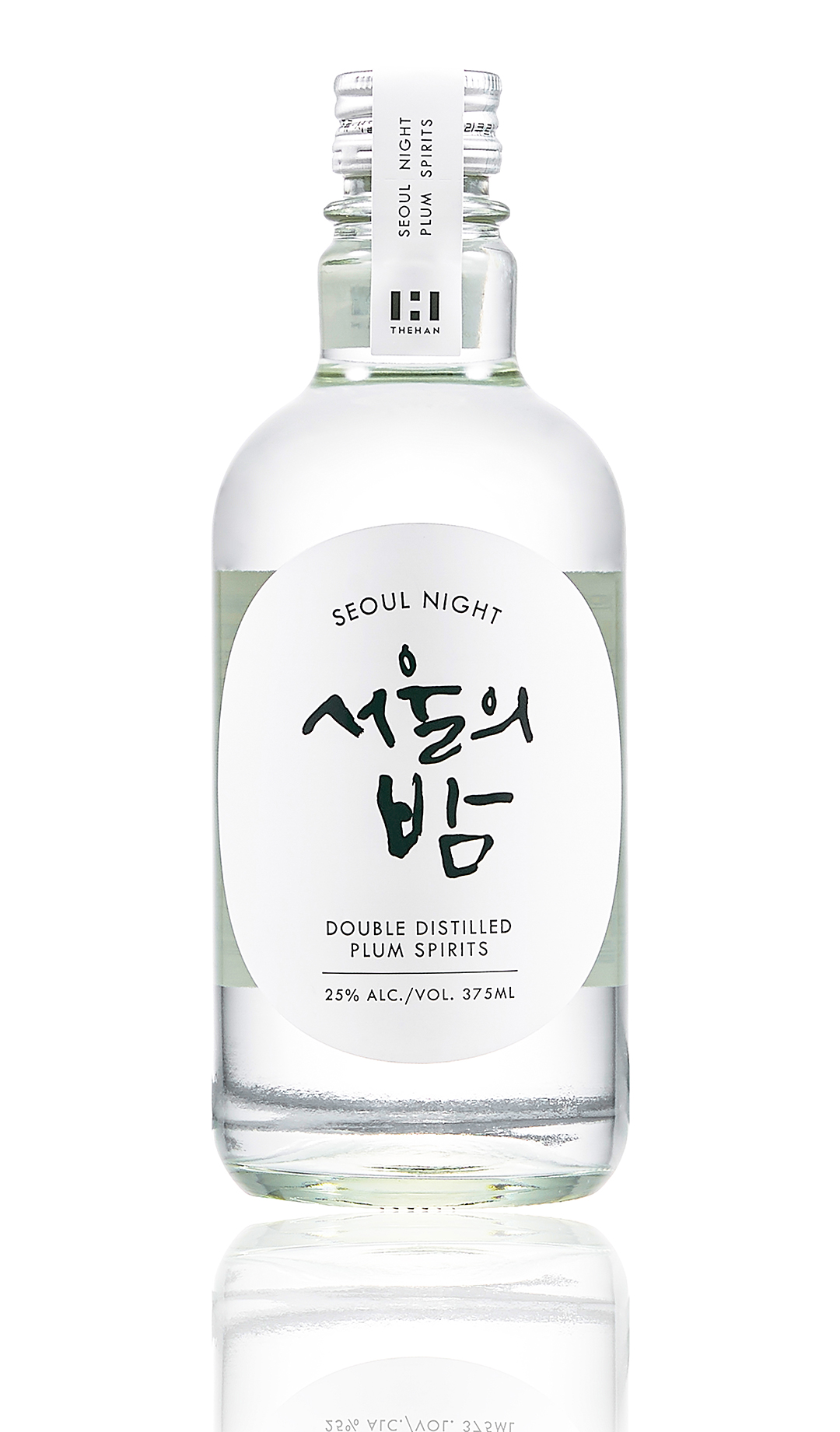 Shillye Myeongju
This ‘unicorn tangerine brandy’ went viral in social media, and after chef Baek Jong-won paid the brewery a visit on SBS series “Delicious Rendezvous,” you couldn’t get hands on a bottle of this if you tried. Produced by ‘Citrus Agricultural Co.’ in Jeju, Shillye Myeongju is a tangerine-distilled beverage with 50 percent ABV. Tangerines produced by members of the regional cooperative are peeled and squeezed by hands. Then it’s fermented at a low temperature using the patented yeast developed by Citrus Research Station. Once it’s distilled, it’s blended with undiluted solution matured inside Limousin oak barrel. Once you get the first delicious taste of tangerine, you’ll never be able to stop.
Citrus www.ehondiju.com
Seoul Night
Seoul Night came out on top on the list of the favorite Korean liquors of 2019, compiled by ‘Daedongyeojudo,’ which provides news and information on Korean liquors, in conjunction with the council of traditional liquor retailers. Plum wine is distilled first, and then to neutralize dryness of plum, juniper berries, which are used for gin, are added for second distillation. Known for its clean and rich fruity flavor, this double distilled plum liquor is also beloved for the design of its bottle.
The Han www.thehan.kr

These fermented wines are made from fruits produced in Korea. 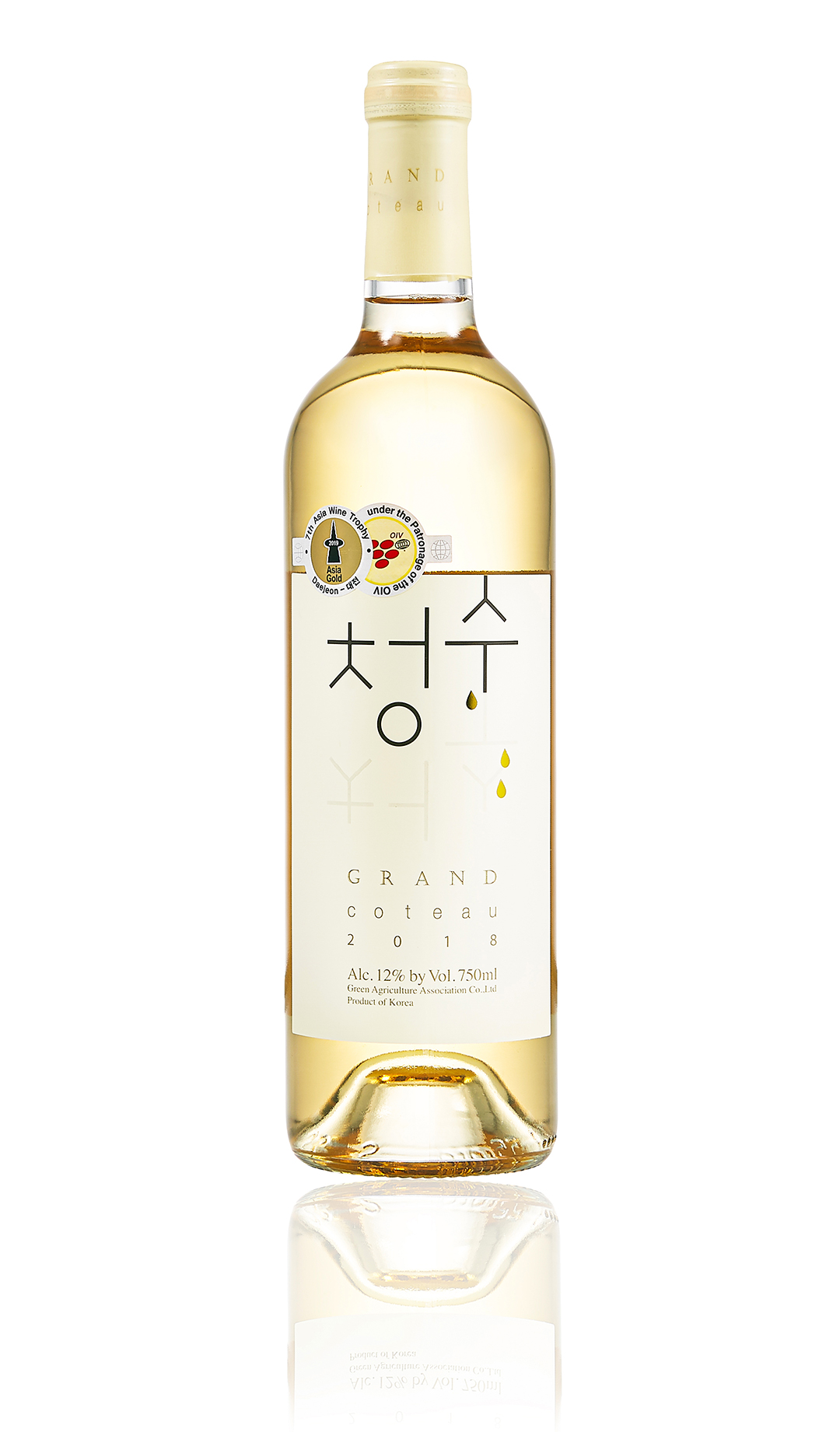 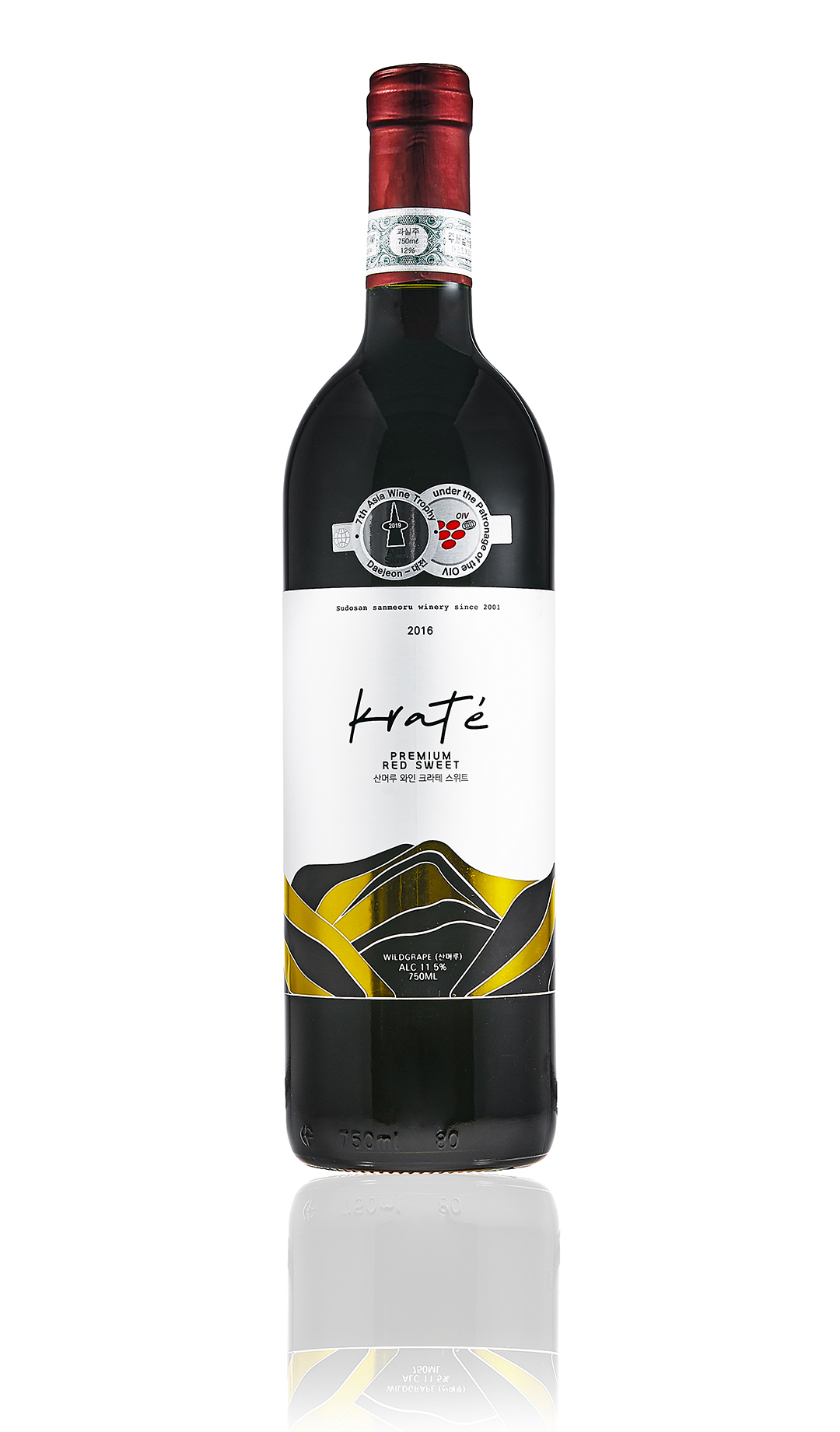 Grand Coteau Cheongsu
This wine is made from ‘cheongsu,’ a type of grapes harvested on Daebudo in the Yellow Sea. Cheongsu is the white grapes developed in 1993 by Rural Development Administration. This wine brings you rich aroma of the grapes, plus refreshing taste, acidity, and fragrance of freshly cut grass. It’s been hailed by numerous sommeliers, and won three straight gold prize from 2015 at the ‘Asia Wine Trophy,’ the largest wine fair in the continent. If you’re searching for a Korean wine to serve foreign guests, look no further.
Grand Coteau www.grandcoteau.co.kr
Krater Semi Sweet
This wine is made from sanmerou grapes picked from about 500m up Sudosan in Gimcheon, North Gyeongsang Province. The name ‘Krater’ is a compound word of ‘Korea’ and ‘crater’ from this region. Sanmerou is about a third of the size of a typical grape, and the nutritious fruit has strong sweet and sour tastes. At the winery, sanmerou fruits are left until they get all wrinkled, and then picked when they’re at their sweetest and ripest. The wine brings a mix of the fragrance and taste of a black berry, balance and acidity.
Sudosan Winery www.sdsmeru.com