Seattle Coffee Scene Becomes Young Again
There is a rock band from the State of Washington called Death Cab for Cutie. The band is well known for their alternative style mixing piano with the conventional set of instruments used in rock music, such as guitar, bass, keyboards, and drums, creating a sound much more delicate and multi-layered. The coffee scene in Seattle has its roots firmly planted in local tradition, but over the years it also became more sophisticated and mature—just like the rock band.
Think about the late 1990s. At the time when it was hard to find more than three types of coffee at a café, this one revolutionary coffee brand opened the eyes of people to a whole new café experience. For the first time people learned what espresso was and craved sweet café mocha sold at the franchise shop. Which brand is it? Some would think of Starbucks, some Seattle Espresso, while others would remember names like Seattle Best or Tully’s. These specialty coffee places all share the same birthplace—Seattle. 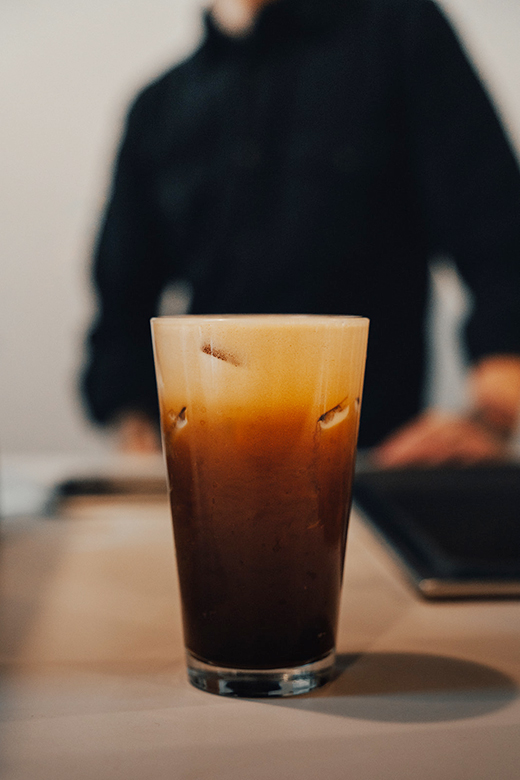 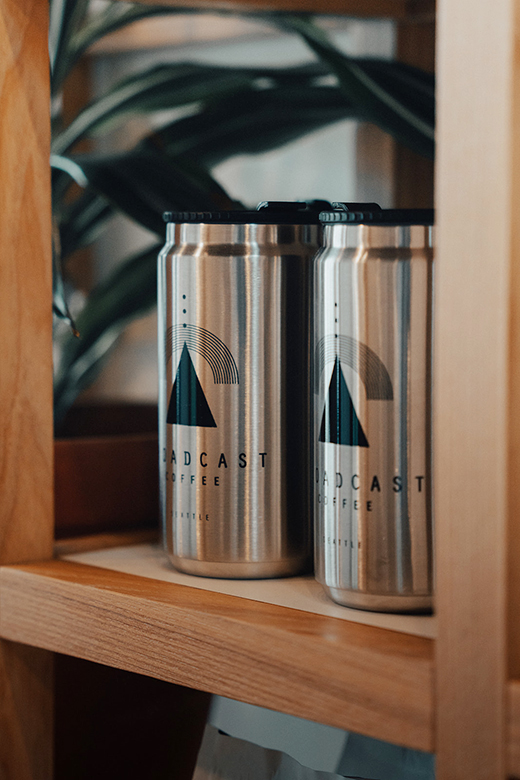 Unique Coffee Culture of Seattle
With that said, you don’t necessarily have to rely on Starbucks to figure out why you associate Seattle with coffee. Then, another question arises. Why is Seattle famous for coffee? Is there a unique coffee culture in the city? To find out the answers, we started our own investigation of sorts.
First, ask local baristas for help. An answer by Timothy Graham, sales manager at ‘Broadcast Coffee,’ hits home in a sentimental way. “The rainy winter of Seattle makes hot coffee even more tasty.” ‘Broadcast Coffee’ is one of Seattle’s roaster brands.
Joshua Boyt, who works as a sales director at ‘Victrola Coffee,’ once said in an interview with CNN, “Coffee is our liquid sunshine in Seattle.” Victrola Coffee has been in business for 20 years and holds free ‘Coffee Cupping’ every weekend. It is a small, almost ritualistic public class teaching how to properly brew coffee and introducing new blends.
An article in Seattle’s local magazine backs the ‘weather theory.’ It goes like this. Between the 1950s and 1970s, a unique Bohemian culture was formed in Seattle. Those who believe the ‘weather theory’ argue that this culture, combined with the city’s rainy weather and a growing demand for meeting venues, led to the prosperity of coffee shops. In the following 1980s, what’s known as ‘counter-culture,’ derived from the Bohemian spirits, sweeped the city. People turned their backs to conglomerates and instead deemed it virtuous to go to local cafés. The cultural trend soon became a full-on social phenomenon. Finally in the 1990s, the entire world was focused on coffee. 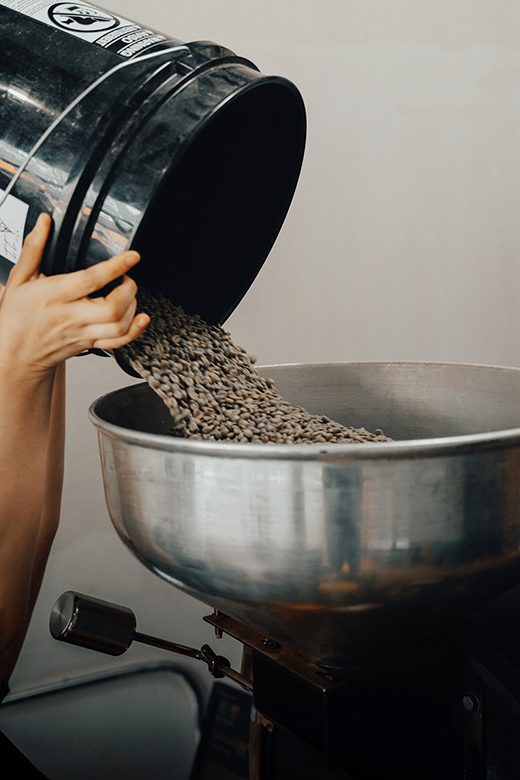 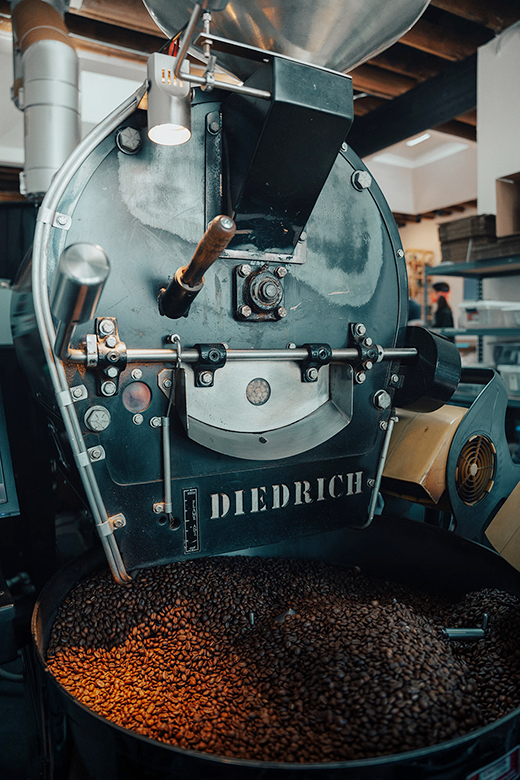 All Coffee Leads to Seattle
“Being a port city, Seattle gets about 120 million pounds (translating to 54 million kilograms) of green coffee beans every year.” What Jake Paulson, co-founder of ‘Anchorhead Coffee,’ says adds a geological factor to our question. When Paulson felt his energy was up for a life of traveling around the world as an audio engineer working with rock bands, he joked about changing careers with Mike Steiner who was his schoolmate and working in the same field. In 2013, they opened ‘Anchorhead Coffee’ with a focus on specialty roasting. The brand name hints at their home town Seattle and its maritime culture.
Belonging to a senior millennial generation, Paulson and Steiner positioned their brand at a crossroad between Seattle’s traditional coffee scene that was still active and a modern café culture that was up and coming. It was a bit unexpected that they picked a rather dark tone for the shop interior and product packaging. Looking closely, however, you will see the rookie entrepreneurs’ refreshing wit. Through the odd, yet intriguing design choice, they successfully built a unique business identity. Paulson adds, “Roasters and cafés from various eras coexist in a city. Seattle’s coffee culture is extremely diverse and still growing.” 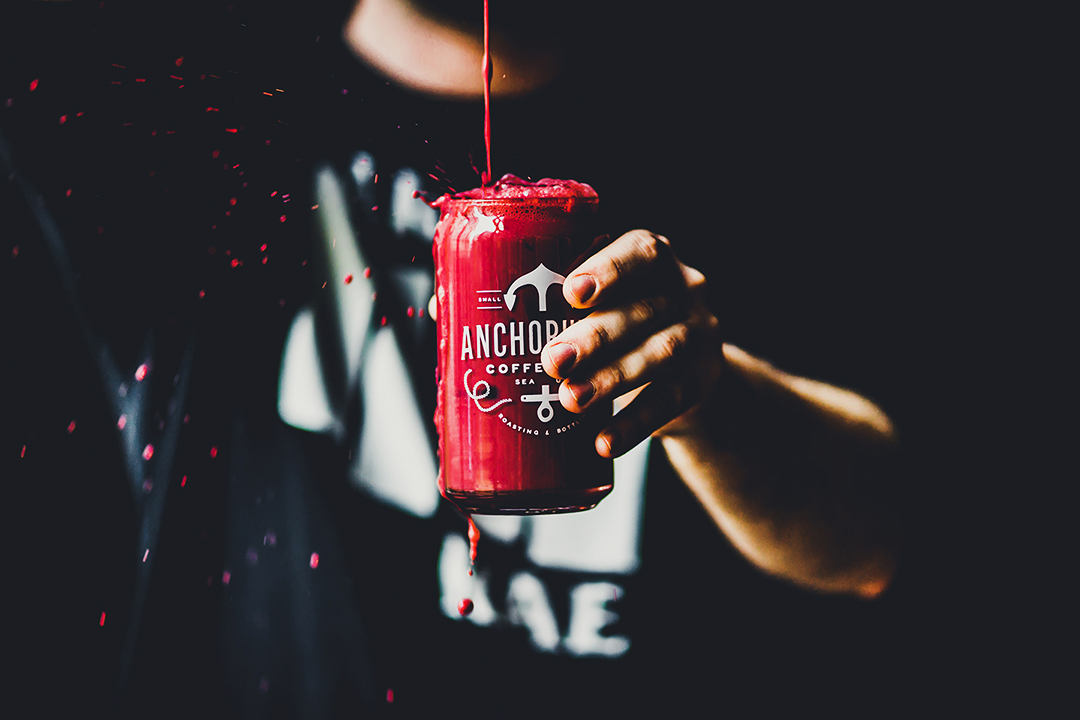 If roasters emphasized the traditional flavor of coffee during the first coffee wave in Seattle and continued to head in that direction for advancement, young roasters including Anchorhead Coffee now focus on providing a more balanced roast that will accentuate the original flavor of coffee beans. The two founders of Anchorhead Coffee who are considered star roasters by the media attribute their success to the quality of roasted beans, shop design, and a unique café culture. They currently operate three offline shops in Downtown Seattle, Bellevue, and a relatively quiet Issaquah area. Their next café opening is in Pike Place Market. Along with its specialty drinks, Anchorhead Coffee is famous for homemade ‘Quaffle.’ It’s a one-of-a-kind pastry that combines a cinnamon roll, waffle, and croissant.

21st Century Coffee Scene, Beginning of Its Transformation
Jake Paulson recommends ‘Olympia Coffee’ among local roasters. Olympia Coffee Roasting Co. is a brand with an offline presence at Amazon’s Seattle Headquarters but its beginning in 2005 was at a small warehouse in Olympia, an hour-drive from Seattle. To briefly look back, there was a time when the coffee culture in the Pacific Northwest came to a lull, compared to other regions. You will see it more clearly if you think about how energetic the coffee scenes were in San Francisco, Los Angeles, and Melbourne in the beginning of the 21st century. Sam Schroeder and Oliver Stormshak bought the coffee brand as they saw a potential to shake up the stagnant coffee industry of the Pacific Northwest and bring in the 21st century business model. They found a solution in direct commerce with coffee farms. A reliable partnership with a premium-quality bean producer also enabled them to fine-tune the flavor of coffee.
From selecting the green beans to roasting, tasting, and brewing, their attitude toward coffee is not that different from that of a master artisan creating a handmade craft. In fact, they have received awards in the U.S. Brewer’s Cup and the Northwest Brewers Cup as well as many other contests. You can check out the Olympia café located in West Seattle if you are curious about their coffee. 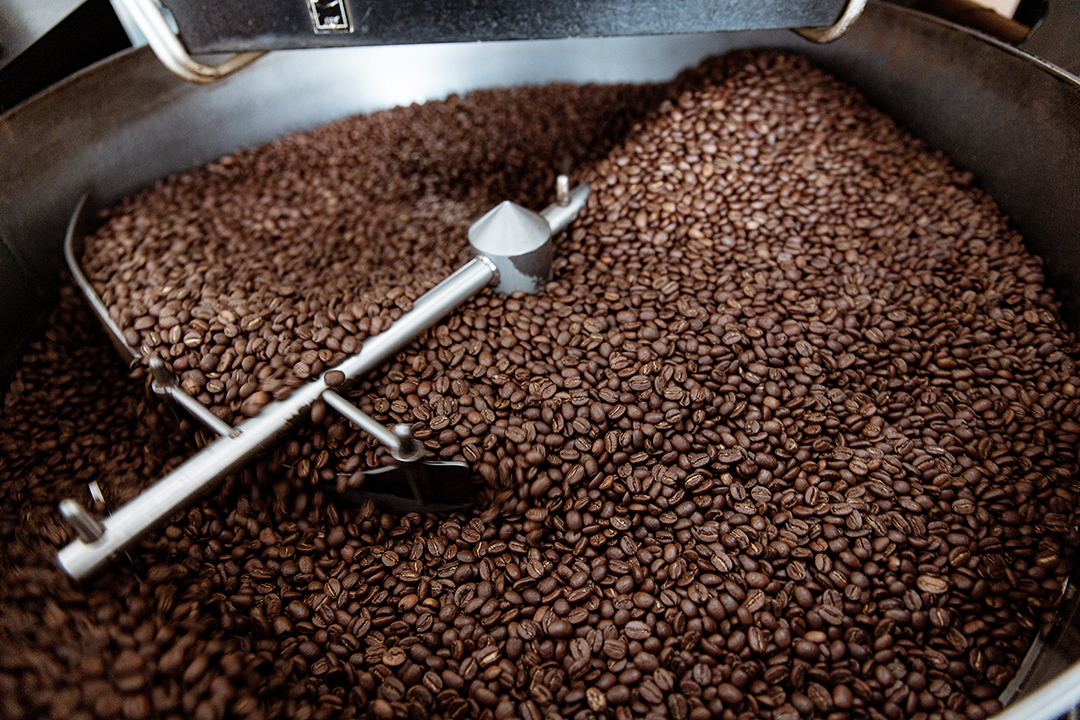 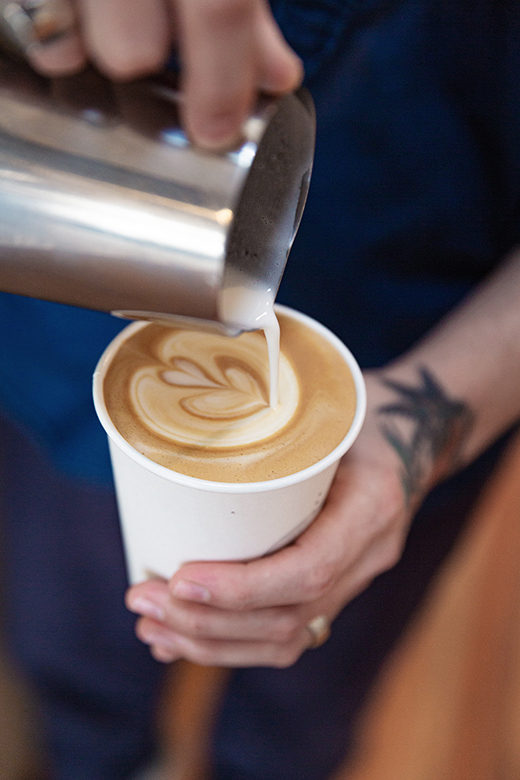 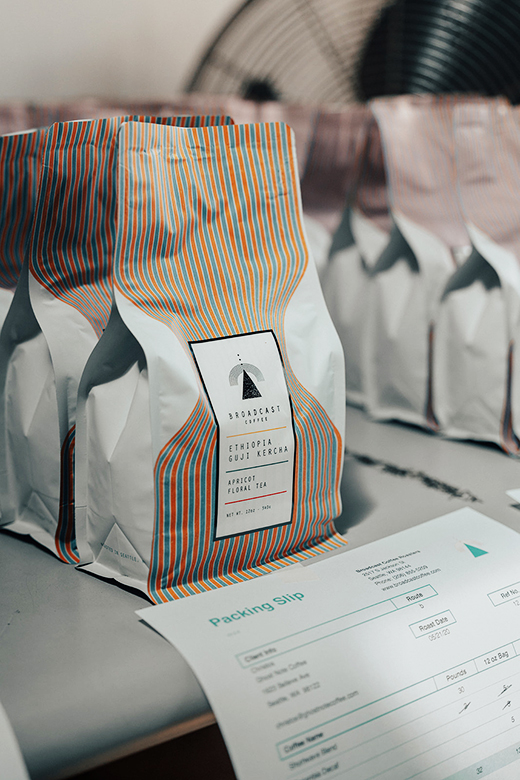 What’s Special About Specialty Coffee
Now is a good time to talk about ‘specialty coffee.’ The term is used for the highest-grade coffee with a unique flavor that is reflective of the origin’s external factors such as climate and geography. By definition, specialty coffee is coffee scoring 80 points or above at a strict evaluation by the Specialty Coffee Association of America. If the first generation of coffee was instant coffee, and the second franchise coffee, the third will be specialty coffee. The latest trend is known as the third wave and leading the coffee culture of younger consumers.
Let’s go back to the specialty coffee roaster ‘Broadcast Coffee’ in Seattle. The brand was named by founder Barry Faught who wanted to honor his father’s lifelong career as a radio host. Founded in 2008, the roaster provides beans to ‘Ghost Note Coffee,’ a popular café in Capitol Hill. There also are three branches in business across Seattle. The roasting company maintains serious and passionate attitudes toward coffee, but pursues a modern interior style and fun product packaging.
If there is a noticeable trend with coffee shops to sell fresh, homemade snacks, Broadcast Coffee is at its forefront. The two locations in the Central District where family and student customers frequent are, to be precise. The Jackson branch took the first step, followed by the Yesler shop. They recently redesigned the kitchen and hired a chef to handle snack orders. Of course coffee is the most important in all this. The most popular drink is an espresso called ‘Crossfade,’ using a combination of the highest-grade Columbian beans and Ethiopian beans. The addition of perfectly-steamed milk on top completes the cup of coffee. Other popular choices are ‘Cold Brew’ which tastes like chocolate thanks to the use of a special blend named ‘Breaker One Nine’ and ‘Disco Pony’ which mixes sparkling water with espresso and adds cream, vanilla syrup, and surprisingly lemon juice. 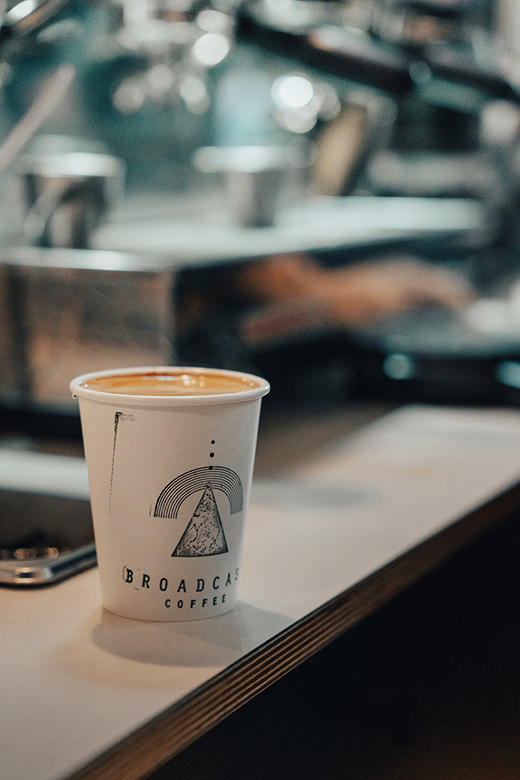 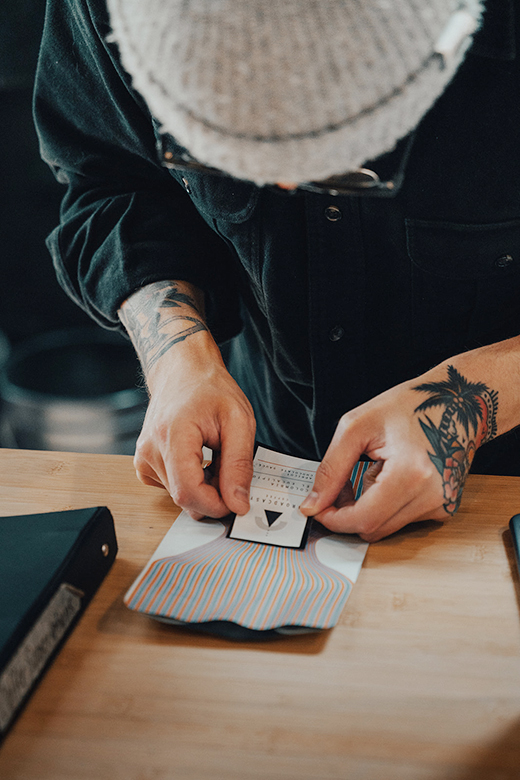 Fresh Perspective and New Coffee
Inevitably we sampled Seattle coffee for our investigation. First, we ordered the ‘Peru La Tierra’ blend from the Broadcast Coffee homepage. The description said the medium roast had plum and pecan pie notes. To select a grinding level, we were offered multiple options including drip, espresso, V60, chemex, and aeropress. At that point, it’s already a brand-new coffee experience. The package arrived with a note written by a café staff in charge of the product. It’s a personal touch you can’t expect from a big coffee franchise. The hand-dripped liquid was strong and clear brown. A fruity scent enwrapped us subtly. The flavor was inspiring. The heavy body of coffee balanced well with the multi-layered fruit scent. Time passed and we felt refreshed. Then we remembered finally what it was like to have a fine cup of coffee. The flavor wasn’t everything. Timothy Graham of Broadcast Coffee was right. Trying a new blend of coffee gives you a fresh, new perspective.

Epilogue
Other than the cafés listed above, local baristas recommended: ‘La Marzocco’ owned by espresso machine maker of the same name and located in public radio station KEXP which regularly airs alternative and indie rock music: ‘Analog’ a typical corner coffee shop that introduced cold-brew tab for the first time in Seattle and was featured on and : and ‘Elm Coffee Roasters’ situated in the city’s trendy Pioneer Square.