Sokcho’s Buckwheat Noodles, Keeping You Cool in Summer
There are many different things you can eat on hot days. Few will keep you cool in the summer quite like dongchimi buckwheat noodles of Gangwon Province, complete with thin sheets of ice on top. We will take you through the province, from Yangyang to Sokcho and all the way to Goseong.
The etymology for the Korean word for buckwheat, ‘memil,’ has its roots in the letter for ‘mountain.’ And yes, buckwheat does grow in the mountainous regions. In Korea, Gangwon Province is the major producer, while Nepal, Bhutan and Japan’s Hokkaido are also famous for buckwheat. Because it was easy to gather buckwheat in barren mountains, buckwheat used to be considered as something that could feed people during spring poverty. But it didn’t give you any filling sensation, and thus wasn’t really a popular ingredient. Perhaps that explains the dearth of historical records for buckwheat in Korea. Carbonized buckwheat was discovered in Baekje relics, but in historical documents, the first reference to buckwheat was made in the 13th century, the late Goryeo period. It’s still not yet clear exactly when people started making food with buckwheat. All we know is people in Gangwon have been making noodles with buckwheat and eating them with different types of broth for a long time. Because regions within the province are divided up by mountains, different places in Gangwon serve different broths for their buckwheat noodles. In the western part of the province, such as Namchuncheon, pork broth is the standard. On the east, dongchimi (radish kimchi) broth is used. And within that eastern region, Goseong and Sokcho in the north use clean dongchimi broth, while Jumunjin mixes dongchimi broth with some soy sauce. In Pyeongchang, a bit south, drops in fruits. Not every buckwheat noodle is the same in Gangwon Province.

It used to be that not being greasy or oily was seen as a downside to buckwheat. But in this era of hypernutrition, buckwheat is being reconsidered. “Donguibogam” states that buckwheat helps keep the body cool and dry while stimulating. Its flavonoids also stimulate reproduction of interstitial cells and help you overcome fatigue and exhaustion during summer. This is the healthy ingredient that’s perfect for the 21st century, something that keeps you healthy and energized in the summer heat. 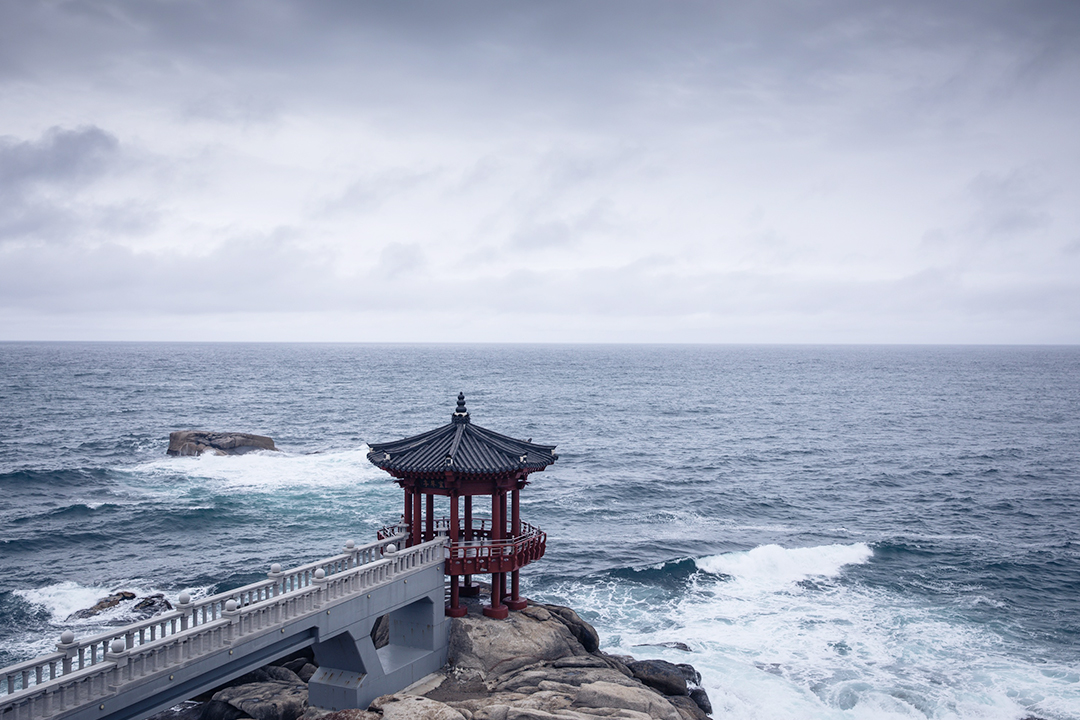 The opening of Seoul-Yangyang Expressway has made Sokcho even more popular as a summer destination. And Sokcho has so much to offer: the sounds of the crashing waves at Yeonggeumjeong, the breathtaking view of Ulsan Rock at Mt. Seorak, the sparkling Yeongnang Lake and Cheongcho lakes, North Korean food in Abai Village, and raw squid mixed with vegetables. A cold bowl of buckwheat noodle will trump them all and will keep you nice and cool this summer. 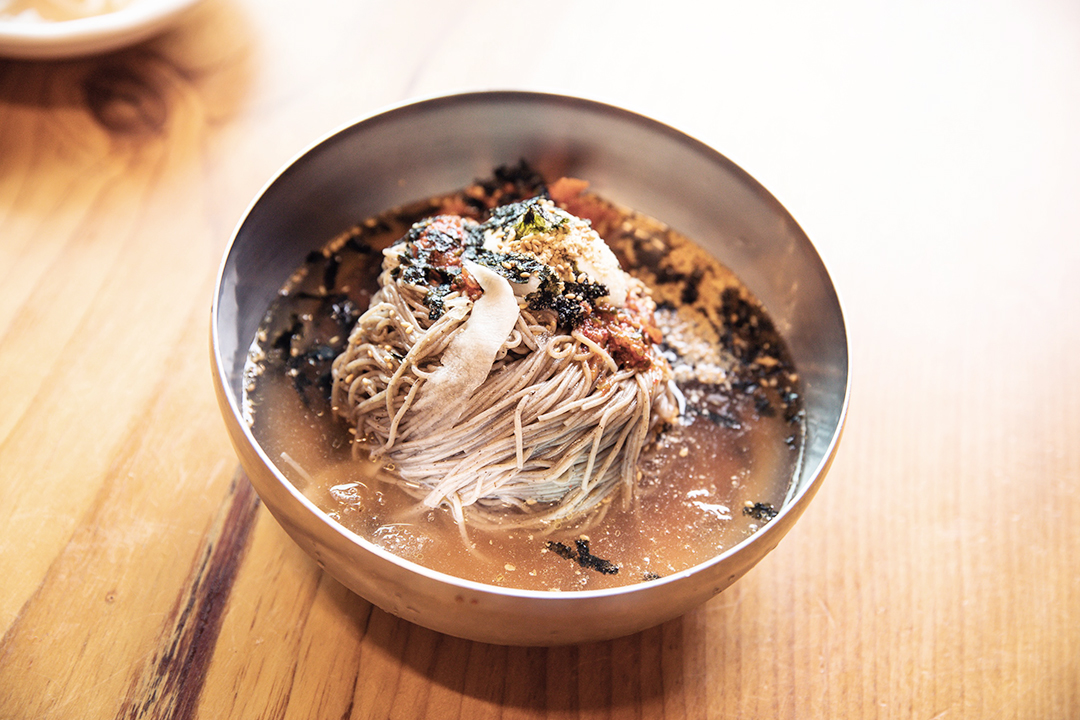 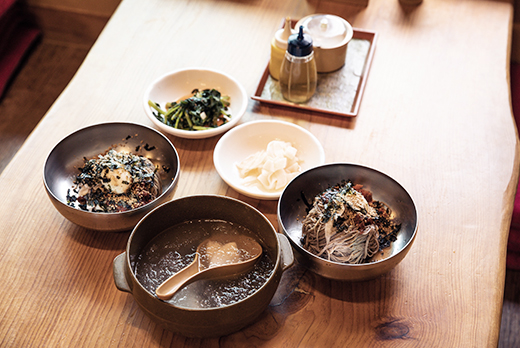 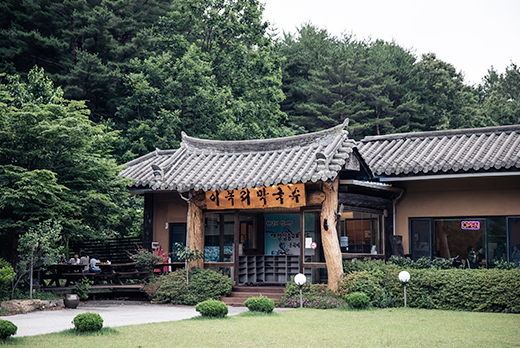 Imokri Makguksu
Imokri in Sokcho translates to ‘a village of pear trees,’ though it’s a modest country village defined more by its tranquility than by pear blossoms fluttering in the wind. The view of the magnificent Ulsan Rock adds something extra to the visit to this village. In terms of its size and the sheer number of people it serves, Imokri Makguksu may be the most popular buckwheat noodle place in Sokcho. On weekends, even its third parking lot gets filled up. Large groups of people even charter a bus just to visit Imokri Makguksu. The sauce falls on a sweet side, but dongchimi isn’t. It just has that perfectly clean taste. You can choose dongchimi or myeongtae (pollack) makguksu, though the only difference is pieces of the fish on top. With myeongtae noodle, you just add a scoop of dongchimi broth. For dongchimi makguksu, you can add more of the broth. You can order raw myeongtae for extra 2,000 won, so we commend you enjoy the clean taste of dongchimi makguksu and then have the sweet and sour fish separately. Boiled pork is also quite delicious when wrapped in kelp. During the COVID-19 pandemic, restaurants in Sokcho have been closing down early. Imokri Makguksu stays open until 8:30 p.m., which is fairly late in this area. Given the taste of food, the size of the restaurant, pretty interior, a diverse menu and opening hours, this place will stick around a long time. 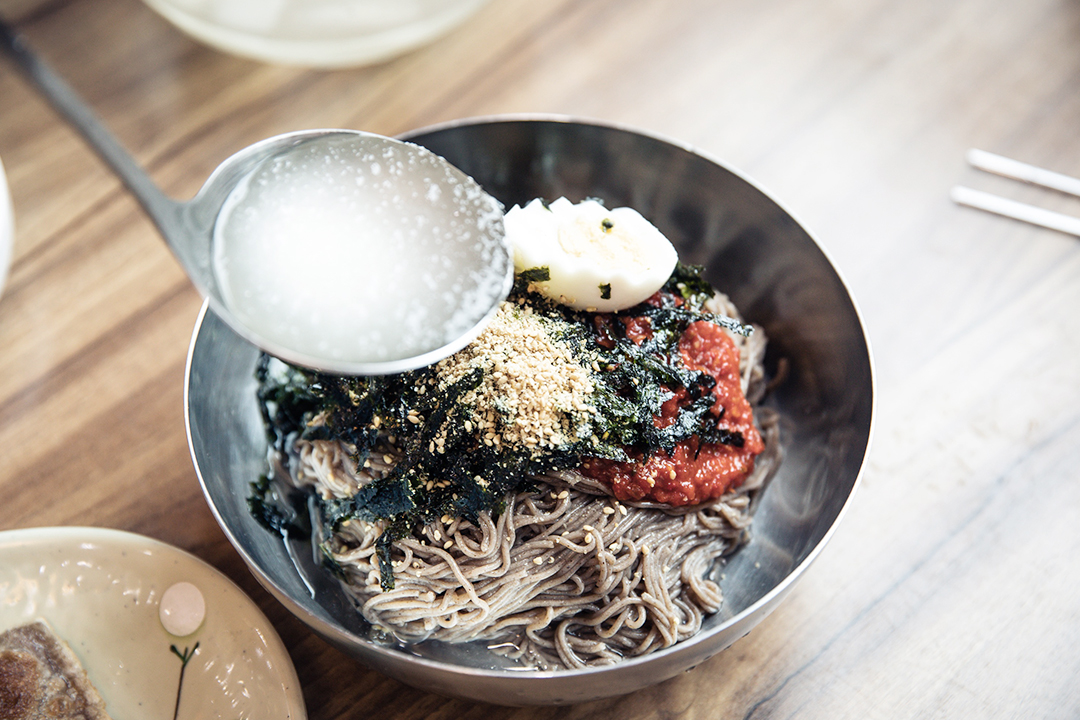 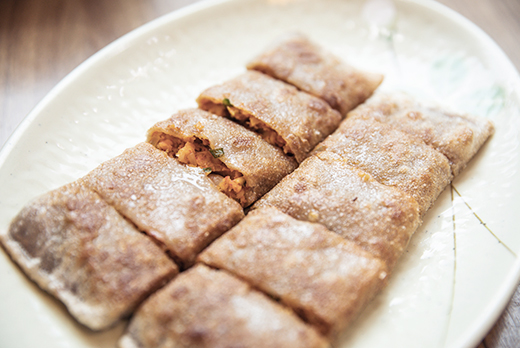 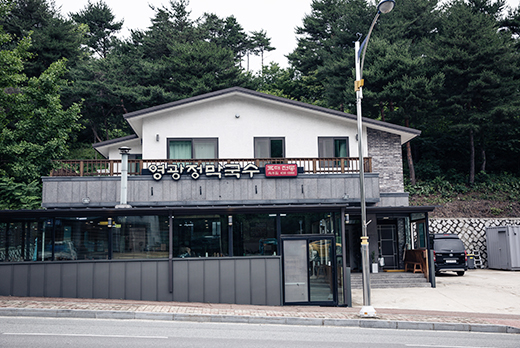 Yeonggwangjeong Memil Guksu
They have the main location in Yangyang and a branch in Sokcho. The Yangyang restaurant isn’t that huge, but it serves a wide variety of delicious dishes. It earned two ribbons in the Blue Ribbon Survey, and earned high praise in the TV show. In 1974, a lady from Hamhung, North Korea, and her daughter-in-law opened the restaurant to serve North Korean-style buckwheat noodle, and it has been handed down to the third-generation grandson of the family. Mix some ground onion into dongchimi broth and add some sauce that has a little bit of bite. You can also add laver or sesame seed on top. But if you want to taste dongchimi broth at its natural, you can ask to have your bowl without them when you order. The chewy and soft boiled pork is great, but bossam kimchi and raw myeongtae that come with it are even better. Myeongtae is a bit sweet and as soft as silk. Gamjajeon (potato pancake) is at once crispy and chewy. Memil jeonbyeong (buckwheat crepe), dumplings and tofu are beyond reproach. You can order extra serving of noodle, but ask for a big portion when you order and you’ll get plenty. 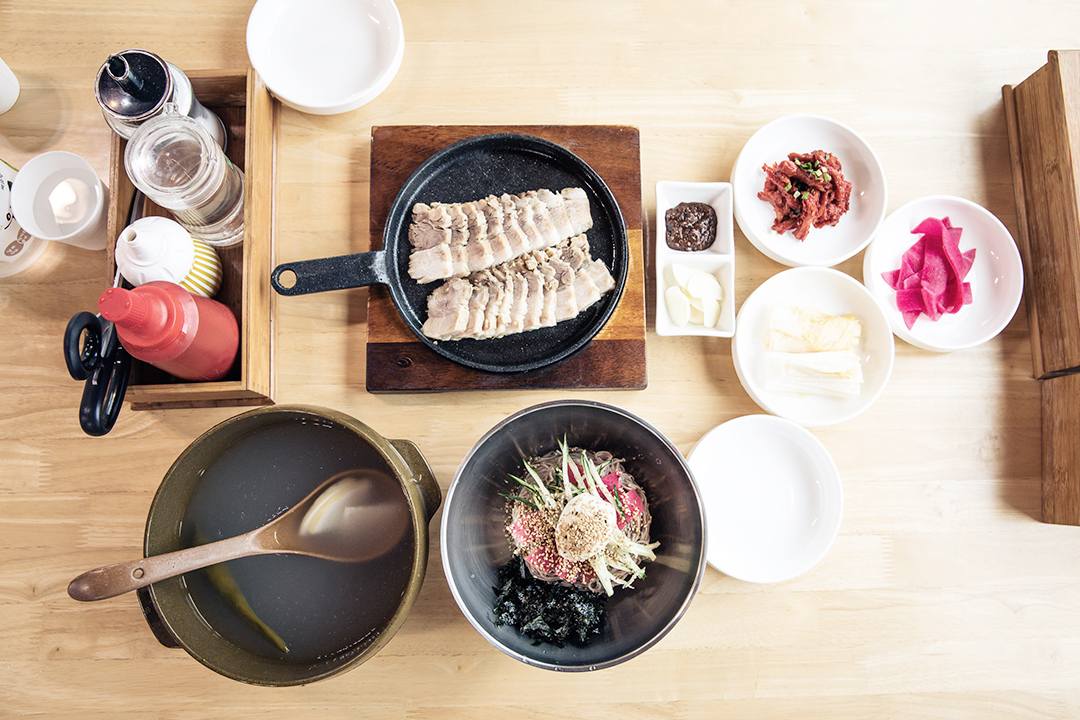 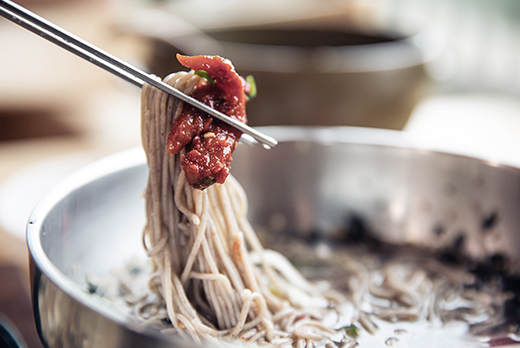 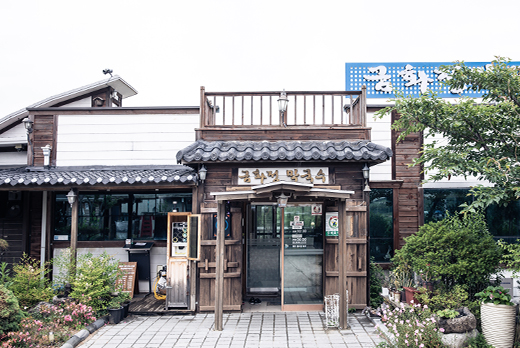 Geumhwajeong Makguksu
It’s definitely worth a 20-minute drive from Sokcho to taste that dongchimi broth at Geumhwajeong Makguksu. It’s been around for about 10 years, making it the newest noodle place in Yangyang, Sokcho and Goseong regions. But the owner of Geumhwajeong Makguksu, now 60 years old, was born and raised in the neighborhood, and has vivid memories of town parties where buckwheat noodles were served. He remembers the taste of the indigenous buckwheat noodle and dongchimi better than anybody. A fermentation room in front of the restaurant, with the temperature set low, helps dongchimi and raw myeongtae maintain that original taste. On the other hand, the restaurant has continued to evolve. Radish kimchi comes colored in beet, and it also tastes great. Boiled meat comes on an iron plate to keep it warm. Noodles at popular restaurants in Sokcho are known to contain about 80 percent buckwheat, though their textures all vary. You can more easily cut the noodle served here. If you like buckwheat noodle at its most natural form, this is the place to eat. Dongchimi makguksu without the spicy sauce has such a clean taste. A bit north to Geumhwajeong is Baekchon Makguksu, the best-known buckwheat noodle place in Goseong. 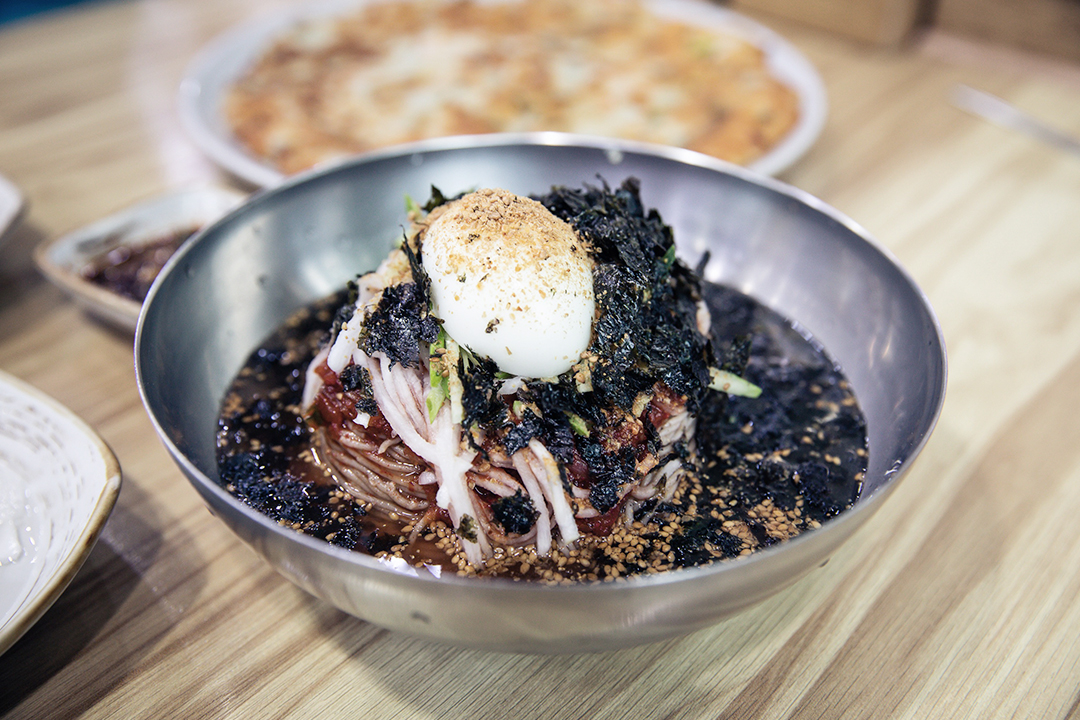 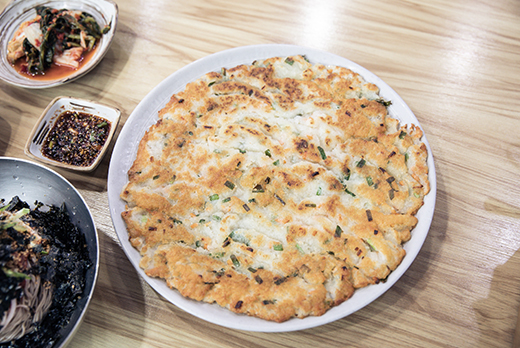 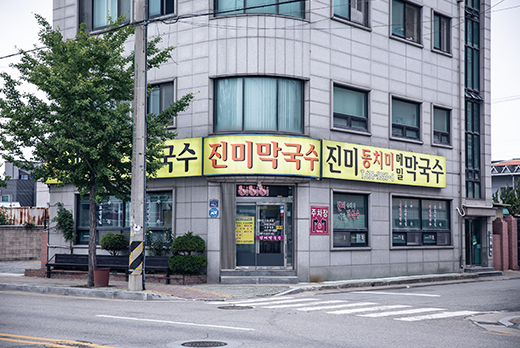 Jinmi Dongchimi Memil Makguksu
It opened in Yangyang in 1992 and relocated to Sokcho in 2004. It sits close to the Expo Park near Cheongcho Lake. Unlike sweet and sour combination in other places, the broth here has a salty edge. With pepper fermented inside dongchimi, the radish is a bit spicy. Overall, the buckwheat noodle here has some bite compared to others in the region. On the other hand, the sauce isn’t that spicy, despite its red color. The noodle will have small black spots, which come from the outer hulls of buckwheat. If you only use the inner part of buckwheat, the noodle will be a bit whiter and softer. The mix of the outer part will make the noodle darker and tougher. Makguksu is supposed to be tough, too. This restaurant sits in the heart of Sokcho, and has the most unique taste. The general saltiness of the buckwheat noodle here, compared to sweet-and-sour types on the east coast, could make this polarizing. But there can’t be any disagreements over the generous portion of potato pancake. A famous dakgangjeong (sweet and crispy fried chicken) place is nearby, and be sure to take pick up some as souvenir. 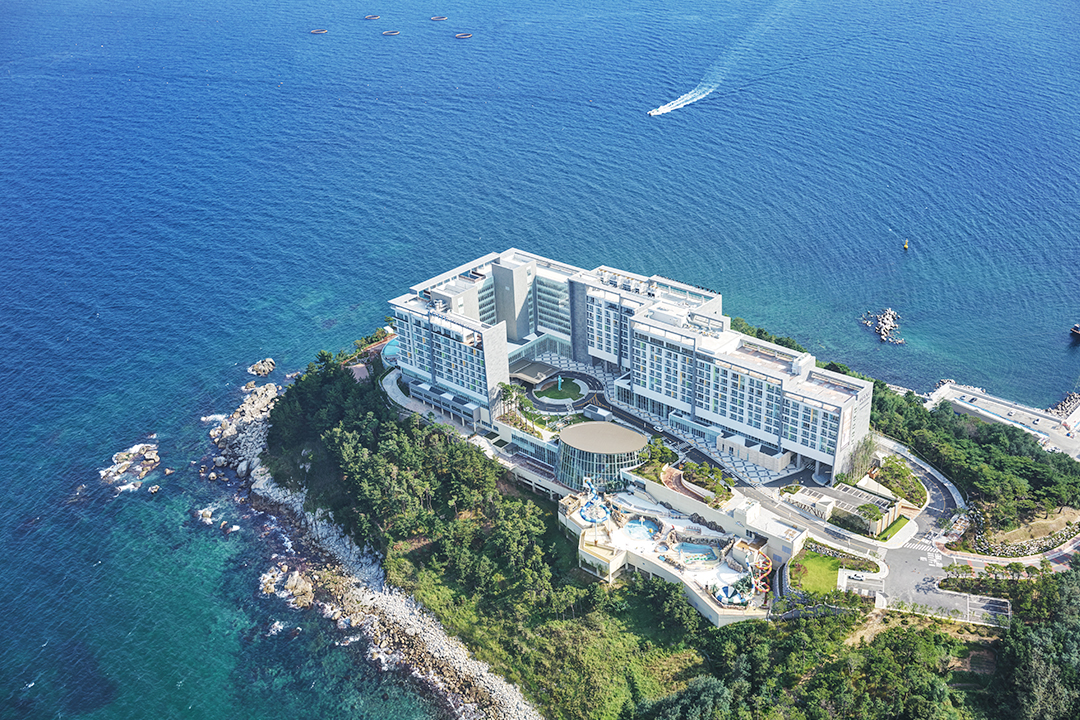 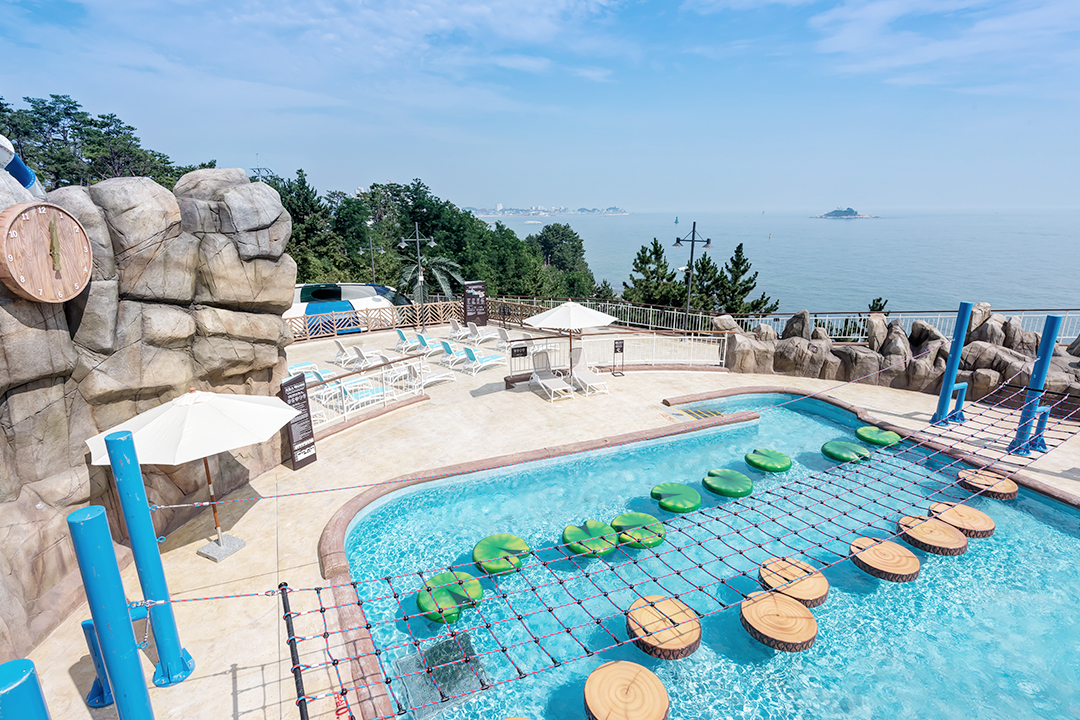 Where to Stay in Sokcho: LOTTE RESORT SOKCHO
LOTTE RESORT SOKCHO stands on Oeongchi Hill, surrounding by the ocean on three sides, and it’s famous for its great view of the seas. Every room offers a view to the ocean, and the state-of-the-art water park is particularly popular among families. Thanks to its proximity to both Yangyang and Goseong, you can go on your makguksu tour from here.