Six Korean Desserts to Win Praise as Chuseok Gift
Exchanging gifts with your friends and families on Chuseok shouldn’t bore you. For those who have experienced the feeling of 1% dissatisfaction while buying a hangwa(Korean traditional sweets and cookies) gift set, we’ve prepared a list of hangwa brands that are known for their unique flavors, shapes, and even wrappings. Six shops are featured for their new ‘Korean-style desserts’ that will satisfy everybody from adults to children. 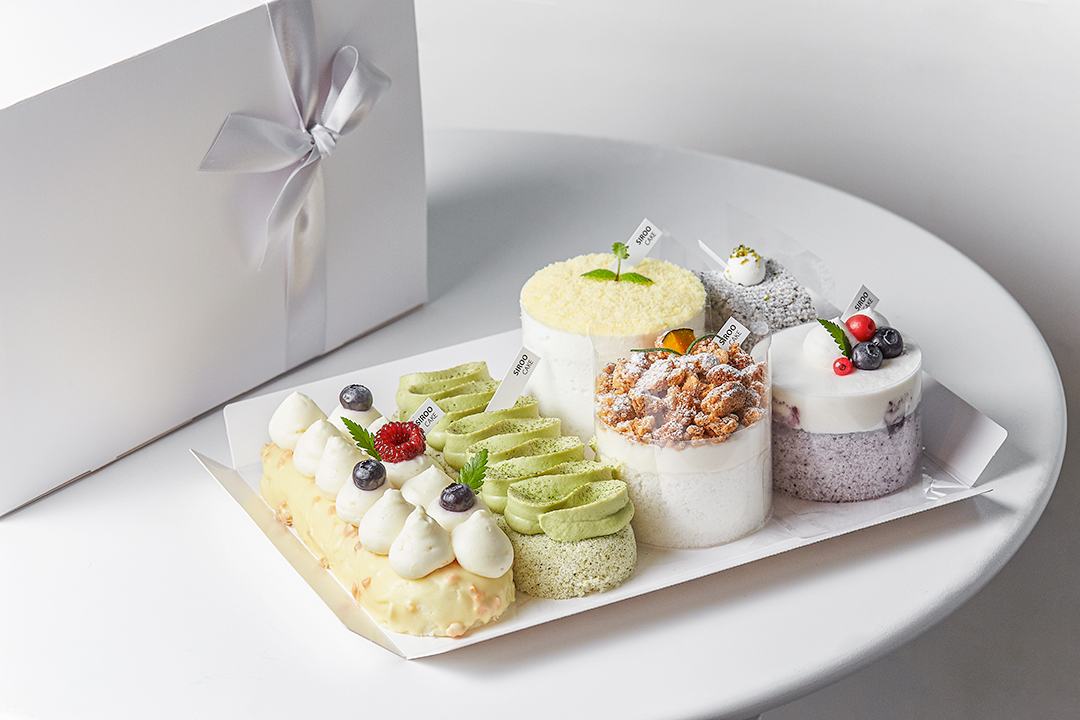 Tteok Cake by ‘Siroo Cake’
It’s a real cake. Tteok Cake by Siroo Cake is just as pretty and delicious as a regular cake sold at a bakery. Cake sheets are made of seolgitteok(steamed rice cake), and for whipped cream, the Siroo Cake owner uses her own recipe, adding ingredients that would complement the cake flavor to whipped cream made 100% of milk. Siroo Cake started business after the owner tried adding baking ingredients such as whipped cream and chocolate to tteok as she wondered how to enhance the flavor of tteok. She was fascinated by the flavors she created and began working on her own recipes for various tteok cakes. 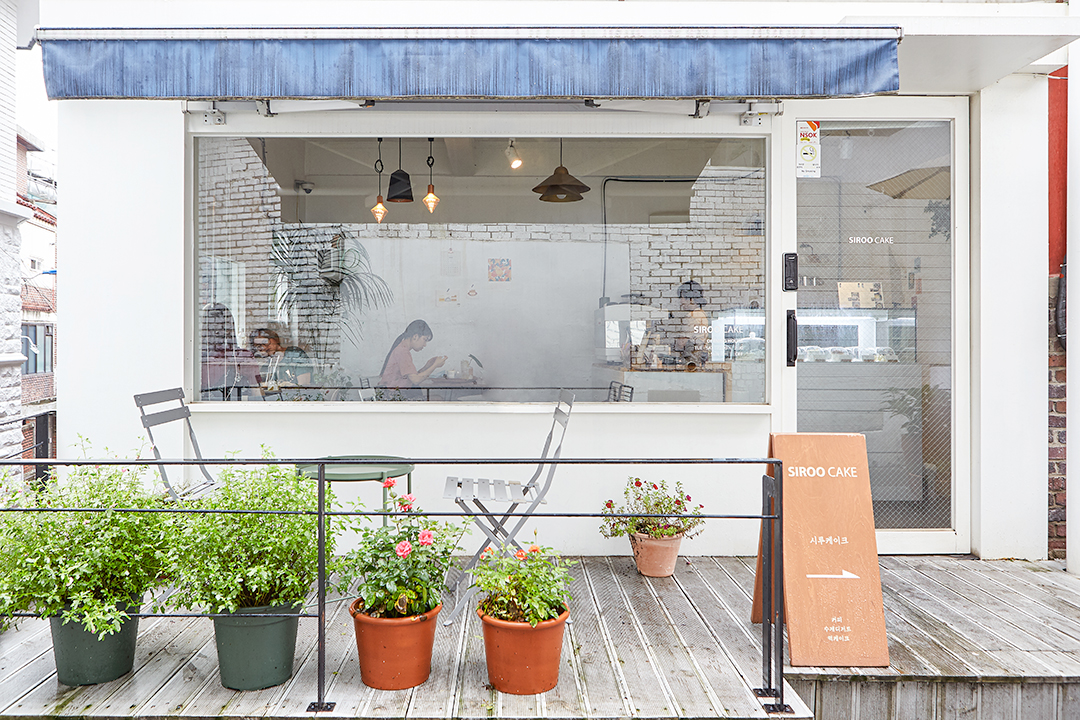 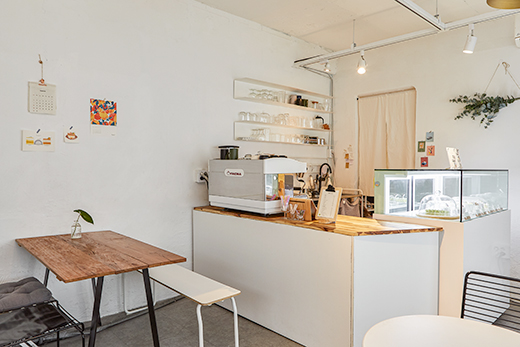 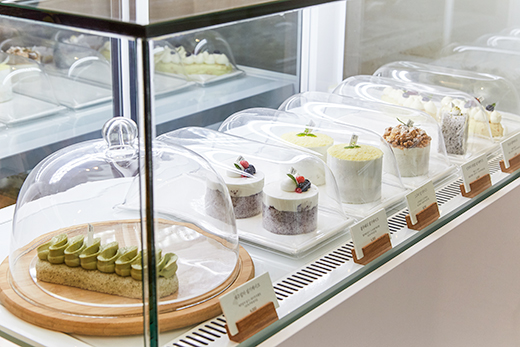 The shop’s signature menu is ‘Black Sesame Roll Tteok Cake.’ It is a roll cake with a hidden surprise as it is hard to know if the cake is made of tteok before the first bite. Its chewy sheet uses sweetened black sesame cream and low-sugar seolgitteok for a soft, melting texture in the mouth. ‘Sweet Pumpkin Crumble Seolgi Cake’ with crunchy crumbles on top and ‘Citron Seolgi Cake’ featuring white chocolate and citron cream are also popular. The intersection between tteok and dessert has successfully attracted customers including young people and even men in their 30s and 40s. Siroo Cake’s menu also appeals to children and senior customers who find tteok cakes less sweet than regular baked cakes. Tteok cakes can all be individually wrapped. A whole cake order should be made in advance.
Address 4 Wausan-ro 1-gil, Mapo-gu, Seoul
Phone +82-10-6214-7700
Homepage blog.naver.com/mintmari 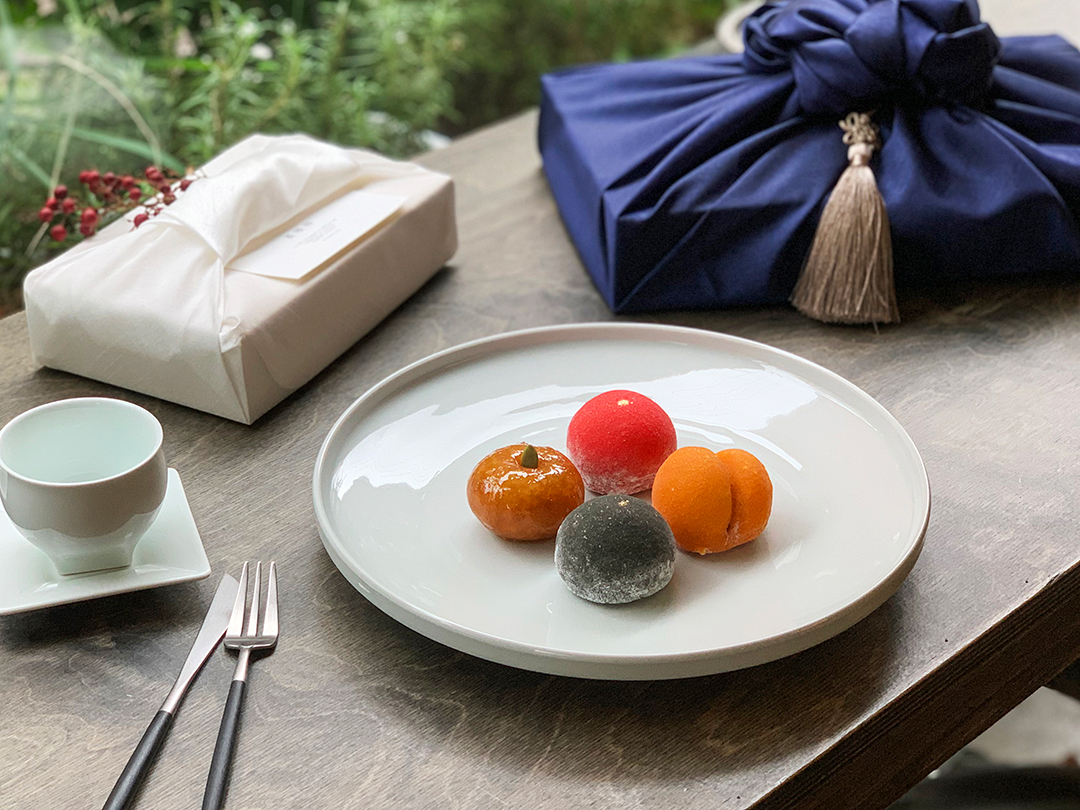 Chapssaltteok by ‘Chadamjung’
‘Salgu,’ ‘Ssukbli,’ and ‘Santtalgiwa Muhwagwa.’ These puzzling names are all on the chapssaltteok(Korean-version red bean mochi) menu by Chadamjung. You are first surprised at the shape of chapssaltteok and second at the taste. ‘Salgu’ tteok indeed looks like an apricot and features apricot puree and Ricotta cheese. ‘Ssukbli’ is a short for ssuk(mugwort), blueberries, and Ricotta cheese. It has Gorgonzola cheese, belonging to the blue cheese category, and pecans. ‘Santtalgiwa Muhwagwa’ means raspberries and figs which are simmered in wine before becoming the filling. “I’m not a big fan of soy or red beans. So I thought about adding new ingredients to tteok. I decided to create the filling with the fruits I like.” Owner Jung Ji-eun explains how she began using new ingredients that were rarely used in rice cakes and ended up creating unique flavors with a hint of familiarity. 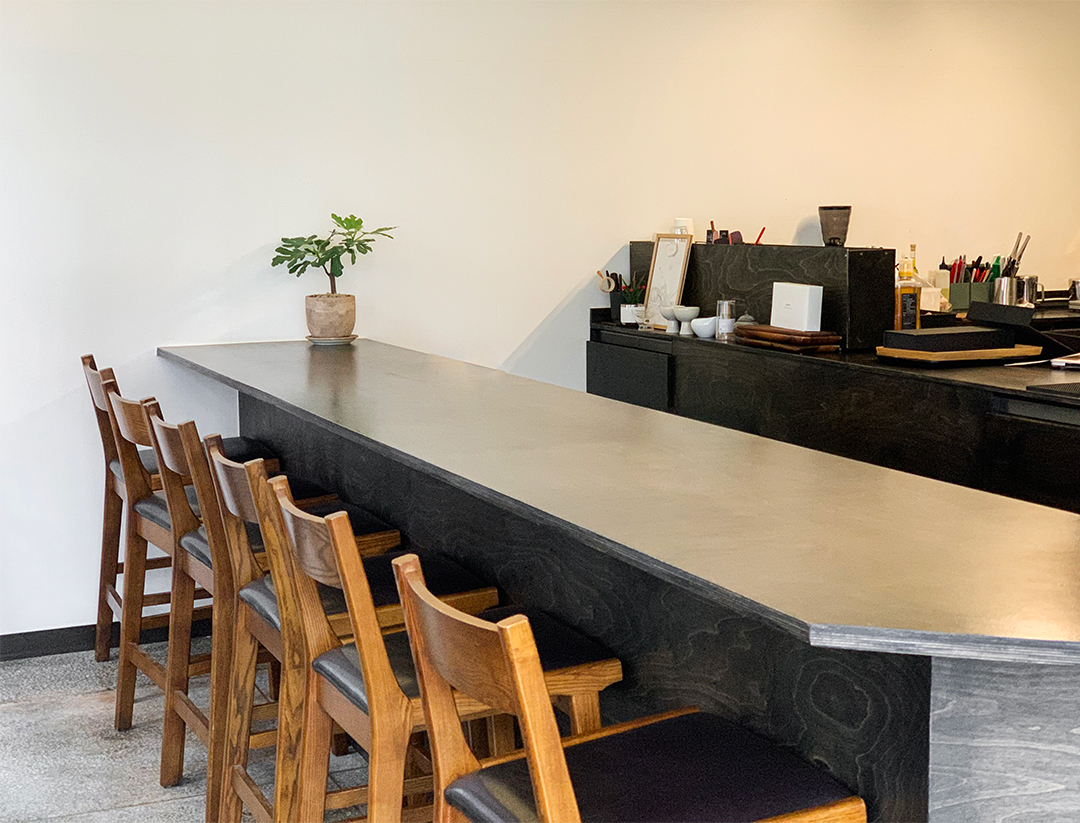 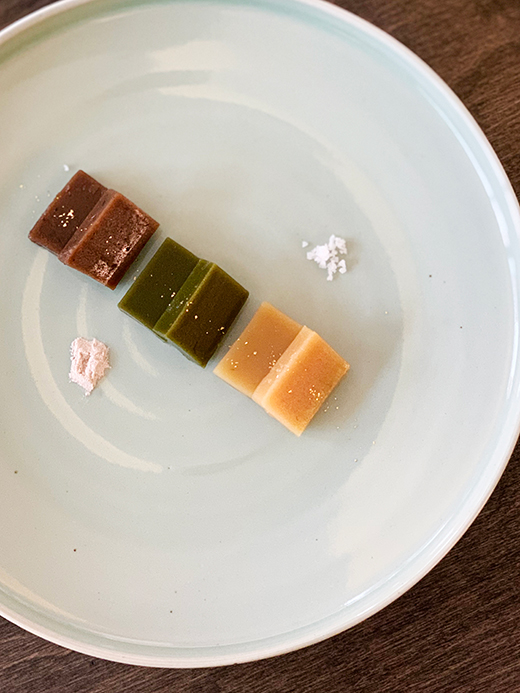 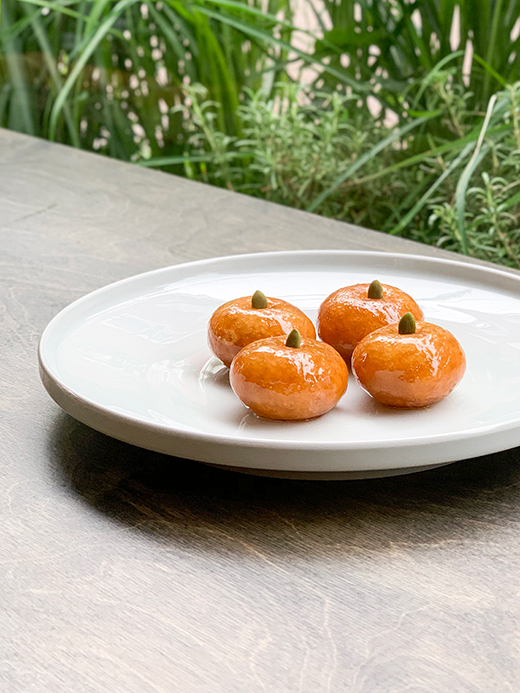 Chadamjung is a Korean dessert cafe opened in 2018 in Guwol-dong, southeastern Incheon. Although the cafe is small, it is definitely not in proportion to the affection and passion Jung and her staff have in regards to Korean desserts. Chadamjung has a great potential. “While working on desserts, I pay a great deal of attention to hygiene and the saltiness of the desserts.” She keeps a stash of salt that has lost all the brine in her grandmother’s house and uses it to adjust the flavor of her desserts. For a gift order, make a call one day ago. There’s no delivery service so you have to pick up the order. If you are visiting the cafe, try ordering Monakas that are made with fresh fruits from a local market, along with ‘Black Sesame Cream Latte’ or ‘Mugwort Cream Latte.’ Monakas are made to order. Red beans are replaced with seasonal fruits and homemade Ricotta cheese and fragrant basil are added. As a result, monakas sold at Chadamjung are similar to a salad. The refreshing flavor takes away any stress and fatigue you may have.
Address 11-16 Seongmal-ro 32beon-gil, Namdong-gu, Seoul
Phone +82-10-9255-0531
Instagram www.instagram.com/chadam_jung 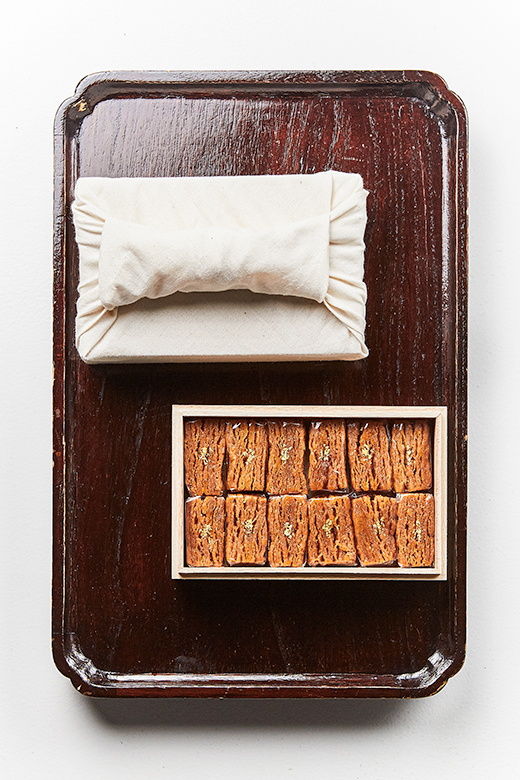 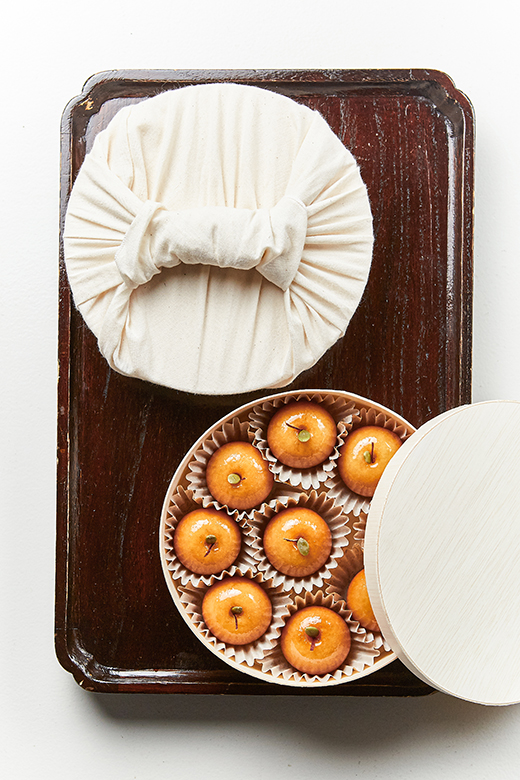 Yakgwa and Gaeseong Juak by ‘Kimssibooin’
‘Kimssibooin’ is a Korean dessert cafe with both traditional aspects and modern ambience. If you have some time, the best way to enjoy the charming cafe is to sit in the screened-in section and relax while tasting hangwa and tteok on soban, a small portable table. Or you can skip that and buy a gift set that contains both the taste and charm of the cafe. The most common oil-and-honey pastry in Korea, ‘Yakgwa’ literally means confectionery with a medicinal effect. ‘Gaeseong Juak’ is a valuable food that is only served during wedding ceremonies or important village parties. Yakgwa and Gaeseong juak are not only flavorful but pretty. With a gift order, each dessert unit will be placed in a wooden box and delivered to the designated address. 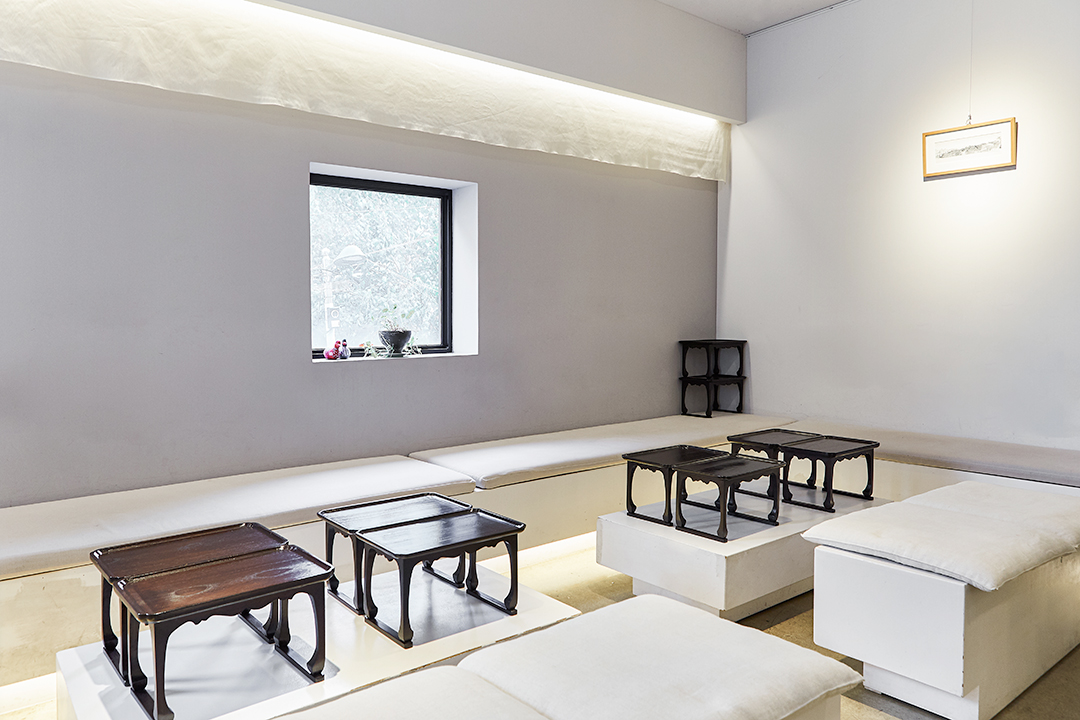 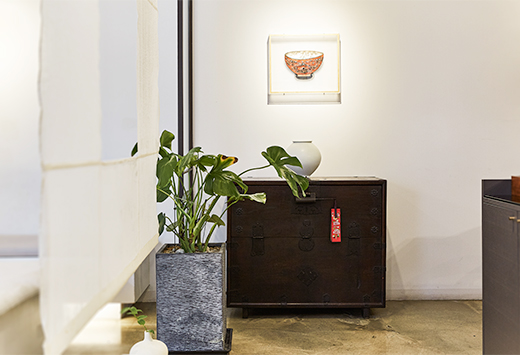 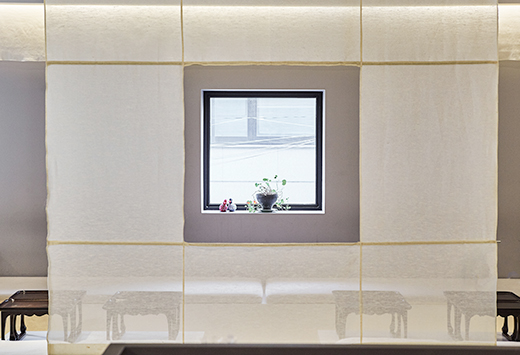 Kimssibooin was founded by Kim Myeong-suk in 2017 after she took up flower arrangement classes and European museum tours, which broadened her knowledge. She was a humanities major in college. “During my childhood I enjoyed eating tteok that my mother had made herself and spent time doing simple cooking. A full-time housewife fell in love with hangwa by accident. At Kimssibooin, we are recreating the taste and charm of Korean traditional food and the elegant dining culture.” From purchasing ingredients to completing the dishes, Kim puts her heart into every single dessert. Using clean cooking oil is part of her resolution. She explains that clean oil prevents bad odor from arising. If someone gives you yakgwa and Gaeseong juak, why not try to copy the beautiful plating by Kimssibooin at home?
Address 2F, Sapyeong-daero 26gil 26-6, Seocho-gu, Seoul
Phone +82-2-532-5327
Homepage www.kimssibooin.com 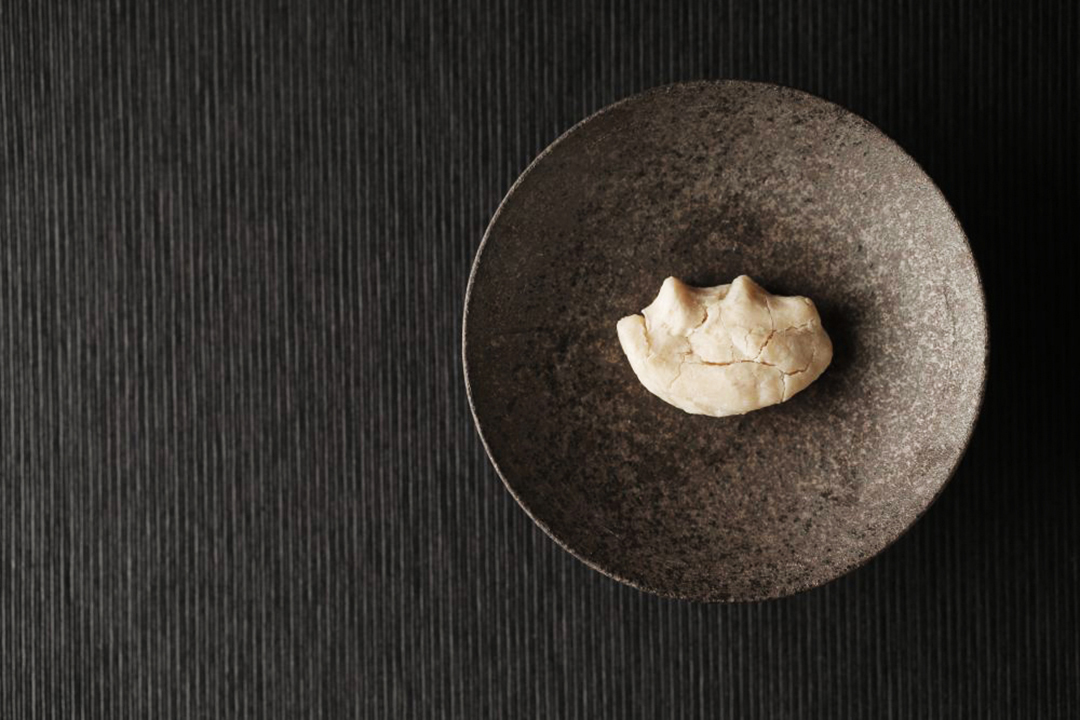 North Korean-style injeolmi by ‘Dosuhyang’
An old proverb has it that what looks good also tastes good. But that doesn’t quite suit injeolmi (rice cake made with glutinous rice and covered with bean powder) made by Dosuhyang. It’s only a slight exaggeration that Dosuhyang has taken over the injeolmi market with its North Korean-style product. Dosuhyang doesn’t sell anything else. Injeolmi boxes come in small, medium, large and extra large boxes, depending on the number of pieces inside them. The North Korean injeolmi is covered with adzuki bean paste. The message on the Website states that injeolmi at Dosuhyang are made with minimal amounts of seasoning and maximum amounts of heart and effort, using only the finest ingredients. Indeed, people there use stone mills to pound glutinous rice and make each injeolmi pieces by hand. They take the shape of closed fists and come in many different forms. But that’s what makes Dosuhyang’s injeolmi so endearing. It’s not overly sweet but it’s still so delicious as to keep you reaching for one after another. Once you’ve had a taste of it, you’ll keep coming back for more. It makes for a great gift for grown-ups and children alike. 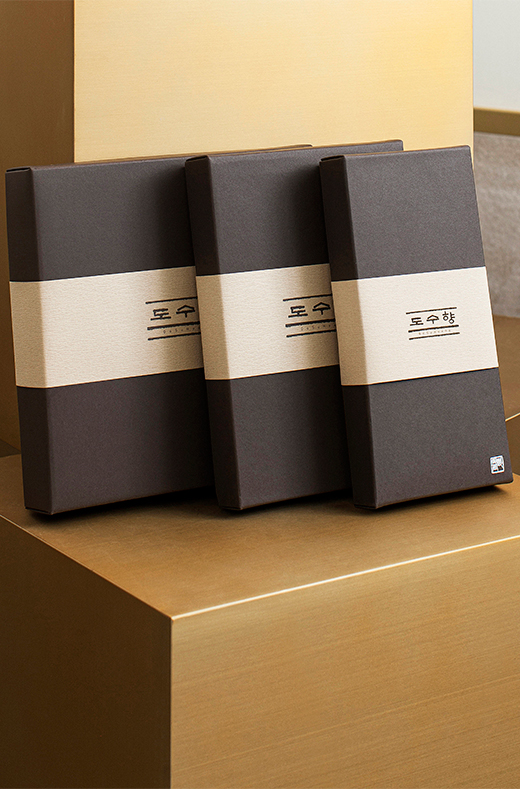 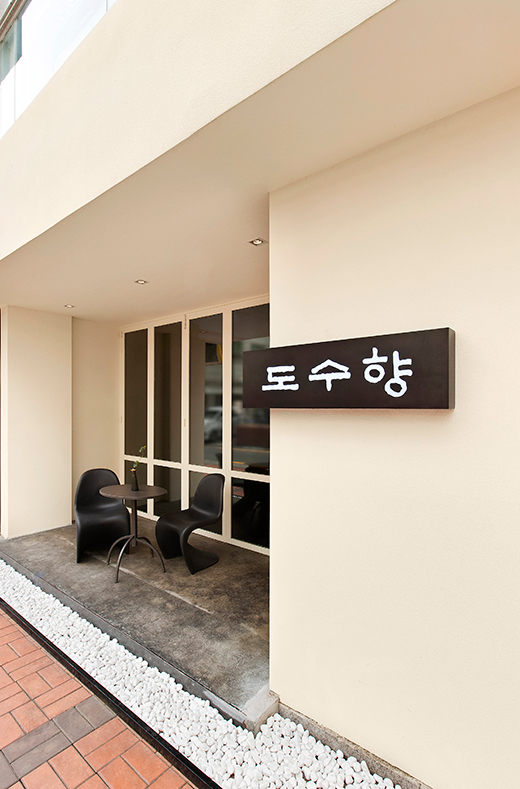 Dosuhyang is always on the list of must-visit rice cake makers in Seoul. It only sells products made on the given day. You may be out of luck at times, so it’s best to place an order in advance. For holidays, you can order your injeolmi two weeks ahead of time.
Address 21-4, Seolleungro 161 gil, Gangnam-gu, Seoul
Phone +82-2-540-2939
Homepage dosuhyang.com 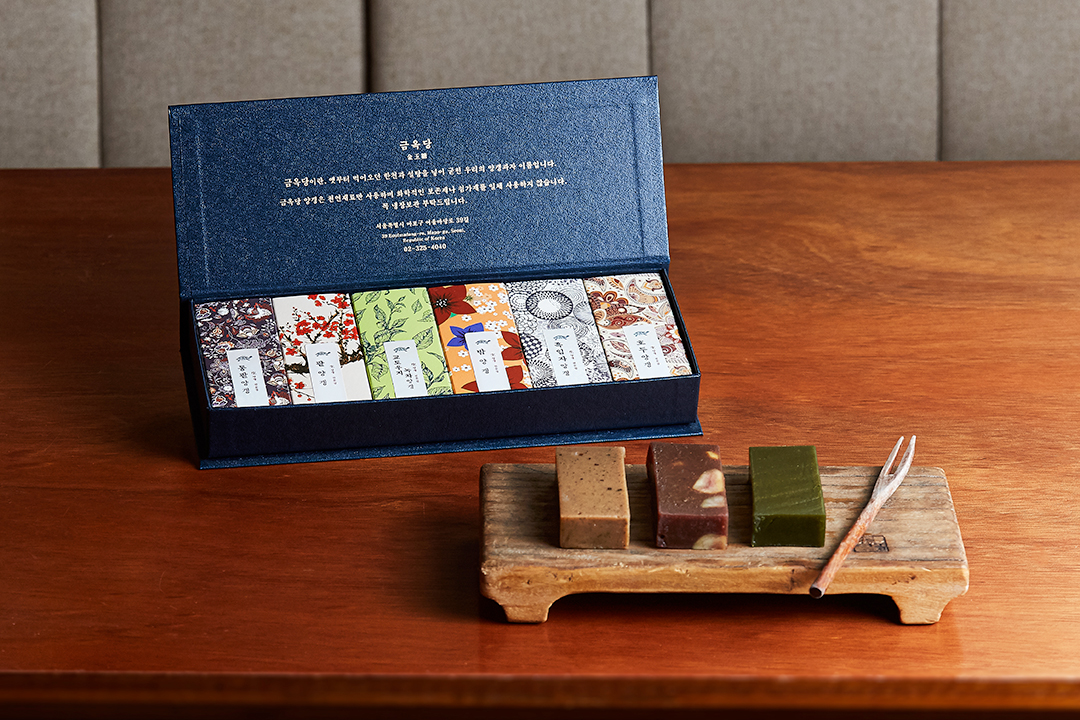 Yanggaeng of ‘Guemokdang’
Having originated in China, yanggaeng(sweet red bean jelly) was a big hit in Japan and was subsequently developed there. Koreans think of it as a popular traditional dessert. Made by boiling red beans, yanggaeng has a smooth texture and a sweet taste. But its texture and taste are not always compatible with everybody. For them, we recommend trying Geumokdang yanggaeng. It might make them rethink their preferences. Geumokdang has a total of 16 flavors, including red bean, chestnut, green tea, walnut, raspberry, milk tea, jujube, sweet pumpkin, black sesame, cranberry, and Pistacchio, to name a few. There’s gotta be at least one flavor that could bring a change of heart. 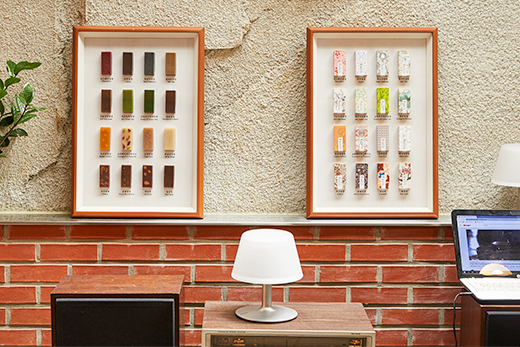 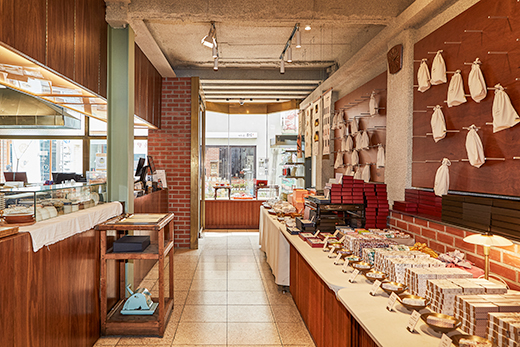 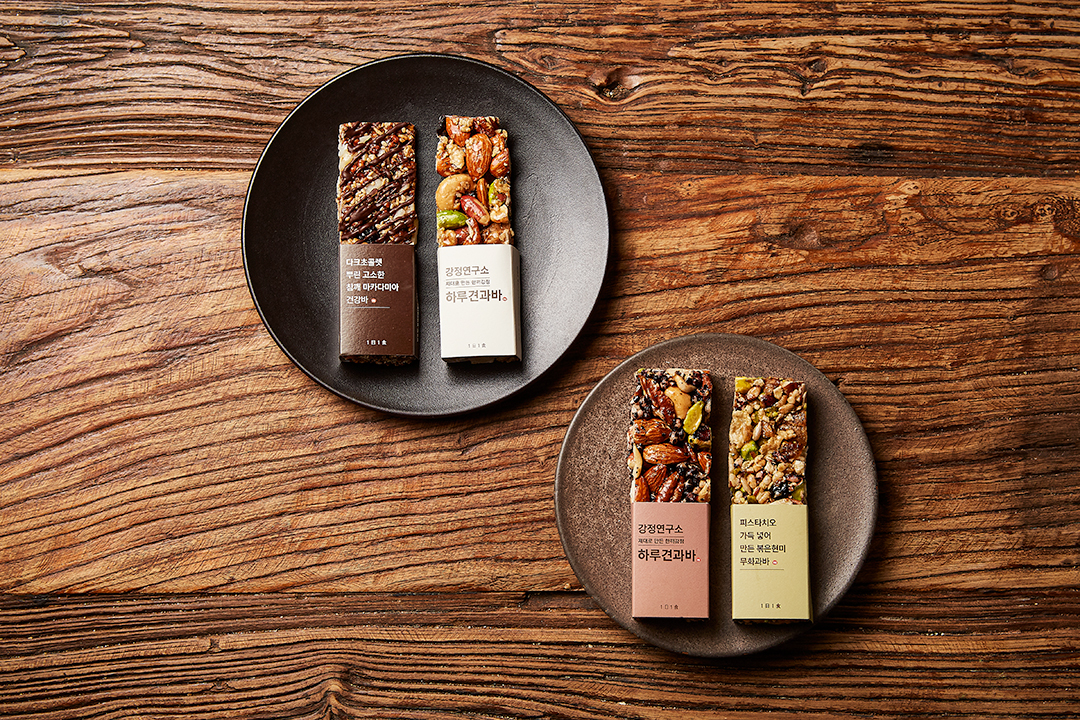 Gangjeong by ‘Gangjeong House’
Gangjeong is a traditional confectionery that was served on a special occasion, along with yakgwa and dashik(tea confectionery). There are various gangjeong types including soy, sesame, and pine nut. ‘Gangjeong House’ CEO Hwang In-taek focuses on diversifying Korean desserts under the slogan ‘Young Tradition.’ Eleven years ago, he wanted to find a way to enjoy gangjeong more easily instead of just on special holidays. He believed that nutritious main ingredients including various nuts and dried fruits and the healthy gangjeong recipe could be used to create a new dessert that is even better for the body. Out came the brand’s signature ‘Energy Bar’ which is easy to carry around and packed with nutrients, courtesy of peaches from Icheon, figs from Haenam, and local sesame seeds and walnuts. Homemade at the shop, there are seven types of Energy Bar. 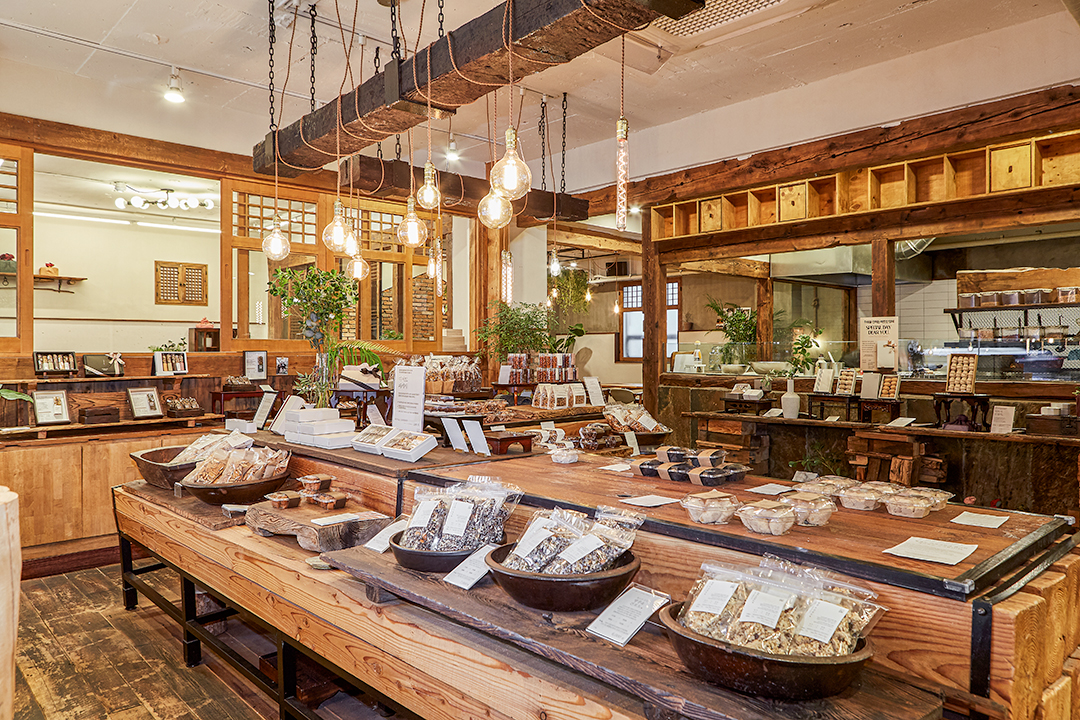 The ‘1 Day 1 Bar’ package lets you enjoy different flavors each day. Containing nuts, cereals, and dried fruits, the Energy Bar is a great gift item for those who are too busy to have a proper meal every time. Having started the business with gangjeong, ‘Gangjeong House’ has widened its horizon, selling various Korean desserts and drinks based on innovative ideas by professional chefs. Among their steady sellers is a beverage named ‘Rich Latte’ which offers nine different cereals and savory nut-based cream on top for a filling drink.
Address 435, Hakdong-ro, Gangnam-gu, Seoul
Phone +82-2-2201-0447
Homepage gangjeonghouse.com