Michelin-Starred Restaurants at LOTTE HOTEL
There are several different reasons you pick your travel destination. And many people will visit certain place to enjoy some great food. LOTTE HOTEL and SIGNIEL have just the right places for such travelers. Come join us for a tour through Michelin-starred restaurants.
From a large number of publications that evaluate restaurants around the world, and stand out. , launched in the early 1900s, isn’t just the oldest guide of them all. In terms of credibility and recognition, it’s second to none.
Why Michelin Stars are Special
began awarding stars to restaurants that it reviews in 1936. Since that time, it has looked at some 30,000 restaurants in 30 regions on three continents. Chefs and restaurants with stars instantly become household names, and it quickly becomes nearly impossible to book a table there. They really become star chefs.
And Michelin-starred restaurants also help their local economy. Mirazur, which received three Michelin stars and topped ‘The World’s 50 Best Restaurants> in 2019, is located in Menton, a coastal town in southeastern France. People flock to the modest town just to eat at Mirazur. And the G8 Summit took place in the small Hokkaido town of Toyako in Japan thanks in no small part to the Michelin three-star restaurant, Michel Bras. Global leaders were willing to visit such a remote town just so they could sample food from a Michelin restaurant.
In Korea, a globally-renowned chef opened a restaurant to much fanfare: Pierre Gagnaire à Séoul, on the 35th floor of the executive tower at LOTTE HOTEL SEOUL. 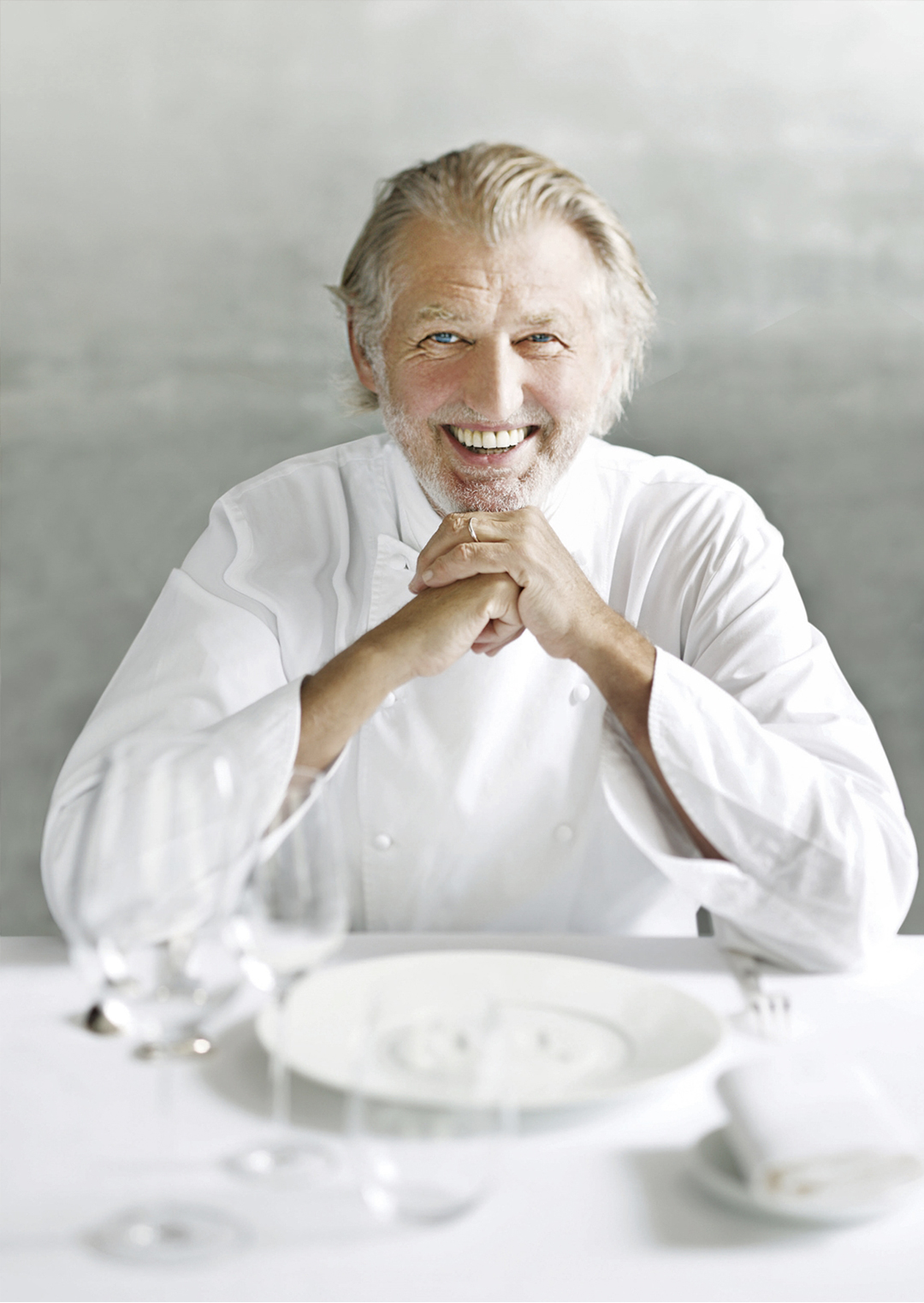 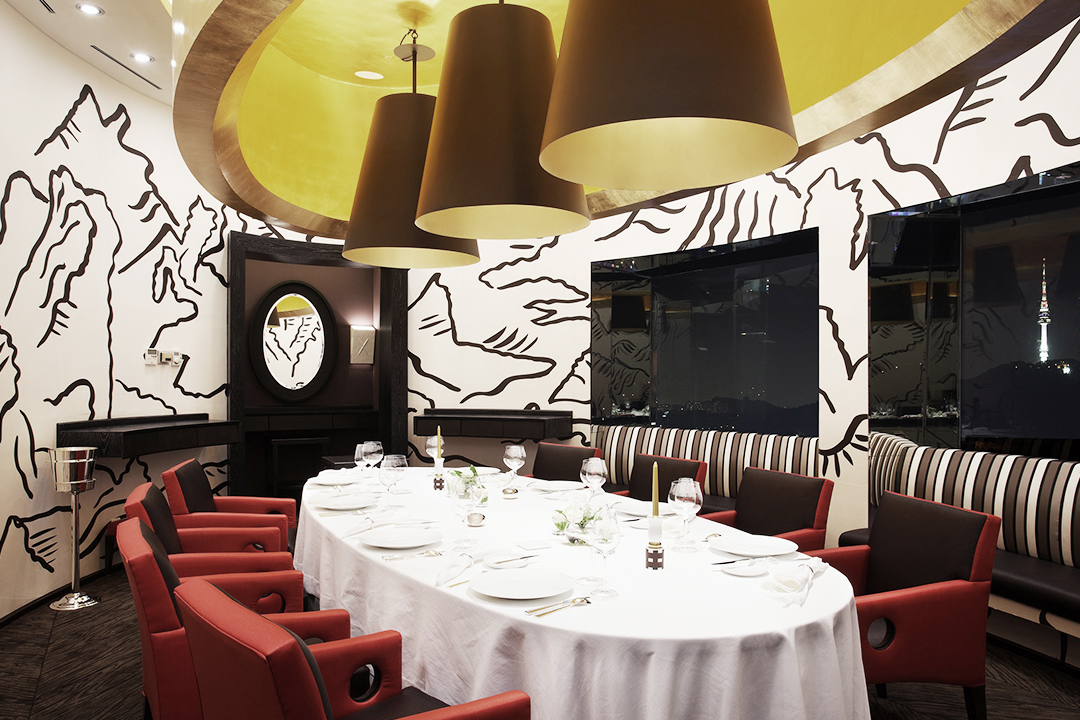 Pierre Gagnaire à Séoul by Pierre Gagnaire
Pierre Gagnaire à Séoul is run by chef Pierre Gagnaire, nicknamed ‘Picasso of the palate’ for his inimitable style that has won praises from epicures worldwide. It’s the only restaurant in Korea bearing his name, a place that presented the essence of fine dining. Whether it’s in the kitchen or in the service, it adheres to the lofty standards set by ‘Pierre Gagnaire Paris.’ It also makes the most of the seasonal Korean ingredients to deliver distinct local flavors. Today, Gagnaire’s protégé, Frederic Eyrier, is in charge. Gagnaire himself is in constant communication with his Korean staff, and makes two, three visits to the restaurant each year to interact with his patrons. Pierre Gagnaire à Séoul earned a star in the Seoul edition of in 2020.
Pierre Gagnaire à Séoul offers separate menus for lunch and dinner, with the former offered at pricing that makes French cuisine more accessible. For dinner, the authentic southern French dishes, Gagnaire’s signature, are offered, along with top-notch service. 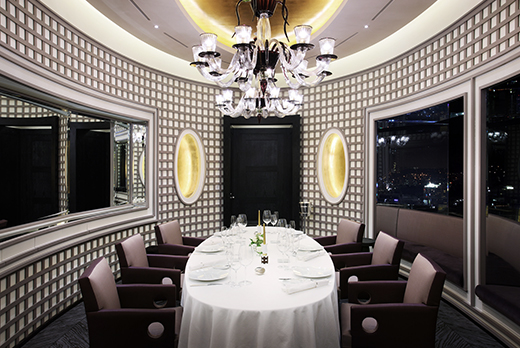 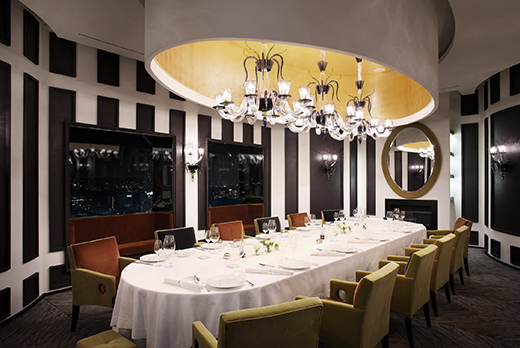 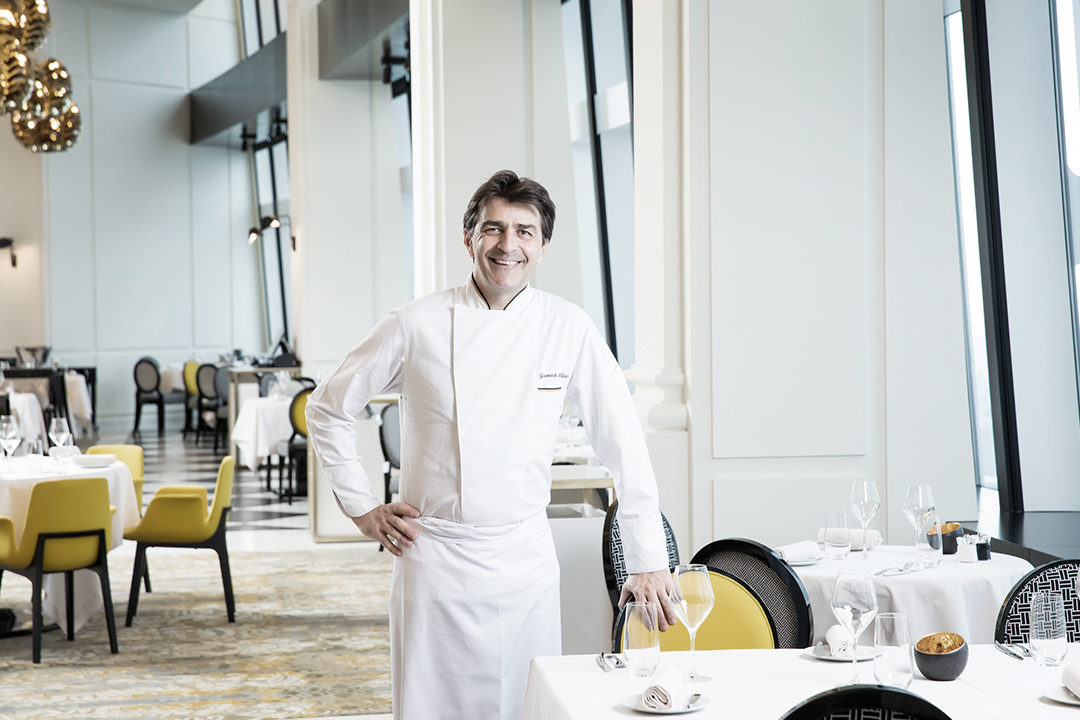 STAY by Yannick Alleno
Where Gagnaire is the Picasso of the palate, Yannick Alleno is the ‘prince of the palaces.’ And he made a grand entry into the scene, with his Alleno Paris winning three Michelin stars every year from 2014 to 2017. Also in 2017, ‘Le 1947’ received three stars. France fell in love with Alleno. In 2016, magazine named him the ‘Chef of the Year’ for 2016. This is a truly star chef.
STAY is a modern French restaurant that Alleno opened on the 81st floor of SIGNIEL SEOUL. The hotel strives to be the top luxury hotel in the country, and it was only the natural course of action, not to mention important, to ensure its guests would get to dine at the finest restaurant, too. Gourmet hotels that offer world-class rooms, services and fine-dining experience will always overflow with travelers and epicures alike. Working with Alleno was a no brainer for SIGNIEL SEOUL, which has designs on becoming a great gourmet hotel.
In addition to running STAY, Alleno is the executive director of food and beverage at SIGNIEL SEOUL. STAY received one Michelin star in both 2019 and 2020. 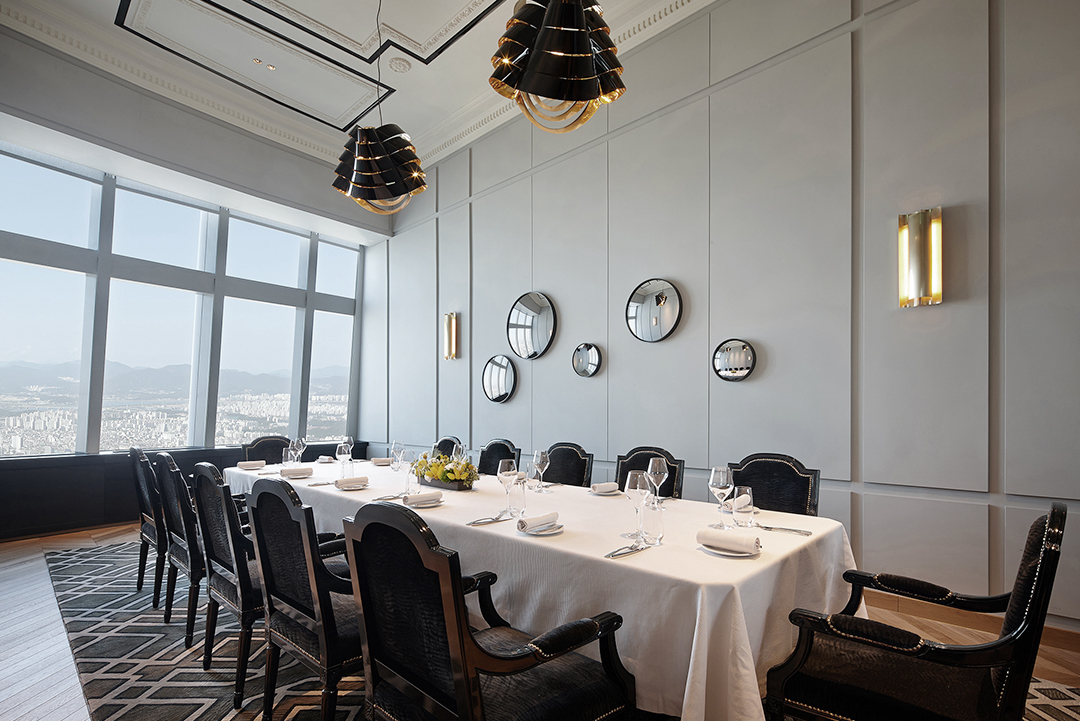 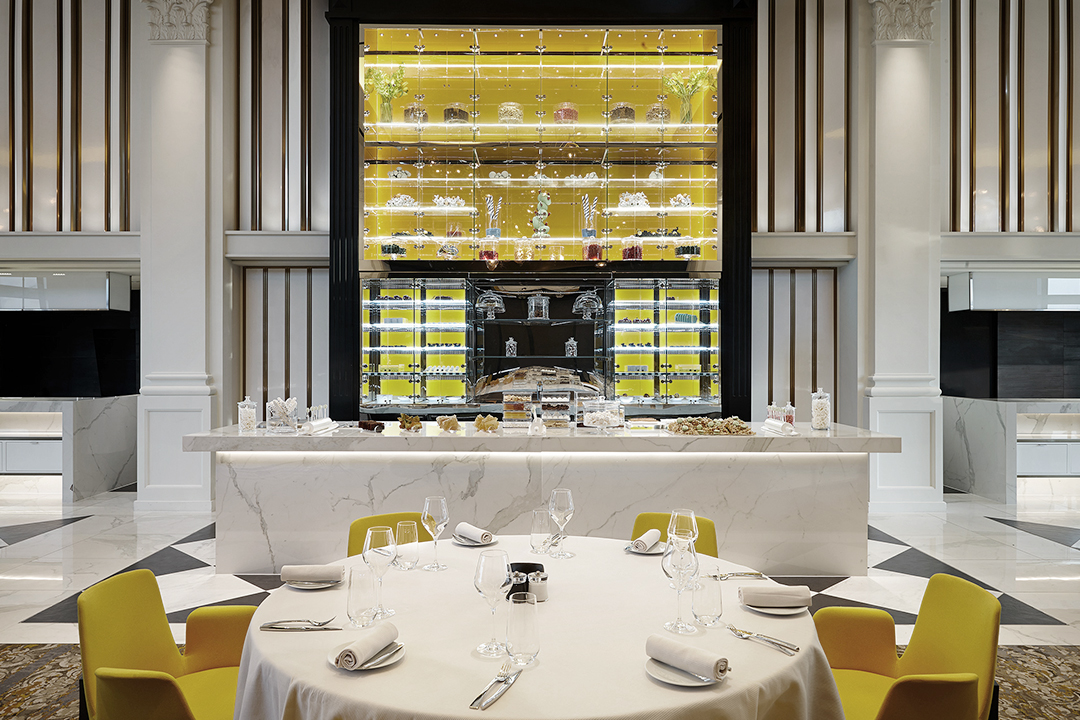 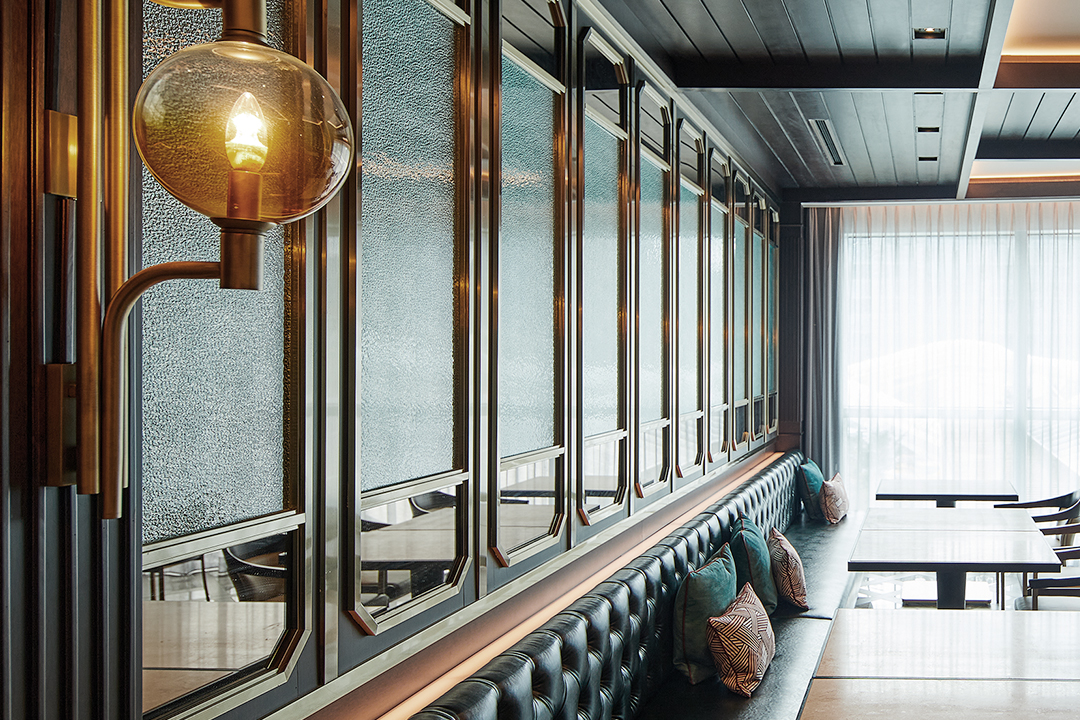 Chaoran by Lee Che Liang
SIGNIEL BUSAN, the second SIGNIEL location after Seoul, also provides unforgettable dining experience with the help of world-class chefs. Chaoran, a Chinese restaurant serving the Cantonese cuisine, is SIGNIEL BUSAN’s top dinging destination. It serves dim sum and tea during the day, and cocktails by night.
Chaoran quickly became the talk of the town in the early days of SIGNIEL BUSAN thanks to its distinctive interior and its chef. Straight out of the 1920s enlightenment-era Hong Kong, the restaurant instantly became an Instagrammable place. Chef Lee Che Liang had a successful run at a Michelin-starred restaurant in Britain, Hakkasan London. Back then, Lee’s dim sum was considered the most delicious in London. Chaoran’s top items are dim sums and Chinese-style BBQ. Stylish dishes remain true to the essence of the Cantonese food. ‘Chaoran bar,’ the modern Chinese tapas and bar, offers signature cocktails, internationally-renowned liquors and Chinese tapas. 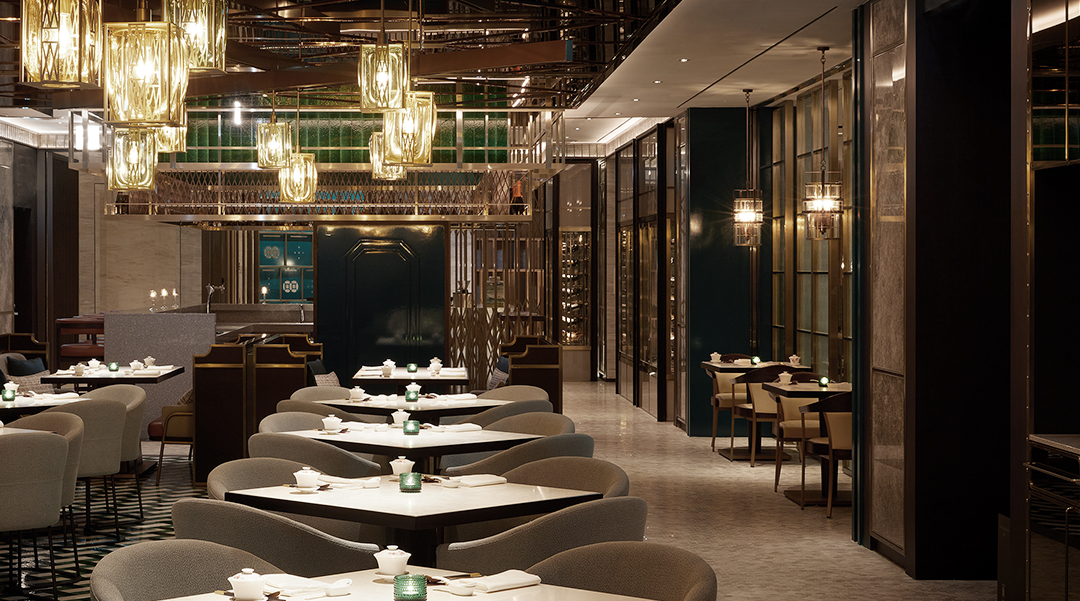 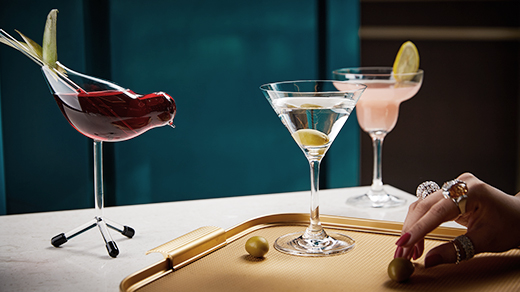 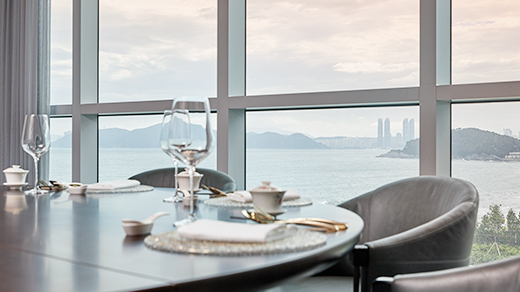 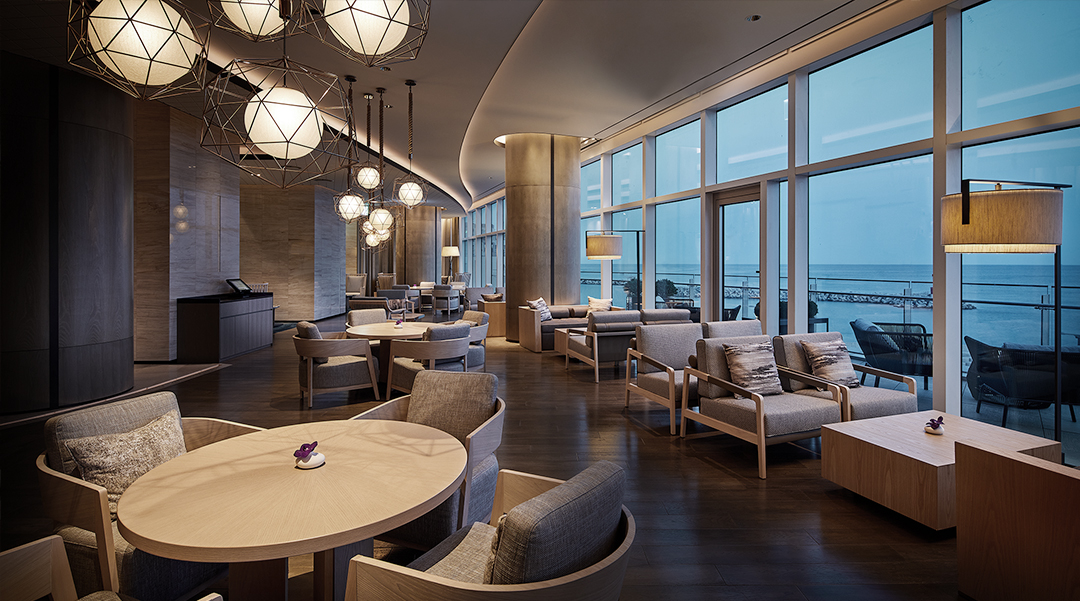 The Lounge by Bruno Menard
It must be in the genes. Bruno Menard, who runs The Lounge and Pastry Salon at SIGNIEL BUSAN, received three Michelin stars in his first Michelin review while working at L’Osier in Tokyo. The living legend became the first chef to win that many stars in his first try. Growing up under a chef grandfather and a chocolatier father, Menard picked up cooking at age six. He has spent time in southern France, Atlanta, Tokyo and Singapore, and such a wide range of experiences manifests itself in his dishes. Menard is a judge on the popular TV series .
In time for SIGNIEL BUSAN’s opening, Menard consulted on the signature dish and dessert at both The Lounge and Pastry Salon. The Afternoon Tea Set at The Lounge has been a hit with the 20-30 crowd, and a collaboration with a luxury sports car brand has also turned heads. 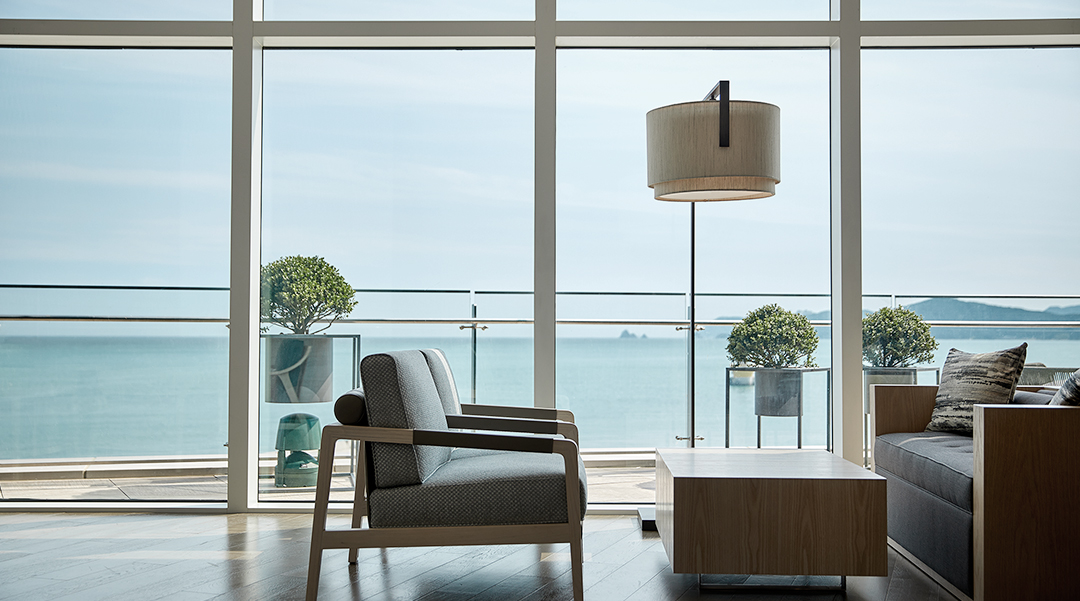 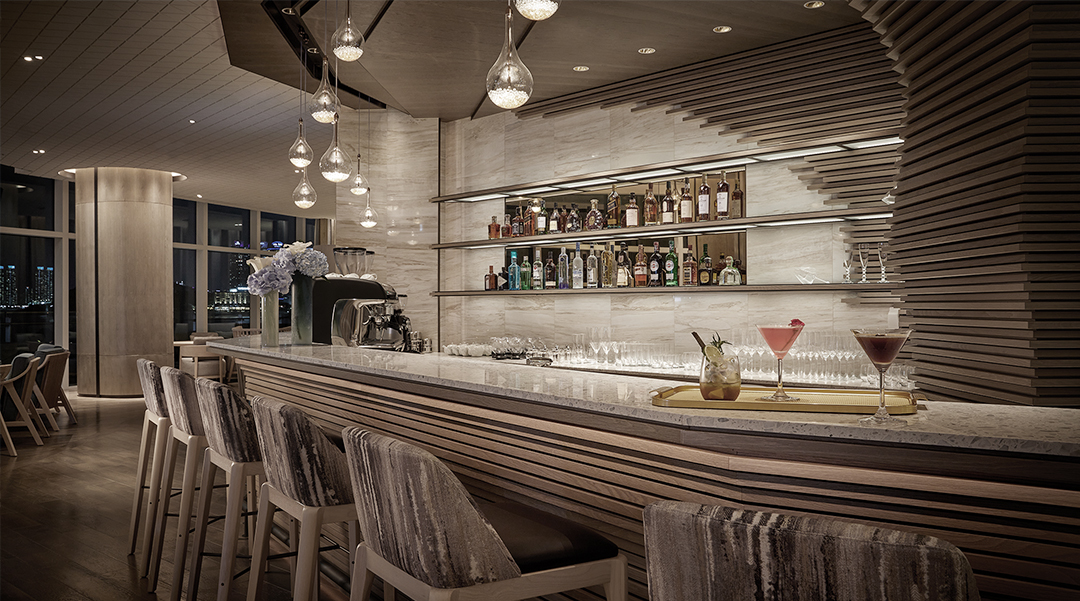