Jeju Presents Delectable Galchi in October
Jeju Island is reporting a rise in its hairtail catches with the arrival of autumn season. It means more people can enjoy the island’s signature ‘eungalchi’, the long, slender, and silvery largehead hairtail, or cutlassfish.
The summer of 2020 in Korea was completely overwhelmed by constant downpours. The rain streaks that dampened the nation from June through August have ended with a set of typhoons. Not enough sunlight has brought a concern in regards to the autumn agricultural harvest in the country. Nevertheless, some good news has been heard from the maritime sector. The Jeju-do fisheries production trend for the second quarter of this year showed a significant increase compared to the previous year. The total fisheries output recorded 22,820 tons, which is 3,175 tons, or 16.2 percent more than the same period last year. The biggest contribution came from hairtail(5,641 tons). It’s an astonishing 59-percent jump from last year. Anchovy(4,169 tons) and croaker(270 tons) also provided good yields. Farmed flatfish, sea bream, and abalone outputs also soared. If the coronavirus situation improves in the near future, Jeju Island will serve as a great destination for epicurean traveling in autumn. In the meantime, you can have the Jeju specialty delivered to your home and enjoy the gourmet meal safely and comfortably. 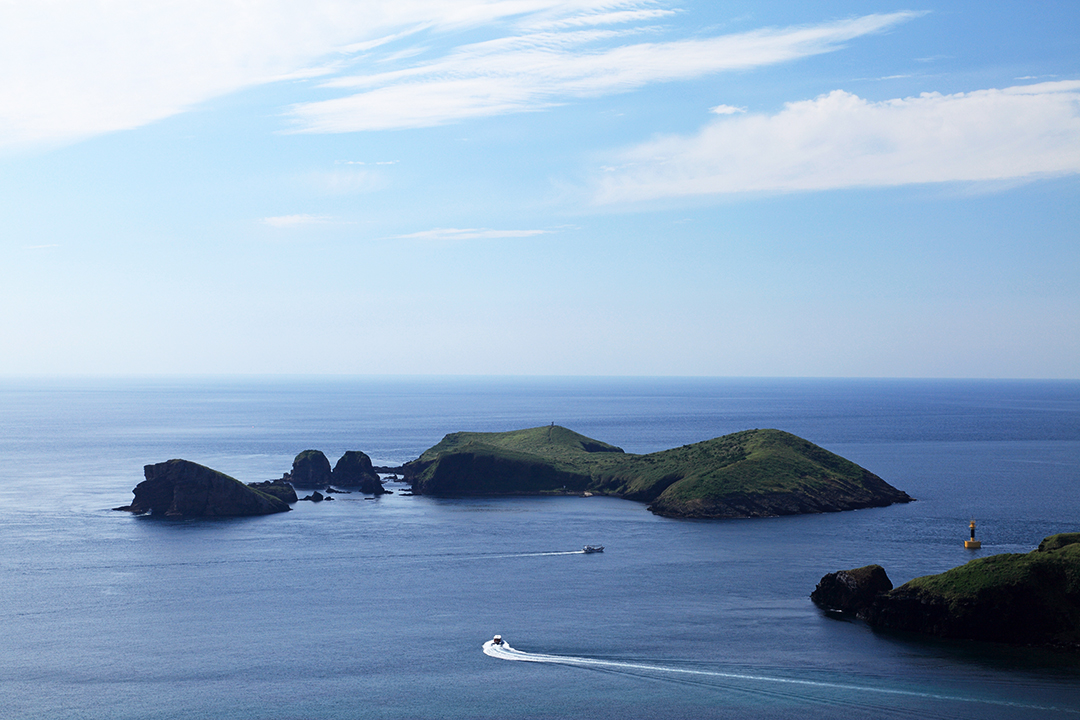 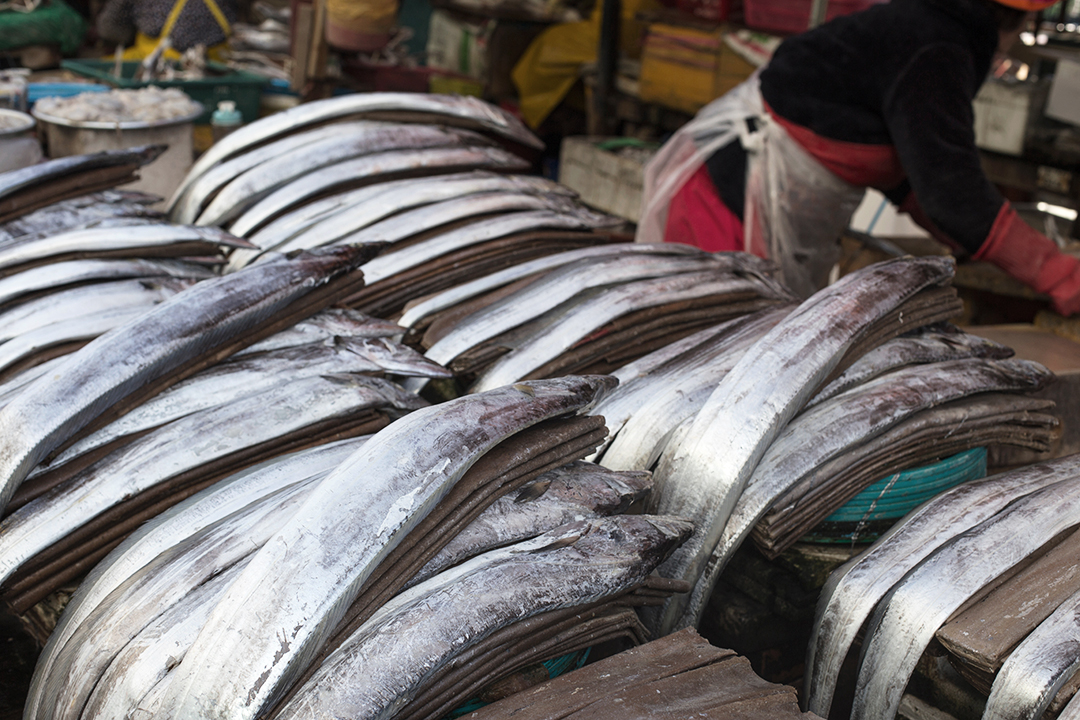 Why Warm-Water Hairtails Are Good in Fall
Warm-water hairtails can live anywhere in tropical and temperate oceans. They are found worldwide in the waters around North Africa and the Middle East to the South China Sea, as well as South Korean and Japanese coasts. Although their main habitats are formed in the distant seas, they swim closer to the shallow waters in August and September during the breeding season. Largehead hairtail is considered either a summer or autumn fish. Both are correct in a sense. In summer, the fish carry eggs. After spawning, they have a tendency to store nutrients, which means they taste sweeter. However, the month of July was designated as a no-fishing period as the hairtail catch has dwindled quite a bit compared to before. It now seems more ‘justifiable’ to say October is the season of hairtail.
Of course, you can enjoy the fish pretty much year-round as the refrigeration technology made advancements and imported hairtails are easily accessible. In the recent past, when Jeju’s hairtail population became scarce, large amounts of hairtail were imported from Senegal. Currently, Korean markets sell not just them, but also the ones caught in the seas off the Middle East and the Philippines. Celebrity chef Park Chan-il wrote in his book that he had gotten tired of eating ‘cheap’ Mediterranean hairtail while he was studying in Italy. 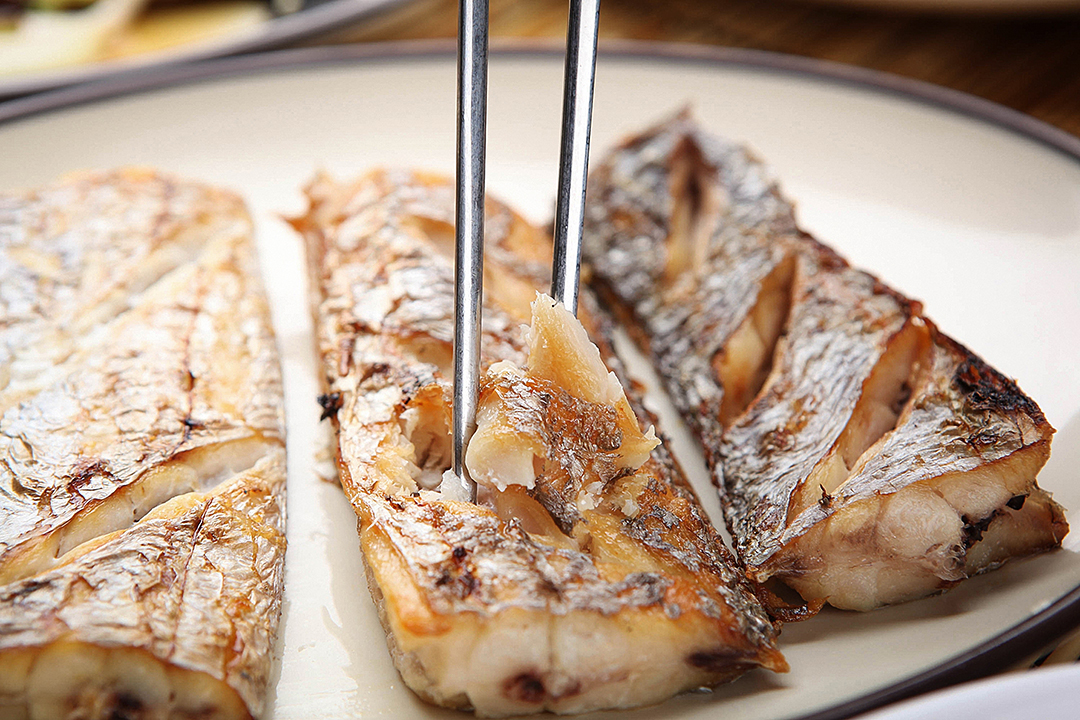 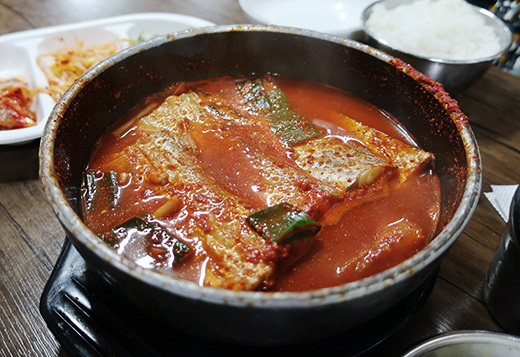 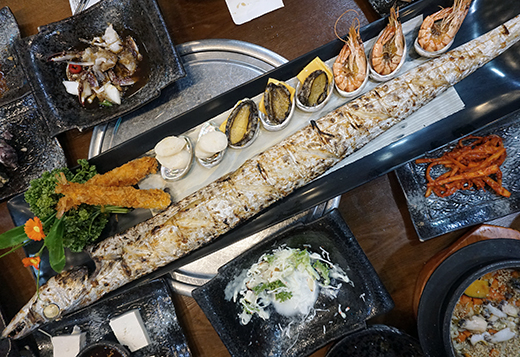 Then, what determines a tasty hairtail? It’s a difficult question to answer. As the expression ‘sintoburi’ goes, Koreans find the hairtail captured in the Korean sea the best. It alternatively means there is no answer that can be universally true for all citizens around the world.
There is a way to distinguish the origin of hairtail to see if it’s domestic or foreign. Korean hairtail catches take place in the southern coast around Jeju Island, Busan, and Yeosu. Japan lies to the east of Jeju Island. Being in close proximity, Korean and Japanese hairtails belong to one species. (Differences exist even among the same species).
The rest is categorized mostly as ‘southern galchi.’ To learn the differences between the species, let’s go over the Korean hairtail fish first. 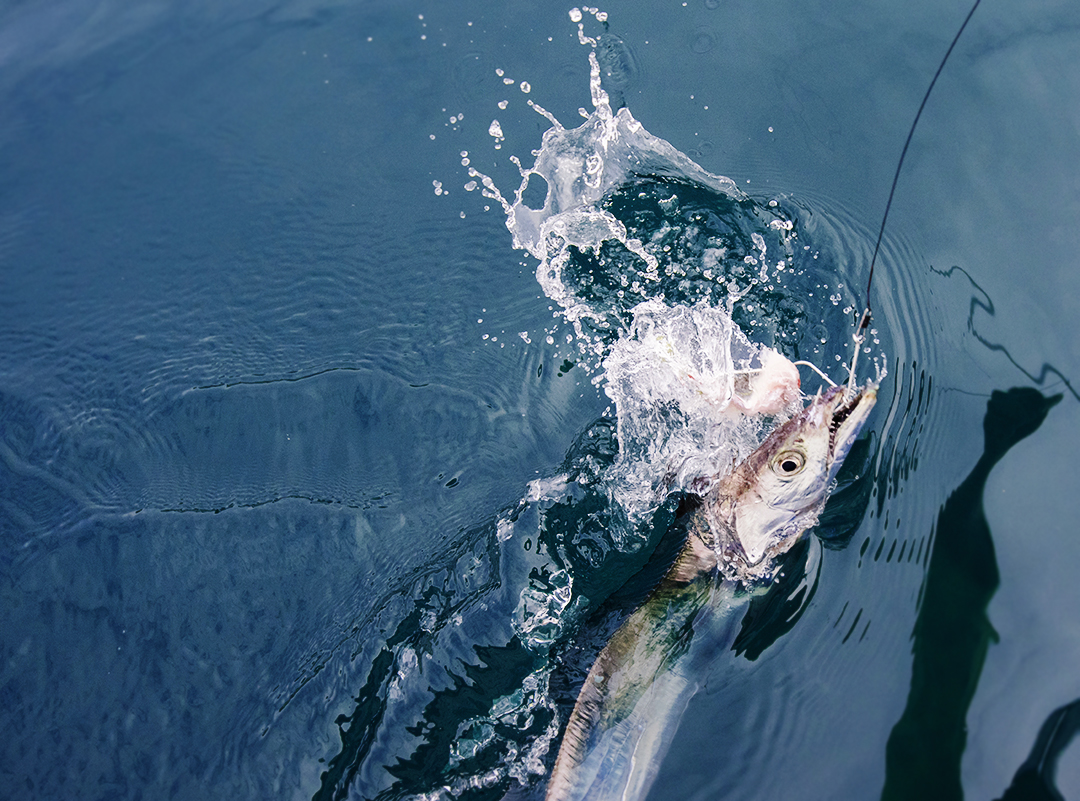 Galchi Encyclopedia
Koreans apply three names to hairtail— eungalchi, meokgalchi, and heukgalchi. The hairtails dwelling in Korean seas may have different colors but the same origin. It has been found between the depths of about 0-500 meters. The latter range is within the deep sea but the fish we eat are usually caught at around 100 meters in depth.
Eungalchi is the hairtail that retains its silvery appearance, having been captured with a fishing line. Its brilliant color pleases the eye and also indicates the freshness. Being good to look at and fresh means it could cost more. You should be ready to make a hefty investment to taste a fresh, meaty eungalchi. Meokgalchi is silver gray. Its color changed from the original silver, as the scales were damaged in a fishnet. Meokgalchi is found in the deeper waters and is considered a tougher variety than eungalchi. It has a bigger mouth and sharper teeth. It is also without a tail fin. Meokgalchi is more common than eungalchi but its flavor is just as good. Heukgalchi is the hairtail with blackish scales. It is often caught with a fishing line near Busan and, occasionally, in the sea off Jeju-do.
‘Pulchi’ is another type of hairtail fish. It is a young hairtail that is often misunderstood as a sort of anchovy. The smaller galchi is dried in the sun and seasoned before eating. As the galchi flesh is known for its tenderness, the pulchi meat is even more tender. Unlike anchovies that can be stir-fried to be served as a side dish, the flesh of the young hairtail immediately breaks down when put on a stove. That is why it is dried and then mixed with a spicy seasoning. Called pulchi muchim, the dish is known as a delicacy, but difficult to find these days. To protect the young fish population, the very minimum amount of pulchi that inadvertently got caught in the nets cast for anchovies can be sold on the market. 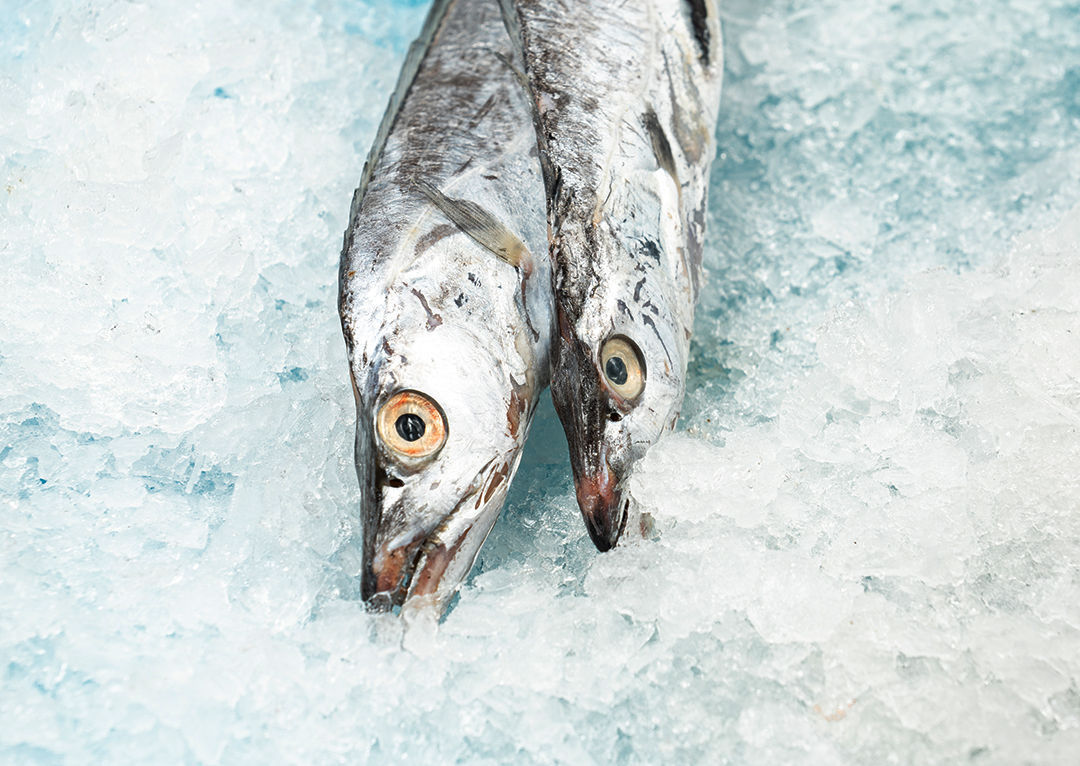 Eyes Tell Everything
Considering the hairtails caught in Korean waters get different names depending on their habitats, fishing depths, and catching methods, it is no wonder that the imported hairtail has just as many, if not more, unique features. Korean galchi has a black pupil in the white of the eye whereas the ‘southern galchi’ has a yellow pupil. Korean galchi has silver fins which later turn yellow whereas the foreign hairtail has light yellow fins that become darker.
The biggest advantage that the imported fish has over its domestic counterpart is in its size. Due to the greater size, bone fragments resembling a human tooth are often found in the fish. If you are to debone an imported hairtail, you may find tooth-shaped bones. These bones come in various sizes and shapes as well, depending on their position within the fish. A fragment found in the belly may resemble a human canine tooth, and if you find one near the anus a molar. It could be terrifying to imagine these bone fragments could actually belong to humans as the hairtail is carnivorous. Rest assured that it is a groundless concern. Living near the deep sea, parts of the flesh near the fins of hairtail are calcified into cartilage known as ‘otolith’ which seems to help the fish withstand the water pressure at a depth. 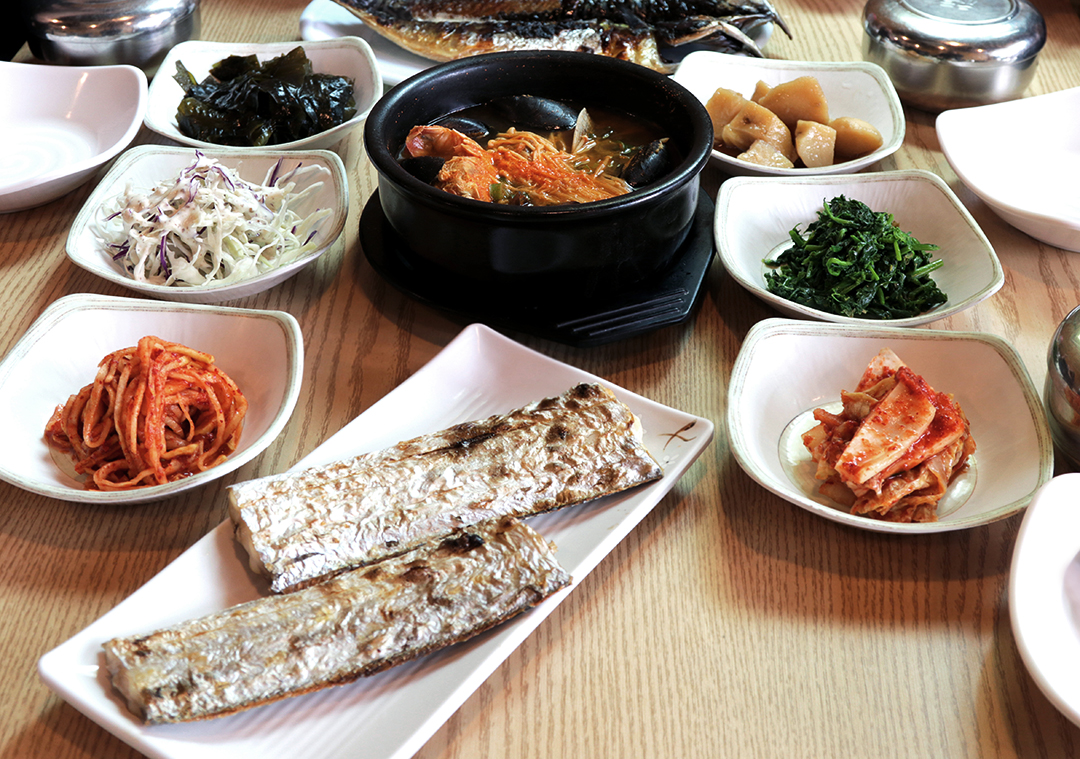 From National Fish to Fancy Cooking Ingredient
Although it is now considered an expensive seafood, the hairtail was part of the commoners’ food from long ago. Seo Yu-gu, a Silhak scholar during the era of King Jeongjo in the late Joseon dynasty, wrote in his book to ‘eat salted galchi to save money.’ It shows the general perception regarding the hairtail fish back in the old days.
Ji Gyu-sik, in charge of supplying ceramics to the palace and government offices, left a personal journal recording the 20 years from 1891 to 1911. It is one of the most important historical data with information on the customs of the late Joseon period. There is a recount of a story in which Ji paid 1 nyang(a unit of old Korean coinage) for galchi he had with drinks. According to the journal, a bowl of cold noodles and oriental melon also cost 1 nyang, respectively. He gave 5 nyang for condolence money at a funeral. It can be assumed that galchi was not expensive in that era.
The situation changed after the 1990s. Up until the 1980s, the hairtail was on the affordable side. The decreasing yield since then, however, has raised the price of the fish, resulting in the importation of hairtail fish from Africa, Middle East, and the South Pacific. All fish migrate across the seas to find the perfect water temperature for themselves, but the hairtail seems to be a bit more affected by its surroundings. Records show that the hairtail was found across all Korean seas in the Joseon era, but that the catch took place in different locations every season. The volume of hairtail landings, which has been on the decline since the 1980s, began going up again from the late 2010s on account of warming sea waters. Galchi is indeed an all-rounder as it can be grilled, braised, or made into a soup. Rich in protein, fat, essential amino acids, and vitamins, the fish also has high levels of calcium and phosphorus, which help bone health for women and the elderly. Its DHA content is great for the brain development in growing children, and oleic acids are beneficial to those with vascular diseases like arteriosclerosis. These are just a few reasons why we anxiously await Jeju galchi in October.