Georgian Food Captivates Russian Gastronomes
Once you experience the delicacies of Georgia, you also get to understand why Russians love the food of their neighbor so much.
Land of Myths and History, Georgia
Georgia, once called Gruziya, is a country that appears in Greek mythology many times and has gone through numerous adversities in its history, including invasions by neighboring powers.
According to Greek legends, Jason and the Argonauts traveled to Colchis, where modern-day Georgia is located, in search of the Golden Fleece. Colchis was also the land where Prometheus was punished by being chained to a mountain, believed to be Mount Kazbek of Georgia, while an eagle ate at his liver for revealing to humans the secret of fire. It was Batumi, Georgia where St. George, the legendary dragon slayer, had a battle with dragons. The once prosperous Kingdom of Colchis underwent the rule of Greece, Rome, Arab, Byzantium, Persia, Mongolia, Osman Türk, Russia, and the Soviet Union before finally becoming an independent state in 1991. 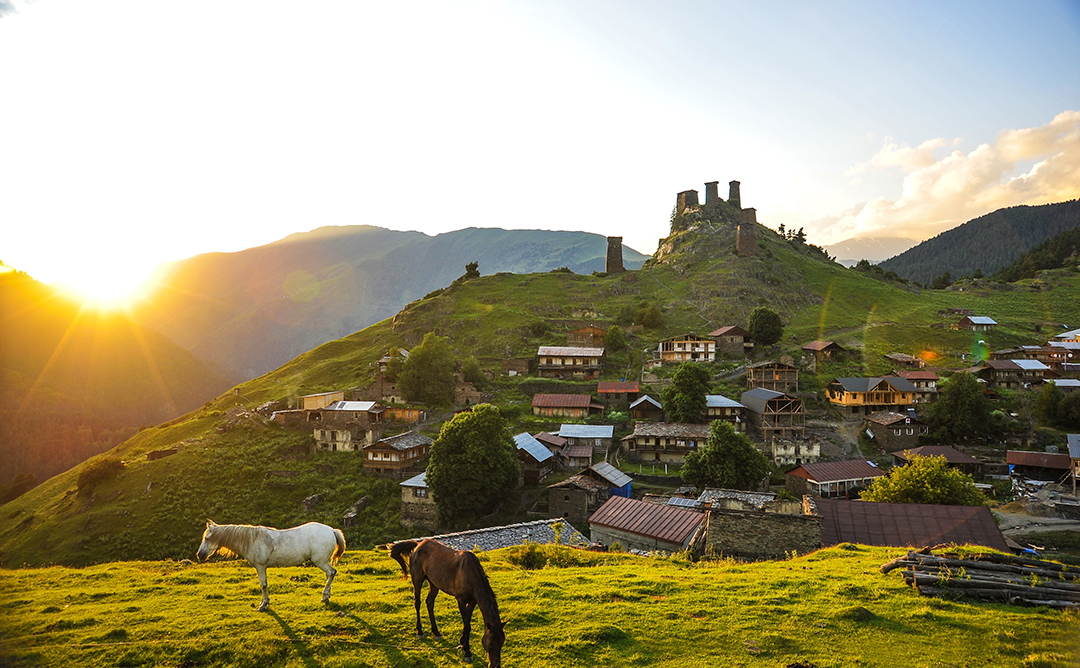 Restaurants specializing in Georgian food currently occupy over 10-percent in the market in large cities across Russia. It means one out of 10 restaurants make Georgian cuisine, which is significant enough to rival Italian restaurants. Until recently, Japanese food including sushi was ranked second after Italian cuisine, and Chinese food had been gaining support because of the influx of Chinese tourists, but if one international cuisine remained steadfastly popular since the Soviet era, it is none other than that of Georgia.
Formerly called Gruziya by Russia, Georgia was incorporated into the Russian Empire and went under Soviet rule in 1924. Because Russia and Georgia were basically one state throughout the Soviet era, Georgian recipes spread across Russia naturally. Those who got used to Georgian food in their youth  are now considered older generations who crave the same kind of food. After the Soviet collapsed, the Georgian diaspora seeking higher wages in Russia began opening restaurants there. Currently there are reportedly more Georgian restaurants in Russia than the hometown. Considering Central Asian countries and the three Baltics were also members of the old Soviet at one point, why is Georgian food singularly popular in Russia? 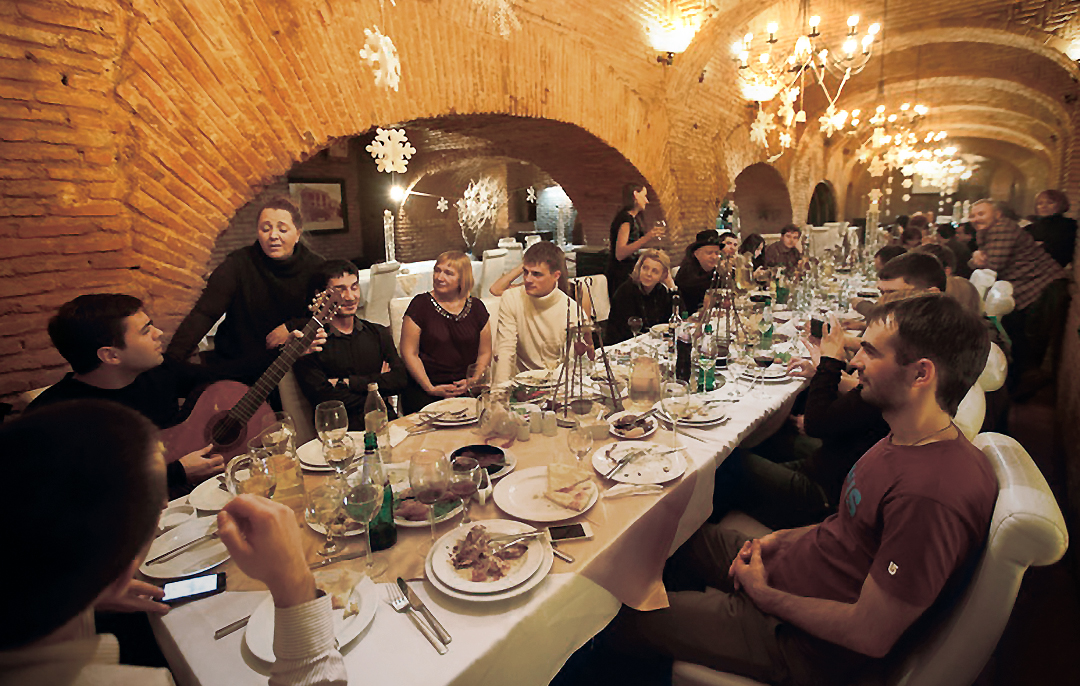 Natural Spices
That is because of the unique flavors of Georgian food. Russian gastronomes say these things about Georgian cuisine: “It is spicy but not too much,” “There’s a great diversity of food,” “Thanks to spices and fresh herbs, Georgian food is appetizing and flavorful,” “It’s hard to imagine not eating marinated cheese, pastry, and roasted meat.” As can be guessed from the evaluations, Georgian food is similar to what we think of as healthy food, and it has rich flavors thanks to the variety of dairy products and spices grown in the mountainous regions. 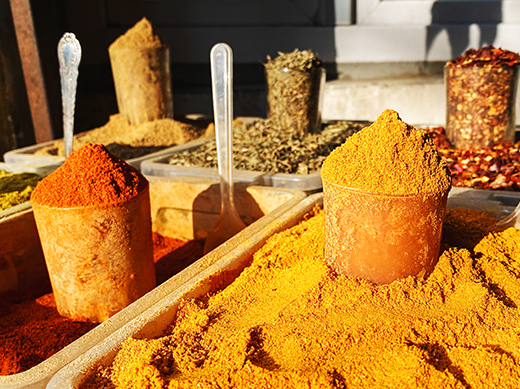 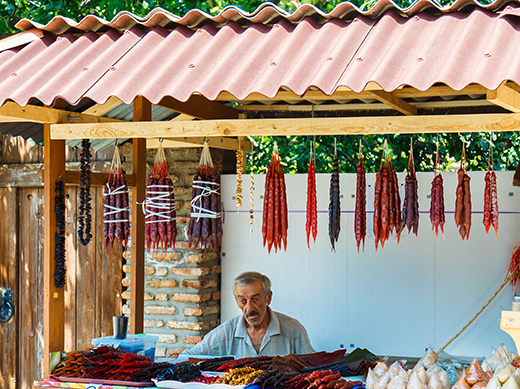 The Georgian cuisine offers a wide selection and uses copious amounts of spices.

A signature Georgian spice is Suneli. People of Georgia have been using numerous kinds of herbs that naturally grow in their land filled with unique mountains, valleys, and meadows for a long time. Meaning ‘fragrant spice’ in Georgian language, suneli is made by grinding dried herbs. The most classic suneli mix contains dill, bay leaf, marjoram, coriander seed, summer savory, fenugreek, basil, celery seed, and saffron. This spice mix is not only great in boosting the flavor and scent, but is also colorful which is an added pleasure for the eye. It is hard to find such a diverse selection of herbs in Russia which is a flat land. Compared to the rather simplistic Russian cuisine which involves meat, potato, salt, and pepper, Georgian food with its diverse spice options and appetizing visuals must have opened a mouthwatering new world on the table for Russians. Moreover, it was relatively affordable considering the high quality of food. There were countless reasons that Russians fell in love with the delicacies from the next-door neighbor. 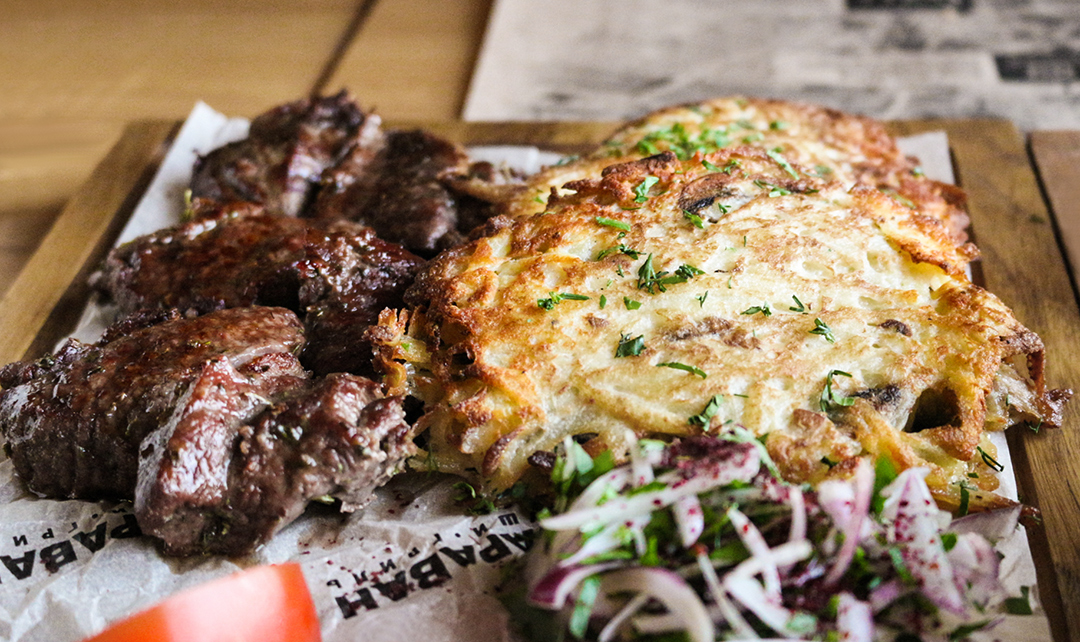 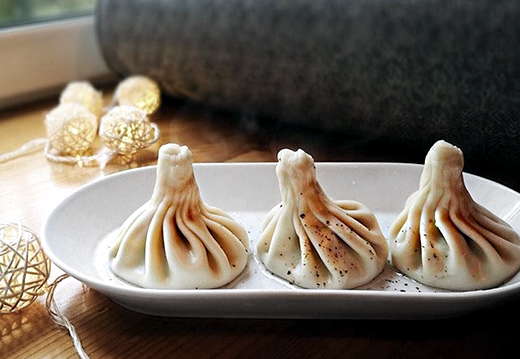 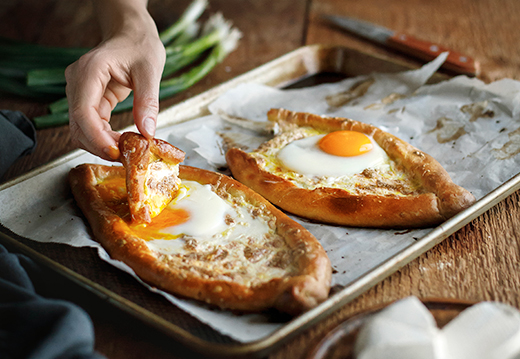 Shashlik, Khinkali, Khachapuri, Kharcho, Satsivi
In Georgia, herbs and crops are cultivated in mountains and valleys while cattle and sheep are put to pasture. People of Georgia mostly combine these two food groups for their meal. The signature dishes are shashlik, khinkali, khachapuri, kharcho, and satsivi, accompanied by freshly-baked pastry, cheese, and wine.
Shashlik, originated from Turkey, is a skewer of grilled cubes of meat that is enjoyed in the Caucasus and Central Asia, as well as Russia. It is synonymous with shish kebab in Turkey. The name shashlik is used across the Russian-speaking nations. In Muslim regions where pork is banned, shashlik is made with lamb. In Christian countries such as Georgia, Armenia, and Russia, pork is the main ingredient of shashlik.
Khinkali is a Georgian-style dumpling. Because of its size similar to Korea’s king-size dumpling, two to three khinkalis would be a sufficient amount for one meal. There is a recommended way to eat this food. The juice from the meat inside the dumpling gets very hot while being steamed, and you can easily burn your mouth if you rush to eat it. First wait two to three minutes, grab it by the top, or kudi, flip it upside down, poke a small hole on the skin, and sip out the savory juice first. That way, you can enjoy the khinkali as it was meant to be.
Khachapuri is similar to cheese pizza. A freshly-baked khachapuri is often recommended as an appetizer. The popular adjarian khachapuri is made by putting butter and egg yolk in the middle of hot pizza bread, which are then mixed on the spot to eat. 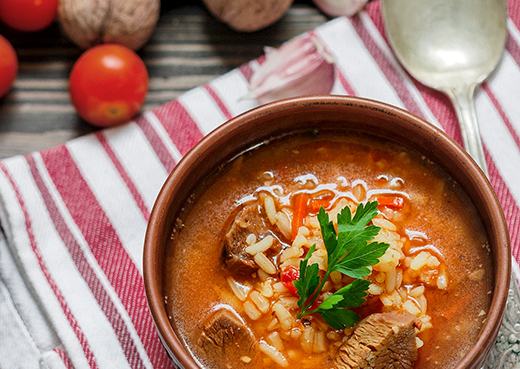 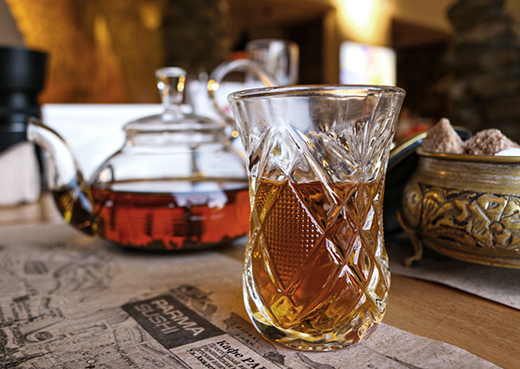 Kharcho is traditionally Georgian soup containing beef or lamb stock seasoned with garlic, suneli, pepper, chili, cinnamon, and ajika(Caucasian spicy sauce), to which lamb chop and rice are added and boiled until the soup becomes thick. With a bit of spicy flavor, it is similar to Korean yukgaejang(spicy meat stew) and recommended for those who are tired of greasy Russian cuisine.
Satsivi can be either a dish or a sauce. To enjoy it as a dish, poultry such as turkey, chicken, and duck is boiled and then oven-baked. Ground walnut, suneli, chopped garlic, julienned cayenne chili, and stir-fried onion are put in the broth and boiled to make a sauce. It’s then poured on top of chopped poultry. Being walnut-based, satsivi is creamy and flavorful.
If you feel bloated during a meal, chabrets, or Georgian thyme tea, can fix you right away. Having a mildly bitter herbal taste, the tea is excellent in reducing greasiness that comes with any meat dishes. You can say in Russian ‘chornyy chay s chabretsom’ to place an order. 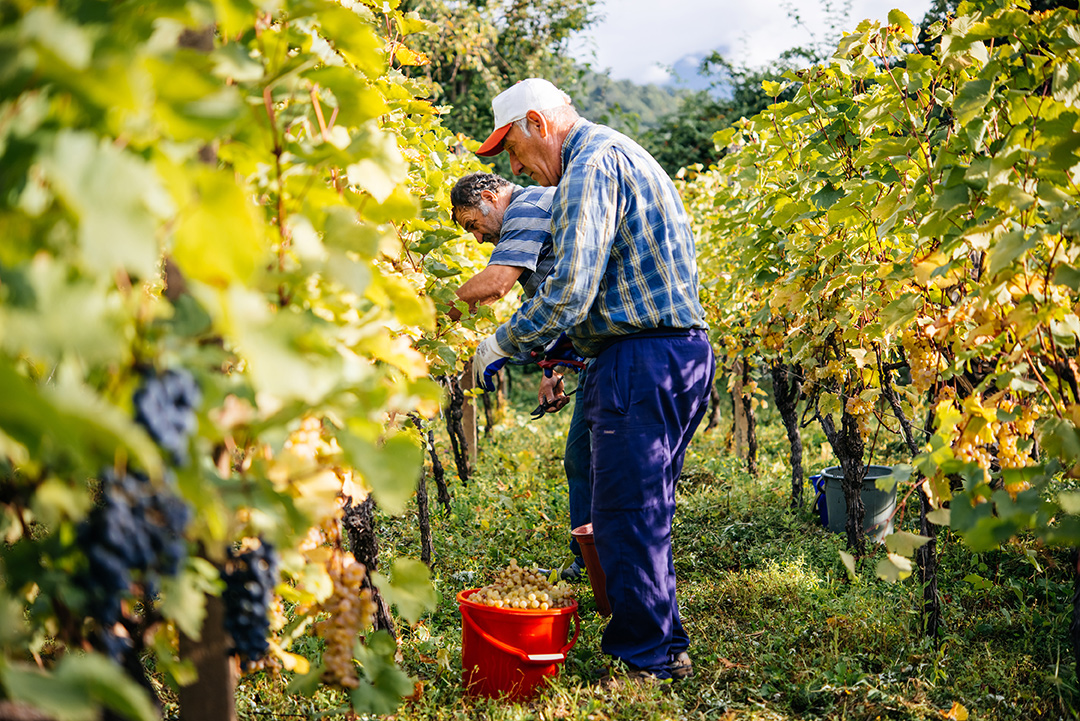 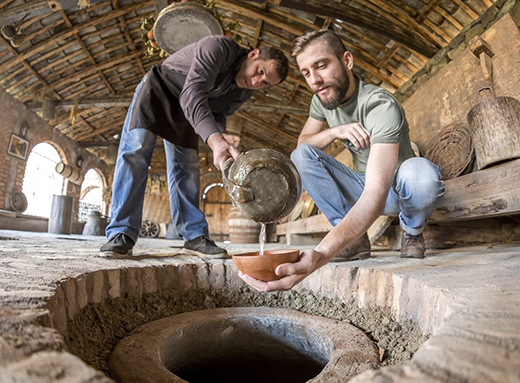 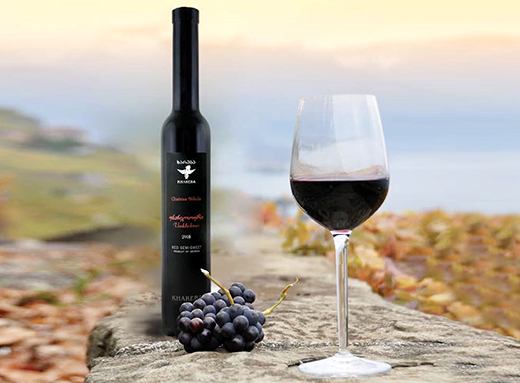 Georgian wines are aged inside a vessel called Qvevri.

World’s First Wine?
It’s now time to discuss Georgian wine. Viticulture and grape farming are part of daily living in Georgia where a large number of wineries exist. In fact, the world’s first wine is believed to have been from Armenia or Georgia. It means Georgians from early on had the pleasure of having meat and wine together. Some 70-percent of the country’s winemaking takes place in Kakheti. Saperavi is the most popular red wine. Rkatsiteli is the white counterpart. Georgian wine is produced using qvevri, a large clay amphora-like vessel in which wine is fermented and stored. The unique method was listed among UNESCO Intangible Cultural Heritage in 2013 along with Korea’s gimjang culture.
Russia’s national poet Pushkin, who was a wine aficionado, wrote to his friend in 1827 while he was under house arrest that he really wanted to visit Kakheti. His wish was fulfilled in 1829, two years after the letter was sent.
Georgian wine became even more famous because of Soviet leader Stalin.The historic figure was actually born in Georgia. He frequently enjoyed Khvanchkara, a red wine from Racha.
The best Georgian wine is Usakhelauri, which means ‘nameless’ in Georgian. This wine is produced in Tsageri, northwestern Georgia, in a very limited amount using the grape of the same name. The wine has a semi-sweet flavor. Only the top-quality grapes harvested in mid-November when the first frost falls are used. Their sugar levels should be over 24 percent. It was Stalin who tasted Usakhelauri wine for the first time in 1934 in the Kremlin, and since then it has maintained the top rank among Georgian wines.
Georgian Restaurants in Moscow 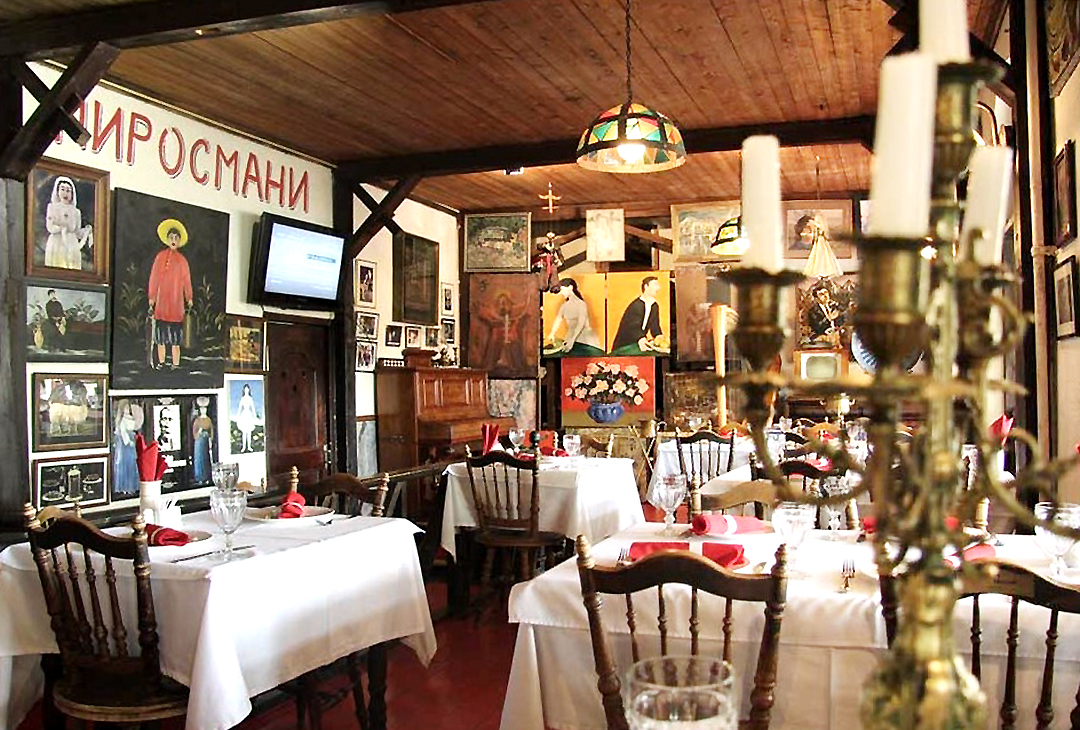 U Pirosmani
The name means ‘To Pirosmani.’ Pirosmani is a contemporary painter born in Georgia and protagonist in ‘A Million of Scarlet Roses’ which is a popular Russian song about a failed love story involving a French actress. Located near a picturesque lake next to Novodevichy Convent, the restaurant offers great views from the balcony.
Address  4, Novodevichy proezd, Moscow
Phone  +7-499-255-7926
Homepage  www.upirosmani.ru 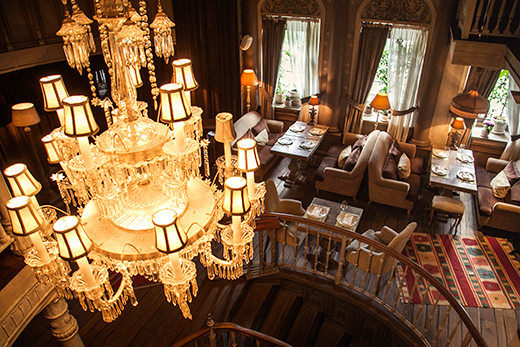 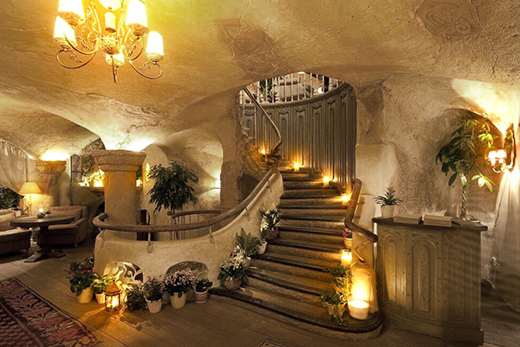 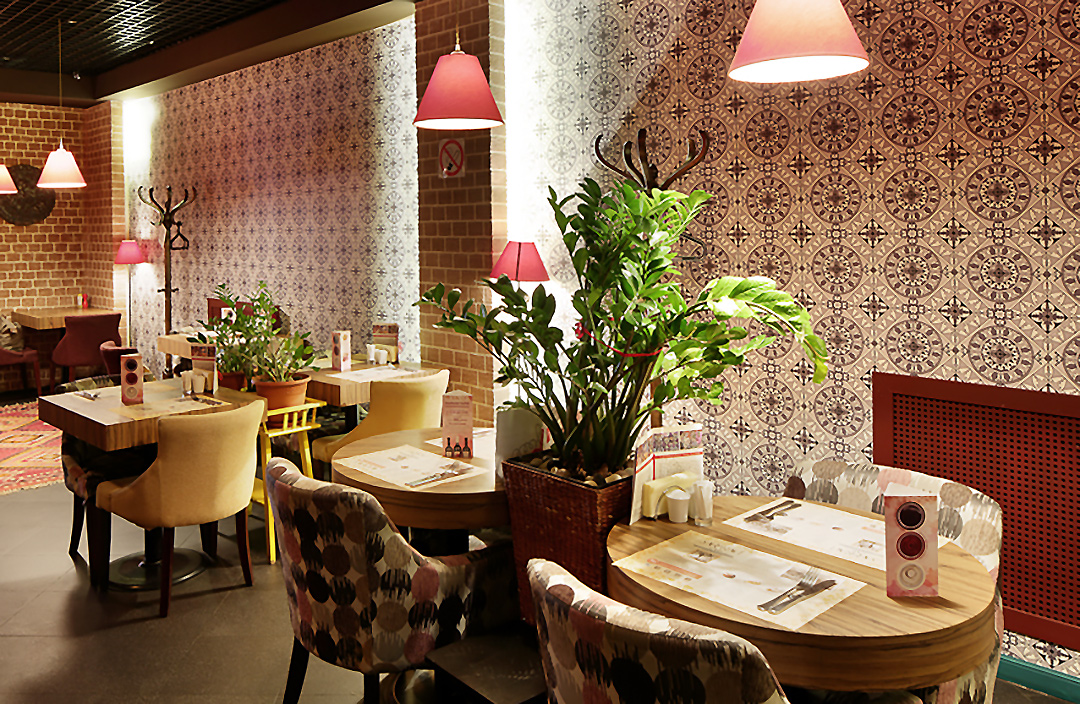 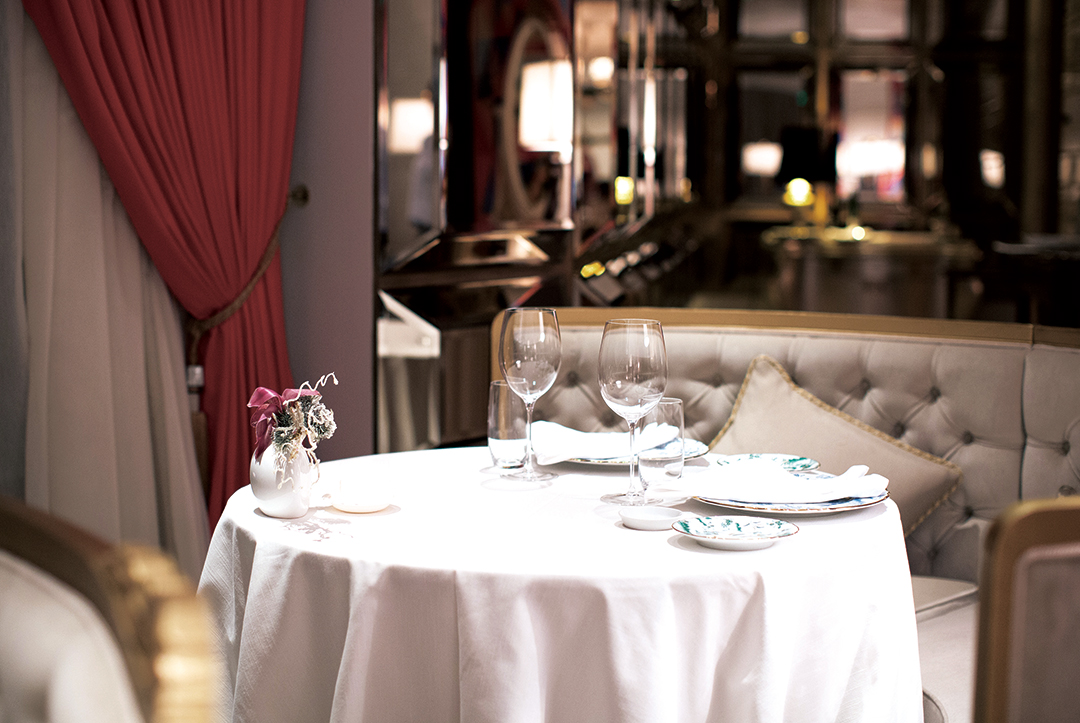 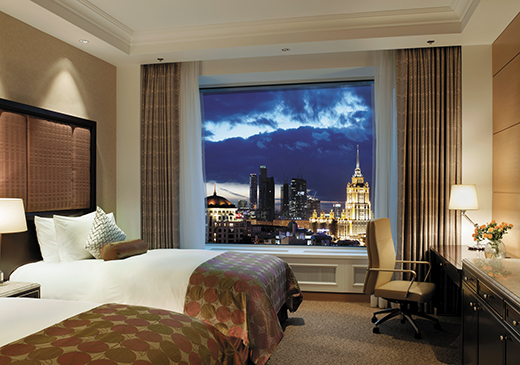 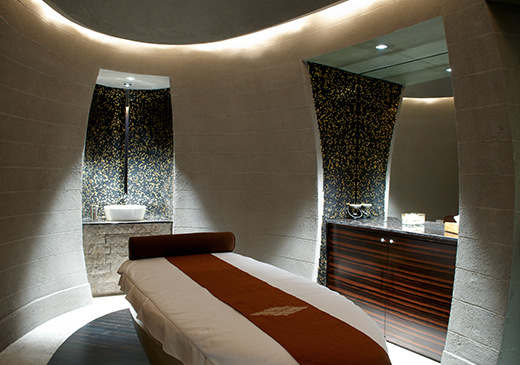 Where to Stay in Moscow: LOTTE HOTEL MOSCOW
As the first overseas chain by LOTTE HOTELS & RESORTS and any Korean hotel brand, LOTTE HOTEL MOSCOW was selected as Russia’s Best City Hotel two years in a row by travel magazine 'Conde Nast Traveler.' Located on New Arbat Avenue, the financial and shopping hub of the capital near the Kremlin and the Bolshoi Theatre, the hotel offers 300 rooms and suites in a 10-story building with four underground levels on a 7,117㎡ lot. It presents diverse epicurean options including ‘OVO by Carlo Cracco’ run by the eponymous, two-Michelin-starred Italian chef and ‘MEGUmi,’ a New York-style Japanese fusion restaurant. Award-winning Mandara Spa and Atrium Garden also provide the ultimate service and hotel experience.