Rice Beer Makku Makgeolli Fascinates New Yorkers
Makku is a brand of canned craft makgeolli presenting a fresh twist on an old Korean alcoholic beverage. Featured as the ‘Next Alcohol Trend to Watch’ by < Forbes >, what is so special about Makku?
From kimchi to gochujang, or red chile paste, Korean food has never grabbed global attention like right now. The popularity of fermented foods including those of Korean origin is continuing to extend beyond New York, across the entire United States. Boosted by this momentum, Korean traditional fermented drink makgeolli is in the spotlight. In particular, ‘Makku’ is getting a lot of press coverage from American media for its modern interpretation of the ancient rice beverage. < Forbes > wrote about Makku in an article titled “The Next Alcohol Trend to Watch,” while food & entertainment magazine < Domino >, < THRILLIST >, and < Food52 > all welcomed the debut of a new drink in the American market. 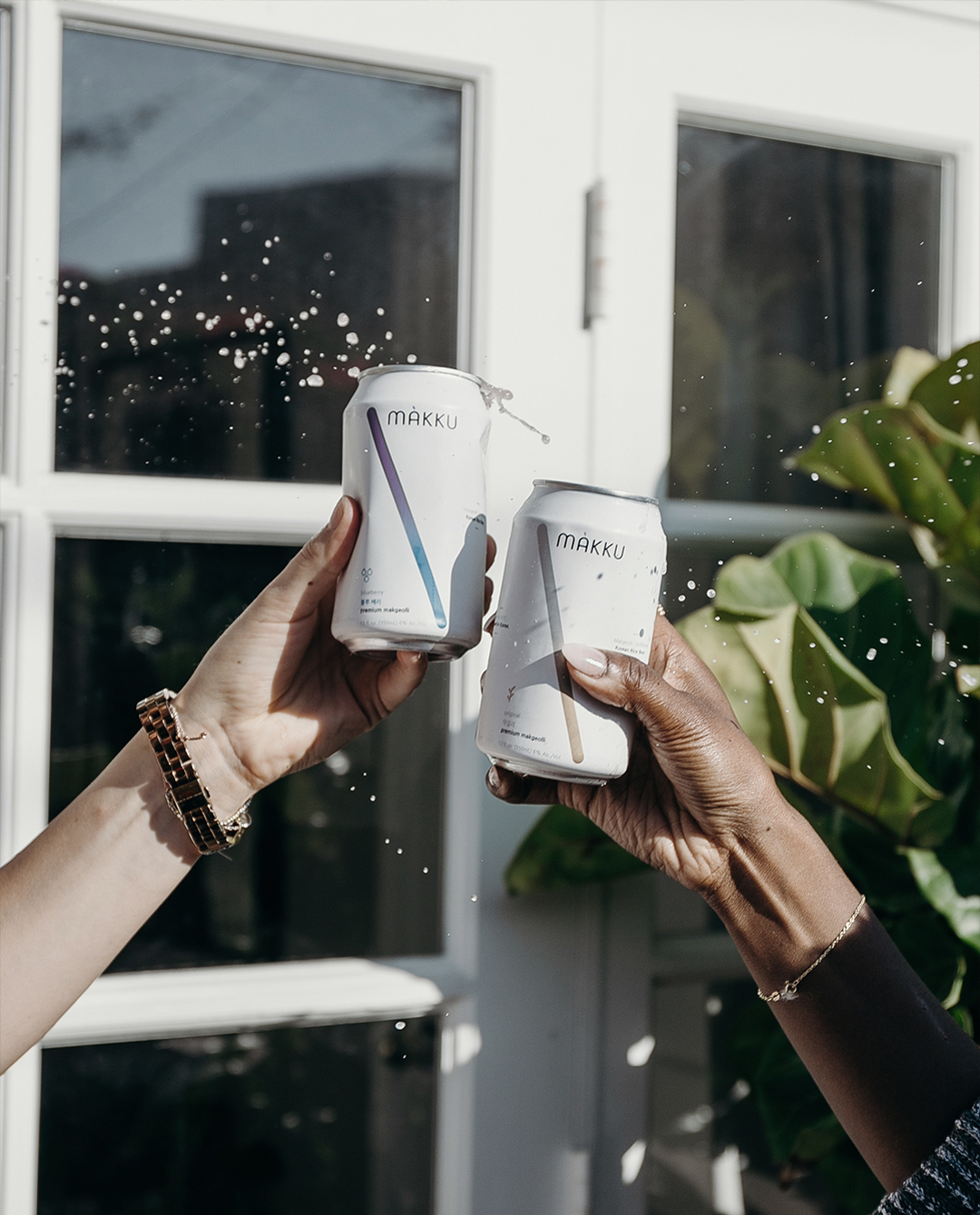 Makku’s makgeolli relies on the traditional method of nuruk fermentation using steamed rice, unlike commercial makgeolli products that have artificial additives such as aspartame and sweeteners. Makku also draws attention with its simple, stylistic cans, setting itself apart from the existing makgeolli brands using plastic bottles. Behind the creation of this contemporary rice beer label is New York-based Korean American Carol Pak. We asked the up-and-coming entrepreneur about the newly-minted category of ‘rice beer’ as well as her Makku story and future plans. 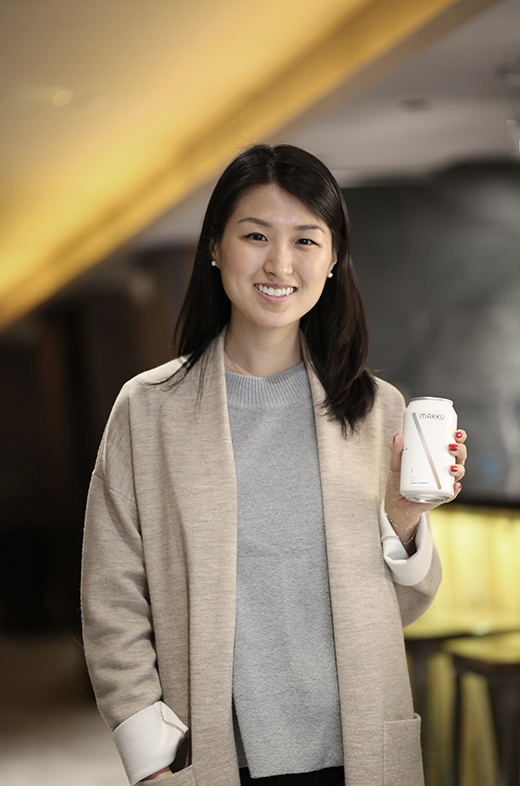 “I wanted to use the traditional method of makgeolli brewing but also appeal to American consumers.”
Carol Pak, Makku founder & CEO
Q. Tell us how you came to create a new style of makgeolli?
A. I studied psychology in college and was on the Law School track because my parents and grandparents were pushing me that way. While preparing for it through various ‘real world’ experiences, I realized I wanted transition to Business, so I got my MBA at Columbia Business School. Upon graduation, I took a job at ZX Ventures (the global growth and innovation group within Anheuser Busch InBev which owns alcoholic beverage brands such as Budweiser).
While I was working in China to lead a new product launch, I became familiar with the different kinds of products and trends in the U.S. market. During that period, I traveled to Korea to visit my family, and was introduced to a few makgeolli bars. I found that the local craft makgeolli brands tasted so much better than the commercial brands available in the U.S., which piqued my interest in makgeolli, and eventually led to me launching Makku.

Q. What made you take interest in the makgeolli business instead of soju or other alcoholic beverages?
A. While many people knew about soju, no one in America knew about makgeolli. I always wondered why soju was so much more popular than makgeolli, when makgeolli tasted better, was easier to drink, and had so much more history behind it. I started sampling makgeolli with my non-Korean, and non-Asian friends, and they seemed more interested in makgeolli. Additionally, there were already other people trying to create modernized, clean soju brands, so I thought I should try makgeolli. 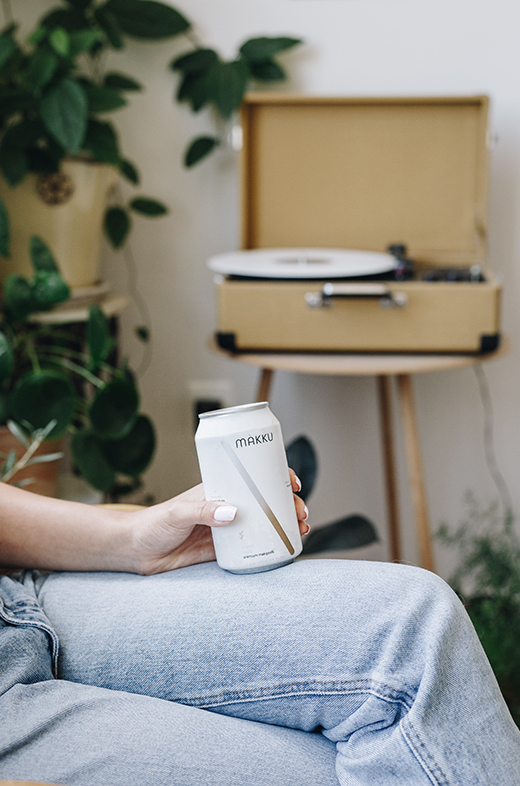 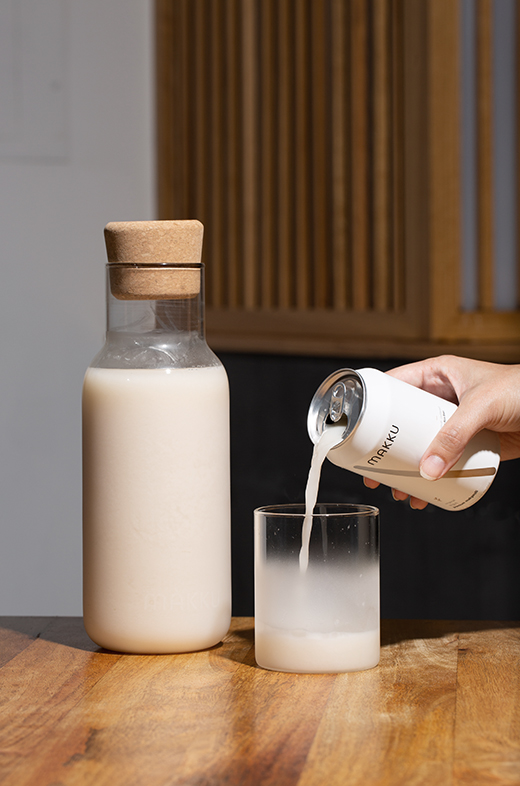 Q. Makgeolli is usually referred to as ‘rice wine.’ Makku, however, is introduced as ‘rice beer.’
A. Personally I think makgeolli resembles beer in more ways than wine. Someday, I hope Makku can grow to become an alternative for beer. Currently, commercial makgeolli products are sold in a PET bottle under the category of ‘Makgeolli.’ Makku, on the other hand, is registered with the U.S. Alcohol and Tobacco Tax and Trade Bureau as ‘rice beer’ and is sold in a 12oz can like beer.

Q. I heard that you make Makku in Gapyeong, Korea, and import the products into America. Why did you decide to make them in Korea?
A. We make Makku in Gapyeong. At first, we tried to keep the product local to New York, but we quickly realized the equipment, ingredients, and expertise for makgeolli are unrivaled in Korea. To realize our vision to distribute makgeolli widely, we needed a very technical producer with large scale, which we could only find in Korea. Additionally, Korea is a great location to export from, if we are trying to enter other markets outside of the U.S. So Makku from our Gapyeong brewery is imported into America and delivered to the consumer in a refrigerated container on the same day.

Q. It is rather difficult to have consistent results with nuruk fermentation. Did you have any challenges while working on Makku?
A. When we were producing Makku in the states, every part of the process was so difficult. Now that we are working with one of the best makgeolli breweries in Korea who have been around for 20 years, they have so much expertise, and make the process so easy. Nuruk is spontaneously made, meaning that each batch would differ, resulting in inconsistent makgeolli. We use a lab to ensure there is consistency between the microorganisms in our nuruk. 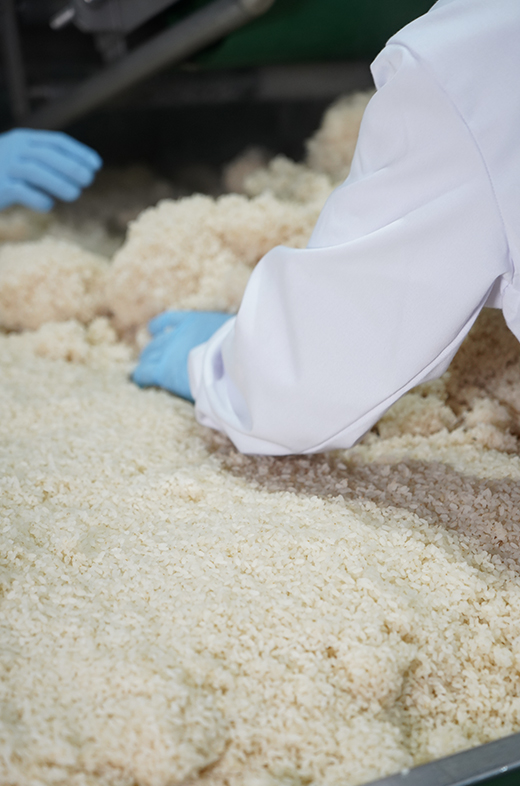 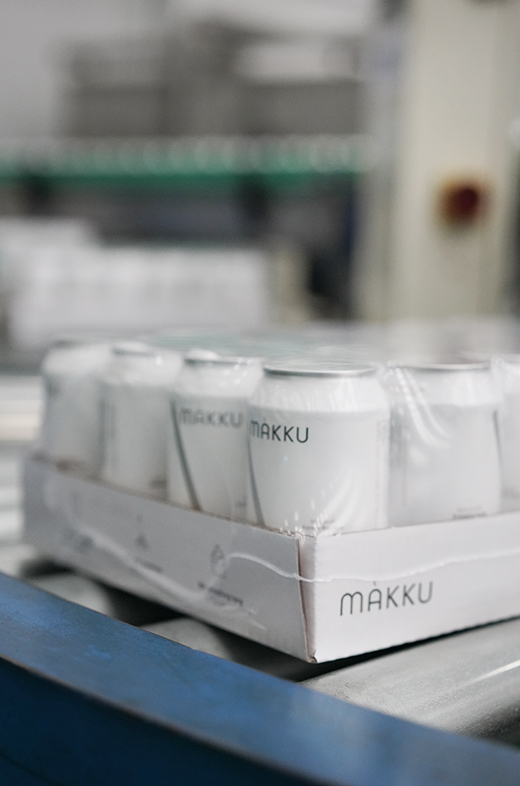 Q. Why did you choose a canned makgeolli for your business?
A. I wanted my makgeolli to look different from the traditional makgeolli bottle available throughout Korea and the U.S. I also wanted to use the traditional method of makgeolli brewing but also appeal to American consumers. My previous job at the alcoholic beverage company was a big help. Based on my experience, I knew that the canned format was exploding in the U.S., and that many younger consumers preferred the convenience and easiness of a can.

Q. Is that why your can has such a chic design?
A. As for the design, I hired an agency that had a minimal, clean aesthetic that aligned with what I wanted Makku to look like and gave them a few key points to work from. The container should modernize a traditional alcoholic drink and deliver the message that the drink must be turned upside down to shake up the rice sediments, which is key to makgeolli’s scent and flavor. The design should also have a strong visual element to draw attention as, with a new product, the label is all you have for a first impression. I also wanted the product packaging to look classy and to hint at the content. The current can design is the combination of these ideas. 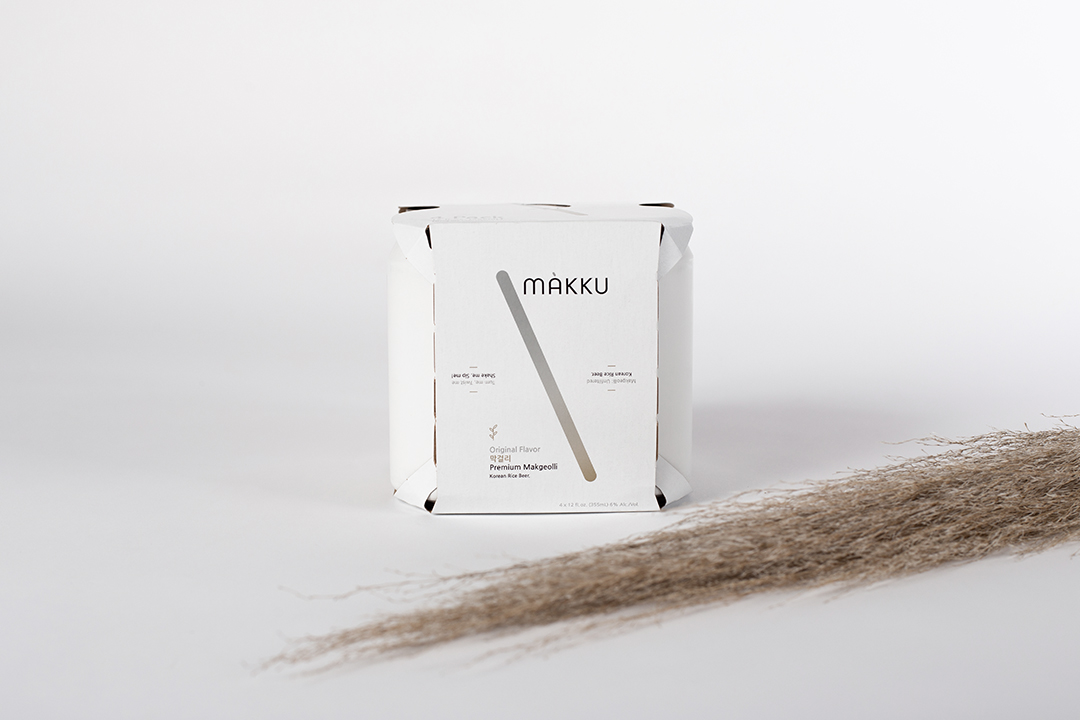 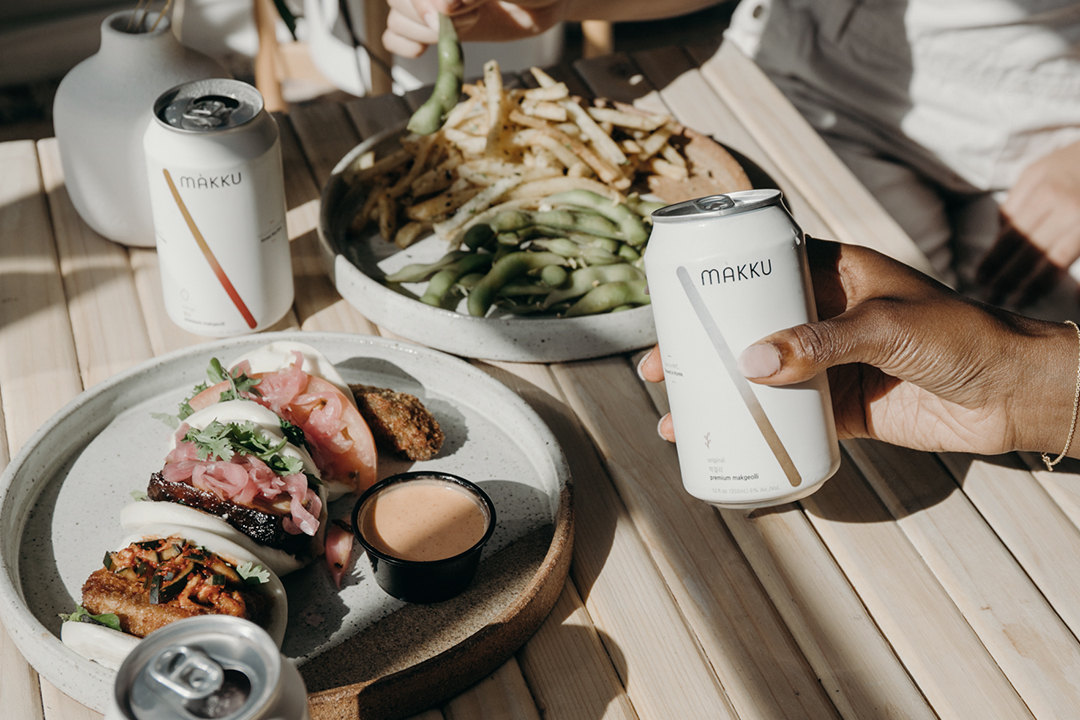 Q. Did you always have interest in food and beverage before launching the company?
A. I don't think I actively thought I was interested in food and beverage, but my mom is a great cook, and my sister went to culinary school, and our whole family regularly enjoys drinking with our meals. Living in Queens and Manhattan, I was always exposed to very ethnic foods, and fine dining establishments. I spend a lot of time researching new restaurants, and trying new food and beverage products. I realized in Business School, that maybe I wanted to work with Food and Beverage, but I wasn't sure exactly how.

Q. What's the best way to enjoy Makku?
A. Makku is best enjoyed on its own, cold and poured into a glass. It can be enjoyed right out of the can but you must gently shake the can before opening. Otherwise, pouring Makku into a glass allows the rice sediment to be evenly distributed throughout the drink. Most importantly, I want people to experience the unique flavor of fermented rice beer, similar to that of frozen yogurt. Makgeolli traditionally pairs well with foods that are spicy, fatty or oily such as kimchi, tempura, spicy pork or pork belly, fried chicken and jeon. However, we believe it really goes well with anything - just like beer or wine.

Q. Along with the Original flavor, Makku has Mango and Blueberry flavors. Which one is your favorite?
A. I learned that it’s best to introduce new things with some level of familiarity, so I figured I should add two flavors that are common and widely accepted in America on top of the original rice flavor. I wanted a citrus flavor and a berry flavor, but none of the citrus flavors I tested were working out, so I went with mango, since I know it’s a crowd pleaser. We are now working on new citrus flavors and are aiming to launch a new flavor early next year.
I like different flavors depending on my mood and time of day, but I guess I always try to encourage people to try the original flavor, because I want people to know what makgeolli is supposed to taste like. 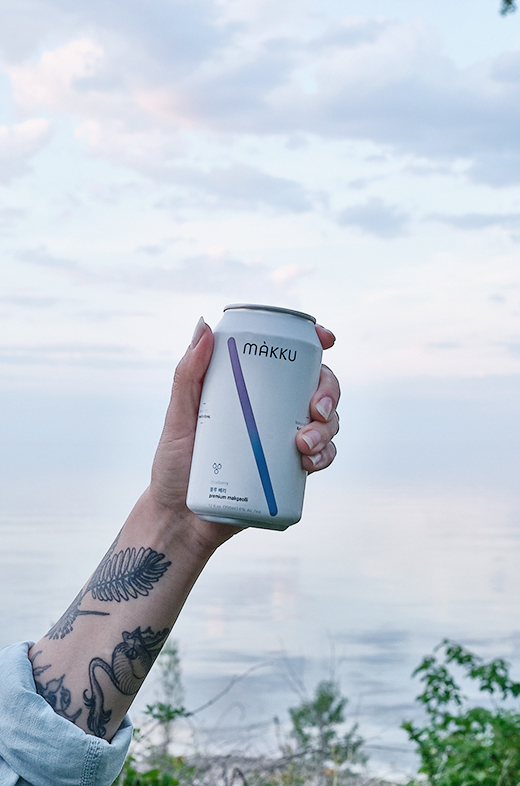 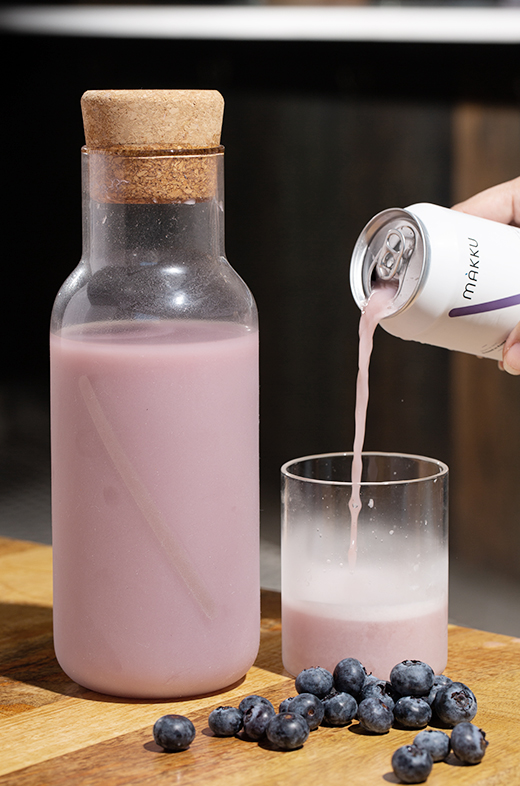 Q. Various local media have covered Makku.
A. We had very limited resources in the beginning, so we did not do any marketing. I was a one-person team, and I was selling Makku store by store, and I remember being so happy when I reached 10 stores. Thankfully, we have been able to grow through a lot of word of mouth recommendations, and loyal followers sharing about us online and off-line with their friends and family. We eventually reached a point where we found a beer distributor in New York, and have been growing with them. We have also expanded to 10 other distributors outside of New York. We hope we will be able to do many events, samplings and partnerships in the future.

Q. What are your long term plans for Makku?
A. We are looking to increase distribution in the U.S., as well as internationally. We are especially hoping to expand to Canada and Asia. We are also looking to increase our product line - new flavors, dryer styles, premium styles, and different ranges of alcohol. Right now we define Makku as unfiltered rice beer, but ultimately we hope ‘makgeolli’ itself can be one whole category.