Lotus Flower Tea in Hanoi, and Its Mystical Morning Dews
“Tea cup is the beginning of the story.” - Vietnamese proverb
The Vietnamese people have a special connection with teas. Whether it’s a wedding or for a holiday, gatherings of people are often accompanied by tea. A warm cup of tea can be a social lubricant and it can help forge relationships.
Vietnam is one of the world’s largest producers and consumers of teas. The country is known to have been growing teas for over 2,000 years. Tra Xanh (green tea) from Thai Nguyen, Shan Tuyet from Ha Giang, Tra Cung Dinh Hue from Hue and oolong tea from Boa Loc are among the most beloved local staples. Tea lovers from around the world have also taken notice.
Hanoi, the Vietnamese capital with a thousand years of history, is home to a special type of tea that brings more class and elegance to the Vietnamese tea culture. Meet lotus tea, the type of scented tea that requires a great deal of handiwork to brew. 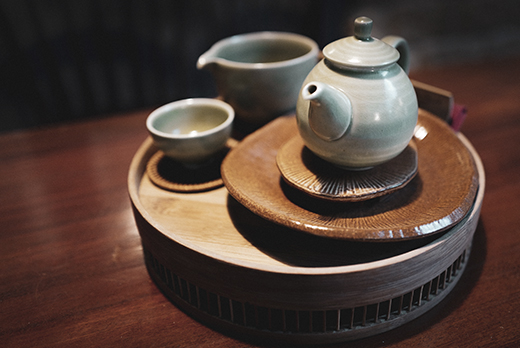 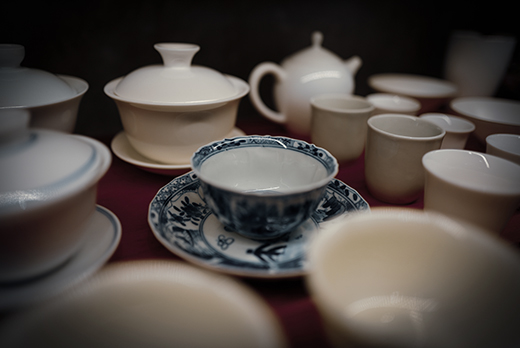 Vietnam is home to many different forms of tea culture. © Jeon Haein

The lotus flower has long been considered sacred, transcendent of borders and religions. In Buddhism, it signals the birth of Buddha. In India, lotus flowers are dedicated to different gods. In ancient China, the lotus flower was described as the one that belongs to a pure, noble man. Those who practiced yoga or Zen also had an affinity for the lotus flower. Even when it grows out of mud, the lotus flower never loses its striking beauty. 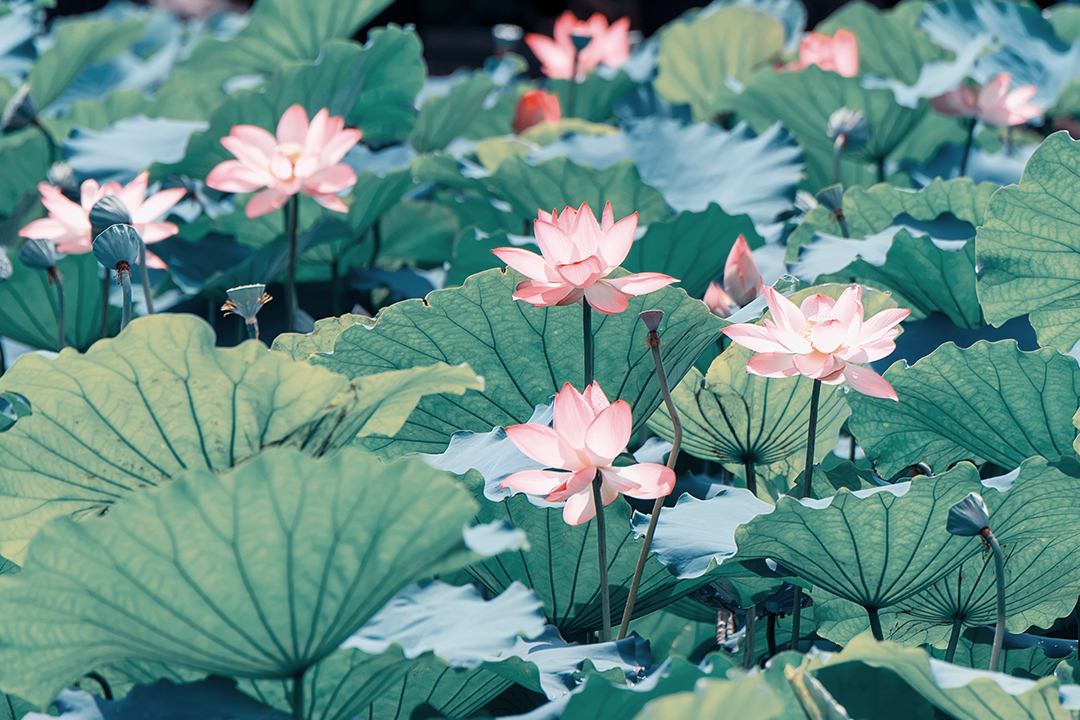 Lotus flowers in full bloom at West Lake in Hanoi

People in Vietnam love their flowers so much that they’re a huge part of their lives. And the lotus flower is their favorite. It’s the national flower of Vietnam, and people there say the flower best represents what the country stands for.
West Lake, the largest freshwater lake of Hanoi, is famous for some 100 lotus flowers, their pink petals producing mystical fragrances. When lotus flowers are in full bloom in the summer, West Lake attracts a huge number of visitors.
The Vietnamese make use of every part of the lotus flower, from its stems and seeds to petals and pollen, for food and medicine. The lotus flower tea is notoriously difficult to make. It has long been the favorite tea of the high-ranking bureaucrats and the upper class, and the signature, high-end tea of Hanoi. 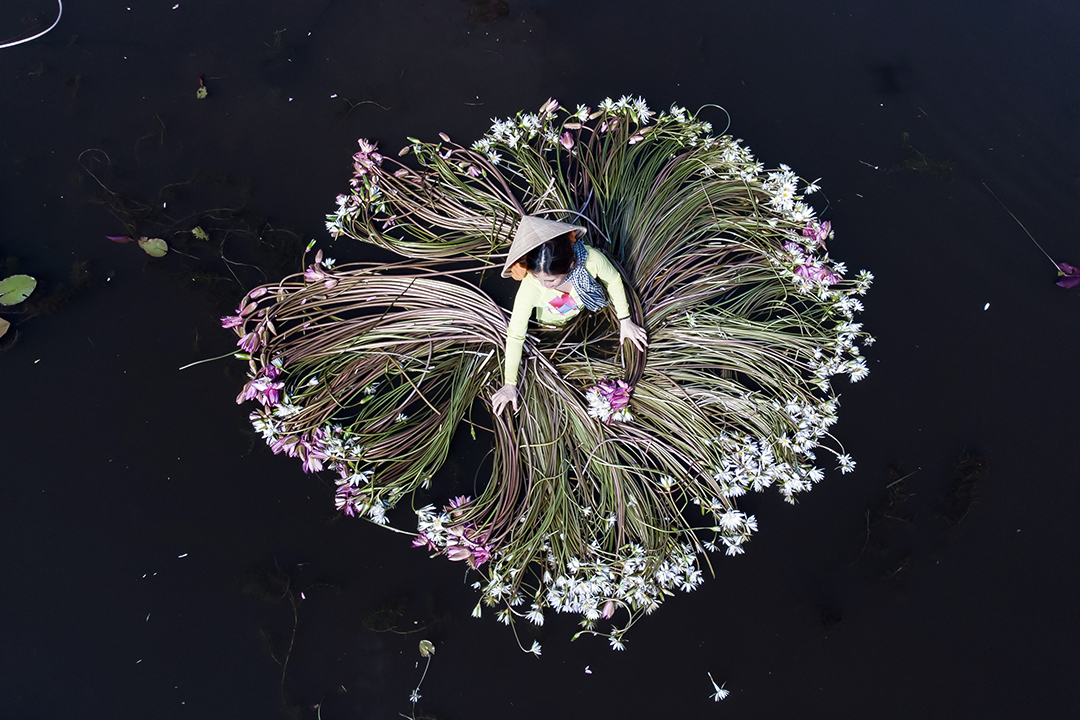 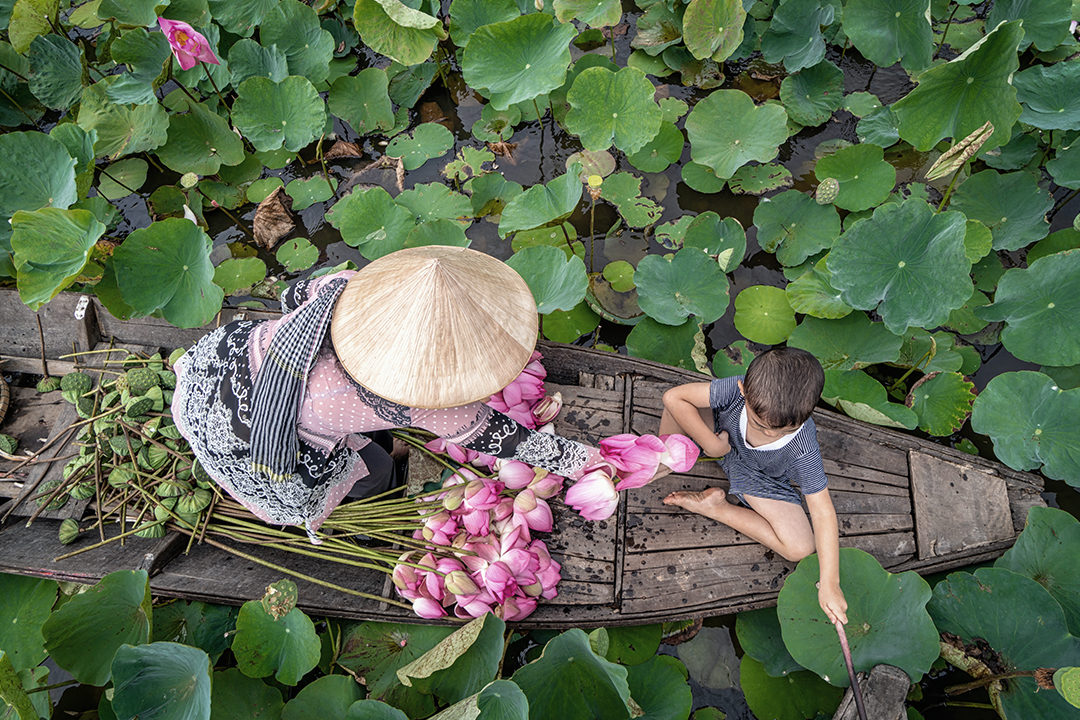 Lotus flowers are picked before the day breaks.

How Lotus Flowers on Lake End Up in Your Tea Cup
The long journey from the lake to the tea cup starts with picking up the lotus flower. The best time to do so is around 5 a.m., just before the day breaks. This is also when lotus flowers, not yet in full bloom, are covered in morning dews and exude the strongest fragrance. Once you pick them, you must remove the anther right away, and do it quickly so that you won’t lose their scent. The anther should then be mixed with quality green tea leaves picked specially for this occasion. That way, tea leaves will acquire the scent of lotus flowers. The green tea leaves will be wet and dried off seven times, turning into lotus flower tea leaves in the process. Place these leaves inside the lotus flower and wrap them up carefully. You’ll end up with lotus tea with layers of floral scent.
You need 1,400 lotus flowers to produce 1kg worth of lotus flower tea. Every step requires such meticulous and intensive work that it used to be reserved only for the richest of the rich. Even today, it’s more expensive than average teas, but it has become more accessible for the general population. It’s a proud part of Hanoi’s cultural heritage. 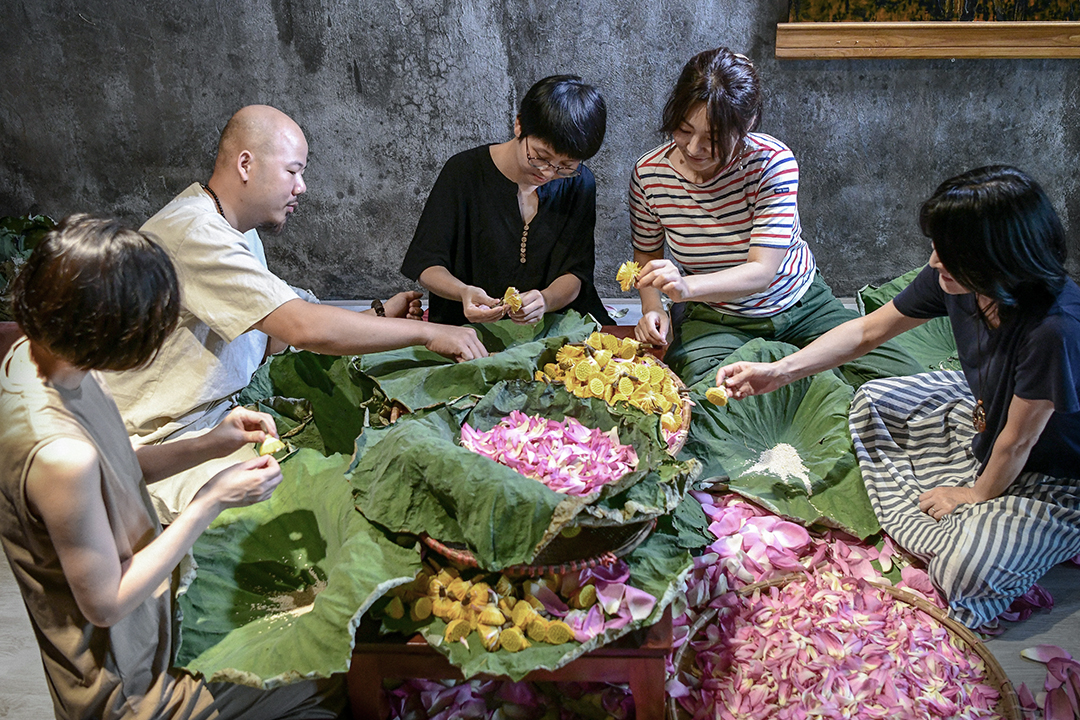 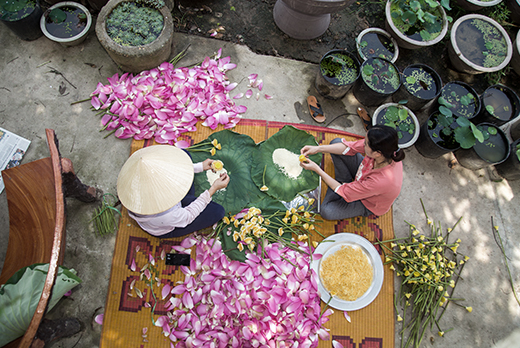 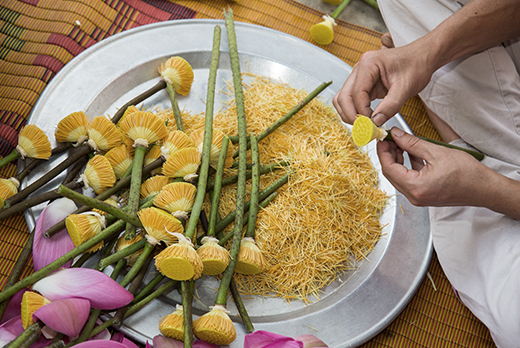 Removing anther from the lotus flower is an important step.

Hien Minh Tea House, Serving High-Quality Lotus Flower Tea
In the middle of the bustling Hanoi, a modest shop stands on a small alley that’s tucked in between busy streets. Follow the soft light coming out of the shop, and you will discover a cozy tea room that’s in stark contrast to the raucous scene on the outside.
“I hope people that come here will enjoy some quiet, peaceful time with a warm cup of tea, and forget about the chaotic urban life,” say Nguyen Viet Hung and Hai Yen, the couple who run Hien Minh Tea House, with heartwarming smiles. They give off so much calm and warmth that they come across as healers.
The two won the 2016 Vietnam Tea Master Cup contest, and opened Hien Minh Tea House in 2016 to preserve and promote traditional Vietnamese teas. They didn’t have much of capital or managerial knowhow at the start. They only had their passion for teas to lean on, and this tea house, within just a few years, developed into the ultimate destination in Hanoi for high-end teas. The couple can be described as many different things. They’re tea artists who promote philosophies and ideologies through teas; they’re ascetics who meditate using teas; they’re also tea farmers; and they’re tea artisans who serve high-quality teas. 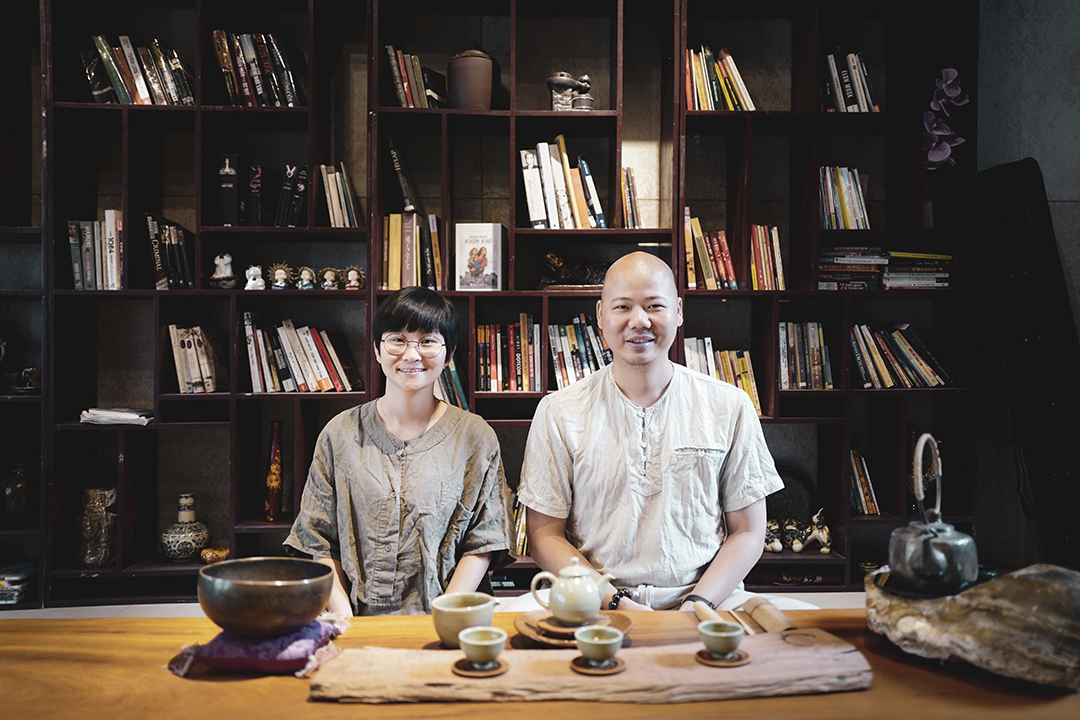 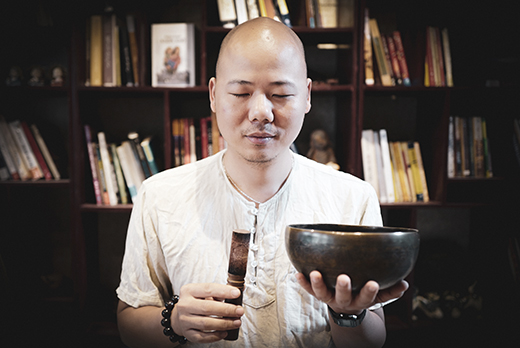 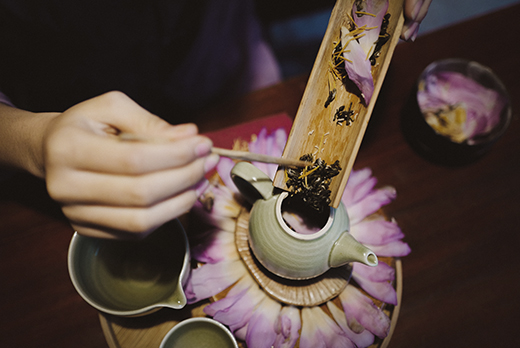 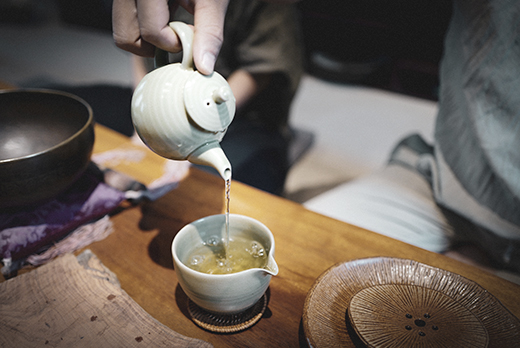 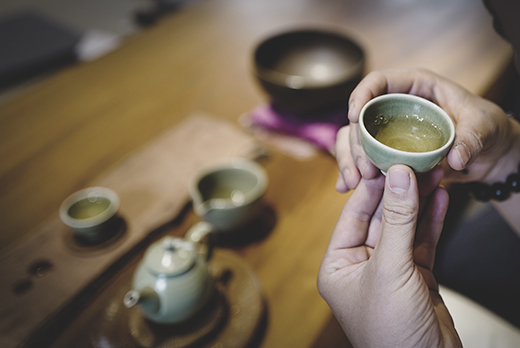 How to Best Enjoy the Lotus Flower Tea at Hien Minh Tea House
1. When the tea artisan rings the singing bowl, close your eyes, feel the vibration and wake your senses.
2. Warm the tea cup and heat up dried tea leaves without water. It will bring out the scent dormant in those leaves.
3. Pour boiling water into the cup and cool it down to 80℃. It’s the best temperature at which to drink teas.
4. Once the water cools to the right temperature, pour it over tea leaves and brew them for 30 to 60 seconds. The longer you brew them, the deeper and stronger the taste becomes.
5. Take one sip, hold the tea inside your mouth and savor the scent before swallowing it.
6. Brew the leaves again for more depth to the taste.
There’s subtle beauty to the lotus flower tea. The delicate scent of the lotus flower goes well with the green tea fragrance. The initial taste may be a bit bitter but once you swallow the tea, you will be left with a sweet aftertaste. It also leaves a refreshing feeling inside your mouth and warms the rest of your body. In addition to waking your senses, the tea will open your heart.
“When we make teas, we enjoy the scent from the leaves. And once you drink that tea, the scent comes into your body,” Hung and Yen said. “By drinking teas, we get to have a closer look at our own inside. This fits well with the practice of yoga and Buddhist philosophy that stresses the importance of spiritual world.” 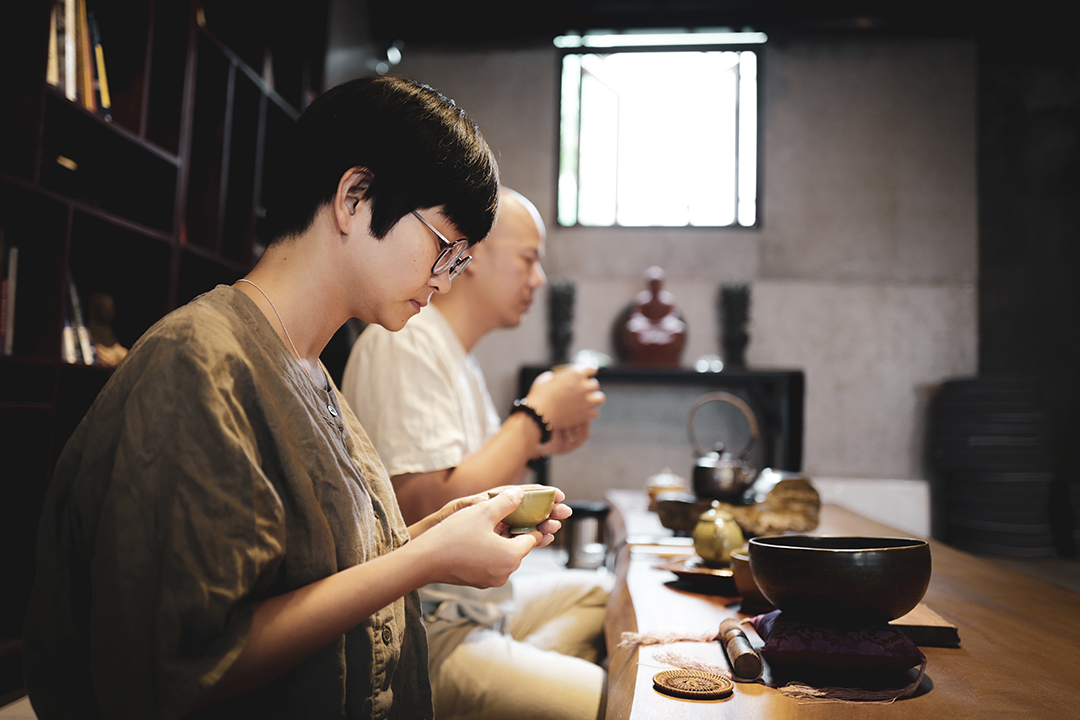 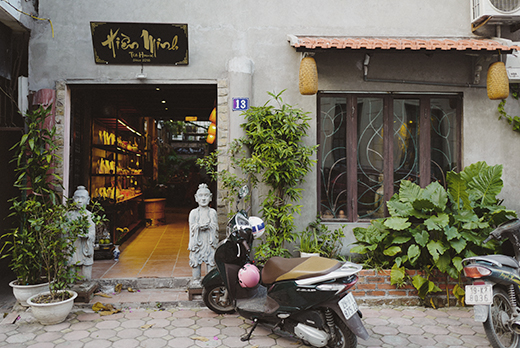 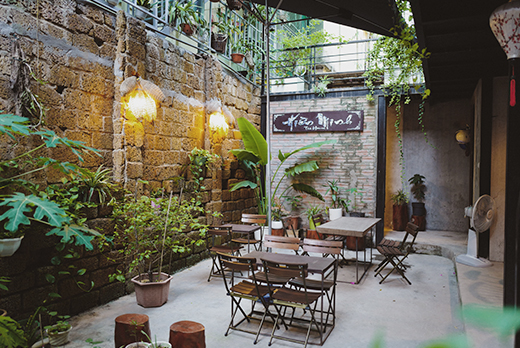 "We enjoy the scent that comes from the tea when we brew it. And once we drink the tea, the scent comes into our body. This falls in line with the yoga practice and Buddhist philosophy that stresses the importance of spirituality."
Hien Minh Tea House strives to showcase high-quality Vietnamese teas to the rest of the world. Hung and Yen, with their strong conviction in and unwavering love for teas, serve tea lovers from all around the world. And during the summer, with lotus flowers in full bloom, they also run classes on making lotus flower teas.
Hien Minh Tea House
Address No. 13 Ngo Tat To, Van Mieu, Dong Da, Hanoi
Phone +84-93-625-1122
Website hienminhtea.com 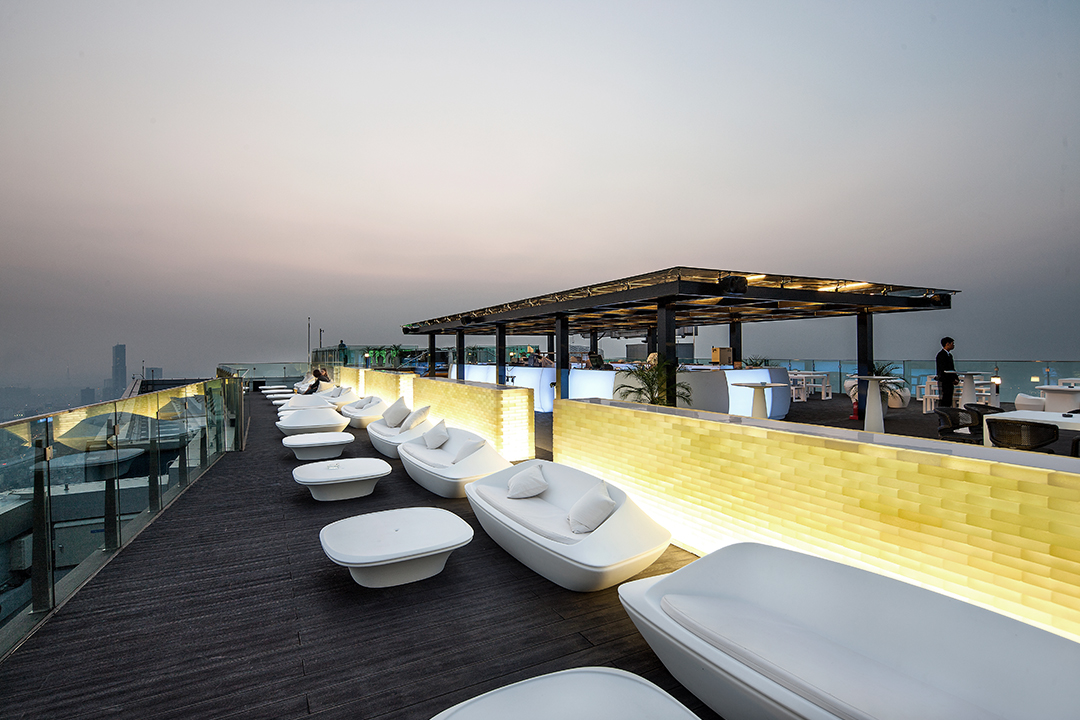 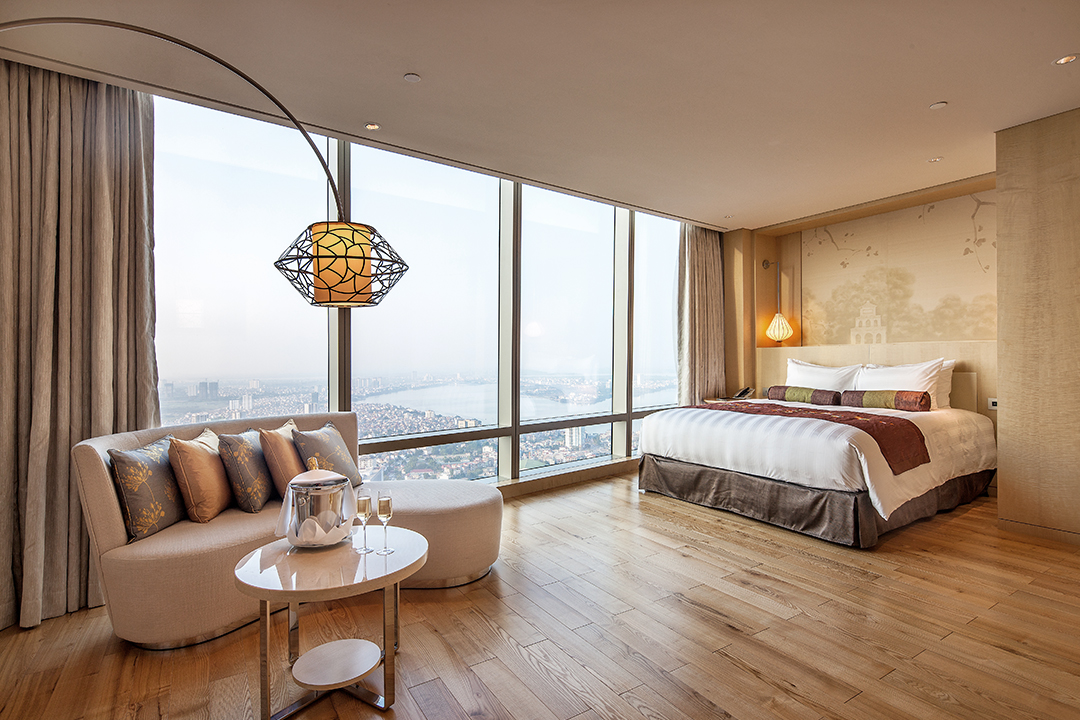 Where to Stay in Hanoi: LOTTE HOTEL HANOI
LOTTE HOTEL Hanoi is housed in the upper part of the 65-story LOTTE CENTER Hanoi, a new landmark in the Vietnamese capital. It offers a spectacular view of the entire Hanoi, and the guest rooms were inspired by the traditional Vietnamese patterns in their interior design. ‘Top of Hanoi,’ a rooftop bar with a view of the Hanoi skyline, and ‘Evian@Spa,’ a perfect place to relax your mind and body, are among the facilities that make the hotel a popular choice among international travelers.