Tastes of Busan, Found in Alleys
Busan has numerous alleys, and they will beckon you with all sorts of delicacies.
During the Korean War, many people went south and settled in Busan. The city is surrounded by mountains, and settlements by refugees were formed along different paths to mountains. Those small alleys and villages are connected by steps on hills.
While alleys going upward led to formation of villages, paths that connected towns below helped build markets. Located by the ocean, Busan has a well-developed port and a major seafood market such as Jagalchi Market. The influx of refugees during the war also saw the rise of trading of goods. Those places were full of labor workers, too, and they needed places to eat. This explains why Busan has so many ‘food alleys’ with multiple restaurants offering much the same food.
Those food alleys were formed near commercial bases of Busan: areas with tradable goods, seaside locations or places with active livestock trading. Lately, districts have been trying to promote local economy by creating new alleys under different themes. Though the exact figure isn’t available, Busan is known to be home to 41 food-themed alleys.
Some of the better-known places are Minrak-dong Raw Fish Alley, Haeundae Beef Rice Soup Alley, Choryang Pork Ribs Alley, Dongnae Pajeon Alley and Gijang Grilled Eel Alley. There are others that won’t immediately ring the bell. It comes as a pleasant surprise that there are so many options to choose from in Busan when it comes to local delicacies on streets.
We toured four alleys with unique history and back stories.
Gijang Yeonhwa-ri Haenyeo Village 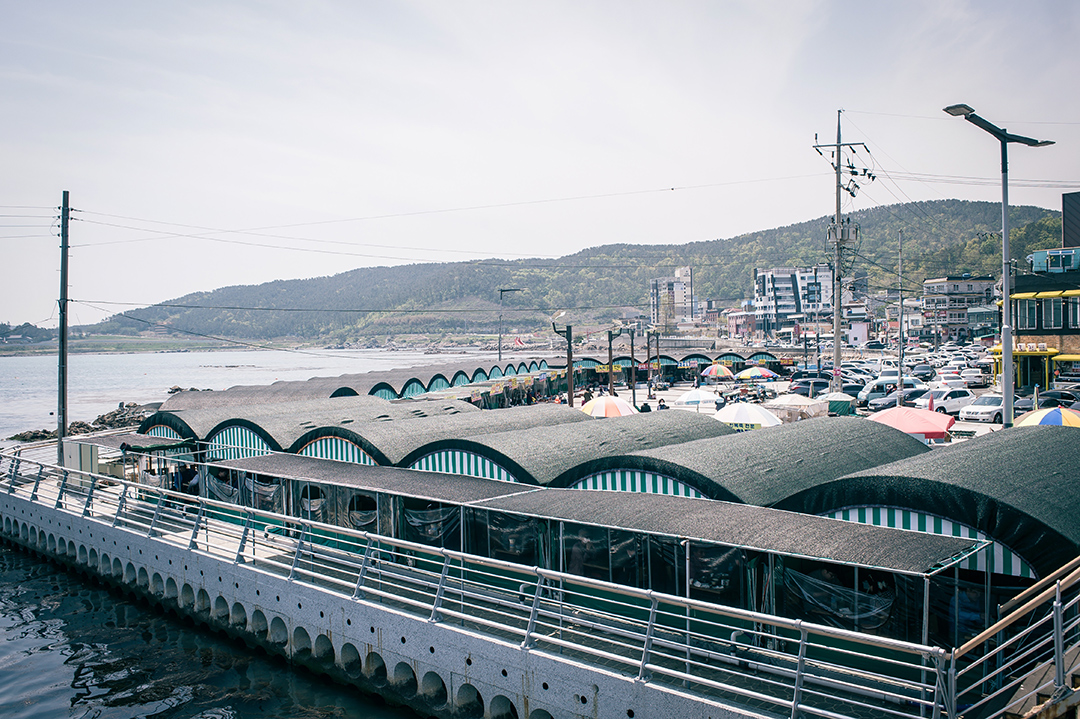 Busan, too, has haenyeo (female divers), just like Jeju. Sea harvesting by haenyeo in seaside towns such as Busan and Pohang is part of our traditional culture. Haenyeo in Busan may not be as organized as Jeju, but they still have their own communities in small ports or tourist spots, where they harvest and sell seafood. That is, they run their own restaurants. About 840 women divers are registered in Busan, with 550 of them based in Gijang-gun. 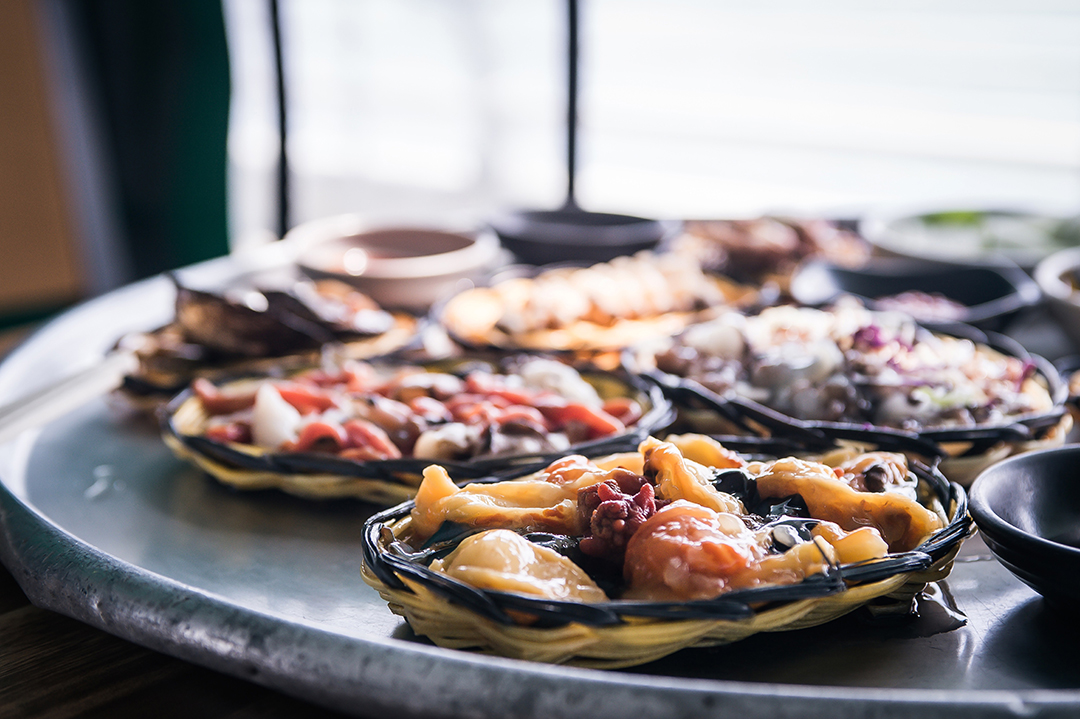 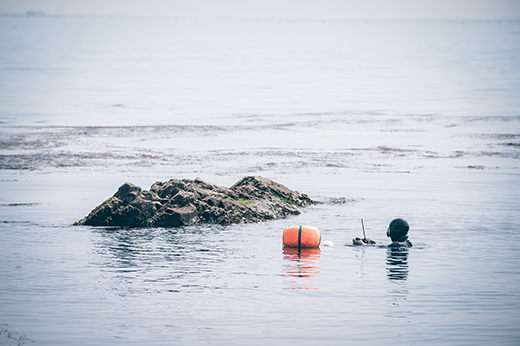 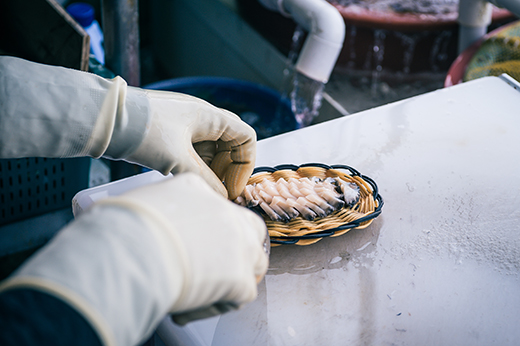 The Haenyeo Village in Yeonhwa-ri is best known for freshly-picked seafood and abalone porridge. Vendors are lined up along the ocean by the Yeonhwa Port. Those carts sell much the same stuff, and so you just have to pick a spot that gives you the best view of the ocean. Seafood platter is the go-to dish there. Raw octopus, abalone, clam, sea cucumber and conch are prepared on order. Choose small, medium or large, depending on the size of your party. The small platter starts at 30,000 won, and the price jumps by 10,000 won from there. Abalone porridge is another popular staple. Before the COVID-19 pandemic, Japanese tourists often made the Haenyeo Village their must-stop destination, capping off their visit with abalone porridge.
Back in the days, these vendors had no power. Most of them still don’t have proper lighting. They close down after sunset, and they draw big lunch crowds. And many of these vendors don’t accept credit cards, so have some cash handy. For dinner, you can always go to proper restaurants behind these carts. They do accept cards. Though they fall on the expensive side, restaurants are more convenient. 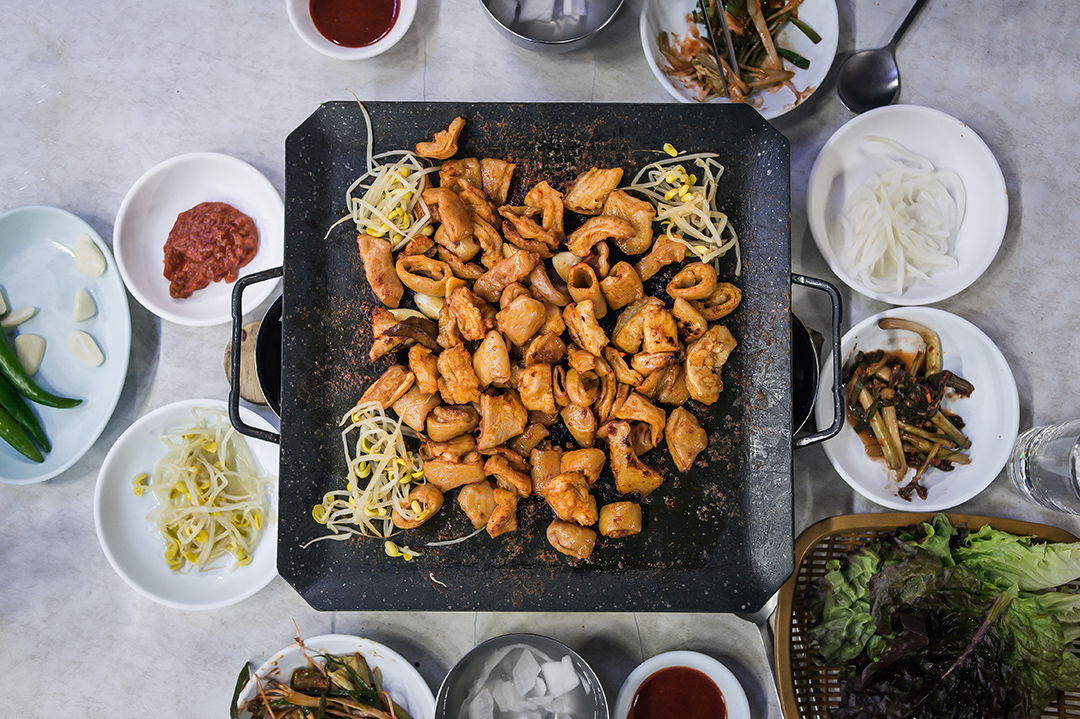 All across Busan, you’ll run into gopchang (beef or pork intestines) restaurants bearing the name of Munhyeon-dong, a neighborhood famous for that dish. Munhyeon-dong Gopchang Alley is located on the way to Nam-gu Office from Seomyeon, the heart of Busan.
Munhyeon had thriving traditional markets and livestock markets from the Japanese colonial period. Back then, people made canned beef and pork and supplied them to battlefields in Manchuria, among others. Whatever was left after making those cans was sent to nearby markets. And as more and more people shopped at those markets, restaurants serving them began popping up. They mixed leftover meat from slaughterhouse with byproducts from canned goods, and pork intestines were especially popular. The area used to be the domain of the locals, but the success of the film put it on the map for others, too. Chilsung Sikdang and the alley appeared in the film, which was set in Busan. There are only about 20 or so diners left today, but during its heyday, the alley even hosted a gopchang festival. 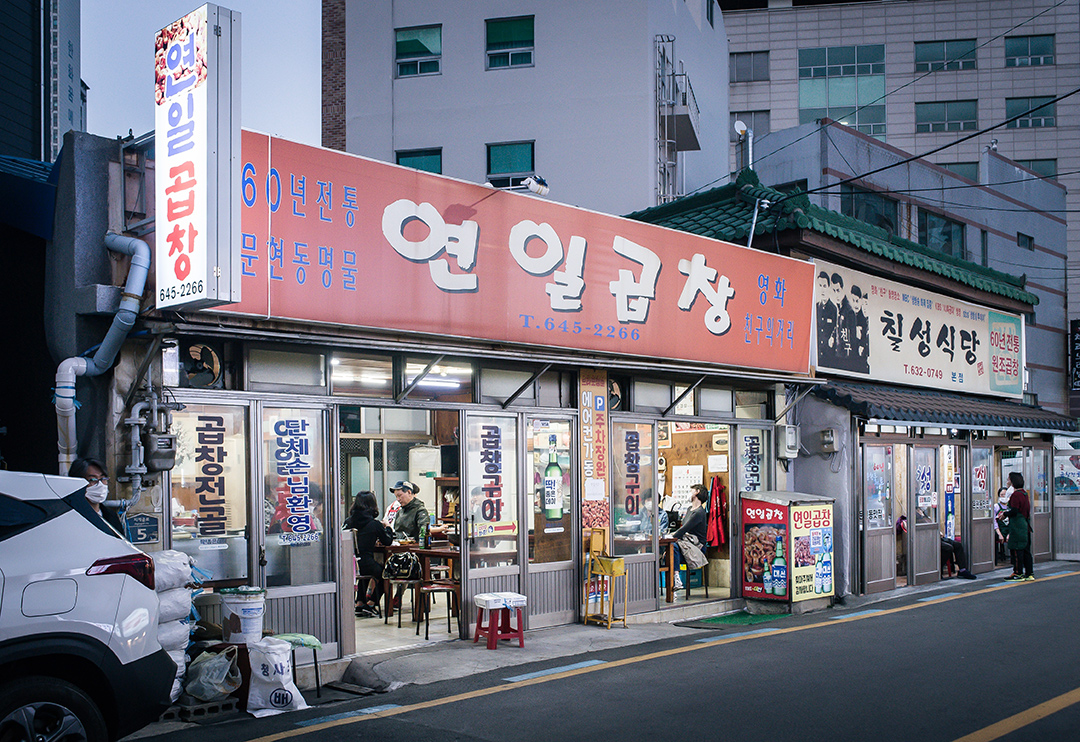 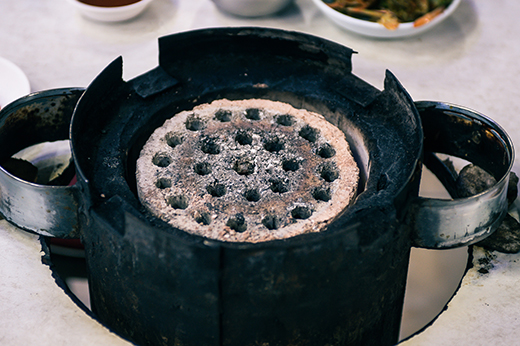 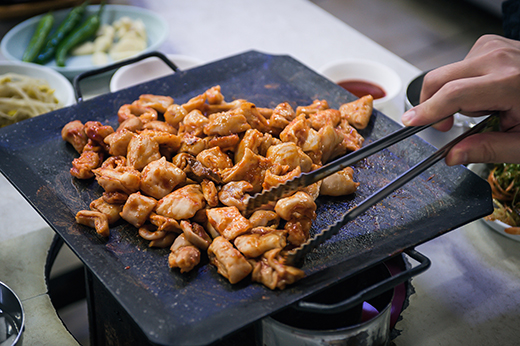 Gopchang will be precooked before being served, and you can grill them over briquettes. Gopchang in Munhyeon-dong have just the right amount of flavor. Dip intestines in the sauce and wrap them up with fresh vegetables in lettuce. Homegrown pork intestines go for 8,000 won per serving, cheaper than gopchang places elsewhere. The long-time owner of Yeonil Gopchang said, because these restaurants cater mostly to young locals and working class people, rather than out-of-town visitors, they are reluctant to raise prices.
These humble diners always put their customers above all else. That’s how they’ve been able to keep the alley alive for all those years. 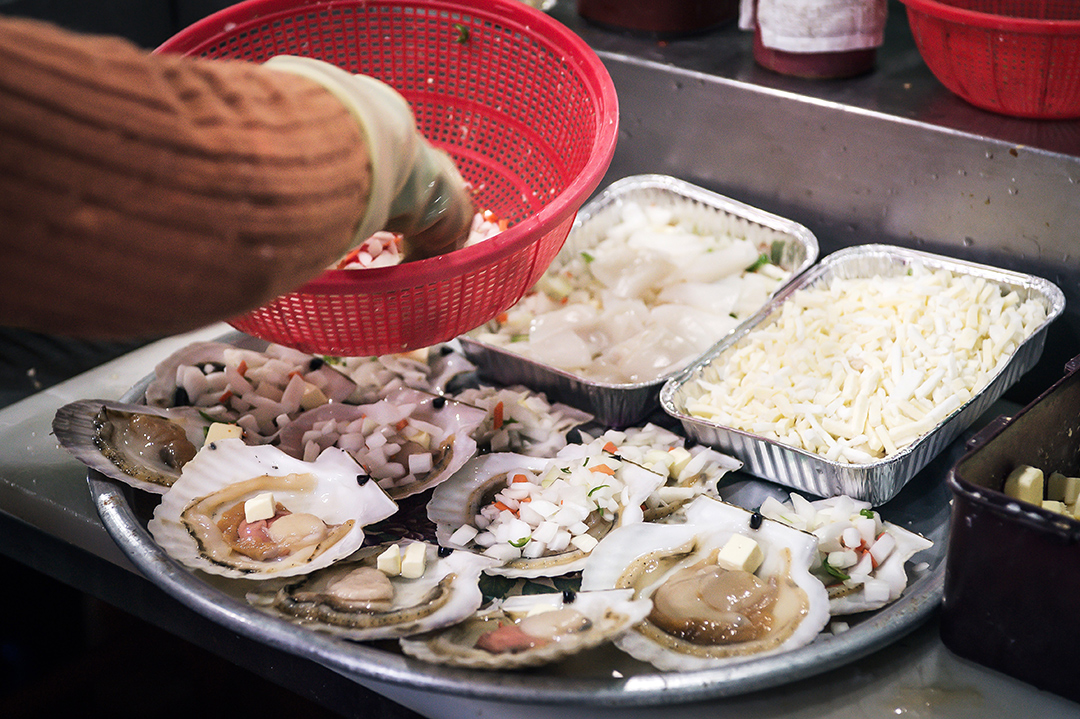 Songdo Beach in Busan is the first public beach in Korea. That is, it’s the first beach set up by the government. Its history dates back to 1913, when Japanese residents in Busan founded Songdo Amusement Co., Ltd. Songdo was where tourism of Busan took its roots, and at its peak, Songdo was the most popular vacation spot in the country. Amnam Park was built next to Songdo, offering a view of the beautiful beach.
On the vacated public parking lot below the trail leading from Amnam Park to Dongseom, you’ll see about 20 or so diners bunched together. Tourists coming back from Songdo Sky Park head straight to one of those places. At the Haenyeo Village, you get fresh seafood straight from the sea. Here at the Grilling Town, you get to cook your seafood over briquettes. 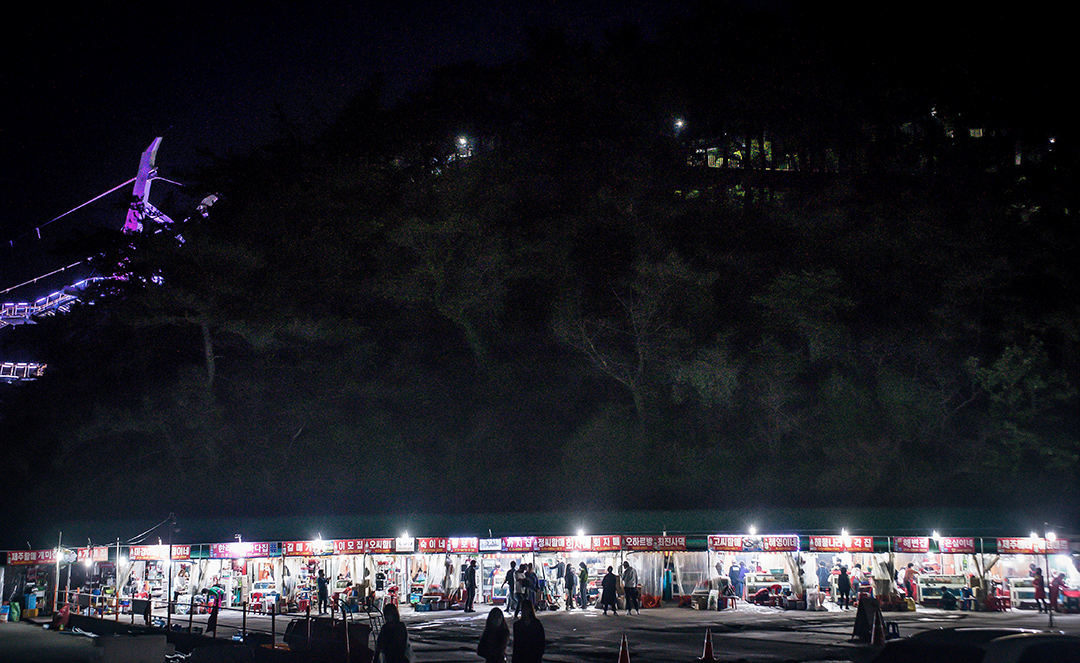 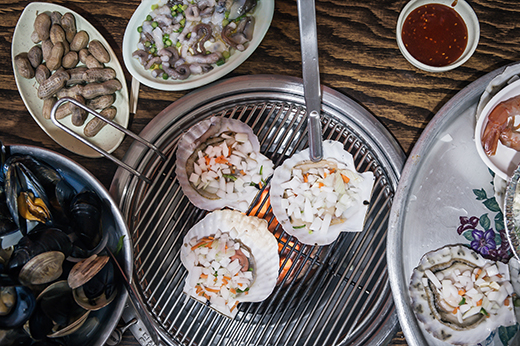 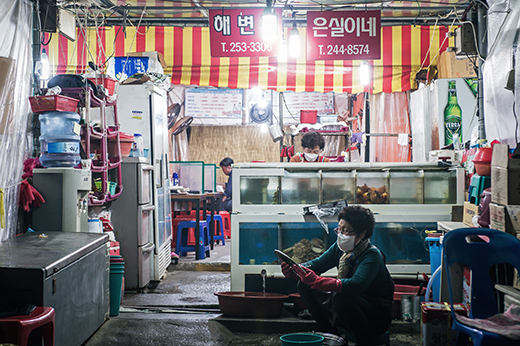 Grilled clams are the main dish, with seafood platter and abalone porridge also available. Clams usually start at around 60,000 won. Scallops come topped with cheese, with abalone, raw octopus and grilled shrimps also served. They may all look the same but each place serves different dishes. You will get your scallops with cheese in one, and get clam platter and grilled shrimps as the main items at another. You can finish it all off with fried rice. Stir-fry shrimp, octopus, chopped vegetables and chili pepper paste with vinegar in silver foil, and then mix in leftover sauce, rice and seaweed flakes. The slightly mushy texture and the biting taste make this a unique brand of fried rice. You must pay for parking at Amnam Park’s lot. 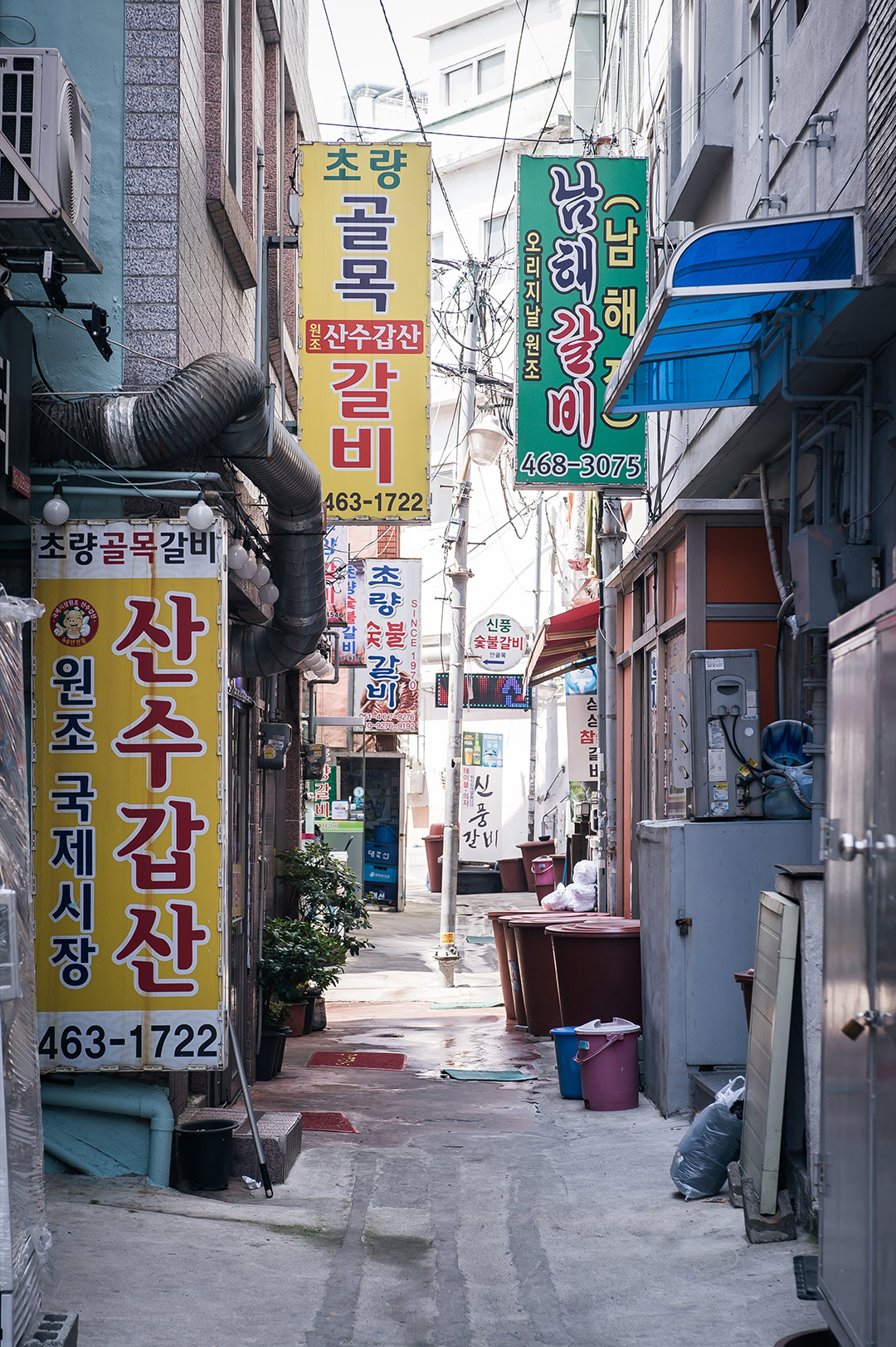 Choryang Pork Ribs Alley can be found at the start of a hillside path in Choryang-dong, near Busan Station. During the Korean War, this area was between downtown and a refugee settlement. Following the war, aid goods started flowing in through Busan Port, and dock workers flocked to the area. Hillside towns in Choryang-dong became homes for those workers. After a long day at work, they unwound with pork ribs and washed them down with soju or makgeolli. More eateries popped up, eventually forming Pork Ribs Alley by the late 1960s.
Like most other grilling places, diners in Choryang placed meat on gridiron over briquettes to cook. Things have changed of late. Eunha Galbi, one of the originals there, and other places now use thick metal plate, covered in silver foil, over briquettes. This helps keep ribs juicy. 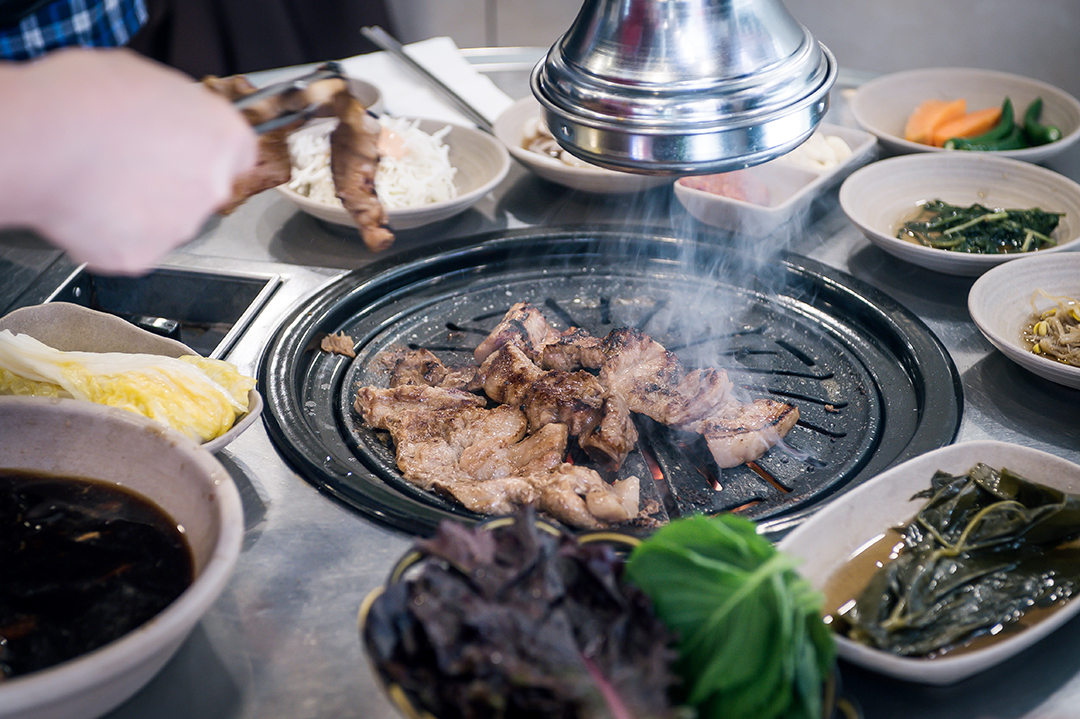 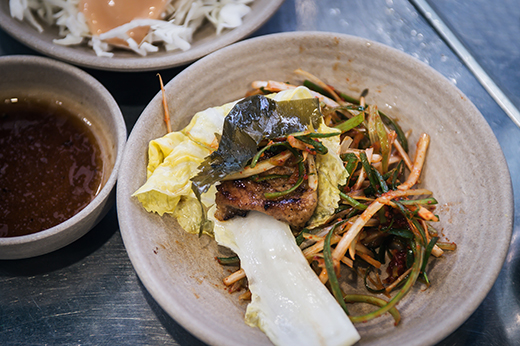 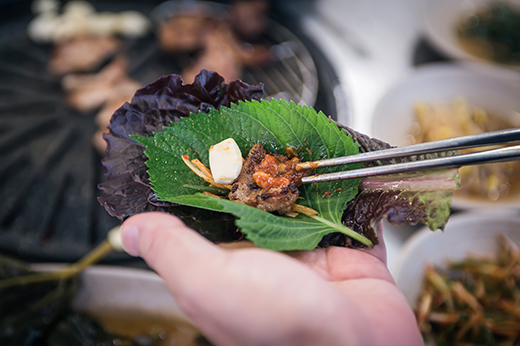 Sing Sing Sutbul Galbi, which has been around for over 30 years, went hardwood charcoal after a recent remodeling. The change was done to ensure great taste and flavor. Some other places have chosen gas. While briquettes can be charming in their own way, even some of the oldest restaurants have gone in different directions, apparently sensing that briquettes don’t always guarantee great taste. One serving of pork ribs is 9,000 won at most places. While most rib places in and around Seoul sell imported meat, diners in Choryang only sell homegrown pork.
There are fewer restaurants than before, but the alley remains popular today thanks to delicious meat and nostalgia. Thanks in no small part to social media, the alley is a hit among young people, too. This is how social media are supposed to work. 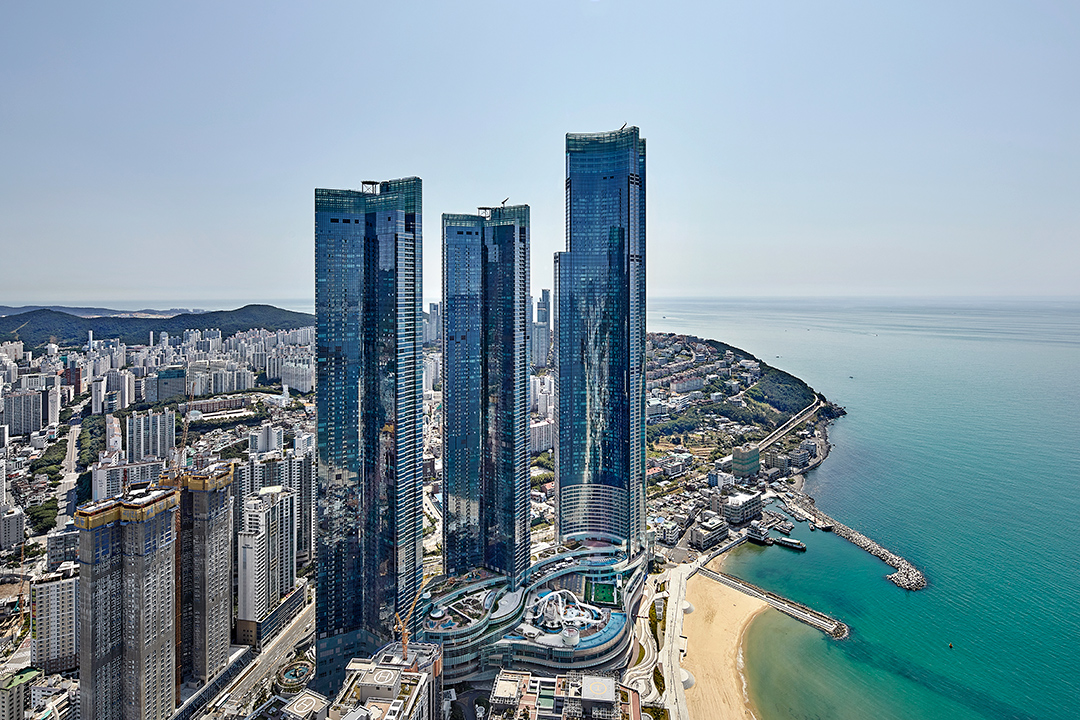 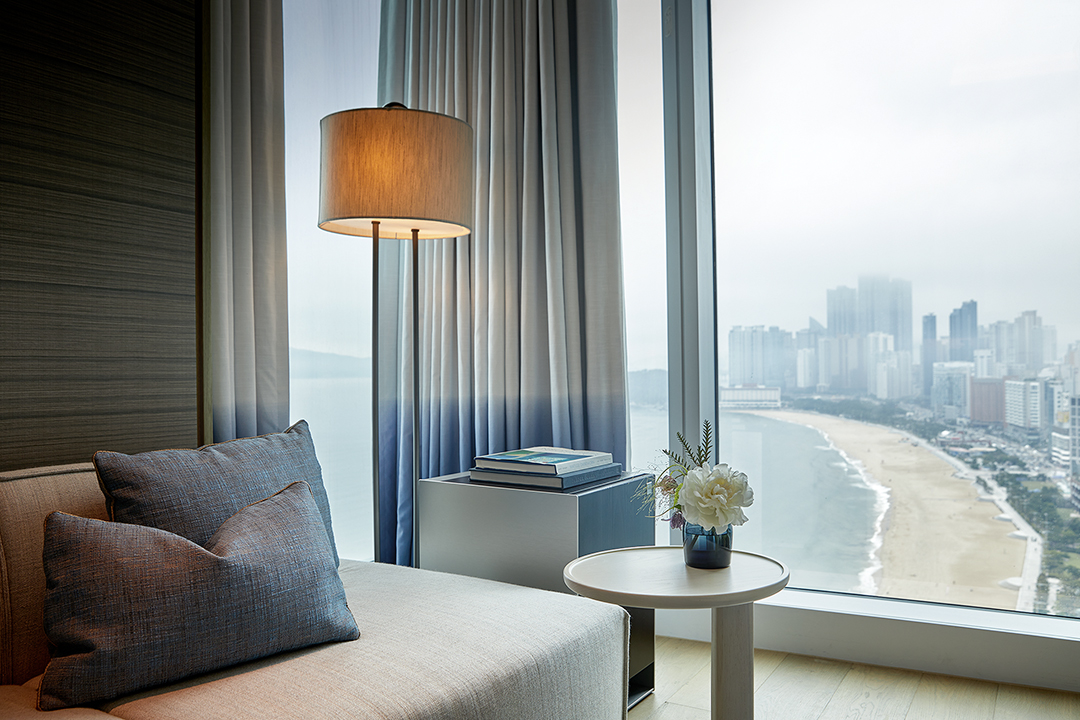 Where to Stay in Busan: SIGNIEL BUSAN and LOTTE HOTEL BUSAN
The second SIGNIEL hotel after SIGNIEL SEOUL, SIGNIEL BUSAN is located in LCT Tower, the new Haeundae landmark. Its 260 rooms offer breathtaking views of Gwangan Bridge over the ocean. SIGNIEL BUSAN brings you world-class dining experience, thanks to a wide variety of menus assembled with the help of three Michelin-starred chef Bruno Menard.
Located some 15 minutes from Jeonpo Café Street, LOTTE HOTEL BUSAN has 650 rooms, tailored to the purpose of your trip. There are many different types of rooms: including modern rooms overlooking downtown Busan, and Choo Shin Soo Star Room, decorated with equipment by the baseball star Choo Shin-soo.