Ancient Future: Visiting Bamboo Craft Villages in Vietnam
Hanoi has long seen large markets pop up around its fortress. With active trades between handicraft artisans and trade merchants, craft villages began to take shape in the suburbs. On a sweltering summer day, we toured bamboo craft villages near Hanoi.
Vietnamese people have been making a wide range of crafts using quality materials from nature. What makes their country special is that artisans with specific expertise, be it in pottery, wood craft or metal craft, have formed their own craft villages and have been handing down their skills to generations. There are said to be about 2,800 craft towns across Vietnam, most of them in northern Vietnam near the capital city of Hanoi. Let us take you to three bamboo craft villages.

Incense Blooming like Flower: Quang Phu Cau
Drive about an hour out of Hanoi and you’ll get to enjoy type of peaceful surroundings that you won’t enjoy in the city. And once you discover beautiful, oversize flowers on the road, then you’ll know you’ve entered Quang Phu Cau. These aren’t actual flowers, but incense sticks, coming as they are in such unique shape and colors that even the hard-to-impress types will find their jaws drop. 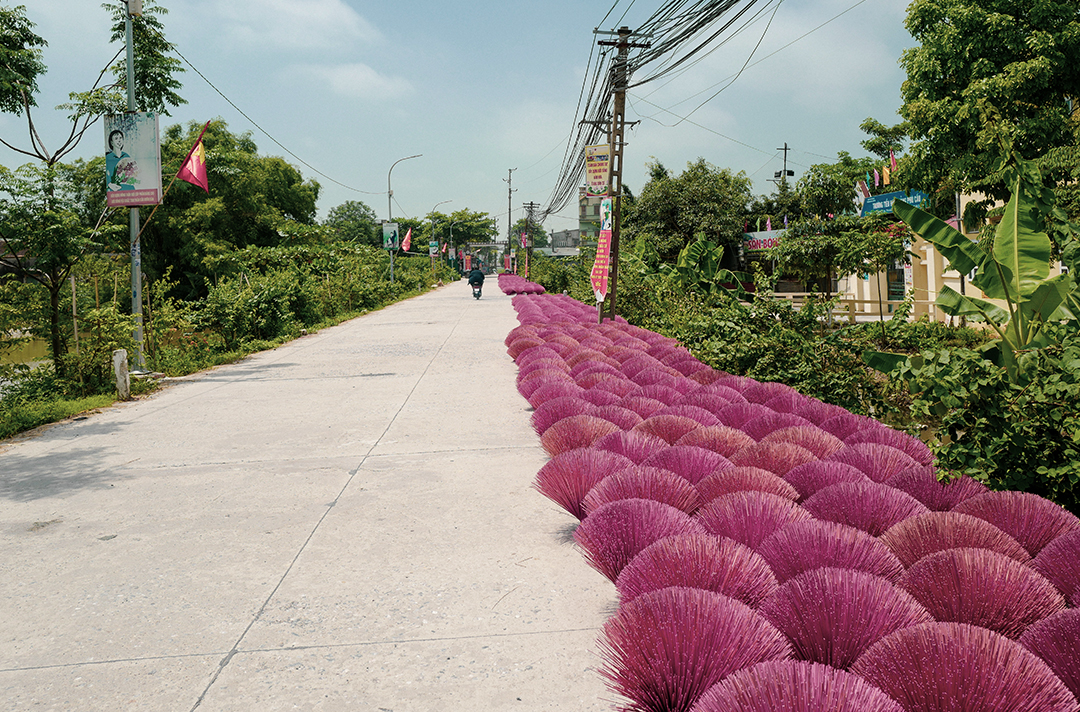 Quang Phu Cau is Vietnam’s leading destination for bamboo incense, with an estimated history of more than100 years. The village is full of bamboo incense in red, dark pink and powder pink. About 3,000 homes make bamboo incense and the town uses about 200 tons of bamboo each day.
The reason behind such a large amount of consumption can be found in Vietnam’s ancestral rites culture. In Vietnam, people build altars in temples, workplaces and homes to honor their ancestors. Food and incense sticks are must for these altars. The Vietnamese people believe the smoke from incense is a path connecting the living to the spiritual realm. Incense is an important part of life for them. 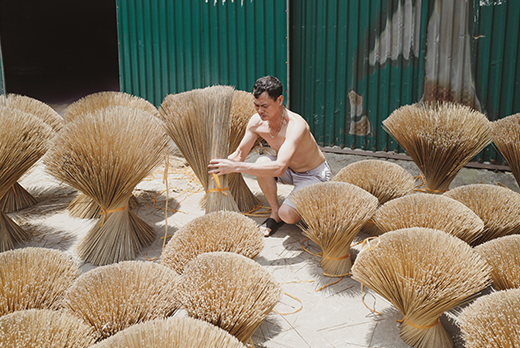 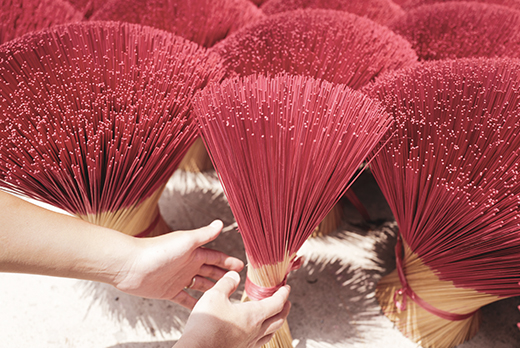 Bamboo sticks are dyed, and then they become incense sticks after incense paste is applied. © Jeon Haein 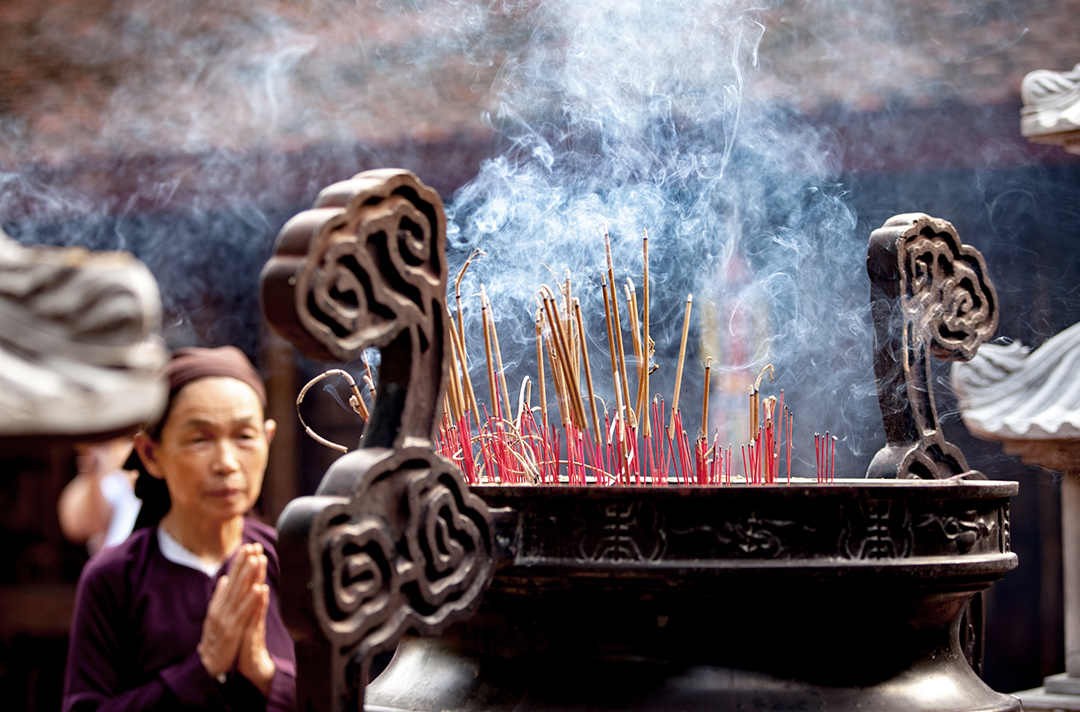 Making traditional bamboo incense sticks involves many steps. First, bamboo is split and rounded into sleek sticks, which are later dyed. They must be dried under the sun, and dyed sticks are gathered in a bundle for that particular process, giving the village its flower-like symbol. Once the sticks are dried, incense paste is applied for burning during rites. Paste is a mixture of incense, bamboo sawdust and glue. Artisans in the village go through these steps to give us beautiful bamboo incense sticks.

From Hunting Tool to Craft: Thu Sy
When the wind blows over the seemingly endless paddy field, rice will make a gentle sound and birds will take their flight ever so softly. At first, Thu Sy, located about 60 kilometers from Hanoi, may seem no different than your average countryside village. But it’s a town with more than 200 years of history in making bamboo fishing gear. Some 500 villagers make bamboo gear called ‘Do’ in Vietnamese. Thu Sy supplies 650,000 products across Vietnam each year, an incredible rate of production given the size of the town. Fishermen and farmers use products from Thu Sy to catch fish, eels and crabs. They’ve recently been used as eco-friendly lighting decoration and works of fine art. 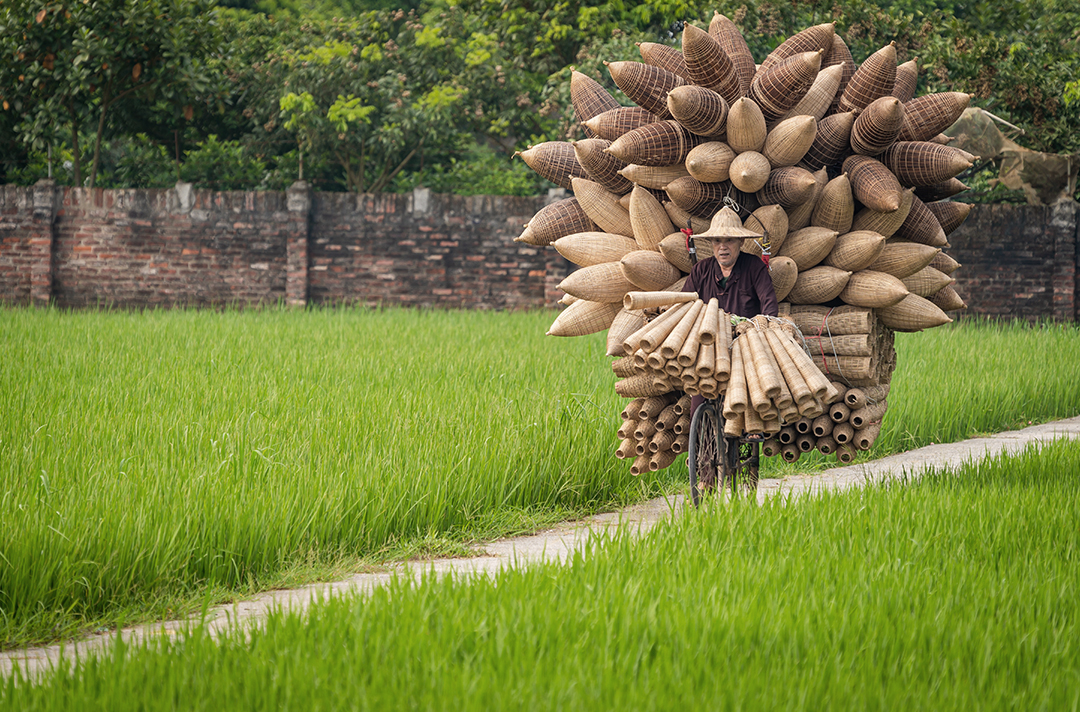 Finished fishing tools are stored in a warehouse and carried out to markets on bicycles. © Supermop, Shutterstock.com

As you walk around the village, you’ll see families putting together fishing gear with strips of bamboo. There could be three generations on hand, from grandparents down to their grandchildren, as they have conversations flowing while also keeping their hands busy. One by one, fish traps began to take shape. Grannies could feel their way through those bamboo strips as they build even the most complicated-looking gear. Their grandchildren peeked over their shoulders and started weaving strips themselves. “It was the same when I was their age back in the days. I started making fishing gear at five, sitting next to my grandfather,” one elderly man said, while looking at his grandson in the way only a loving grandfather can. 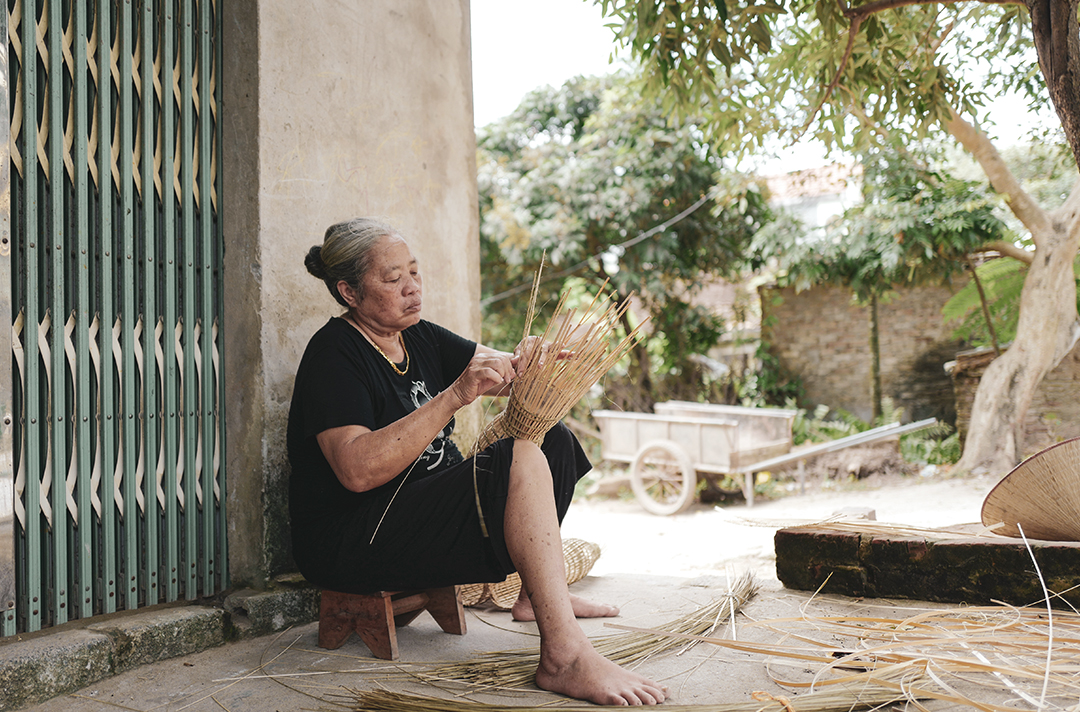 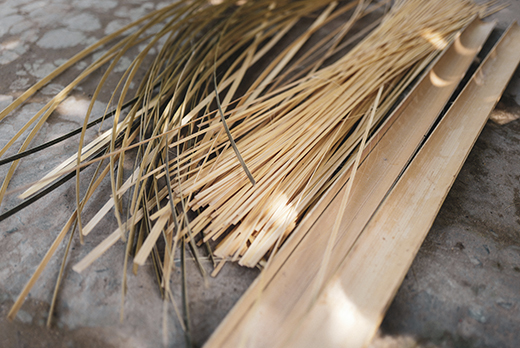 The most important piece of material for fishing gear © Jeon Haein 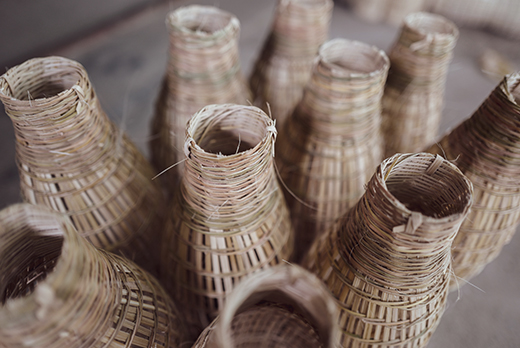 The town of Thu Sy is the largest producer of fishing gear in Vietnam. © Jeon Haein

All fishing tools at Thu Sy are entirely handmade. And people rely completely on Mother Nature to make them. They chop bamboo and dried strips under the sun to ensure durability. They then weave the strips to build the trap, which is fumigated to retain a shiny brown tone.
It fills the heart just to see these villagers at work, as they stay one with the nature, appreciate what they have around them, lean on each other and share laughter even over the smallest of things. Bamboo craft at Thu Sy, where everything is done with honest work of human hands, resembles the warm-hearted people living there.

Bamboo Craft at Its Finest: Canh Hoach
Canh Hoach is about 30 kilometers south of downtown Hanoi. The scent of bamboo in the air, similar to that of grass, will let you know you’re close to the village famous for several different types of bamboo craft. The town is basically covered in bamboo. Everyone is doing something with bamboo. It isn’t just shops or studios: villagers gather on front porches to work on bamboo. Streets are crowded with people delivering bamboo crafts. This is a town for and by bamboo. 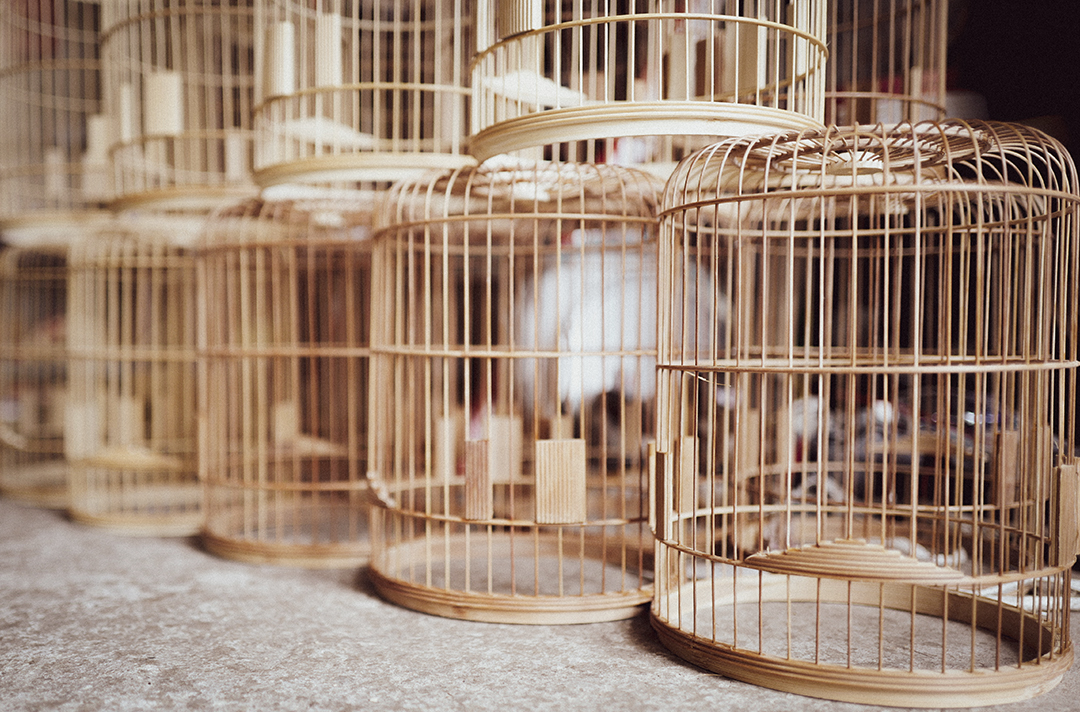 Bamboo pieces are bent and shaped to form the frame of a birdcage. © Jeon Haein

Folks at Canh Hoach use high-quality bamboo to produce all types of crafts. Bamboo lamp, lunch box and fan are among them, though the village is best known for its gorgeous birdcages. They’re famous for their durability and elegant beauty.
And there are good reasons why birdcages from Canh Hoach are so famous. Artisans in the village always stress the importance of the quality of the materials and meticulous process. The villagers bring in bamboo of the highest quality from places such as Cao Bang. They must have long nodes. 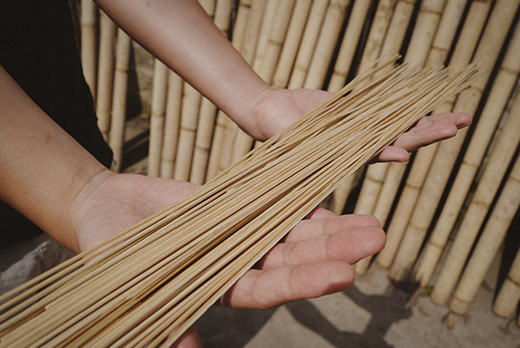 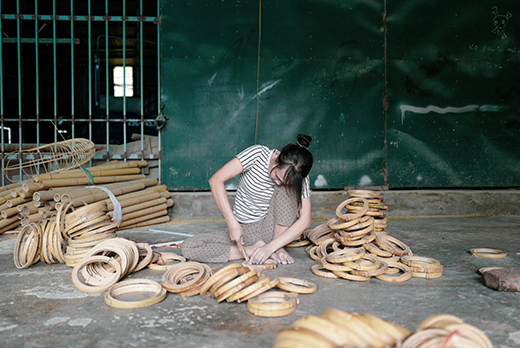 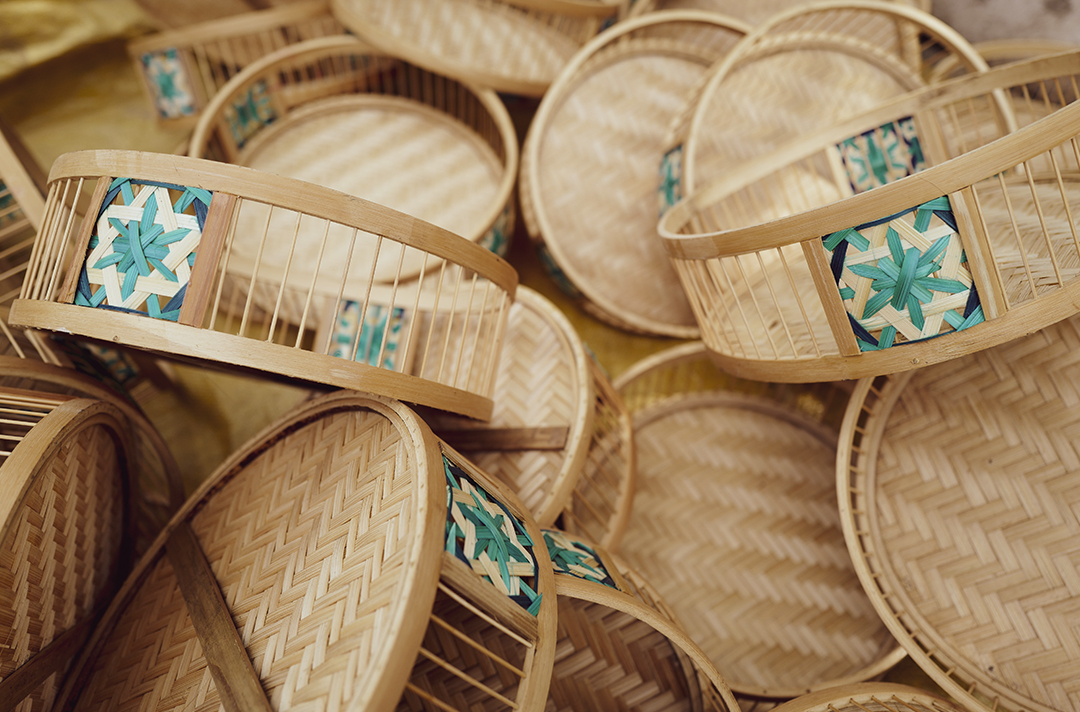 Once you get just the right bamboo, the hard part begins. Cut bamboo into slats and boil them for 12 hours. Then soak them in water for 10 to 15 days. This is to ensure their flexibility and durability. The pieces are then dried under the sun for days. Dried slats are then cut into tiny pieces, and they’re sanded and shaped until they become thin and soft like spaghetti noodles. Only then do artisans begin to bend and weave them. Bend bamboo slices and insert them into holes at the base to create the frame. It has to be completely symmetrical from all angles, and the process requires a high level of skill. Artisans here have expert sets of hands, which also allow them to put the finishing touch on cages with delicate decorations.
They sell as many as 3,000 birdcages a day. The town is jammed with vehicles carrying these cages to all over Vietnam. Today, people buy birdcages for different uses, for they also make for fine decorative pieces in wood interiors. Birdcages from Canh Hoach have found their ways to Singapore, Malaysia, Thailand and even Australia. 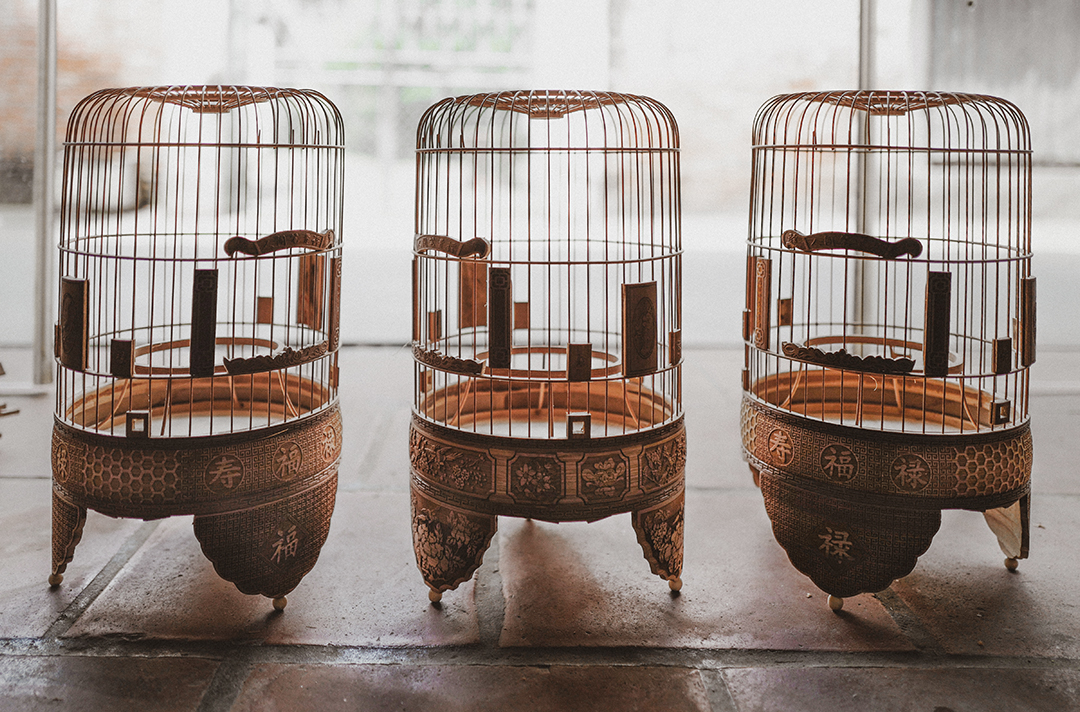 In these bamboo craft villages in Vietnam, artisans use craft skills that have been handed down for centuries to produce beautiful goods of the highest quality. From their passion for and devotion to their crafts, we learn the importance of the old, antique ways: materials that come from the nature and return to the nature, skills that are inherited, and values being handed down from one generation to the next. As we dream of harmonious co-existence between nature and human, and of living in a peaceful world where everyone gets along with everyone else, these are precisely the values that we have to highlight. 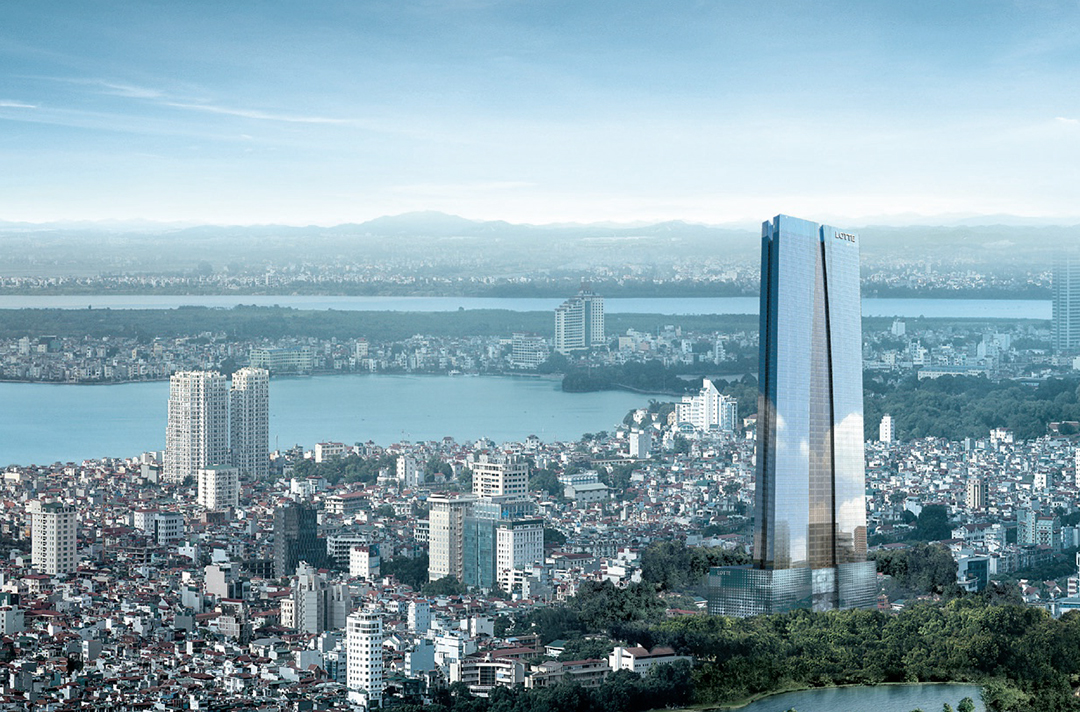 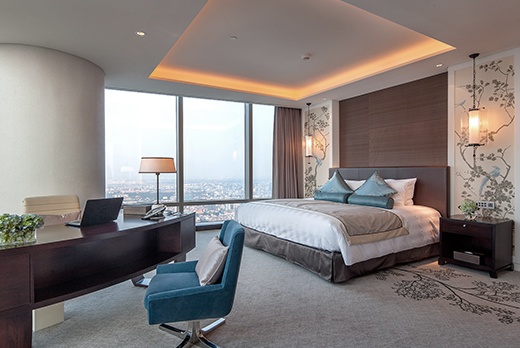 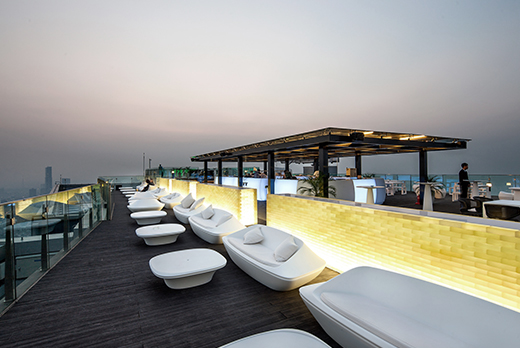