Taste of Jeju, Passed by Word of Mouth
Jeju is the one region in Korea that has kept its traditional culinary culture alive. Ha Mi-hyun, who specializes in ipmal food (food whose ‘spoken recipes’ are passed by word of mouth), met with 123 Jeju natives and farmers over 452 days to explore the history of Jeju cuisine. We joined Ha on the journey to discover the real taste of Jeju. 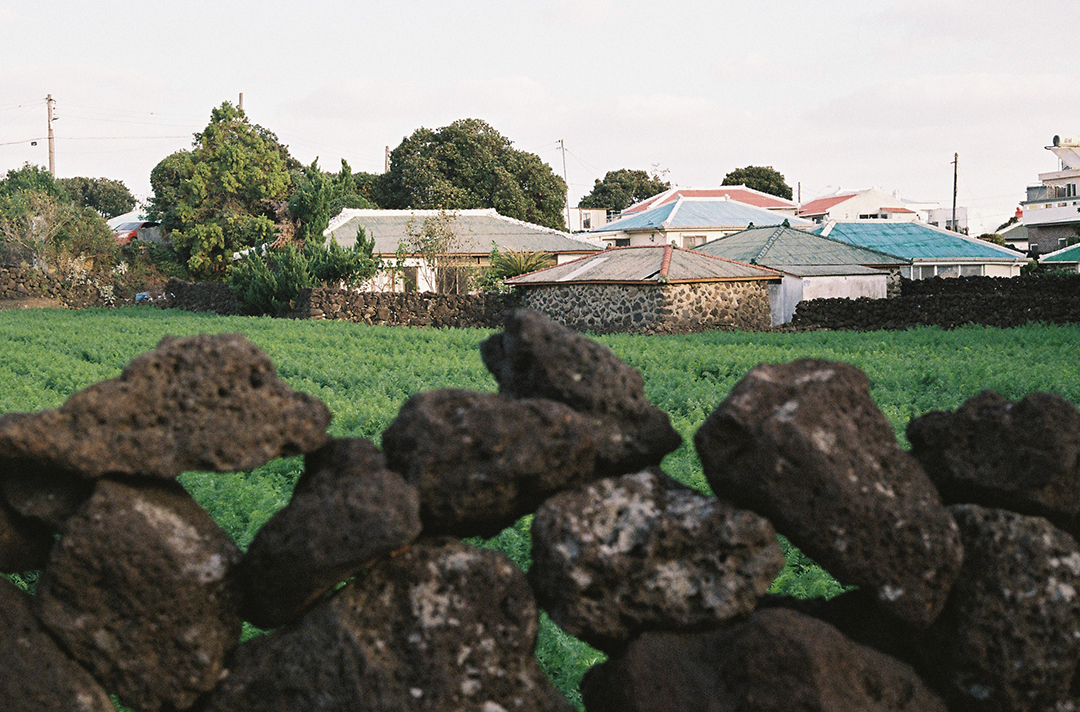 Thanks to its warm climate and rich supply of ingredients throughout the year, Jeju doesn’t have much need for types of food that can be stored for a long time without going bad. There isn’t even gimjang (kimchi-making) culture there. People of Jeju can just grab things from their land and the ocean and mix them up on the spot to put together delicious meals, such is the wealthy reserve of fresh ingredients. They grow their own vegetables, and whatever they don’t cook at the moment simply stay on the ground. They have little use for plastic wraps or bags to store food, and these small gardens, locally known as ‘wooyoungpod,’ are like natural refrigerators.
There are recipes in Jeju that won’t require more than 15 minutes, with about four or five ingredients. These seemingly modest meals may have been borne out of necessity due to people’s tight working schedule, but perhaps they may be just the type of meals for the time we live in. Sure, we can always go for fast food, or go grab something prepared by famous chefs. But Jeju is home to truly fresh ‘fast’ food. 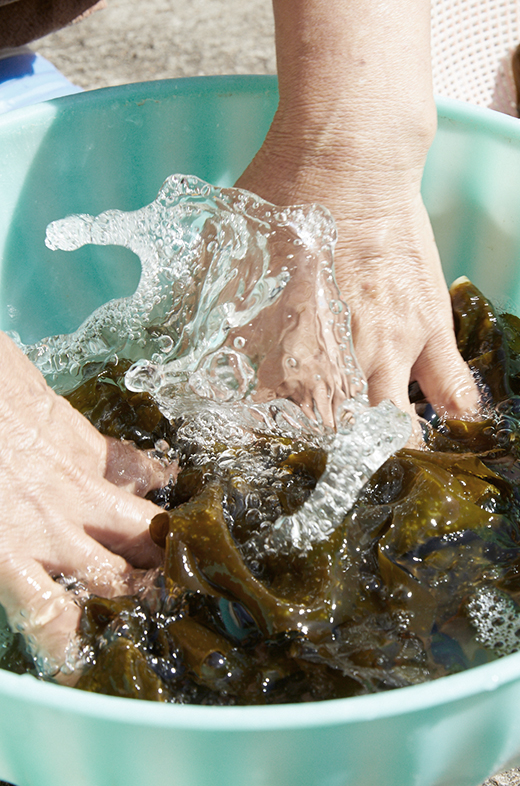 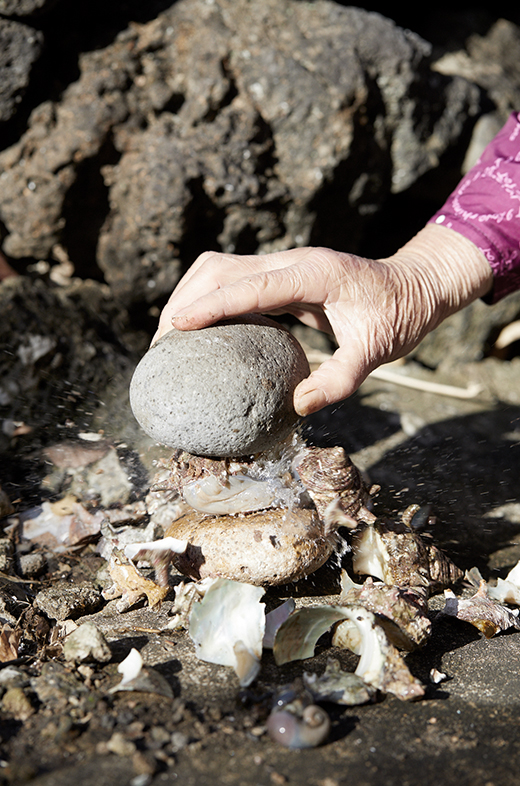 Sanding conch shell on a rock by the ocean, without tools. © Lee Juyeon

Jeju-style Fast Food: Easy Recipe Offering Great Taste
One key feature to Jeju cuisine is to generate optimal taste from simple recipes. Natural flavors from local ingredients help in that regard, and Jeju has been blessed with incredible natural surroundings that make it all possible. And in addition to taste of food, the great nature should also influence characters of people living on the island. Think of sea urchin, which has a hard and spiny shell on the outside but soft gonads on the inside. People of Jeju may seem aloof and standoffish at first, but I spent more time with them making meals together, I got to see the softer part inside. 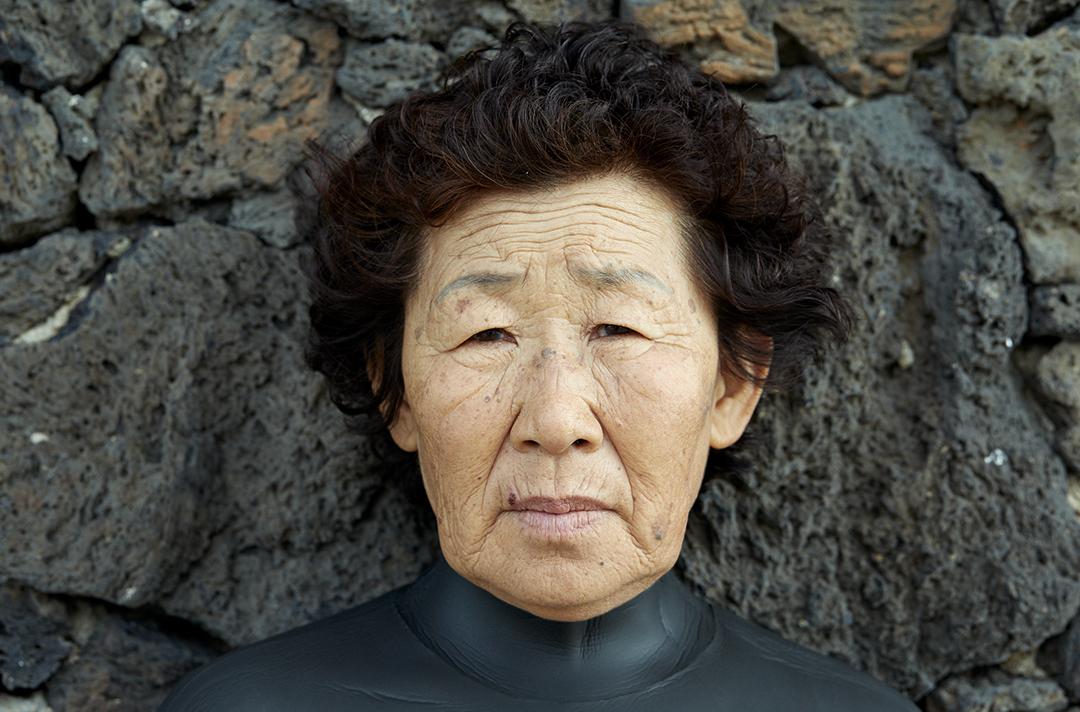 “There’s really not much to Jeju cuisine here. We just grab things from the land and the sea, mix them up, eat it as quickly as we can, and then go back out to work.”
Words from Jeju farmer Choo Mi-sook

A farmer named Yang Myoung-sook made geotjeori (fresh kimchi) using fresh canola oil and sweet-tasting yellow napa cabbage. Another farmer, Choo Mi-sook, said bingtteok (Jeju-style pancake) should be made with Jeju buckwheat to get that sticky texture. Kim Tae-ja, a farmer and a native of Seogwang-ri, likes to brew bones of tile fish in seaweed broth after making porridge with the fish, and then use remaining bones and intestines as fertilizers for her garden. She said chives grown on those fertilizers are especially delicious. As I observed these Jeju natives, people who’ve spent their lives cultivating small gardens and cooking meals, it occurred to me that the gods that they so worship are all on the ground and on their dining tables. And meals prepared so by Jeju natives aren’t great just because they’ve been around forever; they’re delicious in their own right and they’re great for the contemporary taste buds. 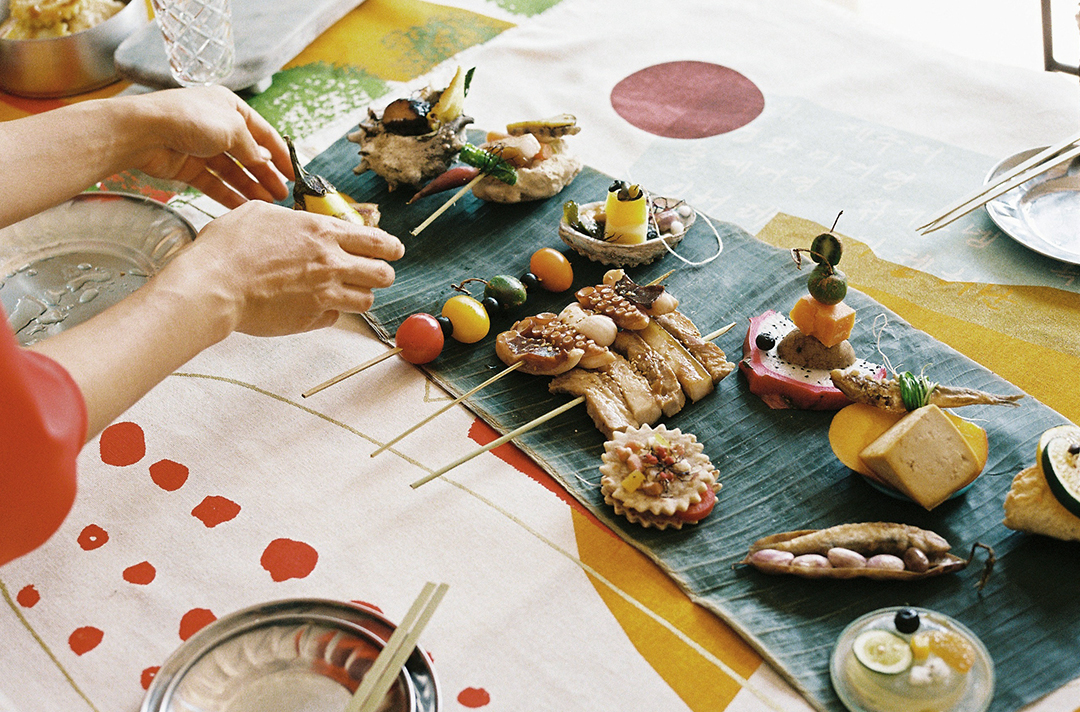 Ha Mi-hyun is working on a plate of Jeju food, prepared with a recipe passed down by word of mouth. © Lee Juyeon

Hot pepper and salt aren’t readily available in Jeju, and Jeju dishes typically fall on the bland side, without being all that salty or spicy. In Jeju, a typical meal prepared on recipes passed by word of mouth features ‘bap’ made with buckwheat and barley because rice doesn’t grow well on Jeju soil. Add local vegetables, fish and boiled pork to the mix, and it’s clearly a different meal to the one we often consume, with excessive amount of carbohydrates, gluten and sodium. Fresh vegetables are readily available throughout the year, and people in Jeju don’t have to store anything. They simply pick things off the ground and cook them on the spot. It’s a healthy type of fast food unique to Jeju, rather than the typical, processed and seasoned fast food. Kim Young-hee, a farmer, told me about specific flavors for different kinds of sea urchins and crabs. As I was trying to figure out exactly what they all tasted like, I also got to learn more about Jeju and people living there.
As recipes are passed from one Jeju native to another by word of mouth, here’s hoping they serve as the bridge that connect us with our past and take us to the future. 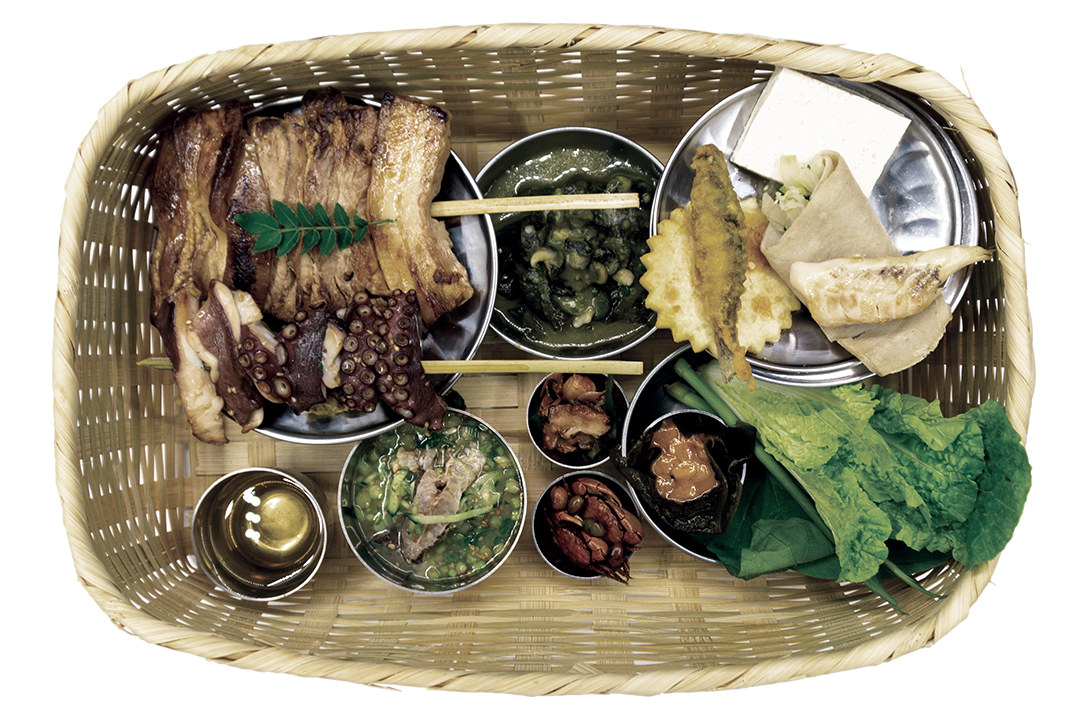 Taste of Jeju, Passed by Word of Mouth © Lee Juyeon 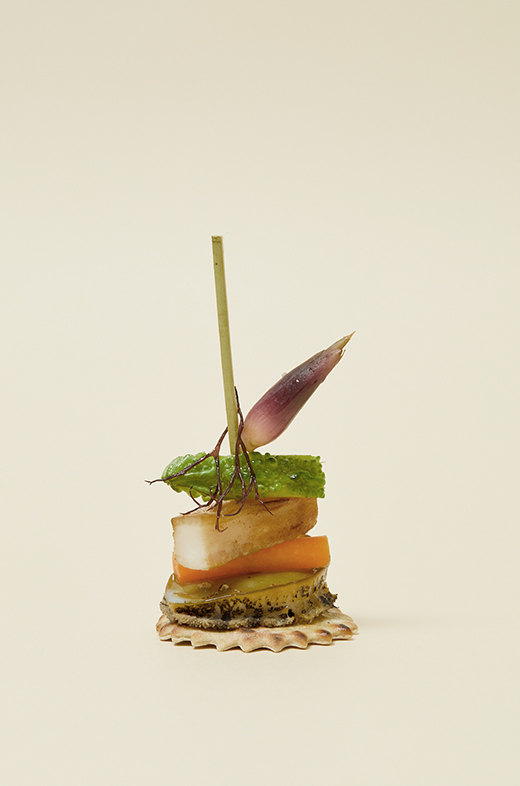 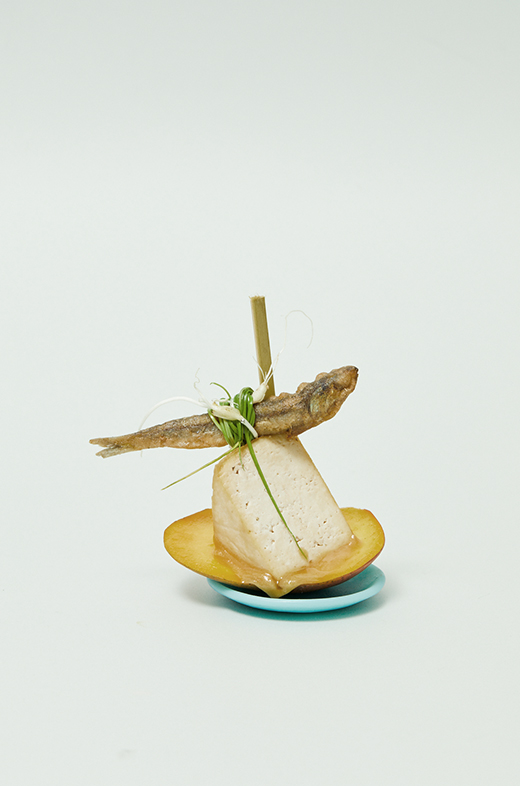 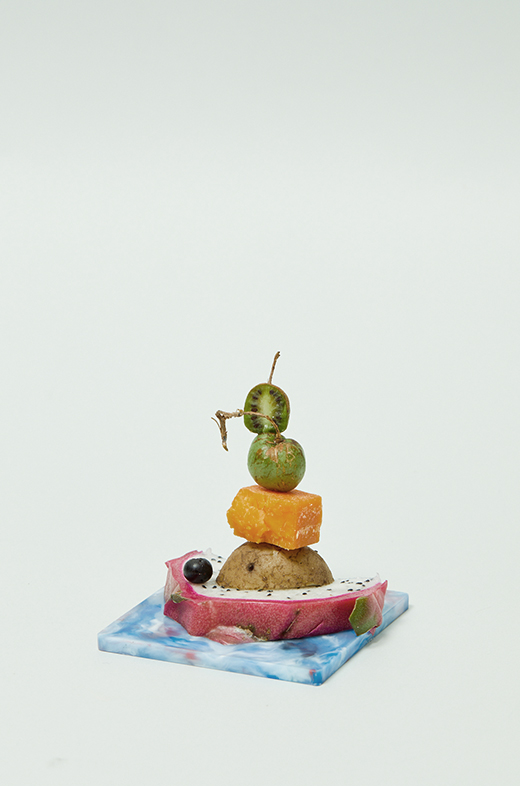 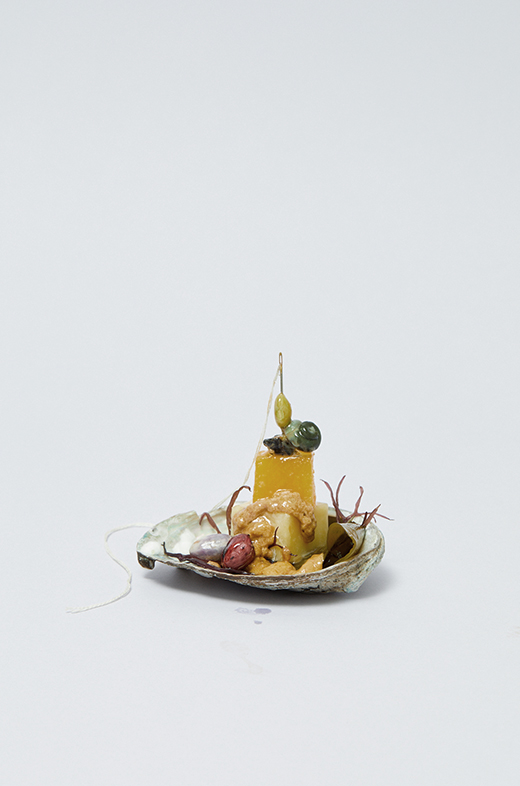 PROFILE
Ha Mi-hyun, CEO of Spoken Company and the author of this piece, has traveled across Korea and around the world to study food and ingredients by local farmers. She has given the moniker ‘spoken recipe’ to dishes prepared with recipes passed by word of mouth among farmers or natives. Ha has established her own, unique standard in her research on the traditional taste of Korea, borne out of need for survival and of hunger. Ha has written < Spoken Recipe, Jeju Wooyoungpod > about spoken recipes of Jeju.