Delicious Breakfast to Start a Day
Thinking of how a good breakfast can help one feel energetic in an unfamiliar city, we looked for restaurants in Seoul with eye-opening breakfast options that cater to the global palate.
An early-bird traveler catches the meal. With lots to see and eat, a traveler’s day begins at daybreak. Although we are living through a time in which traveling comes with many hurdles, we can spend time imagining at heart that we’re travelers. Start by having breakfast at local restaurants. We introduce various restaurants in Seoul that present international breakfast menus such as Australian coffee, German pastry, Vietnamese pho, Korean gukbap(rice soup), and hotel-style breakfast buffet.

Relaxing With Australian Coffee and Sunlight
FourB Right
At 7:30AM, a day begins at FourB Right Gwanghwamun branch. The morning sunshine comes through the exterior glass wall, while a warm cup of joe and sweet, crunchy bagel fill your table. A peaceful morning scene you picture for your dream vacation takes place right here. A slight alteration is that those occupying the tables in the hall are wearing office attire. FourB Right is a local custom shop of FourB in the CBD(Central Business District) with  a simplified menu. It opened in a first-floor corner of Concordian Building in September 2019. 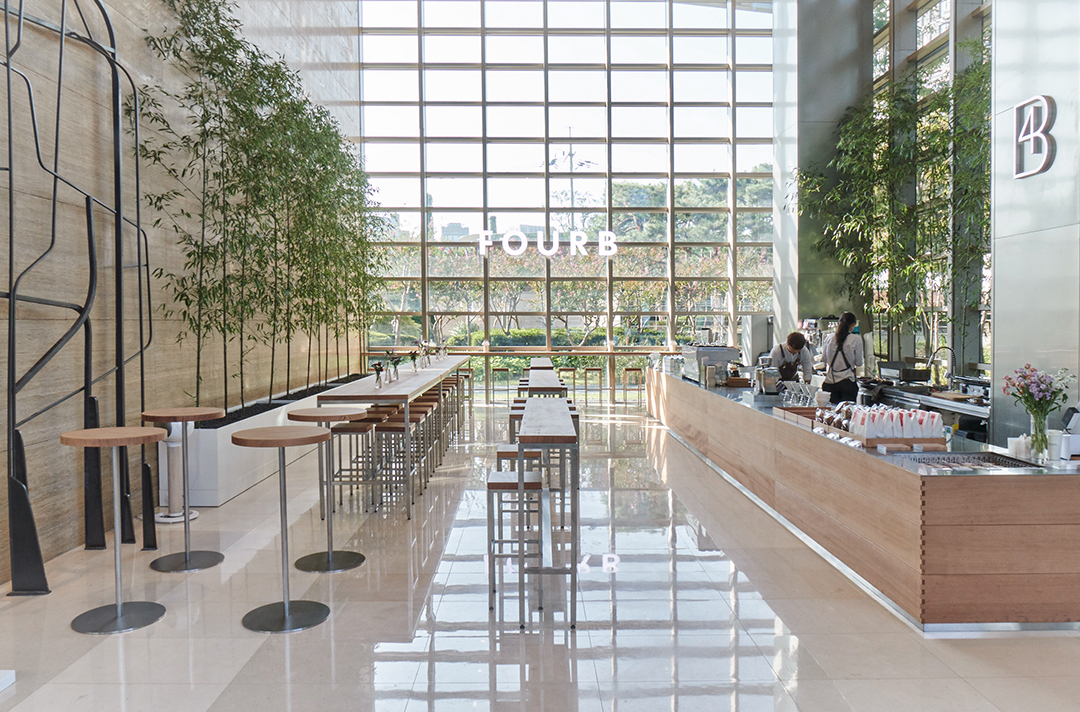 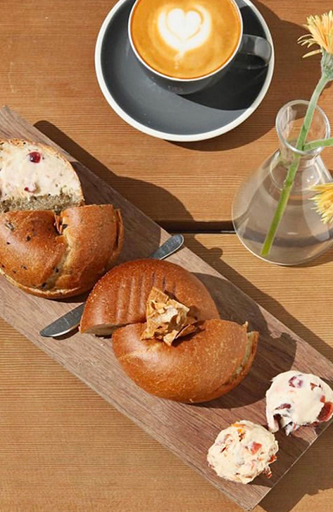 A bagel and cream cheese, plus coffee, are a perfect breakfast menu. © FourB 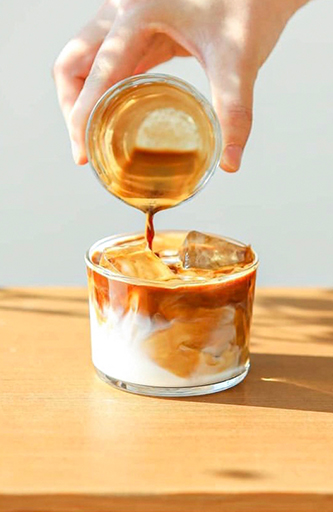 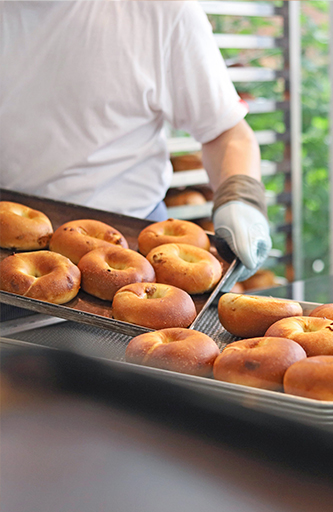 With three items on the menu — coffee, bagel, and cream cheese, FourB has been enjoying popularity for a long time. Its ideal business model follows an Australian coffee culture, which is opening business early in the morning and interacting with customers while enjoying relaxing moments in-between. FourB became known to people as a bagel shop, but if you’re visiting FourB Gwanghwamun branch famous for its coffee, try piccolo(smaller than regular latte, but with darker flavor). As for the bagel, we recommend a sweet potato bagel, which has bits of sweet potato in it, with a plain spread. The sweetness of sweet potato goes better than expected with the savory, rich flavor and aroma of piccolo. Also not to be missed is smoker ice cream using FourB’s signature coffee blend ‘smoker.’ It’s only available at two FourB locations, Gwanghwamun and Hongdae.
Address FourB Gwanghwamun, 76 Saemunan-ro, Jongno-gu, Seoul
Inquiry +82-2-6744-0120
Hours Weekday 07:30~20:30, Weekend 10:30~20:30
Homepage fourb.co.kr

New-Concept Vietnamese Brunch
Nampark
It’s a good choice for those who crave authentic Vietnamese pho in the morning. “While I was staying in Vietnam for a short while, I would have rice noodles every morning. Starting your day that way, you feel you’re blending in with the local life. The memory of the warm soup is what I want to offer in Korea through Nampark,” said Nam Joon-young, owner-chef of Nampark. Opening at 8AM and closing at 3:30PM everyday except for Mondays, Nampark is a Vietnamese-style brunch restaurant. Open since July last year, Nampark is a brother business of Hyotteu, a famous Vietnamese restaurant in Sinyongsan. Chef Kim Bo-young is in charge of the general operation of the restaurant, making sure those who visit Nampark located in a quiet street in Yongsan get a hearty breakfast. 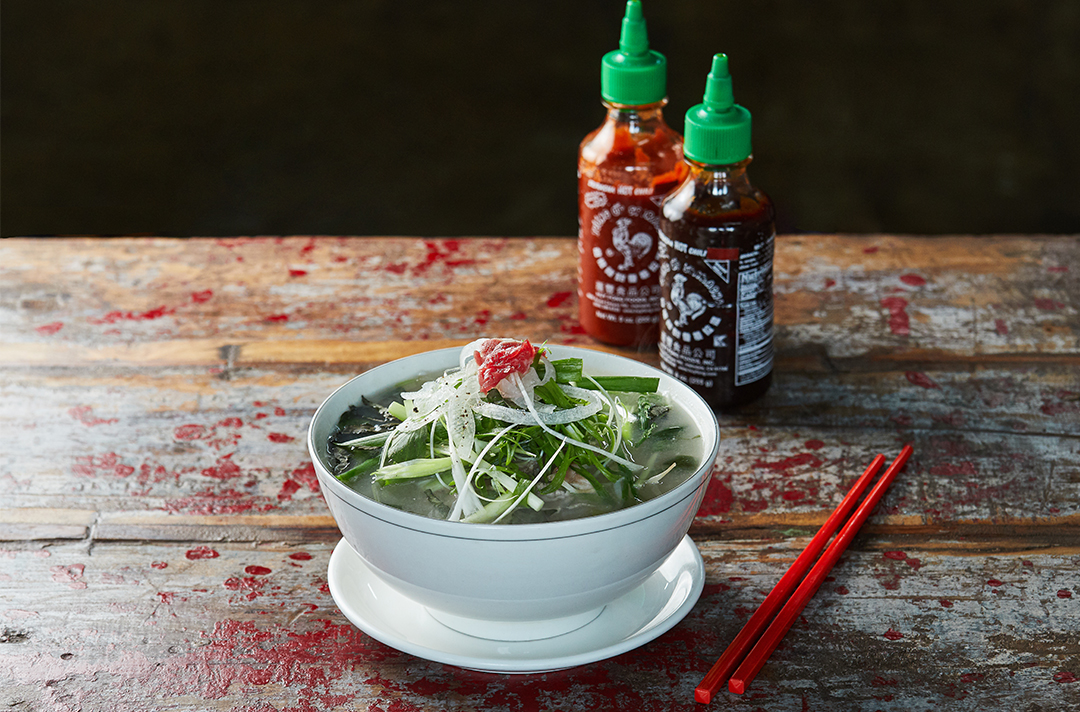 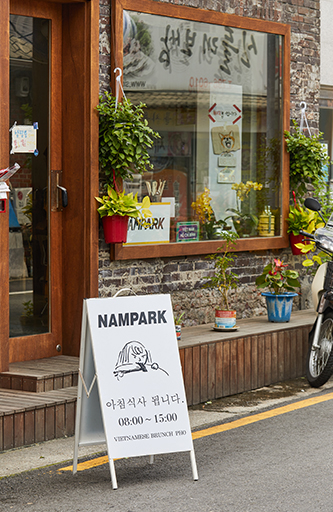 A standing signboard greets guests early in the morning. 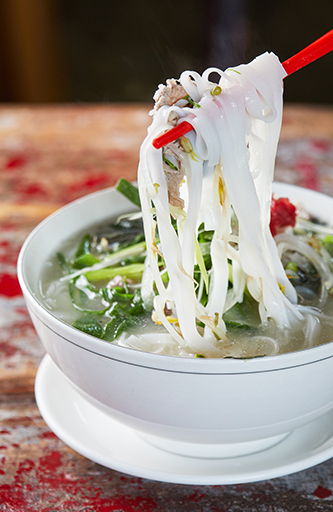 The beef bone broth and pho noodle mingle in the mouth perfectly. 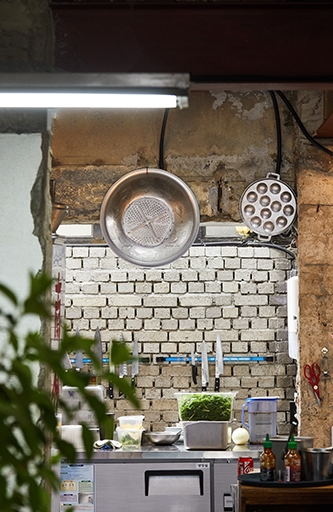 Vietnamese people are known to eat out in the morning. Rice noodles are one of the main breakfast dishes. Nampark’s menu also has only two options — Korean beef rice noodles(Pho Bo)and spicy Korean beef rice noodles(Pho Bo Cay). The restaurant focuses on the broth made by boiling beef bones and brisket for a long time, and adds various herbs and vegetables for diverse textures and flavors to create a noodle soup unique to Nampark. Although it is difficult to determine which one’s better, chef Nam recommends the spicy pho which has a thick fan base. “After eating all the noodles, you can put in white rice with onion flakes in the soup, enjoying it as if it were a separate dish. If you are Korean, rice is a necessity in every meal. I guarantee that you will be missing the flavor in a few days.” Rice and noodles are provided at no additional cost. The side menu includes boiled Korean beef slices(half plate), Nampark salad with home-made nuoc cham dressing, and small-serving mix jangbap with jang sauce.
Address Nampark 11-31, Hangang-daero 76-gil, Yongsan-gu, Seoul
Hours 08:00~15:30, Closed on Mondays
Instagram www.instagram.com/noodle.shop.service

Journey Begins with Hotel Breakfast
LOTTE HOTEL SEOUL Executive Tower Le Salon
Every morning while breakfast is served, an aromatic scent of egg fills Le Salon. If you wait leisurely with your slowly-awakening appetite, the hotel manager will come to take your order of tea and eggs. The elegantly-designed teapot contains tea from French premium tea brand Dammann Frères, while the egg dish shows written greetings ‘Good morning’ via the lettering service. The considerate and heartfelt gesture of LOTTE HOTEL SEOUL Executive Tower, famous for its detail-oriented and sophisticated services, can be felt through Le Salon breakfast. Located on the 16th floor, Le Salon is a business lounge where hotel guests can enjoy breakfast from 6:30AM to 10AM. 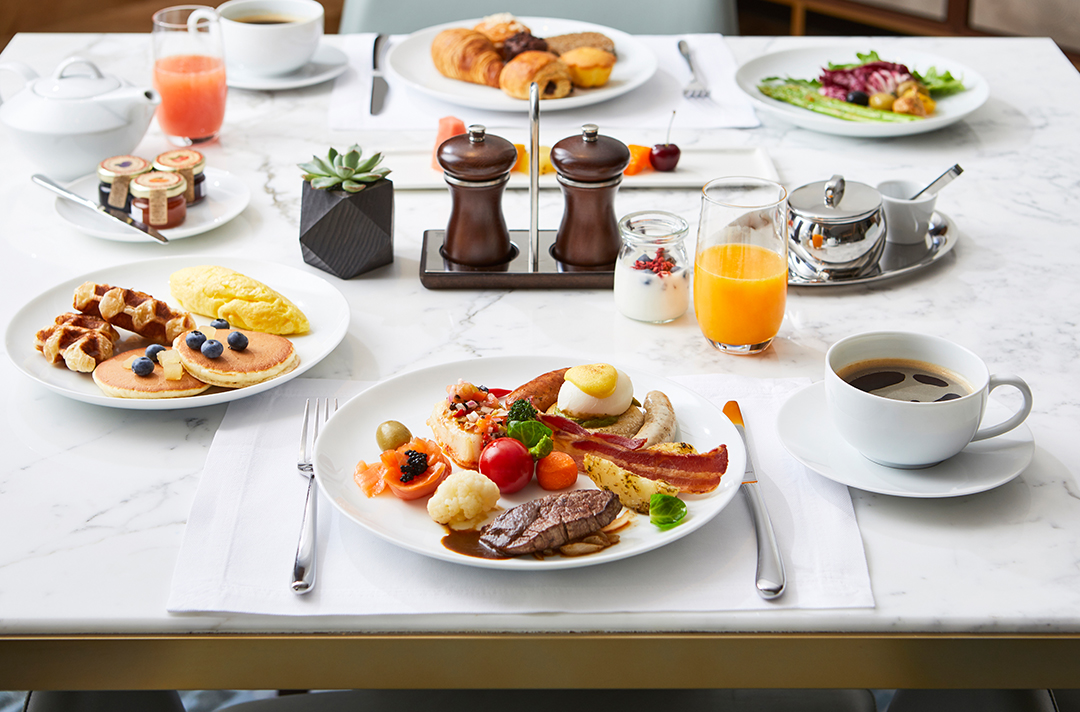 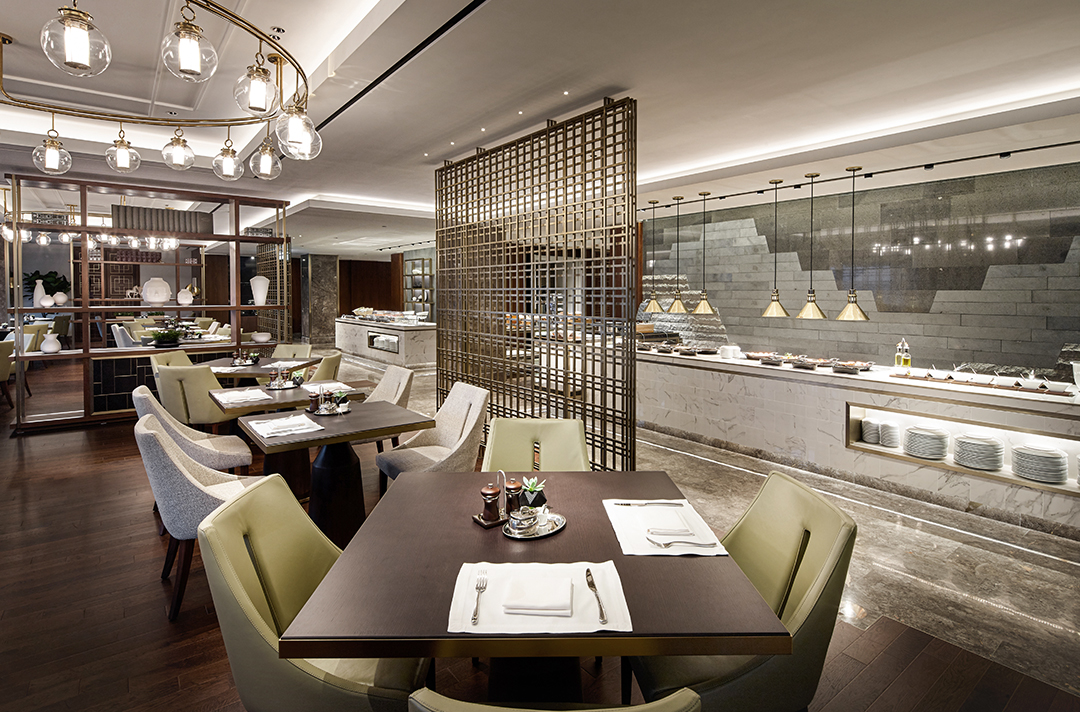 Le Salon’s signature breakfast is croffle and pancake. Croffle is one of the latest trends using croissant dough to make waffles that are ‘crisp on the outside and moist on the inside.’ Many people pick croffle to be the best waffle ever. Its unforgettable, addictive flavor should be enjoyed in its original state in the beginning. Gradually, you can add toppings of your choice, such as honey, maple syrup, chocolate syrup, whipped cream, and fruit jam. Meanwhile, Executive Tower’s Le Salon breakfast service shows the hotel’s effort to offer customized meals to its guests. The hot dish corner has meat, fish, and grilled vegetables that are changed out on a daily basis, along with boiled eggs. You can choose either hard-boiled(8 minutes) or soft-boiled(4 minutes) eggs. Even for bacon, you can choose an extra crunchy or regular crunchy texture. At a salad corner featuring varying sets of vegetables according to the day of the week, you can have smoked salmon with four garnishes including onion and caper. Seasonal fruits, yogurt, and muesli are also popular.
Address Le Salon, LOTTE HOTEL SEOUL Executive Tower 16F, 30 Eulji-ro, Jung-gu, Seoul
Inquiry +82-2-771-1000
Hours Breakfast Buffet Everyday 06:30~10:00
Homepage www.lottehotel.com/seoul-hotel

Rice Meal Awakens Koreans
Hadongkwan
Hot soup may be running in the veins of Koreans. On a day when you think you want to give yourself an extra boost of energy, you think of gomtang, a clear and nutritious beef-bone soup. If you are a traveler who wants to enjoy every minute of 24 hours in Seoul nicknamed ‘a city that never sleeps,’ you had better choose gomtang for your breakfast or brunch to fill your stomach. Luckily, the main store of Hadongkwan in Myeongdong opens at 7AM in the morning. Hadongkwan is a restaurant specializing in gomtang and is one of the well-known old establishments. The restaurant is a three-generation business. It first opened in Suha-dong, Jung-gu in 1939, but relocated to the current address in 2007 on account of urban redevelopment near Cheonggyecheon Stream. Recently it was featured on an MBC program dubbed < Omniscient Interfering View >, as a popular restaurant recommended by Lee Young-ja. The TV program showed Lee’s agent shedding tears, overwhelmed by the taste of gomtang and suyuk at Hadongkwan. 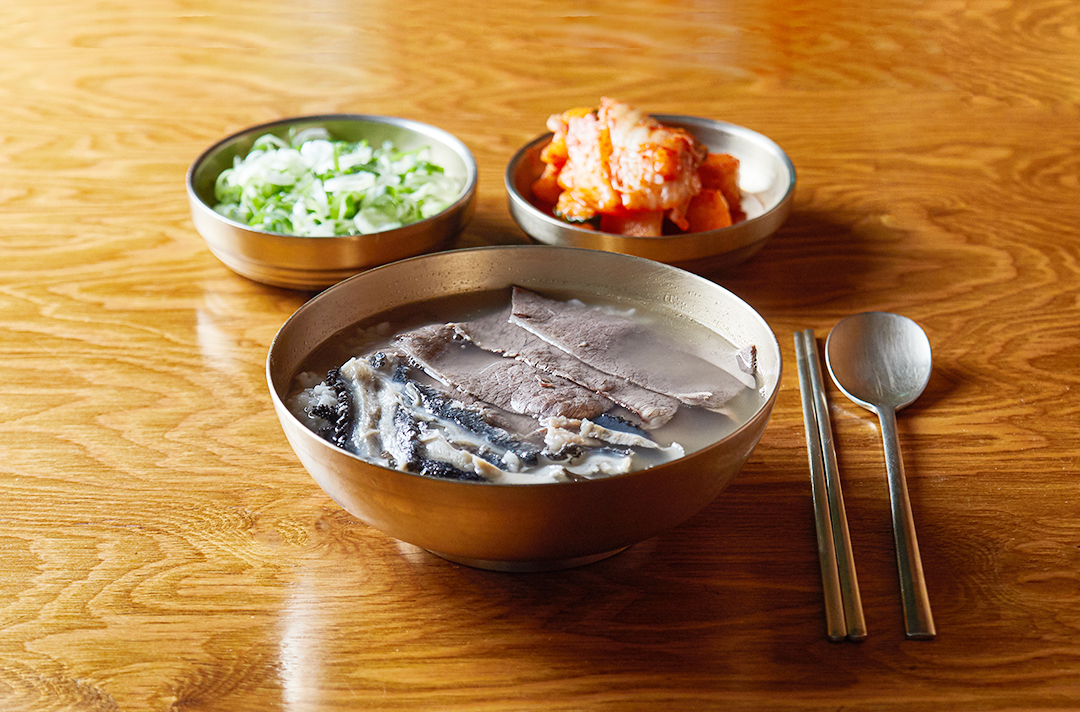 The entrance to Hadongkwan’s main location in Myeongdong 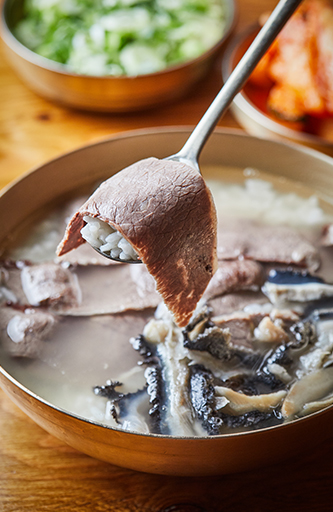 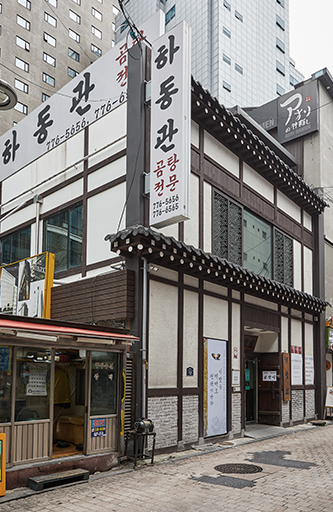 The exterior that exudes so much history

After the order is made for gomtang, it will soon be served in a brassware bowl. A clear broth can be made by boiling beef brisket, bones, and intestines for hours and skimming off the residual oil every now and then. It has an honest and nutritious flavor that has continued for generations. Hadongkwan’s gomtang is a soup mixed with steamed rice, which tastes even more savory as the soup seeps into the rice grains. Simple side dishes are served with gomtang — Kkakdugi, kimchi, and thinly-sliced green onions. Kkakdugi, always pairing well with gukbap, is made of Jeju radish, Korean sea salt, and saeu-jeot. It’s a Seoul-style kimchi, and you can mix its spicy soup with gomtang as well.
Address Hadongkwan Myeongdong, 12 Myeongdong 9-gil, Jung-gu, Seoul
Inquiry +82-2-776-5656
Hours 07:00~16:00, Closed on Sundays
Homepage www.hadongkwan.com

A Plateful of German Pastries
The Baker’s Table
Located between Noksapyeong Station and Gyeongnidan-gil, the Baker’s Table is a German bakery cafe run by German chef Micha Richter. Deemed a senior member of Itaewon, it is famous among foreigner residents. The interior has a European bakery-style design. On a mint-colored shelving, a variety of German pastries are displayed. German bread is known for rich aroma and flavors, using rye, oats, mixed grains, and seeds in the dough which goes through the yeast fermentation process. The Baker’s Table serves bretzen, German rye bread often considered a meal substitute, and salty heart-shaped bretzel with a chewy texture that is freshly baked at 6AM every morning. 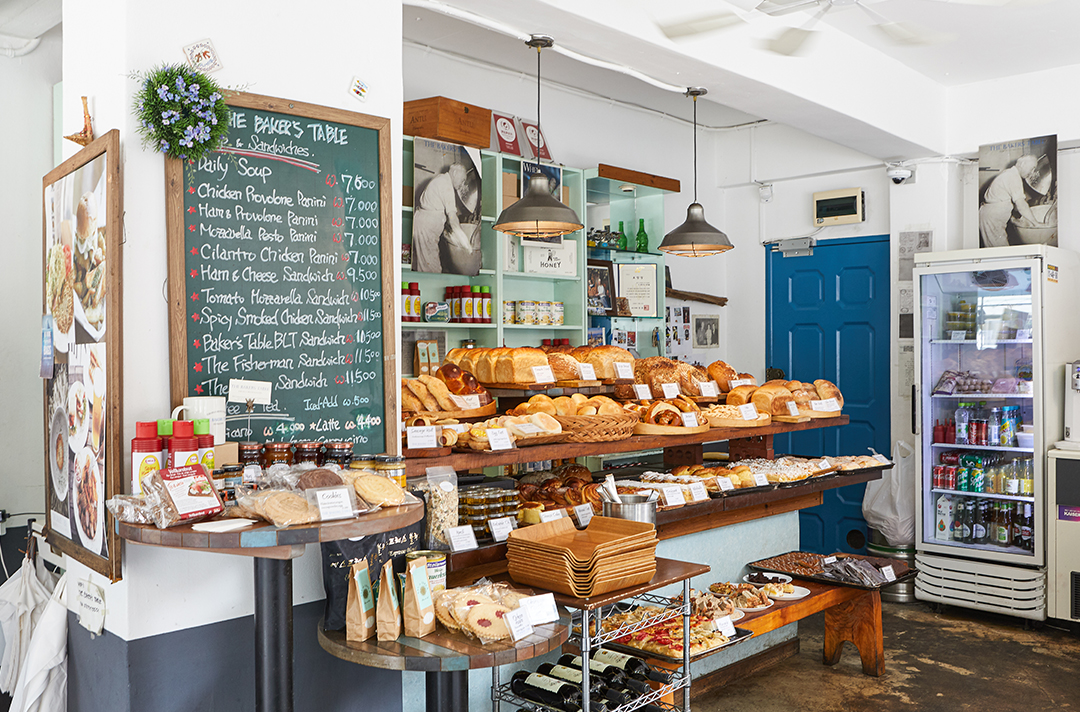 A mouth-watering display of pastries at The Baker’s Table 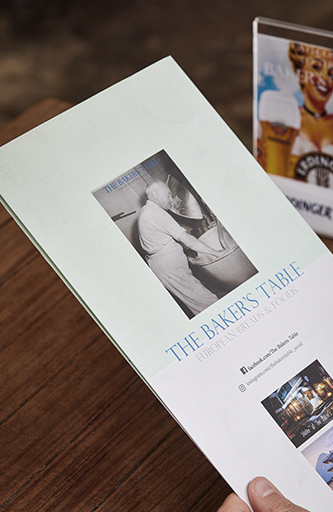 Menu at The Baker’s Table 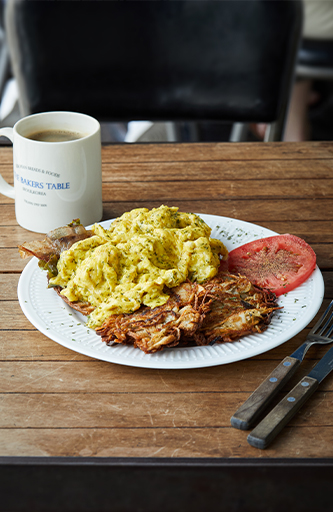 The Farmer, the signature breakfast dish 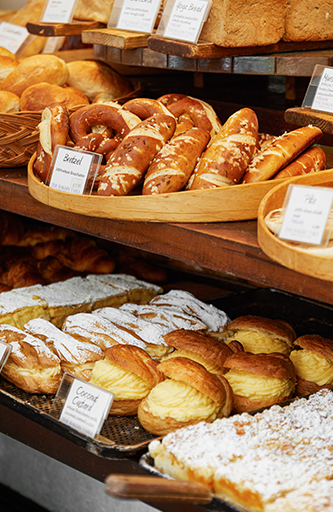 A German-style breakfast generally involves the combination of bretzen, jam, honey, and cheese. If you plan to visit the Baker’s Table, however, we recommend that you give a try to the breakfast menu developed by the chef. The Farmer, served with house hash-browns, rye bread with bacon and dijon mustard, scrambled eggs(you can choose one between sunny side up, over easy, and scrambled) on one plate, is popular. Along with the breakfast menu available from 8AM to 1PM, the Baker’s Table has a variety of all-day dining menu offering German favorites such as bratwurst, currywurst, and Jagerschnitzel, and side menus like soup to go with a meaty main dish. “I thought how wonderful it would be to have a place to visit in the morning for a good meal.” As the chef said, the Baker’s Table provides delicious food and pastries from morning to night.
Address The Baker’s Table Gyeongnidan-gil, 244-1 Noksapyeong-daero, Yongsan-gu, Seoul
Inquiry +82-70-7717-3501
Hours Everyday 08:00~21:00
Homepage www.thebakerstable.co.kr

Standard Korean Toast
Isaac Toast
Toast is a comfort food to many Koreans as it has been filling the stomachs of students and office workers who do not have time to have breakfast at home. Isaac Toast is the most popular toast brand in Korea. Having begun as an independent store in 1995, it has grown into a business chain with more than 800 franchise shops. It is not an overstatement to say that Isaac Toast is considered standard Korean-style toast. The recipes for its steady-sellers, ‘ham cheese toast’ and ‘ham special toast,’ go like this: Butter and toast sliced bread until golden. Spread the patented special sauce on the bread, and put grilled egg omelette with corn on the bread, and layer sliced ham and sliced cheese for the ‘famous ham cheese toast.’ Add thinly-sliced cabbage to this, and you have made yourself a ‘ham special toast.’ Sweet and savory Isaac Toast has been also popular among tourists. Before the COVID-19, Isaac Toast Myeongdong branch always had a long waiting line in the already-crowded streets of Myeongdong. In 2016 Isaac Toast held a pop-up store event in Taiwan, before the official store launching, and the waiting line that began on the second floor where the store was continued down to the first floor, and even made the headlines on local news media. 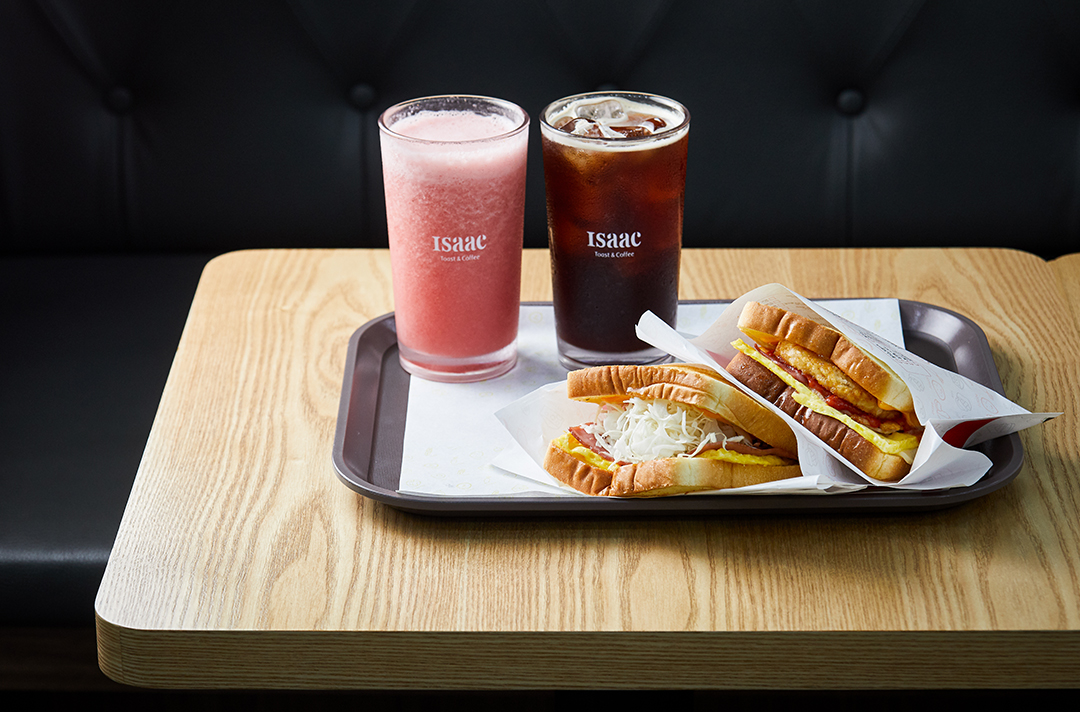 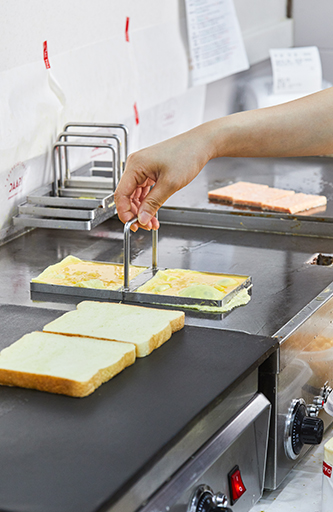 When eating in, toasts are cooked to order. 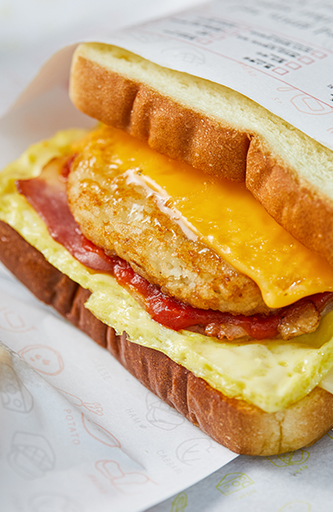 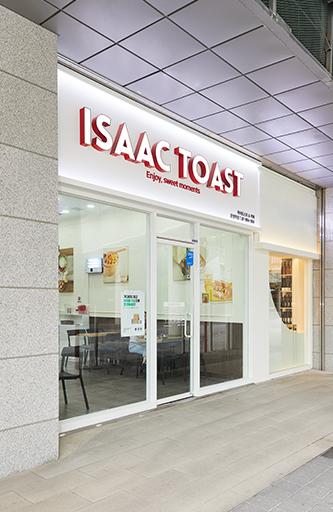