It's the Golden Age of Donuts in Seoul!
Donuts are the most sought-after desserts in Seoul right now. We have carefully selected one-of-a-kind donut shops with the principle of the same-day production and sale. These donuts will make your trip much sweeter.
Dreaming of Representing Korea, Old Ferry Donut
Old Ferry Donut is a donut specialty shop that introduced yeast donuts(using a dough that went through over 12 hours of low-temperature fermentation) to Korea for the first time. CEO Choi Min-yi had traveled across the United States looking for great donuts after getting inspired by the texture and flavor of the donut she had in New York. She created a donut brand presenting flavors that could appeal to the Korean palette and the product packaging with Korean folk paintings(‘Hojakdo’ depicting tiger, magpie and pine tree) on it. 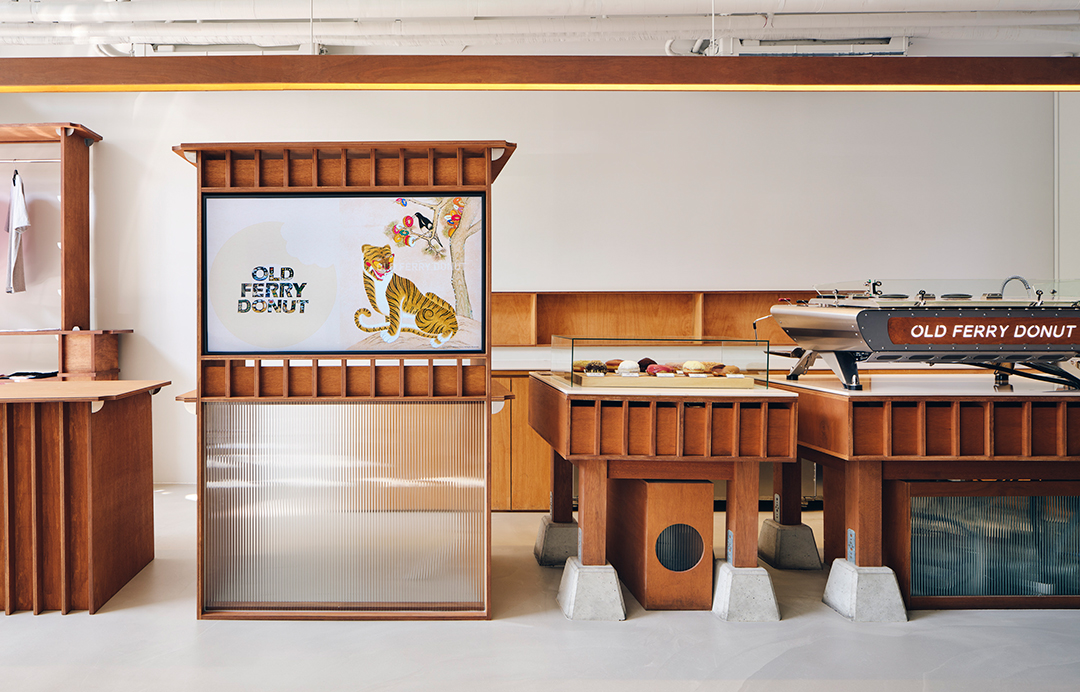 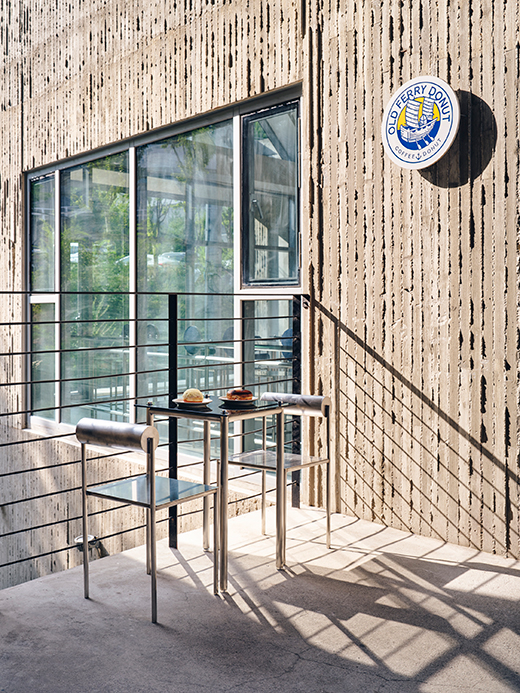 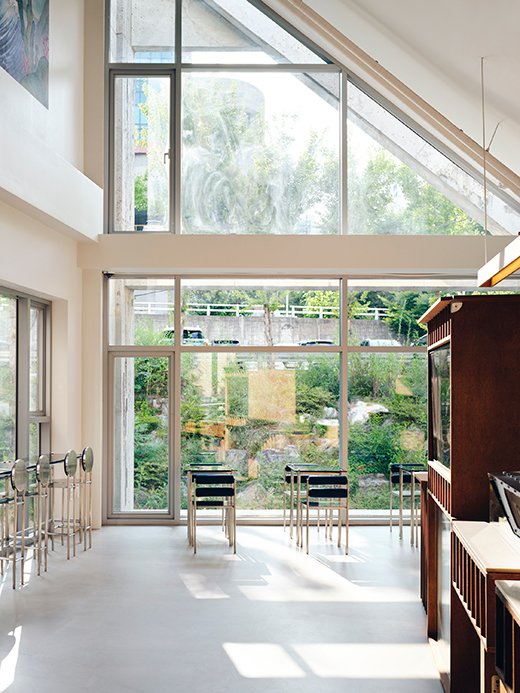 All ‘Old Ferry Donut’ products have fillings and heavy feels to them because Koreans tend to like cream bread. One donut from the shop, with its balanced combination of glazing, filling and crust, offers a feeling of and physical fullness comparable to having a piece of cake. Having opened in December 2017, Old Ferry Donut still maintains its popularity and has customers form a waiting line outside the shop. Packaged room-temperature donuts need 15 seconds and refrigerated donuts 20-25 seconds of microwaving to revive the brand’s signature flavor and texture that melts in your mouth. 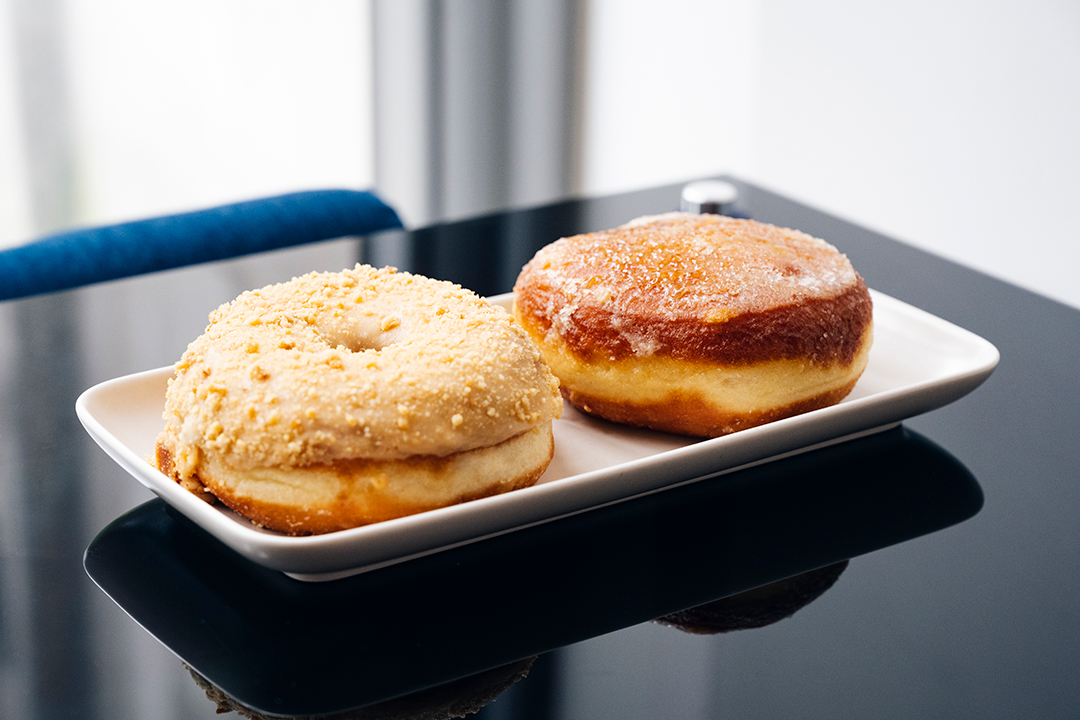 (Left) Peanut Butter Donut | It boasts a thick fan base for its flavor that is ‘likable even by those who do not appreciate peanut butter.’ According to the crew at Old Ferry Donut, they were certain of positive feedback after making the donut that captivated those who had been skeptical of the outcome. It has all the qualities of peanut butter—sweet, savory and creamy, while its crust perfects the texture.
(Right) Creme Brulee Donut | Its texture is crisp thanks to the caramelized sugar coating and fresh custard cream homemade each day fills the donut. The filling has a reduced sweetness to balance out the sugariness of the caramelized surface. The Old Ferry’s signature donut shatters the assumption that ‘donuts are sweet’ despite its luscious look.
Address 2F, 66 Hannam-daero 27-gil, Yongsan-gu, Seoul
Inquiry +82-2-6015-2022
Instagram www.instagram.com/oldferrydonut

New Realm of Cream Donuts, Knotted
At 9AM, the showcase of Knotted Cheongdam is stocked with adorable donuts and cakes. The shop’s busy with customers carrying donut boxes with smiley faces(The shop’s signature logo carries a message about delivering happiness through desserts) on them. Having started the creamy donut trend, Knotted is a dessert shop focusing on donuts, cakes, and other pastries like croissants. The clean-tasting, fluffy bread contains generous amounts of various flavored cream including vanilla, earl grey, and chocolate. 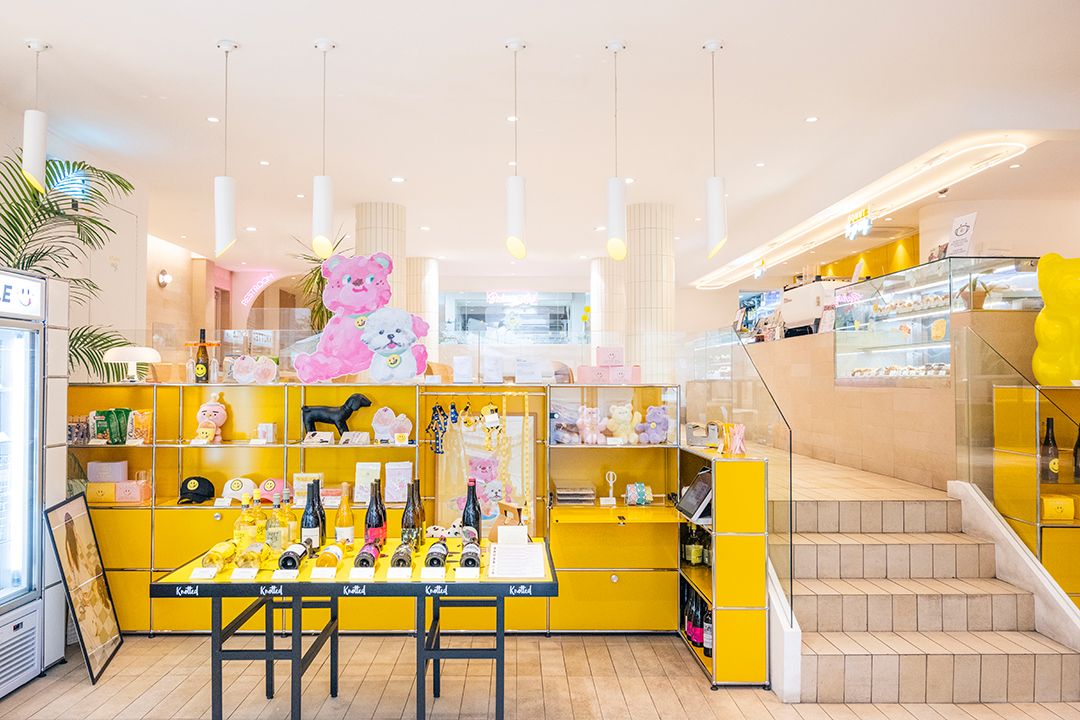 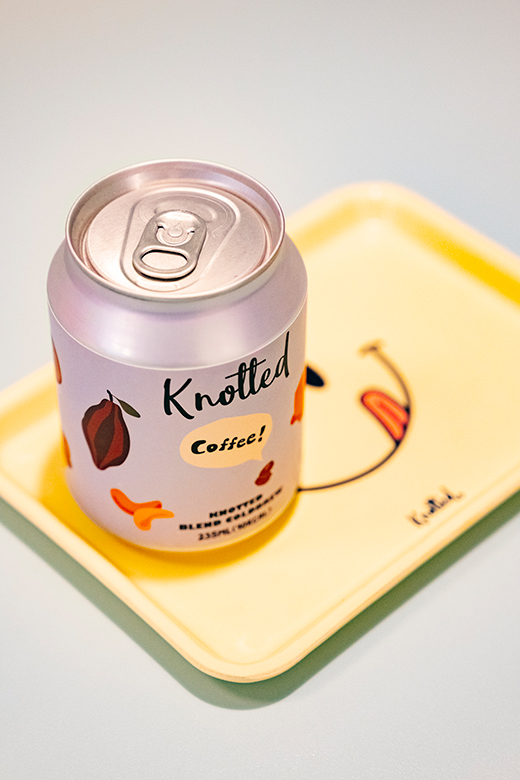 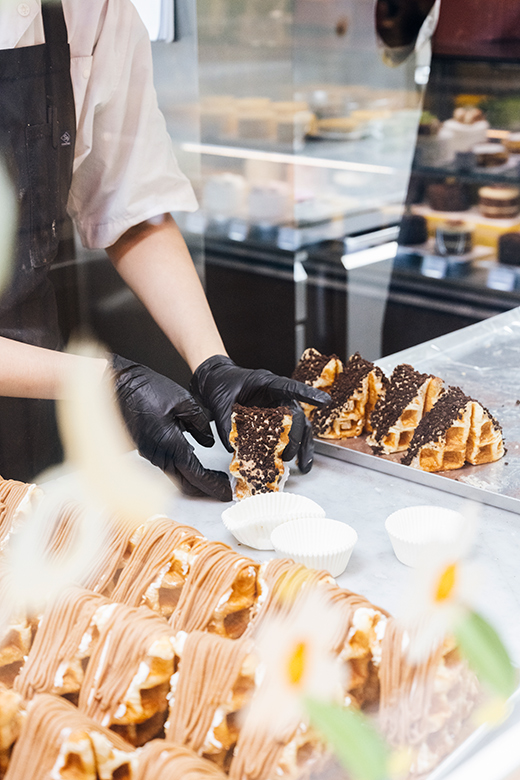 Thanks to the appearance resembling the chapssal(glutinous rice) donut, Korean comfort food, and mildly sweet cream, Knotted donuts are popular among all ages and gender. Fortunately the shop has branches across Seoul and Jeju. In particular, Knotted Jeju features local specialty menu such as Jeju Green Tea Donut and Knotted Seongsu offers Ice Cream Donut, making it fun for loyal customers to tour around different branches. Knotted donuts are best when consumed immediately at the shop. We recommend enjoying the donut with cold brew coffee or citrusy ades in cute cans. 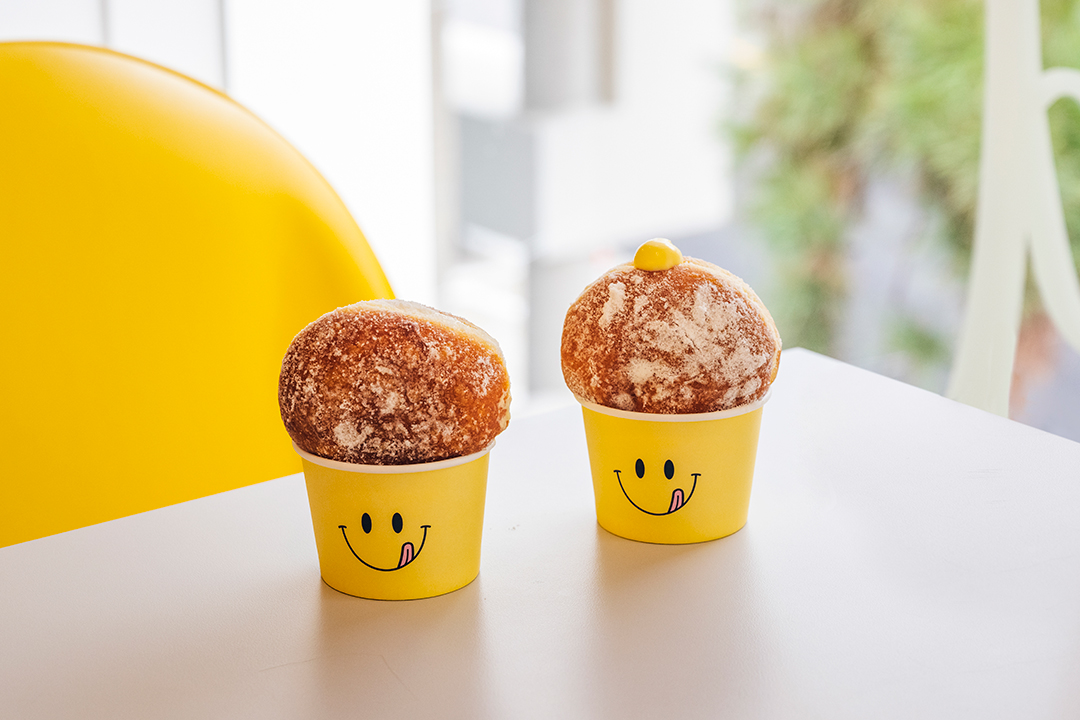 (Left) Milk Cream Donut | Represents the style of Knotted. The same fresh milk cream is used in cakes and croissants sold at Knotted. White, foamy milk cream is filled to the brim in a donut cut open in half. One bite will surely leave a mustache around your lips, but not to the point that it feels too much. Just the cream alone is also tasty.
(Right) Classic Vanilla Donut | Vies for the best-seller spot with Milk Cream Donut. Full of rich vanilla-scented choux, the crust and filling combo brings a harmonious flavor and texture. It is almost universally liked.
Address Knotted Cheongdam, 15 Dosan-daero 53-gil, Gangnam-gu, Seoul
Inquiry +82-70-8860-9377
Instagram www.instagram.com/cafeknotted

Rediscovering Vegan Donut, Overte
A clean white building with a green awning looks like a high-end cookie shop but houses a donut specialty bakery selling what they termed ‘Guilty Pleasure for Vegan.’ CEO Kim Ae-ri previously worked in restaurant menu consulting and launched Overte, the vegan donut brand, after realizing the absence of it in Korea. Overte uses plant-based materials such as soy milk and coconut oil in donuts, instead of animal-based materials such as eggs, milk and butter. It is almost impossible to tell the difference between Overte donuts and regular donuts unless you are told about the vegan option. 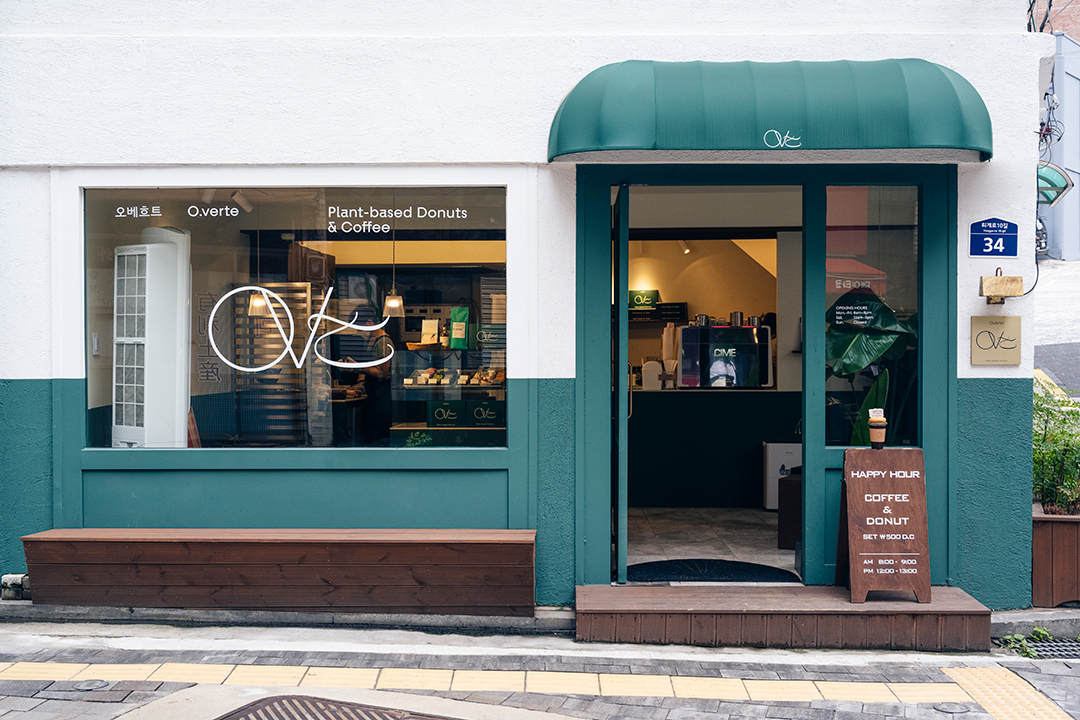 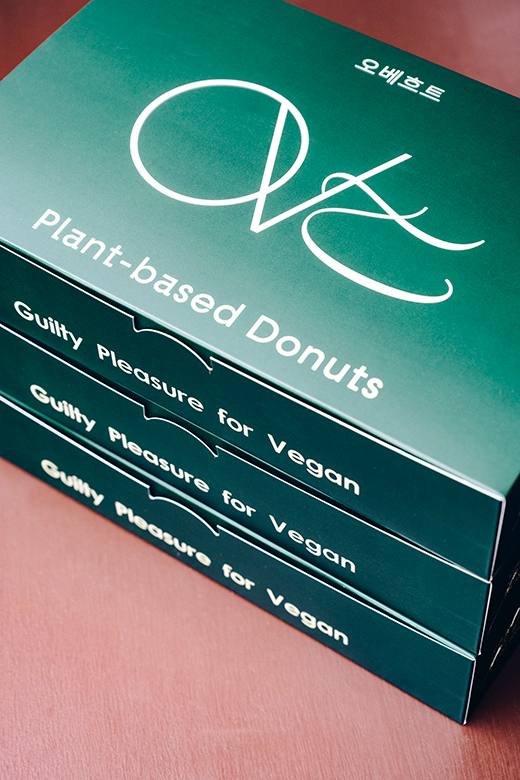 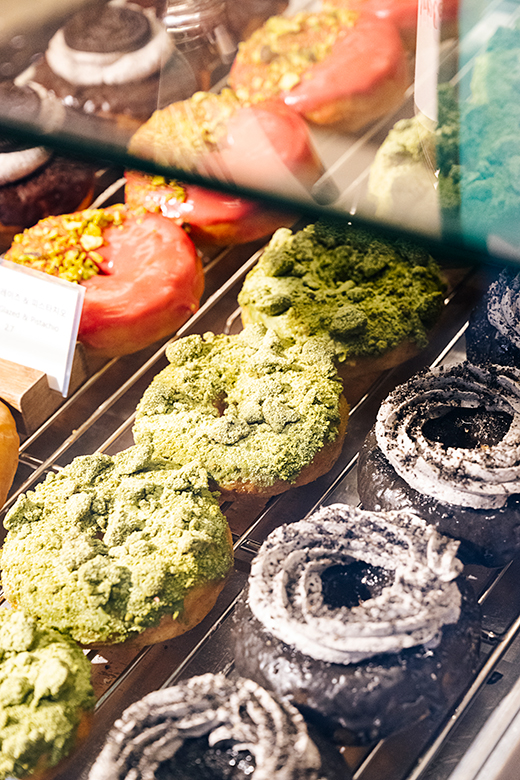 Kim’s effort to fine-tune each step in donut-making including the fermentation process of the dough, temperature and ratio of ingredients has paid off. Kim said, “Vegans can also feel a gustatory pleasure,” and Overte donuts fall exactly under that category. Vegan or not, we recommend the donut to those who want to try something new. Have a box of Original Glazed Donuts in the freezer and cook them in a waffle-maker like with a croffle. It will be a memorable experience. 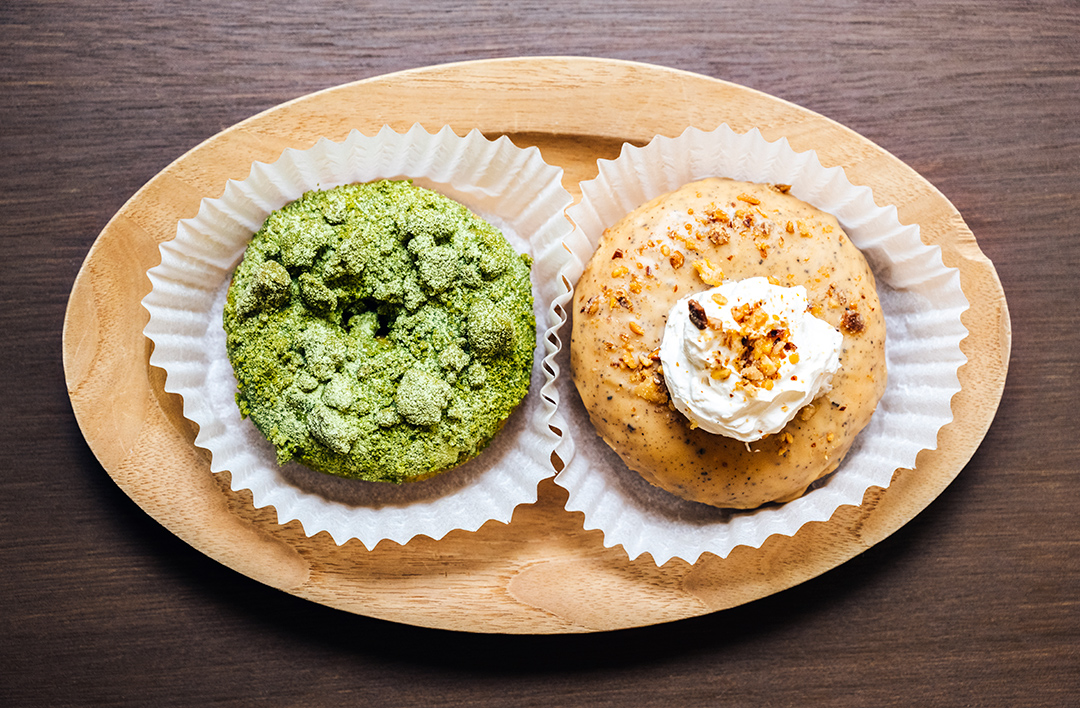 (Left) Malcha Glaze & Crumble Donut | A dark glaze made from organic Jeju malcha is put on malcha crumble. The donut’s crumbly texture is appealing and the malcha scent is not overwhelming, making it a doable challenge for beginner malcha drinkers.
(Right) Earl Grey Almond Donut | It’s the No. 1 seller at Overte. A fragrant earl-grey glaze is mixed with savory almond cream. Sweet almond brittle crunch sprinkled on top of the cream is the hidden hero of the donut. It adds chewing fun to the great flavor.
Address 34, Toegye-ro 10-gil, Jung-gu, Seoul
Inquiry +82-2-6084-6404
Instagram www.instagram.com/overte_donuts

Can-Be-Anything Donut, Awesome Donut Seoul
“I wanted to give people an experience of amazing flavors.” Head over to Awesome Donut Seoul if you are up for tasting the most unique donuts in Seoul. CEO Kim Hyun-soo is using never-heard-of ingredients in donut making to present one-of-a-kind donuts. After a donut experience during a trip to Japan, he realized for the first time that donuts can be food, rather than just a sugary dessert. With a tendency to find a balance in unexpected combinations, Kim creates ‘universally likable’ donuts, using some extreme ingredients such as avocado, red pepper paste, bacon, mint chocolate, and red bean. The soft, chewy bread itself is delicious, so try out as many varieties as possible in terms of cream or topping. 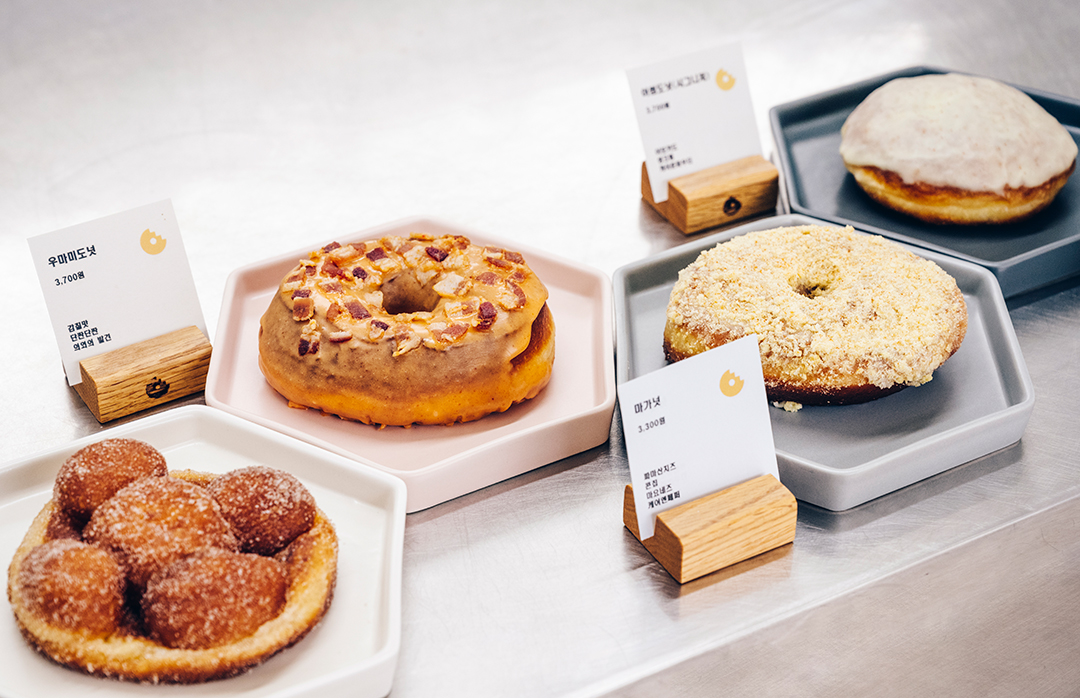 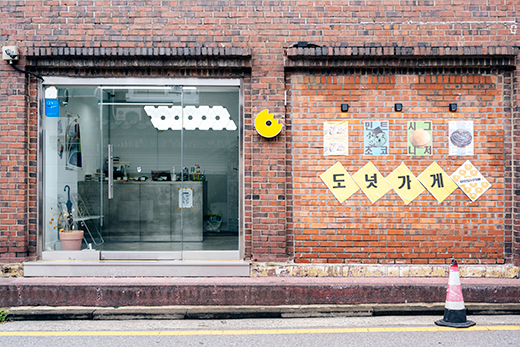 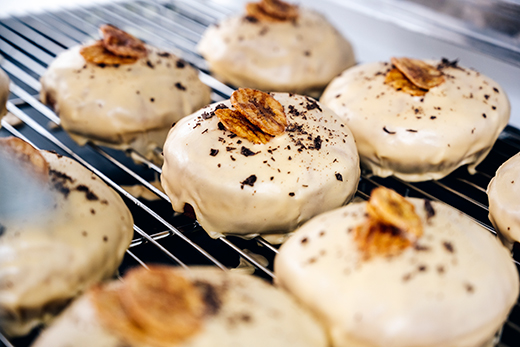 Kim first opened the shop in 2019 in Hapjeong-dong and has run it on his own until mid September. Currently, he is having a little break, recharging himself and preparing for a reopen. Updates on Awesome Donut, slated for reopening between the end of this year and the beginning of next year, can be checked on the shop’s Instagram. Look forward to the fresh, extraordinary donuts he will bring to us when he returns. 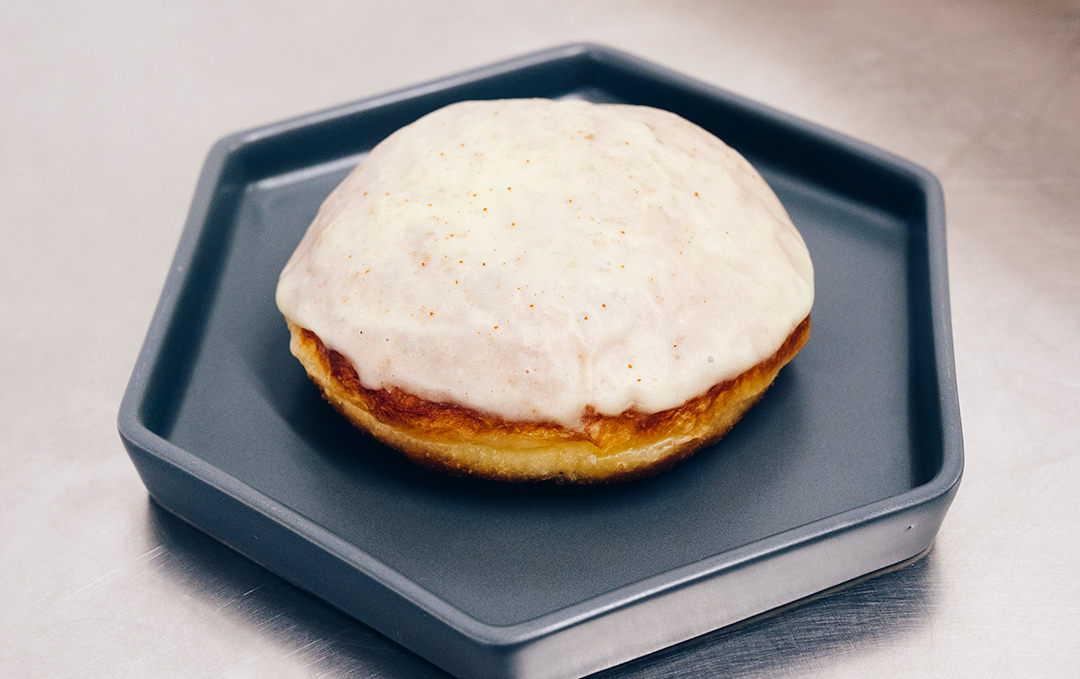 Awesome Donut | The filling is avocado cream. As can be guessed from the name, it is the signature donut of Awesome Donut Seoul. The donut was inspired by the avocado dessert in the thickness of ice cream that he had made in the past. Avocado makes the cream softer. For your information, Awesome Donut products are most enjoyable as cold desserts after refrigeration, instead of eating them directly after they are made. We recommend you give 30 minutes for donut refrigeration before munching them.
Instagram www.instagram.com/a.d.seoul_

Fancy Twisted Korean Donuts, Bontemps
In my childhood, my favorite snack was twisted Korean donuts, also known as kkwabaegi, sprinkled with sugar that my mom used to buy for me at a marketplace. The nostalgic snack has been transformed by Bontemps. Located on Songnidan-gil in the vicinity of Seokchon Lake, the popular dessert shop specializes in Korean-style twisted donuts made with care, using a natural fermenting agent instead of regular glutinous rice. CEO Lee Sang-hoon emphasizes the importance of dough as the donut base. He adjusts the cooking temperature depending on the weather condition in order to produce a consistent flavor. 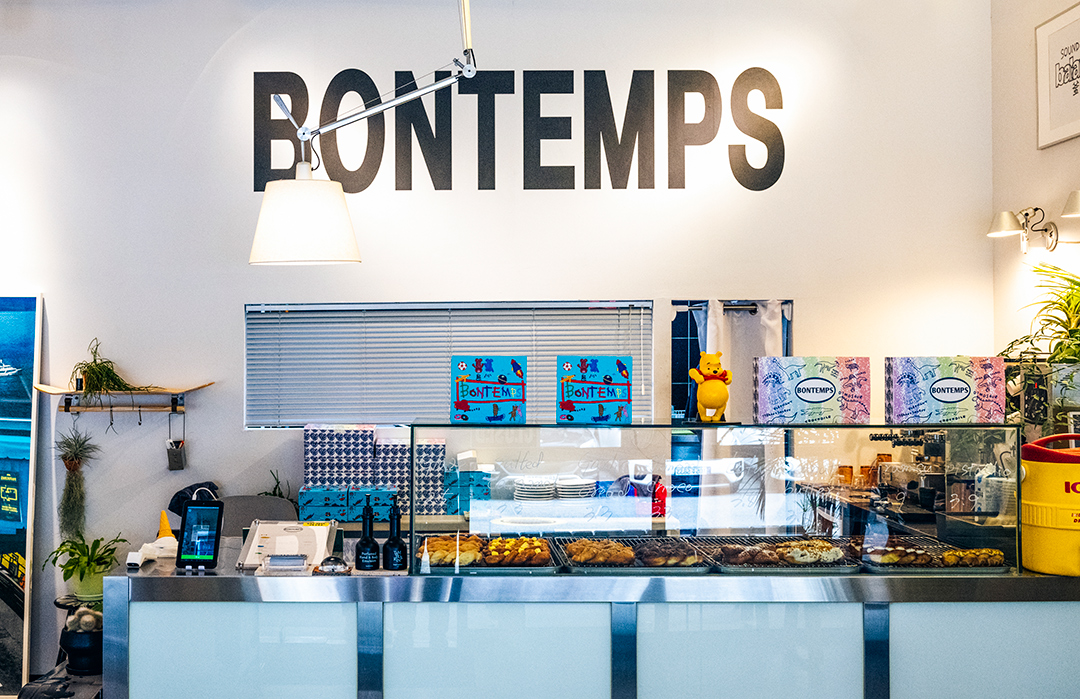 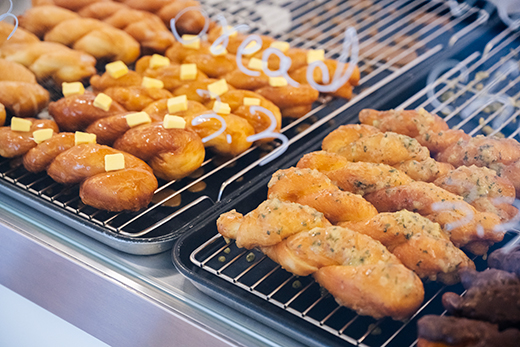 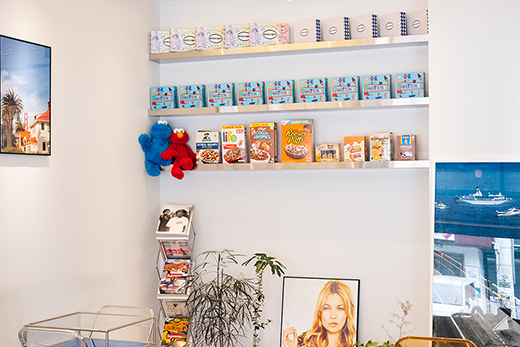 Once you start debating whether to get salted caramel, garlic bread, Lotus, or pistachio flavored donut, the time quickly flies. Just like ‘Bontemps’ means good time in French, the shop’s interior decor using stylish props creates a cozy ambience for you to sit down with a cup of coffee and relish fresh kkwabaegi. 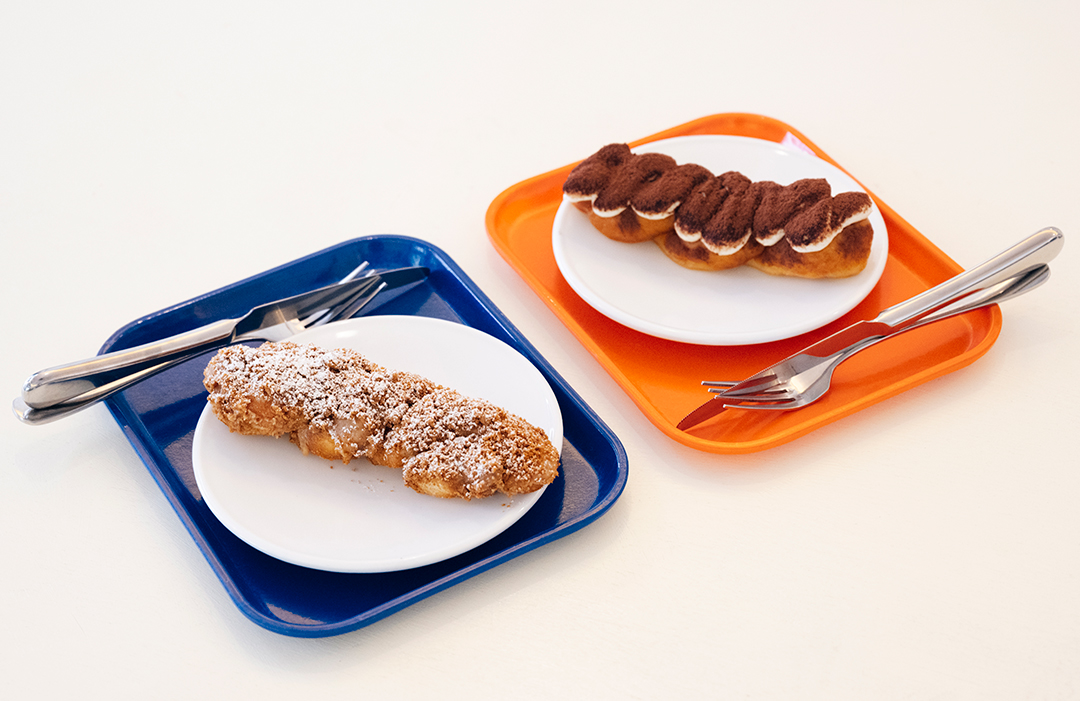 (Left) Lotus Donut | How about putting Lotus jam on kkwabaegi? You can deal with that curiosity at Bontemps. Spread Lotus jam, dubbed the ‘Devil’s jam’ for its addicting flavor, on kkwabaegi and add Lotus Biscoff crumbs as a crunchy topping.
(Right) Tiramisu Donut | The most sought-after donut at Bontemps. The soft texture of kkwabaegi and tiramisu cream made by Bontemps are paired. Tiramisu cream is produced a day before to age overnight, which brings out a fuller, more acidic taste in donut.
Address 42-8, Baekjegobun-ro 41-gil, Songpa-gu, Seoul
Inquiry +82-10-8821-7769
Instagram www.instagram.com/bontemps.seoul

Cronut Charms Social Media, Beebeede
This is the place if you have been looking for the trendiest dessert shop on Garosu-gil in Sinsa-dong. Seriously orange-colored with a kitschy decor, Beebeede sells the ‘cronut’ which is a blend of croissant and donut. CEO Park Sun-ji revived the pastry that was once popular about 7-8 years ago, in her Seoul shop. Born in the hands of New York-based pastry chef Dominique Ansel in 2013, the cronut was so popular that people would line up in front of Ansel’s bakery before the sunrise. Instead of a donut dough, a croissant dough filled with flavored cream is fried in oil and garnished with various toppings. It is notorious for its labor-intensive making process which takes four days from kneading to molding. So the rise of Beebeede in Korea’s dessert scene requires a high-five. 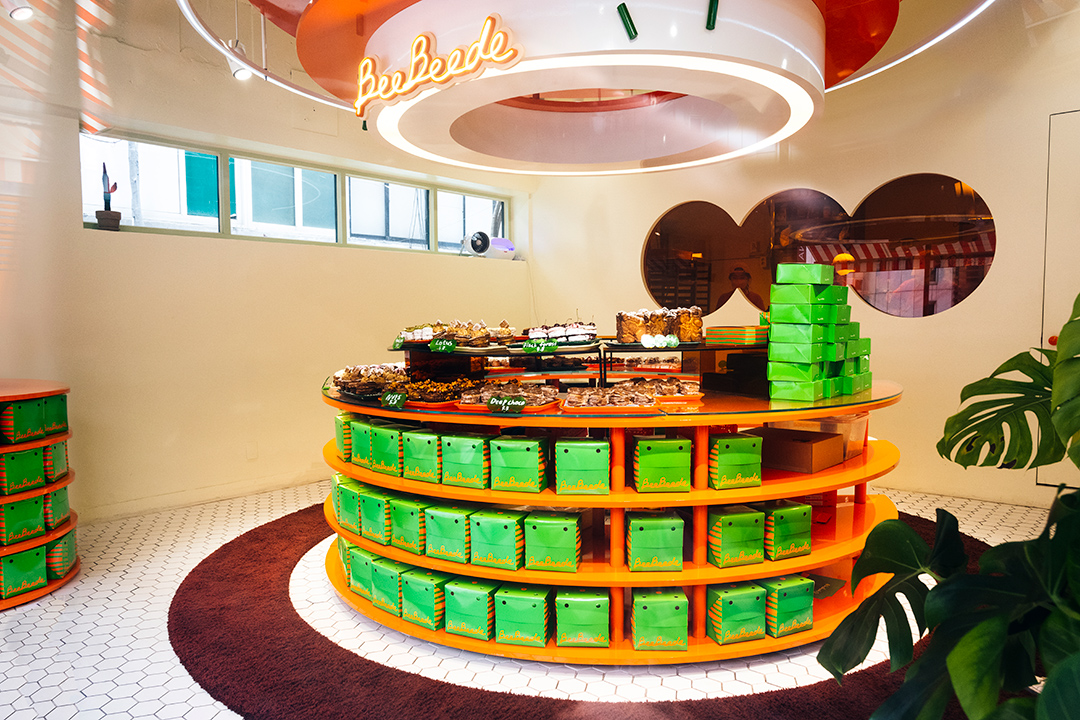 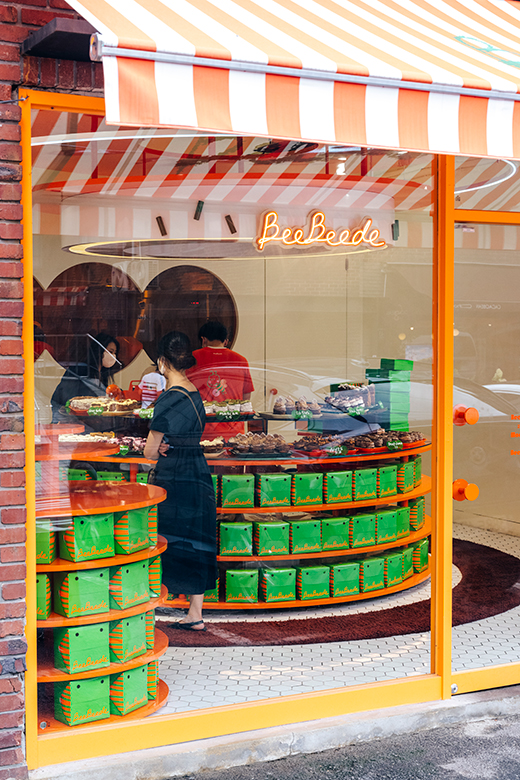 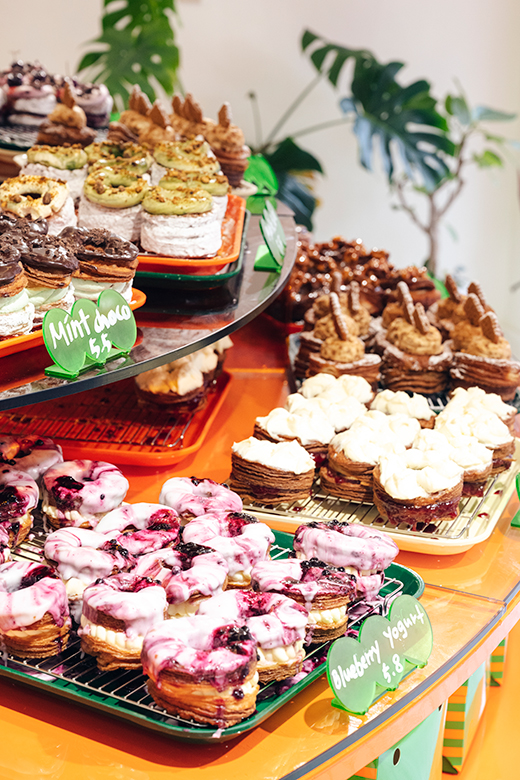 We are once again given a chance to enjoy the demanding dessert more easily. Originally popular in the United States, Korean-style cronuts have been tailored to the Korean palette by, for example, adjusting the ratio of butter in the dough. Add milk cream, strawberry jam, cream cheese and blueberry yogurt. To truly feel the texture of numerous layers formed in the croissant dough used by Beebeede, we recommend that you hold the cronut in one hand and take a mouthful. 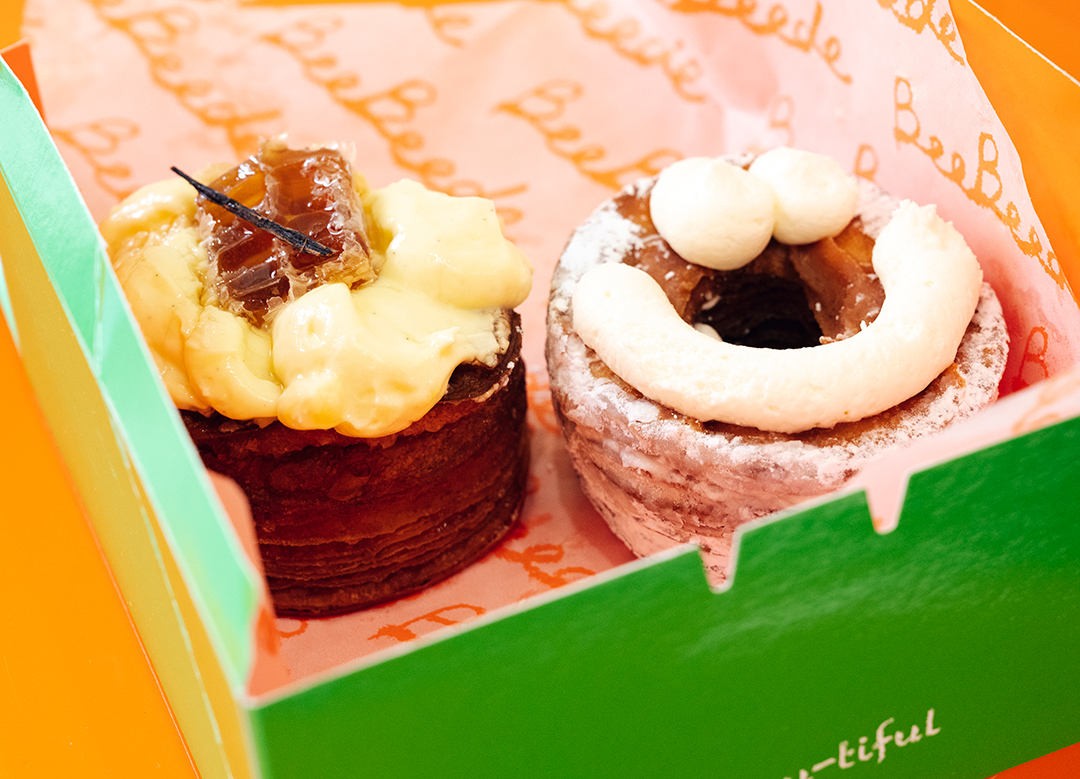 (Left) Honey Beebee | A beehive on top of custard cream makes you bring out your camera. Honey is used in cronut-making, fitting for the name Beebeede. It’s surprisingly less sweet than other cream-filled cronuts. Beebeede products exclusively use honey from a honey farm in Cheorwon, Gangwon Province. The same honey is also sold at the cronut shop.
(Right) Milk Cream | It is the signature cronut of Beebeeded. Milk cream is used to draw a smiley face on top of a cronut. The sweet, refreshing milk cream seen through the croissant-dough layers is appetizing.
Address 44, Dosan-daero 17-gil, Gangnam-gu, Seoul
Inquiry +82-10-8287-3711
Instagram www.instagram.com/beebeede_cronut