Teahouses in Spring
More and more people are choosing tea over coffee. We visited three teahouses in Seoul that can cater to different tastes and sensibilities.
Tea is the best-selling beverage in the world, ahead of soft drinks, beers and even coffee.
To Brew and Sell Tea
Most of recorded or oral histories of tea originate in China , the world’s first known monograph on tea written by the Tang Dynasty writer Lu Yu at age 33, contains parts on the origin of tea. Shennong, the “Divine Farmer,” was trying to separate herbs from poison by sampling all sorts of plants. He ended up taking 70 poisons and fell unconscious. Then a green leaf floated through the air and landed on his lips. Shennong regained his consciousness. Shennong gave the name ‘cha’ to that mysterious tree from which the leaf dropped.
Tea is called by different names in different parts of the world. In Guangdong Province in China, one of the biggest producers of tea, it’s called ‘cha.’ In another producer, Fujian Province, the pronunciation is closer to ‘tea.’ Guangdong mostly exported tea by land, while Fujian did so by sea. For the same reason, Western European countries that imported tea by sea came to call the beverage ‘tea.’
In Korea, tea consumption per capita isn’t even one-tenth of that in Japan and, not surprisingly, trails the figure in China by a wide margin. But teahouses in Korea are gaining popularity. We introduce you to three teahouses known for their menus, expertise and special vibes.
WH Tea, Pu-erh Teahouse in Historical Setting
WH Tea, which specializes in pu-erh tea, is located in Bukchon. It’s a neighborhood where time has stood still, and the teahouse stands at the embankment that has been in place for some 120 years, at the corner of the lot once occupied by Kyunggi High School. The name of the place seems to reflect the passage of time in the area, too. 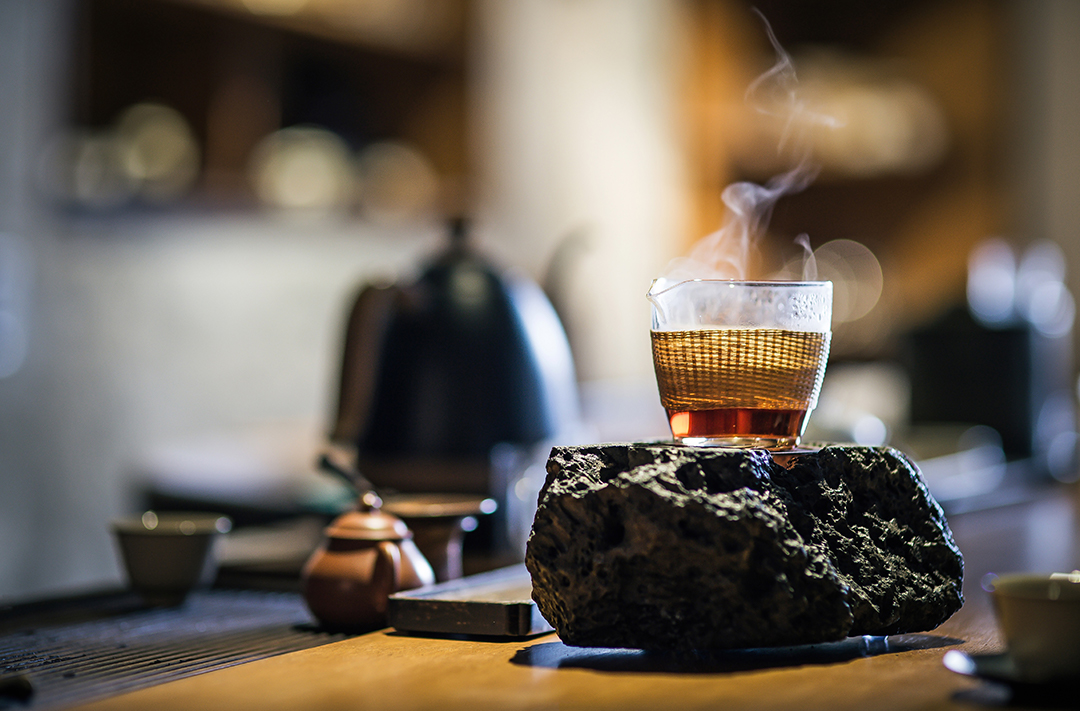 Teas we drink can be divided into six categories, depending on how they are processed or fermented: green tea, white tea, blue tea, yellow tea, black tea and dark tea. Pu-erh tea is a type of dark tea. Only those produced in China’s Yunnan Province can be classified as pu-erh teas. Think of champagne, and how only the sparkling wine made in the Champagne region in France can have that distinction. A pressed pu-erh tea cake typically weighs 357 grams.
Pu-erh teas are either naturally fermented or artificially ripened. But the artificial process doesn’t involve any additives. You just have to put tea leaves in an environment where they can ripen quickly. This type of pu-erh tea can produce the rich flavor of the naturally-fermented tea in a relatively short period of time. It’s a great choice for beginners. 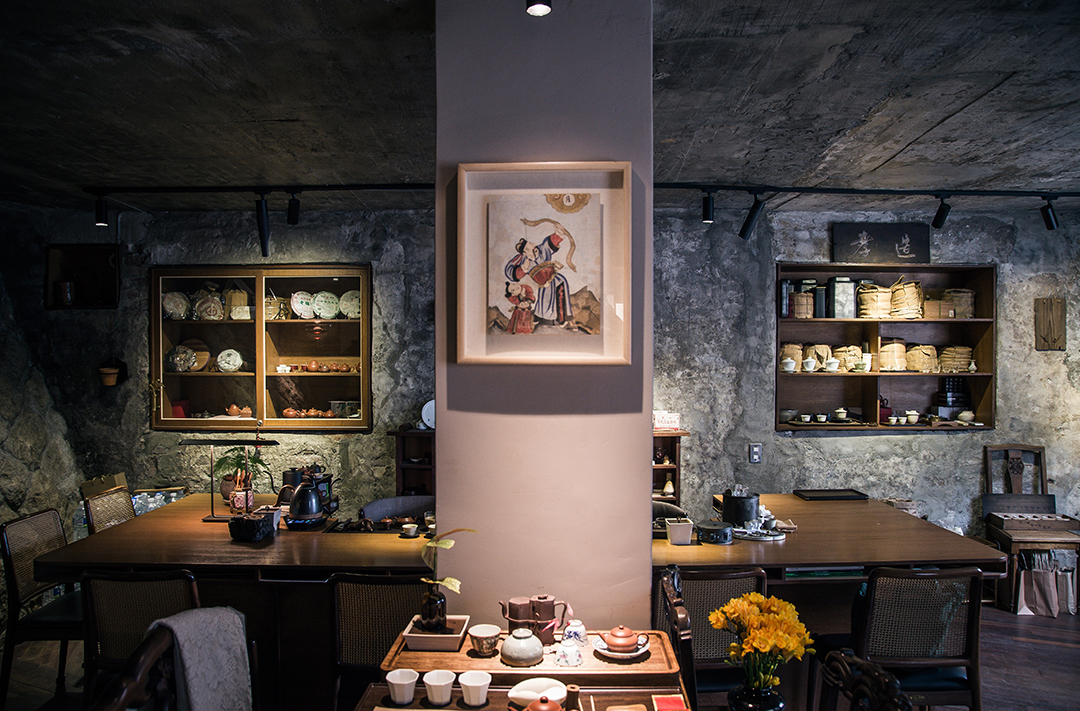 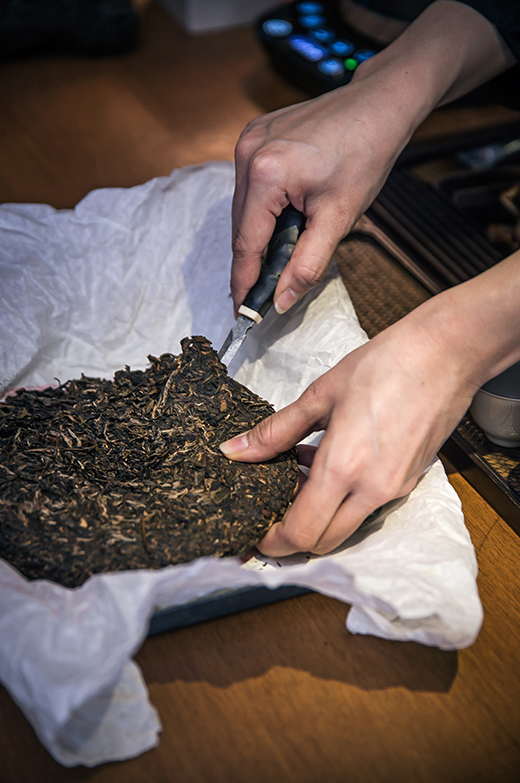 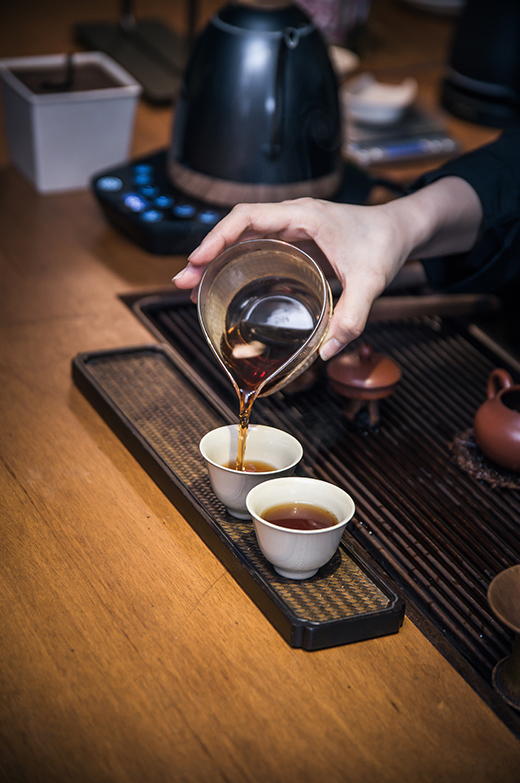 While WH Tea is a place for pu-erh tea, it also offers green tea, white tea and dark tea, catering to different preferences for its visitors. Before serving teas, they will first ask you about your favorite types of teas and your health condition, among others.
WH Tea is by reservation only. But you can still walk in during opening hours and inquire about teas and teaware. You can sign up for one-day classes where you will get to make tea using zisha (purple clay) teapot or gaiwan (lidded bowl), or attend a tea party to fully appreciate fragrance and flavor of teas. There are also tea tasting events where you get to sample two different types of teas. Joo Eun-jae, who runs WH Tea as its main tea server, will offer guidance. Don’t let the word ‘class’ deter you, for you don’t have to actually study or analyze anything. Come with an open heart to fully enjoy pu-erh tea from zisha teapot. Those 357 grams of tea will bring you so much joy and happiness. 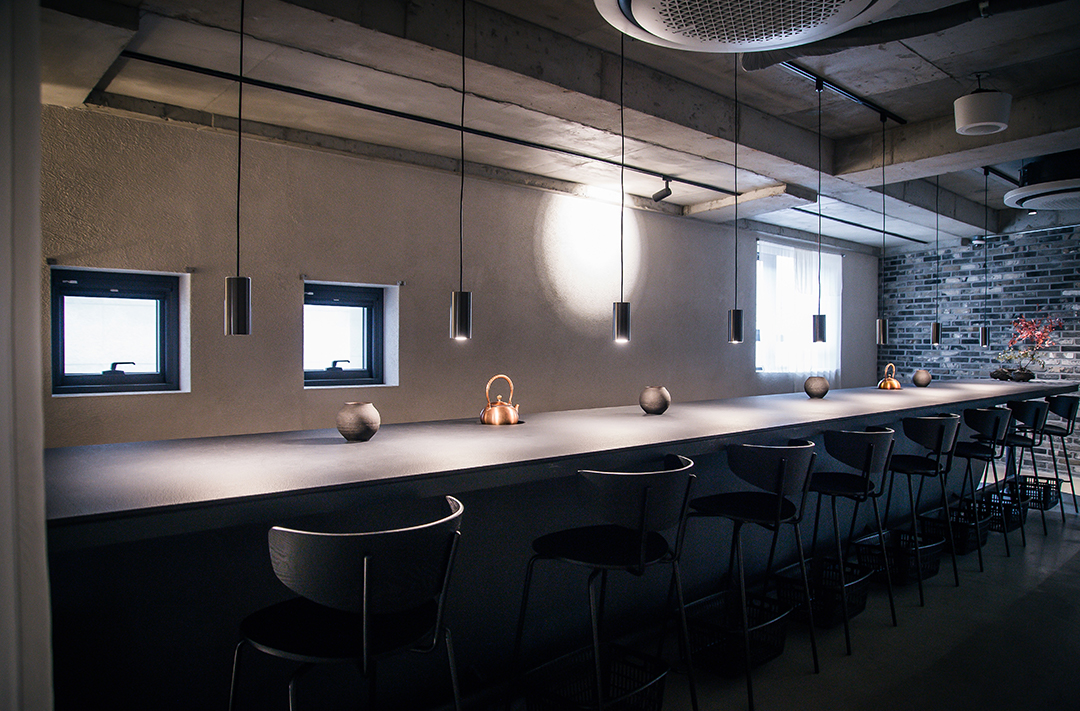 Sinsa Tearoom of Magpie & Tiger, located on a street behind the ever-trendy Garosu-gil, is the very definition of simplicity and tranquility. The founding concept of this teahouse was to start by drawing a line in space. This was to help people concentrate on teas, or rather, concentrate on their senses as they drink teas. Stones, trees and ceramics, rather than any extravagant materials, decorate the tearoom for the same reason. 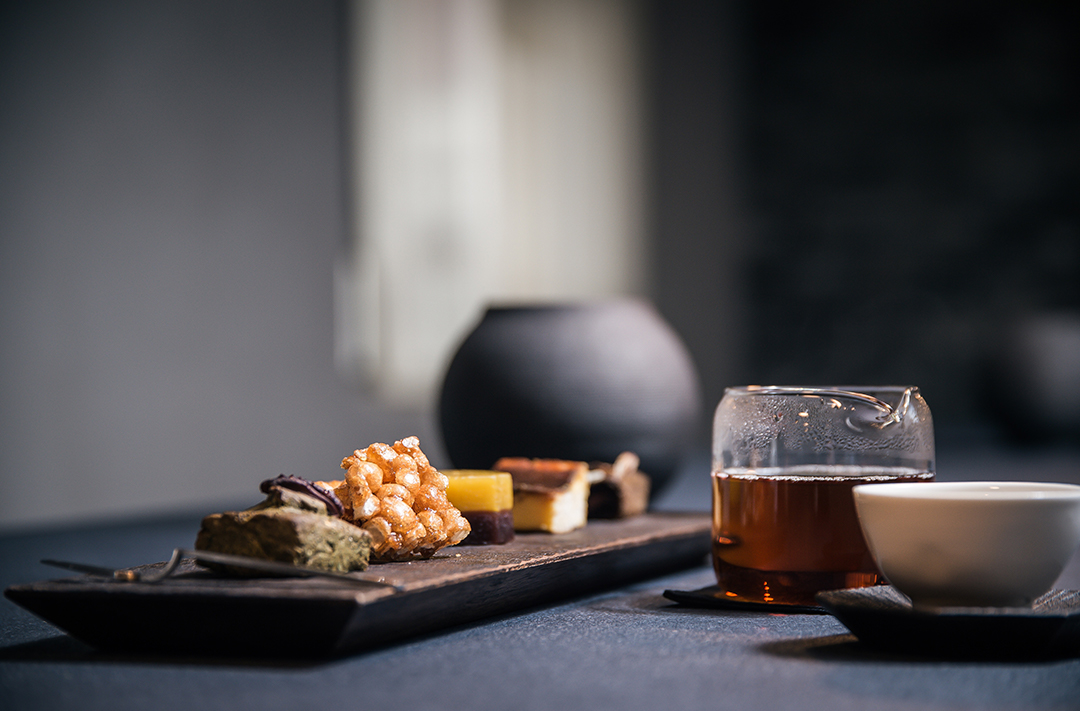 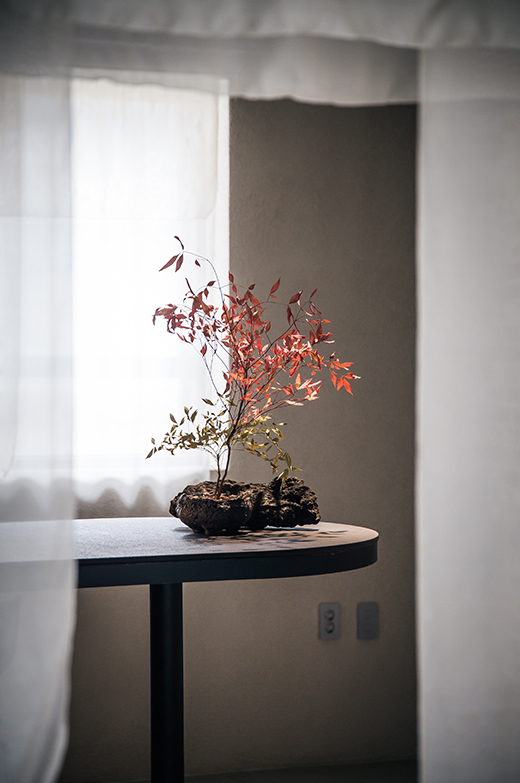 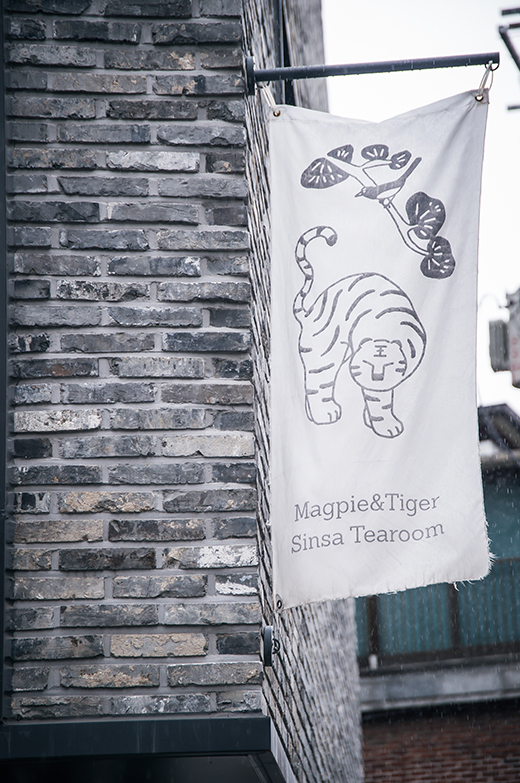 Drinking tea is considered a vastly different act than drinking coffee. It may feel like you’re acquiring some sophisticated taste. Magpie & Tiger wants to remind you that the act of drinking tea doesn’t have to involve some elaborate ritual or ceremony, and that it can put your mind and body at ease while awakening all your senses. The packaging for teas on sale at Magpie & Tiger has been inspired by the way coffee roasting brands sell their beans. The teahouse wants people to become as familiar with teas as they are with coffee. Magpie & Tiger also sells matcha beer and white tea soju, among other tea-based alcoholic beverages, plus desserts.
As more and more people are experiencing the joy of tea at Magpie & Tiger, the teahouse has been fielding offers for collaboration. It plans to open up new space, designed in a different concept than Sinsa Tearoom. It may take time to win over people’s hearts but it is all worth it in the end.

Address 2nd Fl., 44 Nonhyun-ro 153-gil, Gangnam-gu, Seoul
Hours 1 p.m.~8:30 p.m., Wednesday~Sunday (closed on Mondays and Tuesdays)
Instagram @magpie.and.tiger
Sannolu Samseong, Sincere about Teas, Collaboration
Sannolu, a teahouse located in Hangyeong-myeon in Jeju, gained popularity on social media with a wide variety of matcha beverages, desserts and signature brown bottles that give it a science lab feel. Sannolu announces on its website: “We opened ‘Sannolu’ as a place to reach out to consumers by collaborating with small and midsized farms and securing high-quality teas in small portions for quick consumption.” 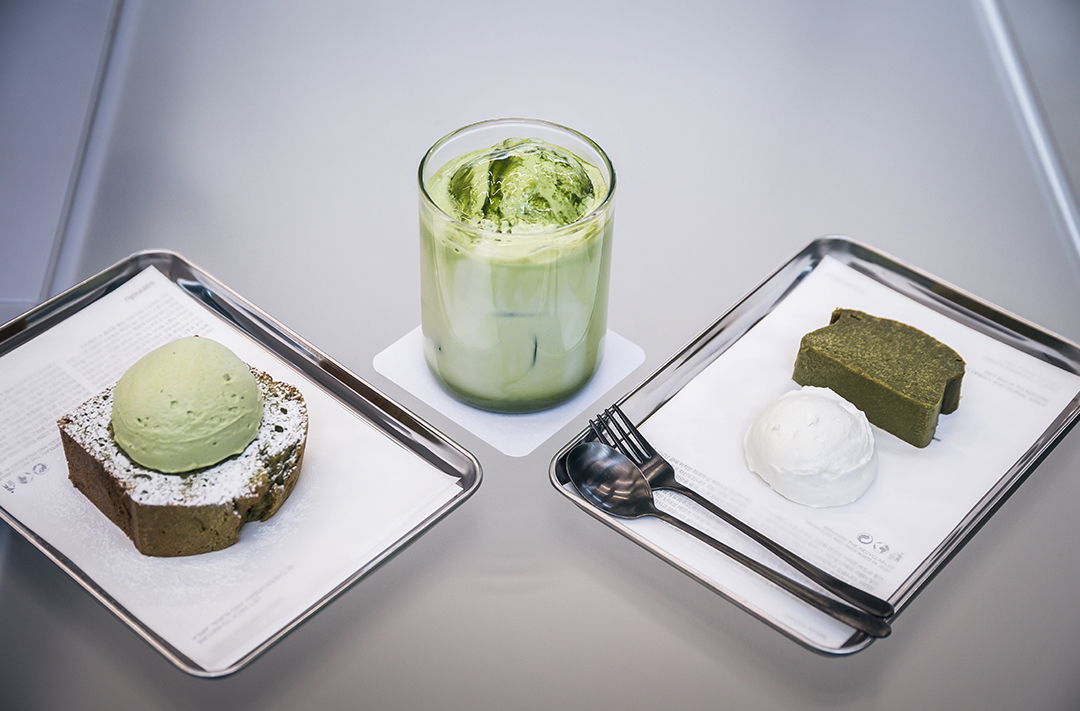 The areas surrounding Mt. Halla are among the world’s largest green tea producers, along with Shizuoka Prefecture in Japan and Zhejiang Province in China. Even Starbucks uses matcha from Jeju, but there are many smaller, no-name tea gardens in Jeju, some of which are forced to close down quietly. Lee Sang-joon, head of Sannolu and also art director at Prain Global, opened this teahouse so that he could work with tea gardens that couldn’t sustain themselves and sell green tea beverages and products in Jeju.
Sannolu and small and midsized gardens have worked together for Jeju matcha, green tea sejak (made of young leaves), Jeju hojicha (type of green tea), Jeju jade leaf tea, and Jeju blue tea. Matcha latte, matcha ice cream latte and matcha cookies, among other beverages and desserts, have helped make matcha more approachable. This is why Sannolu has become such a popular destination for Jeju tourists. 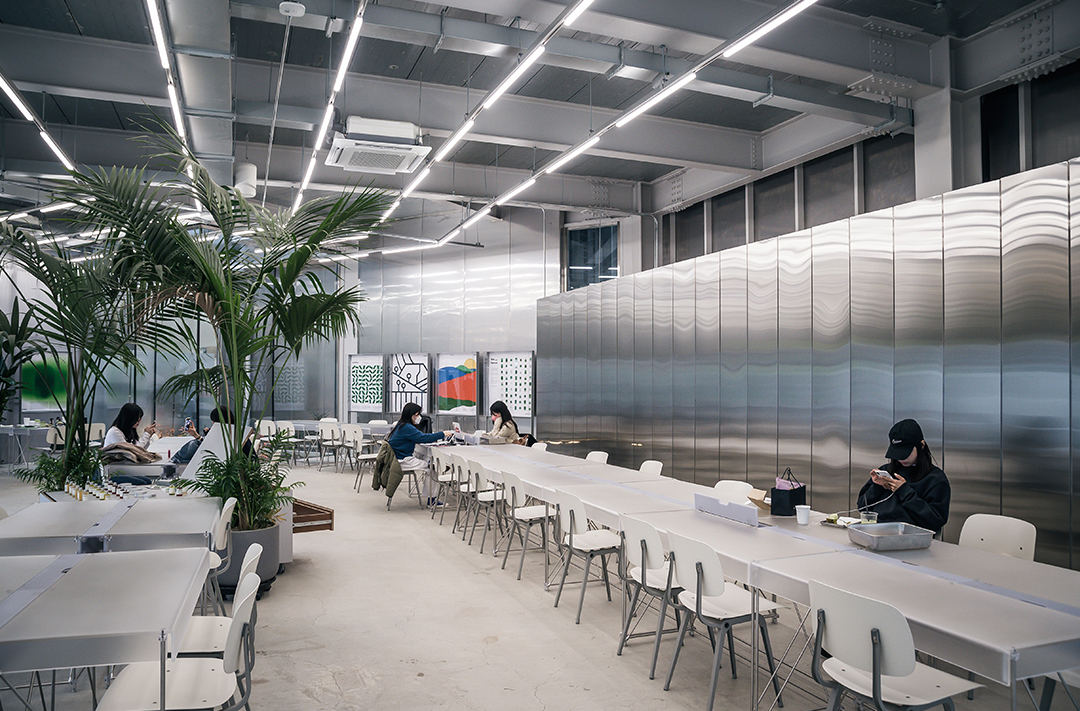 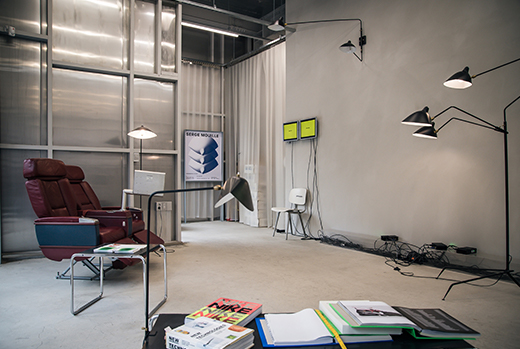 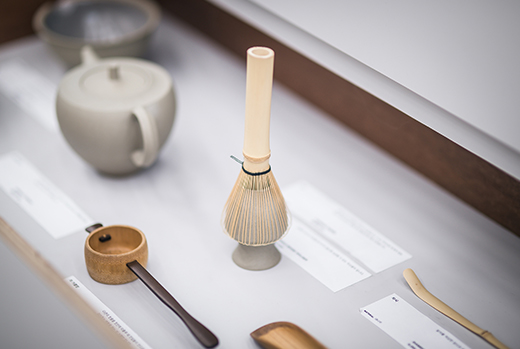 Last summer, Sannolu opened a new shop on the first floor of Prain Villa by Prain Global, a collaborator with the teahouse. The Samseong location, inside an atypical stainless building nestled among villas behind Kyunggi High School, gives off a much different vibe than the main shop in Jeju. It has a minimalistic feel with a bit of a cold touch, though small ponds and courtyard also give the place a natural atmosphere.
Unlike some other teahouses, Sannolu doesn’t require reservation. You can simply walk in, just as you would to go to any café.
Just as at the main Jeju teahouse, you will find beverages made of 12 types of teas, including blue tea and yellow tea as developed on the island, not to mention the popular green tea and matcha products. Pound cakes, terrine, and brownies made of matcha are also available. Jeju’s tea leaves are now being used for beauty products, too. Collaboration and coexistence when it comes to Jeju’s green tea have built Sannolu into what it is today.