Daejeon’s Devotion to Kalguksu
We didn’t realize we’d be eating so many different variations of kalguksu in one city. How have people of Daejeon become so devoted to this noodle dish?
A bowl of ramyeon goes hand in hand with a roll of gimbap. At least that seems to be the go-to combination at franchise snack bars. Then once you’re in Daegu, you will see that udon-gimbap combo is it. It’s a completely different story in Daejeon, where gimbap goes with kalguksu. It’s easy to spot restaurants whose names include the words gimbap and kalguksu. 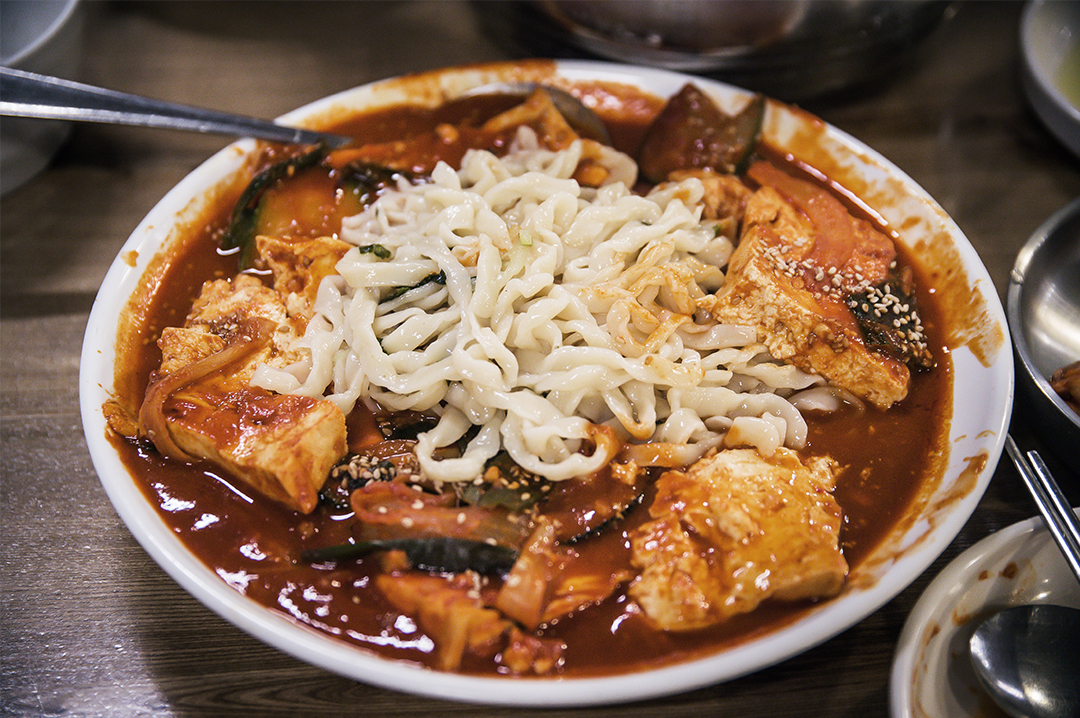 Cheers to Kalguksu Places in Daejeon
Daejeon is absolutely devoted to kalguksu (dish of knife-cut wheat flour noodle). Back in the day, flour was considered precious because it was difficult to find it. After the Korean War, the American aids, combined with the nationwide campaign that encouraged consumption of crops other than rice starting in the 1960s, it became much easier to prepare meals with flour. Daejeon was the distribution center of flour offered in aid. The city was a transportation hub, and flour would be brought to Daejeon before being distributed all over the place. Sungsimdang, one of Daejeon’s most famous bakeries and a great source of civic pride, started with two bags of flour aid.
Of some 18,000 restaurants registered in Daejeon, some 10 percent of them serve kalguksu. Of them, more than 500 specialize in the noodle dish. And 28 of them have been standing across three generations. The city even hosts a festival for kalguksu. You can sense the pride that people of Daejeon feel about kalguksu that transcends love of the dish.
The most basic types come in beef bone broth or anchovy broth. Other variations you will find in Daejeon will feature short-necked clams, spicy broth, loach, perilla seeds, adzuki beans, abalone, seafood, fish porridge, squash and squid. You may wonder if some of these combinations would even work, but once you taste them, any lingering doubts will disappear.
We’ve selected must-go kalguksu places in Daejeon, taking into account their taste and ingredients, among others.
Daesun Kalguksu
Daesun Kalguksu serves dishes that Daejeon people love the most. They are also quite familiar with their signature dishes: a bowl of kalguksu with squid duruchigi (stir-fried dish) and slices of boiled pork. You won’t go wrong with anything from the menu here. 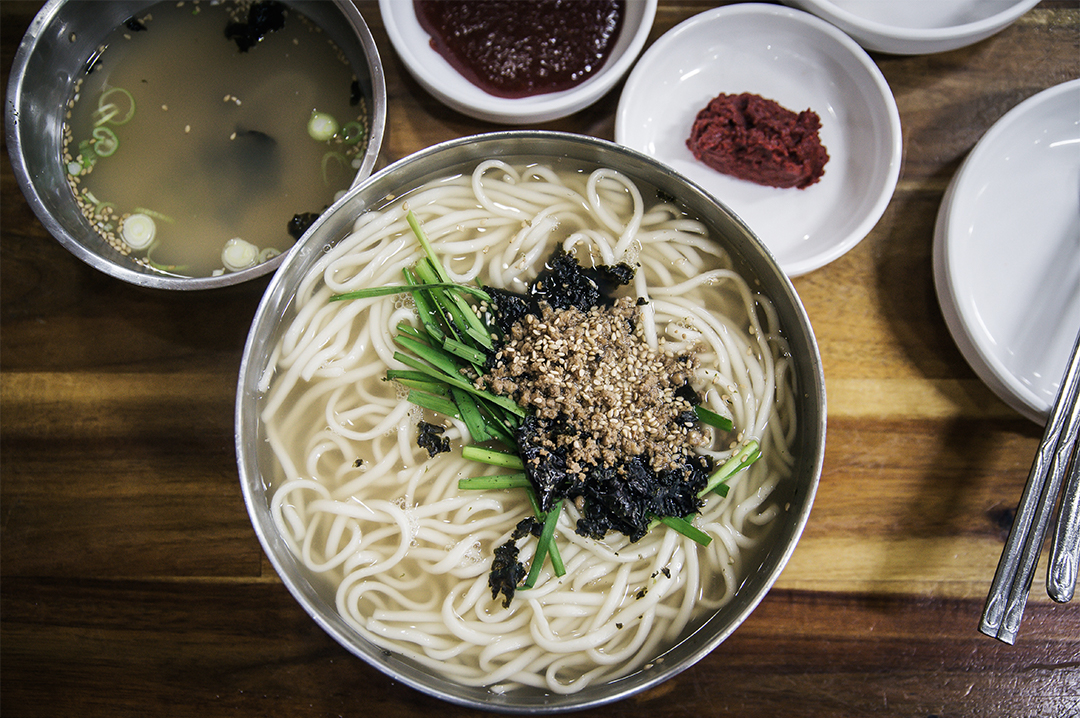 Daesun Kalguksu opened in 1958 in the heart of one of Daejeon’s busiest neighborhoods, making it one of the oldest kalguksu places in the city, alongside Sindo Kalguksu. As is the case with most restaurants of certain vintage, you will find some elderly folks out for a weekday lunch. Once you walk in, you will see people carrying slices of boiled meat on the left, while duruchigi and kalguksu are brought in from the kitchen. Most patrons order all three dishes. 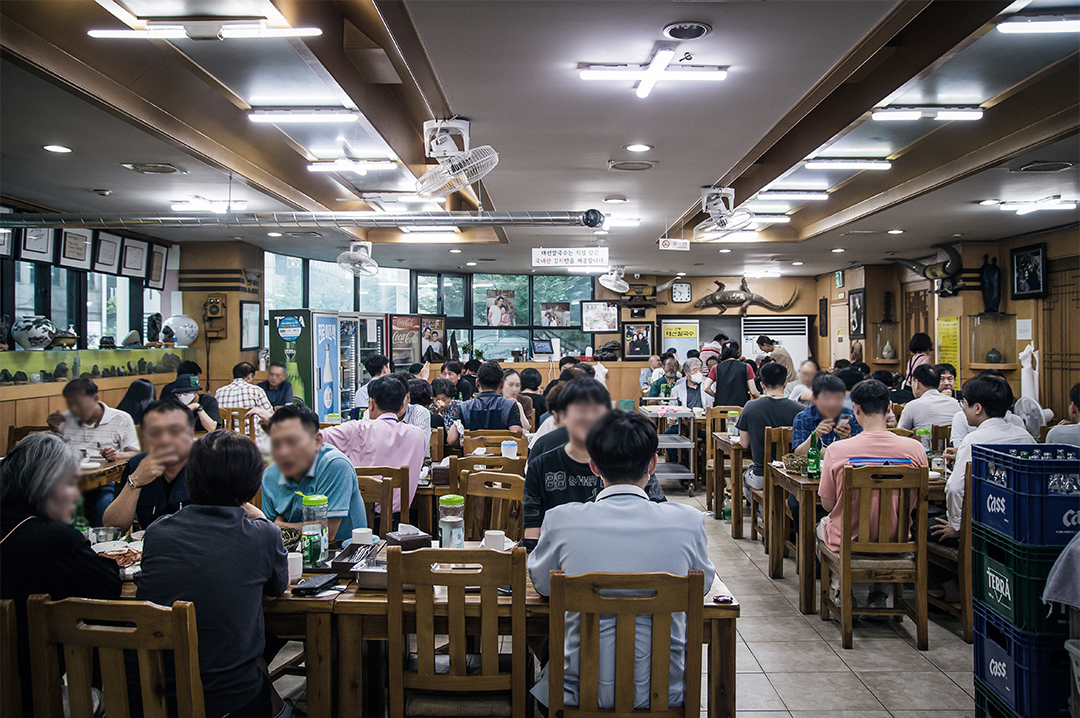 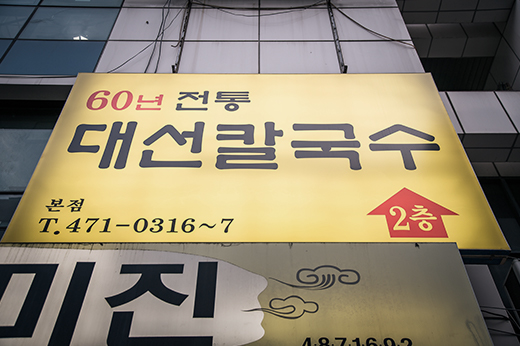 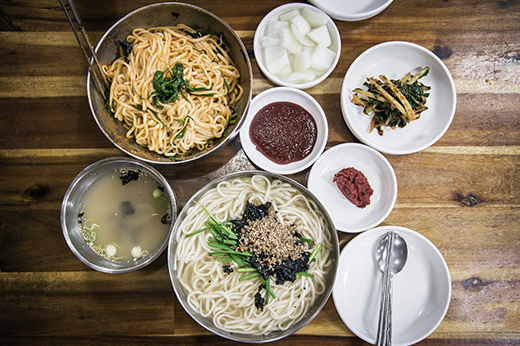 The broth mostly features anchovy, with some kelp and short-necked clam. It has just the right amount of flavor, neither too salty nor too bland. The noodle here is mixed with bean flour and the soft texture goes perfectly with the broth. The boiled pork dish, made only with samgyeopsal (pork belly), brings meaty flavor without being too oily or greasy. There’s little wonder you will find this dish on every table. Bibim kalguksu is another popular dish. The noodle is still warm, unlike other types of bibim (mixed) dishes with cold and chewy noodle. As the warm noodle cools down, it becomes harder to mix with the sauce. People who know a thing or two about kalguksu use their spoons to chop the noodle. You can have the more conventional bibim kalguksu with the cold noodle, but the one with the warm noodle is worth a try.
Address 2nd Fl, Ohseong Building, 28 Dunsanjung-ro, 40bun-gil, Seo-gu, Daejeon
Phone +82-42-471-0316
Dongwon Kalguksu
When you’re in Daejeon, trying to find the right companion to kalguksu, with its warm broth and noodle, is sort of a problem to solve. In Daegu, you can eat flat dumplings alone or dip them in tteokbokki sauce. You can either wrap one in sesame leaf or eat it with spicy raw fish salad. In Daejeon, they try to mix and match kalguksu with other local staples. 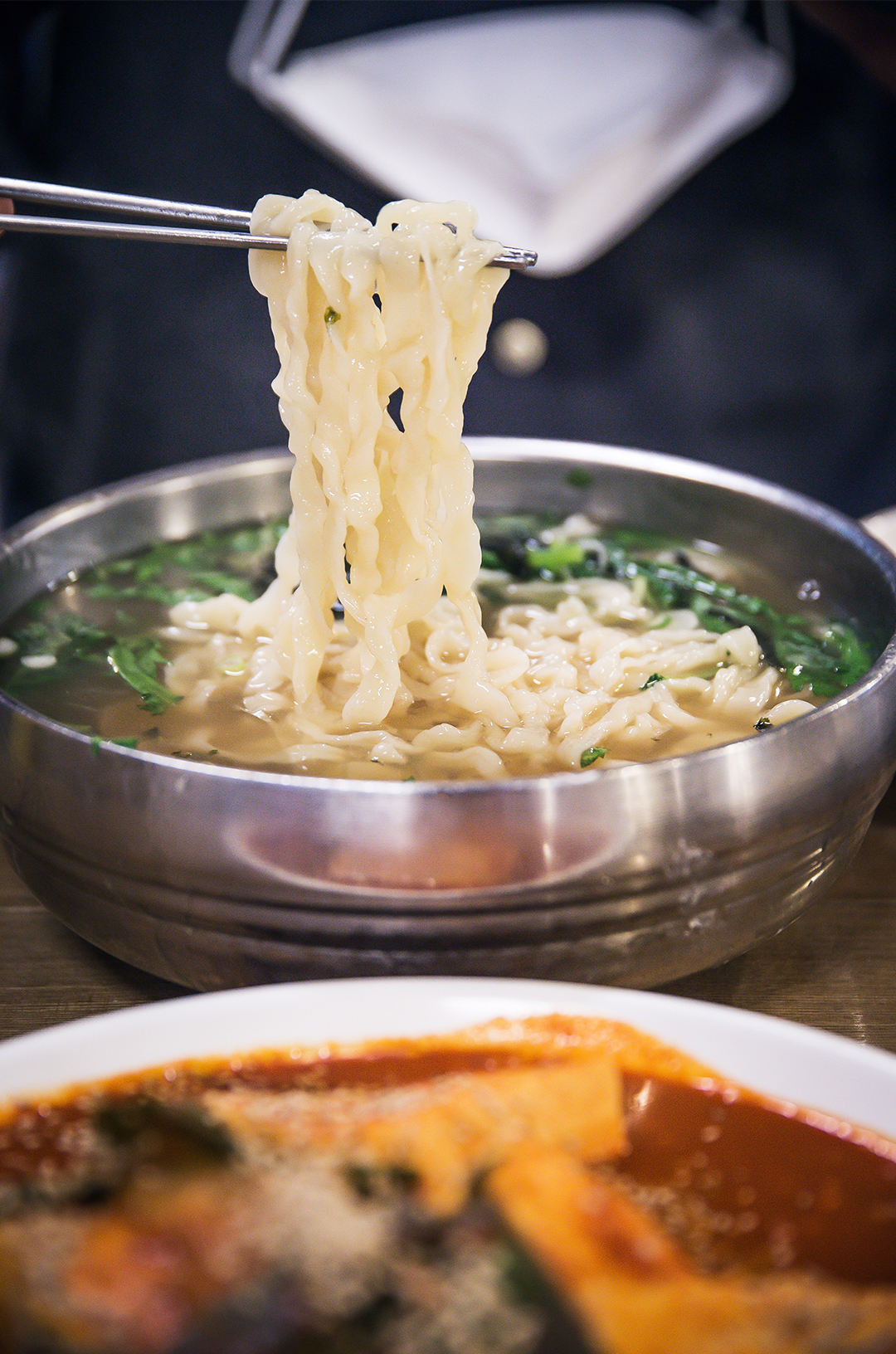 For instance, stir-fried squid comes with kalguksu noodle, instead of the typical somyeon (thin, plain noodle). Dongwon Kalguksu is among places that serve dubu (tofu) duruchigi, and people mix kalguksu noodle, cooked in thick broth, in that spicy sauce. The taste may not be all that familiar at first, but it is undeniably delicious.
Dongwon Kalguksu is second to none, when it comes to bringing dubu duruchigi and kalguksu together. The two key features of this place are the broth made of clam freshly picked from the Yellow Sea and the chewy noodle made of dough ripened for three days. Duruchigi has tender dubu stir-fried with homegrown red pepper paste, red pepper powder and onion. 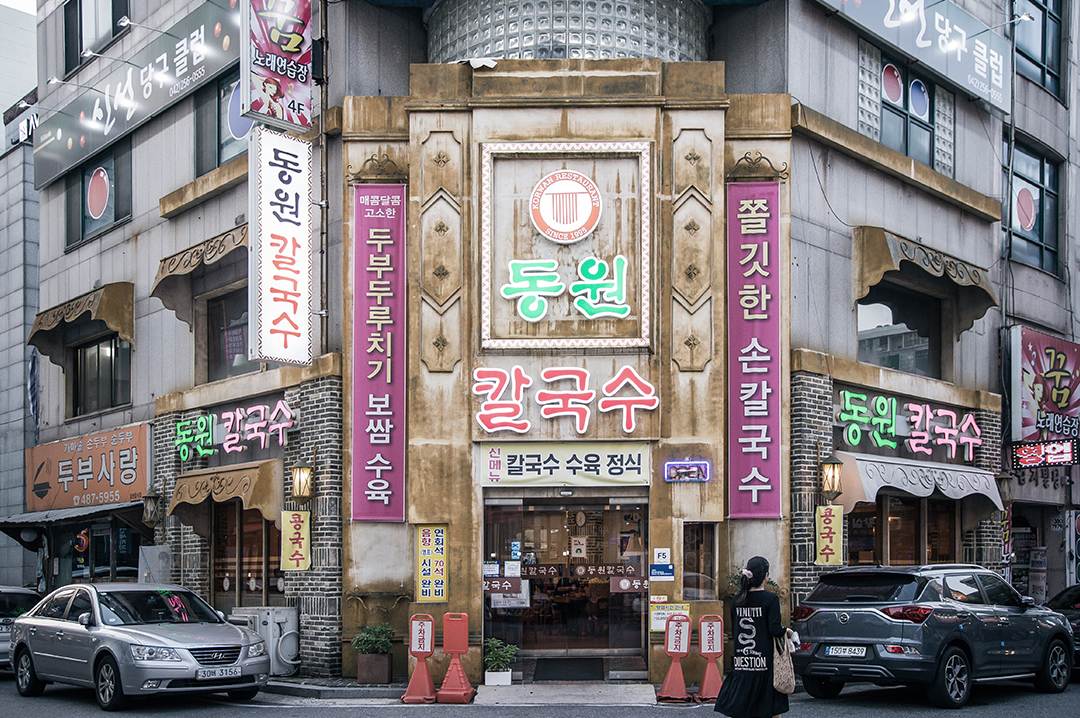 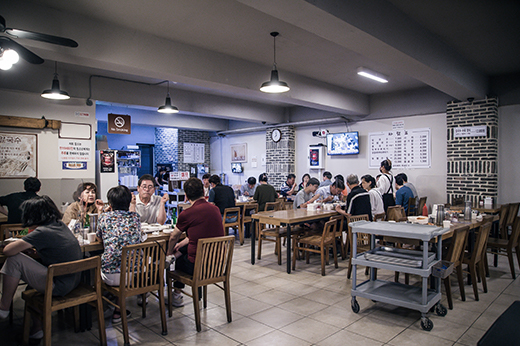 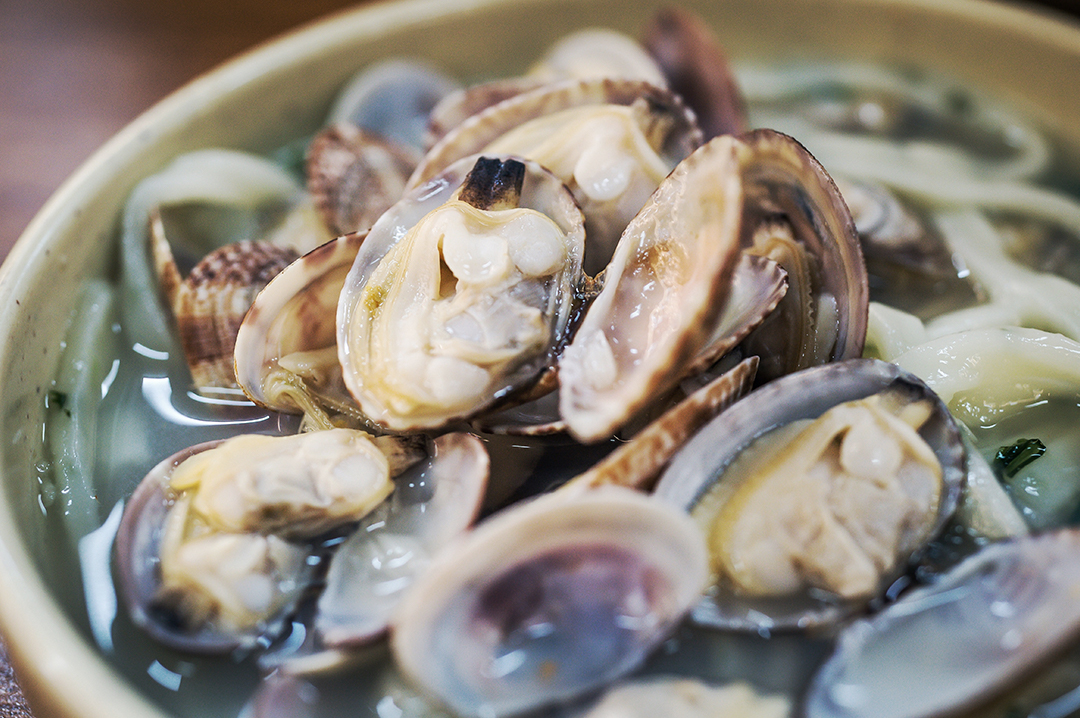 For those of us living in or near Seoul, kalguksu here will seem familiar, because it has mostly the same ingredients as the ones served on the West Coast, in places like Oido and Daebudo. And yet, chives play such a different role here. The lump of chives on top of the broth helps balance the flavor, so that your bowl isn’t just the soup and the noodle. The broth is rich without being too greasy, and the noodle has just the right amount of chewiness without giving off floury smell.
The noodle here is different from other places, in that small pieces of chives can be found inside. Whereas most others mix chive extract with the dough, pieces of chives go into dough here. The noodle has distinctive texture to it. 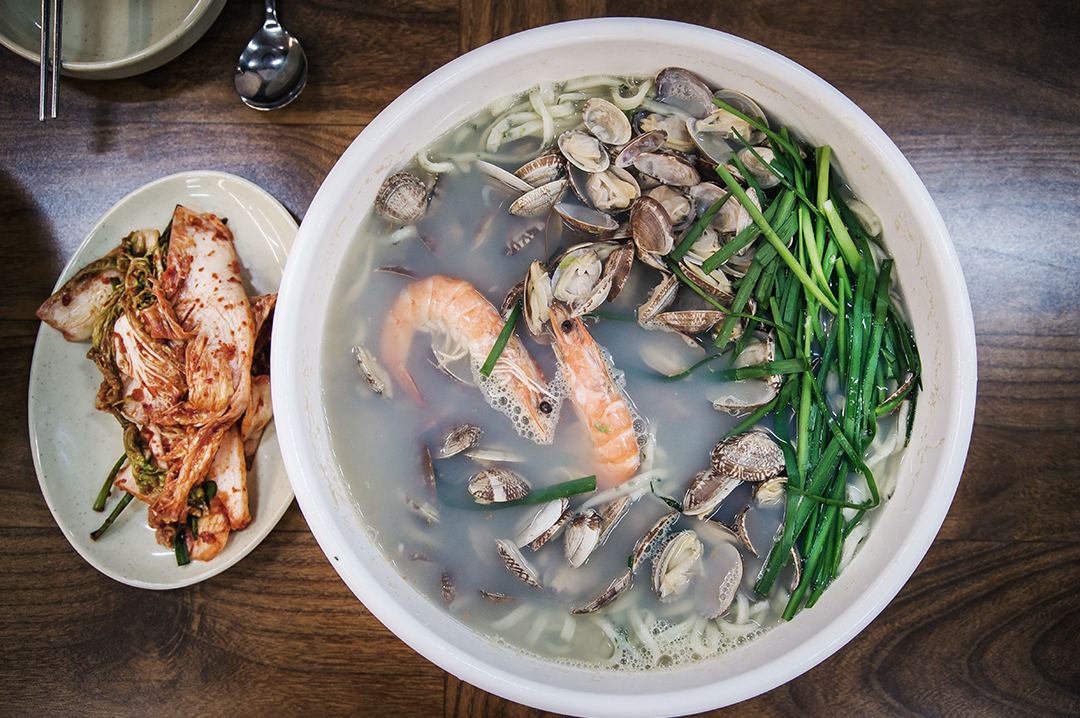 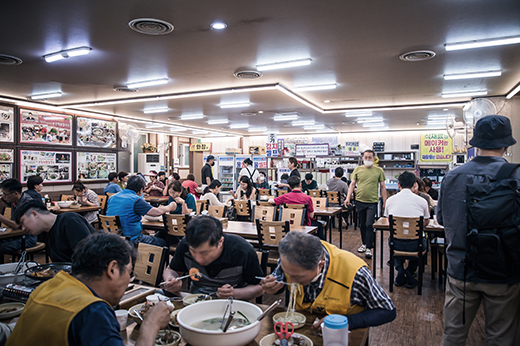 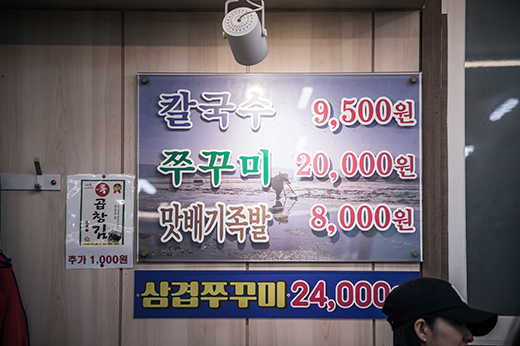 They keep things simple here. Along with kalguksu, you can get webfoot octopus and small servings of pig feet. This restaurant doesn’t quite have the history of some other places in Daejeon. Folks here tried to figure out what people would like and what they would find unique and special. And they’ve nailed it with their chive noodle. If you are not a fan of long queues, try visiting past the typical lunch hours, ideally after 2 p.m.
Address 31 Shintanjin-ro 804bun-gil, Daedeok-gu, Daejeon
Phone +82-42-934-5656
Sonamujip
Sonamujip, boasting over 30 years of history, will greet you with that distinctive smell of kimchi. And just when you think this place, for all its long tradition, isn’t all that crowded, you will see a wave of people coming in. This place may not attract queues like some other places, but it does have its share of visitors. 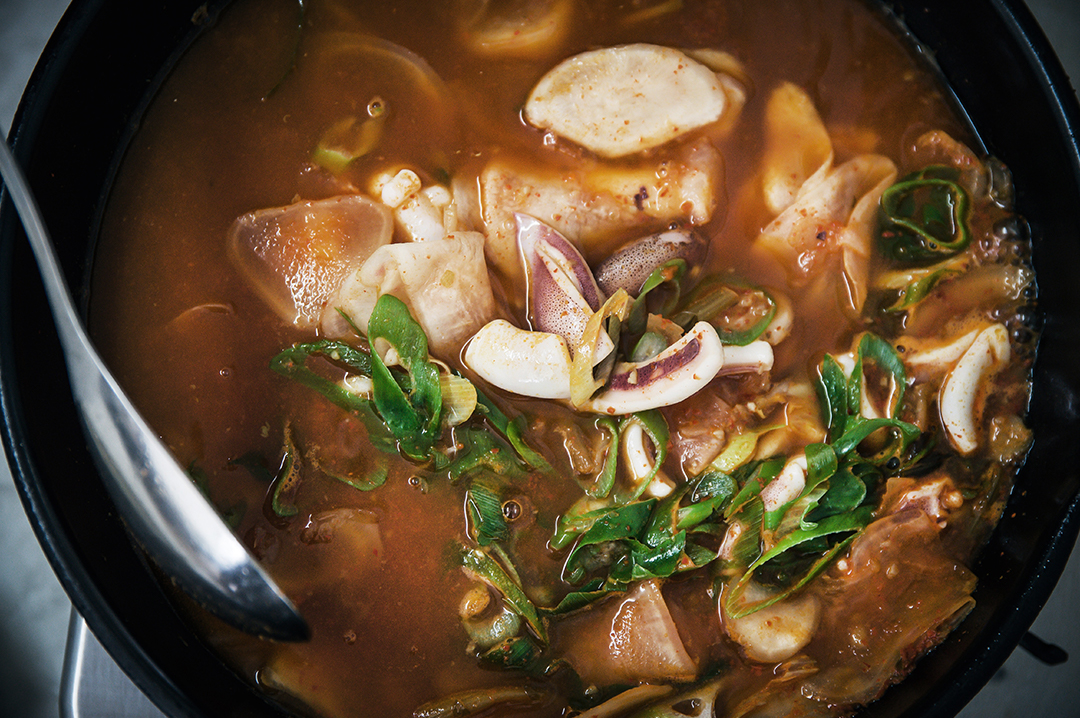 Given the restaurant’s narrow and long rectangular shape, serving may seem to be a challenge. But because they’ve been doing this for a long time and they keep their menu simple, you won’t find many nits to pick here. Sonamujip isn’t a kalguksu place per se; they serve squid spicy stew with kalguksu noodle inside.
The price recently went up from 6,000 won to 7,000 won, still in the reasonable range. Squid spicy stew here isn’t the typical type that you’d see elsewhere. The stew is served with the ripe radish kimchi, whose smell welcomes you to the restaurant, and you’re supposed to put kimchi in the boiling stew. 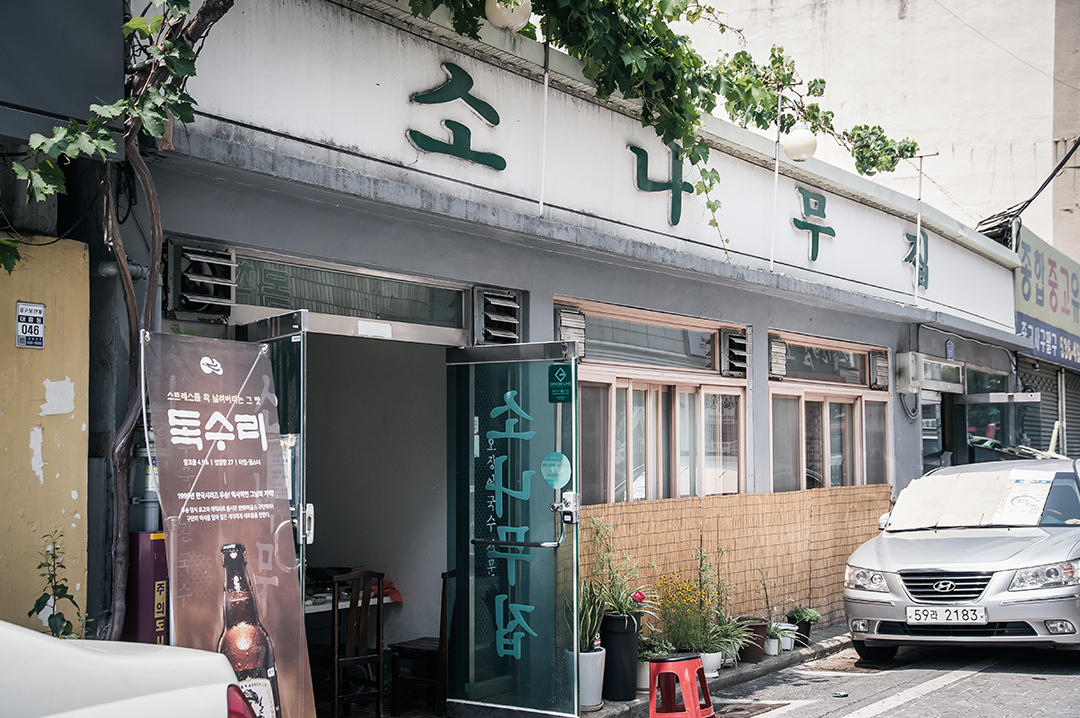 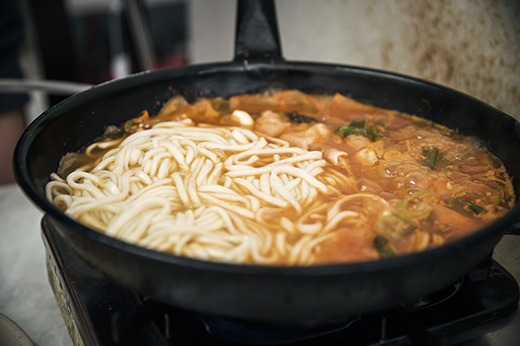 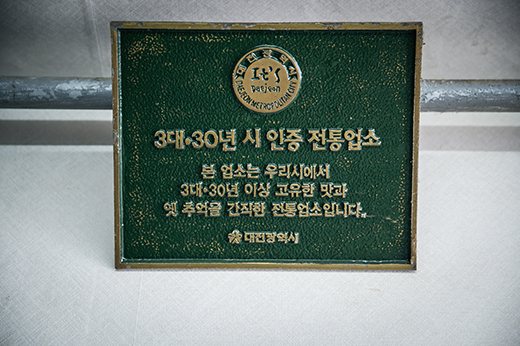 We looked the part of out-of-towners, and the elderly woman running the place kindly showed us the proper way. For the regulars, dishes that had brought radish kimchi were wiped clean already. It may not seem like much, but that radish kimchi added a special bit to the soup. It was almost like putting pieces of squid into kimchi stew. For decades, people in Daejeon have grown used to the biting and yet hard-to-describe taste of this squid stew and noodle. Once that taste is etched into your body, it will stay with you a long time.
Oh, be sure to order a plate of dubu buchim (pan-fried).
Food knows no boundaries, it seems.
Address 59 Daejong-ro 460bun-gil, Jung-gu, Daejeon
Phone +82-42-256-1464
Ossi Kalguksu
A daily paper in Daejeon once looked into the amounts of searches on navigation as released by the Korea Tourism Organization’s Data Lab, and ranked the most-searched destinations in the food and beverage sector in Daejeon. Ossi Kalguksu came out on top among kalguksu places in the city. Even with well-known kalguksu restaurants all across the city, Ossi Kalguksu is always crowded, with people outside holding numbers and waiting for their turn to get in, even on weekdays. Unlike older restaurants, this place attracts younger crowds and people traveling from outside Daejeon. Ossi Kalguksu is just as famous outside Daejeon as it is in the home city. 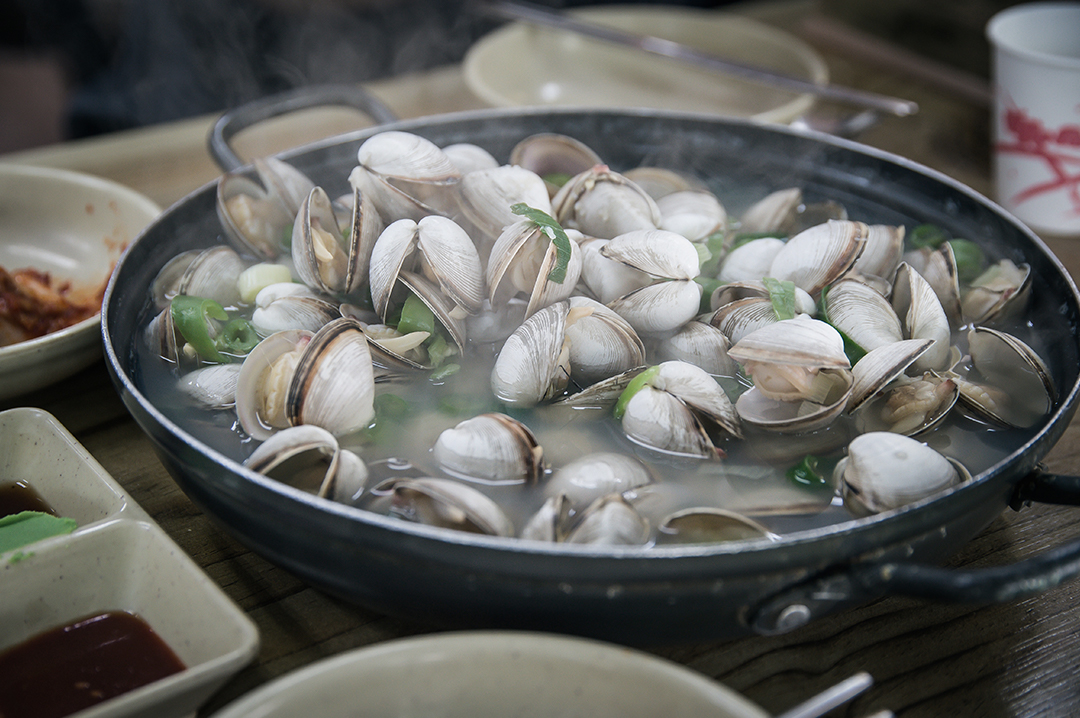 Ossi Kalguksu’s best-known dishes are sonkalguksu (handmade) and mulchong (literally ‘water gun,’ referring to surf clams) (1kg). The noodle’s broth is made with radish, anchovy, surf clams and Cheongyang chili pepper, giving it some spicy taste without taking on the red color. The noodle is as thick as udon noodle, with chewy and firm texture. Handmade dough is kept inside plastic bag for a couple of hours before it’s cut into noodle. 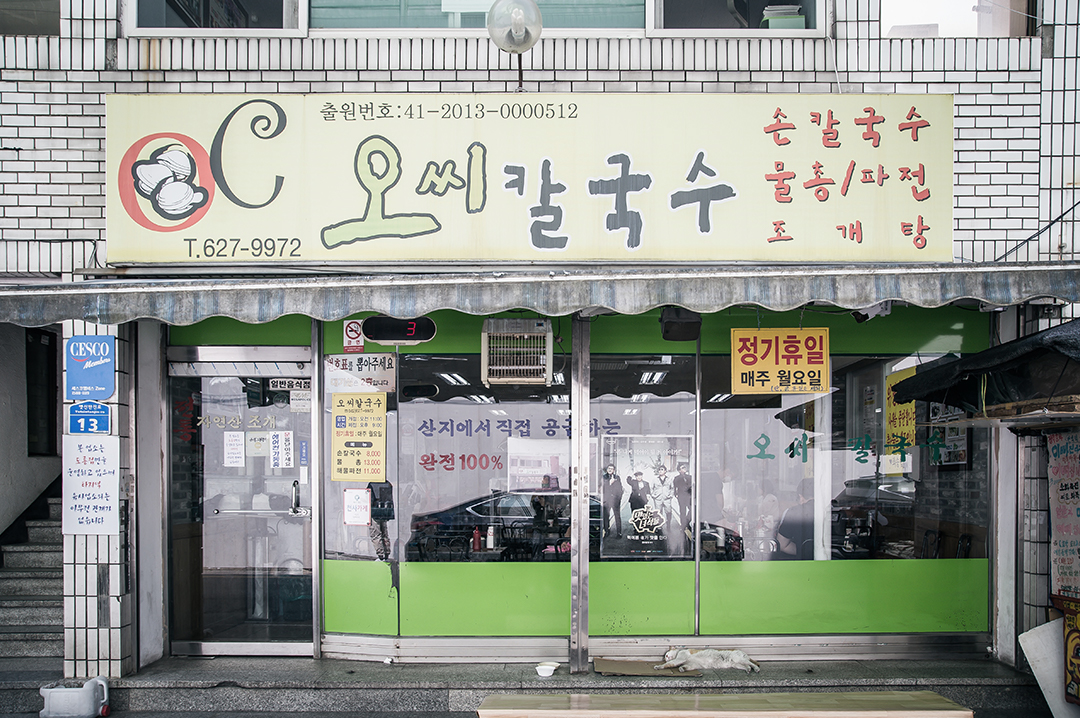 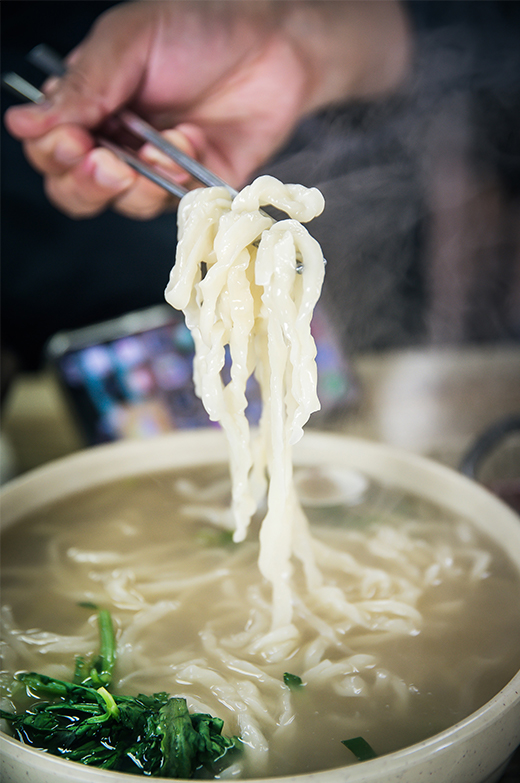 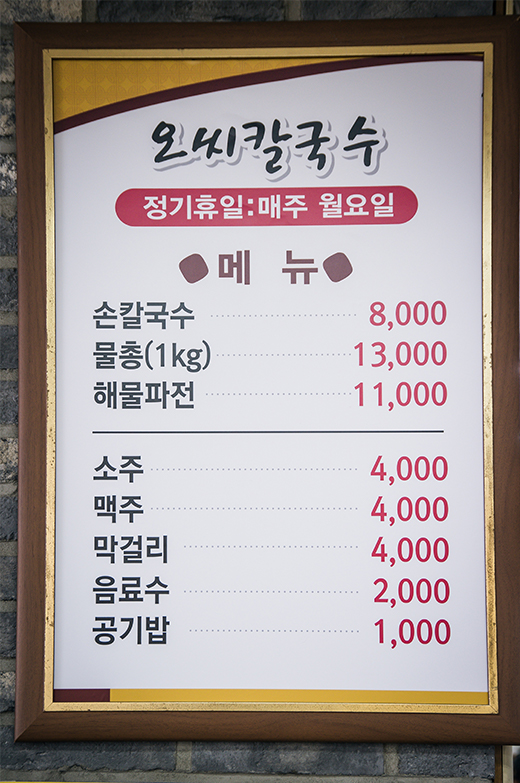 Order mulchong and you will get a bucket full of surf clams, which squirt water like water guns. They don’t skimp on these surf clams here, be it in your noodle bowl or mulchong. They bring surf clams up from Gochang, North Jeolla Province, and use 600kg to 700kg per day.
Pajeon (green onion pancake) filled with clams and squid is also a popular dish. Kimchi served on the side is quite spicy, but the biting sensation adds a unique twist to the whole dining experience here.
Address 13 Yetshintanjin-ro, Dong-gu, Daejeon
Phone +82-42-627-9972 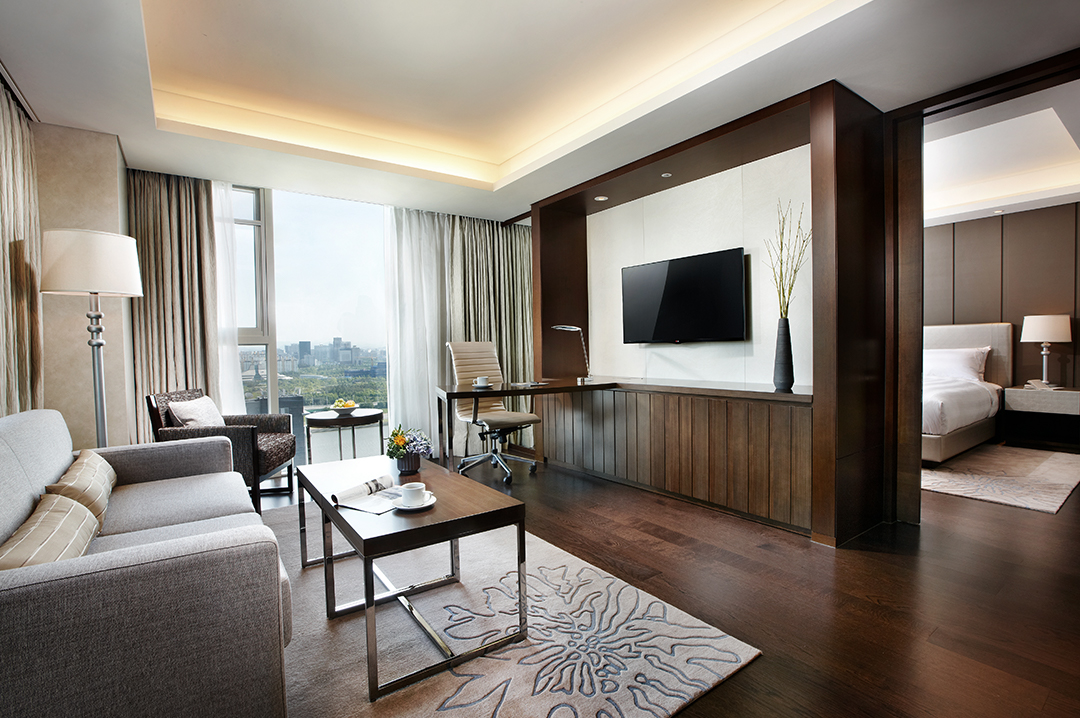 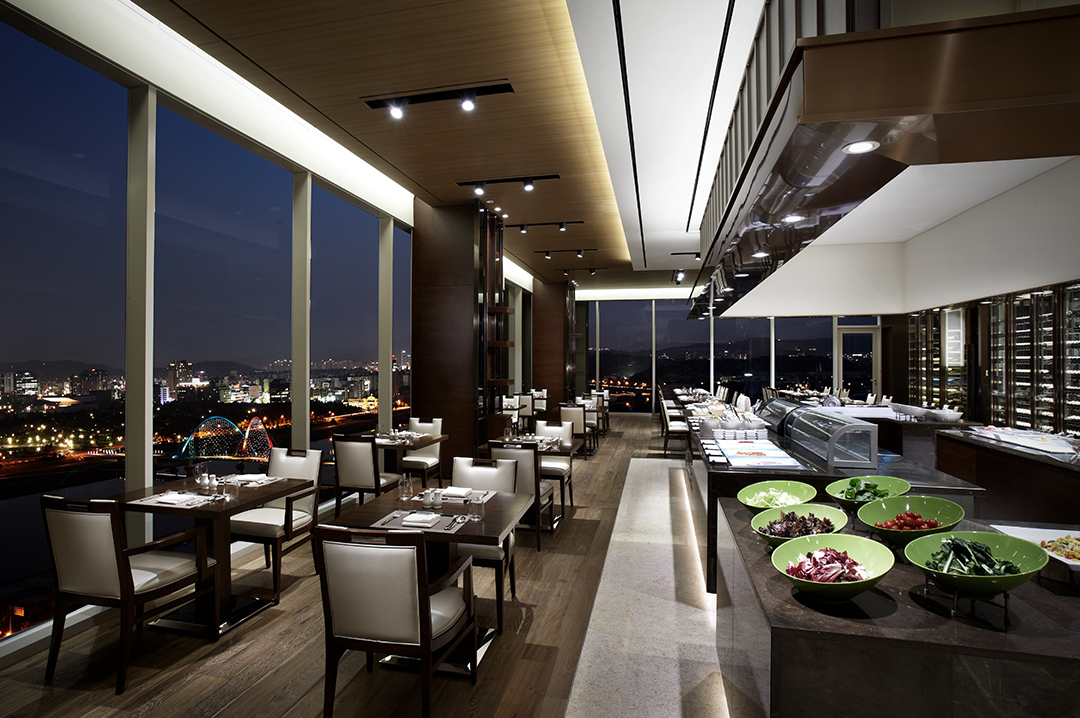 Where to Stay in Daejeon: LOTTE City Hotel Daejeon
LOTTE City Hotel Daejeon is located about 10 minute drive away from Daejeon Station. The 18-story hotel has a total of 306 rooms and suites. Buffet restaurant C’café offers diverse cuisine along with a breathtaking view of the city from the top floor. At night, guests can relax in a cozy room and watch the famous night view of Expo Bridge.
Address 33 Expo-ro 123beon-gil, Yuseong-gu, Daejeon
Phone +82-42-333-1000
Homepage www.lottehotel.com/daejeon-city