Taste of Market
How about a date touring trendy restaurants in downtown Seoul? Gwangjang Market is famous for its yukhoe and bindaetteok, while Namdaemun Market takes pride in its galchi jorim. After a filling meal, go on a stroll around Mount Namsan like you would in your neighborhood on an ordinary day or spend time shopping if you’d rather.
Visiting a busy market in winter when temperatures drop can be actually quite romantic and pleasant. At around this time of year, markets become a place where people can find both warmth and vibrant energy. It’s a perfect place to learn about the city they are located in and its residents.
One of the places most frequently visited by tourists coming to Seoul is traditional markets such as Namdaemun or Gwangjang Market. These markets are crowded with shoppers and vendors from morning till night—a typical, fast-paced market scene of a big city. Market food, above all, plays an essential role in it.
Namdaemun Market and Gwangjang Market, both representative of Seoul, often overflow with hungry tourists and foodies. They line up in Galchi Jorim(braised hairtail fish stew) Alley at Namdaemun Market at lunch, and order makgeolli along with bindaetteok(mung bean pancake) and yukhoe(Korean-style raw meat) at Gwangjang Market in the evening. 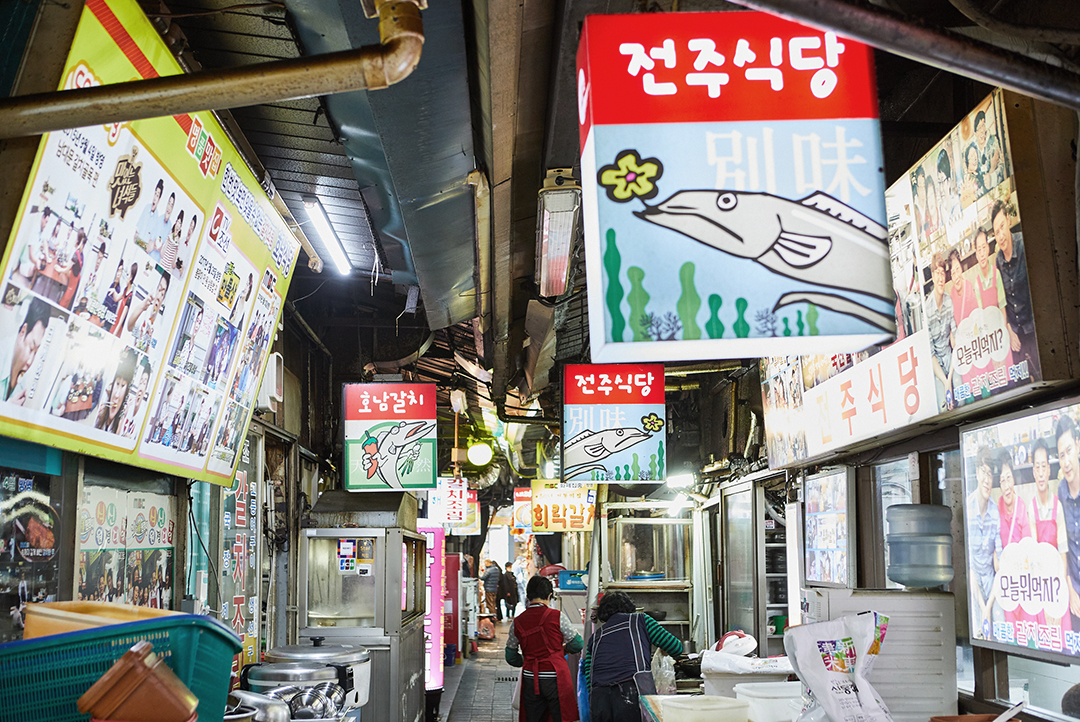 Waiting in Galchi Jorim Alley, Namdaemun
Although the official name is Sungnyemun, most people still refer to it as Namdaemun or Namdaemun Market. Around lunch hour every day, the narrow alleyway between Sungnyemun Imported Goods Shopping Center and Daedo Shopping Center gets crowded with people coming and going. Galchi Jorim Alley is packed for the same reason. There are lines formed in front of each small restaurant selling the famous fish stew. The alley is filled with the boiling and sizzling sounds from the large pots deep-frying fish in large amounts. It’s a well-known lunch scene at the market. 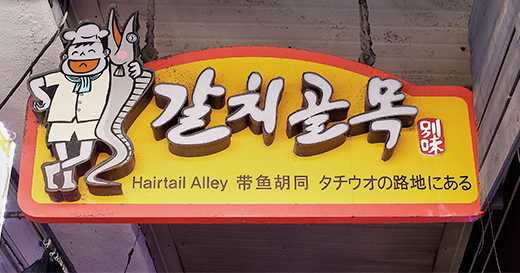 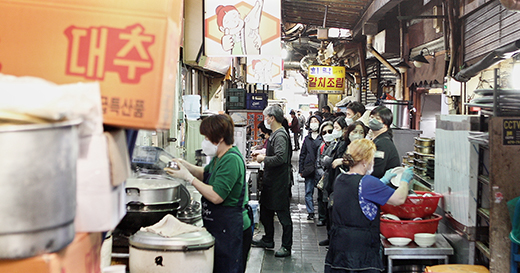 Galchi Jorim Alley at Namdaemunsijang 2ga-gil was formed around 1988 by the restaurants specializing in the Korean hairtail dish. Unlike now, the restaurants served the specific fish because it was one of the most common, affordable kinds. The signature menu was initially tailored to the taste of Namdaemun merchants. Soon word of mouth started bringing regular customers to the alley.
Originally there were restaurants selling different food items. After a handful of galchi jorim businesses including Huirak Sikdang and Wangseong Sikdang became famous through word of mouth and were even featured on TV, other businesses turned to galchi jorim as well, resulting in the specialization of the alley. Particularly, various overseas media including ones from Japan covered the story about the alley, and a greater number of foreign tourists started coming to the market to taste the fish dish.
Although all restaurants share the same description of their specialty, the ingredients and flavor all differ across the competing businesses. 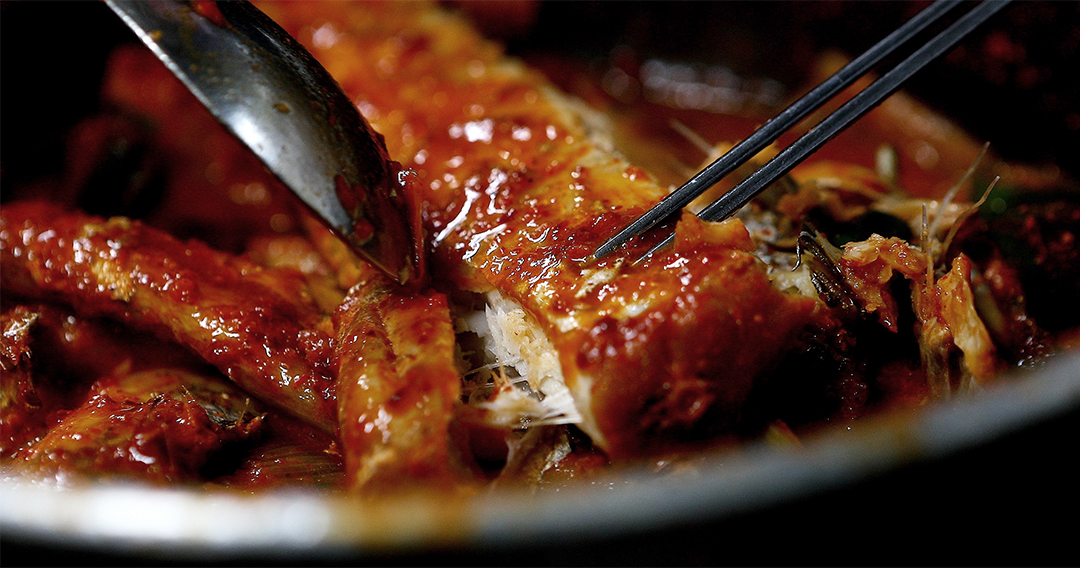 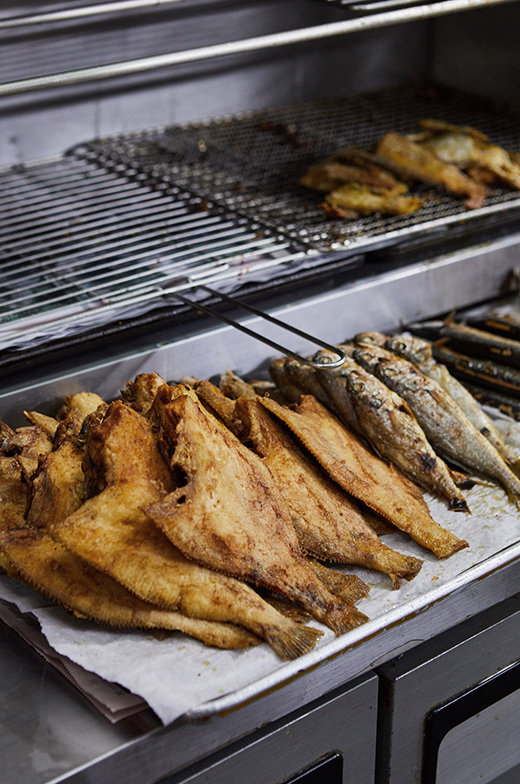 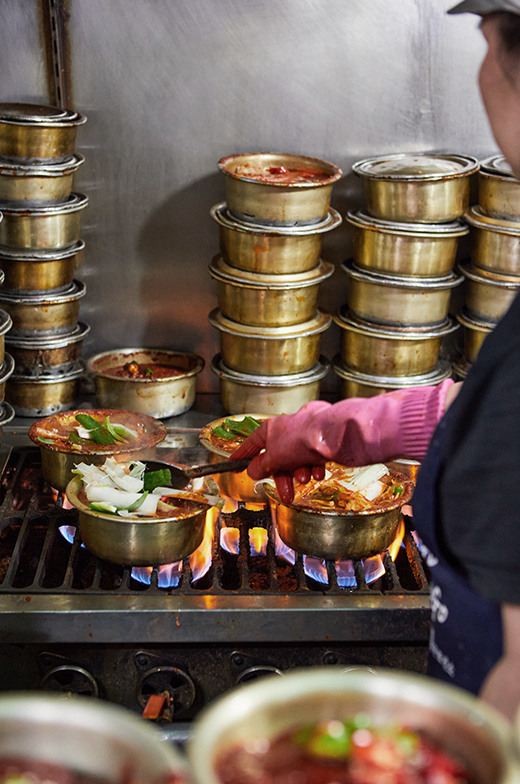 Some restaurants set the minimum order quantity at two servings, whereas others do provide single servings. The flavors vary a great deal, being anywhere from sweet to spicy. Different kitchen tools are used, such as stainless or nickel-silver pots as well as earthen pots known as ttukbaegi in Korean. Additionally, fried fish also may be cooked with an electric oven or a deep fryer. Such diverse recipes and methods all lead to the popularity of the fish dish. In general, the price is around 12,000 won for a single serving of galchi jorim and the same for an assorted fried fish. There are of course differences depending on the restaurant.
You can have both the satisfaction of a gourmet meal as well as the added bonus of potentially hearing heartwarming stories from people you encounter at the market when you visit Galchi Jorim Alley. 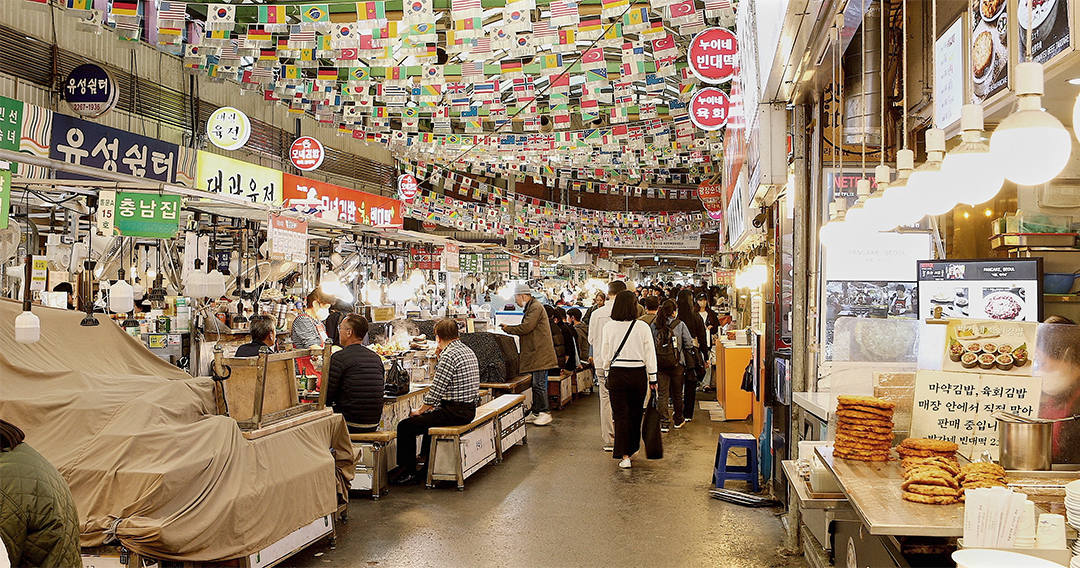 Raw Meat and Octopus Combo, Yukhoe Alley at Gwangjang Market
For over decades, Gwangjang Market has attracted visitors with mouthwatering smells. Naturally the Gwangjang Market alley is considered a place where you can find the most tasty food in Seoul. It offers an extensive range of food as well as pairing options that are unfamiliar yet make perfect sense once you try them out. The East Gate of Gwangjang Market and the North 2 Gate and South 1 Gate provide access to the food alley. Frequent visitors to the market can easily find shortcuts to their destinations. 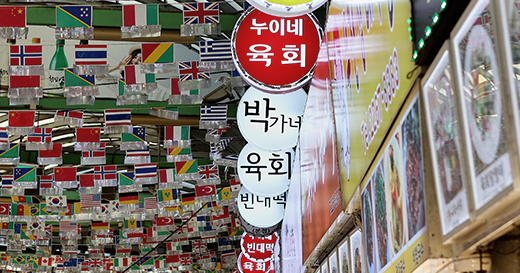 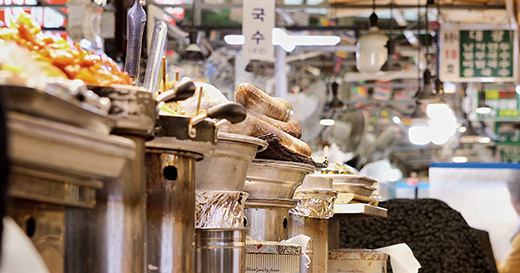 Gwangjang Market is a traditional market originally established in the early 20th century. In the early 1900s when Japanese businesses took over the right to the marketplace, Korean merchants raised money to open the first daily market in Korea. Over the 100 year history, the market has gone through changes in its main items. Starting with clothing and textile, it has dealt with hanbok and various ingredients. Then it led to a rising number of return customers who found the market food delicious. The top contributor in this new wave of popularity of Gwangjang Market was none other than snack food. In particular, ‘Mayak Gimbap,’ a short rice roll wrapped in dried laver served with an addictive mustard dipping sauce, bindaetteok, assorted fried pancakes, and yukhoe are the most popular.
The yukhoe restaurant alleys are located at the tip of Meokgeori Jangteo(food market). Offering cuts of beef freshly cut on the same day, yukhoe has become the most sought-after menu in the market in recent years. Yukhoe Jamaejip was the first business to open and draw customers, and an alley of similar restaurants began forming naturally. 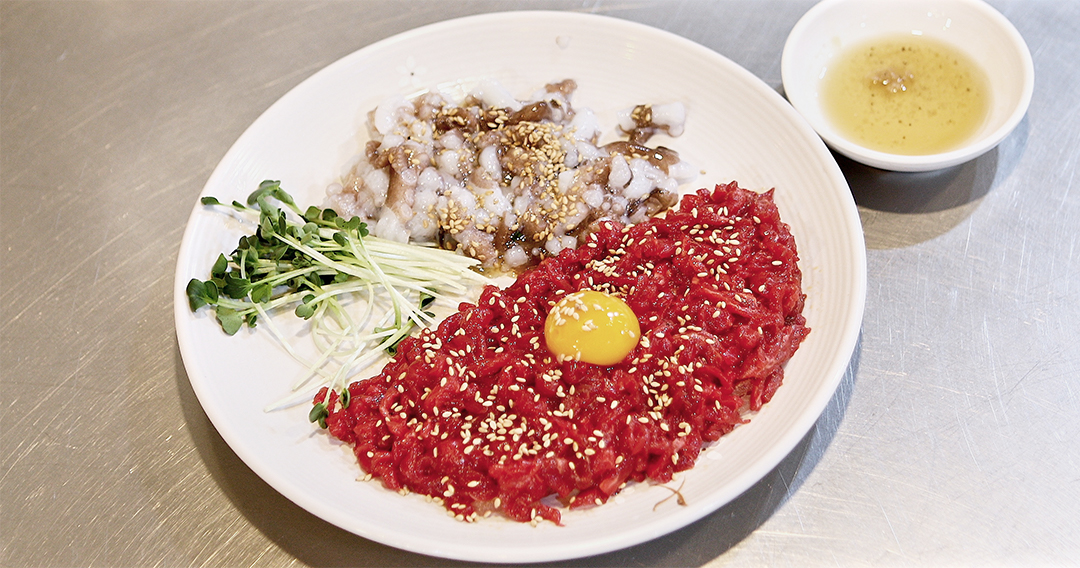 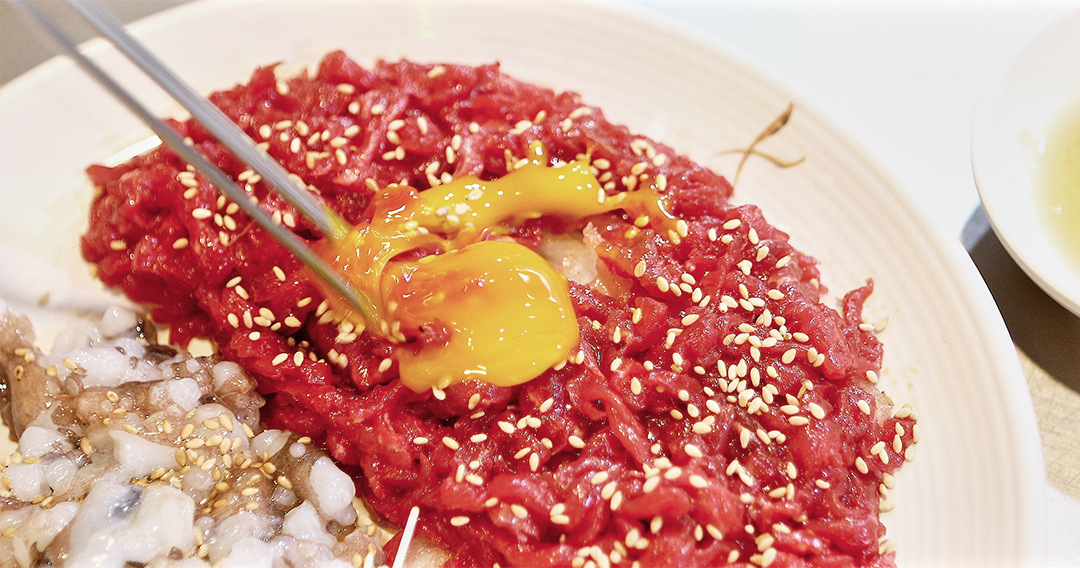 The most important aspect of yukhoe is the freshness of the meat without question. Restaurants at Gwangjang Market mostly purchase Korean-bred beef on a daily basis and prepare the dish on site. The quality of raw meat is top-notch, with a soft and fresh texture. Yukhoe fans tend to prefer eating yukhoe like sashimi, dipping the cut meat in the sesame oil sauce, or eating raw liver cuts. Since who knows when, yuksashimi tangtangi, a dish of yukhoe with sliced raw octopus, became popular. Still feeling like you can eat more, order a yukhoe bibimbap to share with your company, or buy kkoma(mini) gimbap or bindaetteok additionally. There are over 10 restaurants with a yukhoe sign, but considering some businesses run multiple stores, you can estimate that 6-7 yukhoe businesses are running at the market. Even bindaetteok and fried pancake restaurants include yukhoe in their menus, indicating that yukhoe is Gwangjang Market’s hottest item. However, the ones that are not specializing in the raw beef menu often do not serve radish soup that are meant to be eaten with yukhoe, which is a downside. This situation calls for your quick, yet wise decision on whether to supplement the meal with fried pancakes or gimbap. The price of yukhoe runs around 19,000 won per serving. Such a price point with the high quality meat is only found in Gangbuk(north of the Han River) area. Young customers go for yukhoe and bindaetteok to fill their stomachs and imported vintage clothing stores, right next to the food market, to satisfy their minds. 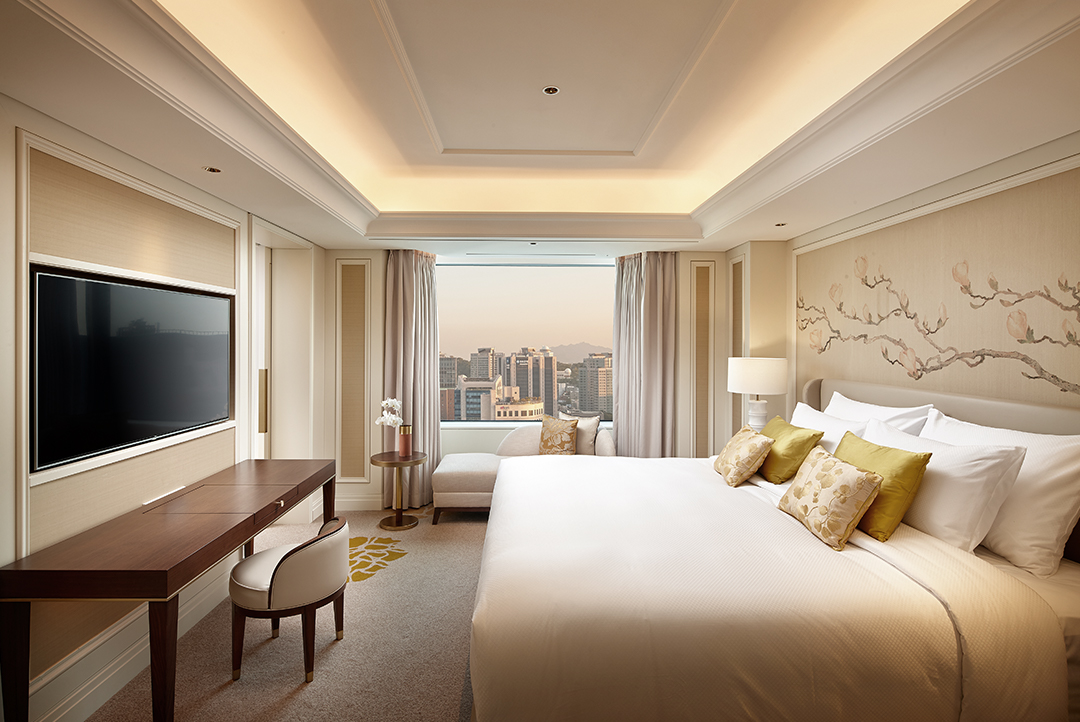 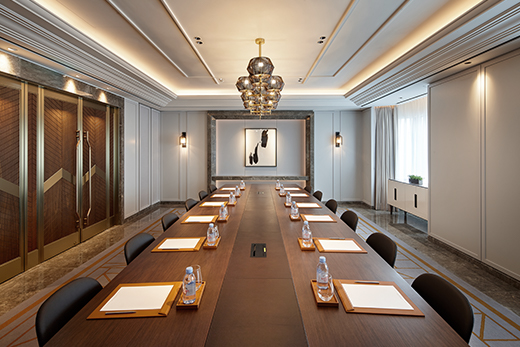 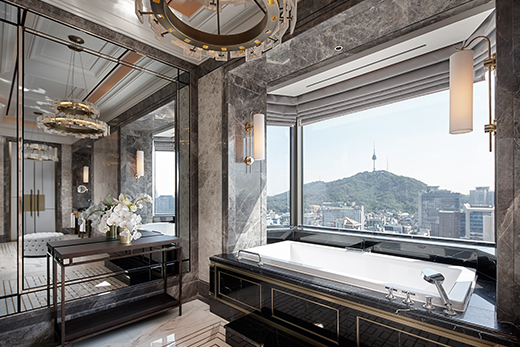