Yeongdo Cafés Take Pride in Location
We bring to you two local brands that are worth noticing in Yeongdo, the hippest town in Busan today. A sense of pride about their individual locations are the highlights of their stories.
Yeongdo is an island on the southern edge of Busan. It is the only administrative ‘gu’ that is made entirely of islands among Korea’s autonomous regions. Previously called ‘Jeoryeongdo,’ it is where the famous Geumjeong mountain range ends. Four routes, via Busan Bridge, Yeongdo Bridge, Namhang Bridge, and Busan Harbor Bridge, provide connection between the island and the mainland. 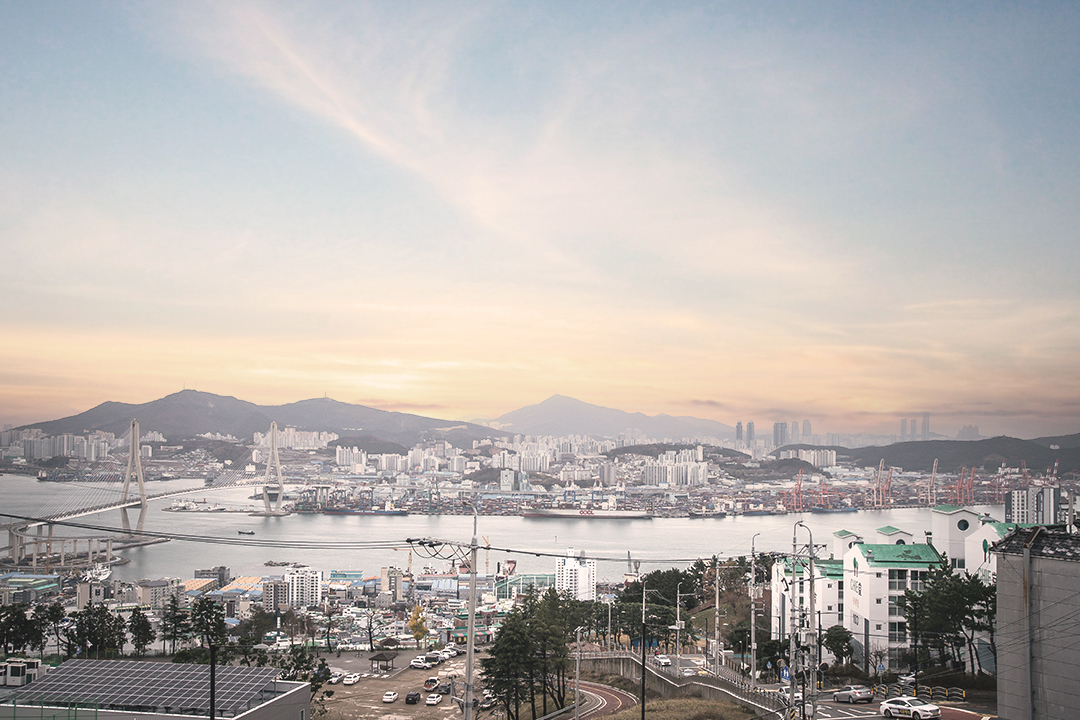 Only in Yeongdo
Although it is technically an island, Yeongdo is quite close to the central Gwangbok-dong streets that are just across Busan Bridge or Yeongdo Bridge. There is a 396m-high Bongnaesan Mountain at the heart of the island. Taejongdae, perched at the tip of the island, has been famous for its breathtaking ocean view. On a day with a clear sky, you can see as far as Japan’s Tsushima Island from Taejongdae.
Yeongdo was originally occupied by small-scale shipyards such as shipbuilding ironworks and repair businesses. Due to the lack of elements that could work as tourism attractions, it was literally considered an island, like an odd piece of a puzzle, not just to the minds of visitors but to Busan people as well.
The island, however, has been undergoing a dramatic change for the past few years. Cozy little shops and cafés started to open business in the island and tourists are coming to visit Huinnyeoul Culture Village to see pretty murals on the walls of the village sitting on the narrow alley between the cliff and sea. Filling the empty space where ironworks factories and warehouses once stood are large cafés and cultural complexes. Last year, Momos Coffee, a leading player in Busan’s coffee industry, launched a coffee bar in Yeongdo. There is also a woodwork brand Jackson Fab & Cup, newly settled in Yeongdo.
Signature Busan Style, Momos Coffee Yeongdo Roastery & Coffee Bar 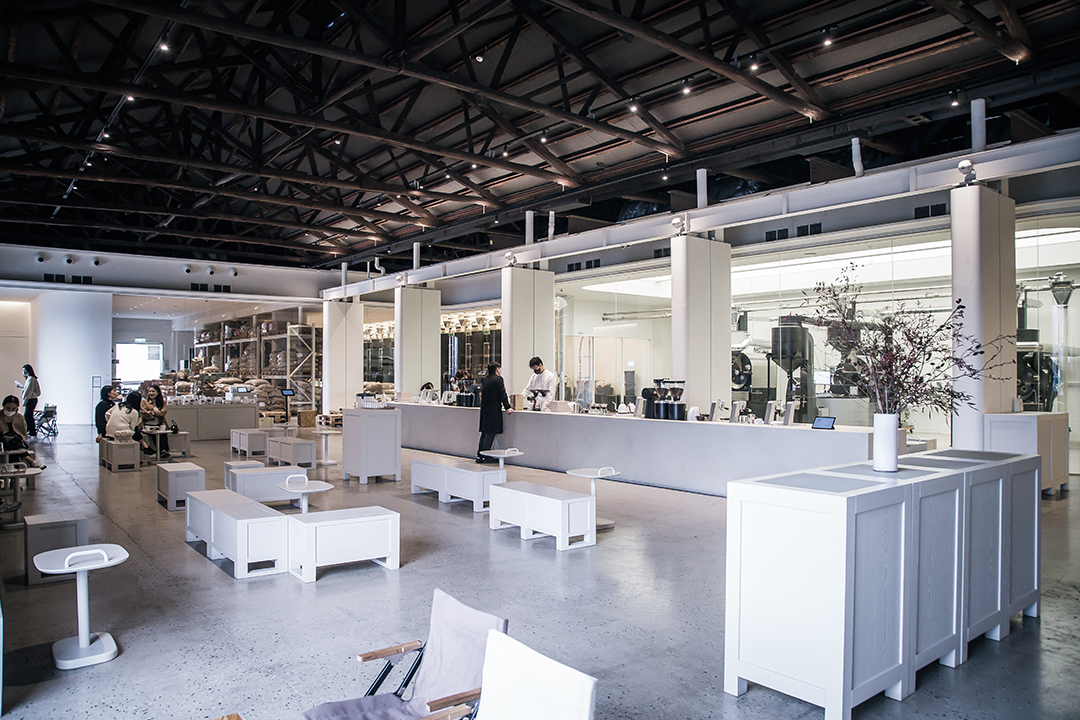 Momos Coffee Yeongdo Roastery & Coffee Bar is all about engaging customers through coffee.

Many people thought it was natural that Momos Coffee opened another storefront, in addition to the Oncheonjang main store, and yet became curious as to why Yeongdo was selected. Despite the possibility of having an amazing ocean view at places like Haeundae, Gijang, or Songjeong, the unexpected move into the island known for its former ironworks and warehouse industries eventually prompted the question of why, for many people.
The new branch of Momos Coffee in Yeongdo is simply called ‘Momos Coffee Yeongdo Roastery & Coffee Bar.’
Fitting for being a roastery and coffee bar, the café serves the minimal version of drink items available at the Oncheonjang main store. Just a few coffee options and teas are all they have. In place of a variety of the Momos bakery menu, the Yeongdo shop focuses on showing to the visitors the entire step-by-step process that follows the buying of the coffee beans, up to the extraction of the espresso into a cup, in fine detail. 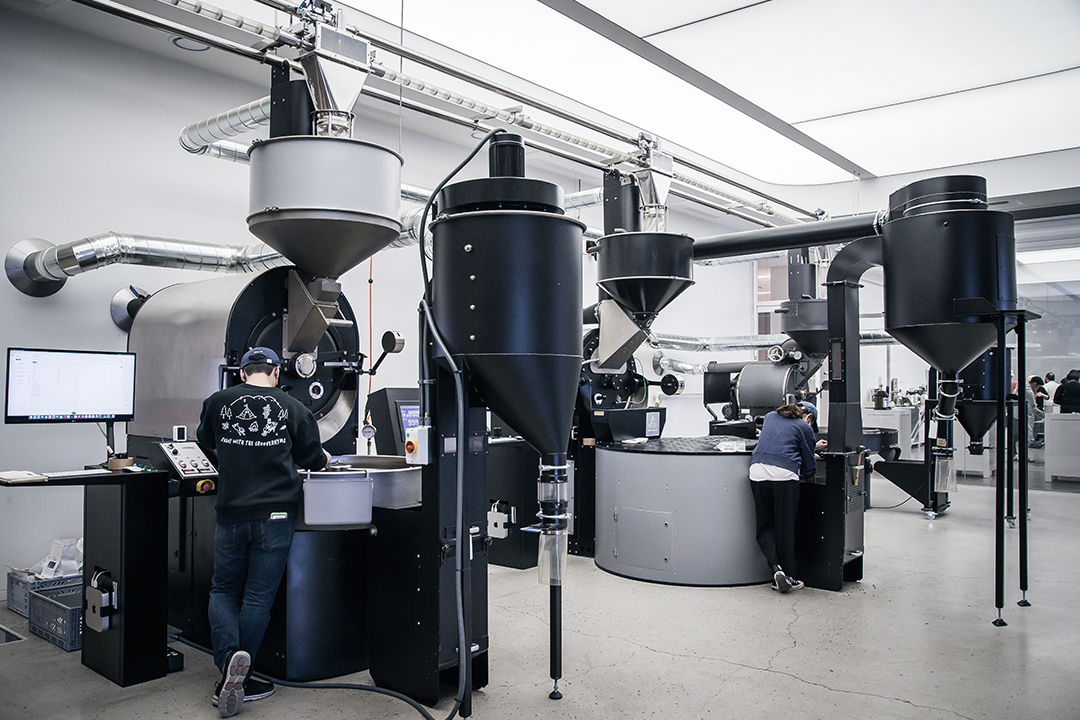 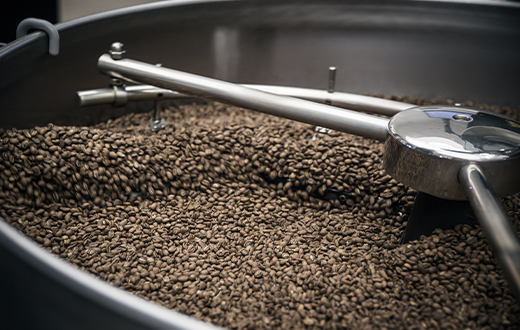 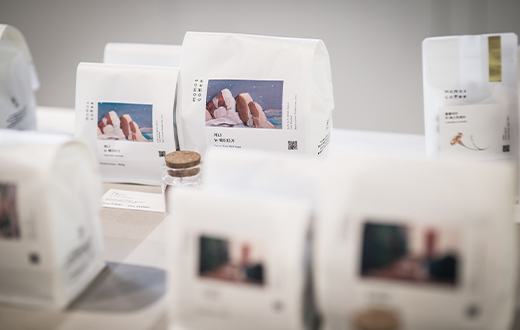 You can see how beans offered at Momos are stored, roasted and packaged, all in one place.

At Momos Coffee Yeongdo, the work begins by storing the locally-bought, fresh coffee beans at the optimal temperature and humidity, and continues on to roasting an appropriate amount of beans and wrapping on demand. It all takes place in a room with a floor-to-ceiling glass wall, so visitors can watch the process from outside. Each step is explained through the QR codes posted on the glass wall.
Instead of choosing to put more tables in to increase its seating capacity, the café is more dedicated to sharing the work that keeps Momos running, with its customers. The staff also offers detailed information about the beans to shopping customers. 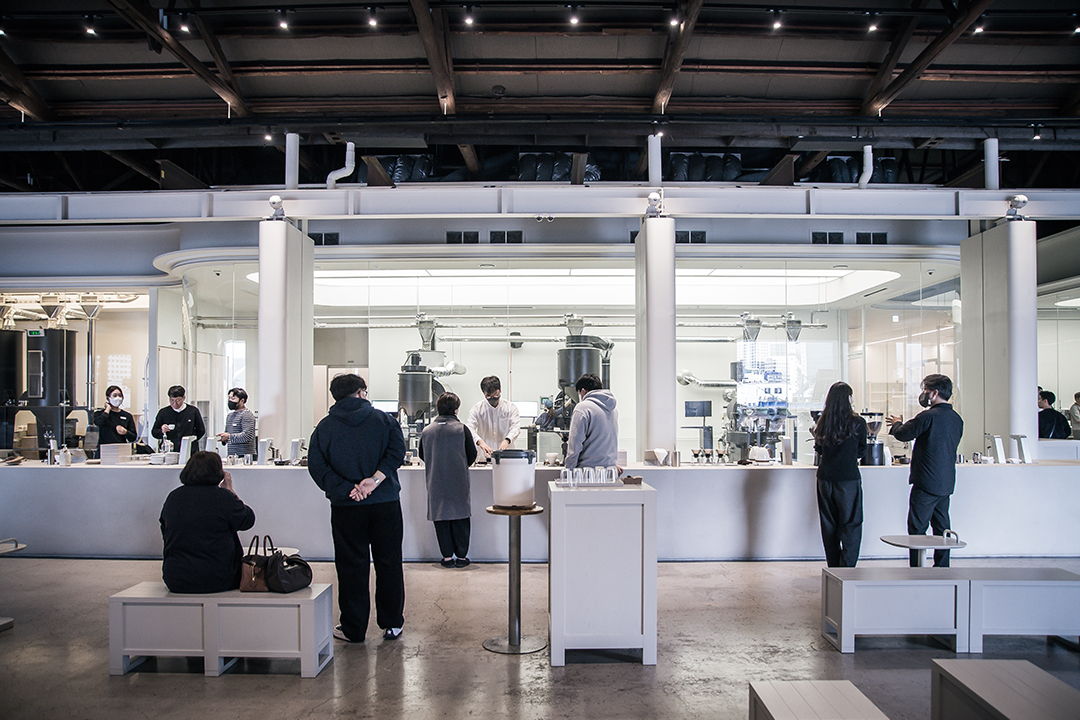 A wide range of programs allows customers to experience different types of coffee. 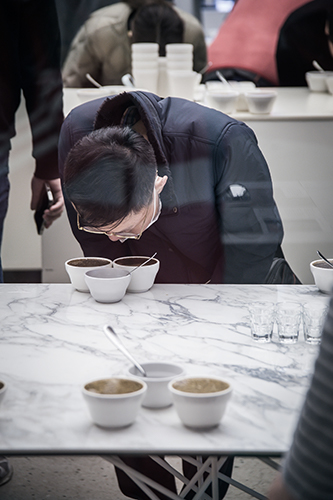 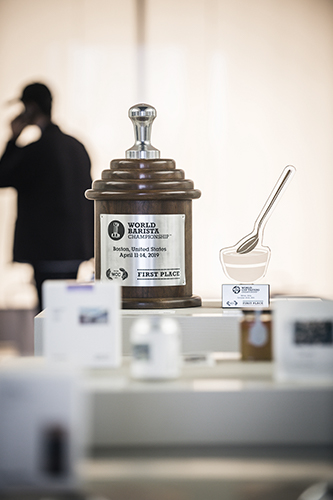 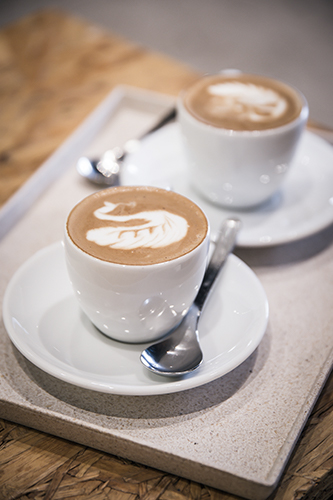 In a spacious lab in a corner of the café, the staff experiments with new beans or does tasting, as well as the Wayo Cupping event for visitors to sample various coffee and freely talk about the experience with other people. This activity is also viewable through the glass window. It is as if the café is doing a lot more than promoting what they do, perhaps to the point of ‘Come join us in our admiration for coffee,’ through communication and sharing.
The value Momos Coffee places on the communication with people can be clearly seen in the lowered coffee bars  and the hidden vents of the espresso machines that welcome conversations.
Rather than generating 100 franchise shops, Momos Coffee puts all effort into creating a perfect café to ensure customer satisfaction and sharing of emotions. That explains why Momos opened another store in its hometown, Busan.
Address 160 Bongnaenaru-ro, Yeongdo-gu, Busan-si
Website www.momos.co.kr
Woodwork Studio Gifts Panoramic Busan View, Jackson Fab 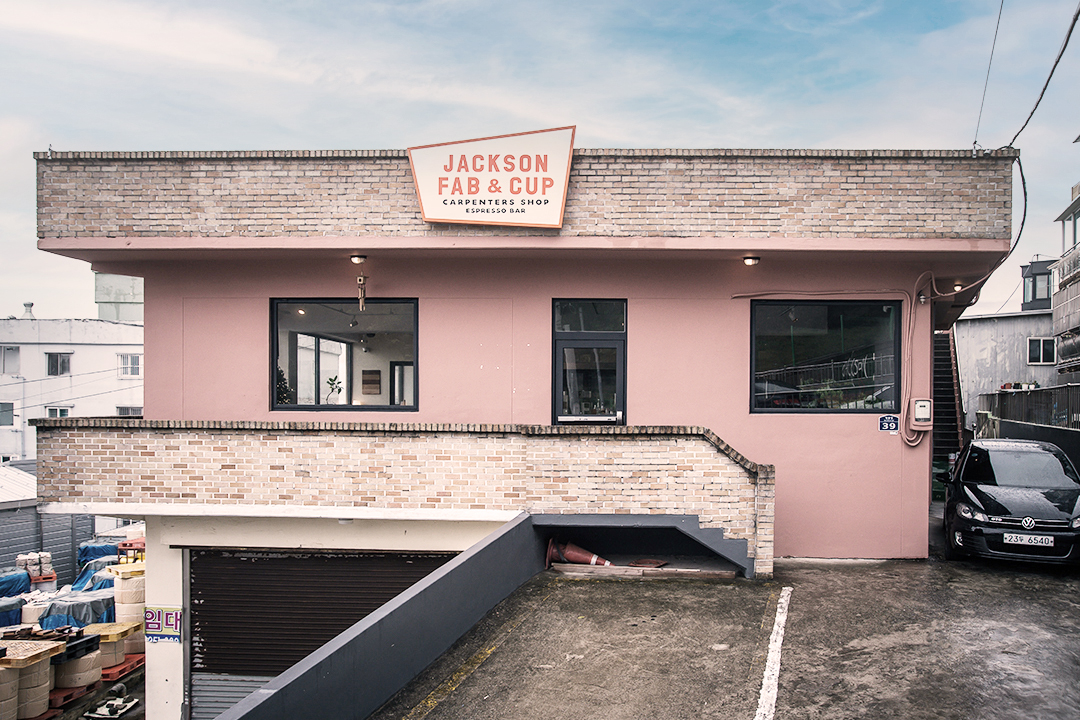 The exotic-looking Jackson Fab, in the middle of the mountain road toward Bongnaesan

If Gijang and the Orangdae area offer the best viewing spot for sunrise in Busan, Yeongdo has an advantage as the most beautiful sunset spot in the port city. Particularly, the sunset from Bongnaesan Mountain, which is the highest peak in the area, brings you peace and serenity. Jackson Fab & Cup is a café and woodwork studio located off the windy mountain road toward the peak.
Four furniture designers who met at a carpentry school in Seoul decided to open a shared woodwork studio and workroom. Just the idea of jointly operating a furniture studio when their backgrounds are all different was daunting to begin with. However, they are devoted to keeping their original decision. The issue was the cost, as it is quite expensive to open a studio in Seoul. In the end, they picked Busan for their start, and that’s where Jackson Fab was launched. 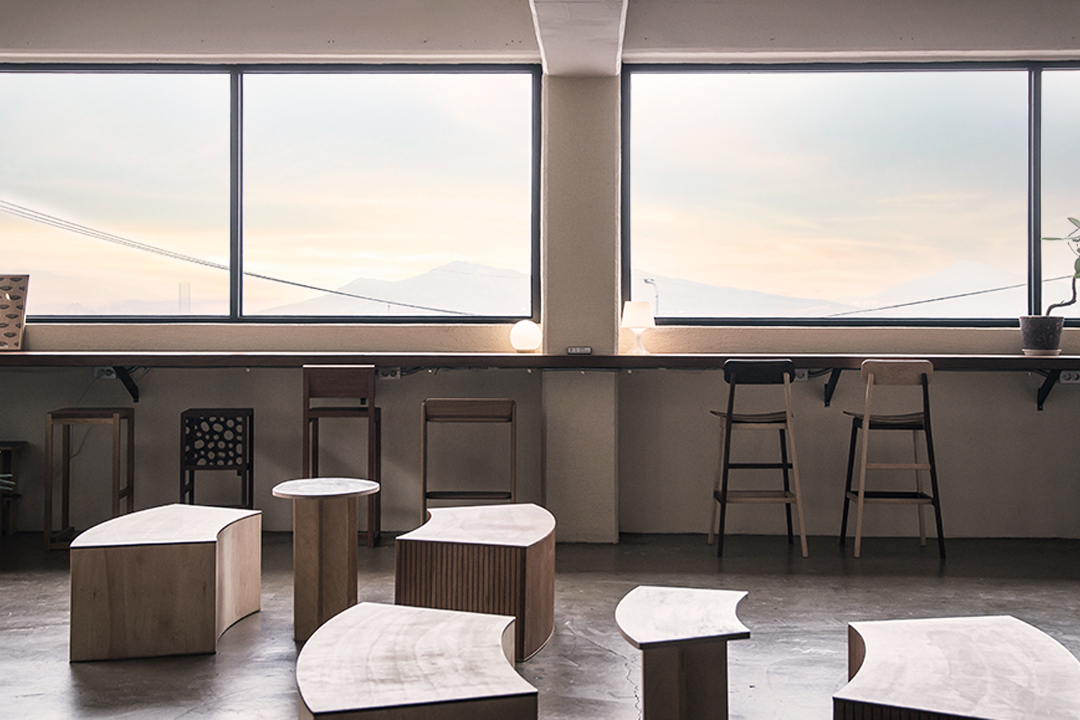 Every furniture and woodwork accessories were built by designers at Jackson Fab. 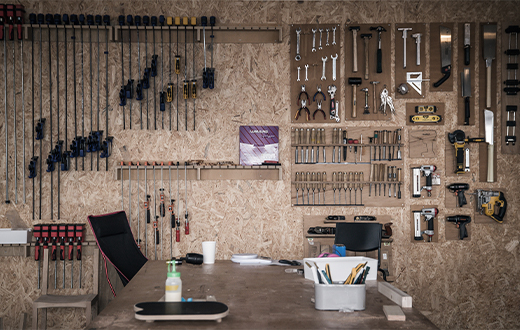 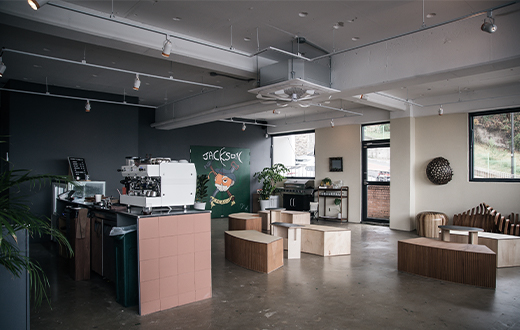 To be on or above the ground level, to be an independent building, to not be swayed by the surroundings, and to have an open view of the ocean. Because of the specificity of furniture making, they needed a space completely separate from the surroundings to avoid issues with noise and dust. Their criteria landed them on the current address. From Jackson Fab, you get a distant but wide view of Yeongdo Island.
The view was too good to be meant only for a furniture studio. They needed a showroom to feature the designer's works, so they decided to open a café as well. Not being in a commercial area and having to rely on the car for visits didn’t stop people from traveling to their shop, all thanks to the amazing view and special furniture products. The chairs, tables, and other wood accessories at Jackson Fab are designed by the four CEOs themselves. Their respective styles and aesthetics are reflected in the furniture’s shapes and details so the range of designs available at Jackson Fab are quite diverse. 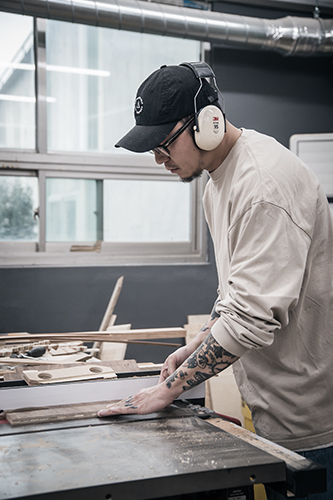 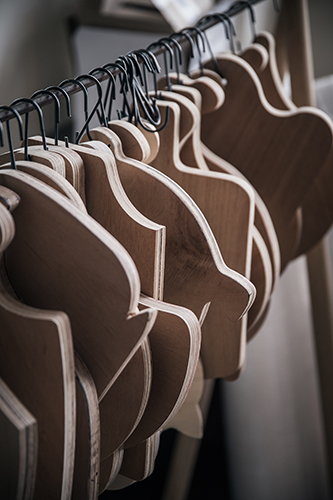 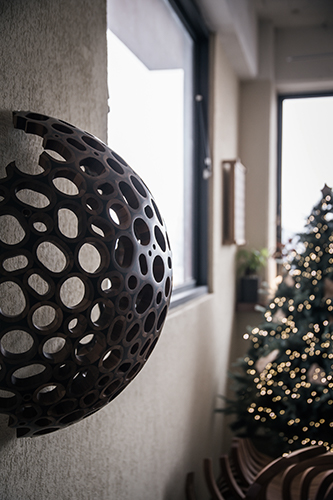 Accessories at Jackson Fab, each reflecting styles of designers

In the workroom inside the cafe, the designers work on custom orders or hold one-day classes to offer visitors a chance to create their own simple wood accessory. The experience is open to anybody who wants some fantastic views of the Yeongdo and downtown Busan areas and an opportunity to watch furniture making from up close.
Have a piece of furniture designed to your style, make your own wooden item, and watch the famous Yeongdo sunset. It’s all possible at Jackson Fab.
Address 39 Beotkkot-gil 2F, Yeongdo-gu, Busan-si
Instagram @jackson__fab 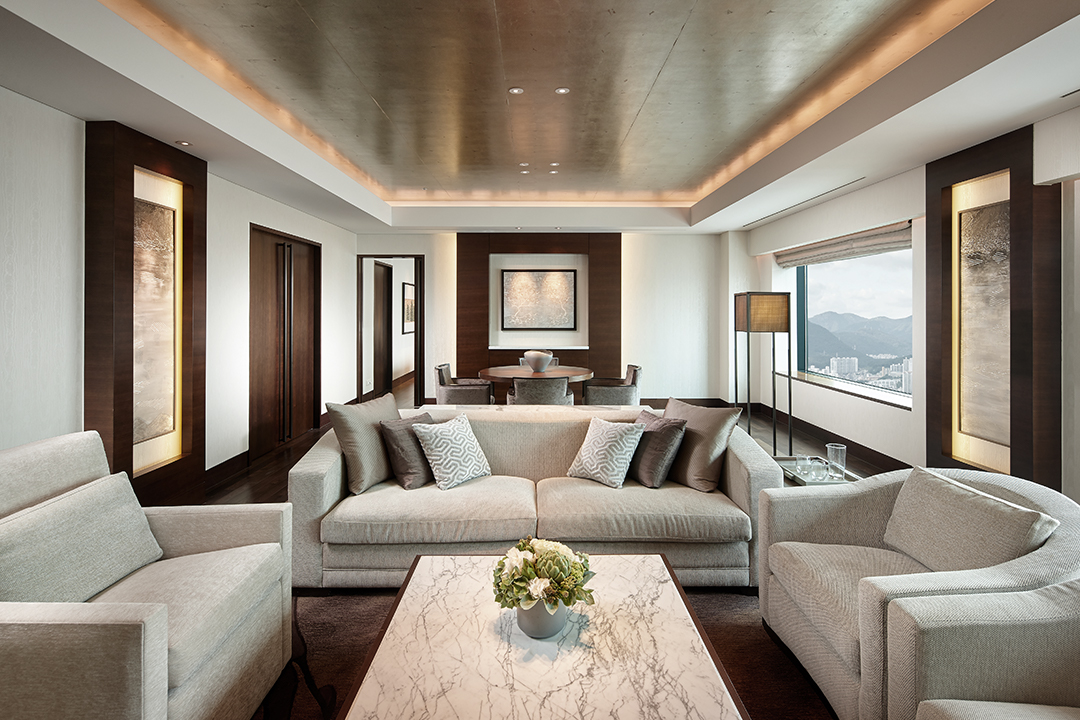 Where to Stay in Busan: LOTTE HOTEL BUSAN
LOTTE HOTEL BUSAN, offering a spectacular view of the city from its Seomyeon location, offers a chance to rest and relax in rooms with contemporary sensibilities and design. You can choose from some 650 rooms, depending on the purpose of your trip, and build special memories of Busan at one of many fine-dining restaurants.
Website www.lottehotel.com/busan-hotel