St. Petersburg Beckons Winter Travelers
St. Petersburg is home to one of the world's greatest art museums, an iconic ballet theater and other spectacular buildings. Russia's second-largest city and its old capital, St. Petersburg is never short on tourists.
Zdravstvuj, Hello
With numerous canals that cut across the city and about 400 bridges of varying sizes, St. Petersburg is called the 'Venice of the North.' The second-largest city in Russia was the country's capital for about 200 years starting in the 18th century. Tsar Peter the Great designated this former Swedish territory his capital and used it as a bridge to the rest of Europe. For the next two centuries, St. Petersburg developed into the political, financial, cultural and artistic center for the Romanov dynasty. It was the largest trading port in Russia and also attracted many great artists and literary minds. Poet Alexander Pushkin called St. Petersburg the 'Window to Europe.' And it wasn't just because of its geographical location. Many of Europe's finest intellectuals and artists flowed into Russia through St. Petersburg. 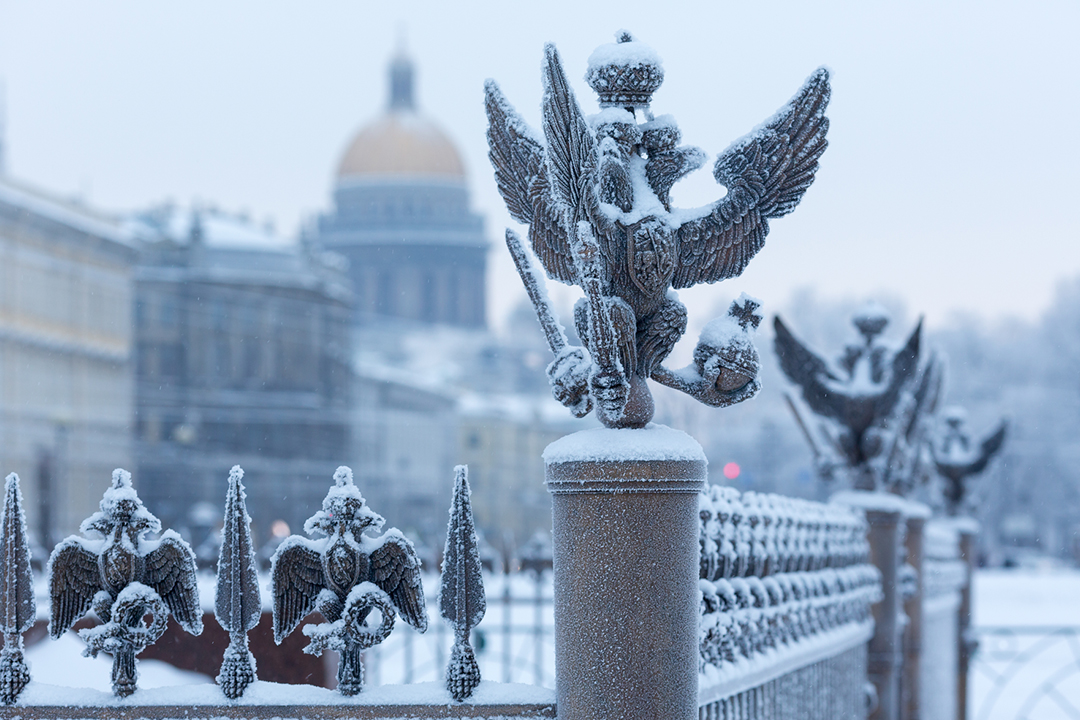 The fence decorated with the double-headed eagle, the symbol of the Russian Empire ⓒ Shutterstock

St. Petersburg is also known as the city of art and romance. From the 19th to the 20th centuries, St. Petersburg was a cradle for a great number of writers and artists. The list includes Nobel Prize laureate Aleksandr Solzhenitsyn, Anton Chekhov, Dostoyevsky, Tolstoy and Pushkin, among other great Russian writers, and legendary composers like Tchaikovsky, Rachmaninoff and Shostakovich. Dostoyevsky penned his novel in a tiny room in Sennya. Tchaikovsky, Rachmaninoff and Shostakovich built their foundation at The St. Petersburg State Conservatory near Mariinsky Theatre. You can still find monuments and other sculptures honoring these composers. 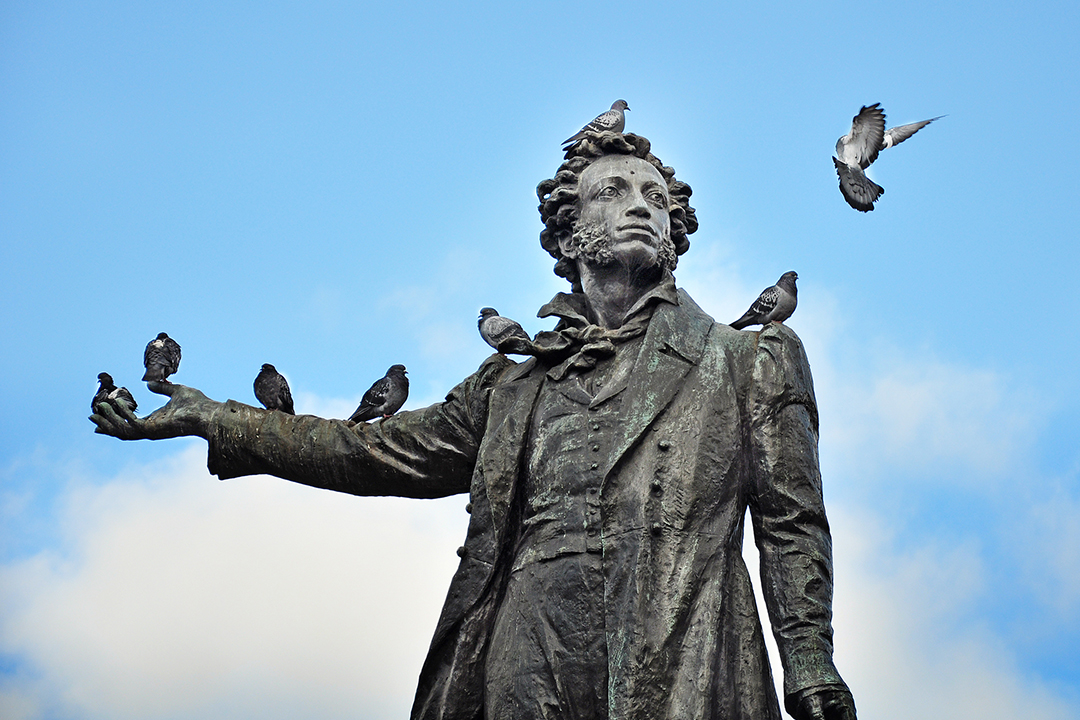 The bronze statue of the beloved writer Pushkin ⓒ Shutterstock

Pushkin, famous for his line, 'Should this life sometime deceive you, don't be sad or mad at it,' doesn't just have a statue. He has an entire town within St. Petersburg named after him. The city loves its literature so much that in June 2018, St. Petersburg State University erected a statue honoring the Korean novelist Pak Kyong-ni (And Lotte Hotel Seoul has a statue of Pushkin). In the 1980s, a documentary film on the legendary Russian rocker Viktor Tsoi was shot in St. Petersburg. If you ever travel there, say hello in Russian (Zdravstvuj). If people recognize that you're Korean, the locals may be extra friendly.

Exterior of the Hermitage 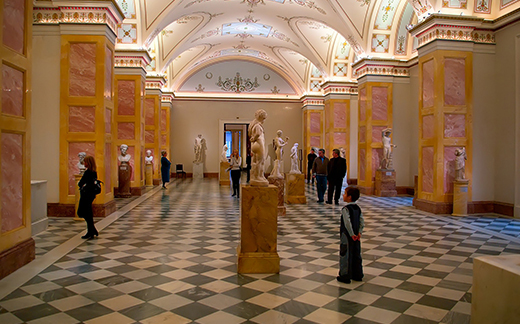 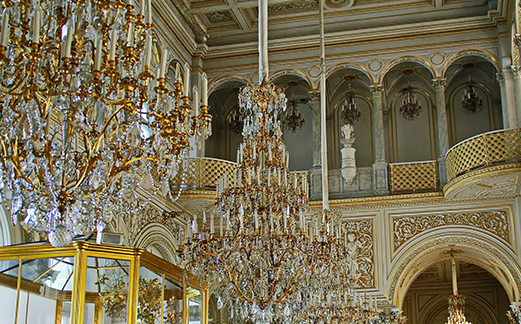 Splendid interiors of the Hermitage

Nice to Meet You
There is much more to St. Petersburg than great writers or artists. The city was developed under meticulous planning and it's home to some magnificent buildings. Architects brought in from France and Italy gave St. Petersburg its beautiful look. There are more than 100 museums, art galleries and theaters in St. Petersburg. It clearly deserves the title as the 'cultural capital of Russia.'
The State Hermitage Museum, built in 1764, is one of the world's premiere art museums, alongside the British Museum and the Louvre. About 4 million tourists flock to St. Petersburg to visit the Hermitage each year. The Hermitage consists of the Hermitage Theatre, the Old Hermitage, the Small Hermitage, the Winter Palace and the New Hermitage. The Winter Palace is what we commonly associate with the museum. The jade-green colored building has dozens of Ionic orders (columns and entablature in classical architecture) and the gold-tinted decorations on the front. Inside, it holds over 3 million works by some of history's greatest artists, such as Picasso, Leonardo da Vinci, Michelangelo, Gauguin and Renoir, and ancient artifacts and Egyptian mummies. 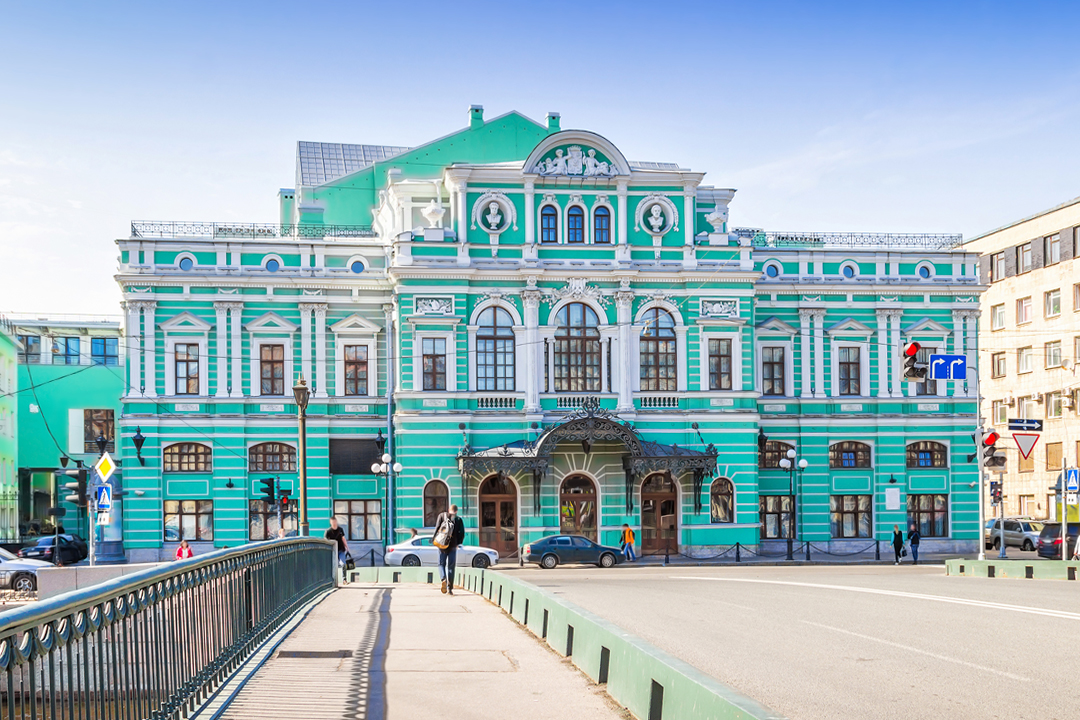 A city of music and dance, St. Petersburg also has dozens of theaters and concert halls. Mariinsky Theatre is the best known one of them all. They say you haven't really been to St. Petersburg if you haven't visited Mariinsky, which hosts world-class ballet and opera every day. Other landmarks include Faberge Museum, which showcases imperial treasures and expensive eggs once owned by the nobility, and Petropavlovskaya Fortress, one of the early works of architecture in the city. For 5,000 rubles at Petropavlovskaya Fortress, you can fly over St. Petersburg in an Mi-8 chopper for 10 to 15 minutes. 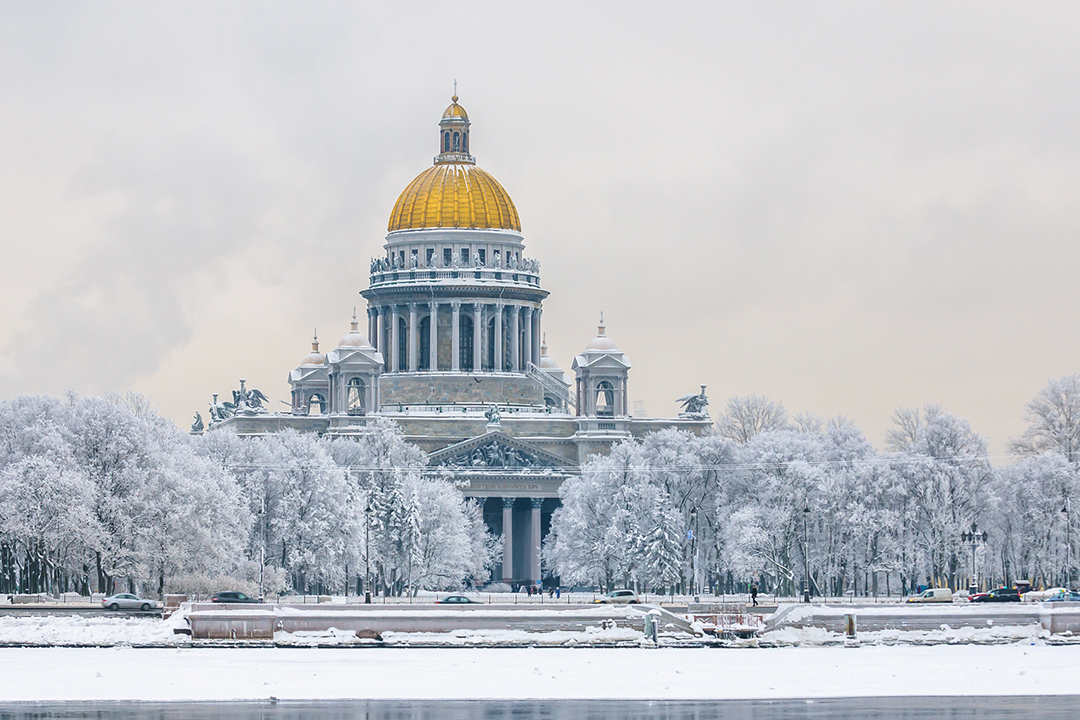 Spasibo, Thank You
Though St. Petersburg is home to so many buildings, Saint Isaac’s Cathedral was the top observatory in the city until the completion of Lakhta Center (the tallest building in Europe at 462 meters) in 2018. Built in 1858, the cathedral stands 102 meters tall, making it one of the largest cathedrals in the city and also one of its oldest landmarks. It was designed by French architect Auguste de Montferrand, and the construction took some 40 years, with over 500,000 people summoned to work. The gold dome at the top was made with more than 100kg worth of gold. And there are plenty of gold decorations and bronze statues inside. The painting on the ceiling of the main dome is the highlight. The painting of the Twelve Apostles is as brilliant as any religious works of art in Europe, in terms of its size and its beauty. 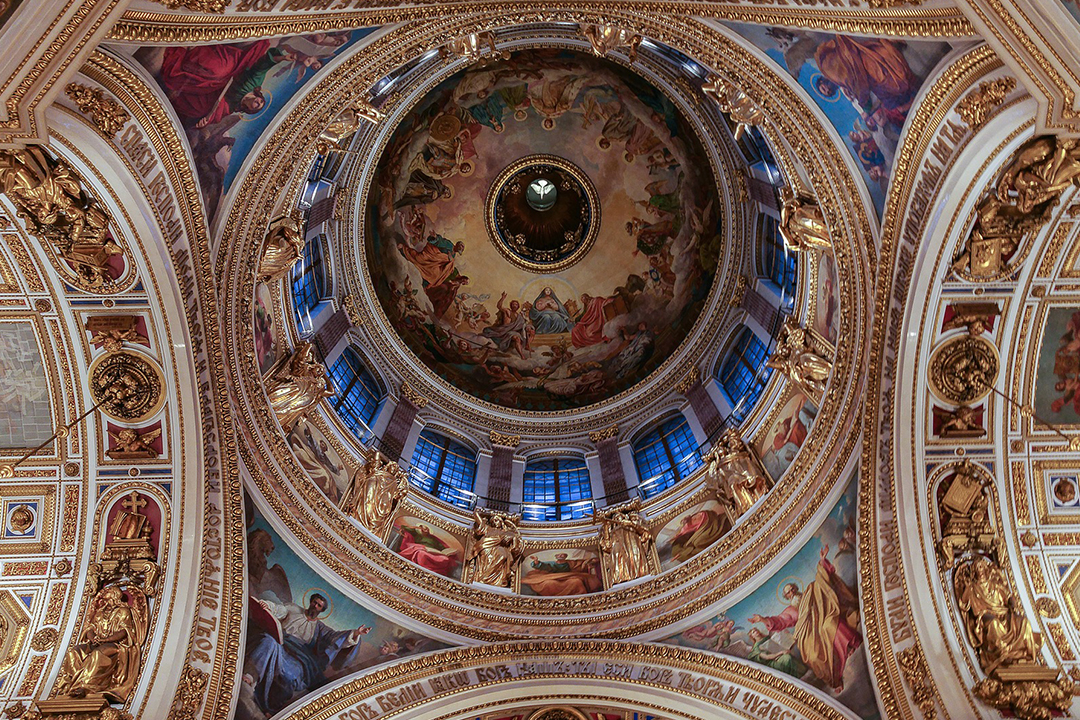 Exquisite painting on the ceiling at Saint Isaac’s Cathedral

Saint Isaac's Square is home to Lotte Hotel St. Petersburg, the only five-star Korean hotel in the city. It stands six stories tall with 150 rooms. The interiors offer a modern reinterpretation of the typical Russian grace and elegance, and give the hotel a classical and sophisticated look. Dining options include 'Megumi,' one of the few places in St. Petersburg that serves the modern Japanese cuisine, and 'The Lounge,' an all-day dining restaurant serving breakfast to dinner under the gorgeous Italian stained glass windows. Rooftop tours are popular in St. Petersburg today. Young travelers who never shy away from new challenge explore the city from the top of the buildings. If you don't have the time for that, visiting Lotte Hotel St. Petersburg's rooftop bar, L Terrasa, could be an alternative. You can sit back at the bar on the sixth floor and enjoy the view of the white nights. 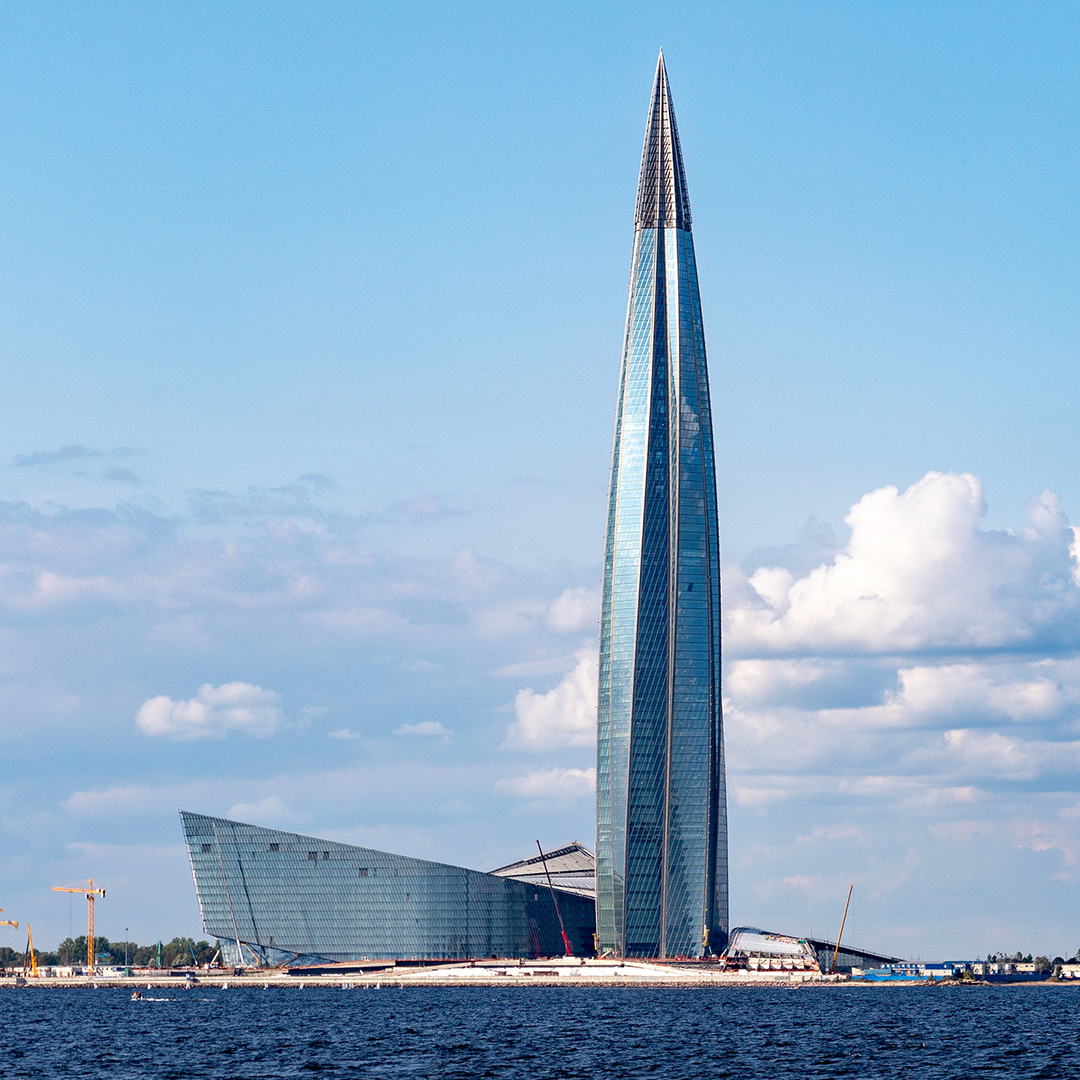 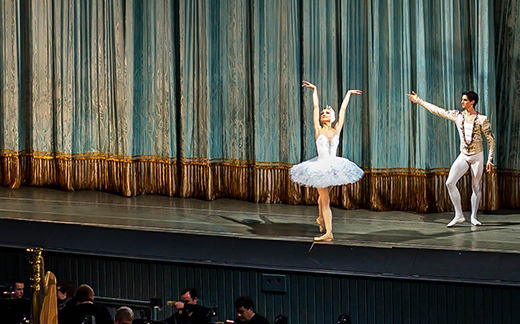 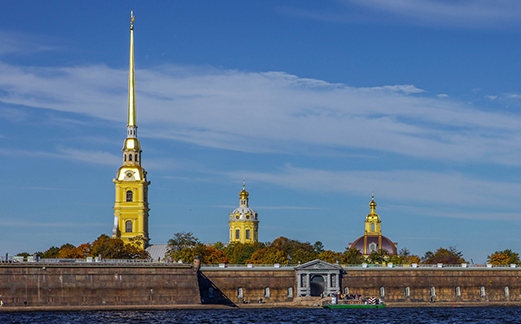 From the Hermitage to the Mariinsky Theatre to Saint Isaac’s Cathedral, St. Petersburg is truly the Russian capital of art and culture. With a blend of the Baroque style and the traditional Russian culture, St. Petersburg will leave you a unique impression, different than any other European city. English may not be spoken widely and the city has such a distinctive, exotic feel to it. But don't let these discourage you. Why don't you open up first and say, Spasibo (thank you)? You will get warm smiles in return.