New Retreat for New Yorkers
A sugar empire from some 150 years ago has been transformed into a popular park in New York in the 21st century. Domino Park is the favorite retreat for New Yorkers and also the Big Apple's hottest place.
New Yorkers' New Favorite Retreat
Soho in Lower Manhattan is now a trendy mecca of fashion, but it used to be an industrial district. Factories emitted exhaust fumes and the air quality was horrendous. But just when it seemed the economy would be booming forever, the Great Depression ruined everything. Factories and warehouses all shut down and were left abandoned, and poor artists started settling down in empty places. That's how lofts in New York came about. Hollywood stars and some of the world's wealthiest inhabit the area now. New York is the center of the global economy but it isn't always about glamour and luxury. New York is surprisingly adept at preserving and reclaiming its relics. Whereas Korea has been busy tearing down old ones in redevelopment projects, New York has done a great job of protecting its old heritage and has constantly improved and preserved it. In addition to lofts, Chelsea Market, Meatpacking and the High Line Park were all born that way. In the 21st century, New York has emerged as the center of urban reclamation. The High Line Park is one of the signature reclamation projects. In 2009, an old elevated rail trail became a park, and New Yorkers take a great pride in it. But with the High Line Park overflowing with tourists, New York residents have turned to another landmark. They've been seeking a new urban retreat to replace the High Line, and they finally have their answer. In August 2018, Domino Park opened on River St. in Brooklyn. 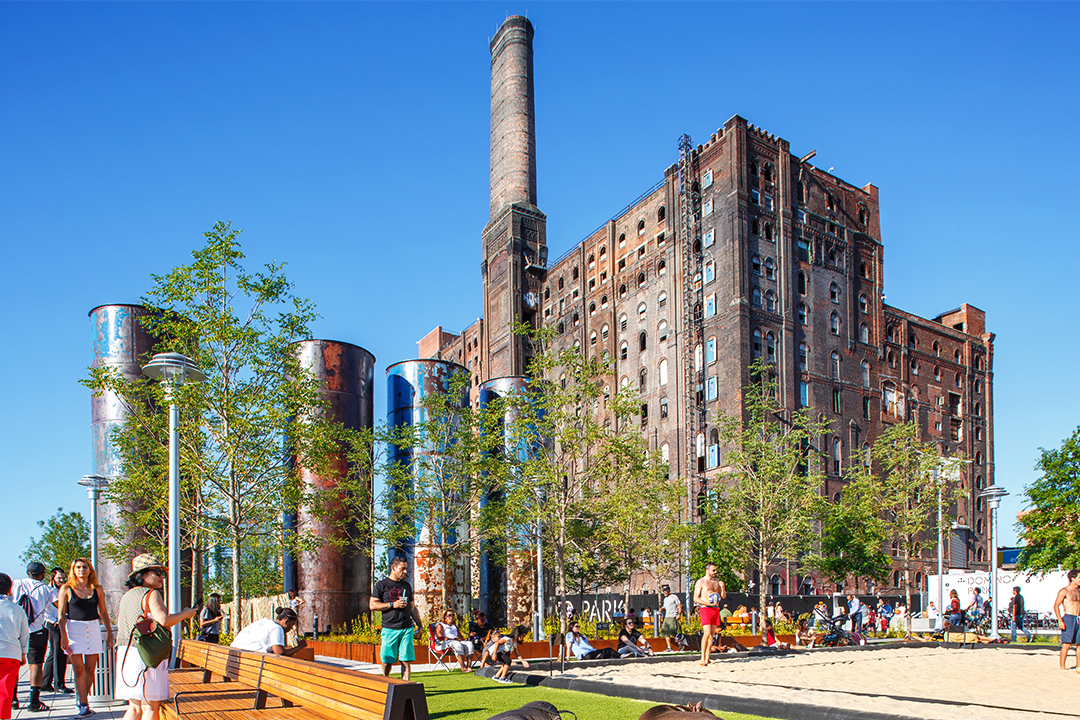 Sugar Empire Becomes Park
Domino Park is at the site of a former sugar refinery. The 15 River St., the address for the park, is only about a 20-minute drive from the High Line. While the High Line is almost too famous for its own good, Domino Park only started gaining its reputation among the locals last year. The Domino Sugar Refinery, which opened in 1856, was so large that you couldn't miss it if you were anywhere near the area. It produced more than 1,800 tons of sugar, and accounted for 98 percent of all sugar consumed in America, earning the moniker 'Sugar Empire.' The business boomed for about a century. The factory even survived the Great Depression, but not the test of time. The factory closed in 2004 under heavy deficits. 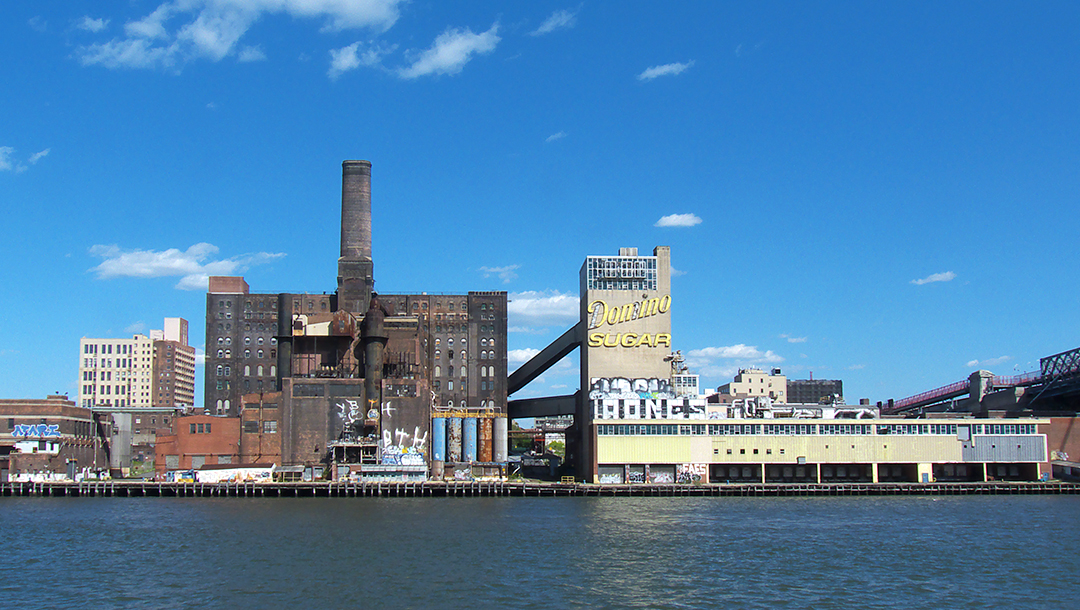 The massive site, highlighted by red bricks and scrap iron that seemed almost hideous, was once again filled by artists. They built giant sugar installations to commemorate black slaves who were killed in the area in the past, and their artworks start attracting attention. They breathed new life into the area.
In 2012, Two Trees Management Co., a Brooklyn-based real estate developer, purchased the former factory site, launching the project to turn the site into a park. The plans included residential buildings with 700 units of affordable housing for the low-income group. The company also wanted to build a park stretching for 20,000㎡ and office space for some 2,700. Rather than the city, Two Trees Management agreed to handle maintenance, repair and operations of the park and keep it free to the public. 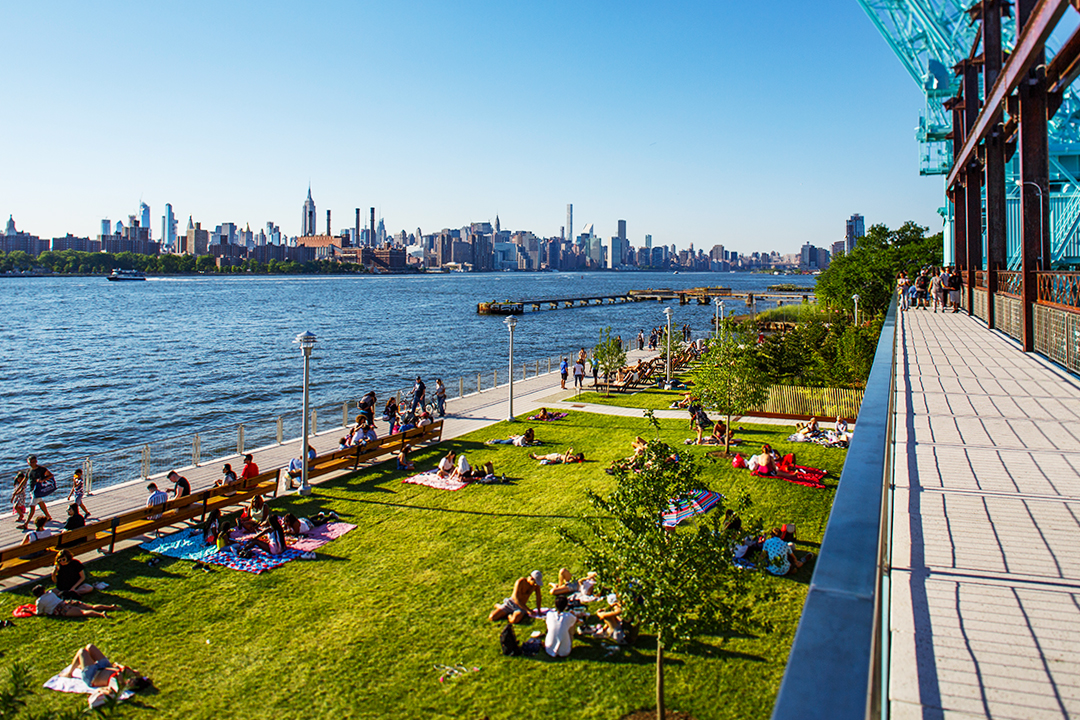 Past, Present and Future
The reclaimed Domino Park has such unique charm, even with some of the old facilities preserved. Most of the factories that occupied more than two-thirds of the site are gone, but syrup tanks, mooring bollards, cantilevers and screw conveyors are still there as remnants of the sugar empire that ruled the world from the 19th century to the mid-20th century. You can find even more vivid evidence at the north end of the park, with the two jade-colored cranes, each standing 24.3 meters tall. The screw conveyors that once carried sugar and mooring posts have also been colored jade for consistency with the cranes. The refinery building standing in the middle of the park cuts a striking figure. The Filter House, the Pan House and the Finishing House were connected with one another. The building's distinctive, classical feel that will remind you of the 19th century industrial age, and the towering brick smokestack earned it the landmark status in 2007. Most other factories only have their frames remaining, and only the refinery building has been fully preserved. 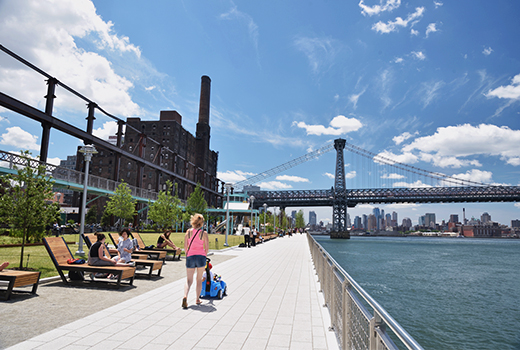 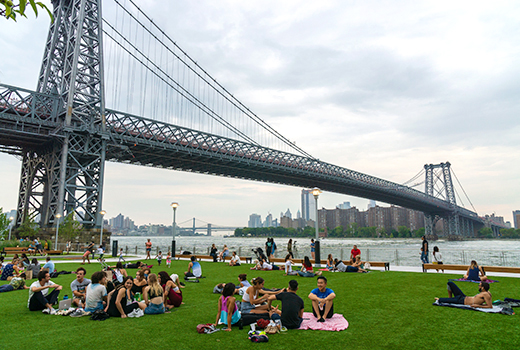 New York comes to life at dusk, thanks to people coming out of their work places and into the streets. And around this time, Domino Park will start welcoming people seeking a little urban getaway. In the playground on one corner of the park, you will see Sugar Cube Centrifuge by Brooklyn-based artist Mark Reigelman, and children come down on the tube like sugar. Later in the evening, visitors will pick up some Mexican food from Tacocina, by Shake Shack Burger founder Daniel Meyer, and wash it down with beer, wine or tequila. 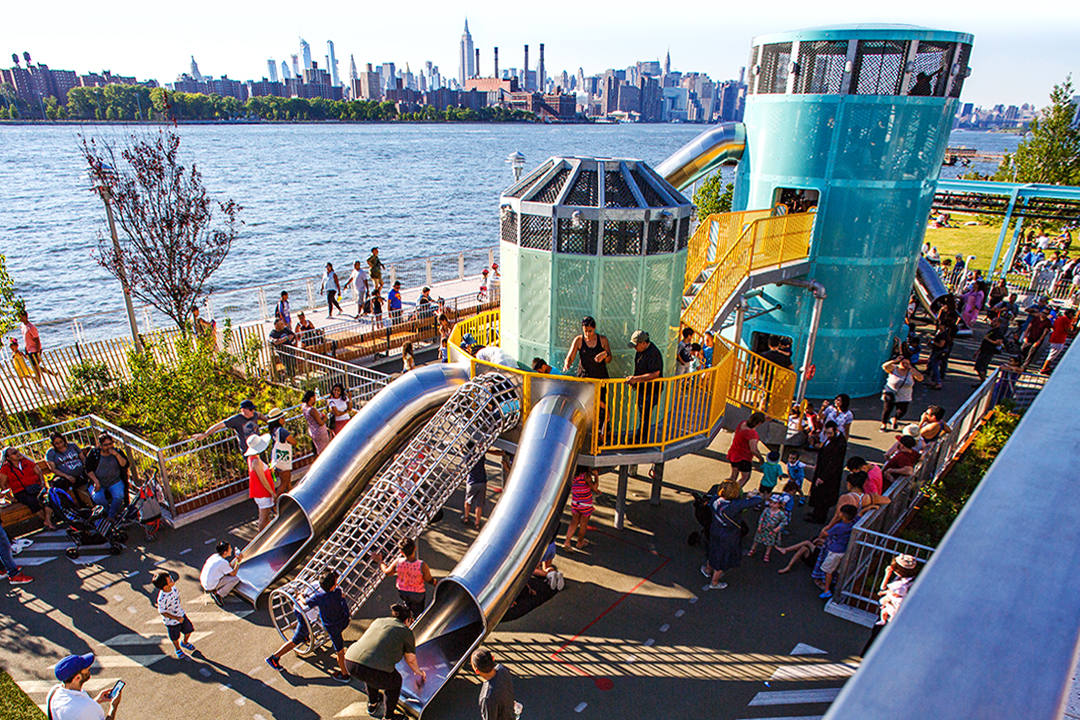 The long walk that cuts through Domino Park will bring the Williamsburg Bridge, the pride of River St., into the view. Sonny Rollins, a jazz saxophone legend, was thought to be so much in love with the bridge that he often enjoyed walks alone. Rollins played his saxophone there, and the cover of his classic album features the artist playing on the bridge. Long-time fans of his music frequent the bridge in Rollins' memory. 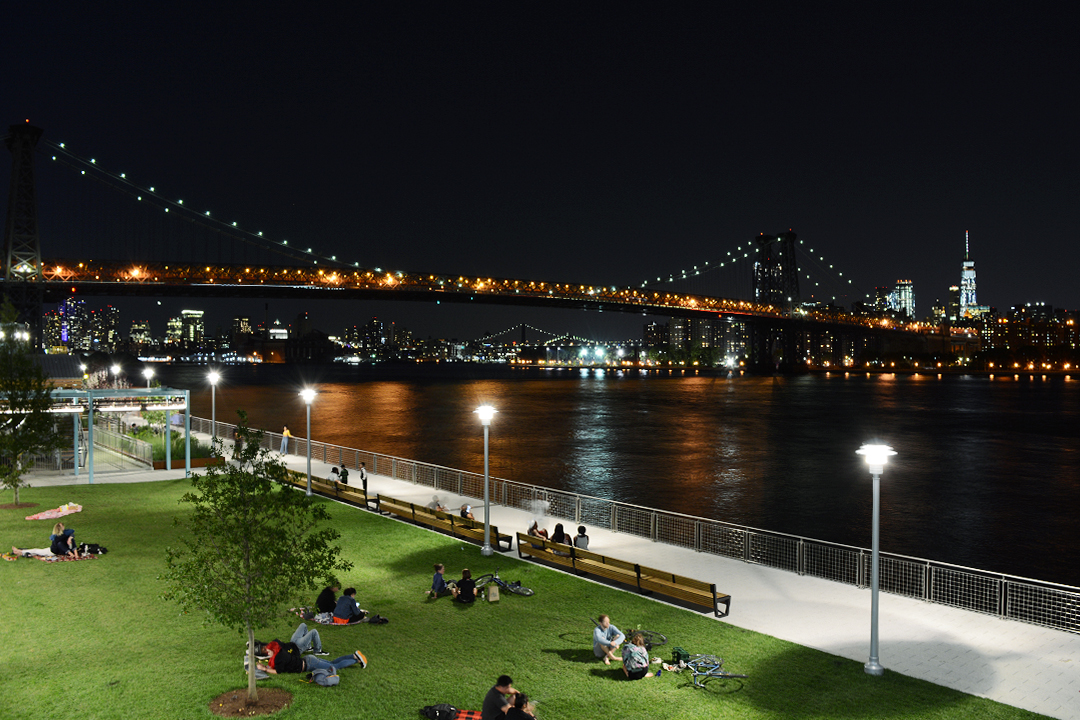 Any place we go, it contains signs of time and memories. And reclamation projects aren't just popular because of their eco-friendly nature. Preserving and developing heritage is the most beautiful thing that the modern architecture can do for future generations. Some will take a walk through the park and look back on the glory days of the sugar empire. Others will learn about the hardened life of slaves. And there will be people who will think of Sonny Rollins and his saxophone. Domino Park is there for people to walk down the memory lane.