How to Greet Spring in New York
Orchids are the sign of spring in New York. Around every February and March, New York Botanical Garden, one of the largest of its kind in America, will host the Orchid Show. It's a chance to see rare species and enjoy a unique night show.
When spring comes, everything comes to life, and flowers start to bloom on trees. Of all types of flowers, the orchid has such refined fragrance and graceful form that in Korea, it's been regarded as one of the Four Gracious Plants. The orchid is also popular in other parts of the world, and it's the best-selling plant in America. In Hilo, Hawaii, orchid planting and cultivation is so active that it's called the 'island of orchid.' The annual Orchid Show at New York Botanical Garden sells out every spring, a testament to Americans' love for the plant. 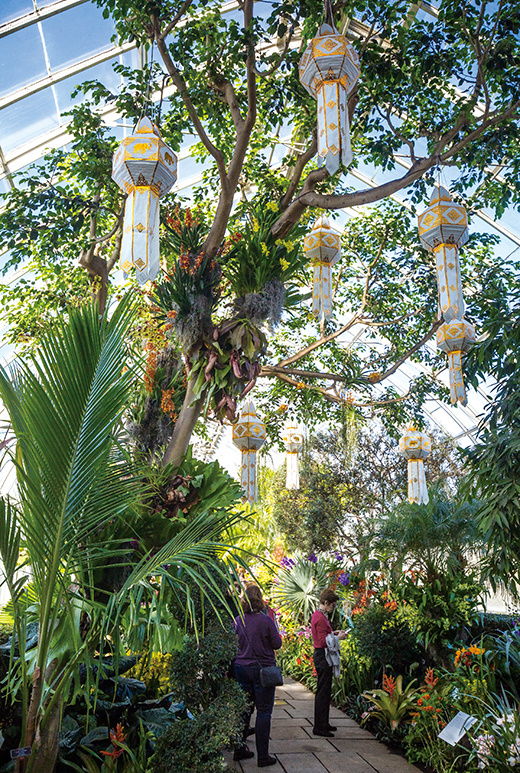 The scent of orchids is a sign of spring in New York. The Orchid Show at New York Botanical Garden will bring together rare species from around the world.
The Largest Orchid Exhibition in the U.S.
Of five boroughs in New York, Bronx used to be a notorious hotbed of crime and drug trafficking. It became almost uninhabitable, and streets were full of abandoned homes and homeless people. African-Americans changed everything. They created hip-hop, b-boying and graffiti culture to give Bronx a new identity. This was the birth of the 'Urban Culture.' Bronx is famous for a culture as diverse as the makeup of its population. It's home to Yankee Stadium, one of the best-known ballparks in Major League Baseball, Bronx Zoo, the world's second-largest zoo that opened in 1899, and the aforementioned New York Botanical Garden. Founded in 1891, the garden holds some 15,000 species of plants over 1 million ㎡. It's among the largest of its kind in the United States, along with United States National Arboretum in Washington D.C. and Chicago Botanic Garden. 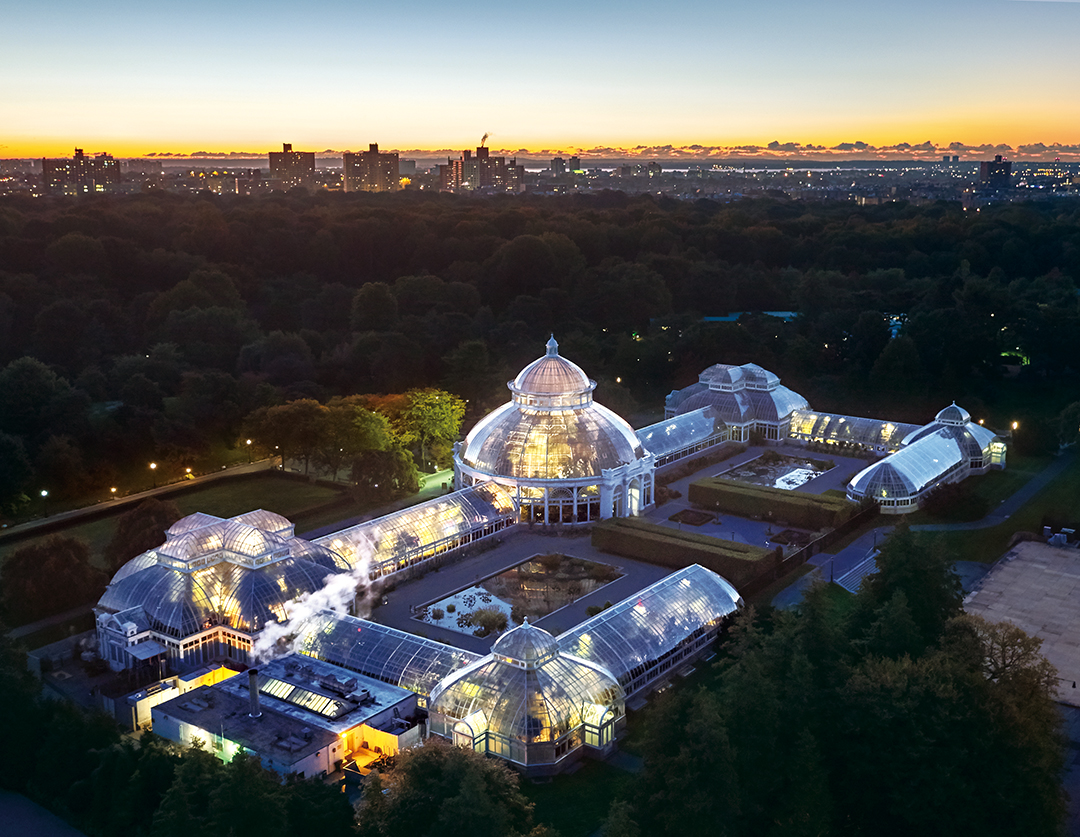 New York Botanical Garden attracts 1 million visitors annually, and it's ready to welcome them with all sorts of events. The Holiday Train Show, held during the Christmas season, and the Orchid Show, which signals the arrival of spring, are the two best-known events. The Holiday Train Show features landmark buildings in New York made of tree bark, flowers and dried fruits. The highlight is watching model trains travel past these buildings across the garden. The Orchid Show, which was first held in 2003, takes place around February and March every year, showcasing orchids from around the world. Rare species from Cuba and Brazil have been featured. With about 150,000 visitors each year, the Orchid Show is the largest orchid exhibition in the U.S. 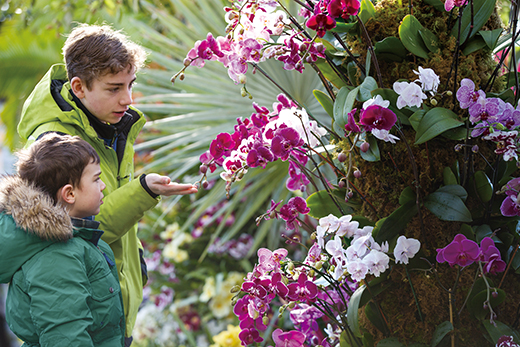 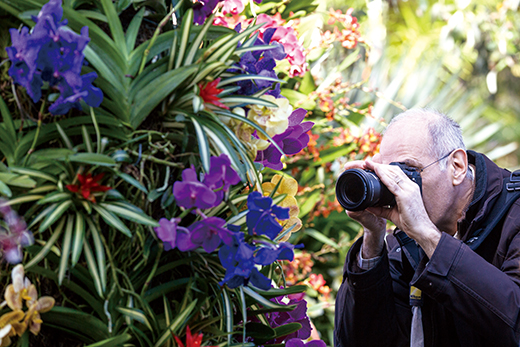 Singapore Blossoms in New York
This year's show will focus on Singapore, which is one of the biggest orchid-loving nations in Asia. The orchid is the official national plant of Singapore, and you can find the image of the orchid on Singaporean coins. And the orchid has also played a role in diplomacy there, as the country organizes an event to name an orchid after distinguished figures and plant it at the National Orchid Garden. Queen Elizabeth II and Nelson Mandela have been honored, along with Korean actor Bae Yong-joon. Last year, Singapore named new plants after Korean President Moon Jae-in and First Lady Kim Jung-sook. And this year's Orchid Show in New York Botanical Garden will pay tribute to Singapore's love of the plant. The exhibition was developed in partnership with Gardens by the Bay in Singapore and Singapore Botanic Gardens. 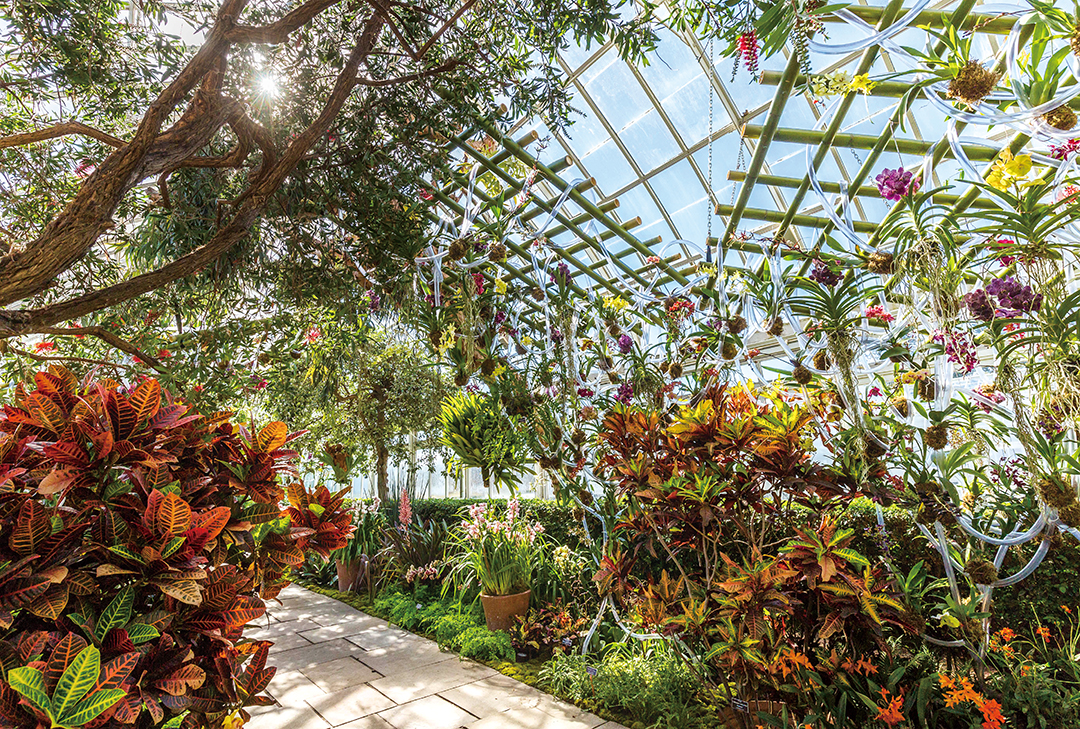 This year's event will feature endangered species and thousands of other orchids owned by New York Botanical Garden. They'll be joined by all sorts of interesting orchids from Singapore, which has been active in orchids hybridization and research. There will be a special place set up in commemoration of Super Tree, the symbol of the Singaporean landmark, Gardens by the Bay. 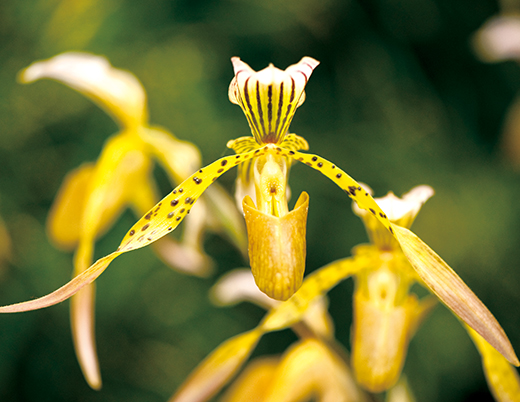 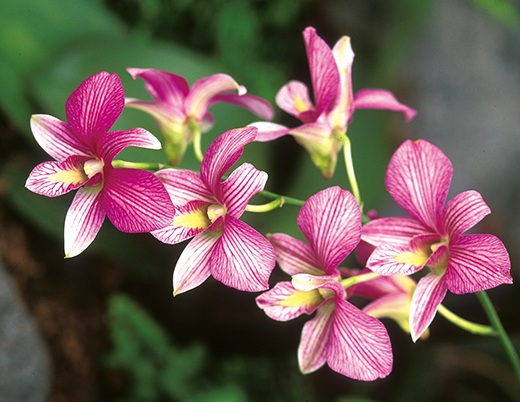 'The Orchid Show: Singapore' also has tour programs and events lined up. During the Orchid Insiders Tour, held at 12:30 p.m. every day, expert guides will introduce you to the biology of Orchidaceae and to current orchid research projects undertaken by scientists at New York Botanical Garden. In Orchid Care Demonstration, the garden's orchid experts will show you how to take care of your orchid plants and combat insects. On March 16-17 and again March 30-31, you can pick up some valuable information on grow orchids that will tickle your nose and stimulate your senses. 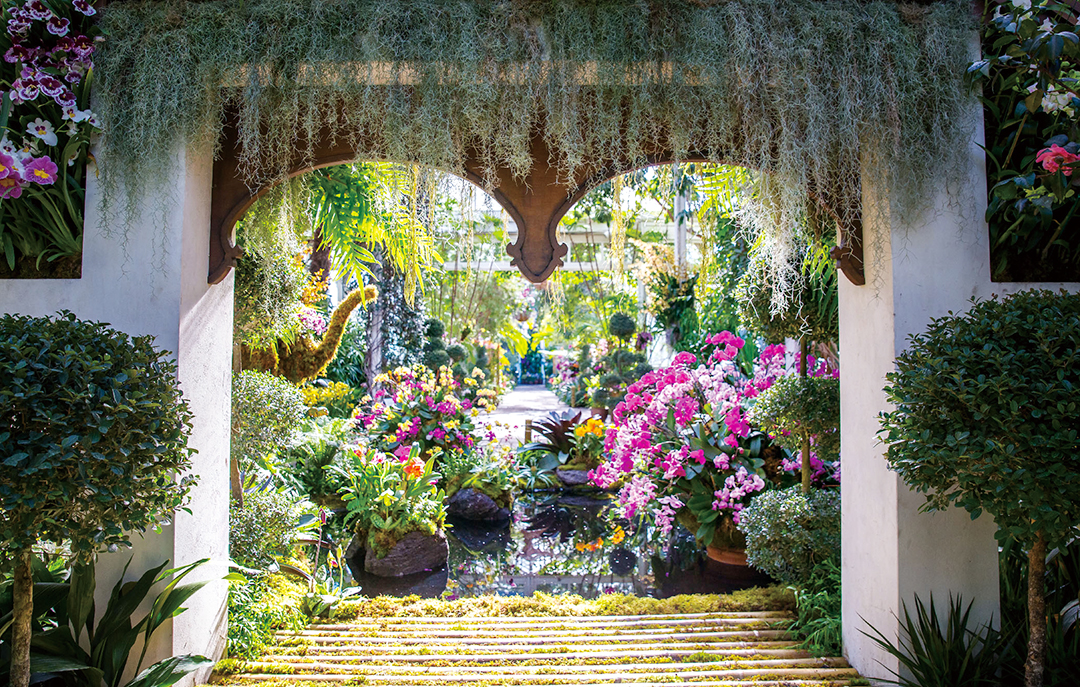 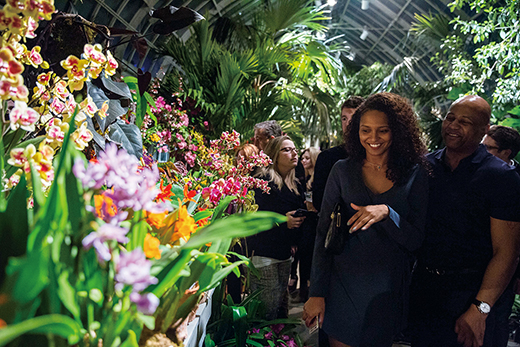 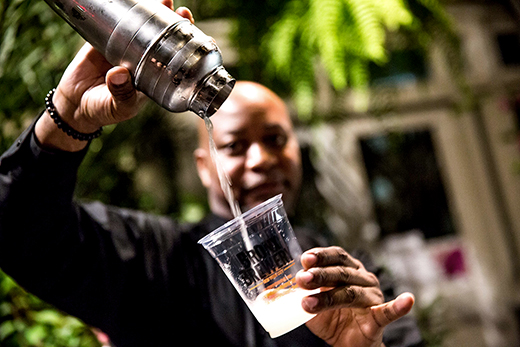 The family-friendly atmosphere is thrown out the window, as the garden becomes crowded with people decked out in evening dresses and wearing fancy accessories. DJs will be putting on music on one side, and bartenders will be serving drinks at the other. The garden will be flooded with colorful neon lights, and special performances will be held. It's not hard to spot couples taking selfies with orchids in the backdrop and a cocktail or a beer in hands. During Orchid Evenings, New York Botanical Garden becomes one giant salon or club. 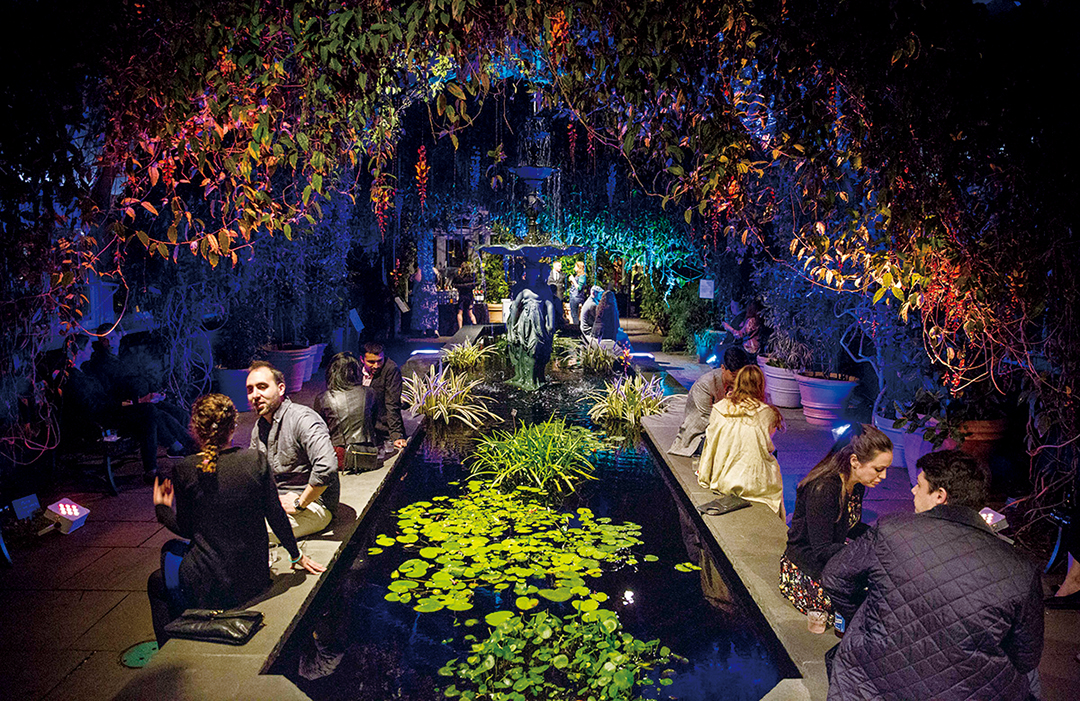 The orchid has been around for 120 million years. It has evolved far more often than human, and has taken roots in every corner of the world, except for the polar regions. It's one of the most beloved plants in the world. China has been cultivating orchids for 3,000 years. From the 18th to the 19th centuries, orchid collecting became so prevalent in Western countries that many lost their lives while in pursuit of orchids in China and India. The orchid is particularly tough to bloom. But once it does, the fragrance is better than any flower you'll grow. This year's Orchid Show runs from Feb. 23 to April 28 at New York Botanical Garden. Don't miss your chance to see rare species that have shared their history with mankind.