[DAYTRIP] Buyeo, Tracing History of Baekje
Baekje was one of the Three Kingdoms that fell in 660, and Buyeo was Baekje's last capital. We headed out to the historical city where time stands still. We took a day trip as we traced the history of the ancient kingdom.
The name 'Buyeo' is still very much in use today, but for some reason, it sounds like a name long lost in history. Buyeo was once called Sabi. In 538, Baekje moved its capital to Sabi Palace. And over the next 122 years, the palace remained central to the history of Baekje. This was well over a century ago. And even in the modern era, Buyeo continued to be known for decades as the capital of Baekje. It's difficult to think of Buyeo as anything other than Baekje's capital. And for years, most of the town remained designated as areas of restricted development. There aren't any landmark skyscrapers that can change the skyline. You'll hear many stories about constructors breaking ground, only to find cultural relics and halt their project. For all intents and purposes, Buyeo is very much a quiet rural town. No one ever seems to be in a hurry, and you'll never hear anyone honk their cars on streets. The best way to learn more about Buyeo is to trace the history of Baekje throughout the town. 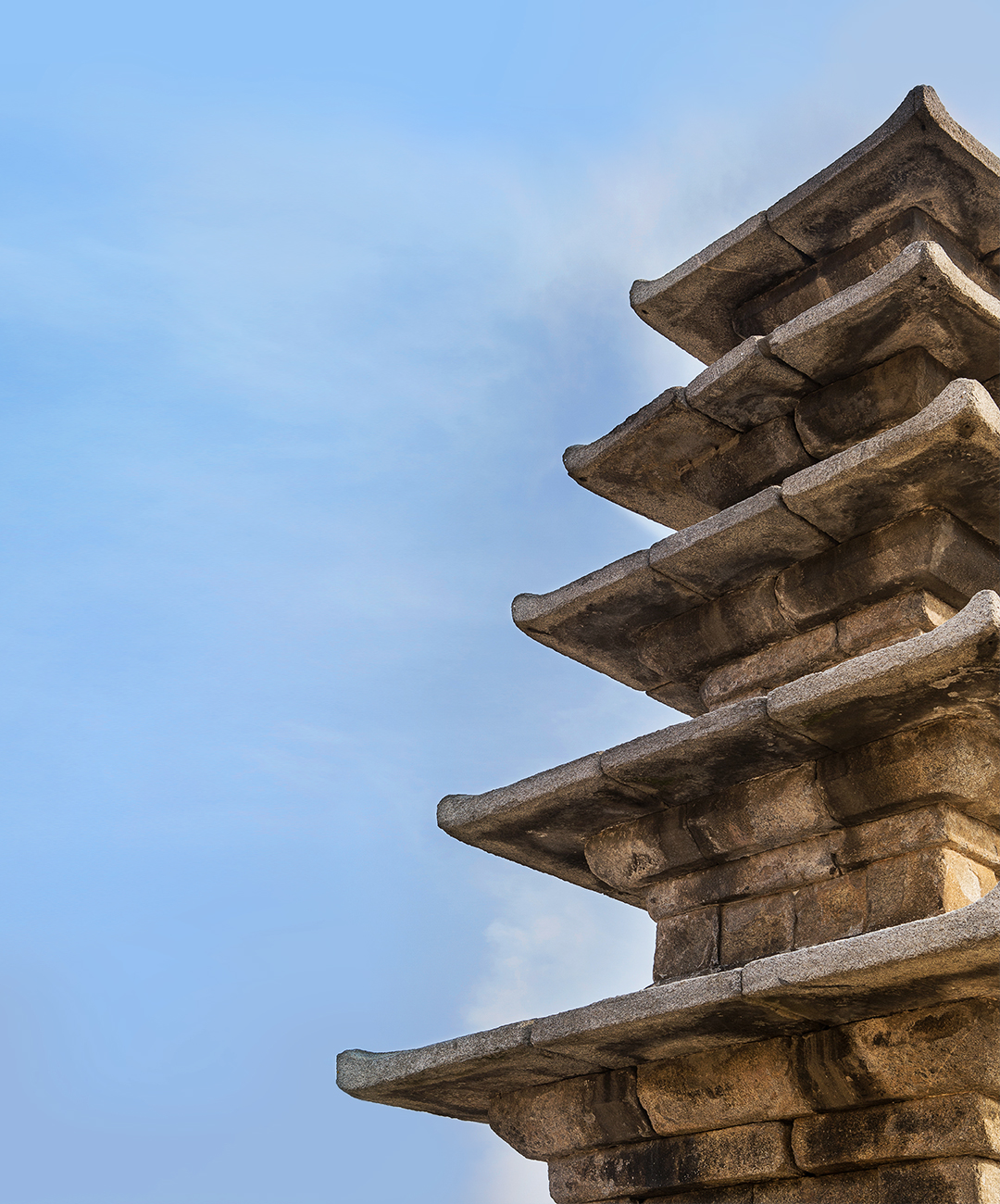 [2 PM] Journey to Baekje Begins at Neungsan-ri Ancient Tombs
In his seminal book “My Pilgrimage to Cultural Heritage”, Yoo Hong-jun, art critic and professors, wrote, "Whether you start from Seoul, Gwangju or Daegu, or whether you pass through Gongju, by three or four in the afternoon, you have to start your trip to Buyeo at Neungsan-ri Ancient Tombs." That way, you'll feel like you're entering a royal territory and you've arrived in Baekje. We heeded Yoo's advice and visited the tombs at the foot of the mountain in Neungsan-ri. In particular, seven of them are neatly arranged. There are two rows of three tombs with the other one on top of them. These tombs are said to be those of kings, though it's not clear which ones. Walk up the hill and look down upon the tombs, and it's a sight to behold. All you see in this tranquil area are the tombs that resemble hills. But it feels like time has stopped in between them. It compels you think about life and death. You may even begin to wonder if the start of the journey could be this low-key. But anyone who visits Buyeo will soon realize that we all have to learn how to keep our excitement in check and to meditate.

Travel Tip These are stone chamber tombs that provide a glimpse into how memorial services were held in late Baekje period. You can get a look at the sample at Neungsan-ri Miniature Museum. At Neungsan-ri Temple Site, west of the tombs, Baekje Gilt-Bronze Incense Burner was discovered. The site is also connected to Naseong Fortress.
Address 388-1 Neungsan-ri, Buyeo-eup, Buyeo-gun, South Chungcheong Province 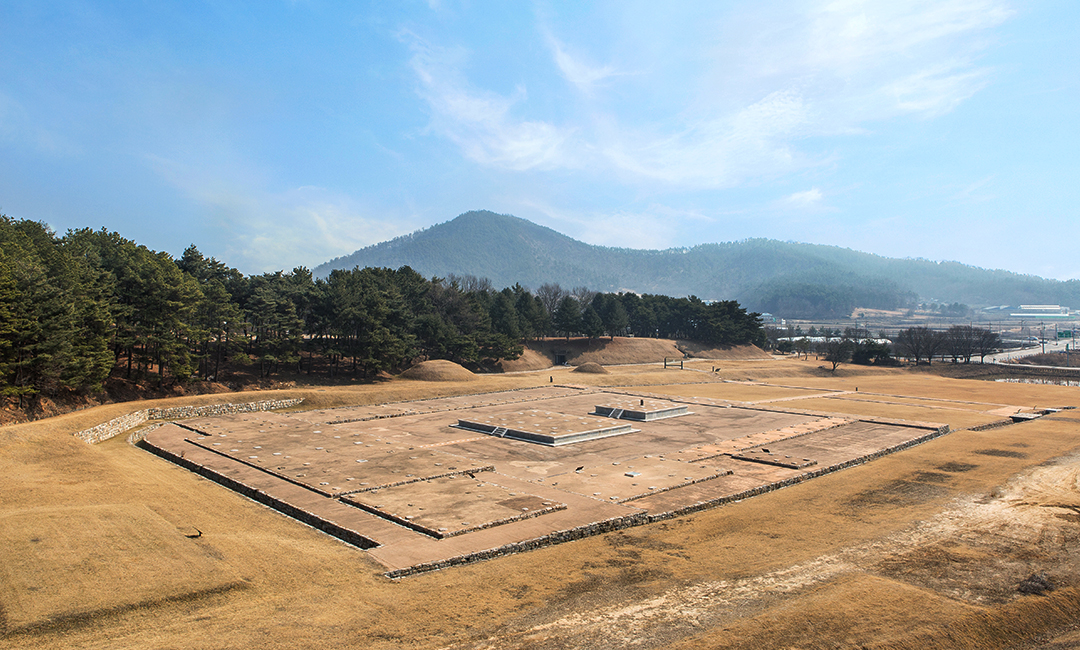 [4 PM] Watching Sunset from Nakhwaam Rock at Busosanseong Fortress
We checked the time of the sunset, and started moving toward Busosanseong Fortress two hours ahead of time. Buyeo is at its most beautiful when you see the sunset from the fortress. Busosanseong was a fortress during Baekje and is located up at Mt. Buso. It was put up to protect the capital city of Sabi, and it apparently took the current form around 605. Inside the fortress, you will see towers like Youngilru and Banwolru, and Nakhwaam, a significant part of the legend of King Uija, the last ruler of Baekje. Walk through Busosan Gate and follow the path on the right, and you'll pass Samchungsa Temple, Youngilru, Gunchang site and Banwolru, before reaching Nakhwaam and Goransa Temple. Baekma River flows next to the fortress. It's the name of the Geumgang River that flows around Buyeo. From Banwolru, Nakhwaam and Goransa, you will get a full view of the river. Look down at the river at dusk, and you'll see why that river is called 'Geum,' or gold. It really does glitter like gold. With the gentle chirping of birds, the greenest of green pine trees and the glittering river in the backdrop, the time spent at Busosanseong Fortress is truly golden. 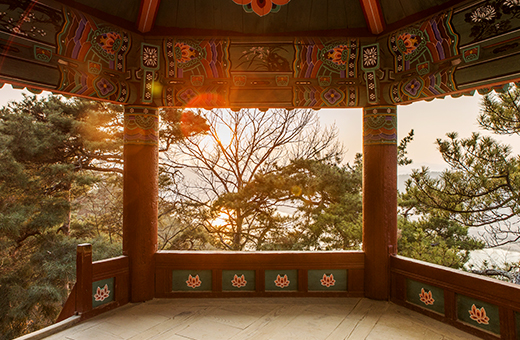 Travel Tip Busosanseong Fortress is 106 meters above sea level and it's a comfortable climb. But the stone stairs to Nakhwaam are steep, and it takes about two hours to cover the whole area. Be sure to put on comfortable shoes. The cliff of Nakhwaam is best seen from the sail boat that leaves from the dock by Goransa Temple.
Address Gwangbuk-ri, Buyeo-eup, Buyeo-gun, South Chungcheong Province
[7 PM] Wrapping Up the Day with Night View of Gungnamji
Gungnamji is the oldest manmade pond in Korean history, having been built during the Baekje period. In “History of the Three Kingdoms”, there is a record of digging a pond south of the palace, bringing in water from far out, planting willows and building an island in the middle of the pond. A pavilion called Poyrongjeong sits in the middle of the pond and is connected with a bridge. After the sunset, Poryongjeong, the bridge and the areas surrounding the pond are lit. Soaking in the night view of the lit Gungnamji is a nice way to cap off a day in Buyeo. In summer, the pond gets full of lotus flowers. The lotus is the symbol of Buyeo, and it all began at Gungnamji. 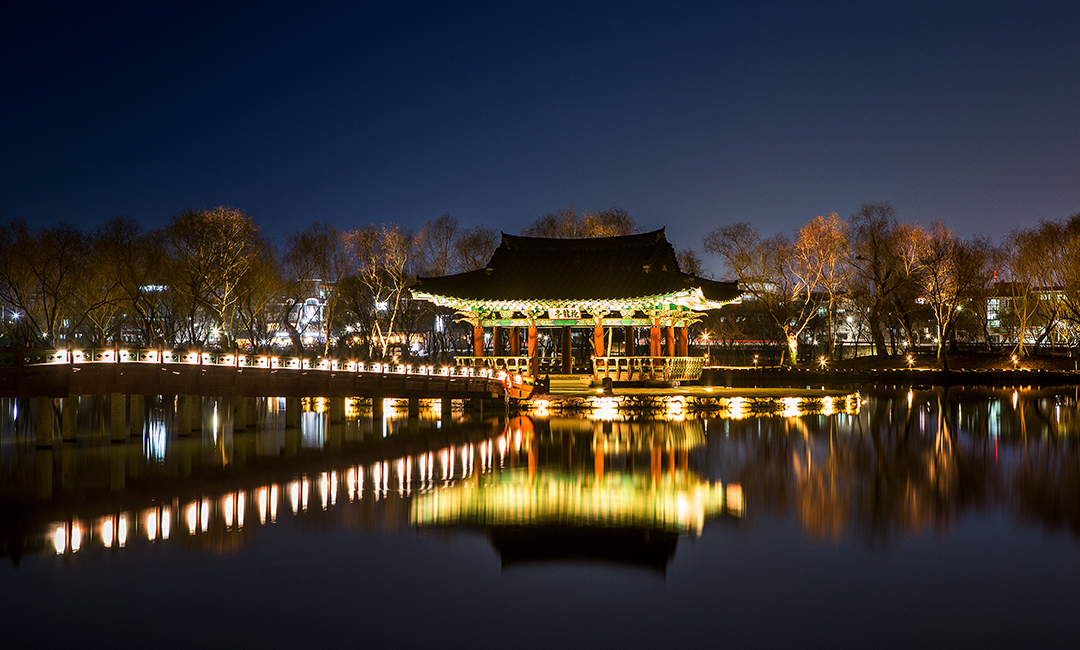 Travel Tip Buyeo Seodong Lotus Festival is held each July around Gungnamji.
Address 52 Gungnamro, Buyeo-eup, Buyeo-gun, South Chungcheong Province
Where to Stay in Buyeo: LOTTE Resort Buyeo
LOTTE Resort Buyeo is about a 20-minute drive from Gungnamji. Standing 10 stories high with one underground floor, LOTTE Resort Buyeo has 310 rooms. It's perhaps the tallest building you'll encounter in Buyeo. The horseshoe-shaped exterior features more than 300 colorful panels. They are colors that we easily find around us in Korea, making the building neat and uniquely beautiful. Whereas most buildings in Buyeo turn their lights off at the sunset, the Premium Outlet near the resort will stay open late into the night. Inside the resort, families enjoy late dinners at the restaurant Bondimaseul. You can see a whole new side of Buyeo at LOTTE Resort Buyeo. When you find yourself amid the mix of the traditional and the modern, the silence and the noise, you'll once again feel your heart beating fast with the thrill of the journey. And you can sleep on those feelings. 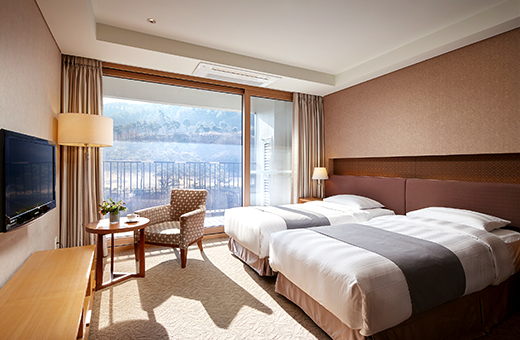 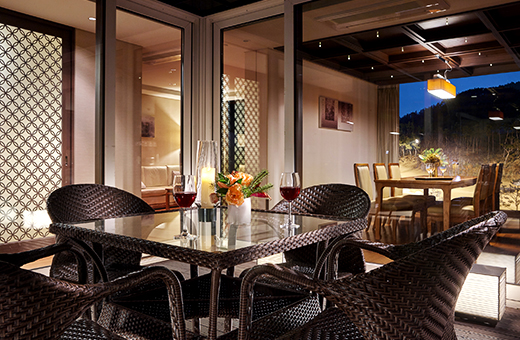 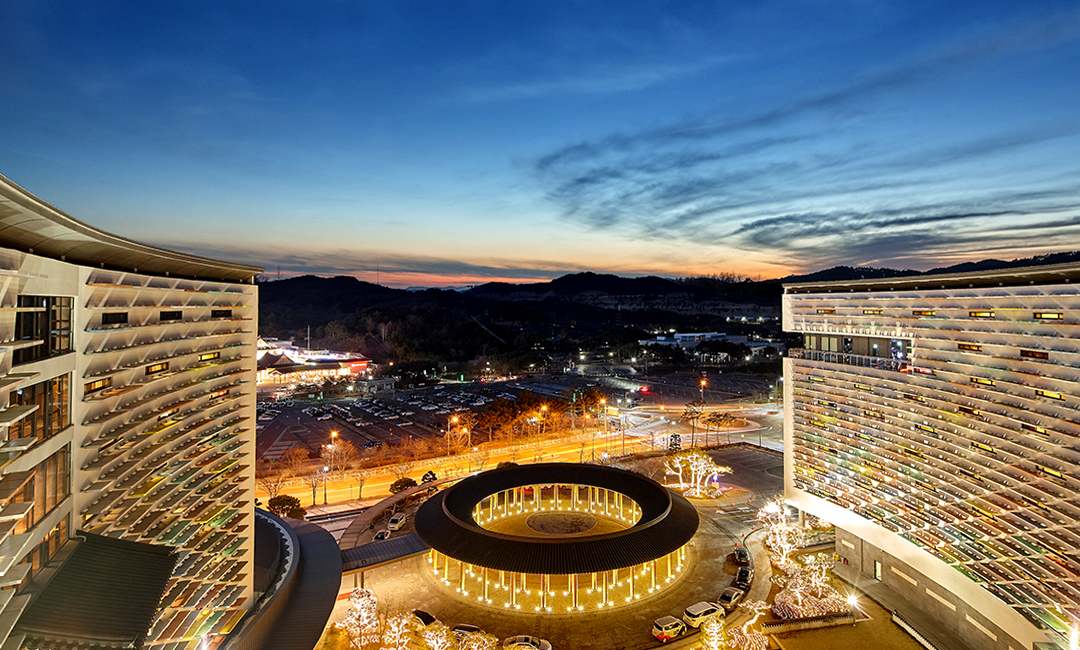 Address 400 Baekjemun-ro, Gyuam-myeon, Buyeo-gun, South Chungcheong Province
Phone +82-41-939-1000
Website www.lottebuyeoresort.com
[9 AM] Seeing Beauty of Baekje with Five-Story Granite Pagoda at Jeongnimsaji Temple Site
You'll have to see it to believe it: that the five-story granite pagoda at Jeongnimsaji Temple Site is absolutely majestic. The pagoda stands in the middle of the temple site. It was originally erected inside a corridor and people had to get through the inner gate to see it. Everything else is gone now, and the pagoda is there to be seen from distance. It's difficult at first to get a sense of just how tall it is. You have to get closer to really feel its size. It stands 8.33 meters tall. A typical grown-up wouldn't even come up to the top of the first level. The pagoda exudes dignity and grace. The roof stones stretch out horizontally and are pointed upward at the end. There's also subtle beauty to the proportional heights between different levels. Professor Yoo Hong-jun called the pagoda "a symbolic relic of the Baekje aesthetics that had just the right amount of modesty and restraint" and "a great piece of work." If you travel to Buyeo and don't see the pagoda, you haven't really seen remnants of Baekje. 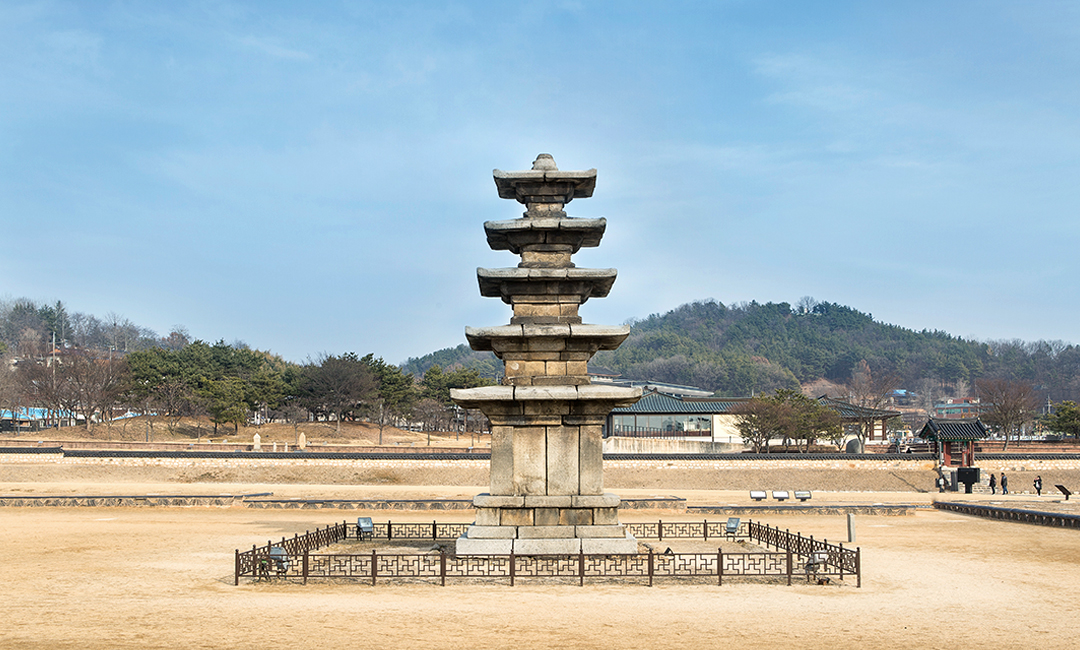 Travel Tip Jeongnimsaji Museum stands next to the pagoda. You can learn more about the temple and the Buddhist culture of Baekje.
Address 83 Jeongnim-ro, Buyeo-eup, Buyeo-gun, South Chungcheong Province
[11 AM] Studying Baekje Culture at Buyeo National Museum
Now it's time to take even a deeper dive into the Baekje culture, now that you've seen the beauty of it from the pagoda. Buyeo National Museum is located across the temple site. It is a modestly-sized museum, but it's full of relics that will help you understand the culture and aesthetics of Baekje that greatly influenced the cultural development of Japan. The museum has its roots in the Society for Preservation of Buyeo Relics. The museum originally opened in 1970 at Mt. Buso but settled in the current location as the amount of relics continued to increase. The museum concentrates solely on the culture and history of Baekje cultural areas, with Buyeo at the heart. There are four permanent exhibition halls, including one dedicated to donated items. The first room displays relics that provide a glimpse into prehistoric and ancient cultures of Buyeo. The second room introduces you to the living culture of Baekje. Baekje Gilt-Bronze Incense Burner is exhibited there. The national treasure was miraculously dug out of ground in 1993 and brought Baekje back into the limelight. The body that resembles the lotus flower and phoenix seated atop are truly spectacular. With Buddha statue and bricks in the third room, you will be able to appreciate such excellent and sophisticated craftsmanship from that period in time. When you complete the tour, you'll regret just how little of that glorious kingdom is still with us. 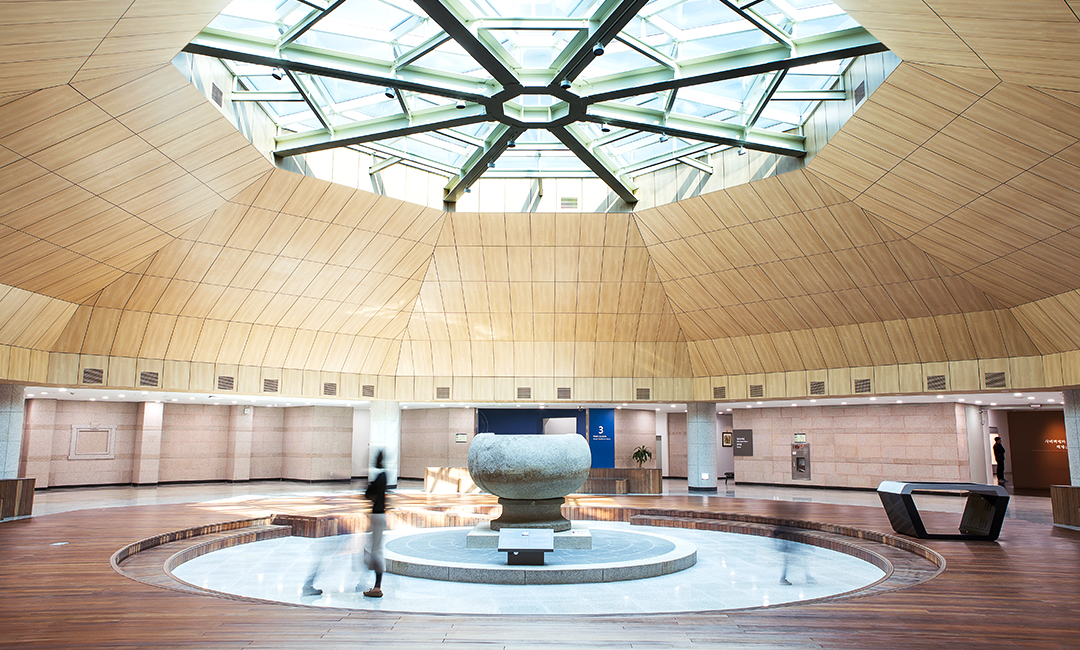 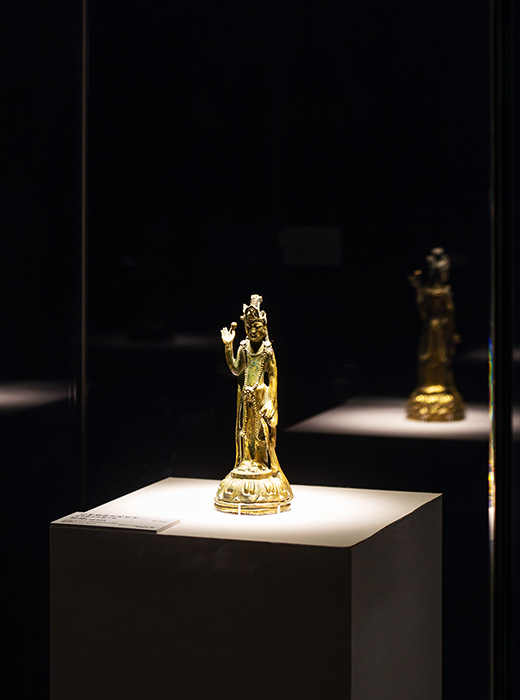 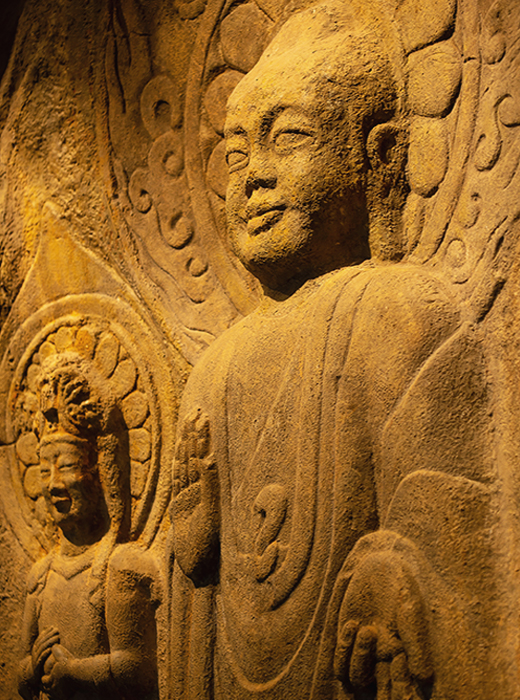 Travel Tip You absolutely have to see the pots in the room for donated items. Some of them were unearthed in Buyeo during Goreyo or Joseon periods. About 50 donors have given their relics to the museum. Looking at these gorgeous pots will bring back your disappointment over fading Baekje culture.
Address San 16-9, Dongnam-ri, Buyeo-eup, Buyeo-gun, South Chungcheong Province
[1 PM] Walking on Streets of Baekje at Baekje Cultural Land
Baekje Cultural Land was built in 2010 to promote the history and culture of Baekje, and it was the culmination of a 17-year project that lets you experience the culture, instead of simply seeing relics. The theme park has replicas of the royal palace Sabiseong, the main building of Neungsan-ri Temple and the five-story wooden pagoda. In addition, Wiryeseong, the royal palace during the early Baekje era, and different houses for different members of the social class have been recreated. The landmark inside is the five-story wooden pagoda from Neungsan-ri Temple site. Several master craftsman with intangible cultural property designations took part in the rebuilding process. They produced a structure that encapsulates the outstanding techniques of the Baejke period. Inside the recreated Sabiseong, you can try on formal wear of Baekje and shoot arrows. The nearby Baekje Historical Museum will help you develop a better understanding of Baekje's culture and history. There are all sorts of exhibits for kids to see and touch. Buildings were replicated in actual size, so walking amongst them will make you want to travel some 1,400 years back in time. When the urge hits, just enjoy yourself and feel Baekje. This is as Buyeo as it gets. 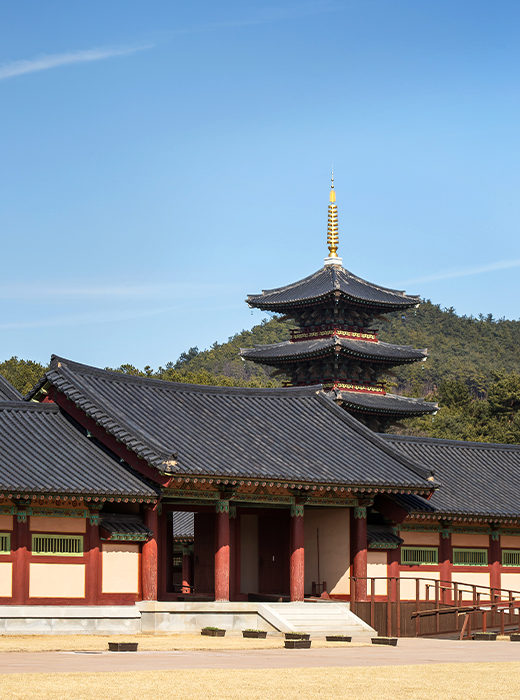 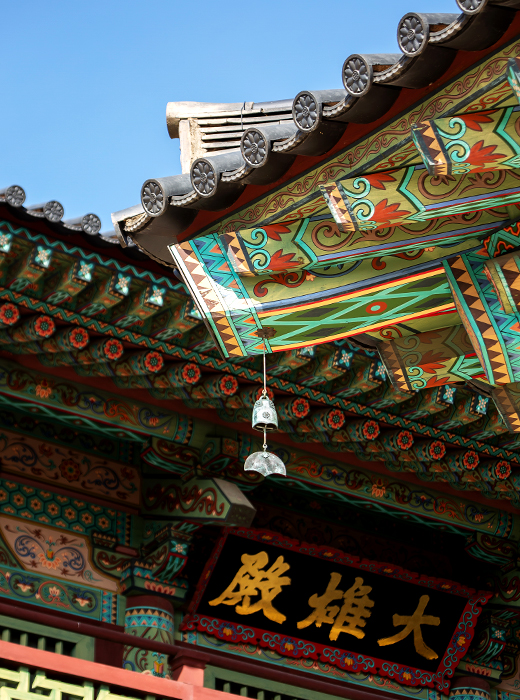 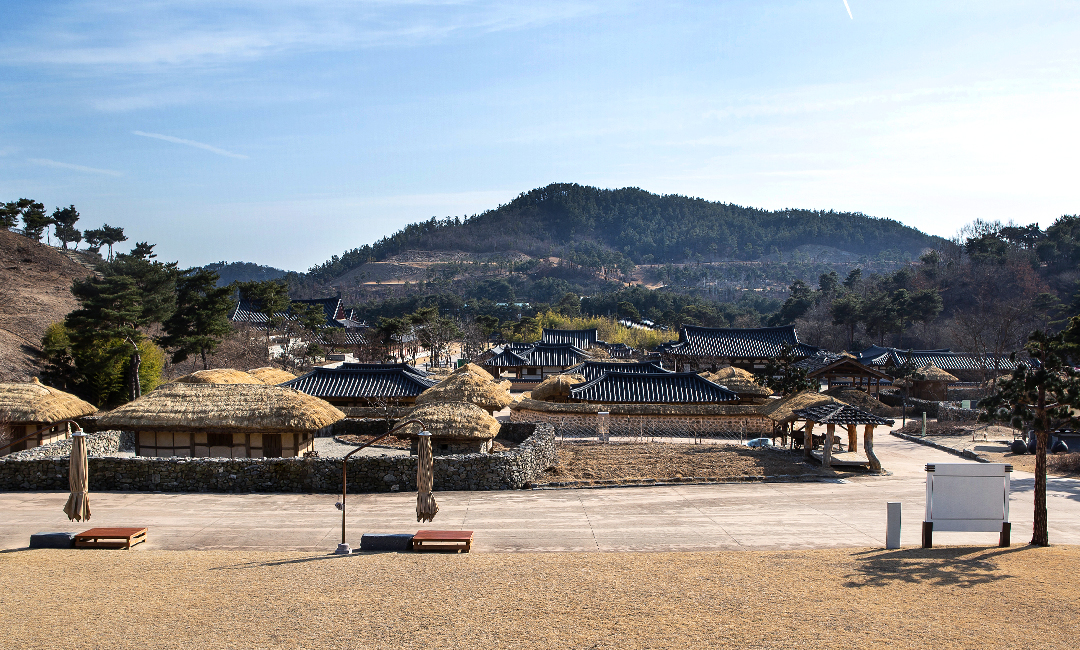 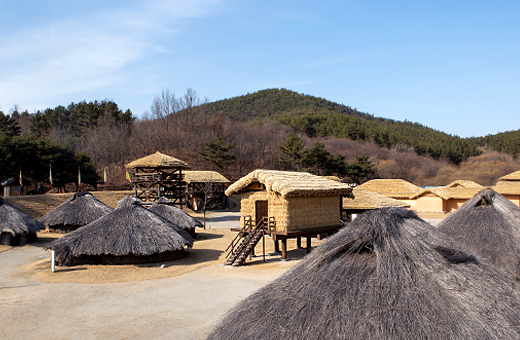 Wiryeseong in the early Baekje period 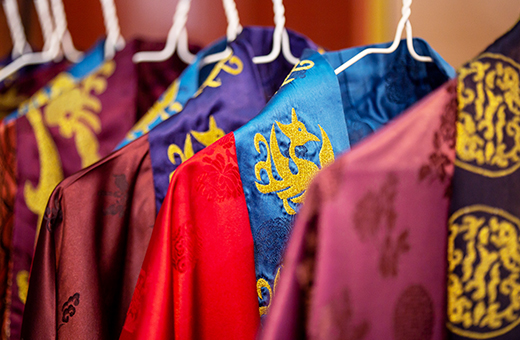