Seoul Botanic Park, a Colossal Playground of Water and Plants
Seoul Botanic Park has opened its doors. Spanning 504,000 square meters in total, the Park is the size of 70 soccer fields. Its greenhouse is the largest in Korea.
“Are tropical regions this hot?” asked a child. “That is a bizarre-looking tree trunk,” a man behind also said. Inside the Tropical Hall of the greenhouse at the Plant Culture Center, visitors were voicing their impressions as they watched in awe unfamiliar plants from the tropics. At 2 o’clock in the afternoon of a weekday in February, the greenhouse was packed with people. The skywalk cutting across the ceiling of the hall was like a blocked artery from time to time. Seoul Botanic Park, situated in Magok, western Seoul, was made available to the public on Oct. 11, 2018 after three years of construction. Although it was not its official opening, over 600,000 people visited the Park in the first month alone. The total number of visitors stands at 2.1 million as of now (Mar. 24, 2019). Seoul Botanic Park is definitely receiving the warmest welcome from the citizens in its beginning months. 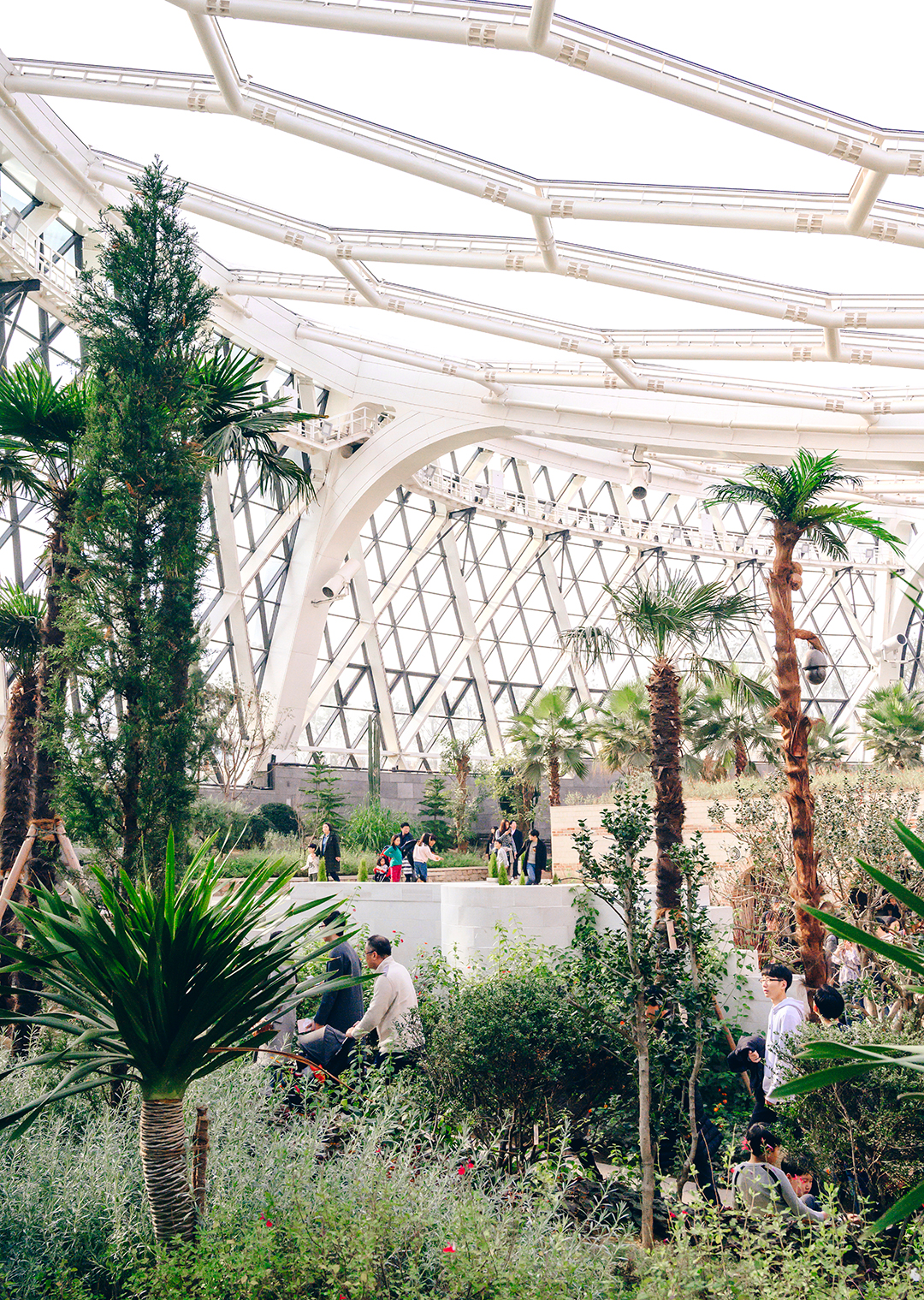 Mediterranean Hall inside the greenhouse

Botanic Garden Within Lake Park
Seoul Botanic Park unfolds the moment you walk out of Exit No. 3 at Magongnaru Station. The Magok district in Gangseo-gu was originally intended to house the “waterfront,” a project to build a waterway linking to the Han River as part of the 2007 Magok Urban Development Business. However, changes to the city’s development plan has led the district to become what it is today. The Park combines park facilities offering space for leisure and relaxation and a botanic garden serving as an educational facility to research plant preservation, and is comprised of four areas–Open Forest, Themed Garden, Lake Garden, and Wetland. While the Themed Garden performs a traditional role of botanic garden, the other areas are designated as a park, open 24 hours to the public. That is why the name “Botanic Park” was used instead of the more familiar expression of “Botanic Garden” in the official English title of the place. Adjacent to the subway exit is the Open Forest where you can find the Visitor Center welcoming and offering information to visitors, the Grass Yard where picnics can be enjoyed, and the Forest Culture Center assigned for gardening classes. Various festivals and exhibitions also take place in this section of the Park. 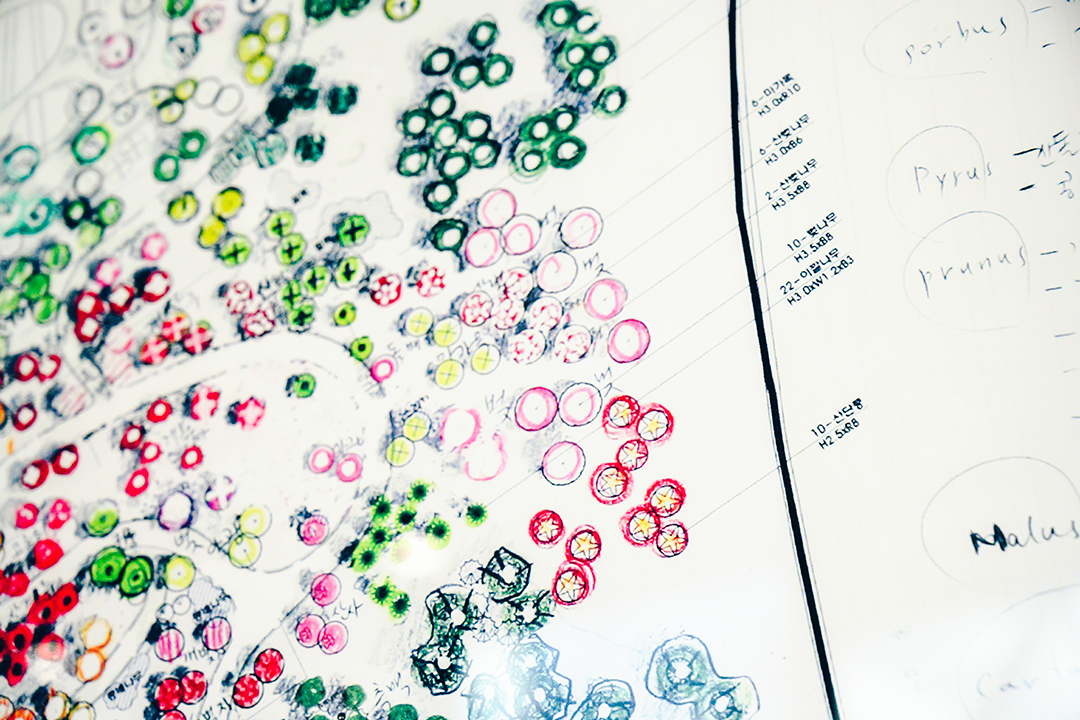 As can be guessed from the presence of the Lake Garden and Wetland, Seoul Botanic Park carries a theme of water and plants. The vast area of Magok now houses a lake, wetland, parks and a botanic garden. Having been farmland for a long time, the Magok district had been a flat land without hills. The once boring lot has seen changes in its landscape with the creation of a man-made lake and ridges. The Lake Garden, including the lake and surrounding walkways and decks, makes the Park more diverse and eco-rich. The Wetland is located at the junction of the Park and the Han River. Living organisms in the marsh are all preserved for educational purposes, and the road has been repaved to accommodate bikers coming from the direction of Hangang Underpass. (The Wetland will open to the public at the official inauguration of the Park slated for May 2019.) 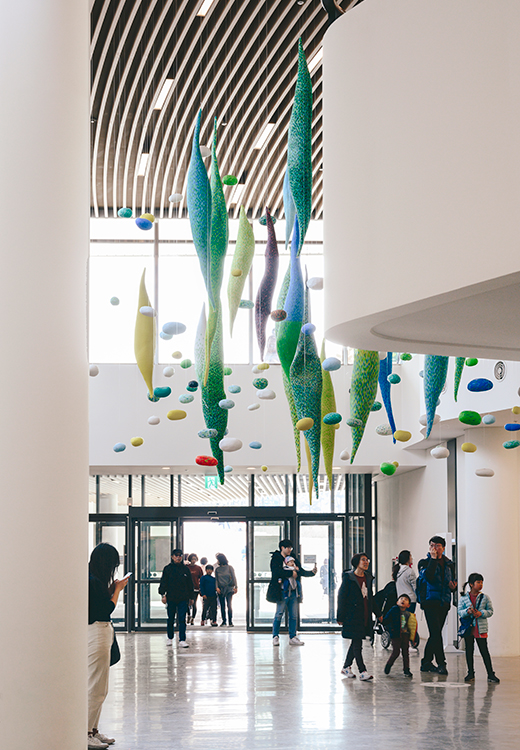 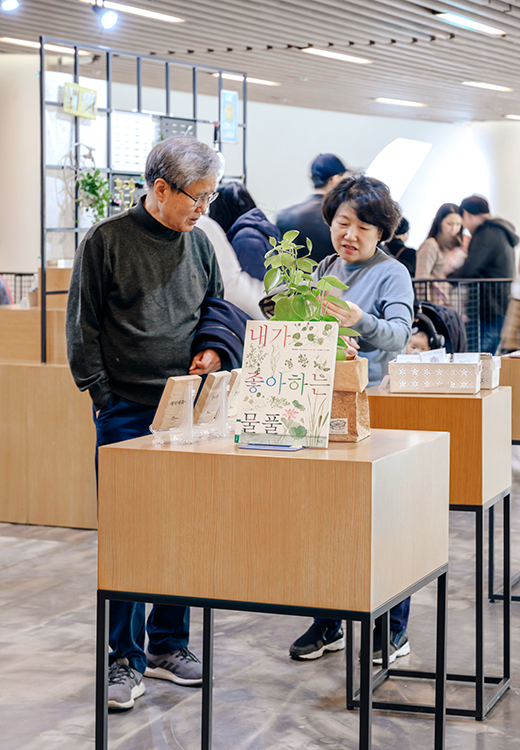 Gift shop on the second floor at Plant Culture Center

Exotic Greenhouse and Korean-Style Garden
The greenhouse within the Plant Culture Center in the Themed Garden is the landmark of Seoul Botanic Park. Measuring 100 meters in diameter and 25 meters in height, the greenhouse is as high as an 8-storey apartment building and is home to exotic plants from 12 cities in tropical and Mediterranean regions. The Park’s greenhouse stands out in appearance. While it is easy to think of a dome-shaped building for a greenhouse, the greenhouse at Seoul Botanic Park looks like a hollow bowl. In a dome-style greenhouse, visitors look to the center of the structure where tall trees are planted as they go around. In the greenhouse at the Park, on the contrary, tall trees are planted around the edge, directing people’s eyes toward the outside. Such a difference in viewpoint as a result of the unique appearance of the greenhouse enables visitors to appreciate not just the plants inside the structure but the outside scenery through the glass walls. Of course there are drawbacks caused by this architectural choice. The hollow center means not enough light for the plants. However, this structural shortcoming could be improved by the use of a special building material. The greenhouse ceiling, which adopted hexagonal plant cell patterns, is covered with a new material called ETFE which provides greater light penetration than the regular glass. This adaptation adds another interesting element to the composition of the greenhouse. 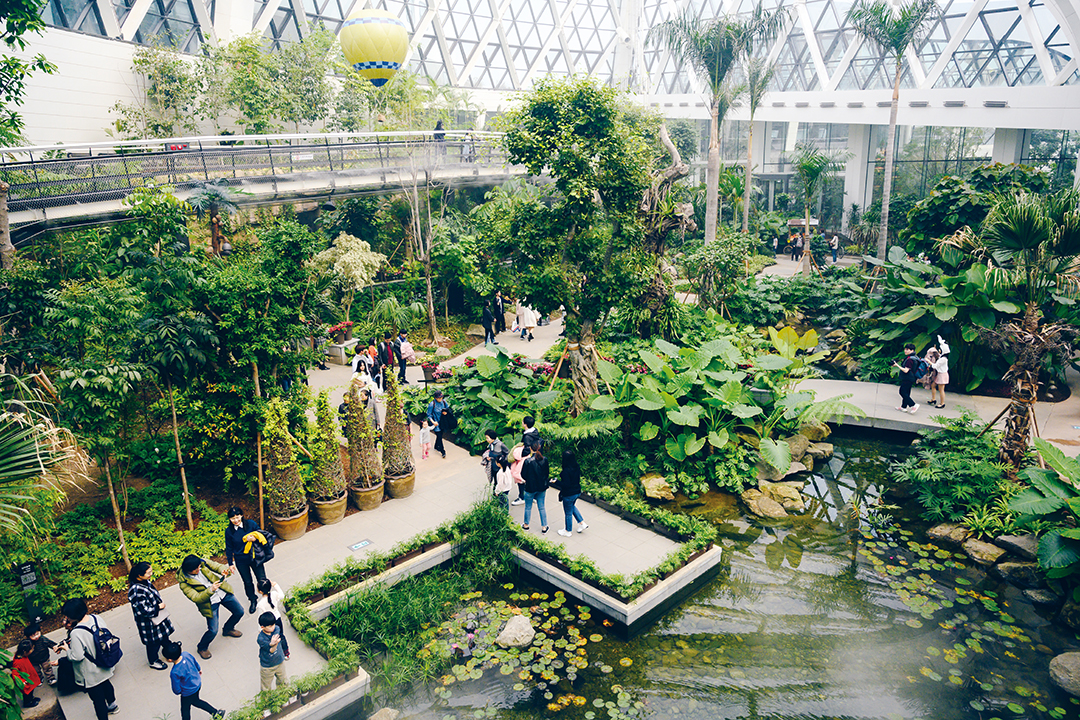 Tropical Hall seen from above the Skywalk 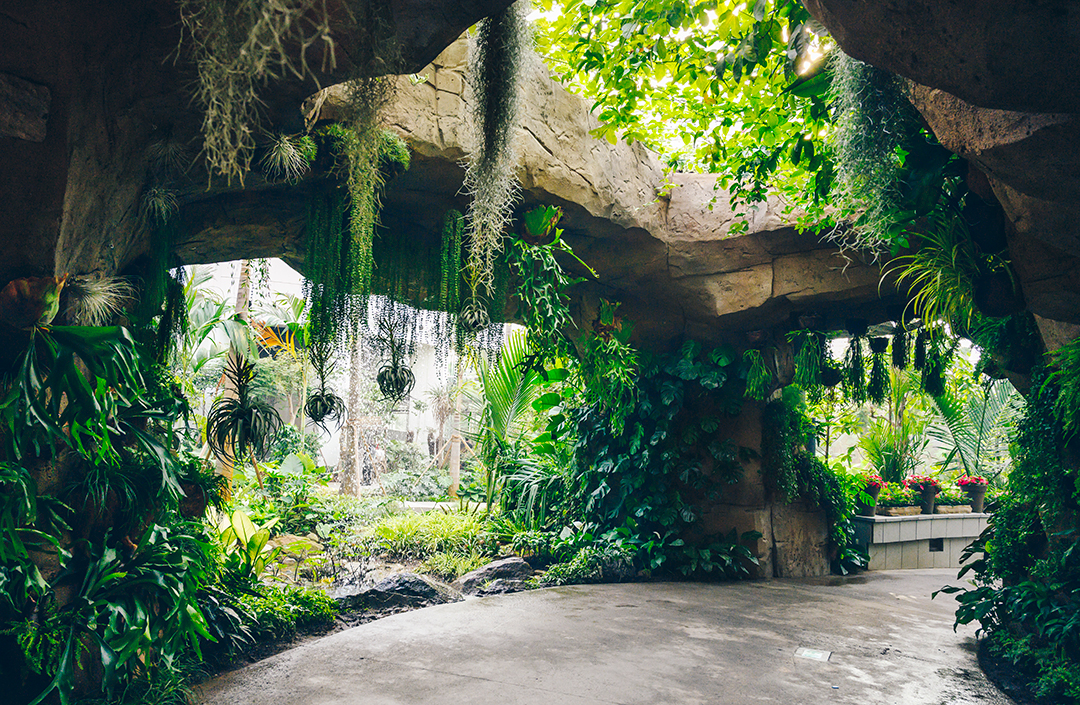 The cave covered in plants at the entrance of Tropical Hall

The greenhouse is largely divided into the Tropical Hall and the Mediterranean Hall. The most commonly used route for viewing is to enter the Tropical Hall on B1 level, check out both halls, and take the skywalk on the upper deck to come out to the ground level. What greets you first as soon as you enter the Tropical Hall is a large banyan tree. Banyan tree, known for its unique appearance, has branches that grow towards the ground, turning into aerial prop roots. Multiple prop roots and branches result in a deceptive appearance of the tree, making essentially one tree look like quite a few. In the tropics, a single banyan tree can grow to the size of a forest, expanding laterally with no limit. Behind the banyan at the entrance stands a sacred fig that symbolizes the Buddha. It is the largest one in Korea. Moving onto the Mediterranean Hall, you will see a variety of cacti. The Fountain Square designed in Italian style also contributes to the exotic ambience of the hall, creating a perfect photo spot where people vie for a chance to take a picture. Toward the end of the Mediterranean Hall stands a baobab tree from Australia. Famous for its appearance in The Little Prince written by Saint-Exupéry, the baobab tree is popular among children. After finishing touring both halls, take the elevator in the center to go up to the upper deck for a skywalk experience. Designed to allow visitors to feel like they are actually walking in a tropical jungle, it will present you with a completely different sensation looking down at the trees from above, from when you were watching them on the same level. 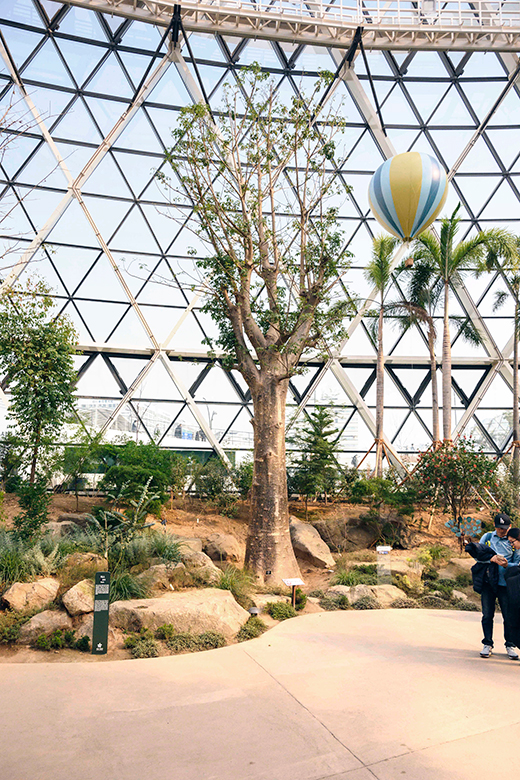 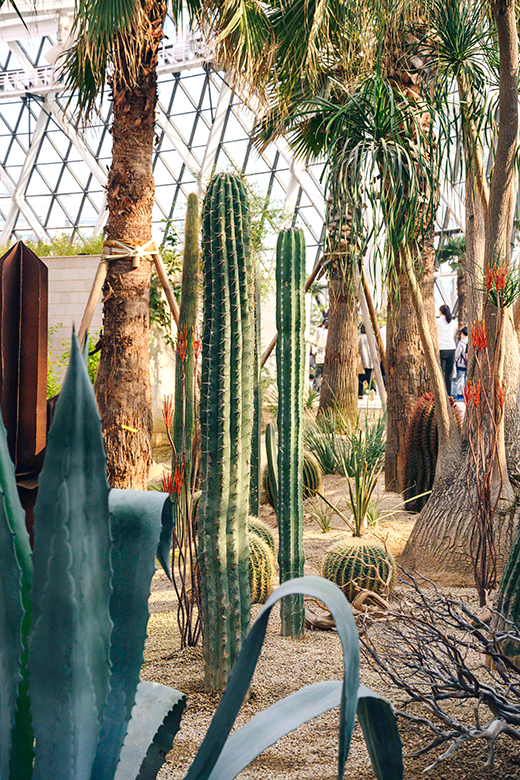 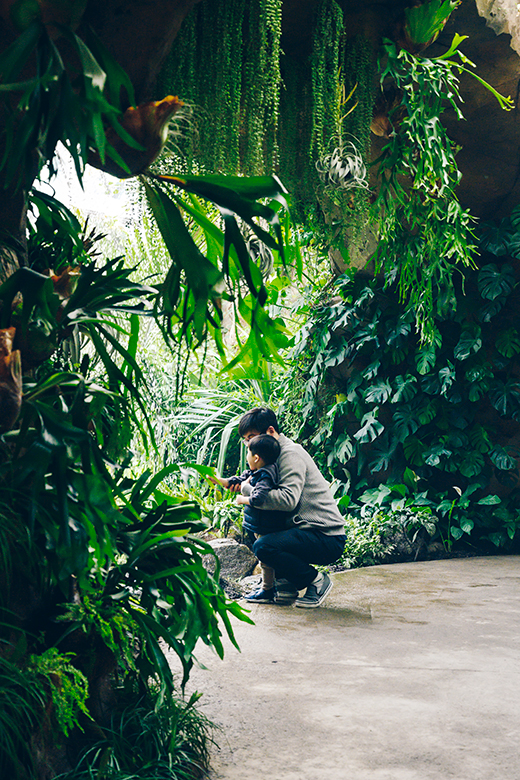 Child and parents at Tropical Hall 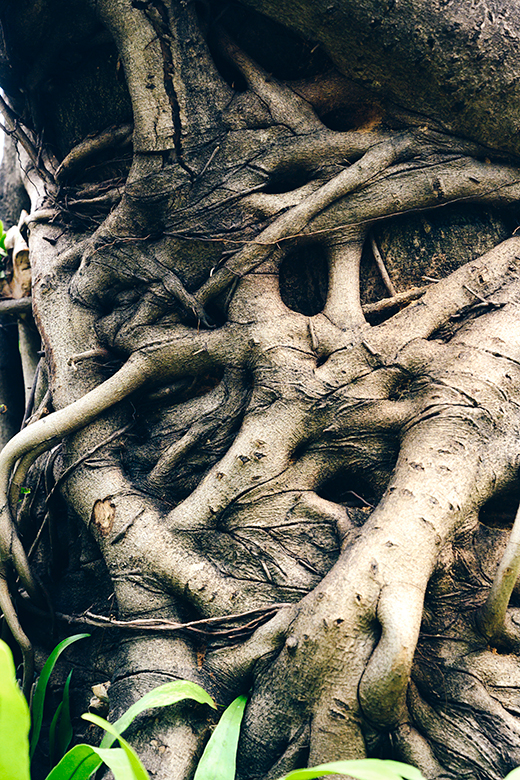 The botanic garden is not just filled with foreign plants. The Themed Garden in front of the greenhouse features Korea’s indigenous plants and gardening culture using eight themes. It shows the reconstruction of a traditional Korean garden filled with native plants. For example, the Garden of Meditation visualizes the concept of “borrowed scenery,” which is one of the unique features of a traditional Korean garden, using a gazebo. It is a rare chance to immerse in the simple yet eco-friendly aesthetics of the Korean garden.  Currently the Themed Garden is under preparation with new plants being brought in, to meet the official opening date, after which an entrance fee will be required along with the greenhouse. 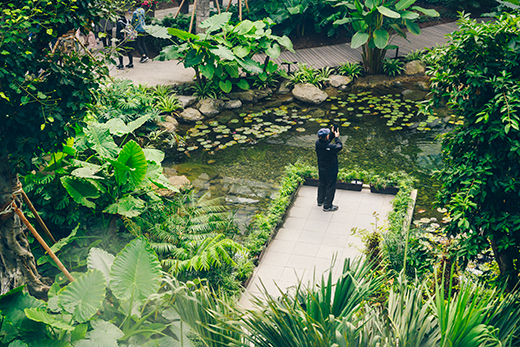 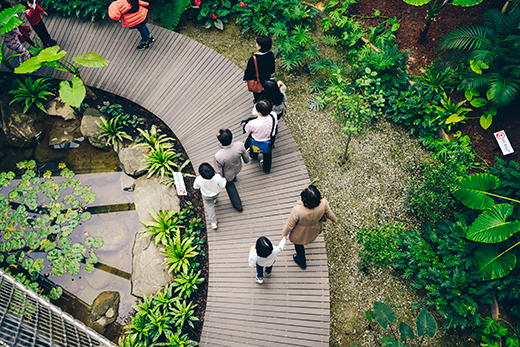 Future to Look Forward to With Children
Another outstanding feature in Seoul Botanic Park is the Seed Library located on the first floor of the Plant Culture Center. The Park pays attention to its role as an education and research facility to help children feel close to nature and understand the importance of ecosystem diversity. The Seed Library is one of the facilities serving that purpose. The library is like an ordinary library, except that instead of books, it lends seeds. Visitors can take the seeds home to plant themselves. What is more exceptional is the fact that the seeds are all indigenous to Korea. You can return the seeds by submitting a photo of your growing plants, which will give you permission to borrow more seeds next time. The Seed Library is the second most popular space in the Park, after the greenhouse, where people enjoy visiting and learning about Korea’s own plants. Seeing children reading illustrated guides to flora in the Plant Library, also in the Plant Culture Center, or enjoying listening to the stories about climate zones and plants at the Exhibition Hall, you can’t help but look forward to what future holds for Seoul Botanic Park. 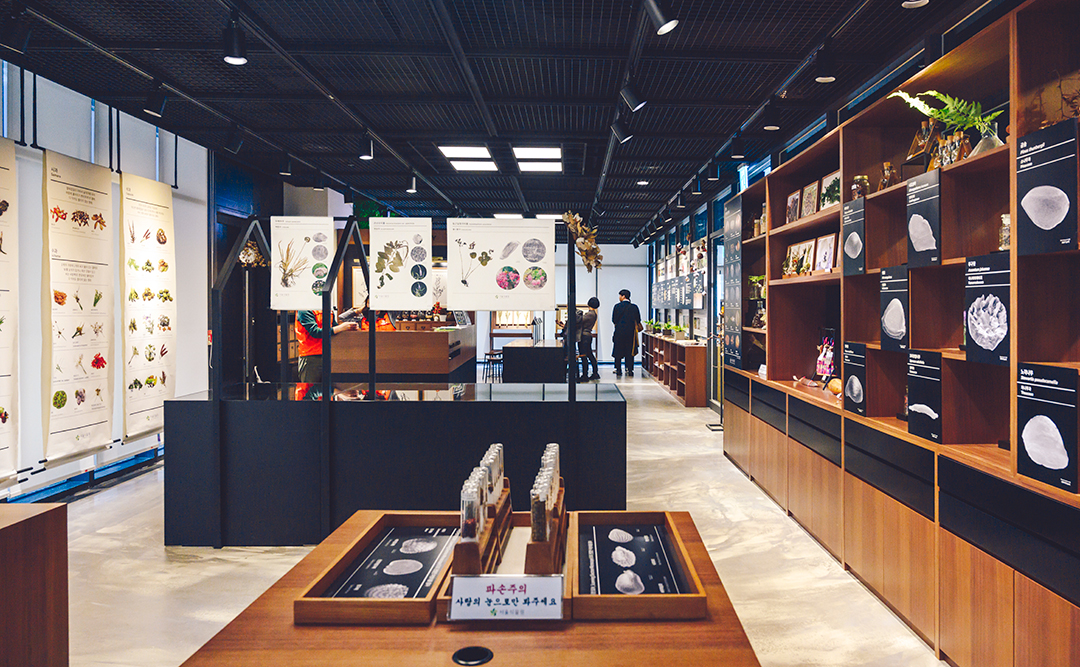 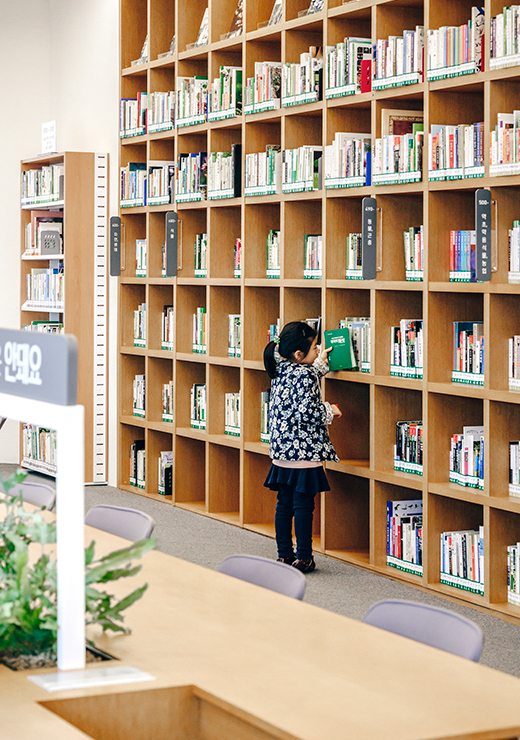 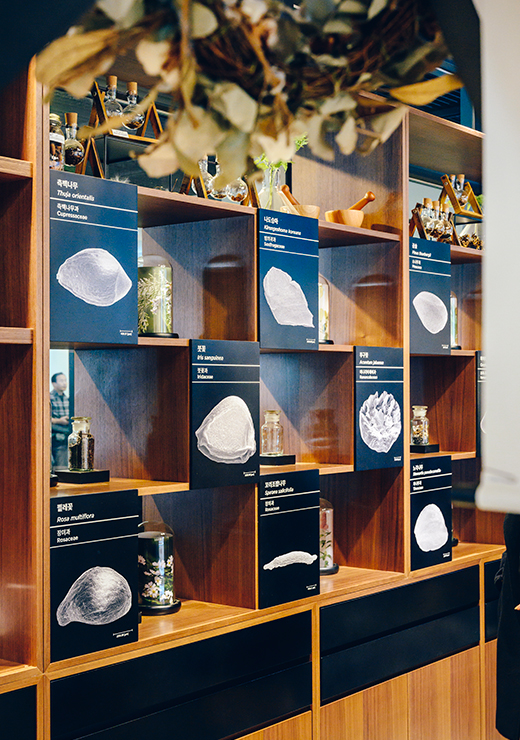 Many people have visited Seoul Botanic Park before its official inauguration. You may think one visit is enough for experience. Keep in mind though, that it hasn’t revealed its entirety. There will also be seasonal changes to the landscape. Cherry blossom trees filling the Open Forest in spring, willows in the Lake Garden in summer, and color-changing maple trees and cosmos lining the perimeter of the lake in autumn will attest to it. Seoul Botanic Park is connected to Magongnaru Station of the AREX Line, making it a great destination for travelers using Gimpo International Airport or Incheon International Airport or for those who are only staying for a stopover in Korea. The greenhouse accepts visitors as late as 5pm and stays open till 6pm. If you want to avoid the crowd for a more peaceful and quiet tour, it’s better to schedule your visit around the final entrance time. By the time you are done at the greenhouse, a great parting gift from the Park will be awaiting–a sunset over the lake. 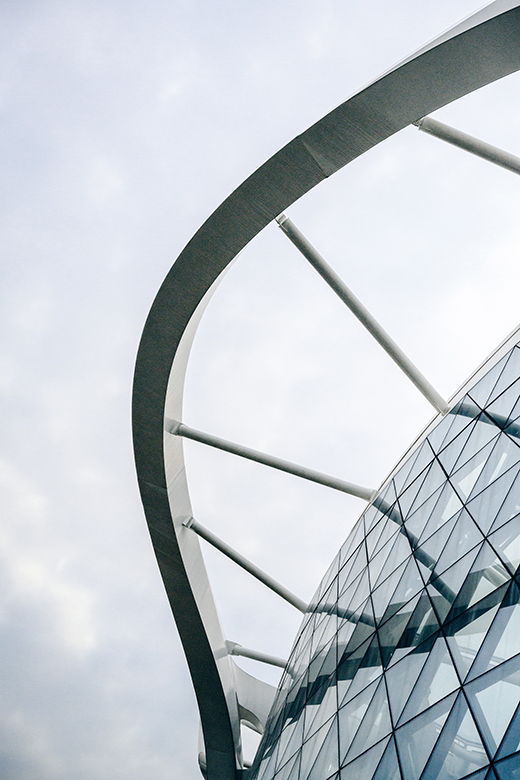 Greenhouse in shape of pistil and stamen of a flower 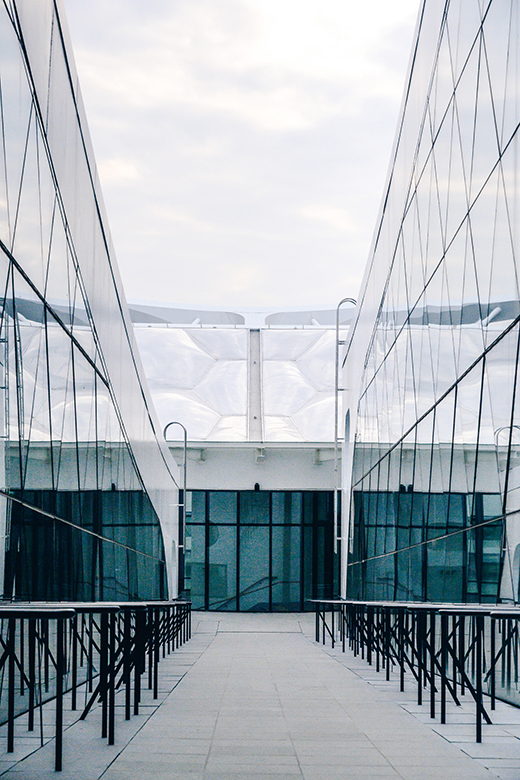 The passage between Tropical Hall and Mediterranean Hall makes for a pretty trail. 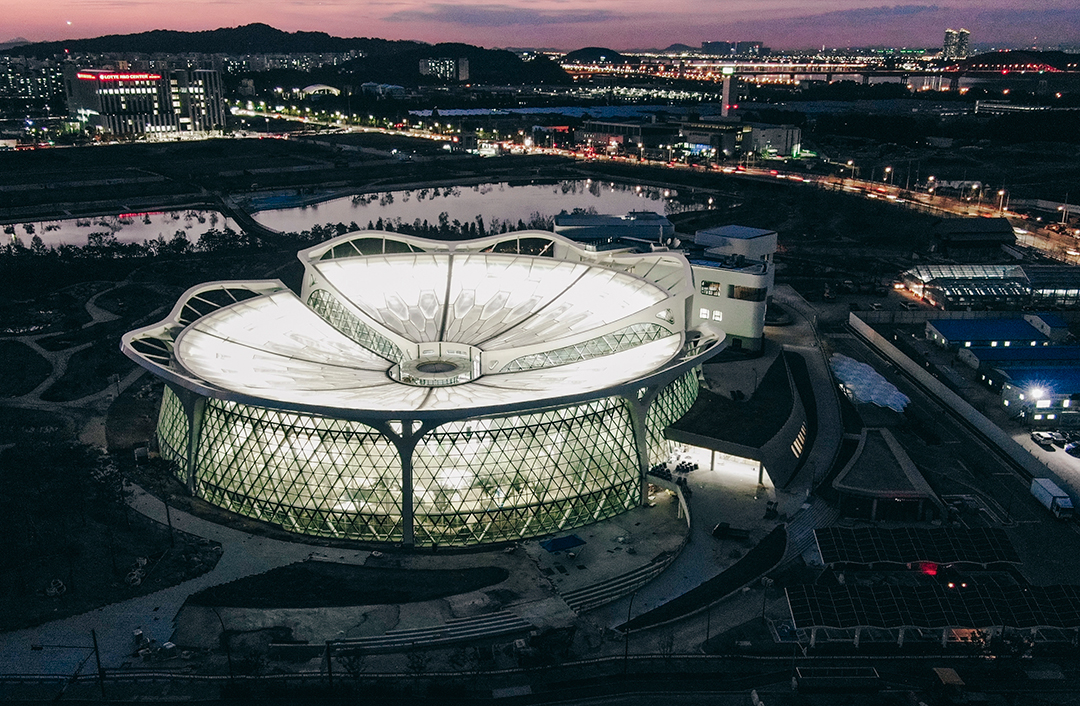