[DAYTRIP] Modern Heritage in Busan
Buildings help complete the landscape of the city they occupy. By exploring old buildings that have remained in place in Busan, we developed a new appreciation of the city's landscape and also the modern history of Korea.
Depending on the purpose of your trip, your destination will show you its many different sides. Busan makes for a fine destination for epicures in search of new delicacies and cinephiles alike. The objective of our trip to Busan this time was to explore modern architecture. Busan had Japanese dwellings beginning in the late-Joseon's King Sukjong era, and has long been a hub for diplomatic activities and trades. This gave birth to the modern city of Busan, and buildings that remain standing to this day give us a glimpse into the modern history of the country. It's fascinating to see how the city has evolved over time by exploring buildings erected between 1920s and 1960s, covering the Japanese colonial period and the Korean War. In this bustling metropolis, buildings that have retained their original look are quite charming.
[9 AM] Visiting UN Memorial Cemetery in Korea: Scars of War and Great Modern Architect
If you're into architecture, you'll enjoy the UN Memorial Cemetery in Korea (UNMCK) the moment you arrive there. The main entrance and the memorial hall are the work of the great first-generation architect, Kim Joong-up. After cutting his teeth at Le Corbusier's atelier in Paris, Kim returned home in 1956, later earning recognition for starting the 'Korean modernism' in such difficult, post-war circumstances. The entrance and the memorial service hall, designed in 1964, demonstrate Kim's signature formativeness. The memorial service hall's exterior is really something to behold, in particular its six exposed crossbeams and geometric, triangle-shaped roof. This is one of Busan's major landmarks, at the cutting edge of modern architecture at the time of its opening. Other facilities also fit in nicely with their surrounding landscape. 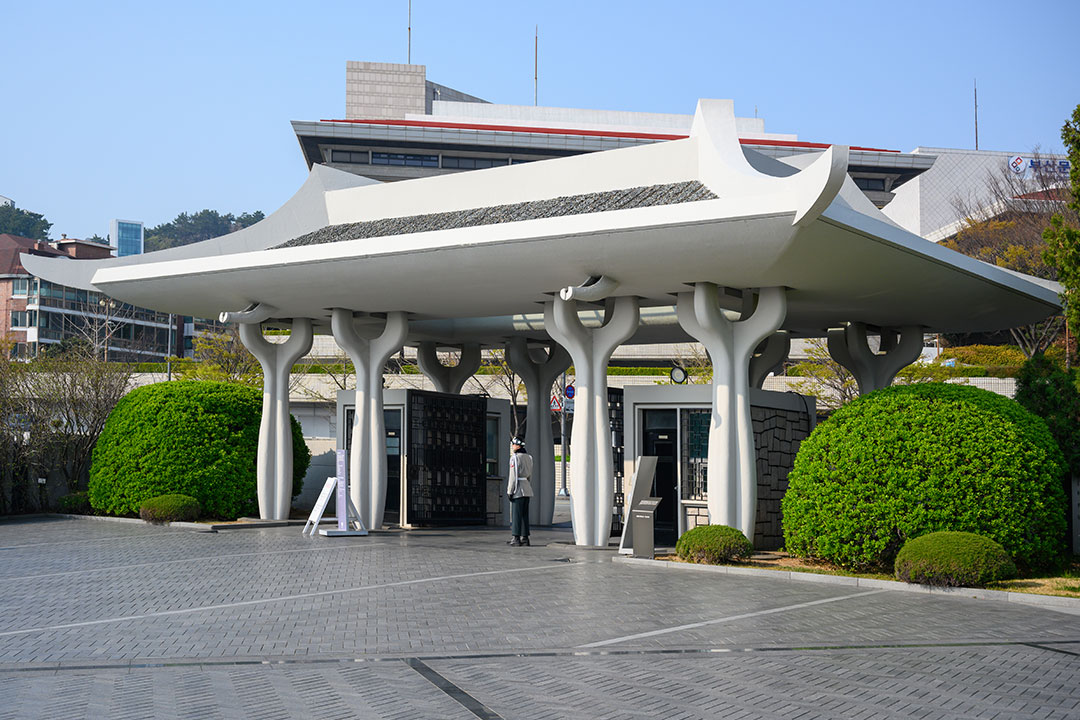 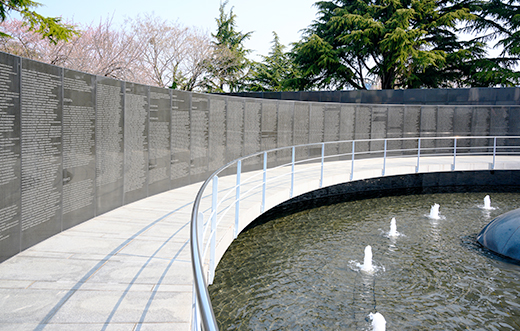 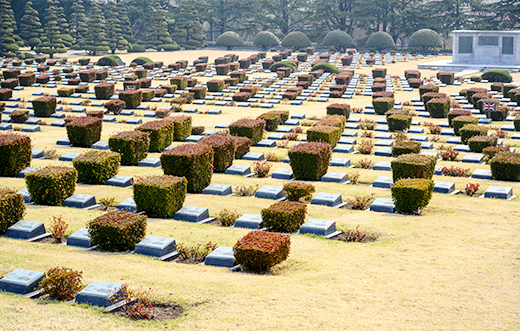 Cemetery parks can often evolve into a unique symbol of the city, and the UNMCK certainly fits the bill. At 9 a.m., it's as peaceful as it gets. There are more local residents out for a morning stroll or gardeners at work than tourists. Cherry blossom trees are in full bloom. Thanks to globe juniper trees and camellia, the place even seems like a well-groomed park. Even if you didn't know anything behind the history of the cemetery, you'll still fall in love with the sheer beauty of the place. Remains of the soldiers of UN members who fought in the Korean War are buried at UNMCK. In 1951, a year after the war broke out, the UN Command set up a cemetery for fallen UN troops in Busan, the southernmost tip of Korea. Remains of 2,297 soldiers from 11 countries, including 36 Korean soldiers, have been laid to rest here. Trees and plants surrounding the cemetery will bring you a peace of mind, though reading names engraved on black tombstones will serve as a solemn reminder of the war. There was a price to pay for the peace. 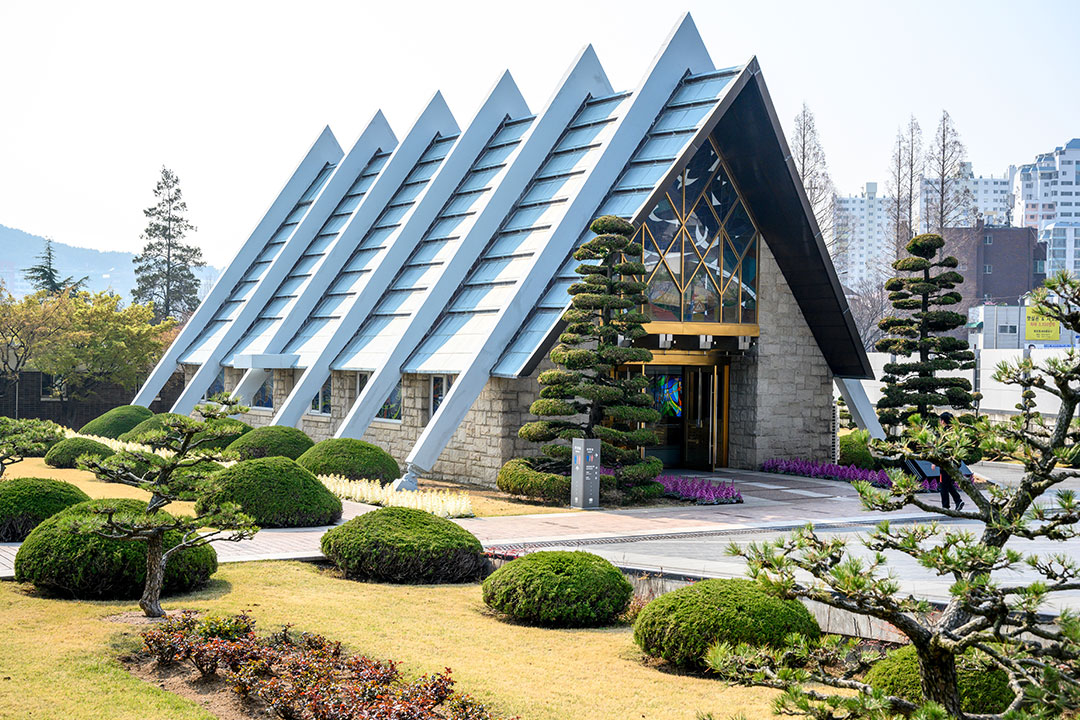 Address 800 Daeyeon-dong, Nam-gu, Busan
Phone +82-51-625-0625
Hours 9:30~18:00 (May~September), 9:00~17:00(October~April)
[11 AM] Drinking Tea at 'Munhwa Gonggam Sujeong,' Former Mansion for Millionaire
What was once a mansion for a Japanese entrepreneur is now a teahouse. Walk through the main gate and past the small garden, and a pretty, two-story wooden house comes into the view. Inside, you'll see the framing of the house built in 1943. 'Munhwa Gonggam Sujeong' is a traditional teahouse, inside a Japanese-style mansion for a Japanese businessman who lived in this city during the colonial era. 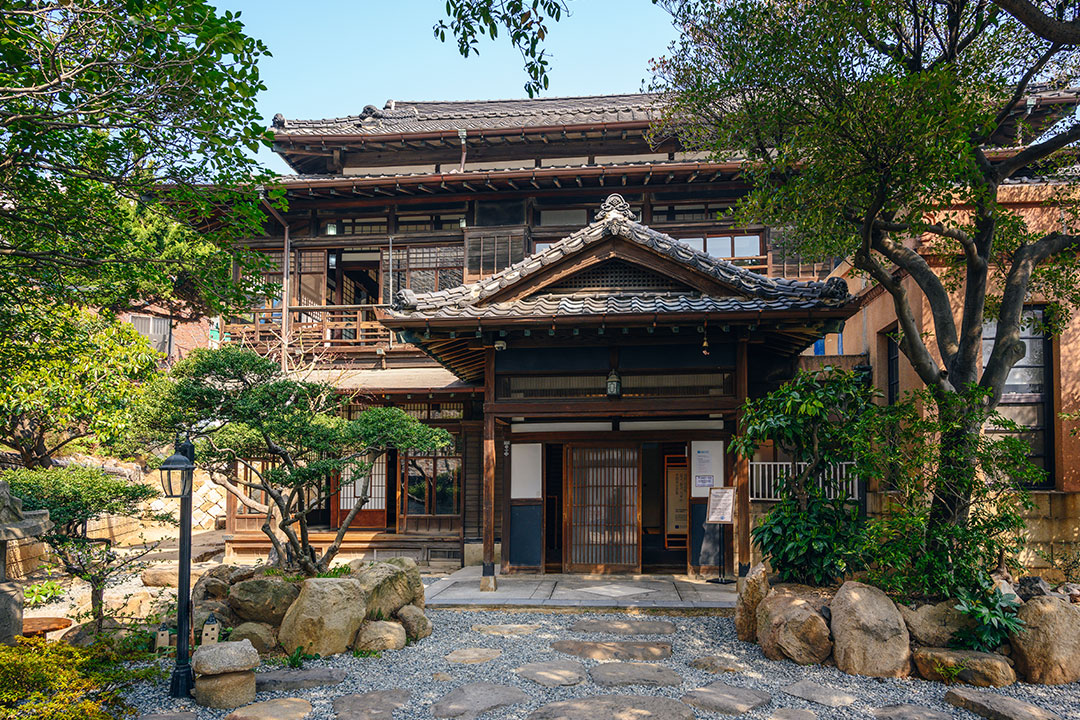 In the 1960s and 1970s following the liberation, it was a restaurant called 'Jeongrangak.' It was later registered as a cultural property, and the cafe named after its neighborhood, Sujeong-dong, opened in 2016. It's one of few remaining Japanese-style houses in Korea, with its original form well preserved, and it gives you an idea of what high-end mansions looked like during the colonial period. Akdong Musician and IU filmed music videos in this bucolic place. Among young couples out on dates, this cafe is a photo hotspot. You'll get the best natural light here from 10 a.m. to 11 a.m. It's the perfect time to sit back and enjoy some tea. 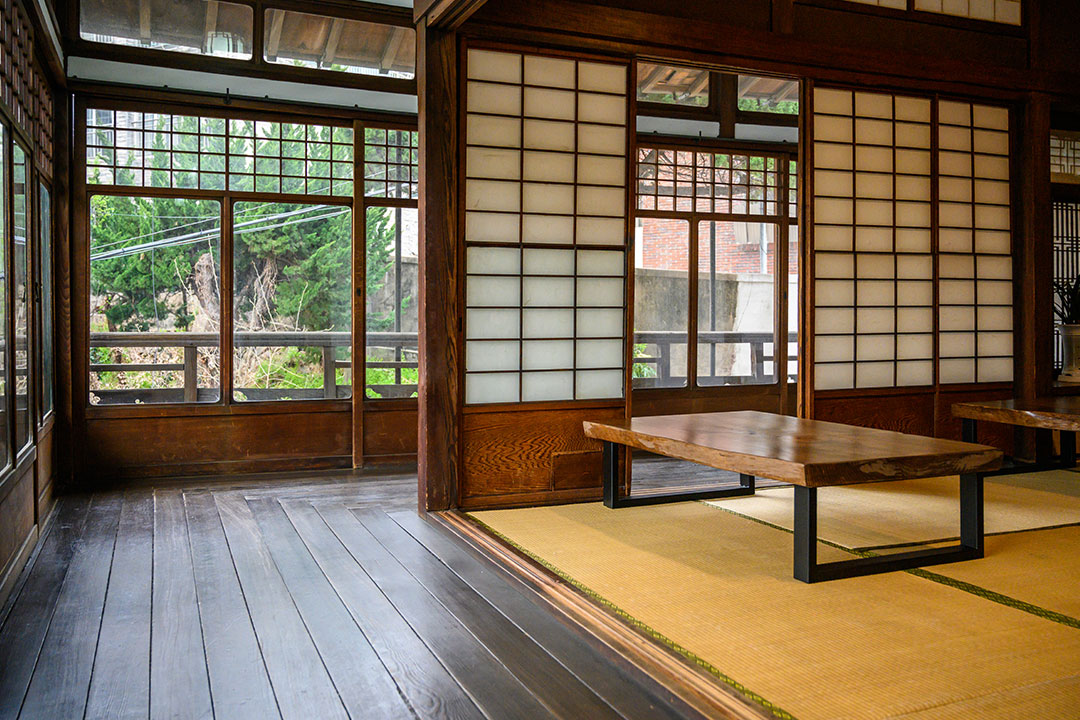 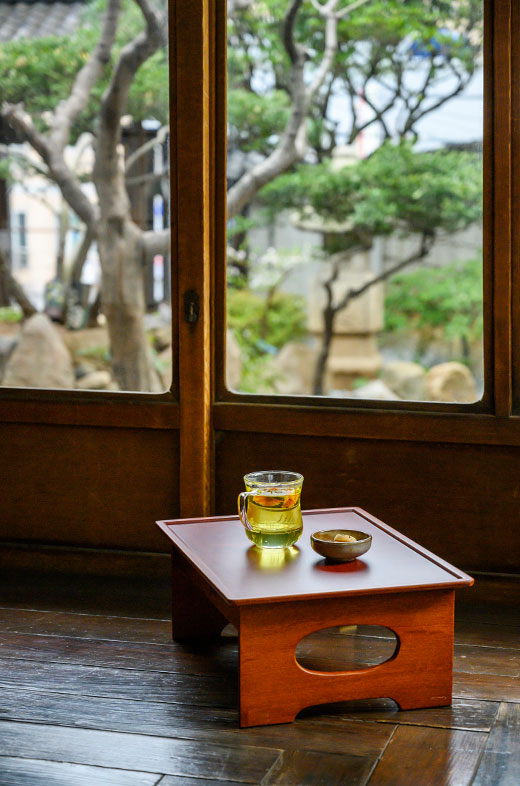 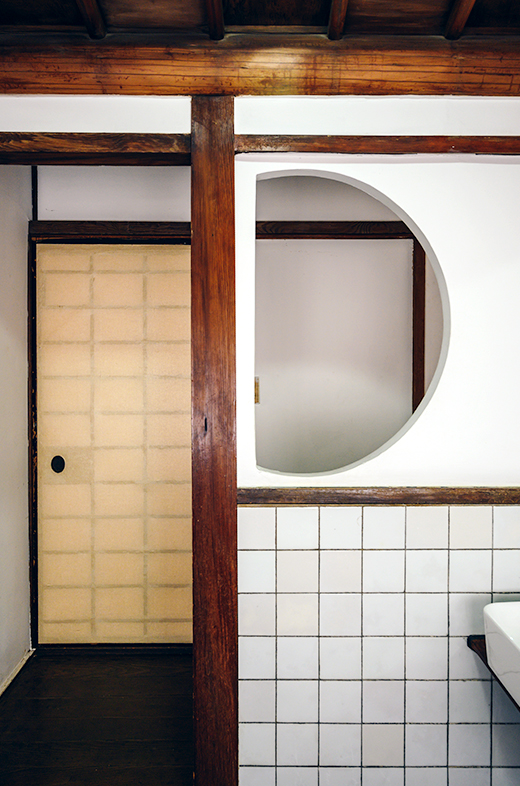 Address 75 Honggok-ro, Dong-gu, Busan
Phone +82-51-441-0004
Hours 9:00~18:00 (Closed on holidays)
[2 PM] Studying Busan's History at Busan Modern History Museum
Busan Modern History Museum is housed in a three-story, reinforced concrete building erected in 1929 as the Busan office for the Oriental Development Company. The sheer size of the building tells you just where the power resided at the time. The building has gone through so much over the years. During the Korean War, it served as the U.S. Embassy. Afterward, it was the Busan Culture Center of American Overseas Bureau of Public Information. Given the building's place in modern history, it's fitting that it's now a modern history museum. In 2002, Busan turned it into the museum that we see today, considering the building's historical value. The two exhibition halls introduce visitors to the history of Busan, starting with the opening of the port in 1876, and displays maps, photos, videos and booklets on Korea-U.S. alliance. The building stands in what used to be downtown, and there are replicas of those old streets at the museum. If you step outside after a visit, the city will look different. 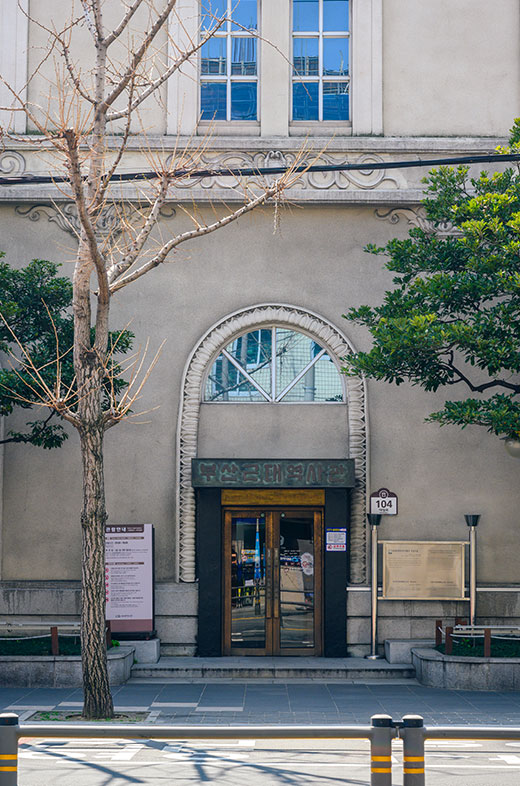 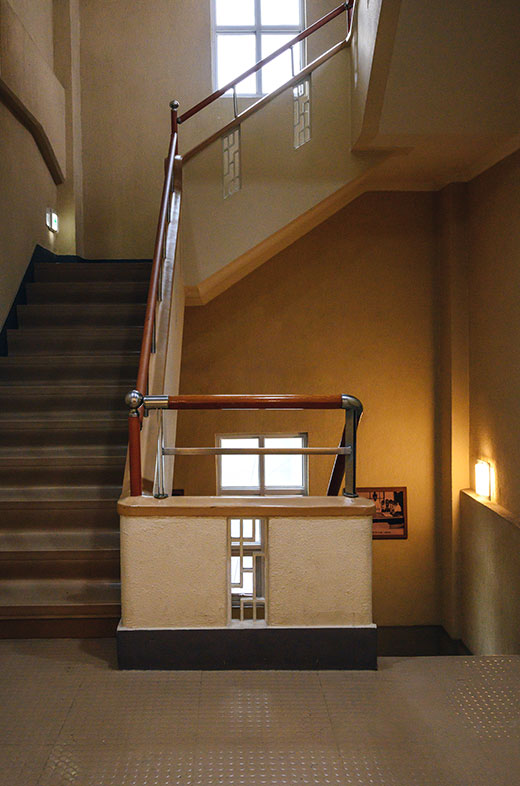 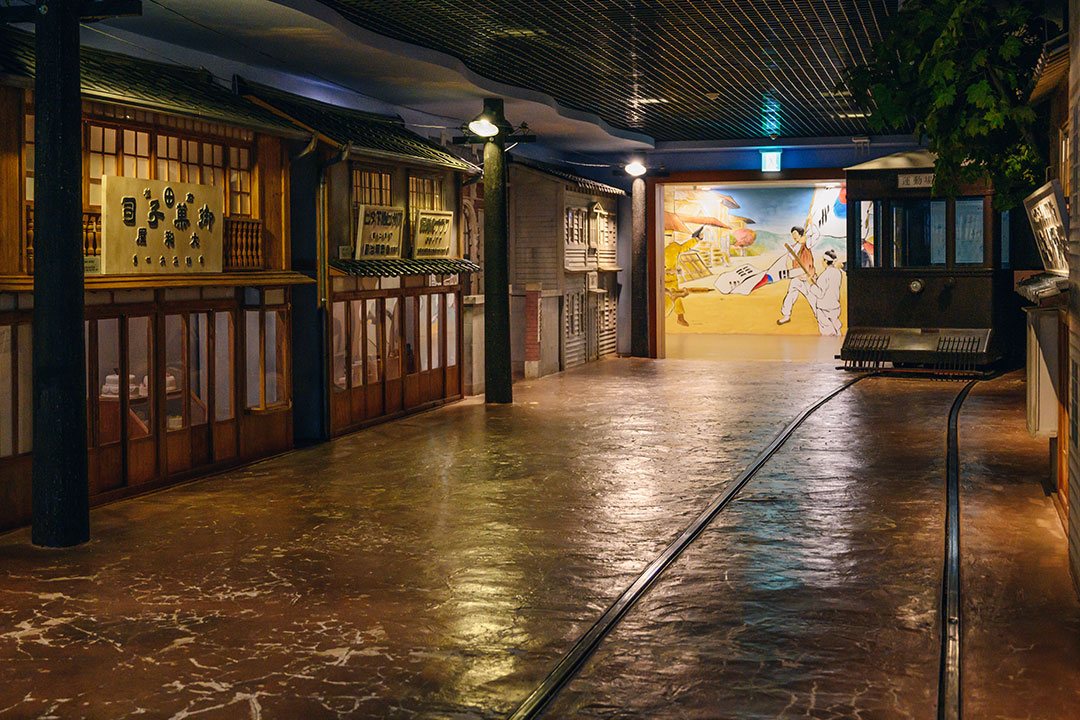 Address 104 Daecheong-ro, Jung-gu, Busan
Phone +82-51-253-3845
Hours 9:00~18:00 (Closed on Mondays)
[4 PM] Seeing Old Streetcar at Seokdang Museum of Dong-A University
Seokdang Museum is located at Dong-A University's Bumin Campus. The building was originally put up in 1925 as the provincial government building for South Gyeongsang and during the Korean War, it housed the temporary central government office. Dong-A University purchased the building in 2002 and turned it into the museum. One of the leading works of modern architecture, Seokdang Museum, with its bilateral symmetry, combines elements of Western and Japanese styles. In its early days, the building was best known for its beautiful exterior and its signature red bricks. On the third floor of the museum, you'll get to learn more about the architectural style and see tiles and bricks recovered during the renovation. 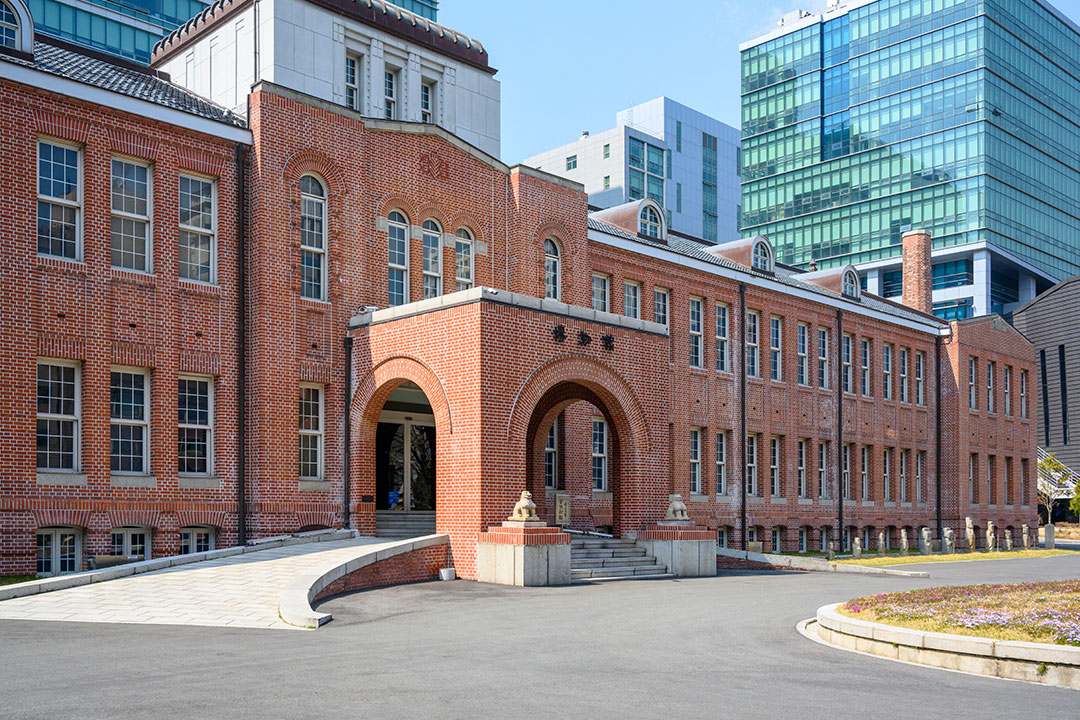 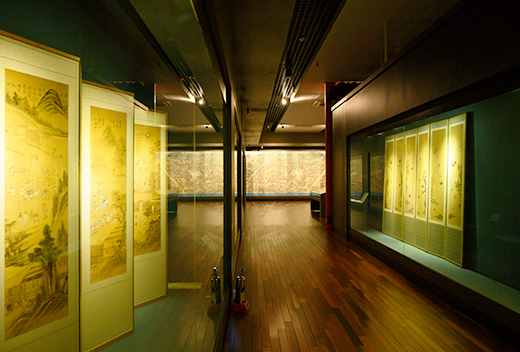 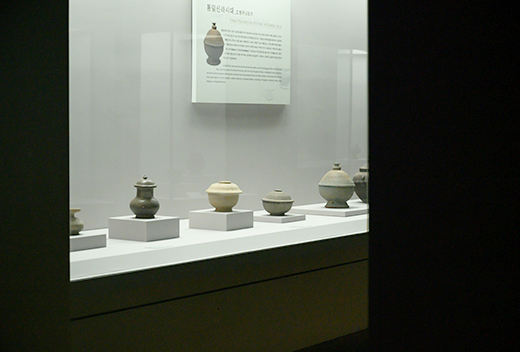 Seokdang Museum itself is historic, having opened in 1959 as the first museum in Busan. It holds two pieces of National Treasure and 14 other pieces of Treasure, including Donggwoldo, painting of Changdeok and Changgyeong Palaces. There are separate sections for archeological relics, ceramics and paintings and calligraphy, each with surprisingly rare collections. Outside, you'll see a replica of an old streetcar. Built in the U.S. in 1927, it roamed streets of Busan until 1968. 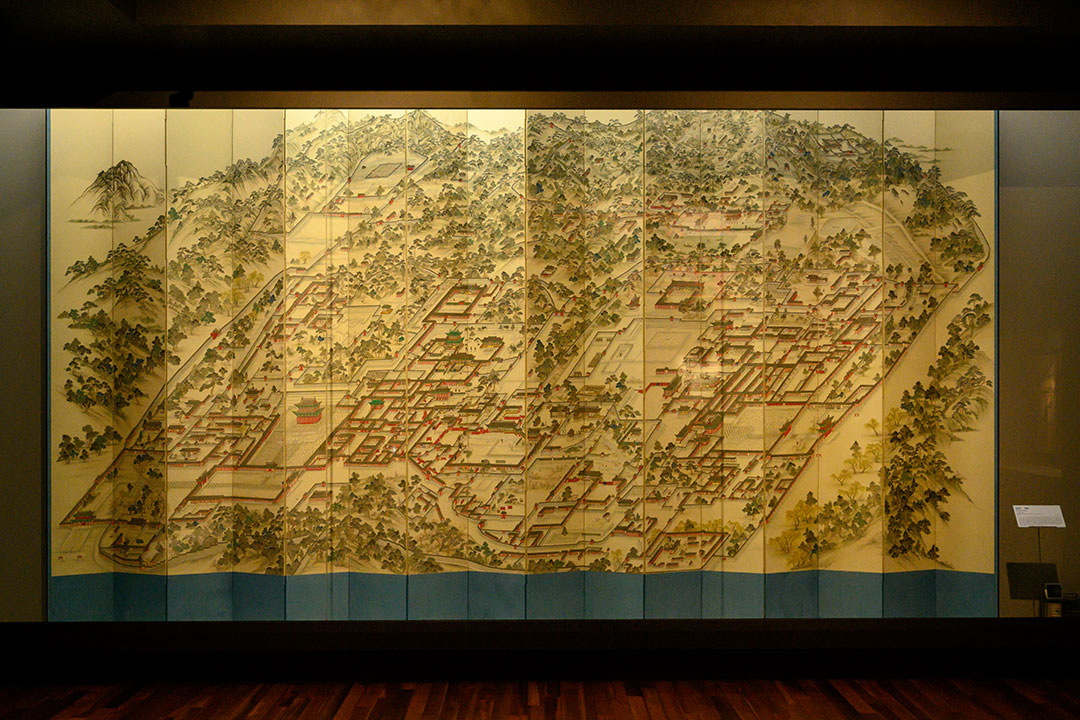 Address 225 Gudeok-ro, Seo-gu, Busan
Phone +82-51-200-8493
Hours 9:30~17:00 (Closed on Mondays)
[5 PM] Taking a Breather at Provisional Capital Memorial Hall
Busan was the provisional capital of Korea during the 1950-1953 Korean War. The president and the rest of the government moved south, and Busan naturally became the temporary capital. The building that housed South Gyeongsang Provincial Government (Seokdang Museum today) became the central government office, and the president took over the governor's residence, lying five minutes away. The Provisional Capital Memorial Hall opened in that former presidential residence, in commemoration of the Korean War and of Busan's serving as the capital during the war. The memorial hall is divided into the former presidential house and the exhibition hall. The presidential residence retains its original structure and feel. The exhibition hall sheds light on the lives of refugees and Busan locals during their provisional capital period. Tables, cupboards and cutlery in the living room, dining room and kitchen at the presidential residence aren't obviously from that period. But they still help create the comfort and warmth that only a home can provide. Even during the height of the war, homes must have remained sweet. Viewed from the front, this memorial hall seems like a house straight out of a fairy tale. It's thanks to that beautiful garden. Spring is the perfect time to visit, when the cherry trees in the garden are in bloom. 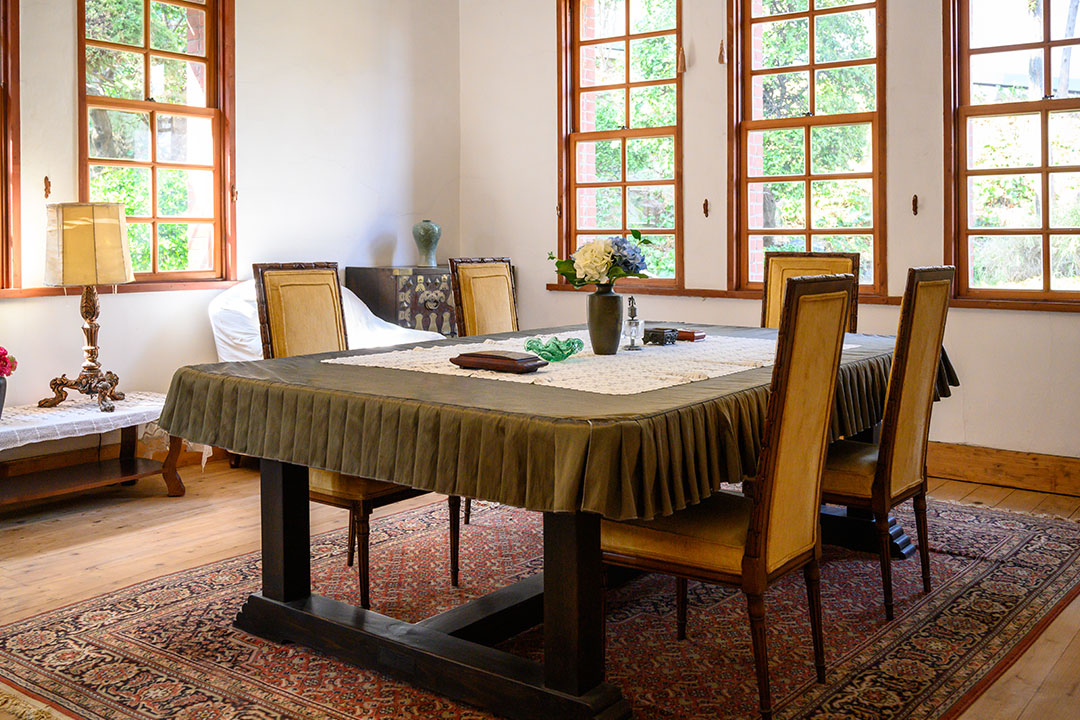 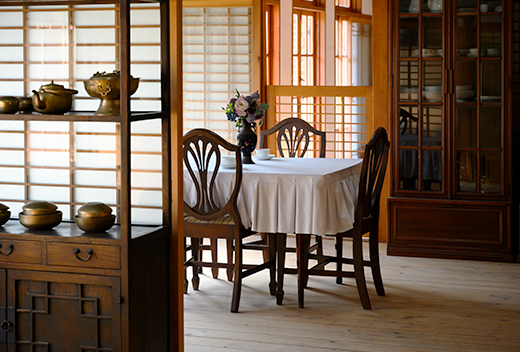 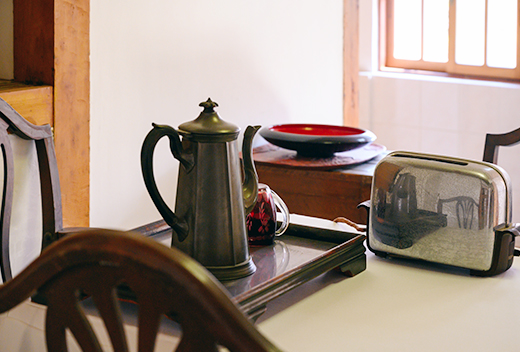 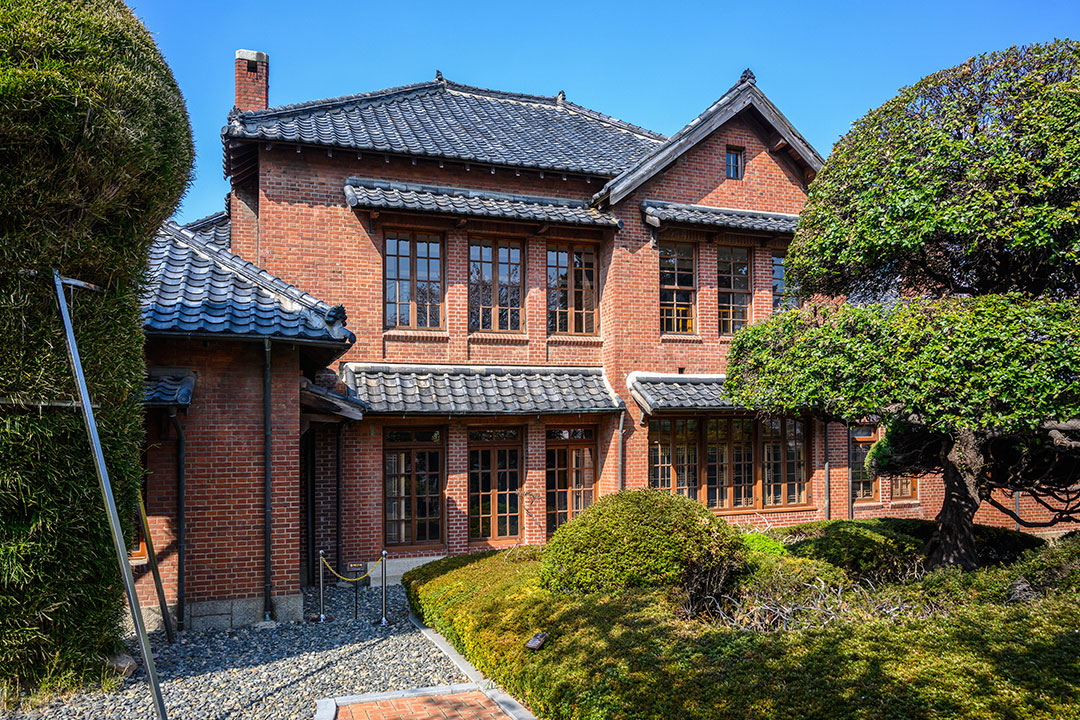 Address 45 Provisional Capital Commemorative-ro, Seo-gu, Busan
Phone +82-51-244-6345
Hours 9:00~18:00 (Closed on Mondays)
[6 PM] Overlooking Busan from Sanbok Road
Sanbok Road is the perfect place to see both the past and the present of Busan. Cutting through the middle of the mountain, Sanbok Road was formed in 1964 around the mountain village. It was from around the time of the port's opening that people started settling down up on the mountain. Many refugees who lost their homes during the Korean War found their footing here. Sanbok Road connects Seo-gu, Jung-gu and Dong-gu. Since the mural village and other cultural facilities were put up in 2011, there have been many visitors by bus. Gamcheon Cultural Village, famous for colorful homes painted in pink and blue, and Choryang Ibagu-gil, a great spot for night views, are among the famous spots along the road. A bus ride will take you up and down the mountain, not to mention some steep curves, and it'll feel like being on a roller coaster. Get off halfway up the mountain and soak in the view of tiny houses and the ocean. It'll take your breath away. You'll wonder if it's even the same Busan you've known all along. 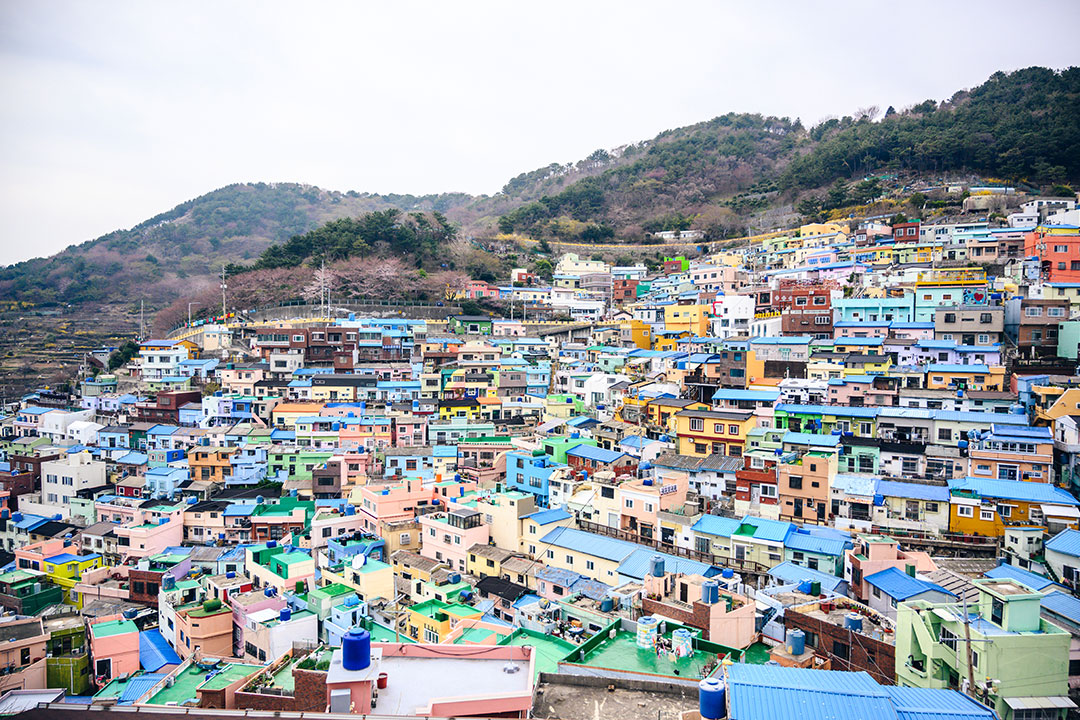 Address Gamcheon Cultural Village Information Center, 203 Gamnae-2 ro, Saha-gu, Busan
Phone +82-51-204-1444
Where to Stay in Busan: LOTTE HOTEL BUSAN
LOTTE HOTEL BUSAN is a 15-minute drive from Busan Station. It's also close to Seomyeon Station. With some 650 guest rooms, LOTTE HOTEL BUSAN stands tall in Seomyeon, the heart of Busan. It offers spectacular views of the bustling city. If you're a baseball fan, be sure to book a night at Choo Shin-soo Star Room. The hotel is also connected with LOTTE Department Store, and foreign travelers may also shop at the duty free store inside the hotel. 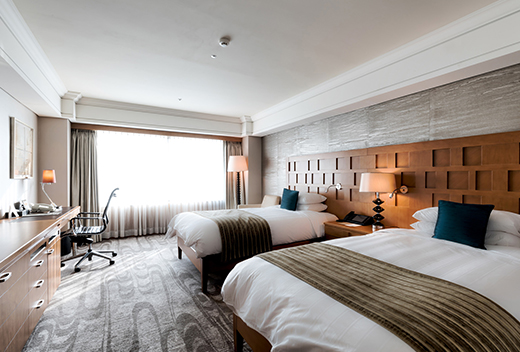 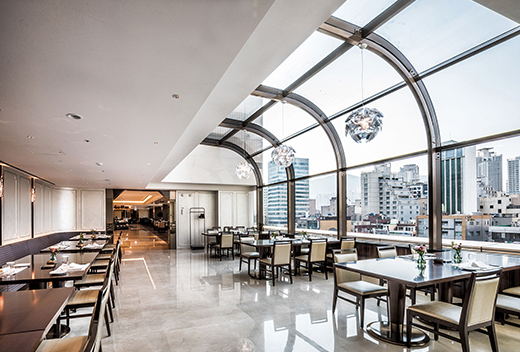 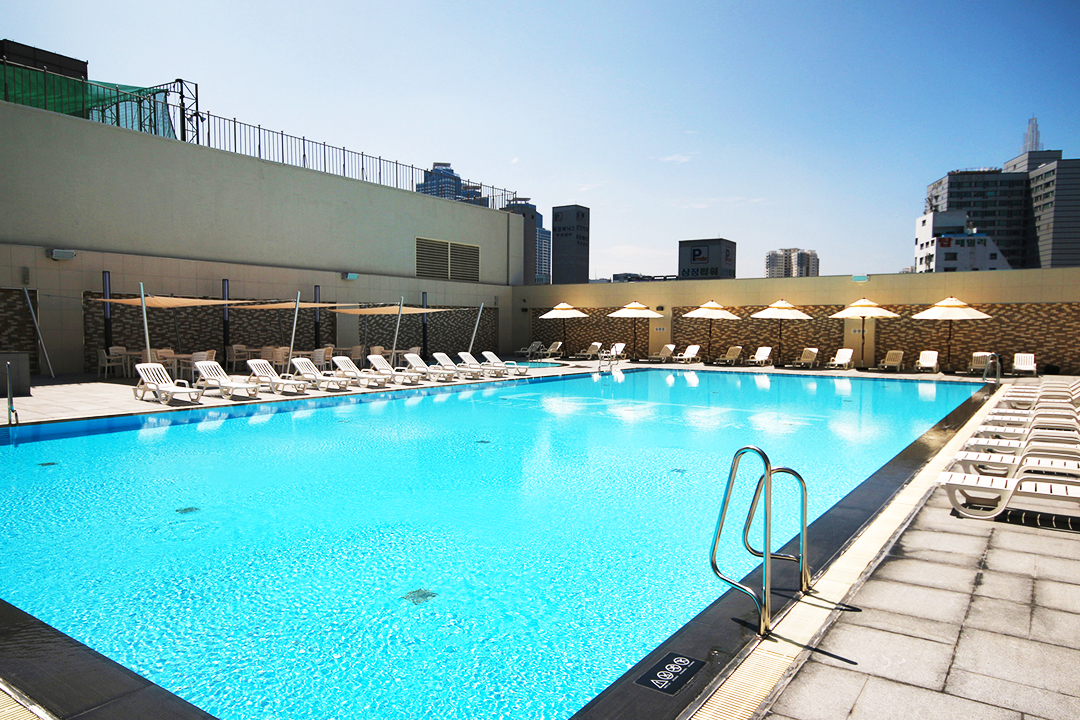