[DAYTRIP] Into the History and Nature of Niigata Prefecture
After a long winter, Japan’s Niigata Prefecture flourishes with fun activities available only in the green seasons. The city of Joetsu offers a taste of unique cultural and historical experiences, and Mount Myoko and Myoko Kogen where the snow has melted allow you to share breaths with the nature. A day in Niigata Prefecture is full of enjoyable discoveries.
There was a time when a trip meant rushing to check out every single famous tourist site in your destination. Today’s trip is a more sophisticated, evolved experience. Instead of going to where everyone else does, people seek out places only they would know about, prioritizing their own appreciation of a travel destination more than the evaluation of other people. The latest trend of small city tours shares the same concept. Even without a dazzling skyline or luxurious shopping malls, the history and natural beauty of a small town that has stubbornly preserved its heritage without caring about the worldly views can touch a traveler’s weary mind like a homely soup made with no artificial additives. One day you could walk to wherever your gut tells you to, learning about a simplistic style of living, and the next day you can have a relaxing staycation at a lodging in an unfamiliar city. Niigata Prefecture of Japan can be a perfect place for all that. You can tour the small cities of Joetsu and Myoko that are relatively unknown, and enjoy a bit of luxury at LOTTE Arai Resort offering impeccable services for your relaxation and pleasure. All you need to pack is comfy shoes and easygoing attitudes. 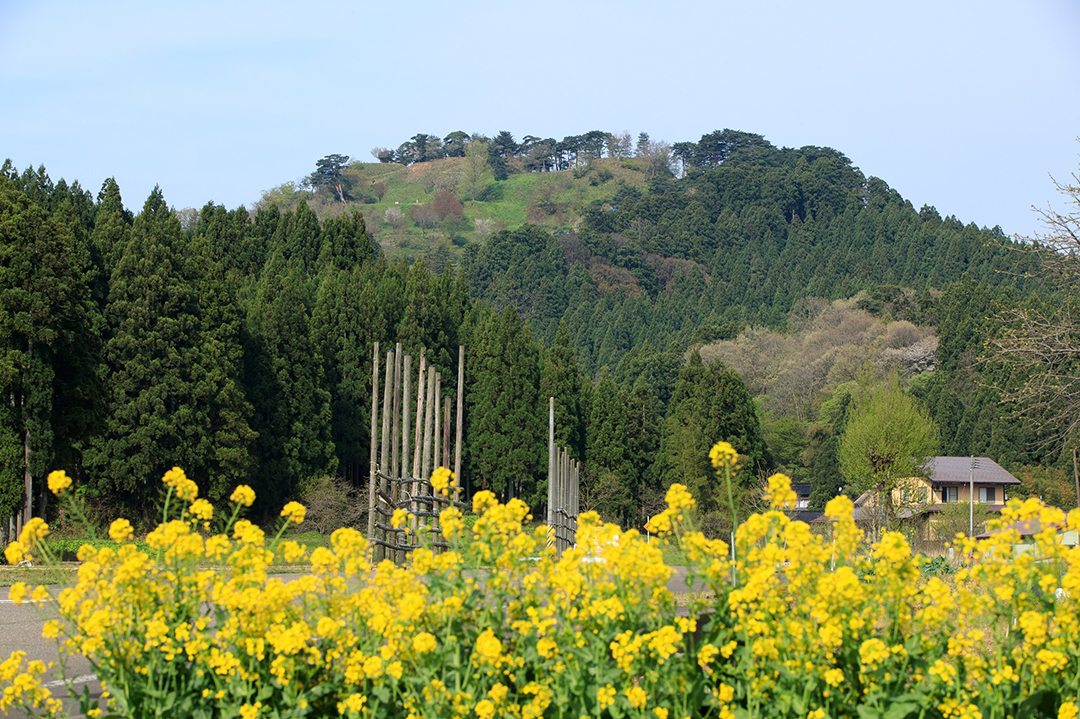 [10AM] Meet Legendary Uesugi Kenshin at Kasugayama Shrine
The small city of Joetsu was the foothold of legendary general Uesugi Kenshin who unified Niigata Prefecture, once called Echigo. He lived in the Sengoku period(1467-1573) during which battles continued all over Japan for the position of ‘shogun’ who has the highest military rank with near-absolute power to rule over the territory. Ranging with distinguished warlords such as Takeda Shingen and Oda Nobunaga, Uesugi Kenshin led an ascetic life unlike his peers, and had a deep understanding of poetry and calligraphy. He was revered by many people as “God of War” for his noble character and cultured mind, not to mention his prowess on the battlefield.

Currently, Mount Kasuga is where most traces of Uesugi Kenshin can be found in Joetsu. Located on the hillside of the mountain, Kasugayama Shrine is known to be home to Kenshin’s spirit. After making a long trek up the dense forest and stone stairs, you’ll reach ‘torii’, a gate believed to divide the mundane and the sacred in Japanese culture. Go through the gate after catching a breath. Now you’ll find the Uesugi family’s symbol drawn on the curtains at the entrance to the main temple as well as some of the weaponry once used in battles on display. The memorial hall next to the temple exhibits Uesugi Kenshin’s belongings and writings, showing the respect the local community has for the war hero. 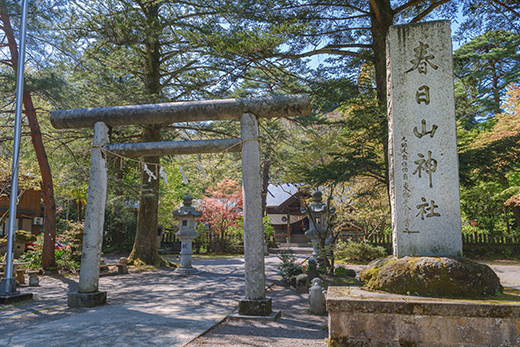 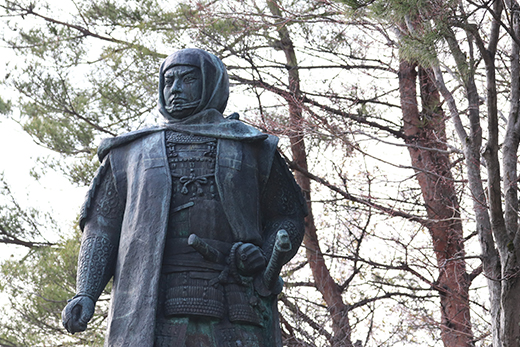 Direction Take the JR Shinetsu Main Line to Naoetsu Station. Transfer to a Kubiki Bus and get off at the Kasugayama-shita stop. The shrine is a 30-minute walk from there. By car, Take the Joetsu-Takada Interchange to get off the expressway and drive for 15 minutes.
Hours 9:30~16:30 (Closed Dec. 1~Mar. 31 annually)
Address 1743 Daizu, Joetsu City, Niigata Prefecture
Phone +81-25-525-4614
[12PM] Visit Rinsenji Temple, Where Hero Rests
After Kasugayama Shrine, head to Rinsenji Temple built in 1497. Uesugi Kenshin lived here from age 7 to 14, honing his academic and martial art skills and developing his religious faith. He was buried in the same place after dying at the age of 49. In a way, it is where his life as a warlord began and ended. Take a look around the symbolic mountain gate, the main temple and the Treasure Hall where the portrait of Uesugi Kenshin and the plaque of his own handwriting are on display. Having served as a religious pillar of Echigo for hundreds of years, the temple has a sacred and dignified feel. Uesugi Kenshin’s grave is also on a quiet mountain slope behind the temple. Nearby is a tower built for the repose of the soldiers who sacrificed their lives in the Battle of Kawanakajima, the biggest fight during the Sengoku period to protect Echigo from the invasion of Takeda Shingen. Experience a moment of time travel on Mount Kasuga, imagining the bloodshed of Sengoku, while strolling in the peaceful forest. 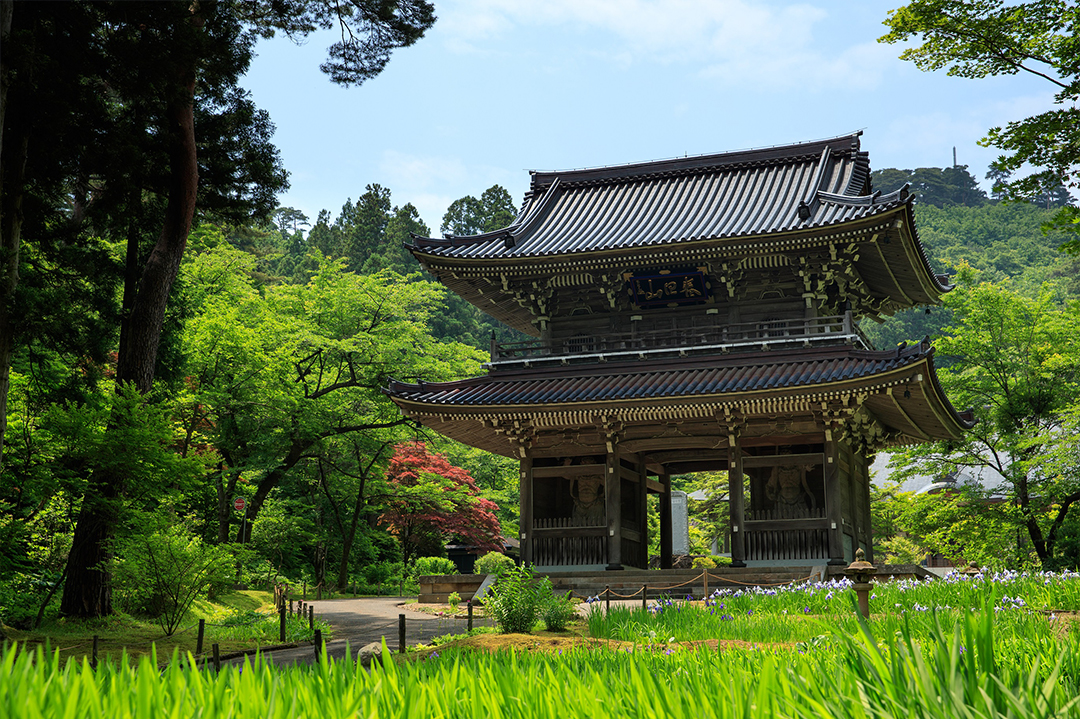 Direction Take the JR Shinetsu Main Line to Kasugayama Station and walk 20 minutes. By car, get off at the Joetsu Interchange and drive 15 minutes.
Hours 9:00~17:00
Address 1-1-1 Nakamonzen, Joetsu City, Niigata Prefecture
Phone +81-25-524-5846
[2PM] Takada Komachi, Tranquil Charm of Small Village
Arriving at Takada Station, you suddenly enter the Meiji period (1868-1912). Takada Komachi is a remake of “Kyukotsumaya,” old townhouses that existed about 200 years ago. There are still people who work and reside in a Machiya-style house. To help pedestrians in the snowy winter season, an appentice, called ‘gangi’ in Japanese, is installed in the front of the houses. It’s the longest one in Japan, at 16 kilometers. At the Exchange Hall in the center of the village, you can check out the replica of Machiya interiors and buy souvenirs as well as tea and local sake. Nearby historic facilities include Kenuki, an old shop producing and selling tweezers with 150 years of tradition, Takada Sekai-kan, a movie theater operating since 1911, and Goze Museum Takada exhibiting documents on ‘goze’, a term for a blind female Japanese who would sing or play a musical instrument begging for money. Standing somewhere between the past and present, you will feel comfort in the unpretentious way of life led by the Takada community. 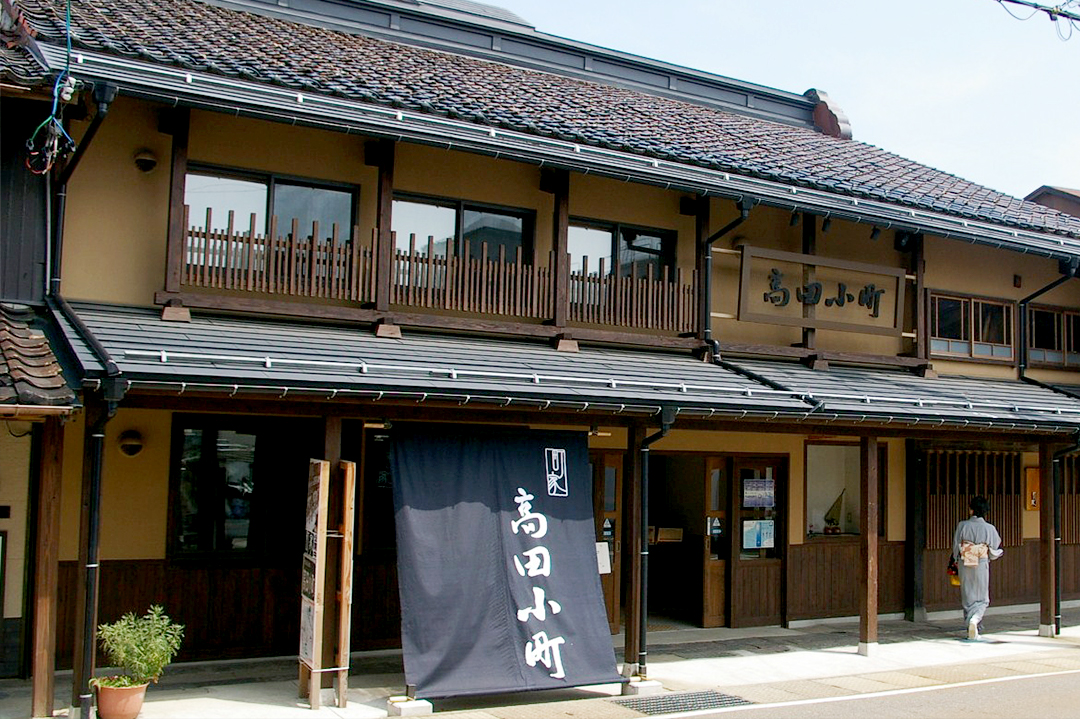 Direction Take the Myoko Haneuma Line to Takada Station and walk 10 minutes. By car, drive 15 minutes from the Joetsu Interchange.
Hours Takada Komachi Exchange Hall 10:30~13:30, 17:30~19:30
Address 6-3-4 Honmachi, Joetsu City, Niigata Prefecture
Phone +81-25-526-8103
[4PM] Stroll Through Japan’s Top 100 Takada Castle
Today’s Takada Komachi exists entirely thanks to Takada Castle. In 1614, when Matsudaira Tadateru, the sixth son of Tokugawa Ieyasu began building the castle, the neighboring town also started flourishing. In a rare style in Japanese history, the bank around the castle was built with clay, instead of stone, and moats were created by redirecting the river. Although the majority of the castle was burned down during the Meiji period, the castle’s symbolic Sanju Yagura, a three-story turret restored in 1993, and a vast park lot spanning half a million square meters give you a hint at the magnificence of the original castle. You can check out old maps and photographs as well as a miniature model of the castle at the display room. If you go up to the observation deck on the third floor, you get a full view of the park and the town. Takada Castle is worth visiting in all four seasons but come springtime, the castle’s splendor is at its peak. While the sun is up, about 4,000 cherry blossom trees burst into bloom, and at sundown, some 3,000 lanterns light up the river. Chosen as Japan’s top three cherry blossom viewing spots at night, over a million tourists head to Takada Castle each year. 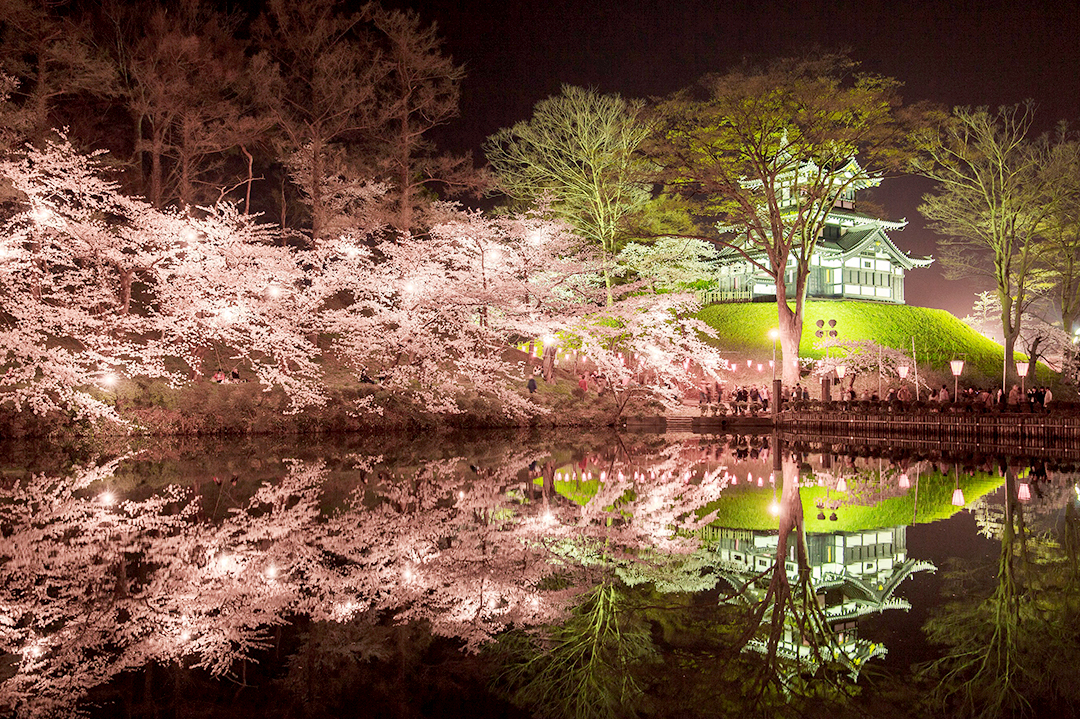 Direction Take the Myoko Haneuma Line to Takada Station and walk 25 minutes. By car, drive 15 minutes from the Joetsu-Takada Interchange.
Hours 9:00~17:00 (Closed: Mondays, year-end holidays, and occasional off days)
Address 5-6 Motoshirocho, Joetsu City, Niigata Prefecture
Phone +81-25-526-5111
[6PM] Taste Authentic Sushi at Restaurant Asahi
For the evening, we decided to enjoy a staycation at the resort, instead of touring. In the bus headed to LOTTE ARAI RESORT, you will gradually leave the images of the city behind and soon enough arrive at old-fashioned buildings nestled at the foot of a mountain. After checking in, head to Japanese restaurant Asahi for dinner. The reserved dinner menu is none other than sushi. Sushi is one of the most popular delicacies of Niigata Prefecture adjoining the East Sea. It’s a simple meal of sliced fish on top of white rice, but it is hard to get the right taste unless prepared by professional hands. At Asahi, a seasoned chef offers a sushi course menu using the freshest seafood ingredient of the day. The strong scent of the ocean from the fish and the sweetness of the white rice intensify as you keep chewing. The texture of sushi is also superb. Now order some local sake to savor the best meal in Niigata Prefecture to your heart’s content. 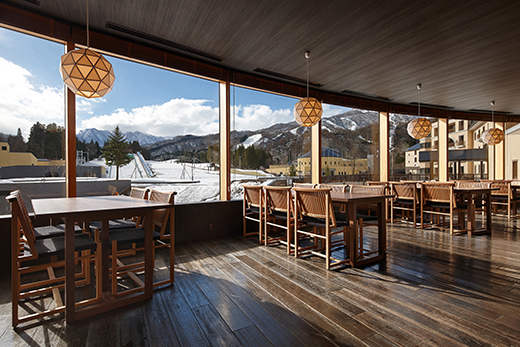 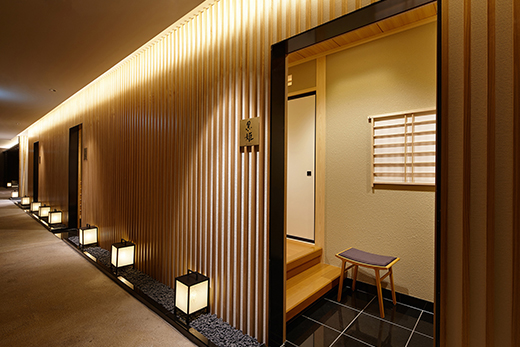 Direction Take Hokuriku Shinkansen or the Myoko Haneuma Line to Joetsu Myoko Station. Take LOTTE ARAI RESORT Shuttle Bus at the West Exit. It takes 30 minutes to the resort.
Hours Breakfast 7:00~10:00, Lunch 11:30~14:30, Dinner 17:30~23:00
Address LODGE 2F, 1966 Ryozenji, Myoko City, Niigata Prefecture
Phone +81-255-75-1126
[8PM] Enjoy Night Sky View from Hoshizora Onsen
Even in a small city, you need a great deal of energy to experience new landscapes and a lifestyle of the locals in an unfamiliar setting. ‘Onsen,’ or a hot spring, is great for loosening up tired senses and recovering from the fatigue of a trip. Like its name meaning “a starry sky,” Hoshizora Onsen of LOTTE ARAI RESORTprovides serene yet romantic beauty, especially at nighttime. The star-filled night sky viewed from the outdoor onsen reminds you of what you’ve been missing during the busy urban life. Close your eyes and let the breeze cool off the sweat while sitting in the hot spring. Sprung up from 1,750 meters below ground, the soft alkalescent spring water washes off the dirt on your skin as well as your inner self, giving your mind and body a sense of airiness by the time you leave the bath. 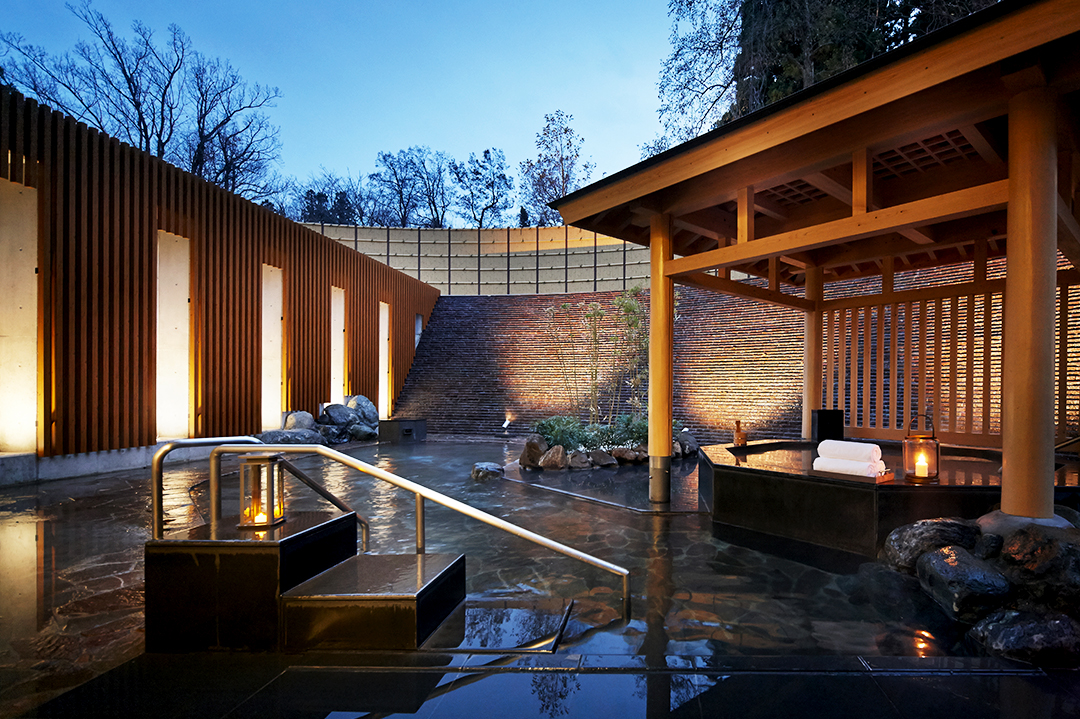 Hours Monday~Friday 6:30~9:00 (Hotel guests only), 13:00~23:00 (Final admission at 22:30) / Saturday~Sunday 6:30~23:00 (Final admission at 22:30)
Address Hoshizora Onsen & Pool Front Desk 2F, 1966 Ryozenji, Myoko City, Niigata Prefecture
Phone +81-255-75-1114
Lodging in Niigata Prefecture: LOTTE ARAI RESORT
Nestled in Mount Myoko, LOTTE ARAI RESORT does not stop at offering lodging services. Rather, it becomes a great travel destination in itself, adding a sense of class to your vacation. Classy buildings are full of entertainment options ranging from various dining facilities, local specialty shops, a swimming pool, and a karaoke. In addition, the resort offers activities including skiing, nicknamed the flower of winter sports, and seasonless adventures at Tubing Park, Zip Tour, and Bouldering, making it nearly impossible to leave the resort. What’s more important, though, is the guest room. Surrounded by the serene forest, the guest room gives the coziness of a European cabin. The Haeon bedding, made with cutting-edge technology and premium materials, promises a restful sleep only available at LOTTE HOTELS & RESORTS. As you lie down on the white bedding of your room after a hot bath at ‘onsen,’ you will be overwhelmed by a sense of relaxation and happiness you can only feel on vacation. 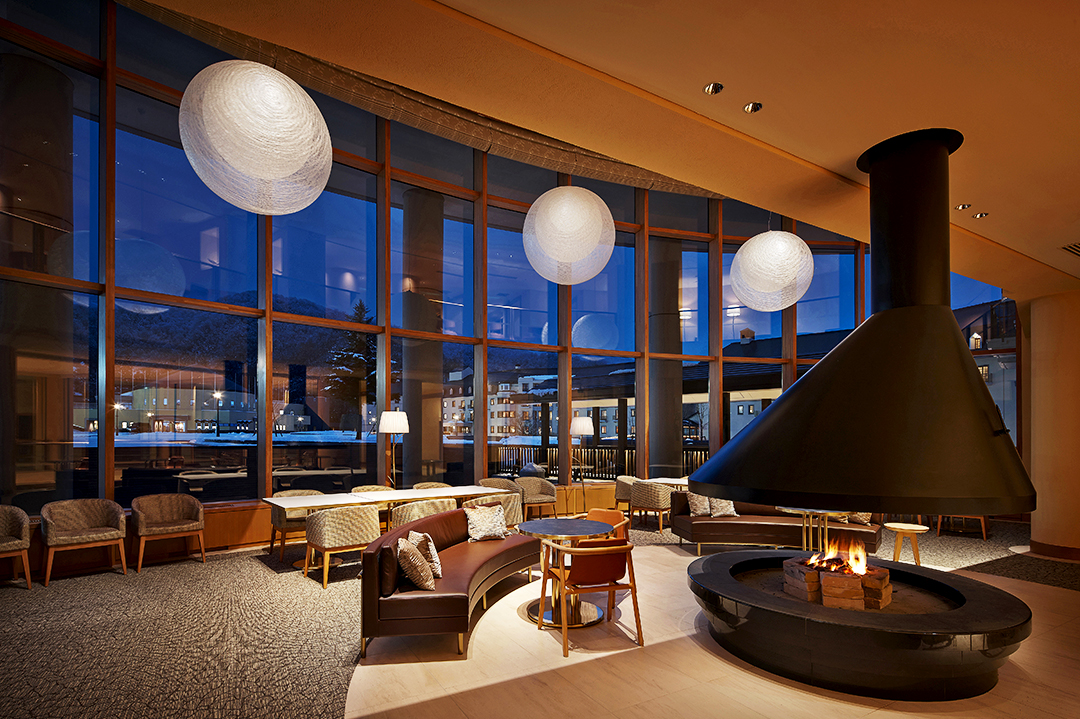 Address 1966 Ryozenji, Myoko City, Niigata Prefecture
Phone +81-255-75-1100
Homepage www.lottehotel.com/arai-resor
[9AM] Take on Trekking on Myoko Kogen
After the snow melts on Myoko Kogen, hikers are welcomed by lush greens in summer and then colorful foliage in autumn. One day is not enough to check out lakes, hot springs, and waterfalls strewn about the highland. If you must choose just one, though, it should be the 55-meter-high Naena Falls. At the same height as a 20-story building, an impressive volume of water ceaselessly plummets with a thundering sound. You would understand why it’s also known as “Earthquake Waterfall.” There are rich anions in the air near the waterfall, they say, making it a great place to begin your day. Enjoying a cool soba or yummy soft ice cream at nearby eateries can add to your happiness. If you are not confident about trekking, try taking the Myoko Kogen Sky Cable, operating only during green seasons, to admire the landscape from above. After experiencing Myoko Kogen in any manner, you will surely fall in love with the beauty and relaxation Mother Nature offers in a small city. 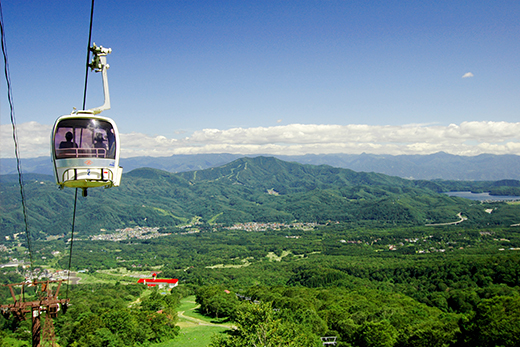 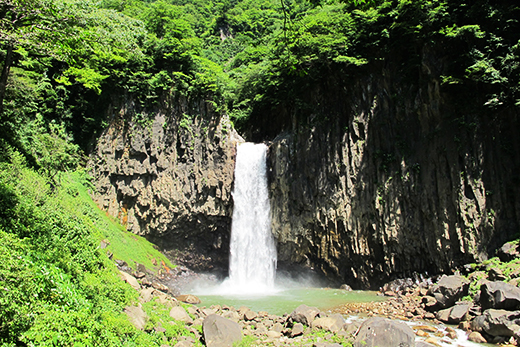