The War of Stars, Tchaikovsky Competition, Returns After 4 Years
If you have passion for classical music, go to Russia this June. Classical tunes would fill the air in St. Petersburg and Moscow where the International Tchaikovsky Competition will be held this year.
The International Tchaikovsky Competition first began in 1958 under the Soviet regime, and has since produced distinguished musicians such as pianists Vladimir Ashkenazy and Grigory Sokolov and violinist Gidon Kremer. Held every four years, the competition includes instruments of piano, violin, and cello, as well as the voice(male and female).
The first Korean to place in the competition was Chung Myung-whun who won the joint second prize( without the first prize winner) in piano in 1974. In an era when people rallied against anti-communism, Chung became a national hero, having won the highest honor in the center of an enemy state. The day he returned to Korea, a car parade was held from Gimpo International Airport to downtown Gwanghwamun. 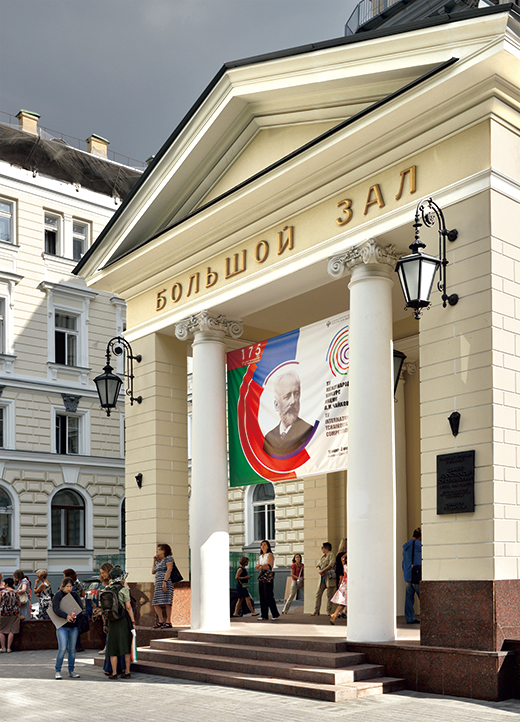 “From June 17 to 27, applications from all over the world would be submitted by young musicians who want to participate in the 16th International Tchaikovsky Competition held in Moscow and St. Petersburg. Ages between 16 and 32 are eligible. For the category of vocal, an applicant must be at least 19 years old to ensure puberty has passed.”
Korean Musicians Dominate Russia in 2011
Since the 1990s, Korean musicians have occasionally had their names listed among prize winners. Baritone Choi Hyun-soo won first prize in the male solo vocal in 1990, and pianist Paik Hae-sun came in third in piano in 1994. In 2002, baritone Kim Dong-seub won third prize in the male solo vocal, and pianist Lim Dong-min placed fifth in piano.
A ground-breaking accomplishment took place in 2011. During the award ceremony held at the Tchaikovsky Concert Hall in Moscow on June 30, a series of Korean names were called as the winners. Bass Park Jong-min and soprano Seo Sun-young each won first prizes in the male and female solo vocal categories. Pianists Son Yeol-eum and Cho Seong-jin won second and third prizes in piano, and violinist Lee Ji-hye ranked third in violin. Among 19 musicians who placed in the competition, five were Korean. Cho Seong-jin, who later won the International Chopin Piano Competition in 2015, was 17 years old then, being the youngest among Korean winners. Park Jong-min and Seo Sun-young were each awarded 20,000 euros, Son Yeol-eum and Cho Seong-jin 19,000 euros, and Lee Ji-hye 12,000 euros. Host-country Russia only had Danil Trifonov won first prize in piano that year. In the next competition held in 2015, Koreans had four contestants placing third, fourth, and fifth. Baritone Yoo Han-sung won third place in the male solo vocal, Clara-Jumi Kang and Kim Bomsori ranked fourth and fifth in violin, while Kang Seung-min came in fifth in cello. 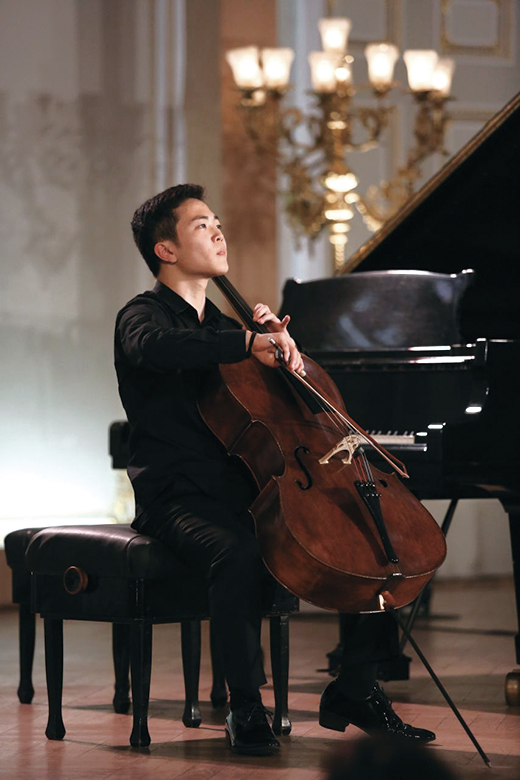 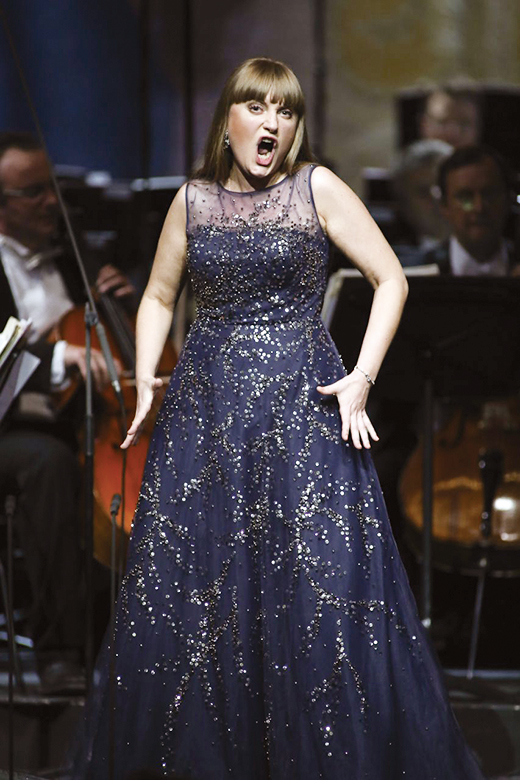 The competition for cello and singing takes place in St. Petersburg

Both Musicians and the Press Vying for Attention
The 16th International Tchaikovsky Competition will be held from June 17 through 27 this year in Moscow and St. Petersburg. A press conference took place on February 29 at the Mariinsky Theatre in St. Petersburg, which will soon turn into a battlefield for the world’s most-talented young musicians. Having signaled the start of the competition, the application process began in April. To participate in the instrument sections, applicants must be between ages 16 and 32, while for the vocal section, due to the change of voice during puberty, the lower limit is age 19.
The two-week-long competition is more like a global music festival held in one of the top concert halls in Russia. Submitting an application does not guarantee a ticket to the main stage. Through a strict video auditioning process, the jury selects 30 pianists, 25 violinists, 25 cellists, and 20 male and 20 female vocalists to go through three main rounds. The entire competition is open to not just the jury consisting of world-renowned musicians but also the audience. Noticeably, each juror’s national flag is displayed on the jury table. 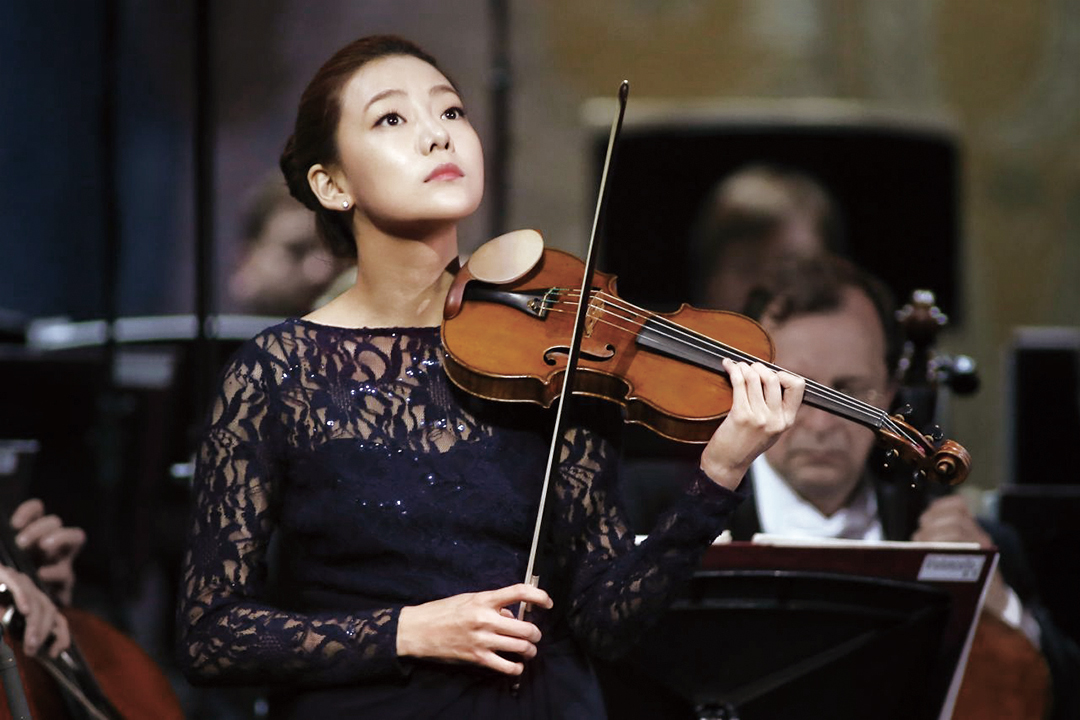 Clara-Jumi Kang, who finished fourth in violin in 2015

For the third and final round, the jury selects six contestants from each instrument section and four from the male and female vocal sections, respectively. Whereas the first and second rounds allow only the contestant and a piano accompanist when needed, the third round takes place on a much larger scale. Russia’s leading conductors and ensembles including the Svetlanov State Symphony Orchestra and the Moscow Philharmonic Orchestra will perform with the finalists. It is rare to find a contestant who’s had experience working with Russian orchestras. For that reason, the organizing committee even splits the rehearsal time evenly among the contestants.
It’s not just the musicians who are thirsty for attention. The press wants a fair share as well. In 2015 when the entire competition was streamed live worldwide, every competition venue was packed with state-of-the-art broadcasting equipments. Every intermission, reporters from around the world engaged in interviews with the contestants or jury members. Just considering the fact that it’s a great opportunity for them to appear on camera, the contestants would try to grab the attention, promoting themselves to music fans across the globe. 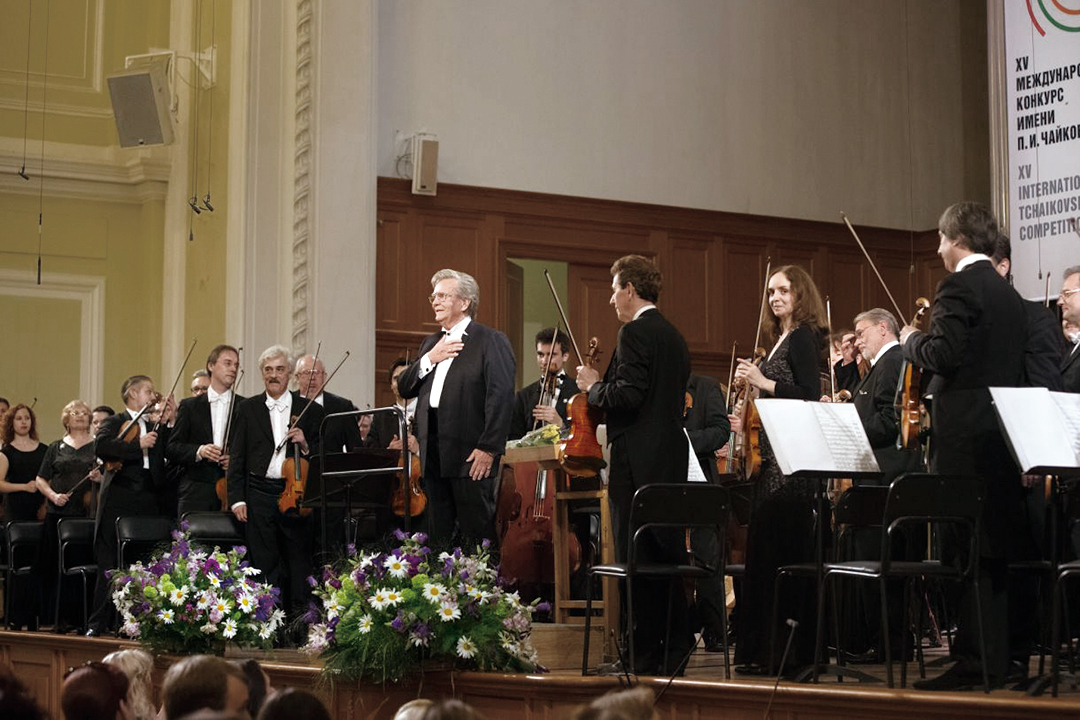 Opening of the Tchaikovsky Competition

Stars’ Battlefield, Moscow and St. Petersburg
Originally held only in Moscow, the organizing committee selected the second venue of St. Petersburg, the city of art, in 2011. The piano and violin categories take place in Moscow, while the cello and vocal categories compete in St. Petersburg. For the 2019 competition, the new sections of woodwinds and brass instruments will be added in St. Petersburg. The distance between Moscow and St. Petersburg is about 700 kilometers. It takes about 3 hours and 40 minutes by Russia’s bullet train Sapsan.
The final round in Moscow will be at the Great and Chamber Halls of the Moscow State Tchaikovsky Conservatory and Zaryadye Concert Hall. Founded in 1866, the Moscow Conservatory is where Tchaikovsky used to teach, and is currently known as the Tchaikovsky Conservatory. Throughout what can be considered the musical version of Star Wars, a large portrait of Tchaikovsky will be displayed in the Great Hall reminding participants of how the competition originated.
In St. Petersburg, the final performances will take place in a total of seven venues including the Mariinsky Theatre (Mariinsky II) and the Grand Hall of the D. D. Shostakovich St. Petersburg Academic Philharmonia where main events will be arranged. 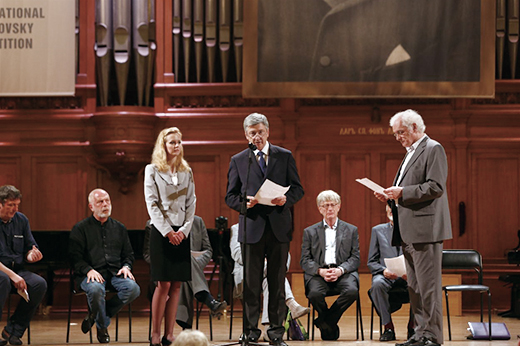 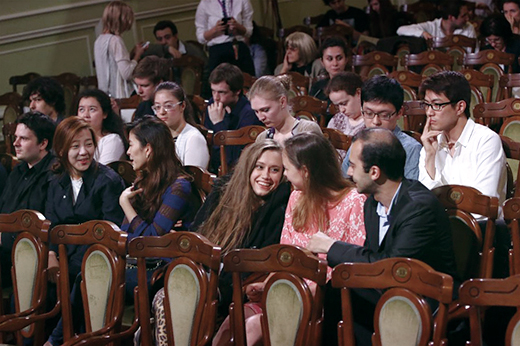 Experience the Legacy of Russia and Tchaikovsky
Tchaikovsky has left many cherished pieces involving piano, violin, cello, and singing. That’s why the competition focuses on these instruments and the voice. By trying to master the music of Tchaikovsky included in the repertoires for the qualifying rounds, auditions, and three main rounds, contestants become immersed in the legacy of Tchaikovsky and the musical culture of Russia. In particular, concertos to be played in the final round are one of the most frequently-performed pieces in the present. It is a great experience, for that reason, for young musicians to have a chance to perform those major numbers on a global stage.
With the newly-launched categories of woodwinds and brass instruments, it is a different situation. Tchaikovsky did not compose any major pieces in those categories. Although his six symphonies all give brass instruments a big presence, he didn’t leave any music solely intended for them.
For the final round of woodwinds, “Lensky’s Aria” from the opera Eugene Onegin is included in the program. This classic tune has been rearranged for various instruments, going beyond the original intention. In the brass category, arrangements of Tchaikovsky’s works are included again. In other words, the competition proposes the music of Tchaikovsky as a challenge and the ultimate goal.
The competition begins on June 17 and ends on June 27. After the award ceremony in Moscow, a ceremonial gala concert featuring the winners will be held at the Moscow State Tchaikovsky Conservatory and the Mariinsky Theatre in St. Petersburg, on June 28 and 29, respectively. 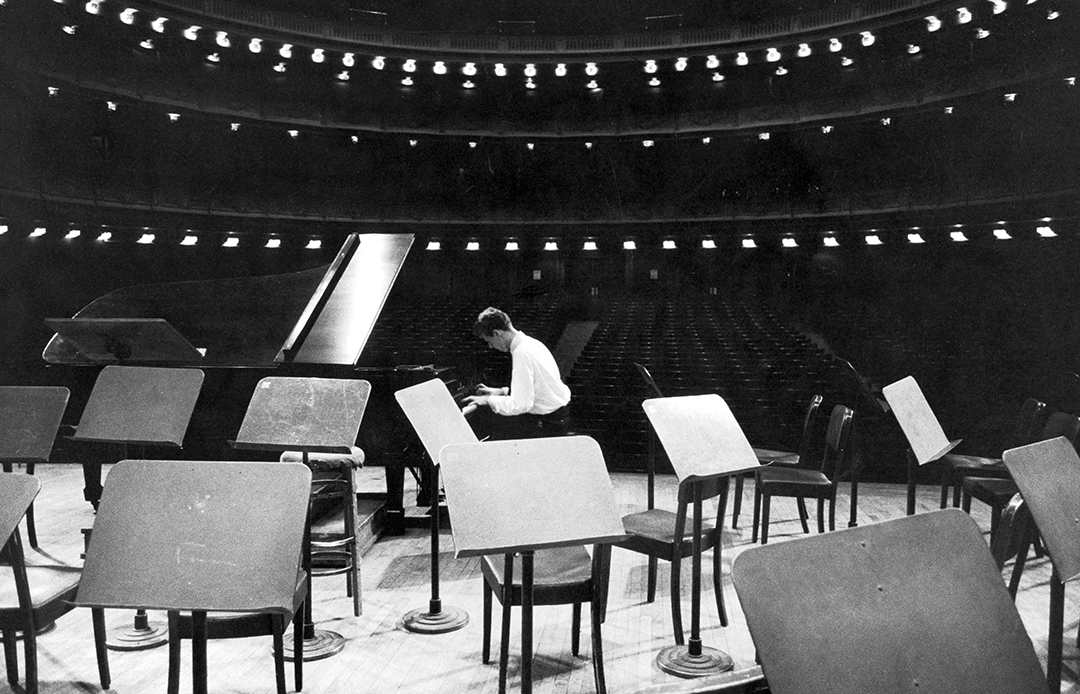 Van Cliburn, the gold medal winner in piano at the inaugural competition in 1958

It’s Only the Beginning
In international competitions where older generations used to simply place high, younger musicians of Korea are now bringing home wins and sweeps. Since the opening of Korea National University of Arts School of Music in 1993, Korean expression tojong emerged with a new meaning. It refers to Korean-born students who have only studied domestically but have enough potential to succeed in overseas arena, in contrast to the ones who were born in Korea but have received musical training in foreign countries since childhood.
Perspectives vary on the meaning of international competitions. Some say that overzealous Korean parents would move their home three times to teach classical music to their child, just like the mother of ancient Chinese philosopher Mencius. Some also comment that Asia and Korea are emerging as new classical markets, replacing the aged European classical scenes. Others express concerns that unlike European musical training, which is shifting its focus from mastering techniques to promoting creativity, Korea still focuses too much on the technical aspect of performance.
In the 1995 Queen Elisabeth Competition, known as one of the top three prestigious competitions for instrumentalists, no Korean advanced to the first preliminary round. When 22 contestants passed the same round in 2011, Belgium’s state-run broadcaster sent experts to Korea to film a documentary entitled “The Mystery of Music Korea.” If this continues, a century later, people may find statements like “Korea is no longer in the periphery of classical music. Rather, it is the new center.” while reading a book discussing Western classical music history.
Music competitions are often compared to the Olympic Games. That is not an appropriate comparison. If you win in the Olympics, you become a sports star with your gold medal. That’s the end goal for most athletes and it often leads to their retirement. However, winning a competition for young musicians is far from being the end. It is one of many gateways lying ahead of them. It is only the beginning. 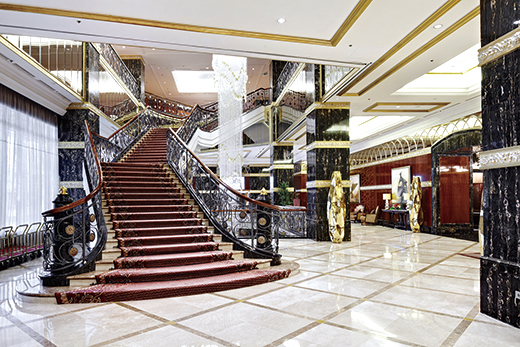 Where to Stay: LOTTE HOTEL MOSCOW
LOTTE HOTEL MOSCOW, the first overseas chain by a Korean hotel brand, has won the “Best City Hotel of Russia” awarded by Condé Nast Traveler magazine two years in a row. Located on the New Arbat Avenue, close to the Kremlin and Bolshoi Theatre. At 7,117㎡, the hotel has 10 floors above the ground and four more underground, with 304 rooms. There are four dining options including OVO by Carlo Cracco by two-michelin-starred Italian chef Carlo Cracco and New York-style fusion Japanese restaurant MEGUmi. 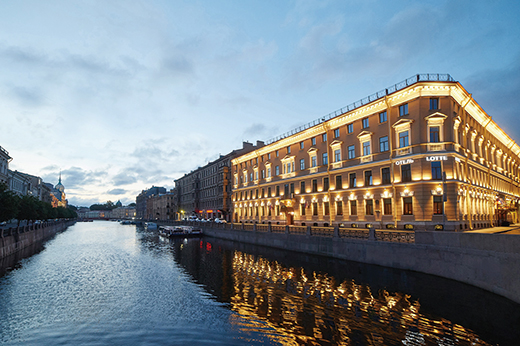 Where to Stay in St. Petersburg: LOTTE HOTEL ST. PETERSBURG
LOTTE HOTEL ST. PETERSBURG is the second Korean hotel to open in Russia in September 2017. It’s located directly across St. Isaac’s Square, the most famous landmark of St. Petersburg. It is also near the Hermitage Museum, one of the world’s top three museums, and the Mariinsky Theatre. The hotel has 150 rooms in 10 different types in the building of six stories above the ground and one underground. Dining options include Japanese restaurant MEGUmi presenting modern Japanese cuisines, The Lounge opening all day long from breakfast to dinner, and L Terrasa on the rooftop offering the beautiful view of Russian white night.