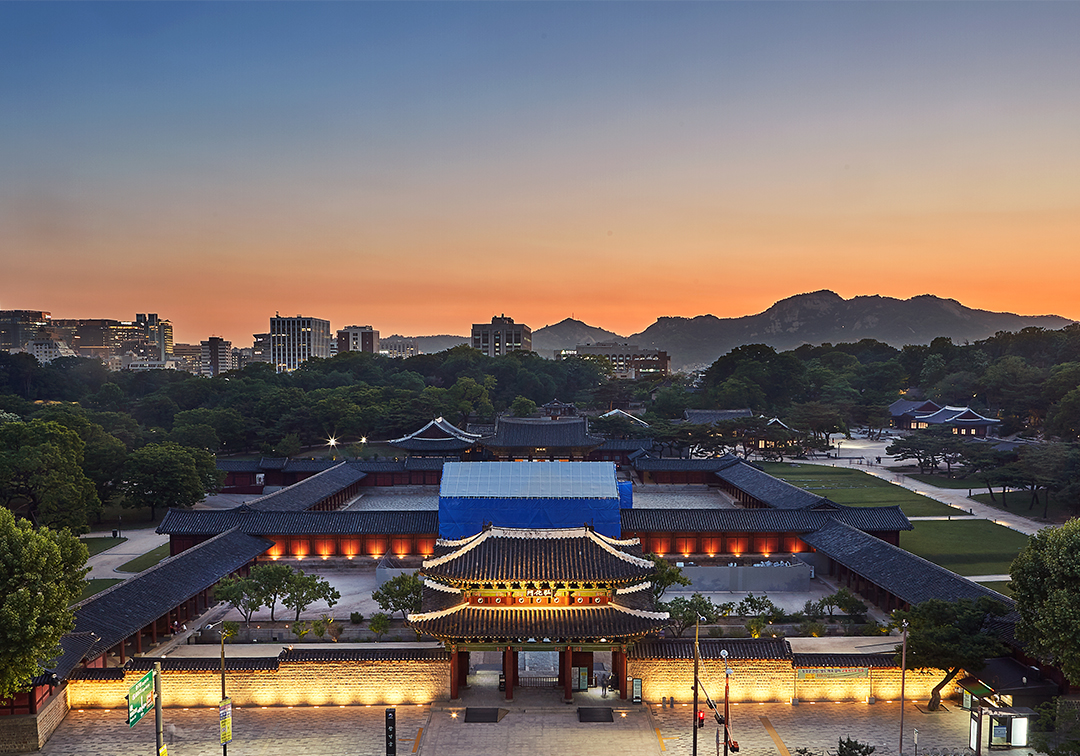 View of Changgyeonggung Palace. Covered in blue tarps is Myeongjeongmun, currently under renovation.

Gate Facing East
Changgyeonggung was the third palace to be erected during Joseon Dynasty, after Gyeongbokgung and Changdeokgung. It's one of Seoul's five major palaces still left standing. Some people still have Changgyeong and Changdeok confused, for these palaces only separated by a fence between them. Changgyeonggung was built to provide extra residential space for Changdeokgung. King Seongjong, the ninth king of Joseon, built Changgyeonggung for his three queen mothers. Though they were separate palaces, people frequented both of them. Together, they were called the 'Eastern Palaces.'
Since it was built as residential space for the royal family, there was said to have been plenty of leeway as far as its structure and arrangement. And this is clearly illustrated by the palace's gate. Whereas most palaces south, the main gate and the main hall both face east. Honghwamun, the main entrance to Changgyeong, is the only one of its kind that opens toward east. And the night stroll begins once you walk through this gate. 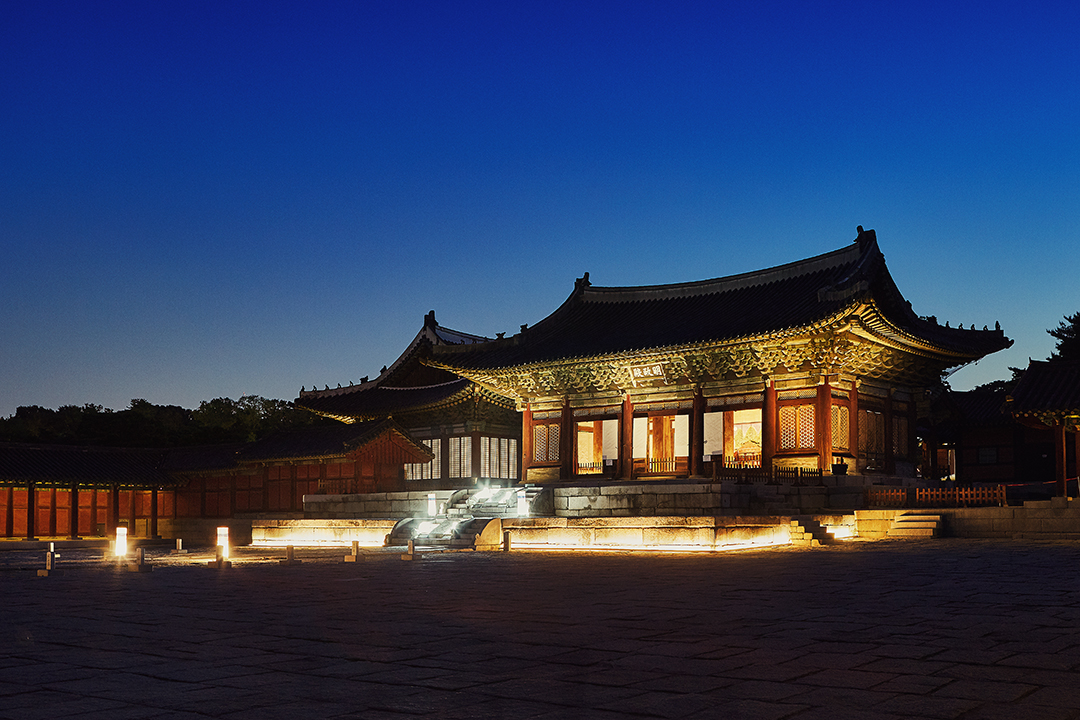 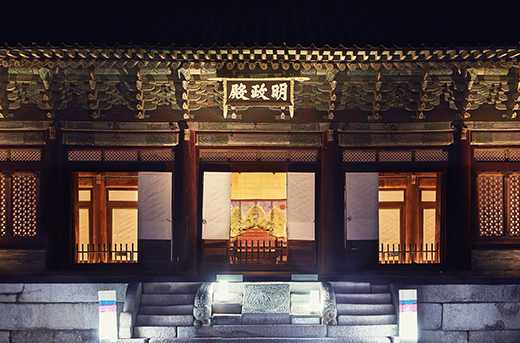 The Oldest Jeongak in Existence
Once you walk past Honghwamun and then Myeongjeongmun, you'll reach the jeongjeon (the main hall), called Myeongjeongjeon. Inside the ground, there's only just enough light to help you get around. And once the sun goes down, it can get fairly dark there. Myeongjeongjeon is more brightly lit than any other place at Changgyeonggung. It was burned down during the Japanese Invasion in 1592, before getting reconstructed under Prince Gwanghae. It remains the oldest Joseon-era jeongjeon still in existence. Myeongjeongjeon hosted state exams and parties for senior members of the royal family. It's not difficult to picture a king enjoying himself sitting in the throne situated at the center of Myeongjeongjeon. 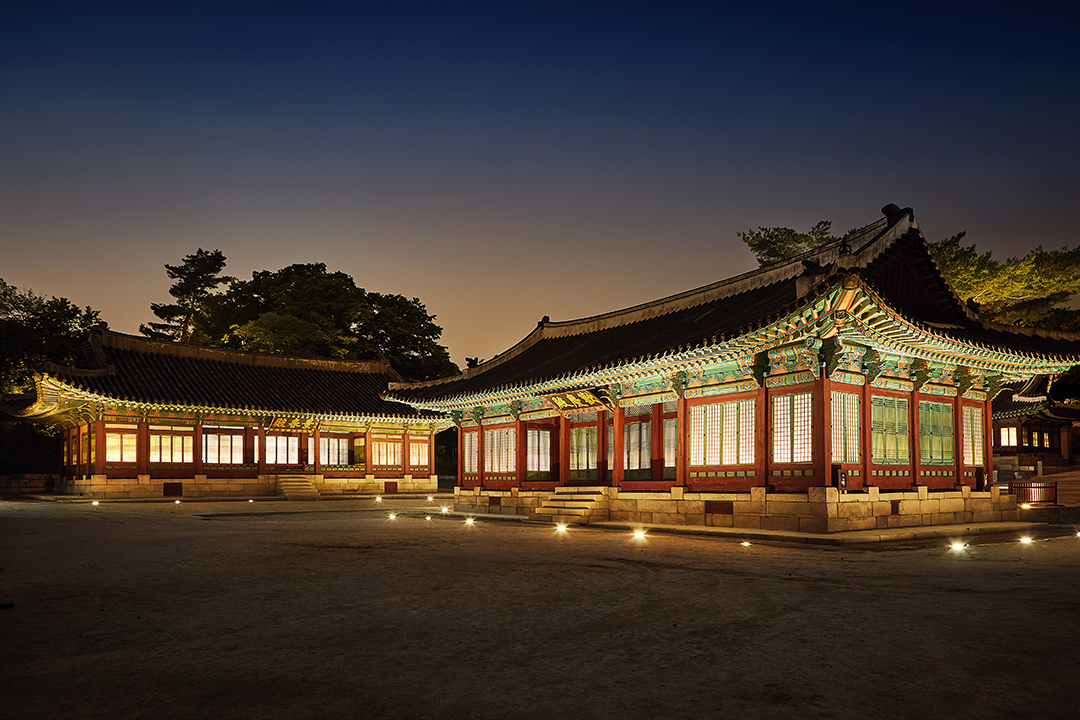 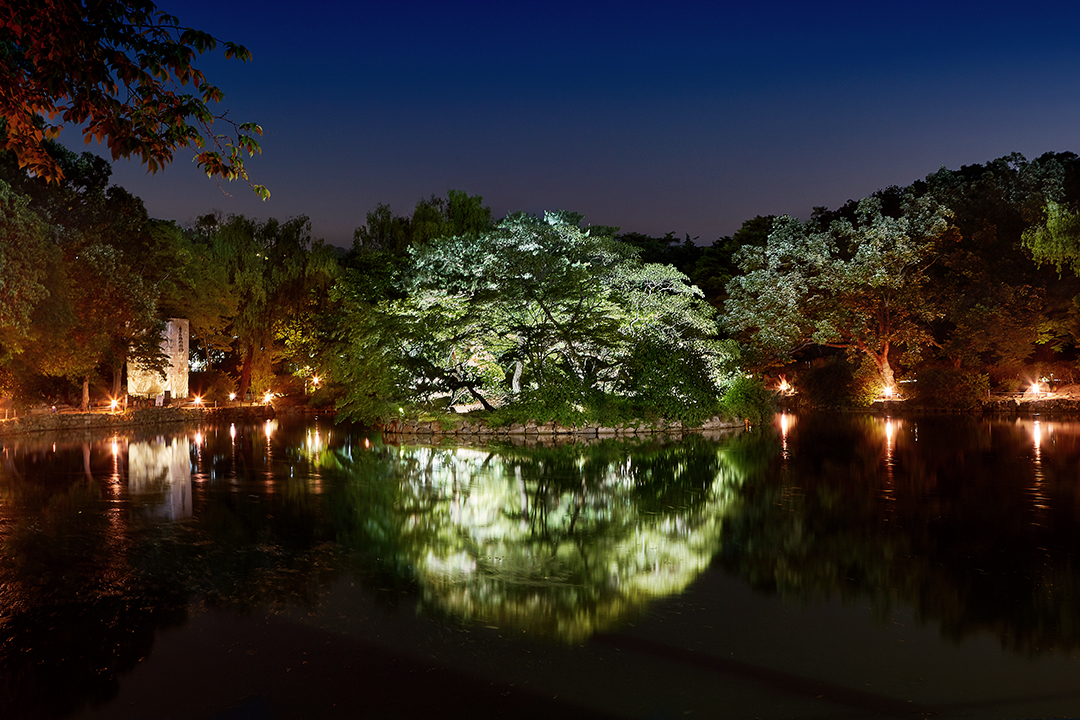 Stage for Comedy and Tragedy
For those of us living in the actual world, a palace is a place of history and imagination. The boundary between reality and imagination gets blurred. And when a lot of things disappear into the dark, it almost feels like you can hear those old stories better. And Changgyeonggung is a palace packed with stories, involving kings and crown princes, and queens and royal concubines, all tangled up tales of romance and feuds. The Changgyeonggung is also deeply connected with historical figures that we're familiar with from the film “The Throne” and the TV series “Jang Hee-bin”.
Munjeongjeon, standing to the right of Myeongjeongjeon, is associated with Crown Prince Sado (the Munjeongjeon you see today was rebuilt in 1986 after the original one was taken down during the Japanese colonial period).  Munjeongjeon was the council hall where the king attended to state affairs and made key policy decisions. It was here that King Yeongjo ordered Crown Prince Sado be sealed alive in a rice chest. The chest was then moved to the courtyard near Seoninmun, south of Honghwamun. Sado died there eight days later, succumbing to starvation and suffocating heat.
Tongmyeongjeon served as the master bedroom for the queen and also as the place where the queen looked over court ladies. It was the setting for many royal power struggles. Yeongchunheon was where King Jeongjo drew his final breath. As you tour these places, your senses will grow sharper and those old tales will become more vivid in the dark. 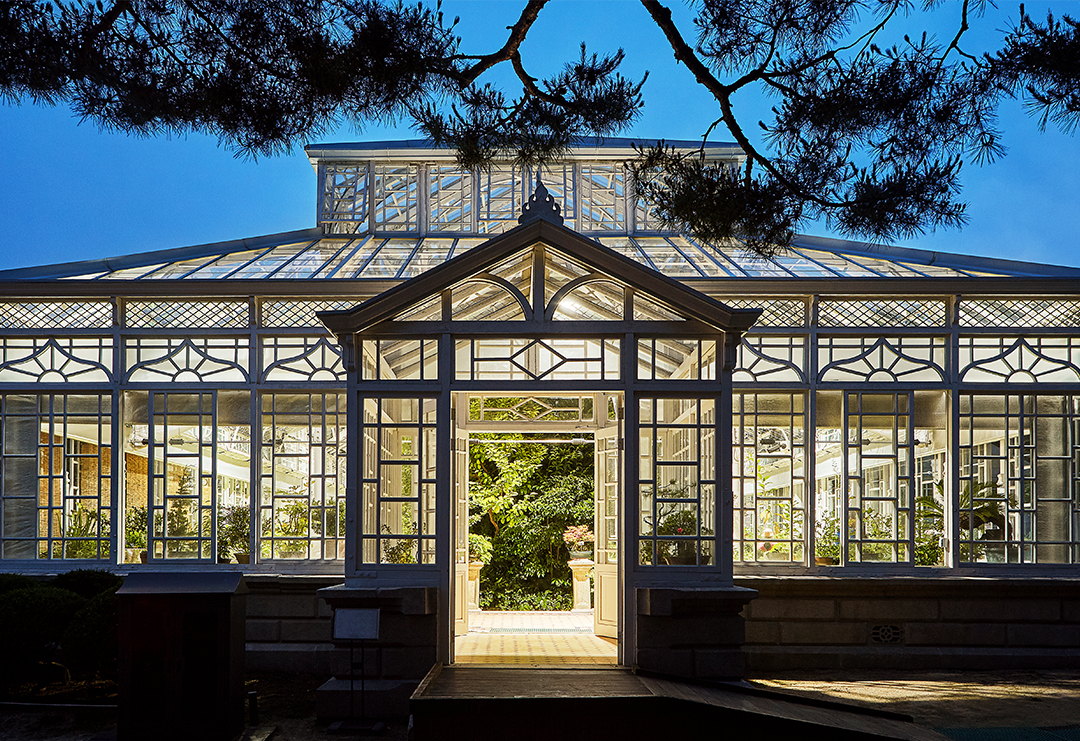 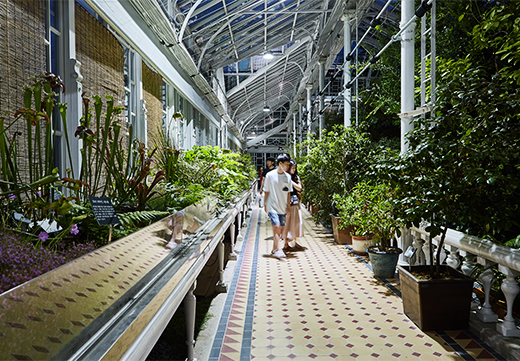 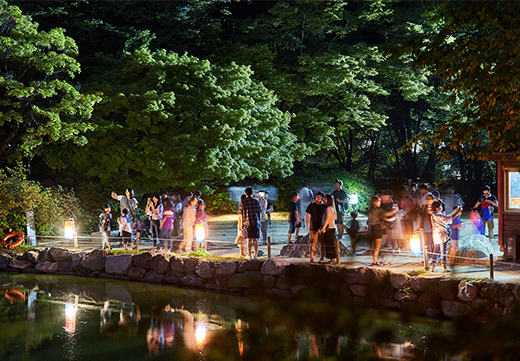 Green Appears Greener at Night
If you walk past Chundangji, the two ponds inside the palace, and move a bit inside, you will reach Korea's very first Western style greenhouse. It opened in 1909, designed by Hayato Fukuba, the chairman of Shinjuku Imperial Garden, and built by a French construction firm. The greenhouse is also open during the evening and night hours. It radiates in green like a lighthouse, and inside, it's a whole different world. At the time of its opening, decorative plants from tropical regions and other rare plants filled the space. Today, it houses Korea's native plants. Some 70 species of plants, such as Changdeokgung juniper and paperplant from Tongyeong's Bijindo. It may not be a large greenhouse, but it's nice to walk in there and see beautiful royal plants there.

With the days having grown longer for the summer, the sun doesn't completely set until after 8 p.m. And shadows of the visitors become natural part of the ground inside the palace. And N Seoul Tower, standing tall and bright in the backdrop beyond Myeongjeongjeon, also blends into the landscape. One hour isn't enough to tour every corner of Changgyeonggung Palace at night. But don't despair, for you can always go back before the end of the summer. 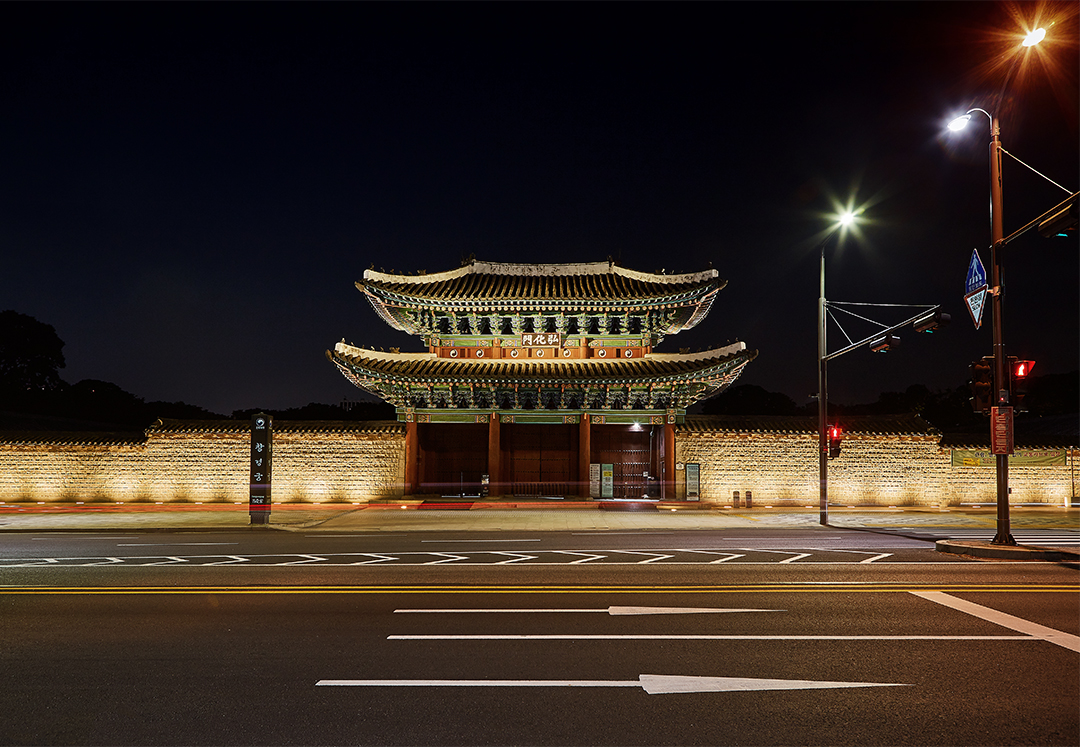