[DAYTRIP] Hanoi Retro City Tour
In Hanoi, time seems to flow slowly. The Vietnamese capital offers a blend of the Oriental and Western nostalgia. Relying on the most primitive form of traveling, we walked through Hanoi to get a closer look at the city's retro landscape.
We all feel nostalgic about a certain period in the past. The film features a horse and carriage that takes people back in time. Gil, the protagonist, is happy to be in Paris in the 1920s, the era he believes was the golden age. But Adriana, whom Gil meets there, wants to live in the Belle Epoque period of the 1890s. But those in the Belle Epoque believe the Renaissance period was truly the heyday of Paris. We're no different today, since we seem to fall in love with anything analogue while living in the digital age.

Though we can't travel back in time in reality, we are able to travel to different places. And sometimes, we can get our nostalgia fix in an unfamiliar city. Hanoi, the capital of Vietnam, offers a mix of the warmth of an Asian traditional market and the vintage atmosphere that once earned Hanoi the moniker, 'Paris of Indochina.' We walked through the heart of Hanoi all day long, and got to see parts of the city that appeal to the nostalgia of the modern people. 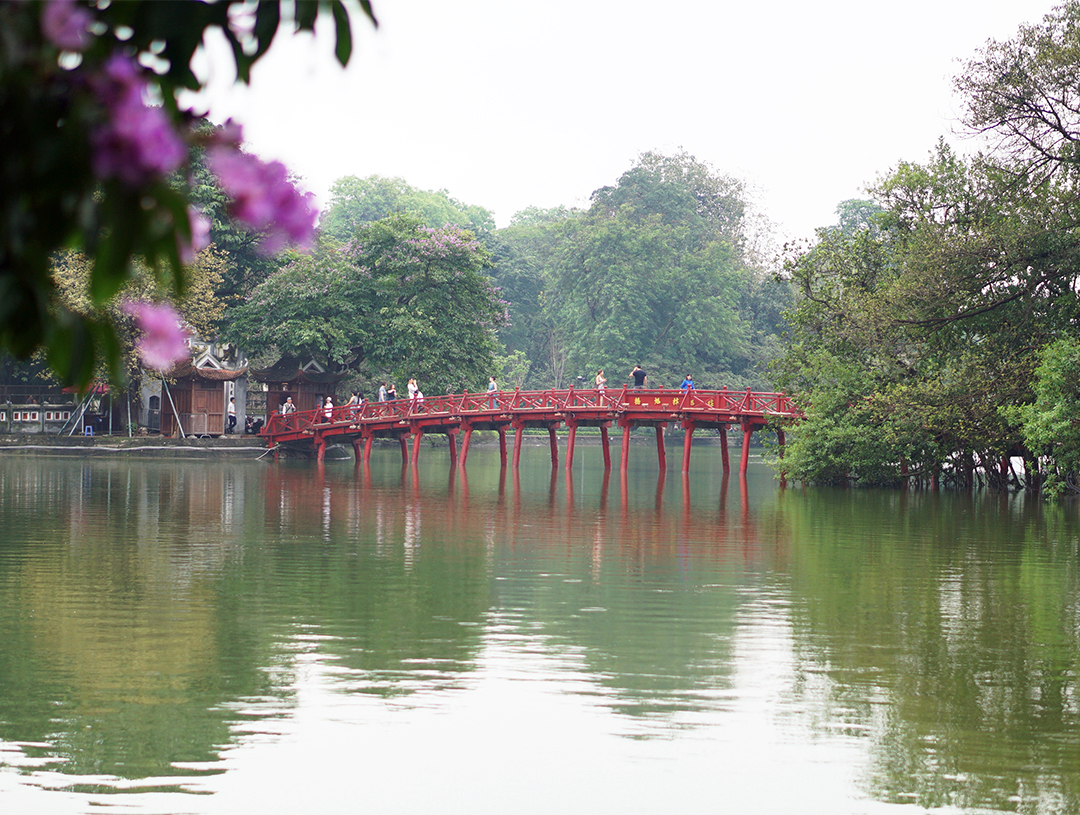 [8AM] Starting the Day along Hoan Kiem Lake
Hoan Kiem Lake is situated in the middle of Hoan Kiem, the largest commercial district in Hanoi, and serves as the romantic oasis in the city. At 97,000㎡, the lake is connected to other tourist attractions in the city and provides a nice getaway for the locals. Even in the early hours, the lakefront is full of people who are out for their morning jogs or badminton matches, who are enjoying some quiet time on benches, and who are sipping Vietnamese coffee with condensed milk at street cafes.

For locals, Hoan Kiem Lake carries an extra significance. A legend has it that in the 15th century, General Le Loi, who later became an emperor, wielded the sword delivered to him by the golden turtle from the lake and defeated Ming China. After saving his country, the general returned the sword back to the turtle, and the lake was named Hoan Kiem, which translates to 'the return of the sword.' Even today, the Turtle Tower standing in the middle of the lake seems to be the guardian of Hanoi. 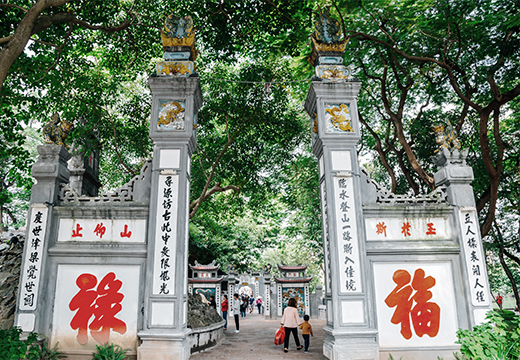 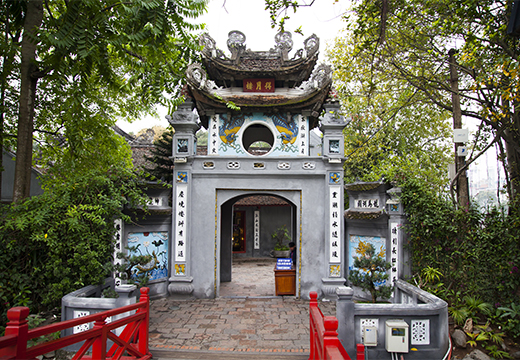 Ngoc Son Temple, built around the 18th or the 19th century, comes into the view to the north of the lake. It serves as a memorial for Tran Hung Dao, who helped fend off the Mongolian forces in the 13th century, and three other national heroes. It's connected to the land by the The Huc bridge, whose name means 'the rising sun.' Though it's not a large temple, it is a signature work of the ancient Vietnamese architecture and adds the antique feel to Hoan Kiem Lake. 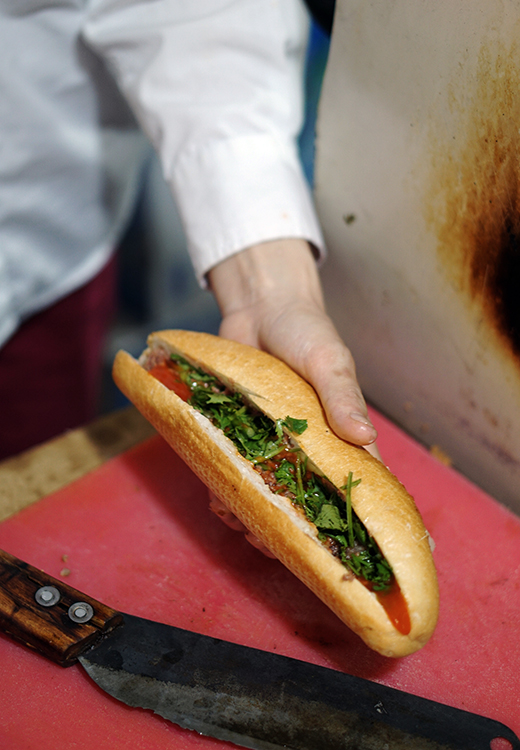 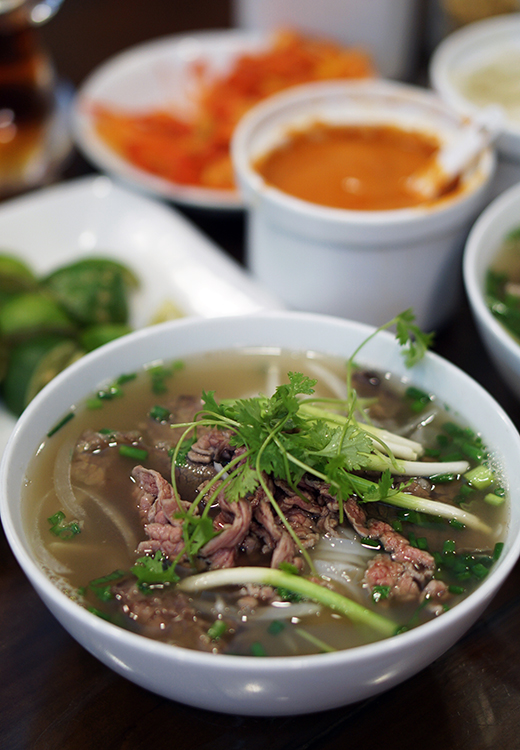 [9AM] Sampling Street Food in Old Quarter
If you walk across the major thoroughfare from the temple, you'll reach the Old Quarter. It first prospered in the 11th century when King Ly Thai To designated Hanoi the capital of Vietnam, with the art district at the center of it. It has been the cultural hub of the city for more than a thousand years. There are 36 streets in the Old Quarter, each lined up with shops selling antique craft pieces. You will see both modern houses and traditional homes with roofs made of palm tree leaves.

Don't miss street food while you're there. Pho, the Vietnamese noodle soup, and banh mi, the Vietnamese sub with pate in baguette, make for delicious breakfast. If you want to enjoy these street delicacies like a pro, you should sit on plastic chairs on the street. And never mind those pedestrians. You'll be taken back to the time when you were eating snacks at an old market. 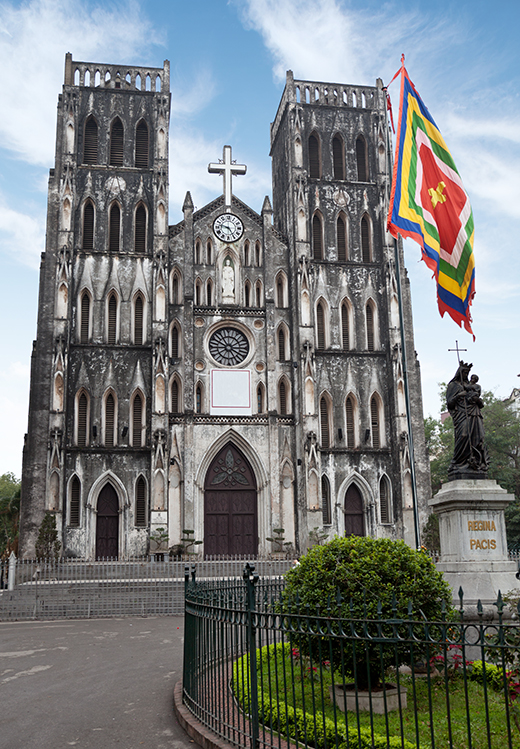 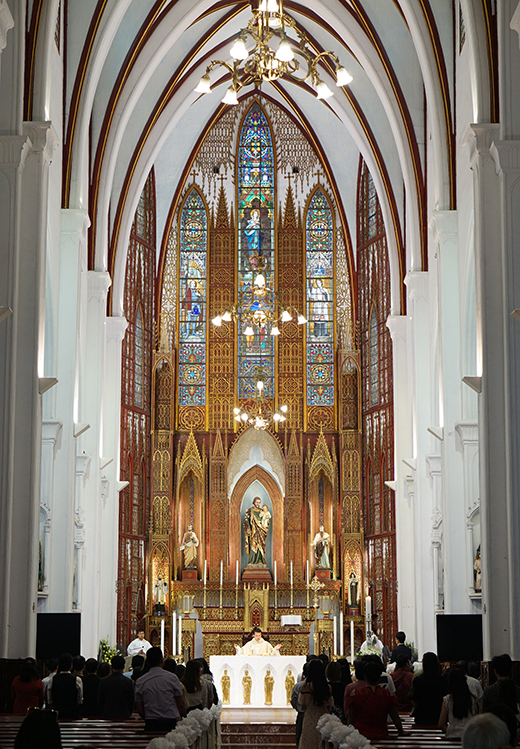 [11AM] St. Joseph's Cathedral and 19th Century Paris
After taking of Hanoi in 1873, France started putting its fingerprints on this city. The French brought down the Bao Thien Pagoda, built during the Ly Dynasty, and erected a Gothic-style catholic church. St. Joseph's Cathedral, called Nha Tho Lon in Vietnamese, was completed in 1886. The facade has two square towers standing at 31 meters, and they've been compared to the towers at Notre Dame de Paris. Beautiful stained glass and pointed arches highlighted the interior. And the worn-down exterior seems to indicate the passage of time, and it's a picture straight out of a Medieval Europe.

Once the colonial period ended in 1954, the locals have come to accept St. Joseph's Cathedral as a part of their own. Today, it serves as the cathedral of the Roman Catholic Archdiocese of Hanoi and holds regular masses. A huge tree is set up during the Christmas season, and it's a popular place for wedding ceremonies on weekends. Elegant boutiques and cafes around the church are popular destinations among young Hanoians. 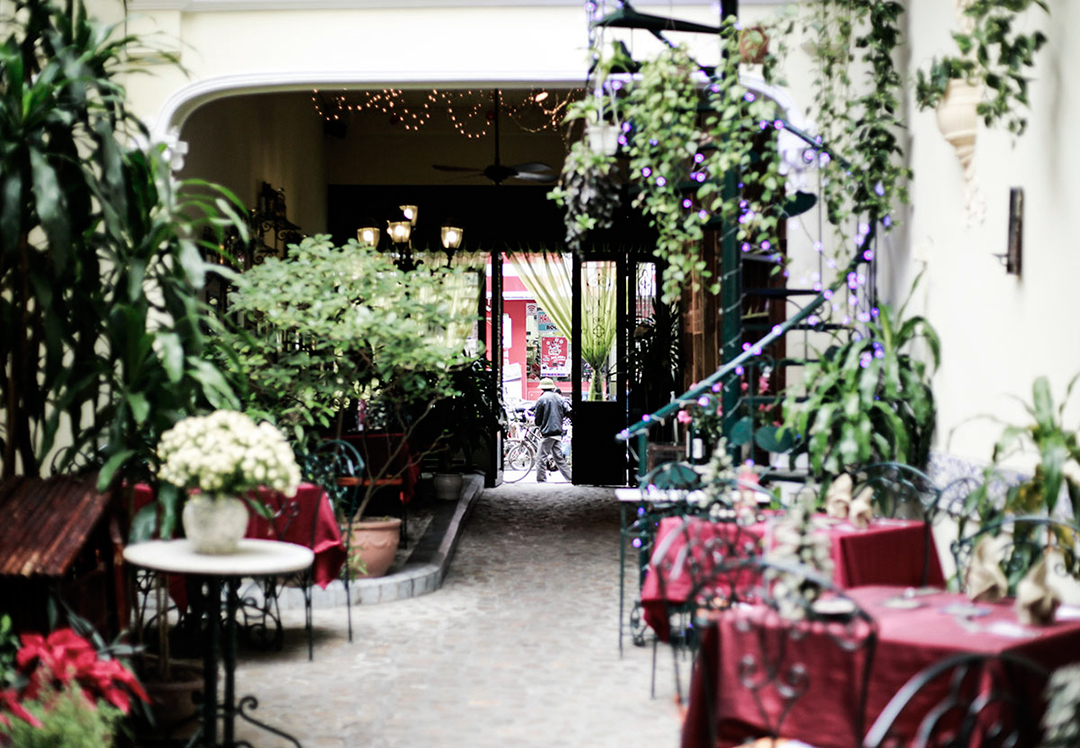 [12PM] Tasting Fusion Cuisine at French Mansion
The antique, European sensibilities that have become very much a part of the city's identity have also influenced its dining culture. Green Tangerine, a fusion restaurant housed in a French villa, is a prime example. The restaurant is located on a corner of the street that exudes down-to-earth atmosphere, but once you get past the entrance, you'll see a chic, garden-style dining place. Built in 1928, the mansion holds elegant tables inside. Tourists from all over the world come here for creative French haute cuisine with a touch of local flavors. 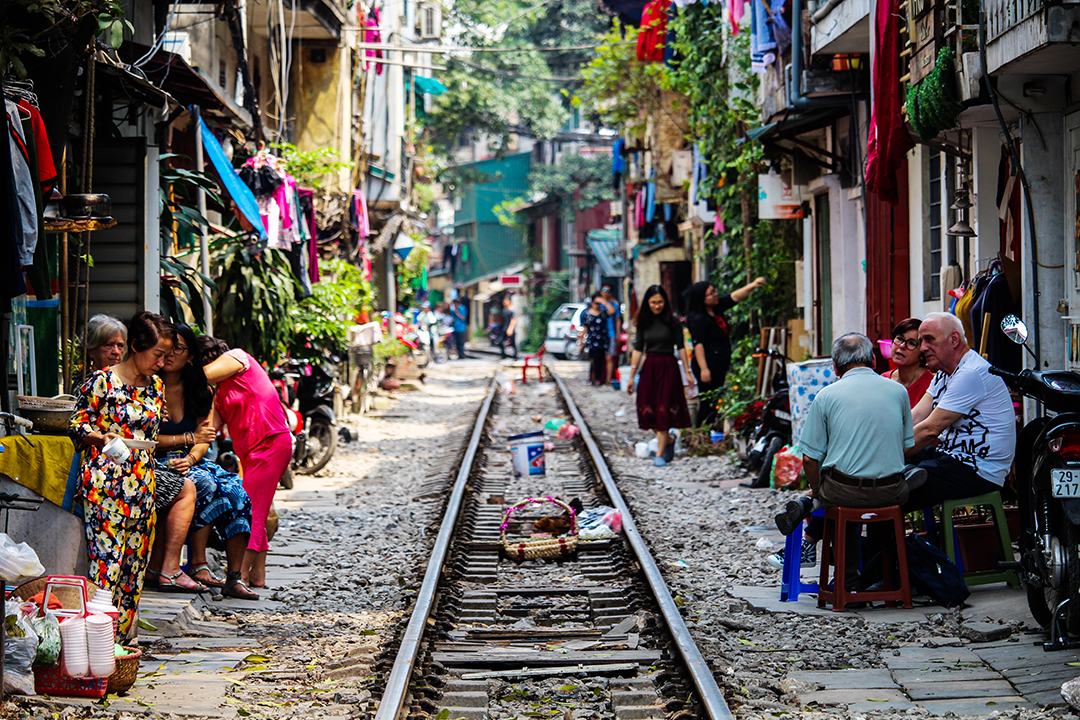 [2PM] From Railway Village to Long Bien Bridge, Stroll Along Railways
During its colonial period that lasted for about 70 years, the French didn't just erect European-style buildings. They completely overhauled the city. Using the modern-style straight roads and grid patterns, they gave Hanoi an entirely new look, and also installed the railways that cut through Vietnam.

A small village has been formed along the tracks connecting Ga Ha Noi and Ga Long Bien, built in 1902. Their homes are almost at an arm's length from either side of the railroad. Clothes are hung on the laundry line outside their windows and children play on the gravel bed. Trains move past the village twice a day during the week and six times a day during the weekends. When the horn goes off from the distance, the residents pick up their things from around the tracks and move away from danger. And once the train passes through, then the life returns to its normal rhythm. The area used to be a slum, but it has become a tourist attraction after word of mouth traveled about the exotic landscape. 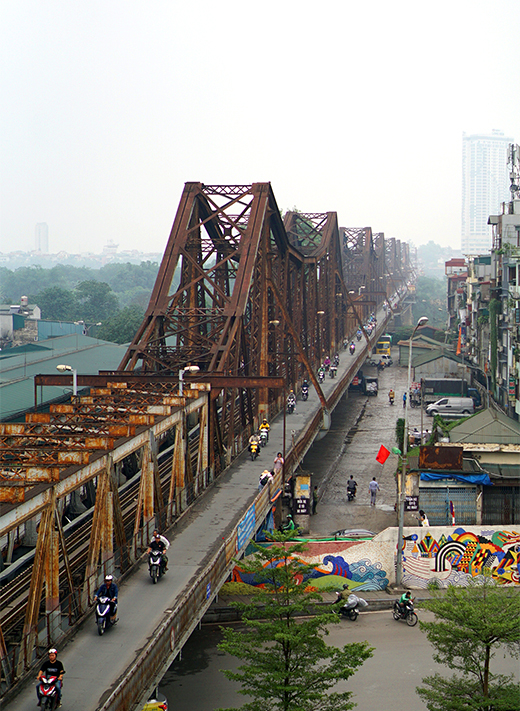 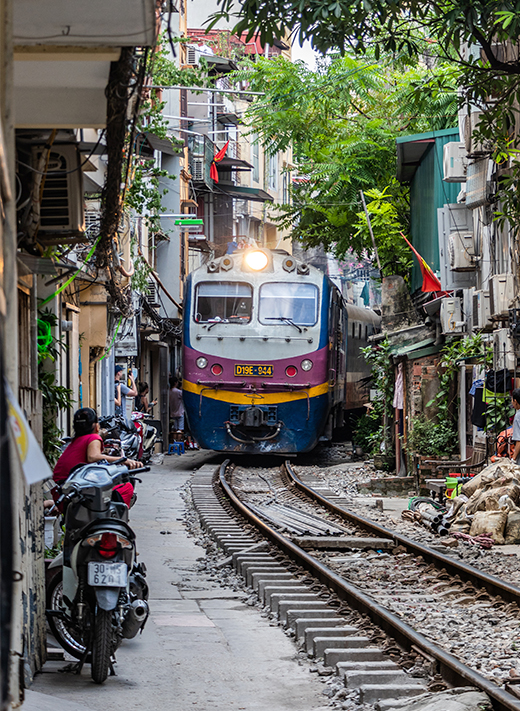 Walk for about 20 minutes along the tracks, and you'll reach Long Bien Bridge. It is said to have been designed by Gustave Eiffel, of Eiffel Tower fame, and the construction required some 3,000 workforce from 1899 to 1902. At the time of its opening, it was the first iron bridge in Vietnam and the longest one in Asia. It was bombed multiple times during the Vietnam War but has retained its original form. The rusted rebar and the shaking of the bridge when you're walking across may make you feel dizzy. But it's a bridge of historic significance with some vintage feel to it. 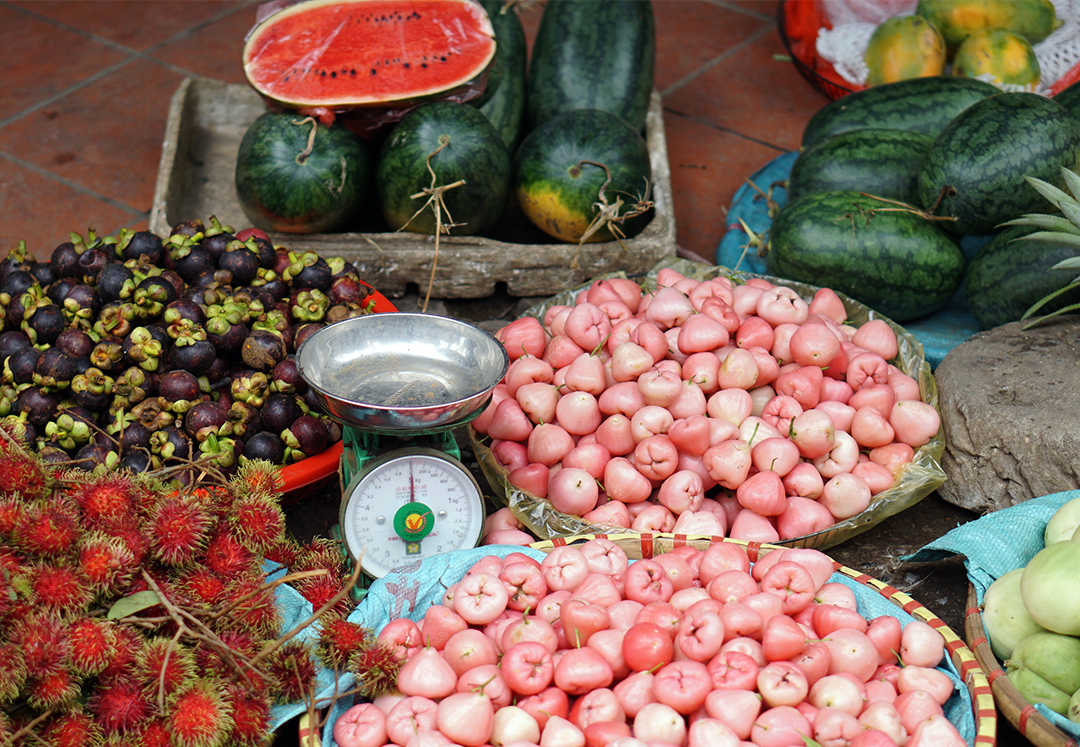 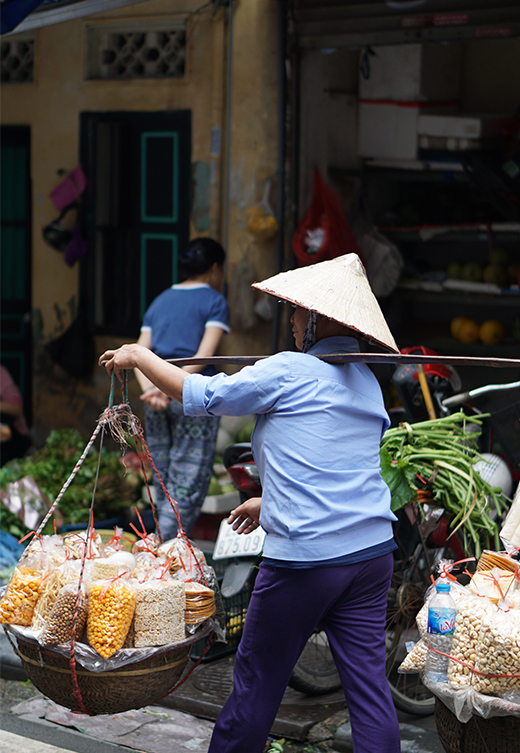 [3PM] Market Tour and Cooking Class Taking You Into Local Life
Experiencing the local culture can help tourists overcome limits of information and communication. In the culinary paradise that is Vietnam, cooking classes are popular. The program offered by Rose Kitchen doesn't just teach you how to make dishes; you'll get to shop for ingredients at old markets that other tourists may miss, and cook and party at a local house.

You'll see the unfiltered side of Hanoi in these markets, with the cacophony of screaming merchants and crowing chickens, colorful fruits and vegetables scattered about on the ground, and smell of frying from somewhere. They all help take you back in time to a period that you thought you forgot. Merchants are decked out in the traditional headgear called Non, and put fruits and vegetables on their backs in a bamboo carrier. Instructors tell you how to pick out ingredients and help translate for tourists. 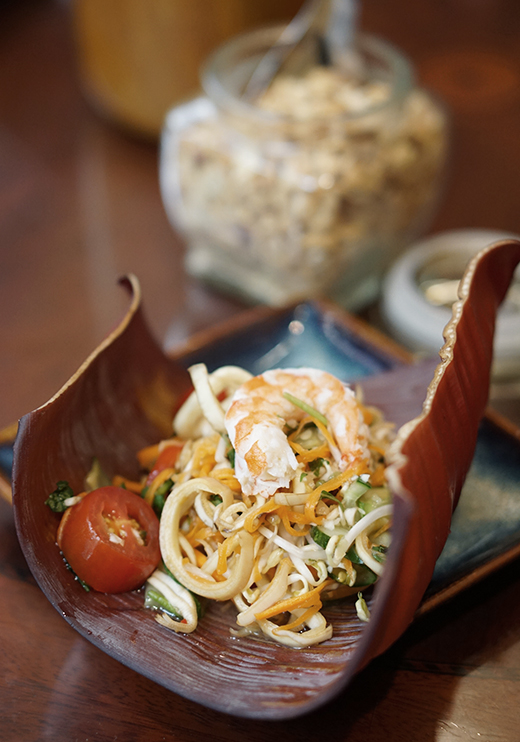 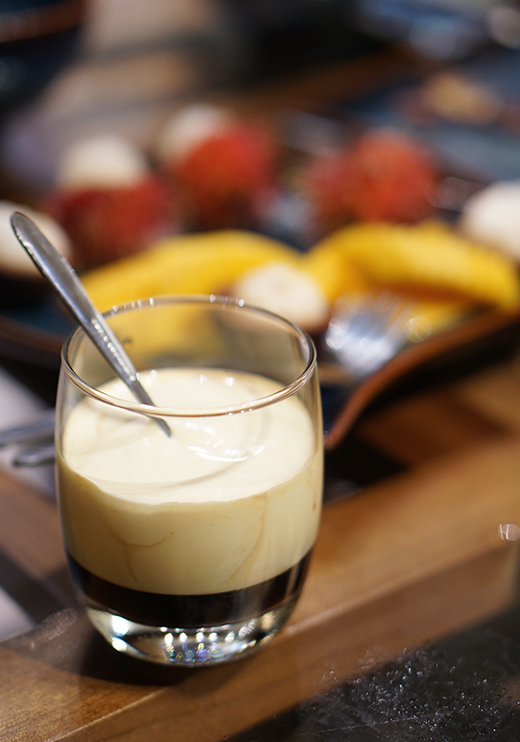 When it's all set, cooking begins at a bucolic home. Tourists fumble their way through for banana blossom salad, spring rolls and bun cha, a dish of noodle accompanied by grilled pork. Don't forget Hanoi-style egg coffee, topped with cream made of egg yolk, condensed milk and sugar. Enjoy the Vietnamese food that you've prepared yourself, and you'll feel like one of them. 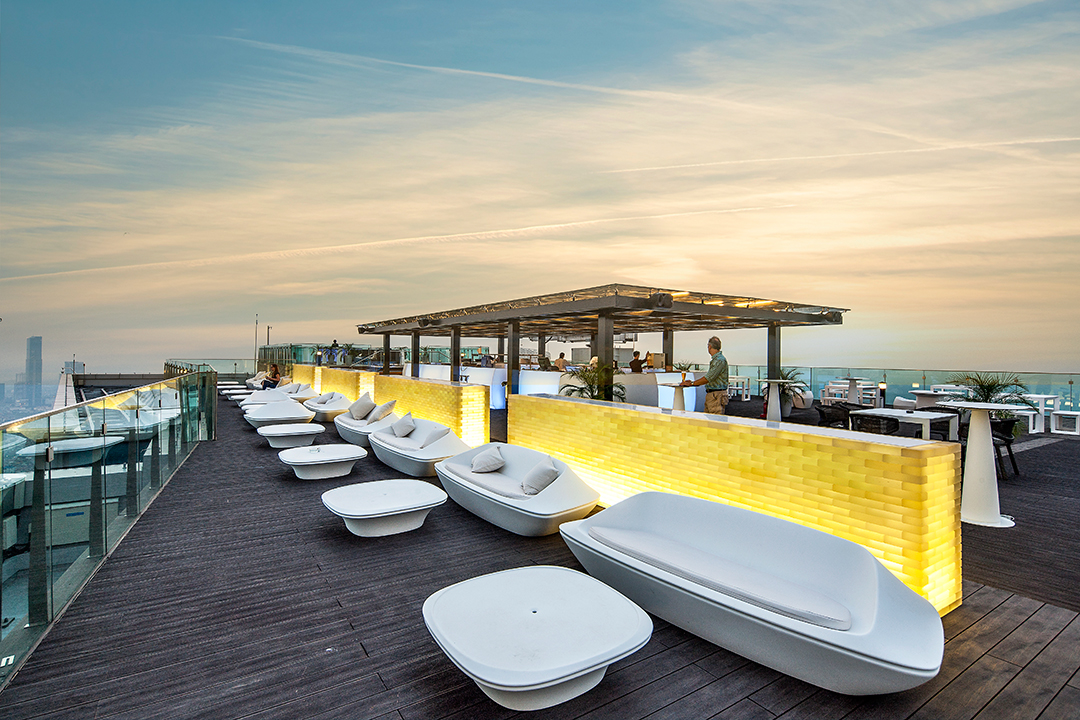 [8PM] Top of Hanoi
Just as characters in return to the present after time travel, you can head to 'Top of Hanoi,' the most contemporary place in Hanoi, after wrapping up your retro tour of the city. It's the highest roof-top bar in Hanoi, and with a cocktail in your hand, you can try to trace places that you've covered during the day. And the skyline, which becomes more beautiful it gets closer to the sunset, will show you Hanoi isn't just a city stuck in the past. The city has gone through dynasties, French colonial rule, war and unification, and it has embraced all sorts of cultural heritage from these eras as it has evolved. Hanoi may just be more future-oriented than any other city in the world. 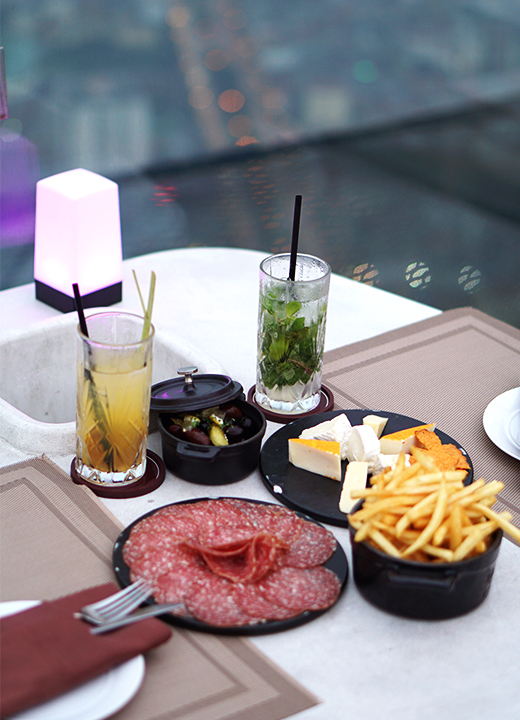 You can head to ‘Top of Hanoi,’ the most contemporary place in Hanoi, after wrapping up your retro tour of the city. It’s the highest roof-top bar in Hanoi, and with cocktail in your hand, you can try to trace places that you’ve covered during the day. 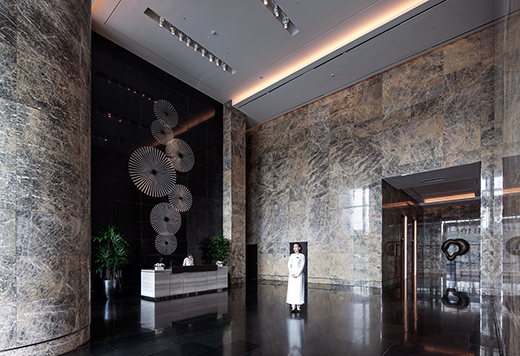 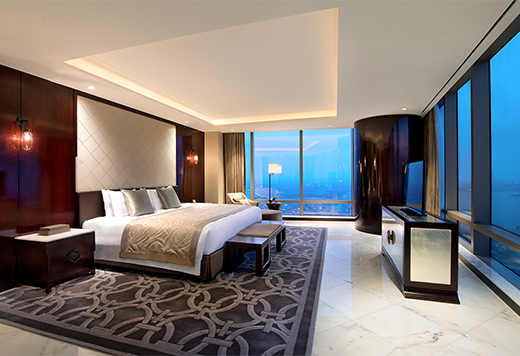 Where to Stay in Hanoi: LOTTE HOTEL HANOI
LOTTE HOTEL HANOI occupies the upper portion of the 65-story landmark, Lotte Center Hanoi. It offers a spectacular view of the whole city. The interior of the guest rooms was inspired by the traditional Vietnamese patterns. Top of Hanoi and Evian@Spa are among high-end facilities that fill various needs of guests.