Going Surfing in Yangyang
During summertime in Korea, Yangyang in Gangwon Province bustles with surfers. We want to introduce you to Yangyang’s top six surf spots. Don’t be afraid of experiencing new oceans and waves or mingling with new people. One of the surefire ways to enjoy surfing is to explore new surf spots.
Once you arrive in Yangyang, research the conditions of three to four surf spots above all. Depending on the direction and size of the waves that have traveled across the Pacific, each surf spot presents slightly different wave patterns. Surfers also have to check the winds, tides, and tidal currents. The forecast of high-quality waves would lead to small commotions on the beach as surfers would come out in their cars, motorcycles, or bicycles to see the water condition. They also text each other to share the latest reports. Online surf magazine "WSB FARM" updates real-time video feeds of the waves at popular surf spots around Korea using local webcams.
There are roughly two criteria that surfers use to determine the daily surf spot. One is the quality of waves. To qualify as a good one, surfing wise, a set of waves must have a desirable size, level of energy and intervals. These waves would appear beautiful even to the eyes of non-surfers. If you are lucky, you can catch high swells at sea in the early morning. Seconds before the waves break, you will feel like time is standing still. Then slowly and gently, they disperse. Jukdo Beach seen from the mountain

The other criterion is the crowd. Surf spots with high-quality waves are inevitably crowded. With the recent popularity of surfing as a recreational activity, more and more people are visiting Yangyang. To be blunt, too many surfers means no fun in surfing. You will often feel pressured to give up a good swell to a fellow surfer. There is also a greater chance of collision. Finding parking will be challenging as well. In the end, your surfing trip may not be what you’d been dreaming of. So it’s a dilemma for many surfers to choose between the quality of waves and the crowd. Personally, I would prioritize a quiet surf spot even if the waves are not that great.
I went to Yangyang last weekend. Viewing from Jukdo Beach, I saw hundreds of surfers floating on the ocean. The water temperature changes more slowly than the atmosphere. Being early June, the water was still cold, having a similar condition to that of early spring, and surfers had to wear a thick wetsuit despite bulkiness. That said, there were more people in Yangyang than I had expected. Jukdo Beach is especially popular among surfers. It is what makes the popularity of surfing amazing yet regrettable in some sense. Great surf spots of Korea are scattered around not just Yangyang, but the entire East Sea coastline. In fact, the three oceans of the Korean Peninsula could be surfed. Surf shops, helping surfers with safety and convenience, are available in all surf spots. We want to introduce you to Yangyang’s top six surf spots. Don’t be afraid of experiencing new oceans and waves or mingling with new people. One of the surefire ways to enjoy surfing is to explore new surf spots. 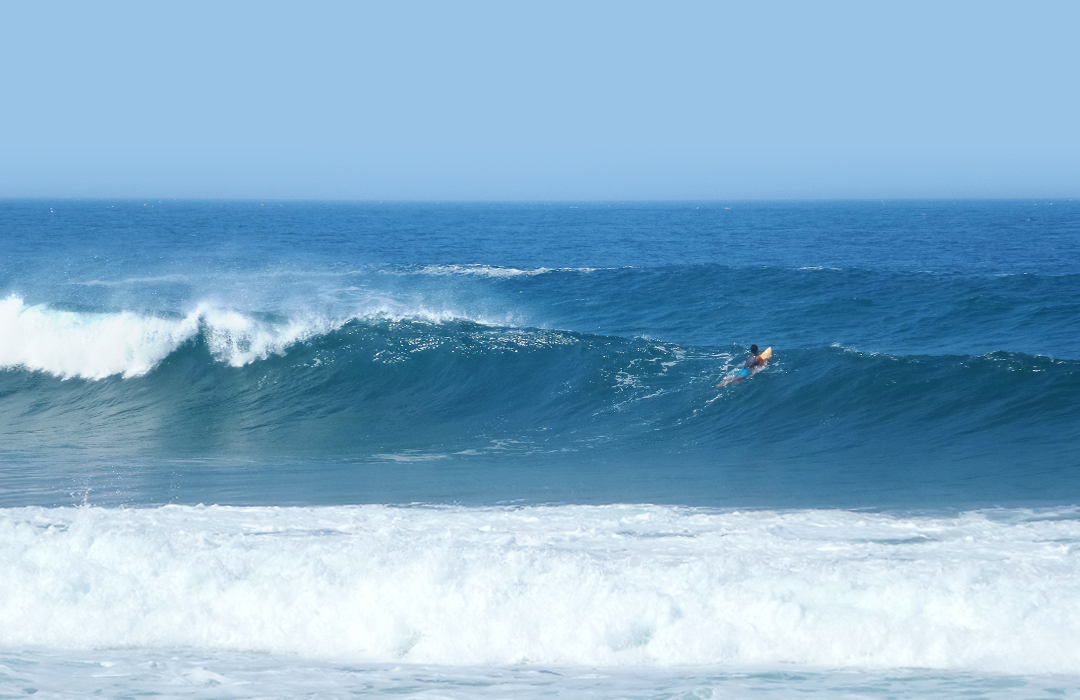 1. Namae 3-ri
It used to be a secret surf spot between surfing fans only years ago. As surf shops started opening, the beach has become known in the surfing community. The shallowness of the sea makes smaller waves surfable. It presents great curls (the area of the wave where it is breaking), attracting shortboarders. As Jukdo Beach and Ingu Beach are more famous and crowded, experienced surfers often go to Namae 3-ri Beach.
Recommended surf shop Palbong Surf & House (19 Annamae-gil, Hyeonnam-myeon, Yangyang, Gangwon-do, +82-33-671-4888) 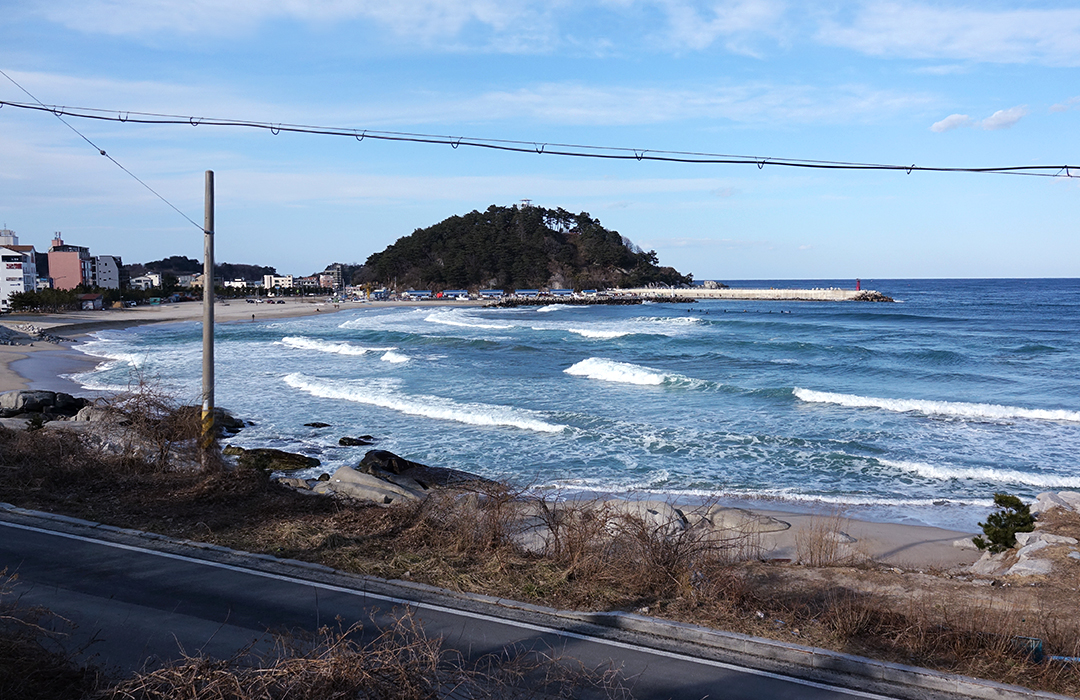 2. Ingu
The beach does not stretch far out, but the left, center, and right part of the coast offer peaks (the highest point of a breaking wave). Many surfers visiting Yangyang first check out Jukdo Beach and then move to Ingu Beach. In close proximity to Jukdo Beach, Ingu Beach sees big swells from time to time. The beach is approachable by car, making it a haven for campers. The sand bank is slightly more elevated than the sea, which means it is great for watching surfriding. It is a cozy beach that is not too big, not too small.
Recommended surf shop Surfari (28-15 Ingu-gil, Hyeonnam-myeon, Yangyang, Gangwon-do, +82-33-673-1455) 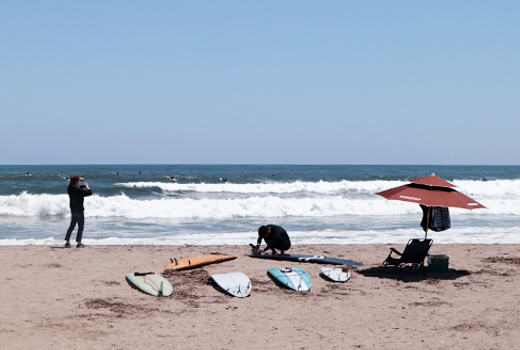 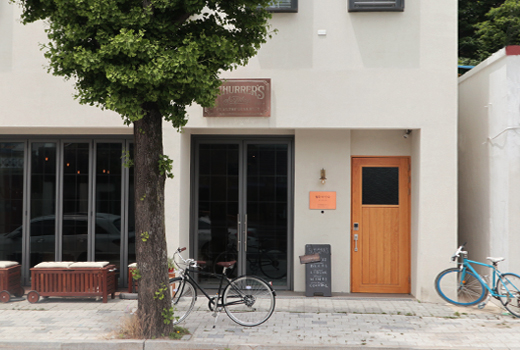 3. Jukdo
Jukdo Beach is the surfing mecca of Korea. In the last five years or so, the coastal area has gone through transformation. Surf-themed pensions, cafes and bars have opened, and dozens of surf shops are in business now. With the influx of younger population, the once-quiet town has revived. People say the nearby elementary school has now several times more students than they used to. Jukdo Beach has a long stretch of coastline and several peaks along it. Even on a slightly crowded day, surfers can still find space to ride the waves. However, weekends are a different story. Hundreds of surfers await the waves at sea. There are also quite a few beginner surfers training on the beach. You can’t help but mind other surfers, and collisions happen frequently. It’s worth visiting on a weekday though. Personally I like to surf here in the early morning or right before sunset.
Recommended surf shop Tyler’s Longboard Shop (65 Ingujungang-gil, Hyeonnam-myeon, Yangyang, Gangwon-do, +82-33-672-8993) 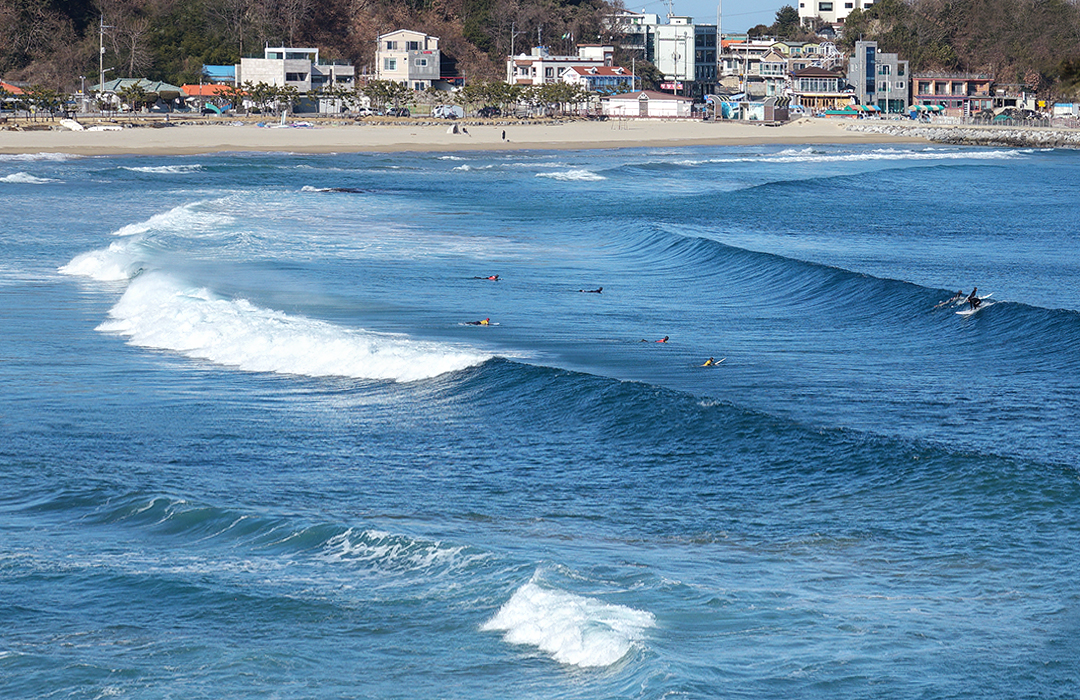 4. Gisamun
Gisamun Beach is where surfing on the eastern coast began in Korea. About a decade ago, surfers who were part of a surfing club found this surf spot, the first of many to sprout along the eastern coastline. Here, the waves are powerful and the beach does not stretch far enough to accommodate multiple surfers at the same time. Looking out to the sea from the beach, there’s a red lighthouse to your left, and an islet to your right. It’s a scenic beach. The 38th Parallel rest area is at the entrance of the beach, which is second to Jukdo Beach in popularity among Yangyang beaches.
Recommended surf shop Nangman Beach Surfing School (1242 Donghae-daero, Hyeonbuk-myeon, Yangyang, Gangwon-do, +82-10-2802-9918)

“The Winter Surf 1”, a short film about the beauty of winter surfing in Korea and those who travel to enjoy the winter sea in the country, was shot in Korea in the winter of 2014. © www.donggikim.com

5. Dongho
Dongho Beach is known for its sensitivity to smaller waves. The spread-out, clean beach and the sea attract summer vacations in the busy season. There are only two surf shops in this area. Relatively unknown, the beach is great for surfing peacefully even on weekends. The first surf shop to open on Dongho Beach is Surf Club Jetcity. Interestingly, this place is also famous for selling delicious fried chicken. Surfing is a vigorous activity. The combination of fried chicken and beer while enjoying the ocean view can give you a perfect finish to your surfing trip. Dongho Beach is the closest from the Hajodae Interchange off the Seoul-Yangyang Expressway.
Recommended surf shop Surf Club Jetcity (316-20 Seonsayujeok-ro, Sonyang-myeon, Yangyang, Gangwon-do, +82-70-4411-6789) 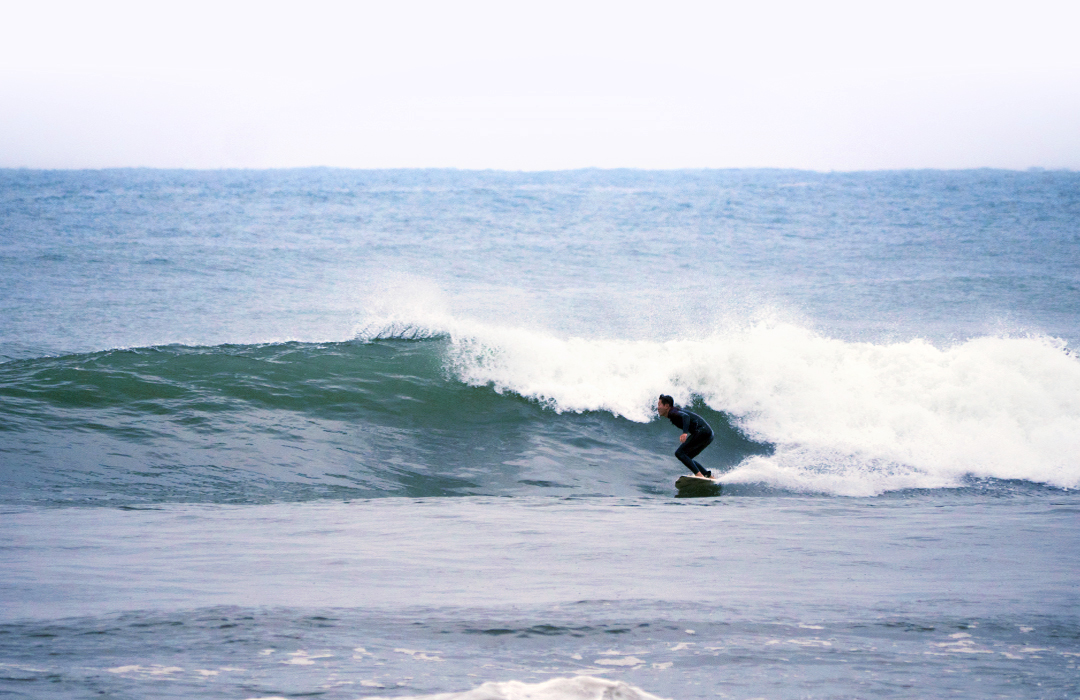 6. Mulchi
So far we’ve looked at surf spots in the order of distance to Yangyang. Mulchi Beach is located around the border of Yangyang and Sokcho, only 4 kilometers to LOTTE RESORT SOKCHO. The biggest feature of Mulchi Beach is the fact that it becomes the best surf spot when there is a big swell. The waves here are not too powerful either, allowing for an easy riding experience. Due to these characteristics, the beach is frequented by longboarders. There are a couple of recently-opened surf shops. If you find the waves at Mulchi Beach too small, you can check out Seorak Beach nearby.
Recommended surf shop Honey Surf (11 Mulchi 1-gil, Ganghyeon-myeon, Yangyang, Gangwon-do, +82-33-672-6139)