Discover your eternity in eastern Tibet
Eastern Tibet is the real Tibet. It’s where disciplinants, who have spent years practicing asceticism, travel to discover their eternity.
Kham in eastern Tibet and Sichuan
Tibetan people live in the southwestern part of China. The Tibetan autonomous region includes Amdo in Qinghai, Kham — which spreads into Sichuan — and Lhasa, the heart of Tibet.
Kham, which is kown as eastern Tibet, means pure and beautiful. It is found in Sichuan Province and its official name is Garze Tibetan Autonomous Prefecture. The autonomous prefecture takes up half of Sichuan Province, which is five times the size of South Korea. To reach eastern Tibet, travelers normally head from Chendu in Sichuan. 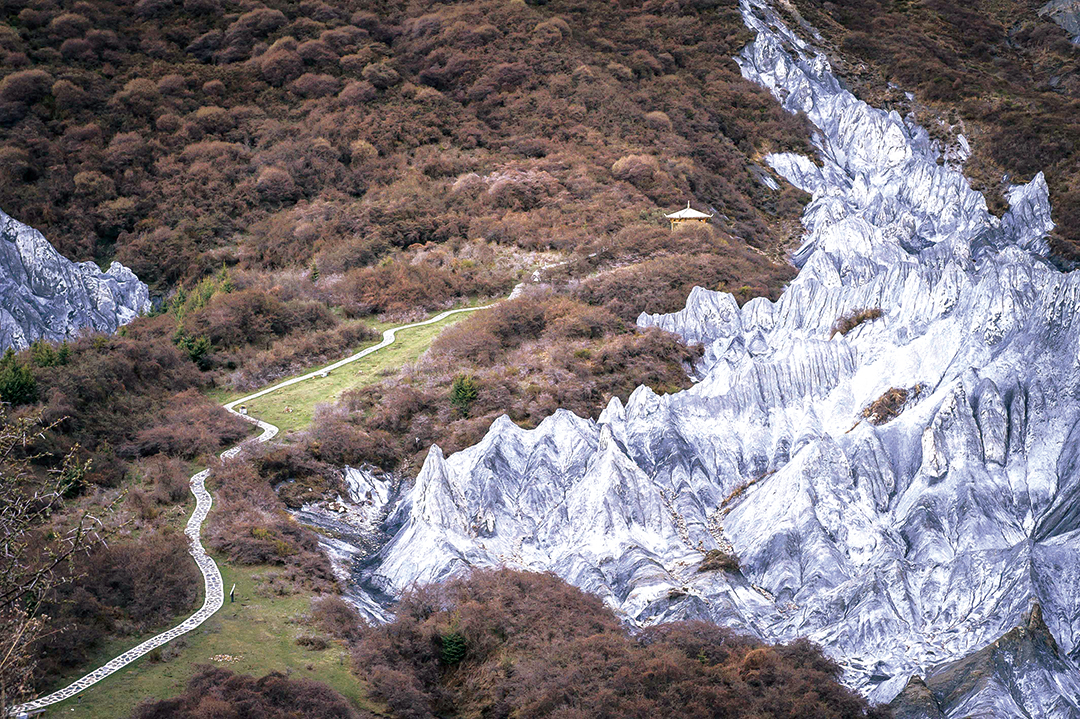 James Hilton’s 1933 novel “Lost Horizon” describes the mythical Shangri La as a place where live peacefully in a grassland surrounded by snow-covered mountains. The people that live there have discovered the secret of eternal youth and have a seemingly never-ending supply of gold and grain. Could this Shangri La be in eastern Tibet?
Travelers normally plan their route based on how much time they have. If you have time to spare, you can drive seven hours through Siguniangshan. Travelers on a tighter schedule can take an hour-long flight to Kangding Airport, but arriving by plane does have its difficulties. As the airport is 4,200 meters above sea level, altitude sickness can be a serious issue if you arrive by plane. Driving may take longer, but it allows the body to slowly acclimatize to the altitude. Neither route is particularly easy — the choice is between an uncomfortable drive or the potential for altitude sickness. 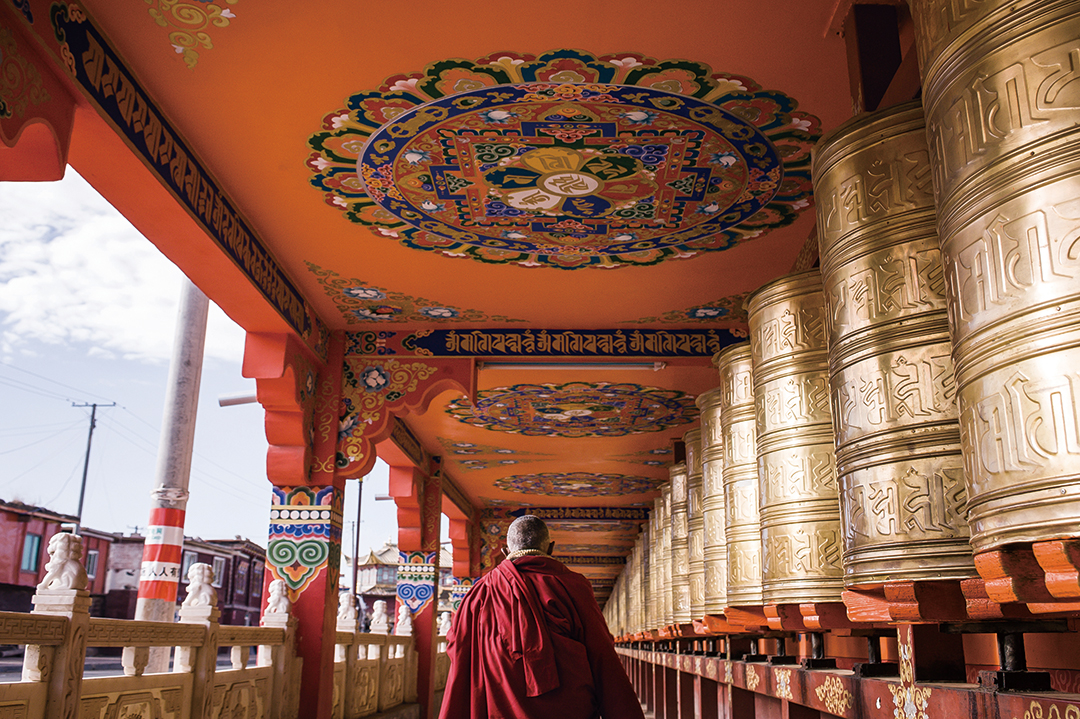 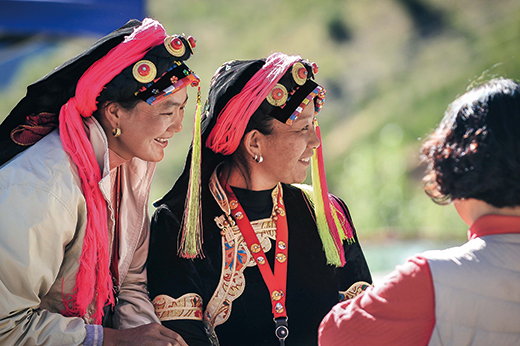 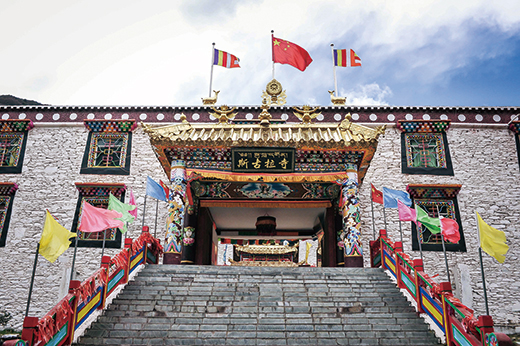 Tibet, the best place to truly embrace Buddhist asceticism
When travelers are asked about the most memorable places they visited in eastern Tibet, the answer is often Yarchen Gar and Larung Gar Buddhist Academy.
Yarchen Gar is located in Baiyu County in Sichuan Province’s Garze Tibetan Autonomous Prefecture. The temple is famous as one of the foremost sights of the Nyingma school of Tibetan Buddhism, and used to be home to one of the seniormost masters of the order. Buddhist monks and devotees travel to the isolated temple in a valley deep in the mountains at 4,000 meters above sea level, with as many as 10,000 people gathering to practice asceticism at any one time. Of the 10,000, an average 60 percent are female. Ascetics train for anywhere between three months and three years at the temple.
Yarchen Gar is not only a holy place for Tibetan Buddhism, but it is also one of the places where the Chinese government permits outsiders to practice and study asceticism. The temple was built by Achuk Rinpoche and later a small city-like temple complex sprung up around the original site as more monks from the Tibet traveled to learn from him. 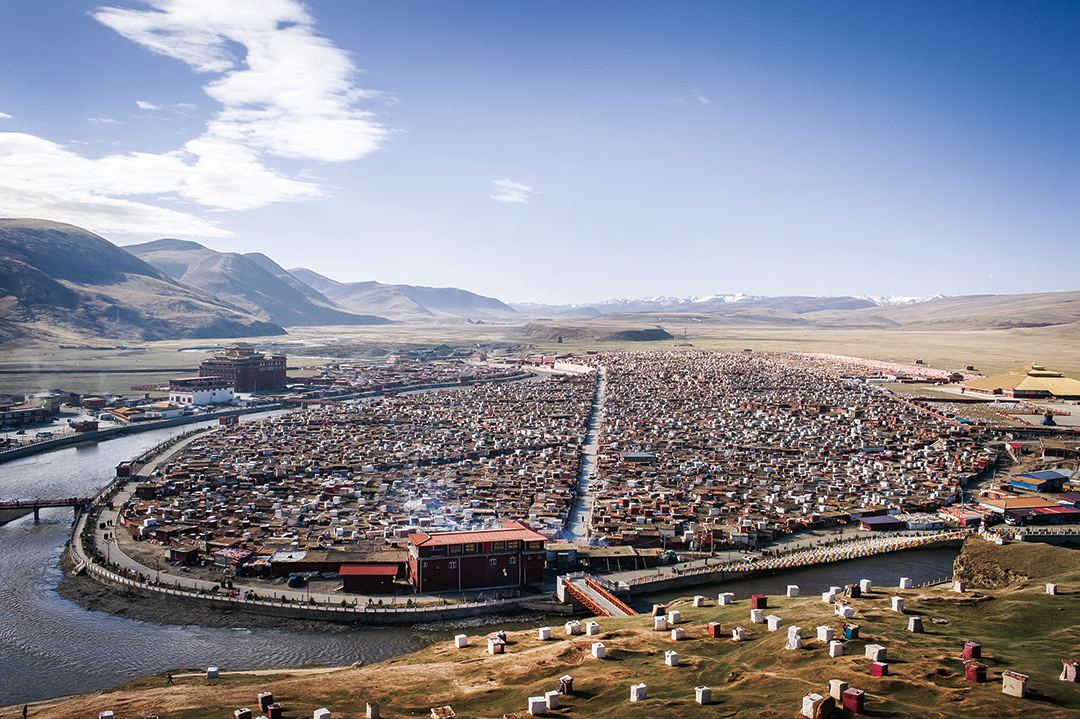 View of Yarchen Gar with Yalong River flowing around it 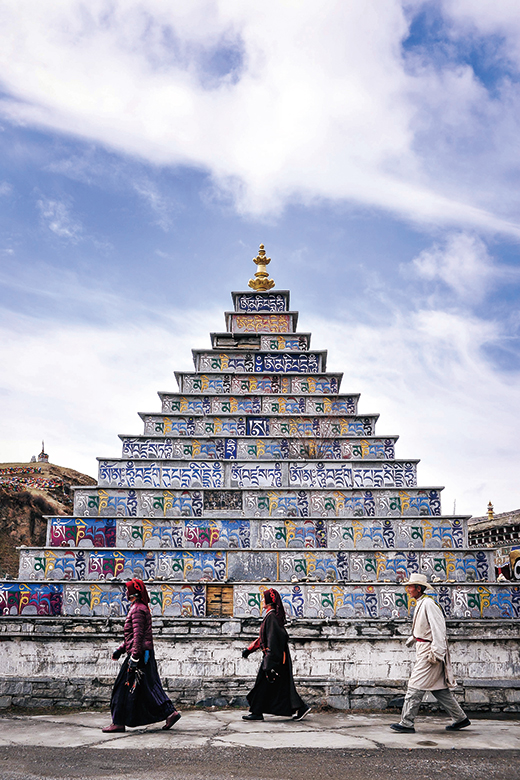 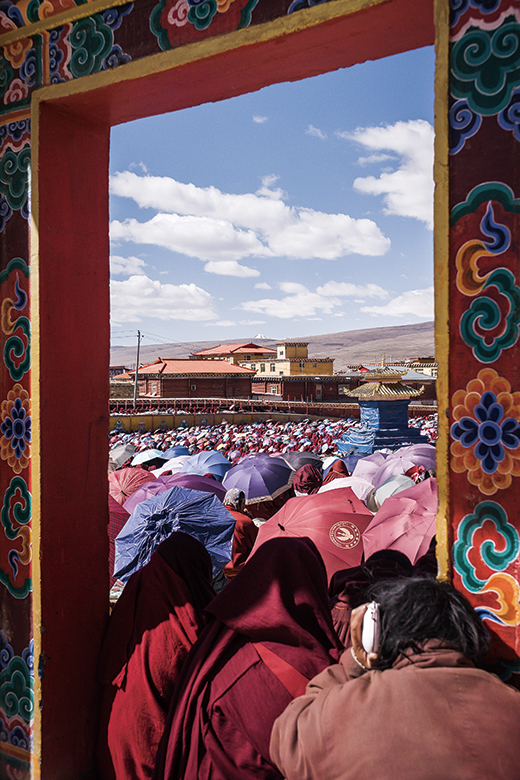 Asceticism at one with the wind
One of the reasons behind the popularity of Yarchen Gar are the shacks built in a small space on a bend in the Yalong River. Viewed from a distance, this cluster of shacks looks like an island of tranquility.
As drinking, smoking and eating meat are prohibited at Yarchen Gar, ascetics are able to fully concentrate on their meditation and can be seen throughout the complex. Sitting cross-legged on the slopes of the Yalong River, ascetics meditate and practice.
Over the river, hills and bridges Buddhist prayer flags can be seen flying. Buddhists believe that the wind passing over the prayer flags reads the scripture written on them. Practitioners who get hit by that same wind are also, in a way, believed to be reading those scriptures through the wind.
Also at the temple, you can see people spinning prayer wheels. Prayer wheels are cylindrical wheels on a spindle made of metal, wood and stone that normally has the six-syllable Sanskrit mantra Om Mani Padme Hum written on it. Locals believe that every time you spin the prayer wheel, it is the same as reading scripture. 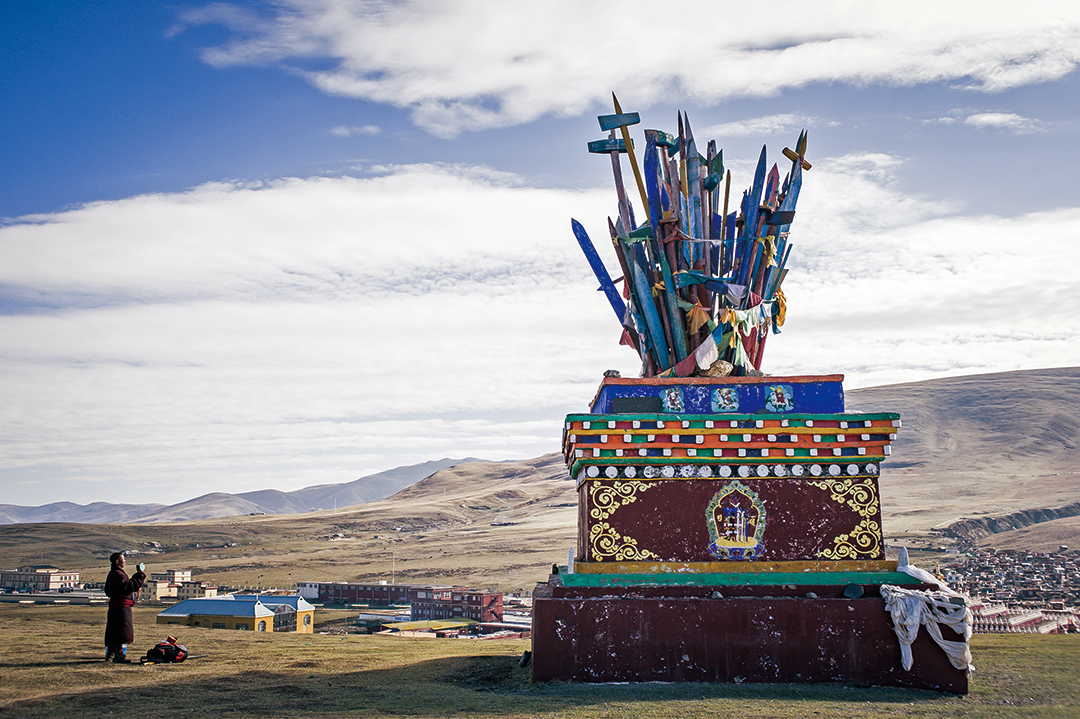 “I asked the van driver for the name of this snow-covered mountain that has thousands of meters of altitude and his answer was broad-minded. His response was, ‘what about the name…it’s only a mountain.’ As I listened to his response, it made sense and I nodded to his answer, as the mountains surrounding his neighborhood would all look like that.”
Photographer Kim Zun’s Eastern Tibet travelog 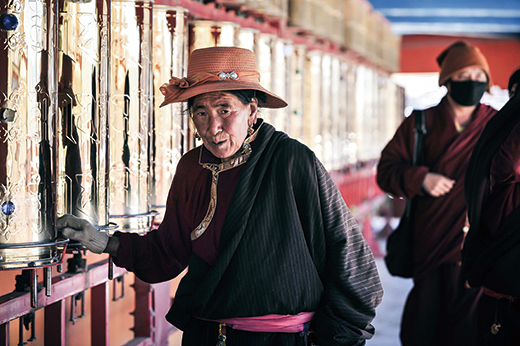 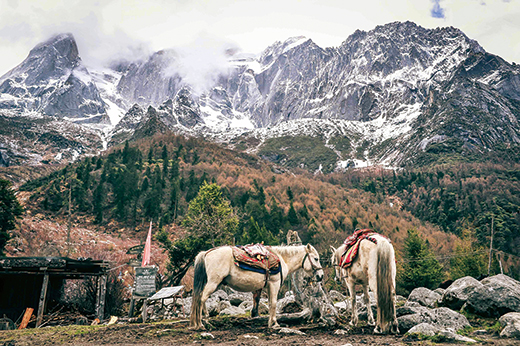 View of Eastern Tibet, at 2,000m above sea level 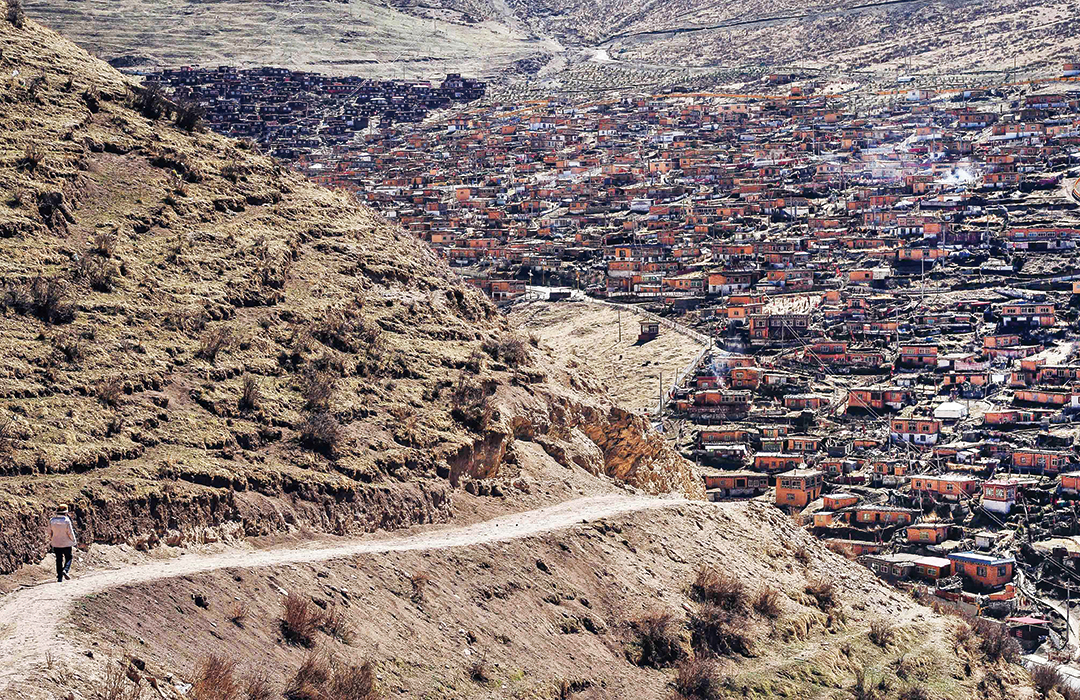 Larung Gar Buddhist Academy, an enormous community for practice
Larung Gar Buddhist Academy is the world’s largest Tibetan Buddhist Academy. Just like Yarchen Gar, it is located in the Garze Tibetan Autonomous Prefecture, but Larung Gar is located in Sertar County.
Sertar County is located in the highlands between Sichuan Province and Qinghai Province. Starting with 32 disciples, Larung Gar now houses about 40,000 practitioners, making it the largest Buddhist academy in the world. Practitioners build their own shacks to stay in, with tens of thousands little residences now surrounding the temple complex.
The academy allows practitioners to set their own curriculum. There are education programs for children and courses that allow vistors to get a taste for the ascetic experience. One of the reasons travelers visit Larung Gar is to visit the unique funeral rites held there, known as the sky burial. When a person dies, tradition dictates that their body is left out for the local birds of prey, like eagles. This practice may seem cruel to outsiders, but to the devotees of the temple, it represents a return to nature that is true to Tibetan Buddhist principles. 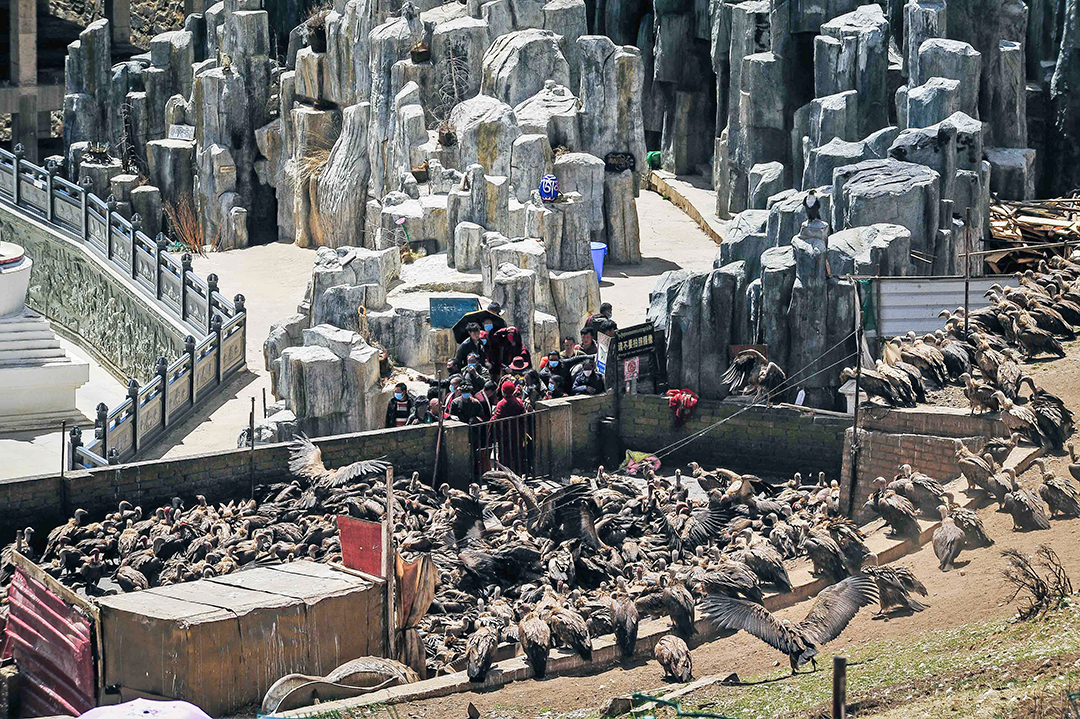 A flock of eagles gathered ahead of the sky burial

“The sky burial is a Tibetan funeral ceremony and the feeling of discomfort is from the viewpoint of the third party or the observers. A sky burial is a traditional ceremony, legally protected by the Chinese government. Photos cannot be taken and eagles should not be harmed.”
Information regarding sky burial 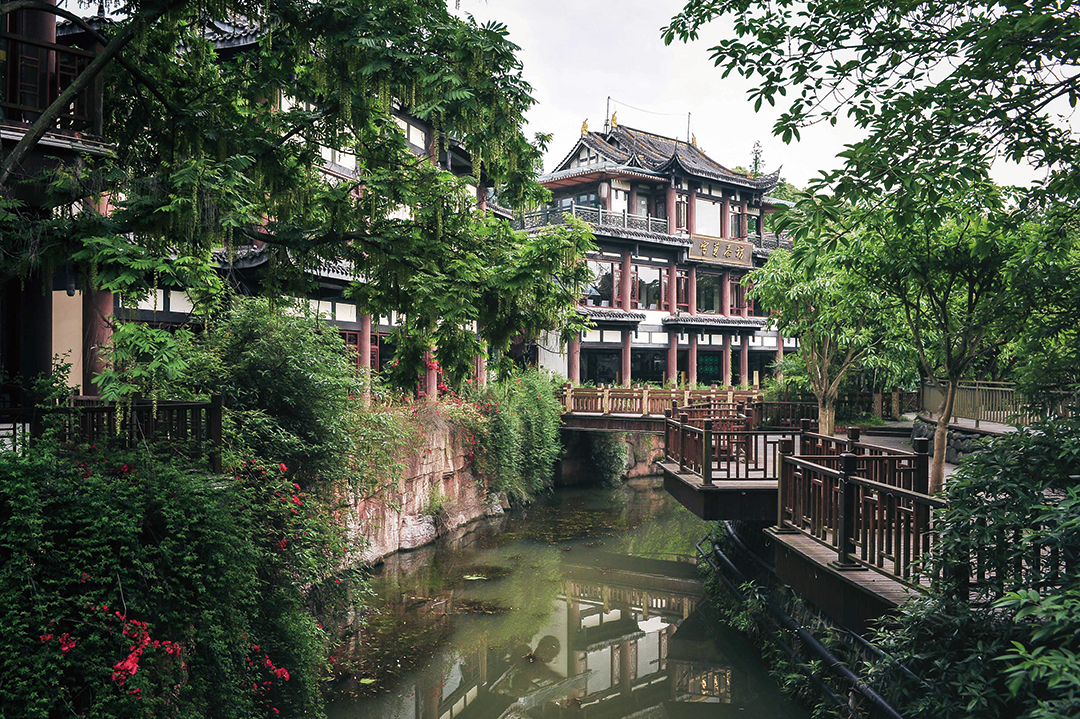 Something to listen for in Kangding
You can revisit Kangding Airport to head back to Chengdu after finishing your journey through eastern Tibet.
Although Kangding isn’t a colorful or big city, a lot of Chinese people have heard of it. This is because of the traditional folk song, “Kangding Love Song.”
The song, which is included in Chinese music text books, has a long history. It is an incomplete love story between the goddess of a lake and a blacksmith boy. The Kangding Love Song sings of the beautiful places around Kangding, including Paoma Mountain park, Nanwu Si Monastery and Mugecuo. Not only from the song, but if you see such places yourself, you will be deeply moved.