Ha Long Bay, the beauty of pearls from the mouth of a dragon
In Vietnam, there is a place where many small and big islands are gathered and it provides the world’s most beautiful and magical scenery. It’s Ha Long Bay.
Years ago, I watched an advertisement on TV that left quite an impression on me. In the ad, there’s an image of little islands in the middle of the sea, with two little wooden sailboats crossing past each other. Throughout the ad, it introduced the destination of the place, Ha Long Bay in Vietnam. Once it aired, I heard that Ha Long Bay became a famous site, with calls regarding travel opportunities backing up. While Da Nang and Nah Trang have become popular sites for family vacations in Vietnam, Ha Long Bay is once again receiving attention as another site not to be missed. 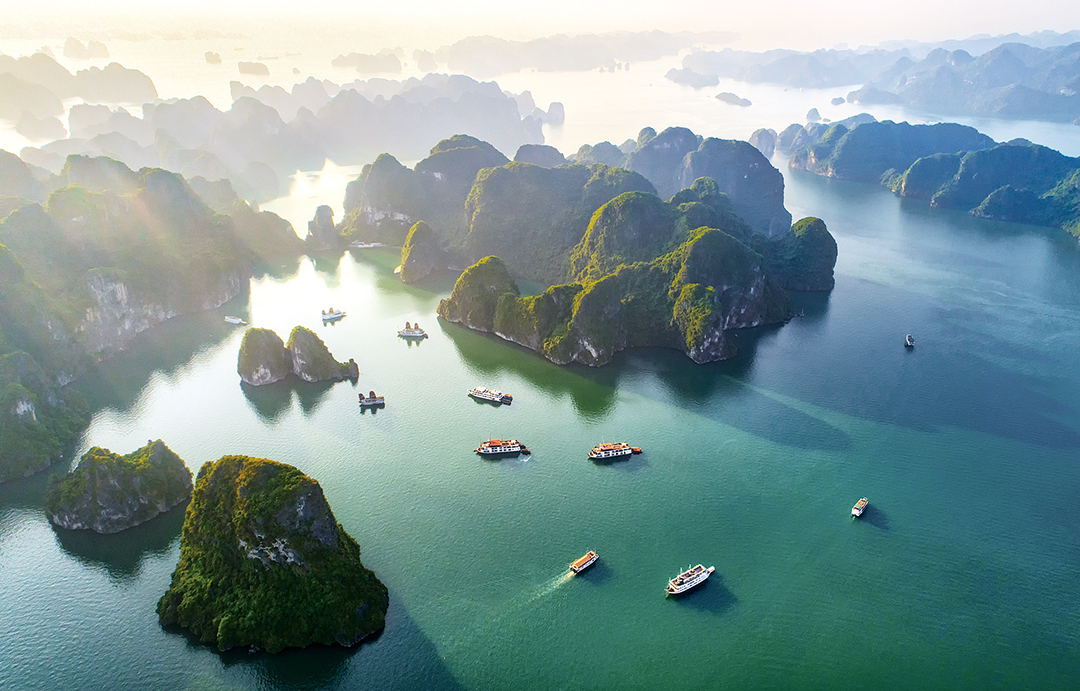 Ha Long Bay is home to islands eroded by the sea, wind and rain over many years, and to unusually-shaped limestone rocks nestled above the emerald-tinted ocean.
Thousands of pearls spat out by a dragon
Ha Long Bay is in the North-eastern part of Vietnam. With a total area of about 1,550 kilometers squared, it is famous for the unique atmosphere the 1,969 islands offer. On days when there’s fog on the sea, it looks just like an oriental painting. Due to this, Europeans called it “a dream-like Oriental space.” It received such evaluation in 1992, when Ha Long Bay appeared in the movie, “Indochine.”
To Europeans, especially to French people who used to occupy Vietnam as a colony, Ha Long Bay is a place filled with dreamlike beauty but also became a forgotten land. Once Ha Long Bay was recognized as a UNESCO World Heritage Site, it quickly became a popular travel destination. 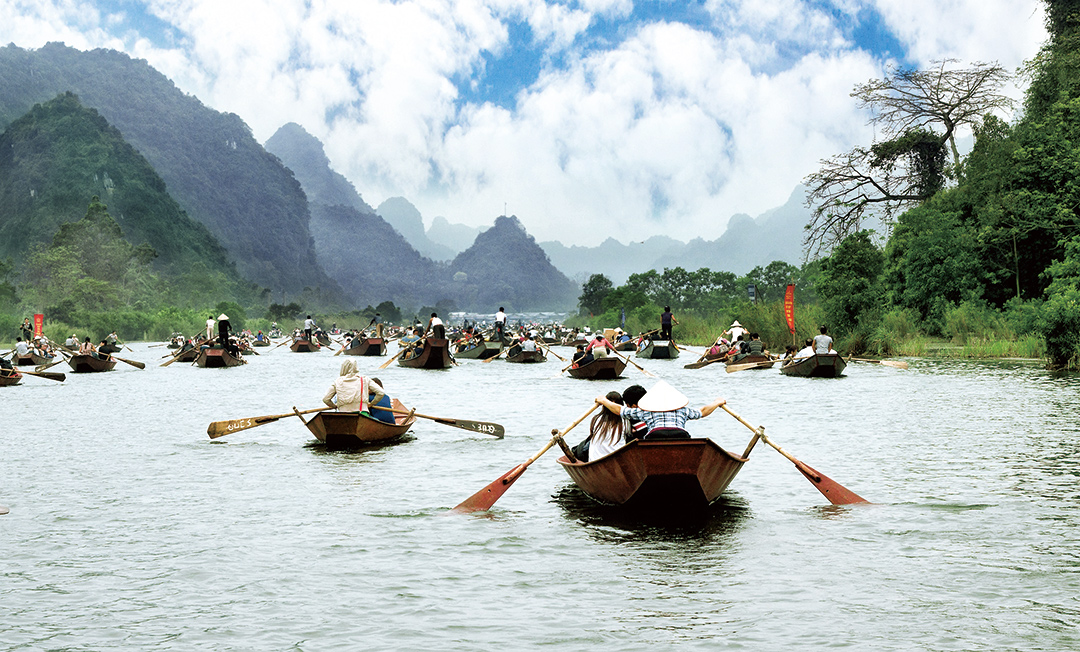 To get a closer look at Ha Long Bay, you should get off your cruise and board a smaller boat. © Shutterstock

Ha Long means “descending dragon.” When outside forces started to invade the area, the story goes that a dragon came down from the sky and created a storm to protect it. As the dragon spat out pearls from the sky, legend says that the pearls turned into the islands that dot the bay.
The islands and rocks, which have been eroded by sea water and storms over the years, quietly sit above the emerald sea.
There’re about five marine villages within the bay and each village has about 30 households. They normally earn their living through fishing, selling souvenirs to tourists or by running small boat tours.
Such a life is only possible as it doesn’t make big waves. One of the most famous villages is Cua Van, where people live in floating houses. Some live on fishing boats. When you get on a bamboo boat rowed by a local, you can see every detailed part of the village. As the younger people head out to the city, the size of the villages keeps on decreasing every year. However, as the world’s changing, they are not to be blamed. 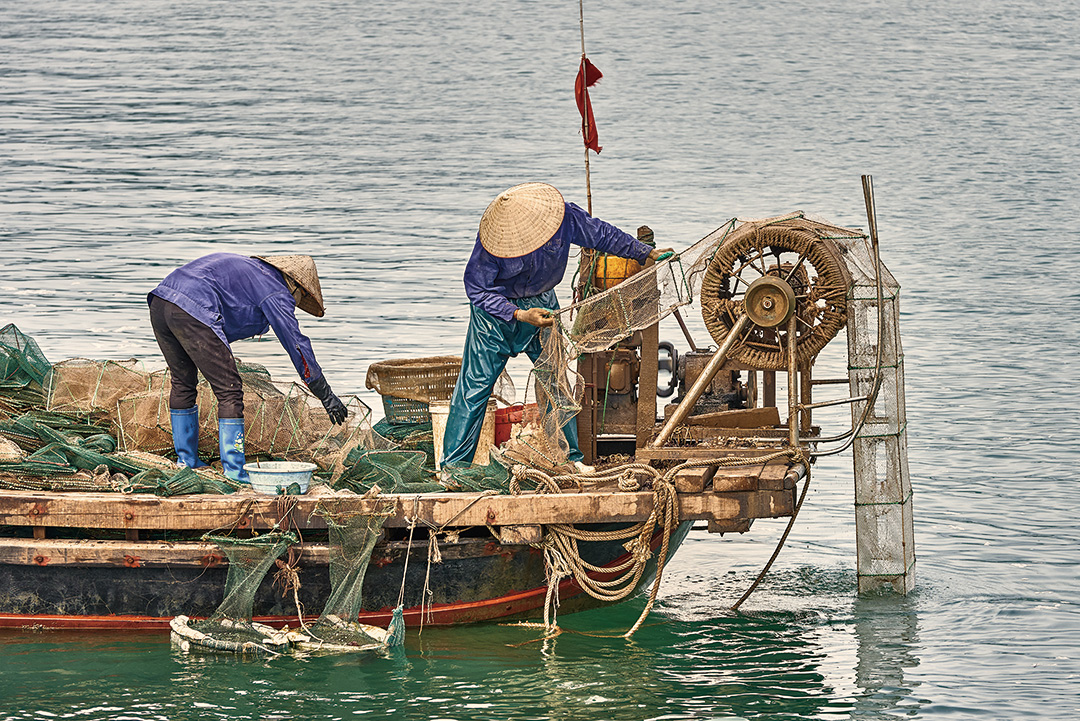 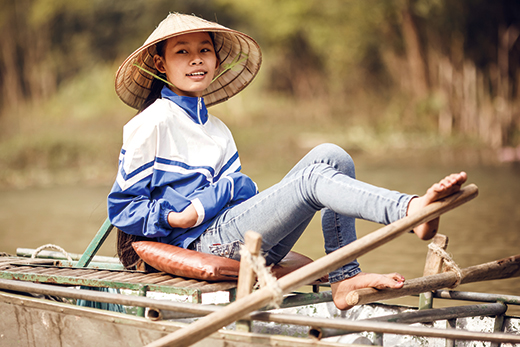 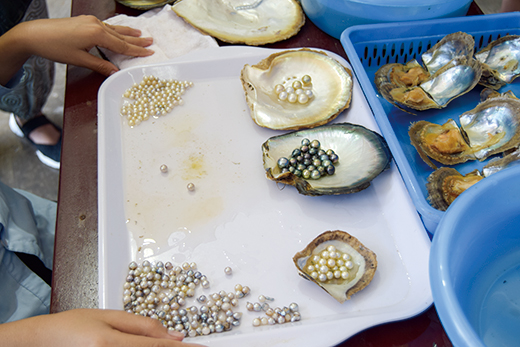 Nature that makes you gasp
Local residents named the islands with names like “lady,” “seal,” “thumb,” “fighting cock” and “dog,” based on the way they look. As people can’t live on the islands, a variety of animals inhabit them. On some islands, tropical jungles can be found.
Also, there’s an island where monkeys live. It wasn’t like this originally. After pharmaceutical companies finished experimenting on monkeys, they released them in Ha Long Bay. The monkeys that settled there mostly survived by eating roots and leaves. 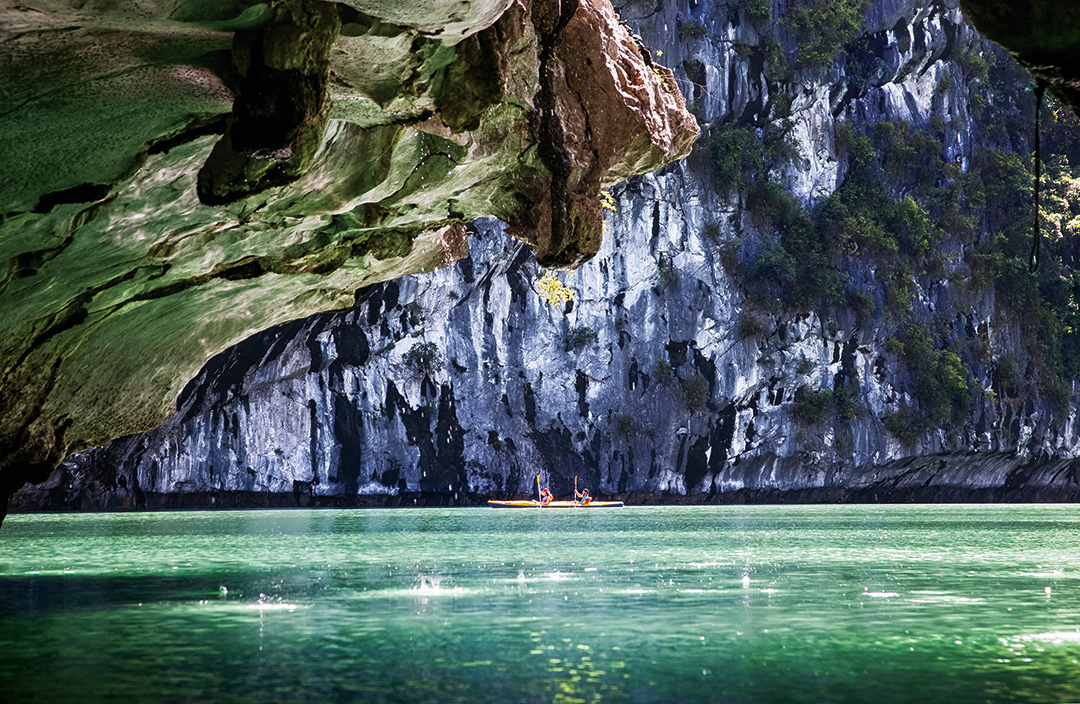 Some of the islands in Ha Long Bay have limestone caves, but the most famous one is SungSot Cave.
In English, SungSot means “surprise.” It is probably the exclamation by the person who first got to the end of the cave, after following a small path. To reach that “surprise” point you need a bit of patience. Once you get off your boat, you’ll pass through some woods and make your way up some stairs, then you’ll reach a cliff. Inside the cave, it is filled with stalactites and stalagmites, covering the ceiling and the walls. The scale is so big that it’ll make you feel like you’re at a giant theme park. 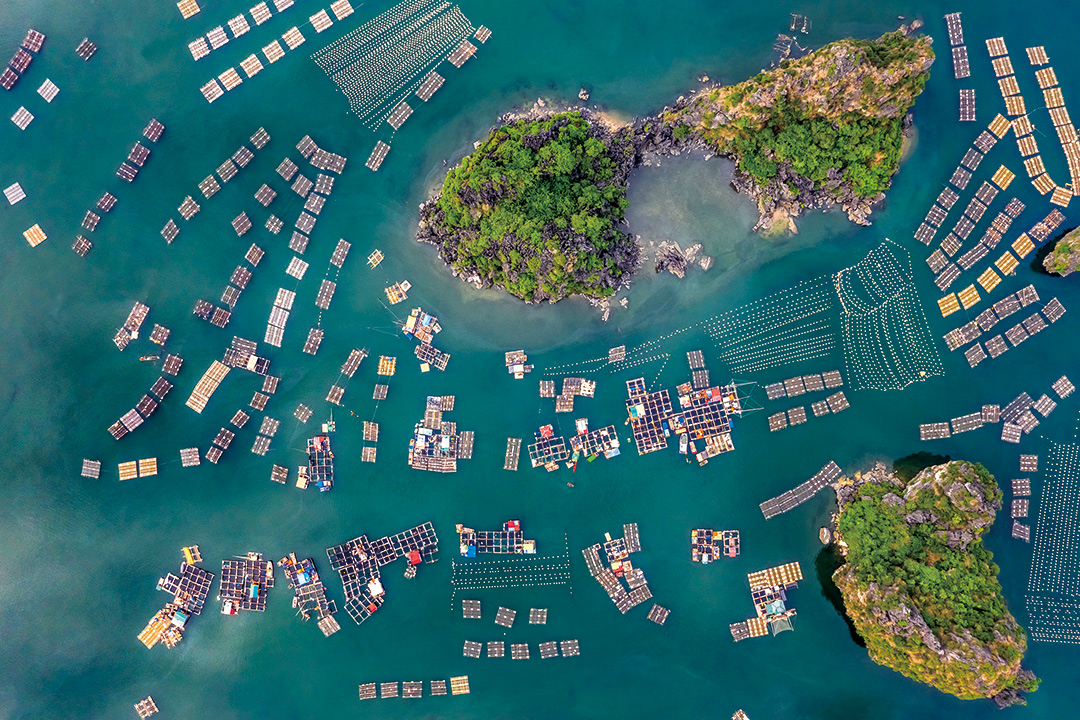 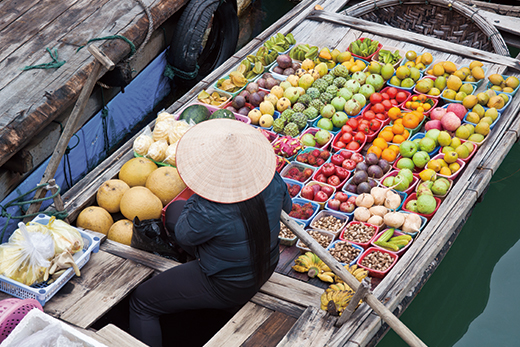 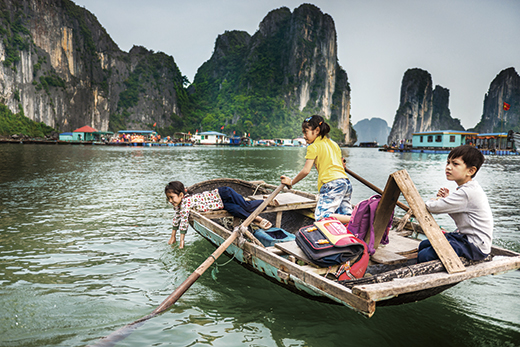 Whether you’re selling fruits or going to school, riding a boat is a way of life. © Shutterstock

By air or sea
There are really only two ways to experience Ha Long Bay, either from the sky in a light plane or from sea-level by boat.
If a light plane is too difficult, you can also see the lower islands from the observatory at Titop Island, and on your way to this island you’ll get to experience many things. You’ll pass by caves as well as a coastal town where the houses are built on stilts over the water. Titop Island, which is named after Soviet cosmonaut Gherman Totov, is located in the center of the other islands and is higher, so it’s a great spot to view the area. Once you arrive at the island, you’ll have to take about 400 steps, a roughly 20 minute journey, to get to the observatory. A lot of travelers take panorama photo of the scenery from the observatory. 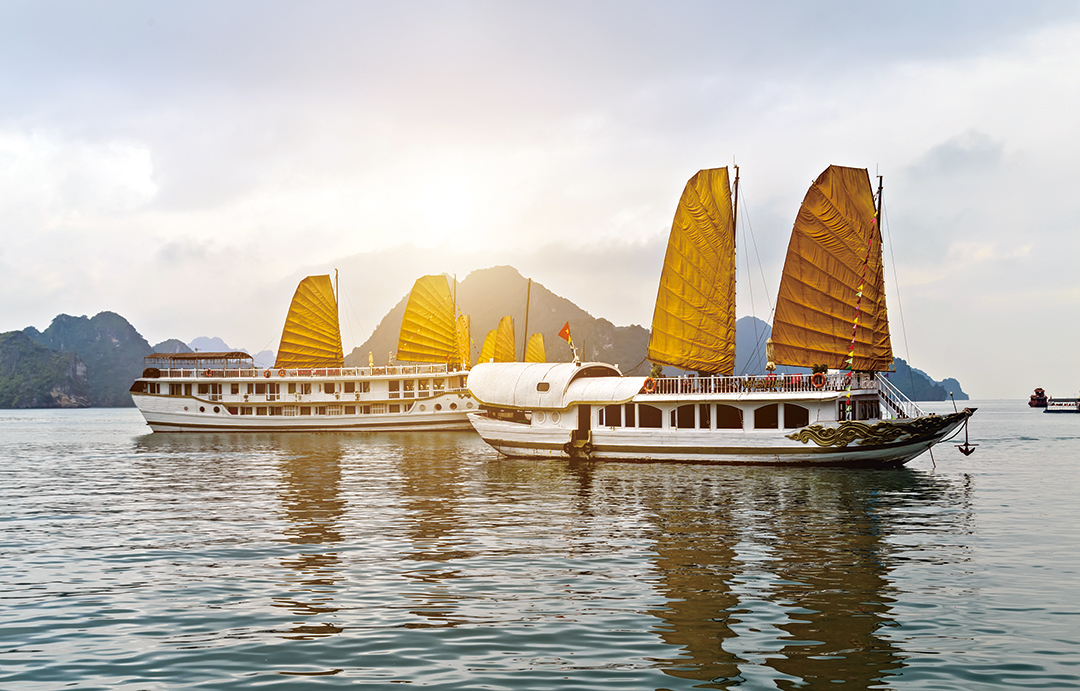 But the majority of travelers who visit Ha Long Bay choose to look at the islands by the boat. By taking a small wooden vessel, you can easily spend half a day enjoying Ha Long Bay. Recently, larger cruises with modern facilities have becoming popular, as it allows travelers to relax and take more time looking through the islands for a few days. Although it’s a big cruise, it’ll feel old fashioned due to the retro design of the boat, which still uses sails.
If you choose to take a cruise tour, it’ll last a couple of days. I recommend instead that you take a half- day boat tour every day. By doing so, you get to enjoy an Island hopping tour in a small boat. You can relax by lying on a sun bed on the cruise or try your hand at kayaking. 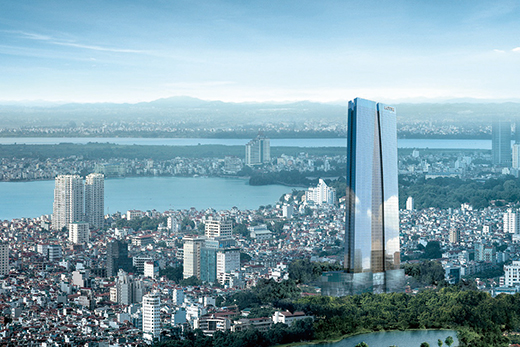 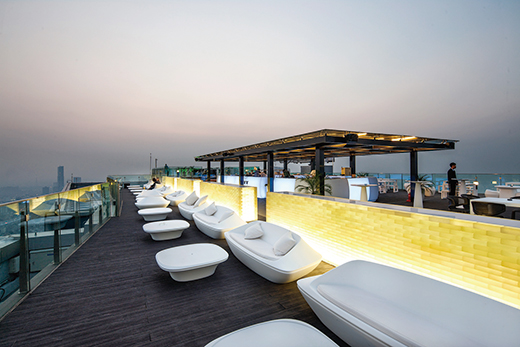 Where to stay on a trip to Ha Long Bay: LOTTE HOTEL HANOI
To get to Ha Long Bay from Korea, you normally need to fly to Hanoi. This is a reason why Hanoi is always included in a trip to Ha Long Bay. In Hanoi, the LOTTE HOTEL HANOI is the place to stay. The five-star hotel is located at Lotte Center Hanoi, which is located in between the old downtown and new downtown, the exclusive business zone.
The design of the 318 rooms is derived from the beauty and traditional patterns of Vietnam, as well as the dining restaurant that serve specialty products from Vietnam and around the world. The LOTTE HOTEL HANOI provides an exclusive service in Hanoi, the capital of Vietnam.