Global Community Runs NYC Marathon
The annual New York City Marathon kicks off on the first Sunday of November. Every year, the five boroughs of the city, including Manhattan, Brooklyn, Queens, the Bronx, and Staten Island, become flooded with runners from all across the world and spectators cheering them on.
Since its inaugural event in 1970, the TCS New York City Marathon, has been held every year except for 2012 when the race was canceled due to Hurricane Sandy. The marathon marks its 49th anniversary this year as one of the largest running competitions in the world. An average 50,000 marathoners, professionals and amateurs from across the globe, gather in New York City to run the course lined with over a million spectators. The beginning was humble though. When Fred Lebow, a former president of New York Road Runners, founded the New York City Marathon in 1970, the participants simply ran several loops around Central Park. With the help of marathoner Ted Corbitt, the five-borough course was devised in 1976, which also enabled families and friends of the runners to come out and enjoy the race. That’s how the New York City Marathon started cultivating its own color. 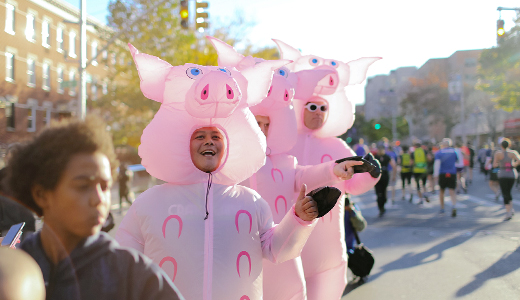 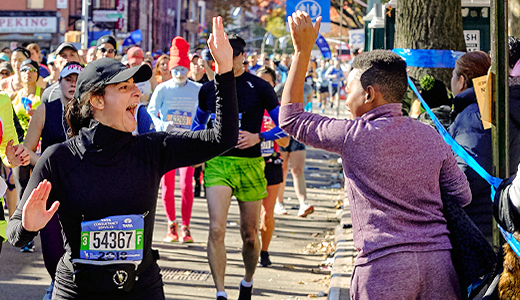 Urban Festival Featuring Local Culture
The New York City Marathon course has spectator viewing spots in each section of the race, presenting a good opportunity to experience local characters. With the exception of 3.2km in the beginning of the race, spectators can follow the course to the finish line and take advantage of various local food vendors and mini events. Performances by local musicians along the race makes the New York City Marathon even more exciting. Runners and spectators are greeted by more than 130 bands that share the enthusiasm over the marathon across the five boroughs. The list of participating bands and performance venues can be found on the TCS New York City Marathon app.
Spectator Viewing Spots
1.6~3.2km: Staten Island & the Statue of Liberty
The start of the 42.16km-long race will be signaled by an air horn on Staten Island located in the south of New York City. Beginning with the Professional Wheelchair Division at 8:30a.m. to Wave 4 at 11a.m., some 50,000 runners will start at the time designated for their respective groups. Unfortunately there’s no spectator viewing at the starting point. You can still watch the runners crowding the Verrazano-Narrows Bridge through live broadcasting on WABC-TV or Channel 7. 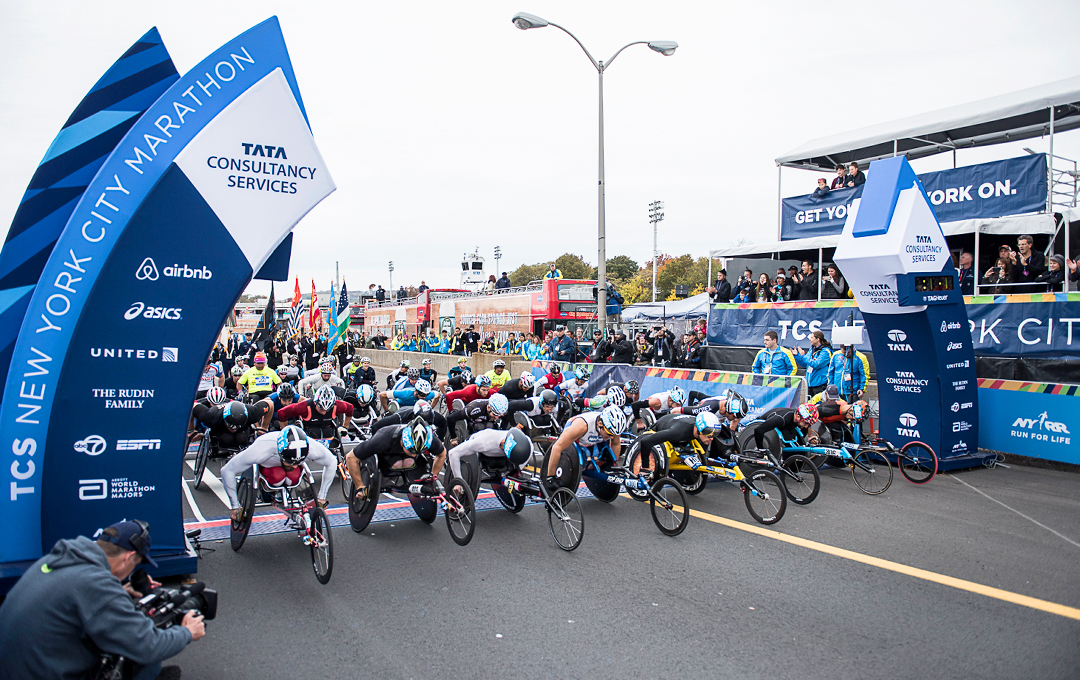 4.8~20.9km: Explosive Energy in Brooklyn
The runners feel the greatest excitement when they hear the shouting and cheering of the spectators for the first time, entering Fourth Avenue in Brooklyn(Spots1-2) after exiting the Verrazano-Narrows Bridge. The Brooklyn route passes Bay Ridge, Sunset Park, and Park Slope neighborhoods to reach Williamsburg and Greenpoint(Spot 3) where trendy shops and stores along Bedford Avenue allure young spectators to enjoy the hip local culture.
[Spot 1] 3.2~6.4km: Spectators await the runners to cheer them on as they enter Brooklyn. Take Subway R to get off at the southern tip of the borough.
[Spot 2] 12.8km: Subway B/D/N/Q/R/2/3/4/5 will get you to Greenpoint to enjoy the shops and restaurants on Atlantic Avenue and cheer on the marathoners.
[Spot 3] 25.7~33.7km: The route covers the Pulaski Bridge leading to Queens. Take Subway G/M/L and get off at Greenpoint in the upper Brooklyn neighborhood.
21~24.1km: Toughest Point in Race, Queens
The marathoners cross the Pulaski Bridge to enter Long Island City(Spot 4) in Queens. After running 4km more, they reach the Queensboro Bridge connected to Manhattan. About halfway through the marathon, passing the 21km mark, the runners face their first crisis. Since no spectators are allowed on bridges, they have to embrace the psychological, physical pain and continue running, with the beautiful East River scenery keeping them company.
[Spot 4] 21km: Most spectators cheer on from the Queens side across the Pulaski Bridge. Take Subway 7/G/E to get off at Long Island City, Queens. 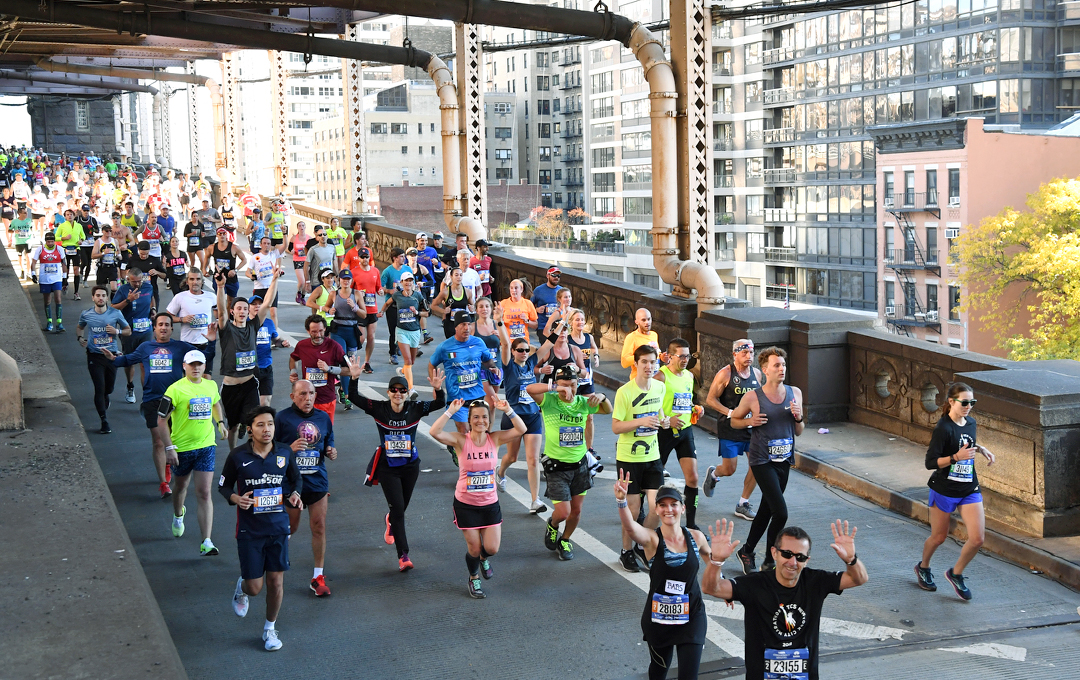 25.7~28.9km: Taste of Manhattan in Upper East Side
Manhattan’s First Avenue(Spot 5) is the main route to go to the Bronx from Queens and also where the loud encouragement by the spectators resumes. The festive energy from local bars and restaurants nearby can be refreshing to the runners entering the second half of the race.
[Spot 5] New Balance 25.7km Block Party: On First Avenue at 62nd Street, cheer on the runners together with DJ performances using a jumbotron. Take Subway Q/4/5/6 to get off at Lexington Avenue at 59th Street. You can walk to Upper East Side from there. 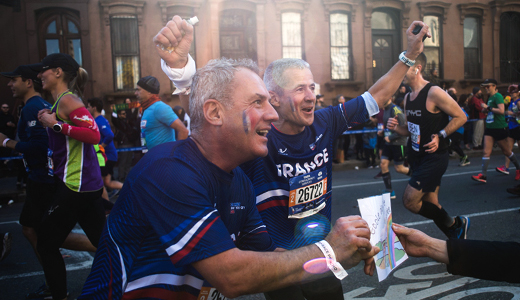 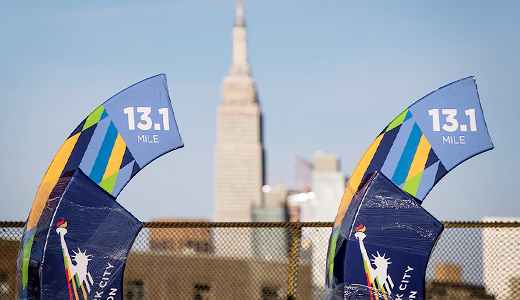 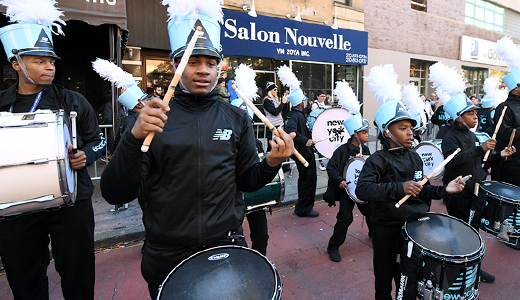 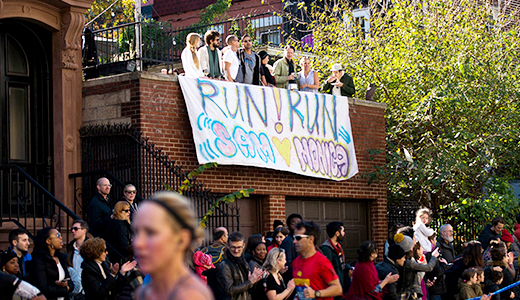 30.5~32.1km: The Bronx & Harlem
Running northbound along First Avenue will get one to the Willis Avenue Bridge connected to the Bronx. Cheered on by mostly Latino communities in the area, the runner go 1.6km to reach the Madison Avenue Bridge. They will pass East Harlem(Spot 6) and come down to Fifth Avenue(Spot 7).
[Spot 6] 28.9~32.1km: Harlem, well known for the African American community, is actually home to various ethnic groups. At East Harlem, also called “Spanish Harlem,” vibrant Latin music will give the runners a boost of energy. Take Subway 6 and get off at the entrance to the Bronx.
[Spot 7] 33.7~37km: This section, from East 90th Street to East 105th Street on Fifth Avenue, is famous for museums. Check out the Guggenheim Museum and El Museo del Barrio while cheering on the marathoners. Subway Q/4/5/6 can get you to Upper East Side. 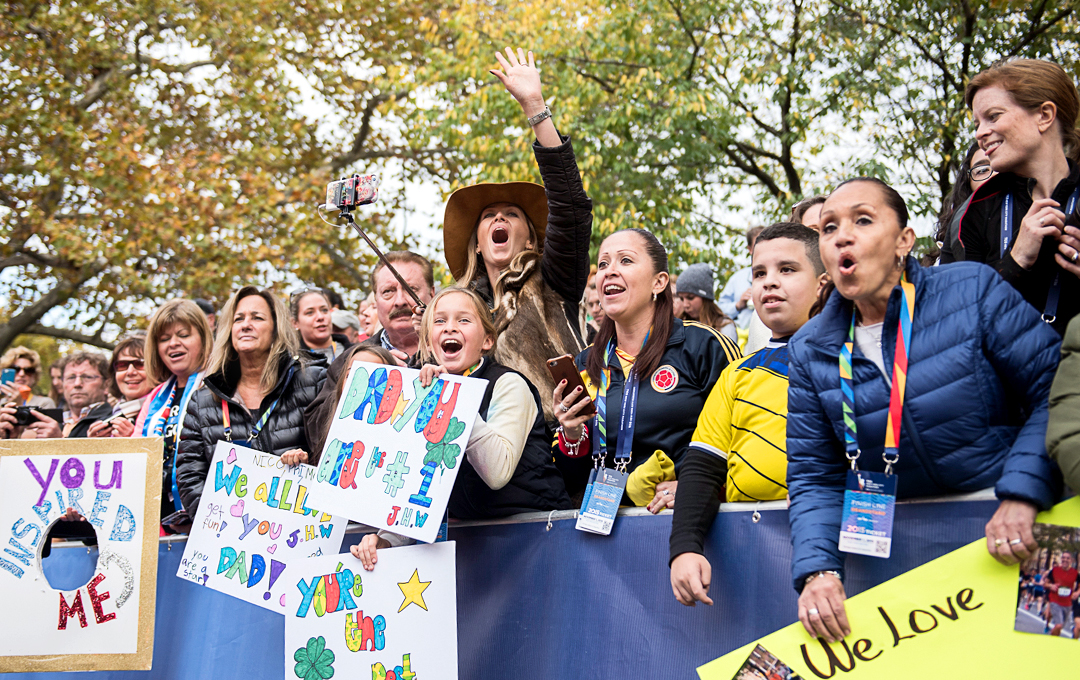 38.6~42.16km: A Grand Finale at Central Park
Central Park gets crowded with thousands of spectators celebrating the race finale. There are two ways to give the runners one final push. First, you can get a seat at Grandstand section to witness the finish-line crossing(Spot 8) or stand in the Standing Spectator Area located inside Central Park from Columbus Circle to the south end of the Grandstand Seating(Spot 9).
[Spot 8] Grandstand Seating: Located at Tavern on the Green on West 67th Street, tickets for the Grandstand seats must be purchased prior to race day. You can buy tickets also at the Marathon Expo, Pavilion, and online in advance. On the day of the event, tickets are sold at the West 63rd Street entrance to Central Park.
[Spot 9] Standing Spectators: Inside Central Park from Columbus Circle where TCS Cheer Zone is set up to the south end of the Grandstand Seating, spectators are allowed to stand and watch the finale. Due to the limited space, the area can fill up fast. Entrance to the north of the Grandstand is blocked. The finish line is runners only area. Organizers of the event set the area in Central Park between West 62nd Street and West 65th Street for family reunions. Subway A/C/B/D/1 will get you to Upper West Side (from 59th Street to 72nd Street). 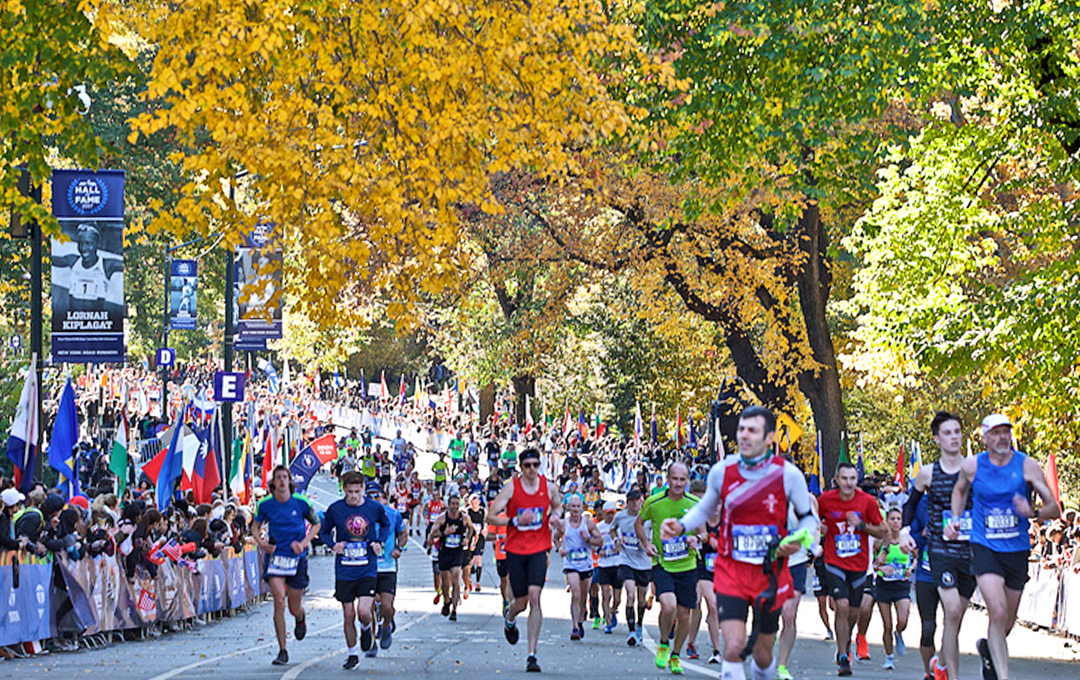 Economic, Social Meaning of Runners’ Event
The New York City Marathon started off as a small local event and grew to become a global festival. By developing various tourism items and cultural content to be featured during the event period, New York City has achieved $4.15 million in financial gains as of 2014. That’s not all. In 2018, about $400,000 collected through the race by over 10,000 charity runners was given to hundreds of non-profit organizations and used to provide young athletes with fitness programs at an affordable price. 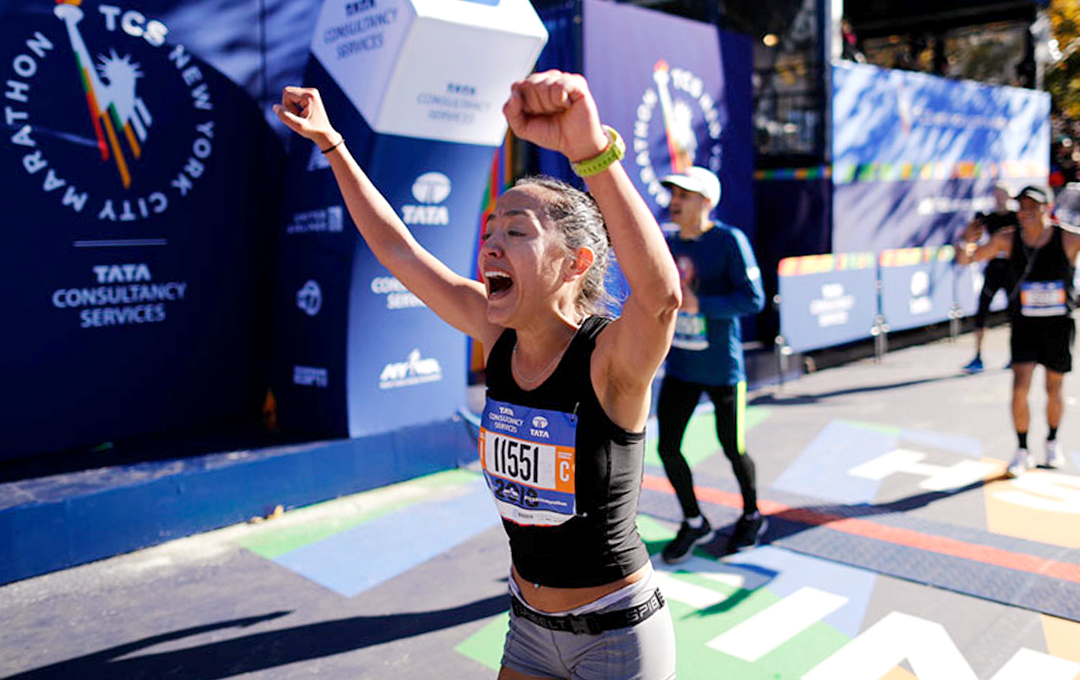 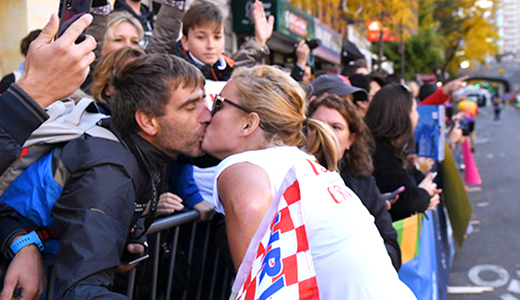 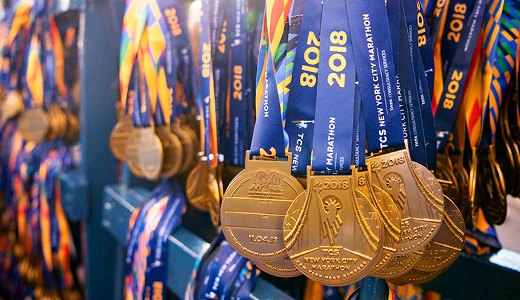 Tip. How to Have 100 Times More Fun at TCS NYC Marathon
Get used to the subway. Barring local differences, the marathon course will be blocked off from outside traffic between 7a.m. to 3-4p.m. on average, but the blockade can extend even further on race day. Although New York City’s subway is notorious for its lack of hygiene, it does connect the entire city like a spider web as the main transportation for New Yorkers. Purchase the MetroCard in advance and check the MTA Trip Planner frequently as the metro schedules are subject to change during the weekend or event periods.
If you plan to root for a specific runner in multiple locations, you’d be advised to download the event app. Register the information of the runner on the TCS New York City Marathon app, track the runner real time, or create your own itinerary to plan your day. The app is updated at the end of October every year. Information is also available at the TCS NYC Marathon Expo and TCS NYC Marathon Pavilion located near Tavern on the Green. 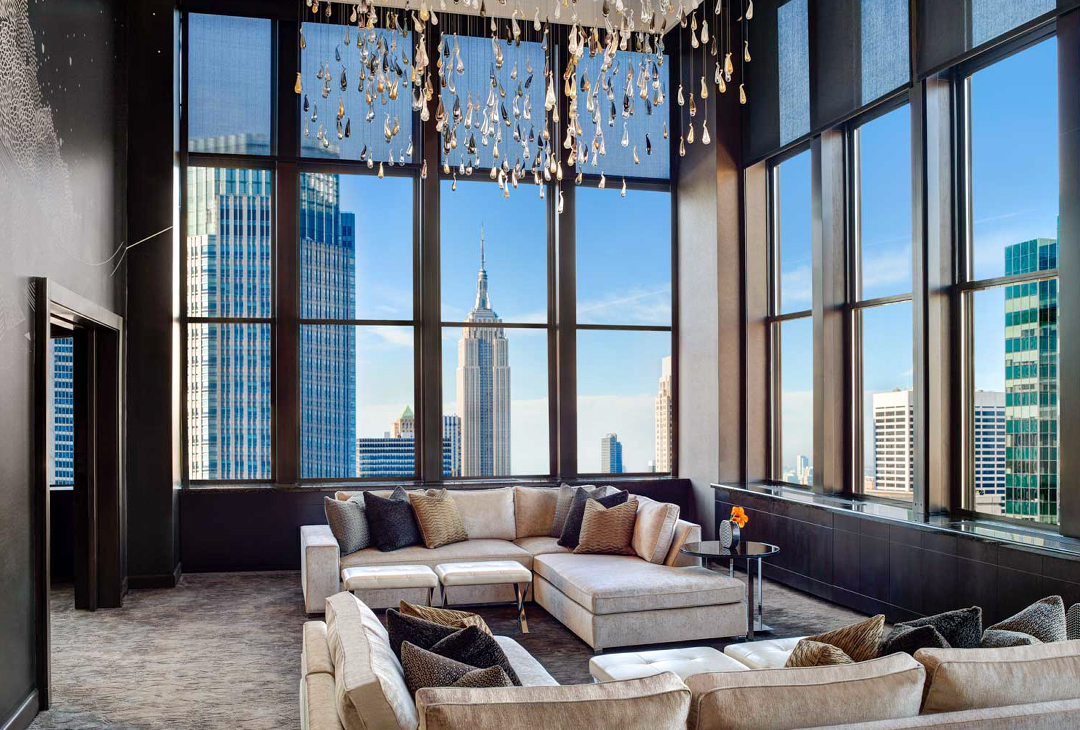 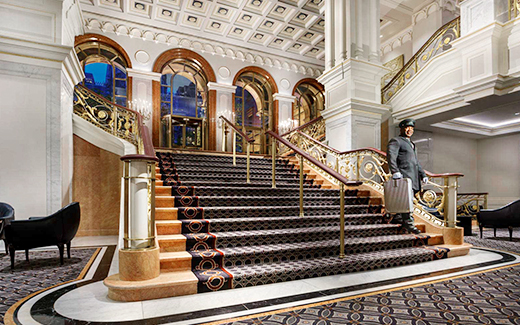 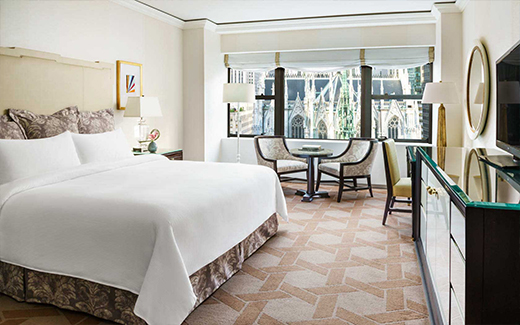 Where to Stay in New York: LOTTE NEW YORK PALACE
In the heart of Manhattan surrounded by skyscrapers, LOTTE NEW YORK PALACE stands proud as an iconic building of the city with its palatial exterior. What used to be the historic Villard Houses built in the late 19th century by railway financier Henry Villard now houses a luxury hotel. LOTTE NEW YORK PALACE is comprised of the European-style mansion, a courtyard, and a modern skyscraper. It’s a large hotel with 909 rooms including the Jewel Suite by Martin Katz, a jewelry designer famous for his works for Angelina Jolie and Nicole Kidman. The hotel is popular for its dining and drinking options, including invitation-only lounge Rarities and cocktail bar Trouble’s Trust.
Address 455 Madison Avenue at 50th Street, New York, NY, USA
Phone +1-800-804-7035
Homepage www.lottenypalace.com