A night at LOTTE NEW YORK PALACE, an iconic hotel in New York
Midtown Manhattan, the center of New York, is home to a hotel favored by the VVIPs. This is the story of LOTTE NEW YORK PALACE, an architectural marvel and a very special hotel.
New York’s cultural heritage, the pride of New York
The United Sates is a country with historic skyscrapers. After a 10-story high home insurance building was built in Chicago in 1885, the United States started to become a kingdom of skyscrapers. Although the skyscraper boom spread across the country, New York’s midtown quickly established itself as the new home of skyscrapers. New York’s elite dreamed of looking across the city from the top of their concrete towers, and Harry Helmsley was one of them.
In 1972, Helmsley bought Henry Villard’s house, built in 1882, with the plan of demolishing the old house and building a skyscraper. But once Villard’s family heard the plan, they submitted an application to make the house a cultural heritage. The application was accepted, and the demolition plan was canceled.
This is the start of the 137-year history of LOTTE NEW YORK PALACE.
Although the new status ruined Helmsley’s plans, in the long run it was a good thing. Villard’s house was now one of New York’s cultural heritages, a building that was indisputably an integral part of the city’s history.
Helmsley went on to get permission to build a 55-story high building in the land immediately behind the house. That building is now the LOTTE NEW YORK PALACE, an iconic building in Manhattan. 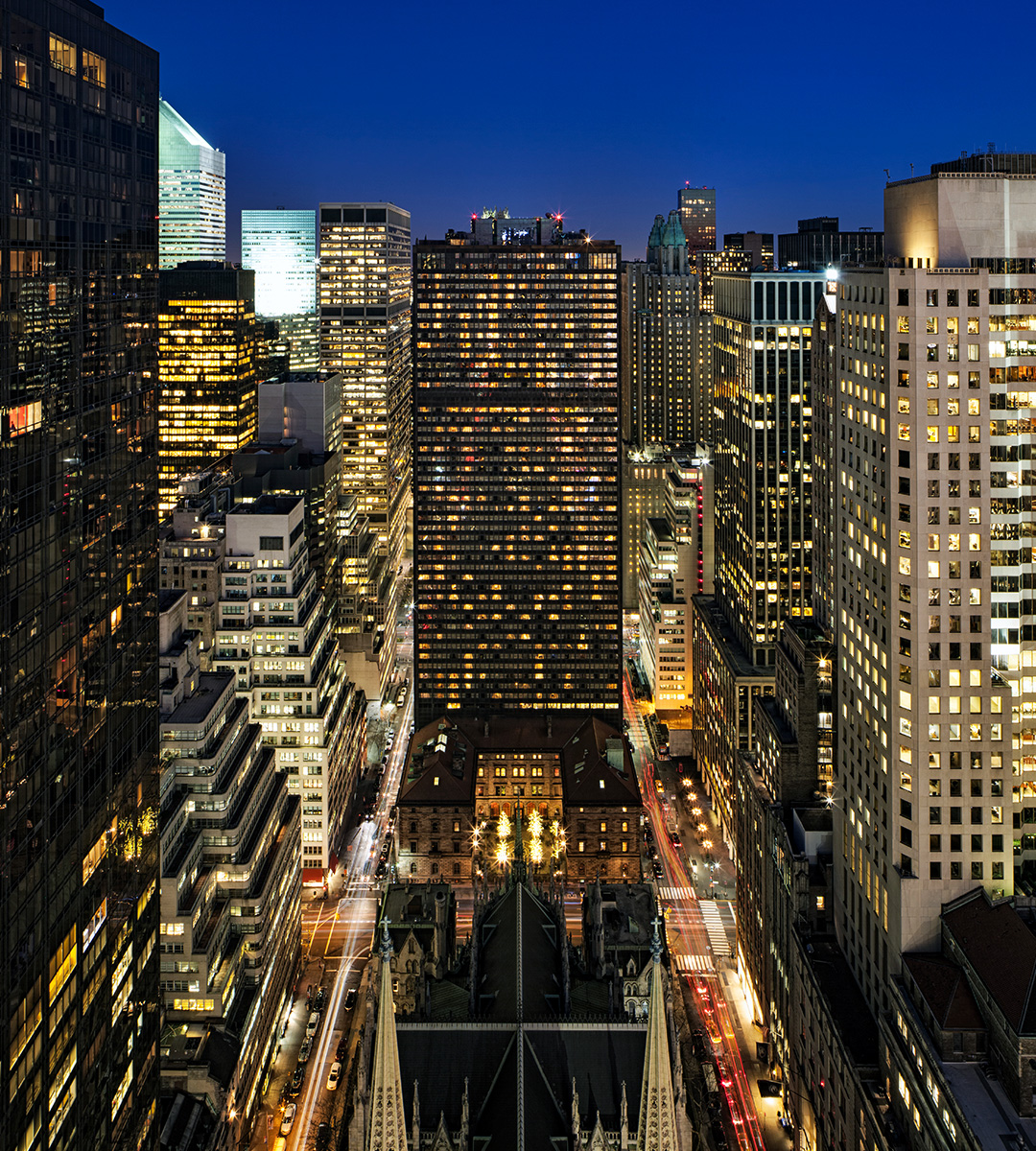 Accommodation beloved by VVIPs
Manhattan is one of the most expensive islands in the United States, as it is surrounded by the Hudson River and the East Lake. Midtown Manhattan, located around the southern part of Central Park, is the center of all Manhattan. In Midtown, all of New York’s landmarks, such as Times Square, Carnegie Hall, Highline Park, Chelsea Market, The Museum of Modern Art, Union Square and Hudson Yards are located. LOTTE NEW YORK PALACE is also in midtown Manhattan. 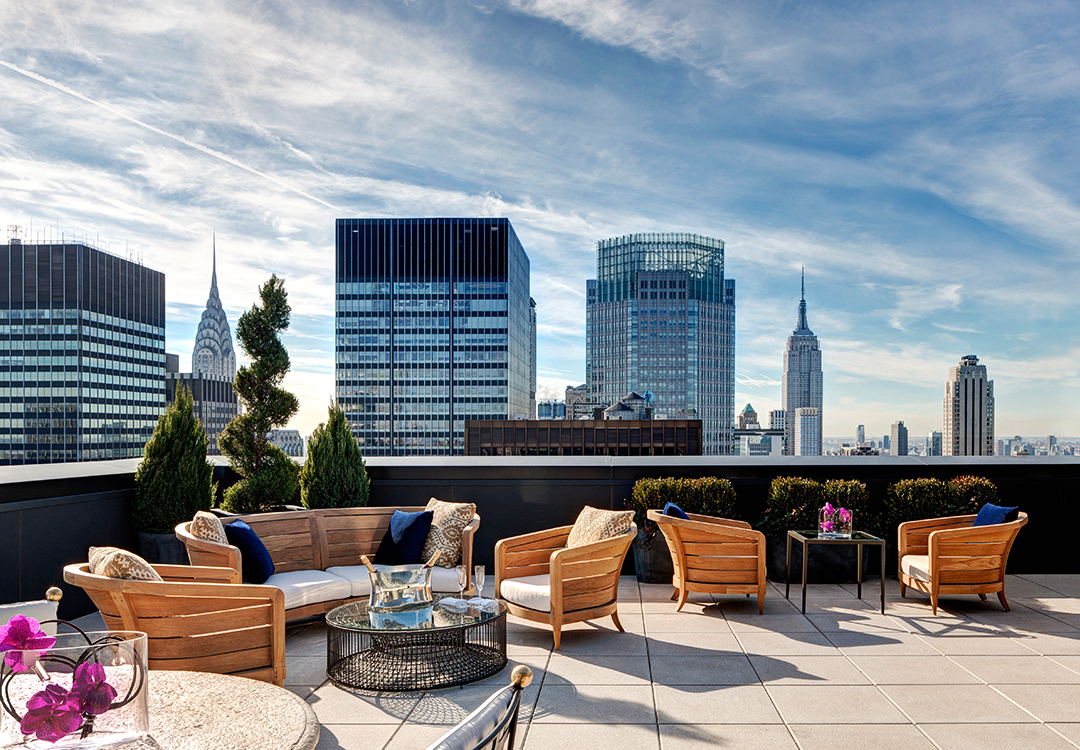 LOTTE NEW YORK PALACE was listed as one of the “New York’s 10 most historic hotels” in the travel magazine Travel+Leisure. It was also listed as one of “20 Places to Celebrate The Holidays” in the Forbes Travel Guide.
The hotel is famous for accommodating VVIPs. After Gossip Girl, it has become a tourist site and a lot of America’s top celebrities like Robert Downey Jr., Justin Bieber and many more others have stayed at the LOTTE NEW YORK PALACE. When the U.N. General Assembly is held every September, it’s also become a popular place for senior government officials from around the world to stay.
U.S. President Donald Trump and Korean President Moon Jae-in held last year’s summit at the LOTTE NEW YORK PALACE. A friendly tennis event called “The Palace Invitational,” which is held ahead of the U.S. Open, is held for five years. The friendly hosts famous players like Rafael Nadal and Venus and Serena Williams.
There’s nowhere quite like the Big Apple during the holidays, and this elegant four-star hotel wants to help you experience the magic in style.
“Forbes,” ‘20 Places To Celebrate The Holidays’ 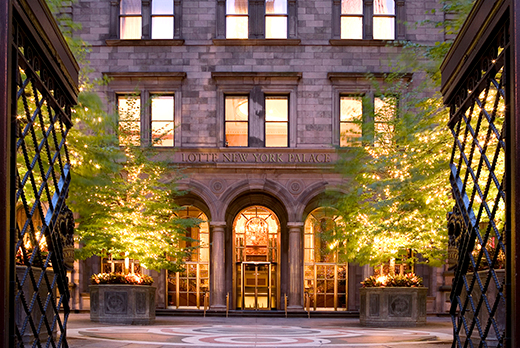 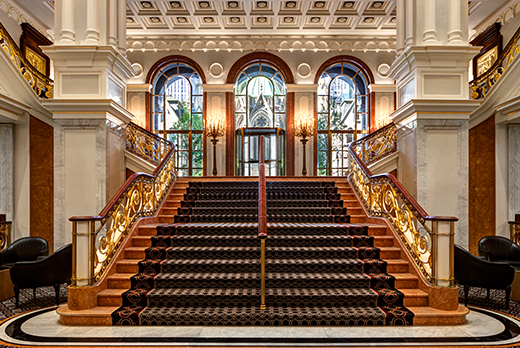 The most impressive lobby in New York
The entrance to the LOTTE NEW YORK PALACE is extraordinary. Once you get through the courtyard, a public place in New York City, you’ll finally get inside the palace. There, you’ll see the LOTTE NEW YORK PALACE’s lobby, known for its beauty.
It sure isn’t an exaggeration as it was listed in Forbes’ “The Most Impressive Hotel Lobbies in New York City.” With neo-Italian Renaissance style architecture and golden and shiny decorations like a European palace, the lobby provides a classic and elegant atmosphere.
The water drop-like chandelier also adds a modern artistic touch. During the Christmas season, it’ll add more color to the lobby by displaying a giant tree that almost reaches the ceiling.
LOTTE NEW YORK PALACE has a total floor area of about 8,250 square meters. It has a total of 909 rooms, which are divided into 733 five-star rooms and 176 six-star rooms. The first five floors are a part of the Villard house heritage building, while the main building, the five-star hotel, is from the ninth to the 39th floor.
The six-star hotel is called the tower, from the 40th to the 55th floor. The highest floor in the tower is the Champaign suite, which has an exclusive use area of about 5,000 square meters, three stories high. It is famously known as the biggest suite room in New York. In this room, you can see all of Manhattan’s top sights, including the St. Patrick’s Cathedral, Rockefeller Center and Empire State Building. 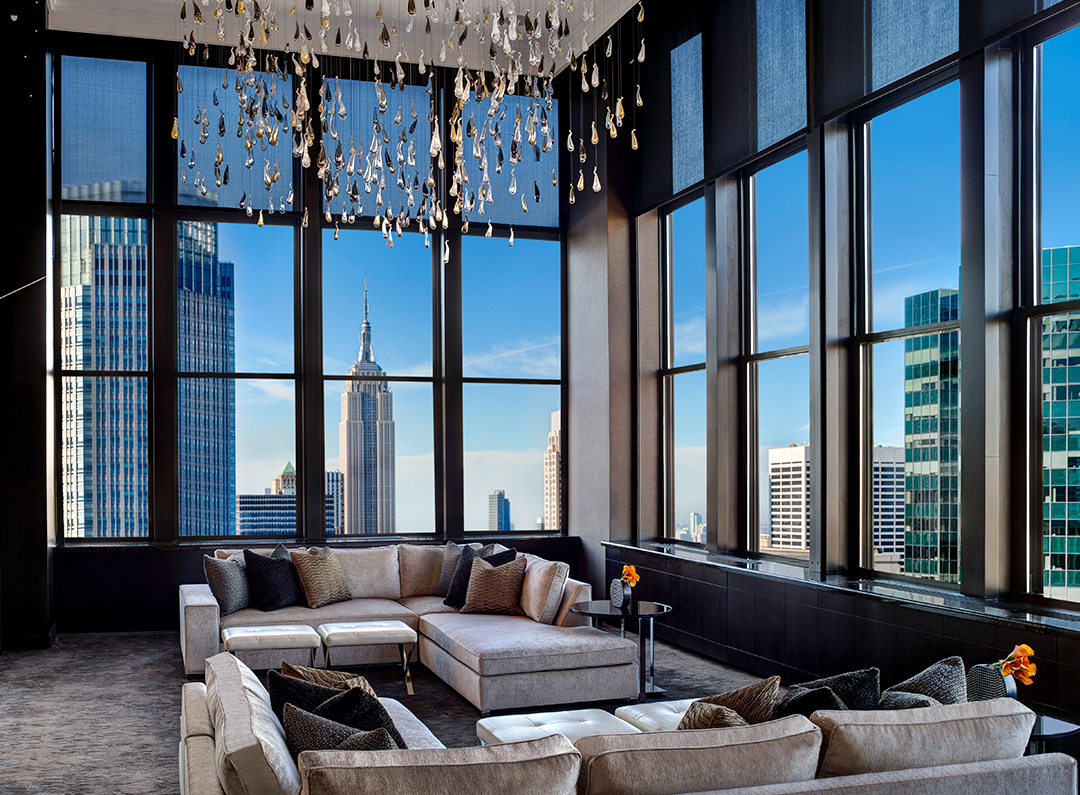 A luxurious night in New York
The hotel is not only filled with magnificent lights and rooms. LOTTE NEW YORK PALACE also has various ballrooms and dining areas. In the courtyard, you can enjoy wine and light snacks, while you can enjoy breakfast and brunch at the Villard Restaurants and other eateries. In the basement of the hotel, there’s a bar called Trouble’s Trust. The bar was given the name after Leona Helmsley left millions to her puppy “Trouble.”
You can enjoy luxurious Champagne, New York beers, cocktails and many other drinks, but the most interesting is a champagne cocktail called “Gossip Girl.” It was made to celebrate the LOTTE NEW YORK PALACE being used for the filming of Gossip Girl, which was on screens from 2007 to 2012. 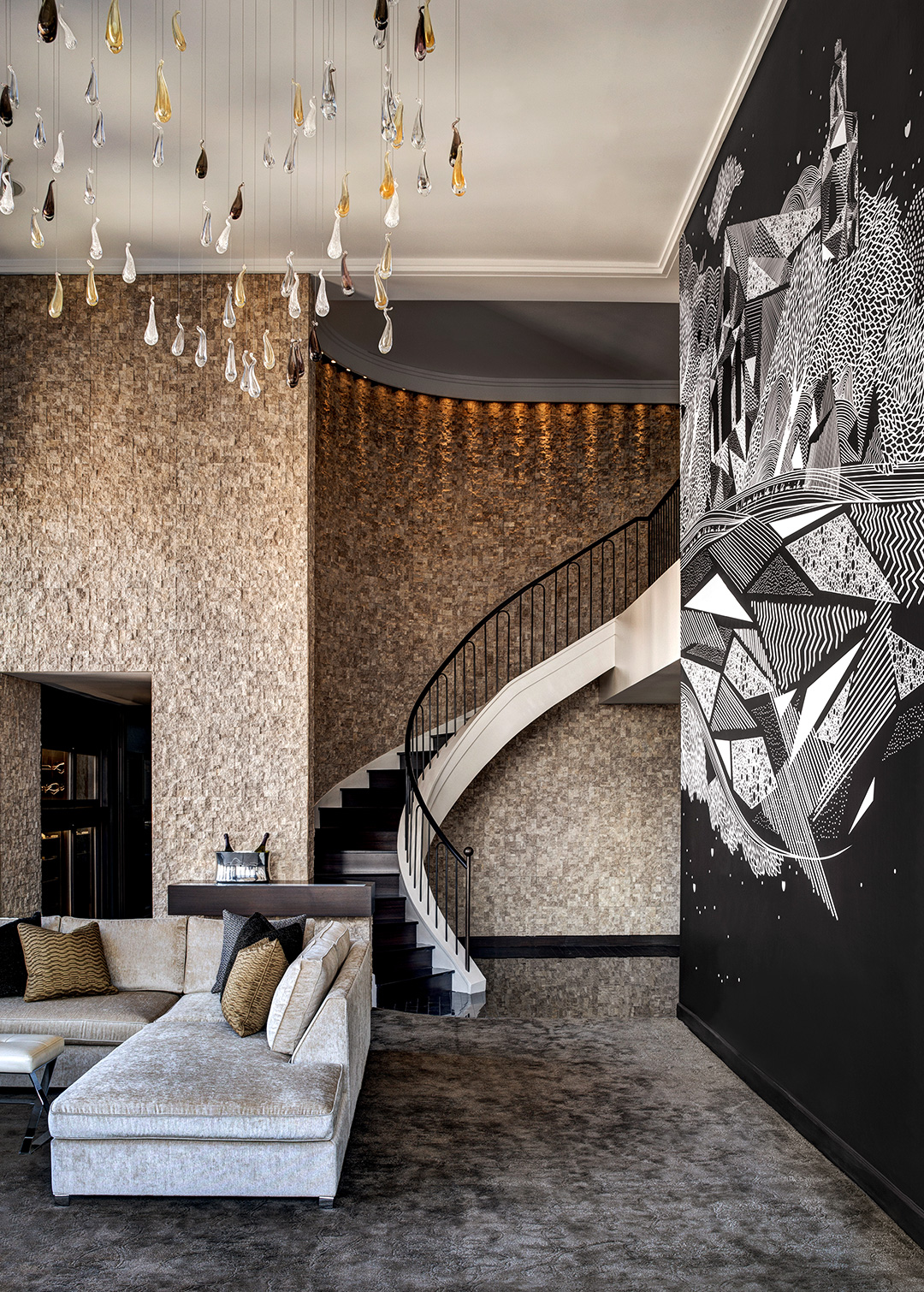 Recently, the LOTTE NEW YORK PALACE has implemented the LOTTE HOTEL’s business style. As a result, promotional packages have become very popular. Of all, the Radio City Christmas Spectacular show package, which is held at the Radio City Music Hall during the Christmas season every year, and the Gossip Girl Getaway packages, are the most popular.
Each package provides a 25 percent discount for a show. The Gossip Girl package not only provides a 25 percent discount for the Gossip Girl guided tour, but also includes two glasses of Gossip Girl cocktail at Trouble’s Trust bar. 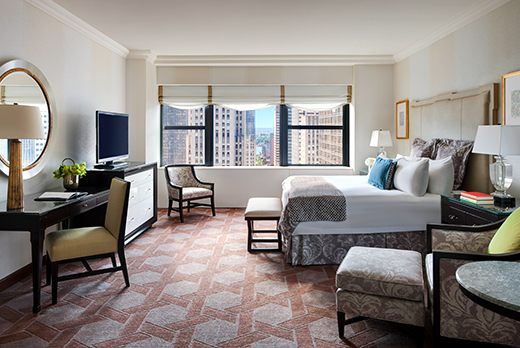 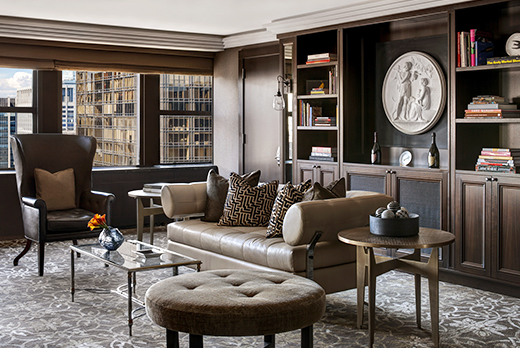 LOTTE NEW YORK PALACE
Address 455 Madison Avenue at 50th Street, NEW YORK
Phone +1-800-804-7035
Website www.lottenypalace.com
End of the year festivities in New York
Times Square New Year’s Eve Ball Drop
The Times Square New Year’s Eve Ball Drop marks the end of the year, with about 1,500,000 to 2,000,000 people from around the world gathering to celebrate. As it began in 1904, this is the 115th year of the festival. On December 31 every year, the countdown starts at 11:59 p.m. Right at midnight, fireworks go off and a New Year’s message is presented on the electronic display.
www.timessquarenyc.org

Holiday Lights at Bronx Zoo
The Bronx Zoo also holds a unique end of the year festival called the Holiday Lights at the Bronx Zoo. During the festival, lights and LED animal figures are displayed around the zoo, making visitors feel like they’re in a movie. A holiday train, ice carving demonstrations and many more events are also held. The festival will be open from 5 p.m. to 9 p.m. every day except for Friday and Saturday, when it is open until 10 p.m.
www.bronxzoo.com/holiday-lights