A Journey to Christmas in Moscow
Come winter, Moscow puts up colorful, splendid lights on every street corner. A city that imbues you with the holiday spirit, Moscow is awaiting its annual “Journey to Christmas” season to begin.
Winter Festival of Russia
When thinking of year-end celebrations, there are several performances often considered traditional, such as a Christmas concert by the Little Singers of Paris, a ballet performance of a Christmas story like , and a choir singing “Ode to Joy” from Beethoven’s Ninth Symphony. Despite its harsh winter, Russia holds various festivals and performances at the end of the year. To Russians who have great pride in their classical music and ballet, it is only natural to close the year and begin a new chapter by attending a cultural event.

Fireworks during the festival are can’t-miss events.

In recent years, Moscow, the capital of Russia, has been the venue of concerts, festivals, and performances that take place, one after another. People come out to the streets in the beginning of the year, mid-summer, and yearend to enjoy the merriment offered by the city. Muscovites are known to seek outdoor activities to experience the seasonal splendor of winter that overpowers any sort of illnesses presented by the freezing weather. To them, the Christmas holidays are very important and never to be missed out on. When the lights are switched on at night, in the streets of Moscow covered in snow, a dazzling luminarie unfolds before you.
Christmas Atmosphere in Moscow
Every major square is turned into a venue for plays, circuses, magic shows, and classical performances. For travelers, their romantic vision of spending a Christmas overseas becomes reality for the duration of a month in Moscow. That is how the Russian capital captivated travelers from all around the world for four consecutive years.

A Christmas show by a brass band

The title of the winter festival is “Journey to Christmas.” Launched in 2016, the festival is now the most anticipated year-end celebration by the citizens of Moscow and tourists alike. In 2018, over 18 million people participated in the dazzling seasonal fair. A total of 78 venues hold events from mid-December to mid-January, during which the city turns red due to its colorful lighting and mercury lamps along the streets. Of course there are also those who would turn red after drinking vodka, in excitement over the festivities. 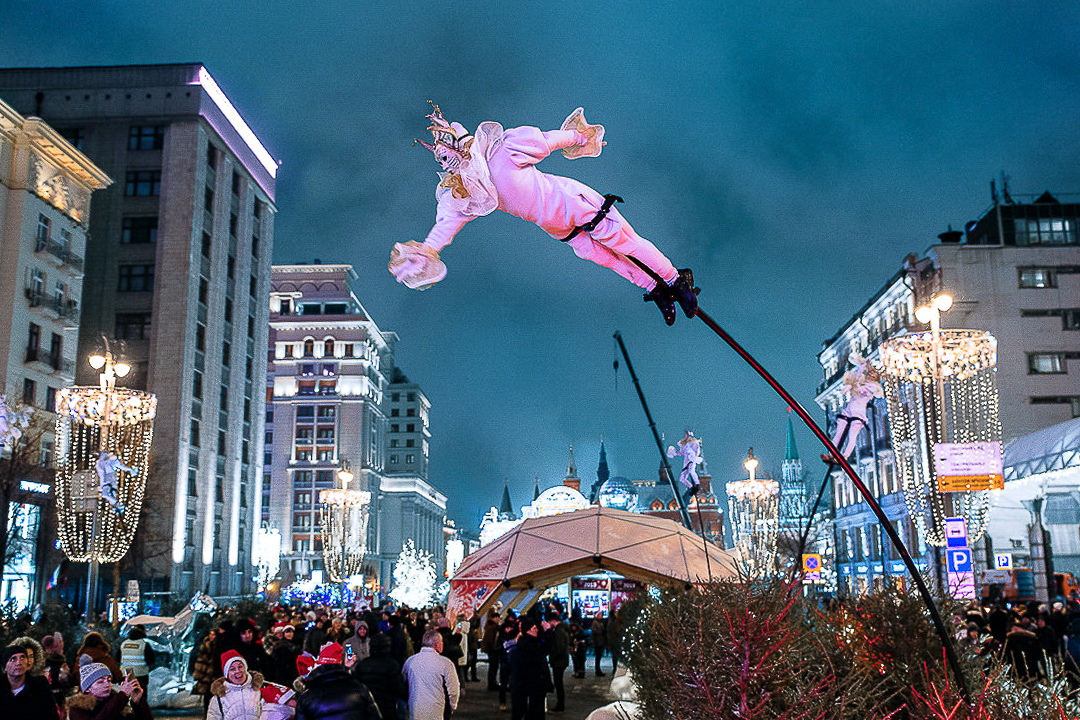 Circus and performances are held all over the streets.

From classical music performances and opera galas to plays, street performances, and circuses, the events lined up for the festival run the whole gamut in the Russian city which lives and breathes culture. A fascinating street parade befitting the theme of each year draws attention. Anybody who wants to participate can rent a costume and join the parade. The outdoor ice rinks present ice skating shows. As part of an effort to cope with the changing times, DJing and hip hop performances are scheduled for the millenials. There are also classes on how to make a traditional Russian accessory for the New Year and cooking classes for a special winter cuisine. 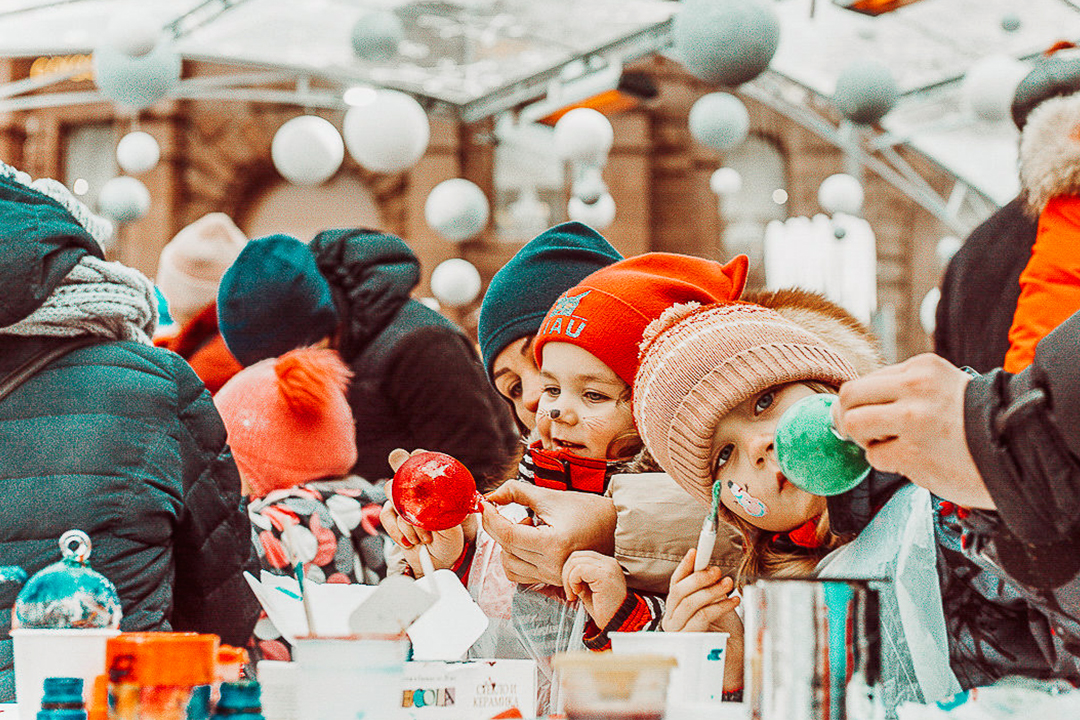 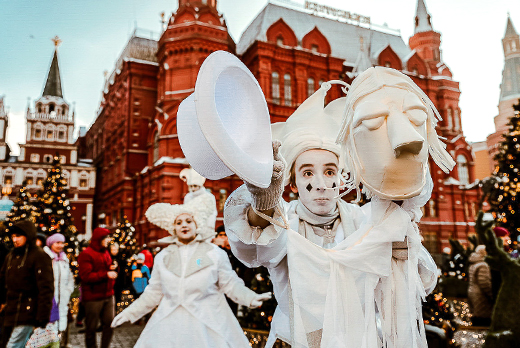 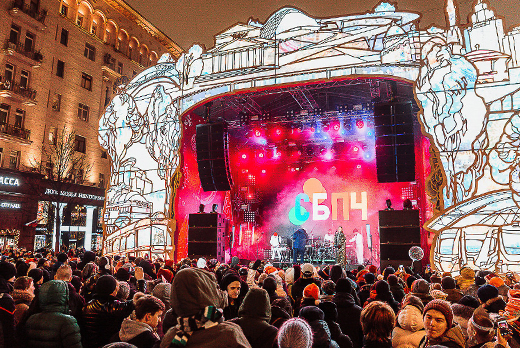 There are plenty of shows and events for children.

Theater Feast in 2018 Moscow
As “Journey to Christmas” established itself as the leading year-end festival in Moscow, the number of visitors to Moscow has also increased. The city government now offers menus or price information at popular restaurants or stores both in Russian and English during the festival. For Russians, known for their pride in Russian language, it is a huge change.
The biggest event of the festival is determined by each year’s theme. In 2018, the theme was “theater.” Characters beloved by the global community and heroes from movies and cartoons popped up across the festival venues. 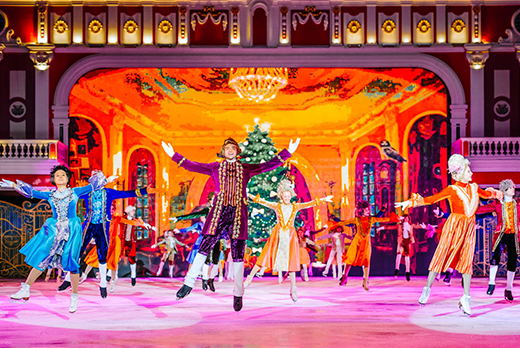 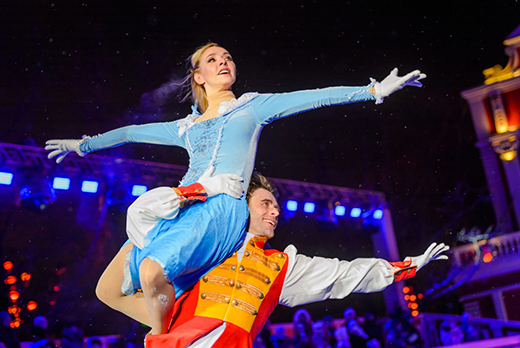 Moscow’s Tsverskaya Square became a stage for famous authors and their protagonists, such as Alexander Pushkin and Yevgeny Onegin; Ernst Theodor Amadeus Hoffmann, the Nutcracker and the Mouse King; Alexander Dumas and the Three Musketeers; William Shakespeare and his numerous characters; and last but not least, Hans Andersen and the Snow Queen. 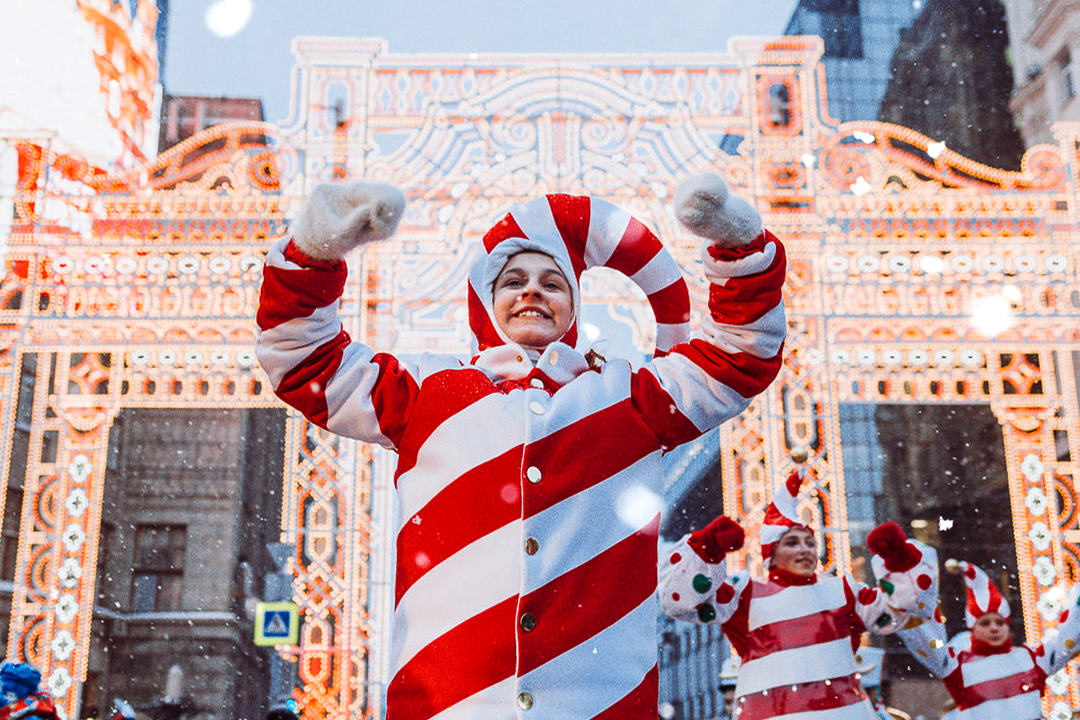 You can see shows by characters from fairytales.

The entire festival area including the streets where open-air events take place was beautifully adorned and lit up. A total of 2,290 performances and concerts and 8,175 master classes were held. A garland running over three kilometers in length, over 100,000 ornaments, and 500 Christmas trees could give you an idea of the scale of the festival. One of the trees was over 20 meters in height. 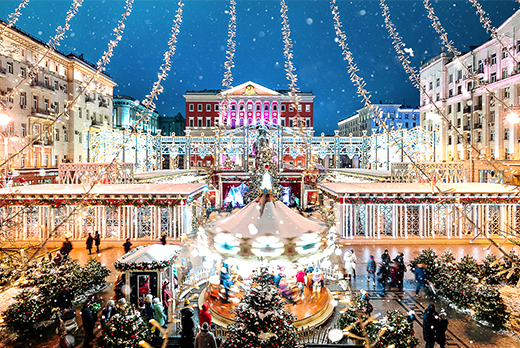 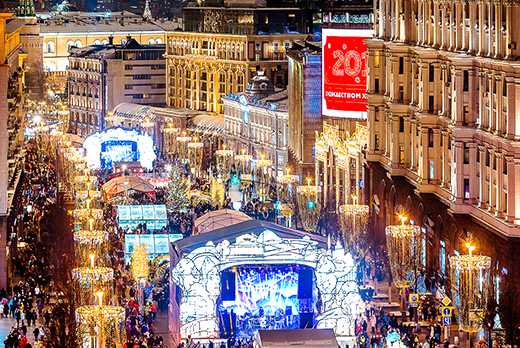 Gorgeous night views at the end of the year.

The outdoor ice theaters are must-visit places for visitors with children. Ice rinks have been installed in Red Square and Pushkinskaya Square. In the evening, fairy tales such as Cinderella, Swan Lake, and Snow White are featured in the form of ice show. Last year, there were 79 ice ballet performances. If other events of the festival are for adults, the ice shows are solely for children.
This year’s “Journey to Christmas” is scheduled from December 13 to January 12, 2020. The festive wind is fast approaching to fill the city of Moscow with a romantic and celebratory atmosphere. 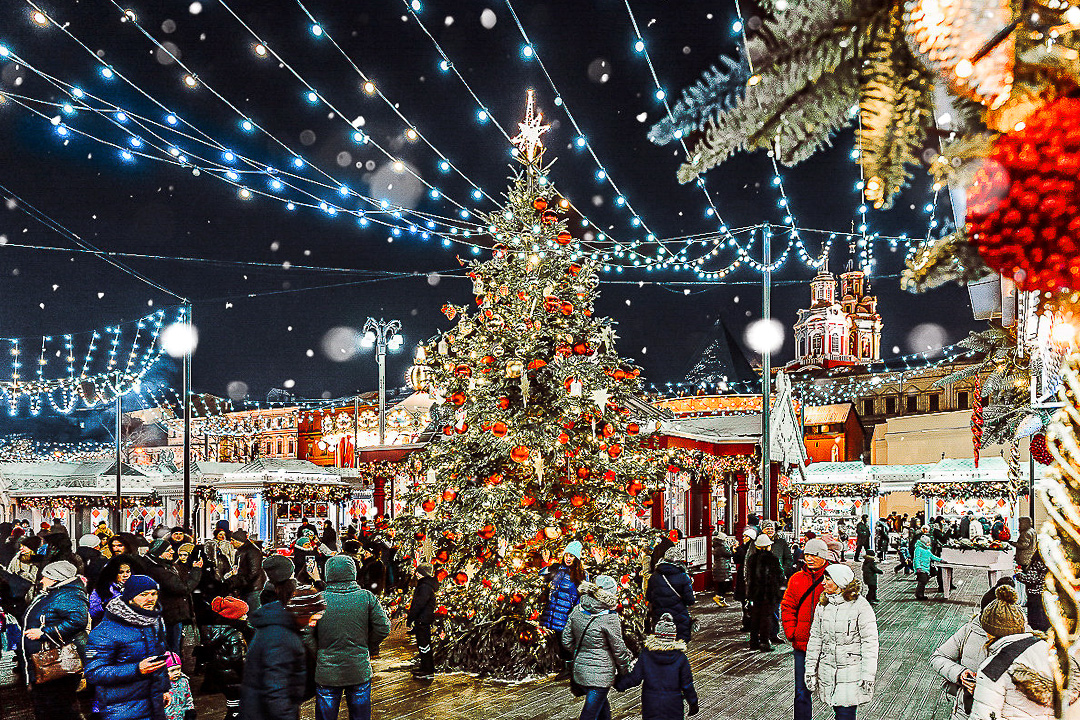 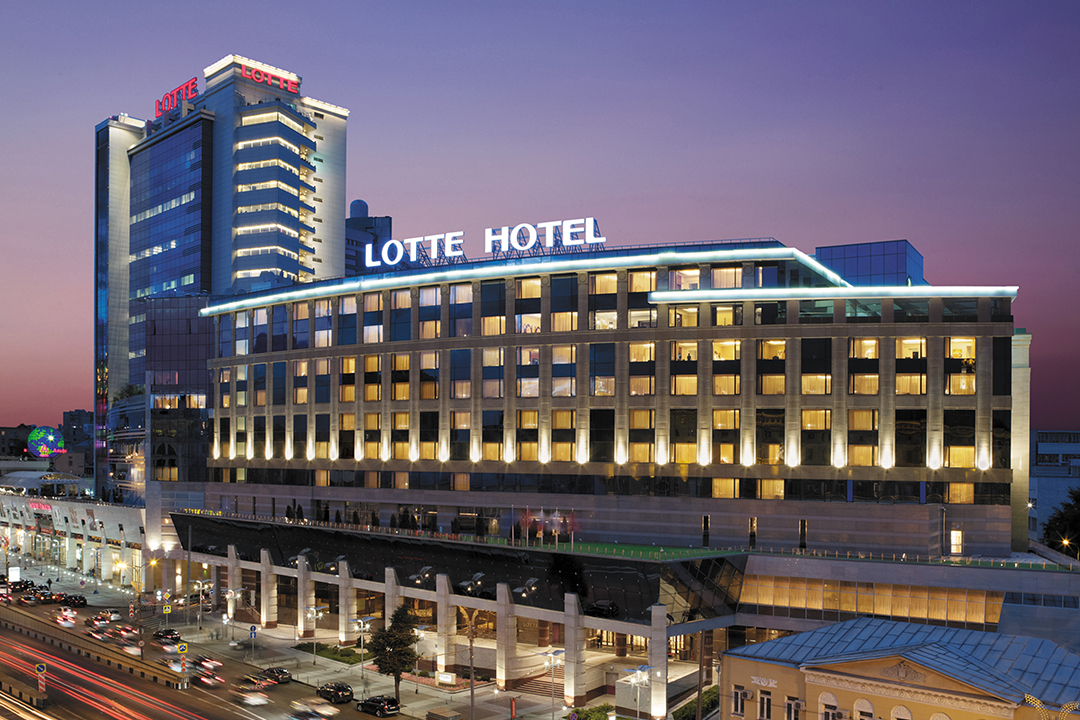 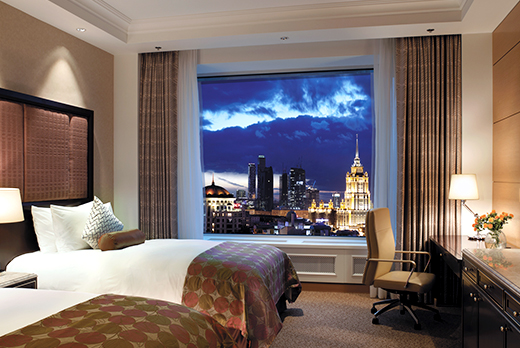 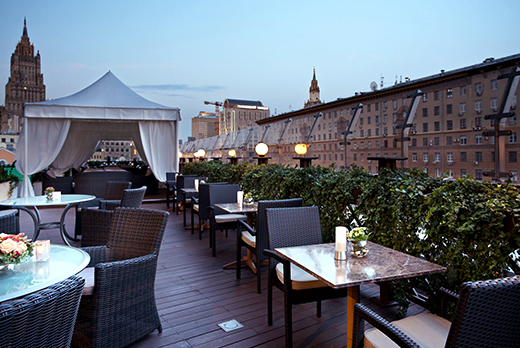 Where to Stay: LOTTE HOTEL MOSCOW
Being the first overseas chain by LOTTE HOTELS & RESORTS and by a Korean hotel brand, LOTTE HOTEL MOSCOW was chosen as Russia’s best city hotel two years in a row by travel magazine . Located on New Arbat Avenue near the Kremlin and the Bolshoi Theatre, the hotel offers 300 guest rooms in its 10-story building on a 7,117㎡ lot, with four stories underground. It presents diverse epicurean options in its four dining facilities, including OVO by Carlo Cracco run by the eponymous, two-Michelin-starred Italian chef and MEGUmi, a New York-style Japanese fusion restaurant.