Invitation to Winter Kingdom of Hallasan
A trip to the peak of Korea to see snow flowers. What is the winter charm of Hallasan?
Many Faces of Hallasan
Jeju Island is young. Korea’s Gangwon Province and Yeongnam region are estimated to have originated 500 million years ago during the Cambrian Period in the early Paleozoic Era. Jeju Island, however, began preparation for its formation only 5 million years ago. A magma chamber formed under the sea floor and began to erupt, becoming the foundation for the island. For the duration of a million years since 1.2 million years ago, occasional volcanic activities took place and the present day Jeju Island was completed. Baengnokdam crater lake is where the magma would spew out on Hallasan, or Mount Halla. In a way, it’s not the highlight of the island, but more like the mother of it. That said, Hallasan can be viewed from anywhere in Jeju. The mountain shows a different aspect of it depending on where you stand. Every season Hallasan puts on new clothes. All four reasons are spectacular, but if urged to pick just one, many people would pick the winter mountain covered in snow flowers. 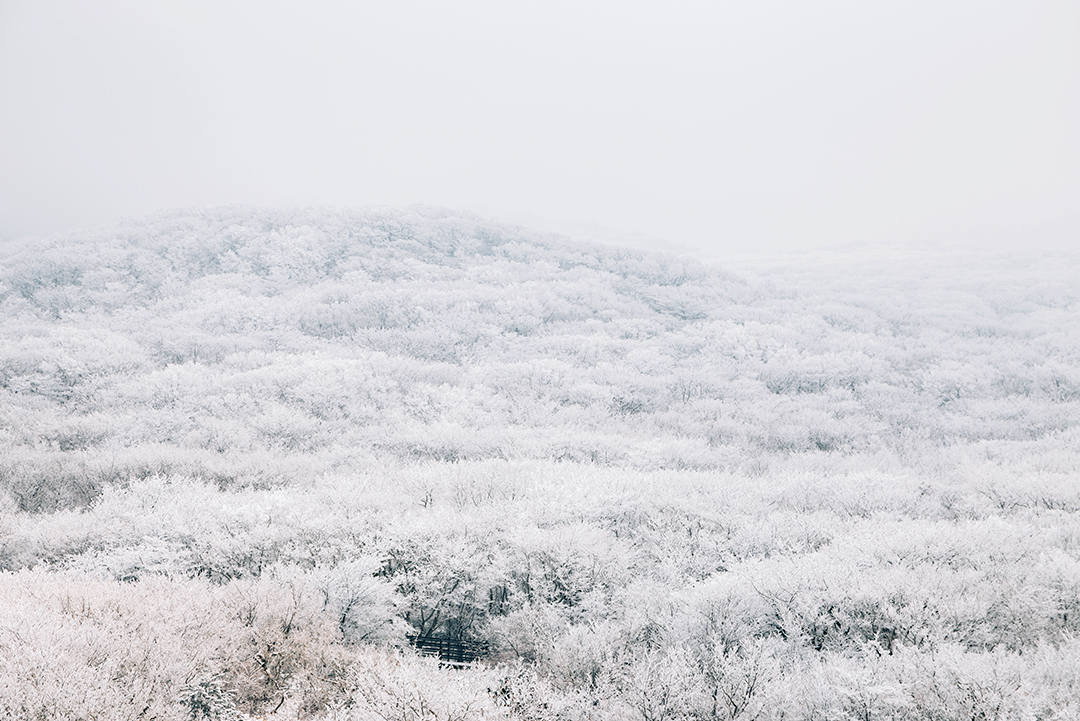 A snow flower refers to the snow covering tree branches. The icy crystals formed on the branches or rocks are called “hoarfrost.” The No. 1 contributor to the glistening winter Hallasan is hoarfrost. Particularly the hoarfrost created by the sudden cooling of dew-drops from the vapor, fog, or clouds in the air is breathtakingly beautiful. In a city or field where the temperature change is not sudden, hoarfrost doesn’t form well. Rather, it often appears in winter on a mountain with a long stretch of ridge with nothing surrounding to block the blowing wind. Hallasan, at 1,950 meters above sea level, is the tallest mountain in Korea and sits on an island where nothing obstructs the wind. In other words, it’s the most perfect place to see a lot of hoarfrost. The winter magic begins in November in Jeju. 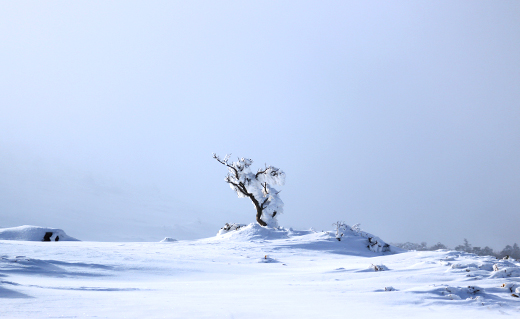 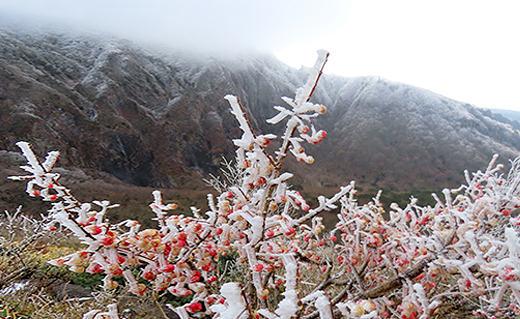 Leading to Baengnokdam, Seongpanak or Gwaneumsa Trails
Hallasan is exactly 1,947.269 meters tall. On the mountain top is Baengnokdam crater lake with a circumference of 3 kilometers and a diameter of 500 meters. The mountain stretches from east to west. The slope of the trails on either side is gentle because of the distance between the center and the foot of the mountain. Anybody who doesn’t mind walking can reach the summit. It’s not to say climbing Hallasan is easy as its distance and height are still challenging. But the biggest merit of Hallasan is that even children can walk to the summit if they are patient. The mountain trails are well maintained. Winter mountains are beautiful but could be dangerous if not kept up properly. Jeju Island, which is the No. 1 tourist destination in Korea, takes special care of the trails in Hallasan National Park, the seventh national park in Korea, allowing an easy access to the tallest mountain in the country. Compared to those on Seoraksan or Jirisan, Hallasan trails are safe and wide enough for a family to hike together. Near deulmeori(trailhead), the trail is embedded with small stones, making people to take cautious steps, but before long the plank-decked trail begins. Hallasan is not a mountain where you have to balance yourself between huge boulders. (Unofficial routes are exceptions.) You don’t even have to search for the right course. If anything, people get bored with safe courses. But when it snows, the stair parts of the trails become gentle slopes covered with snow. The pleasure of stepping on crisp snow adds to the winter atmosphere of Hallasan. 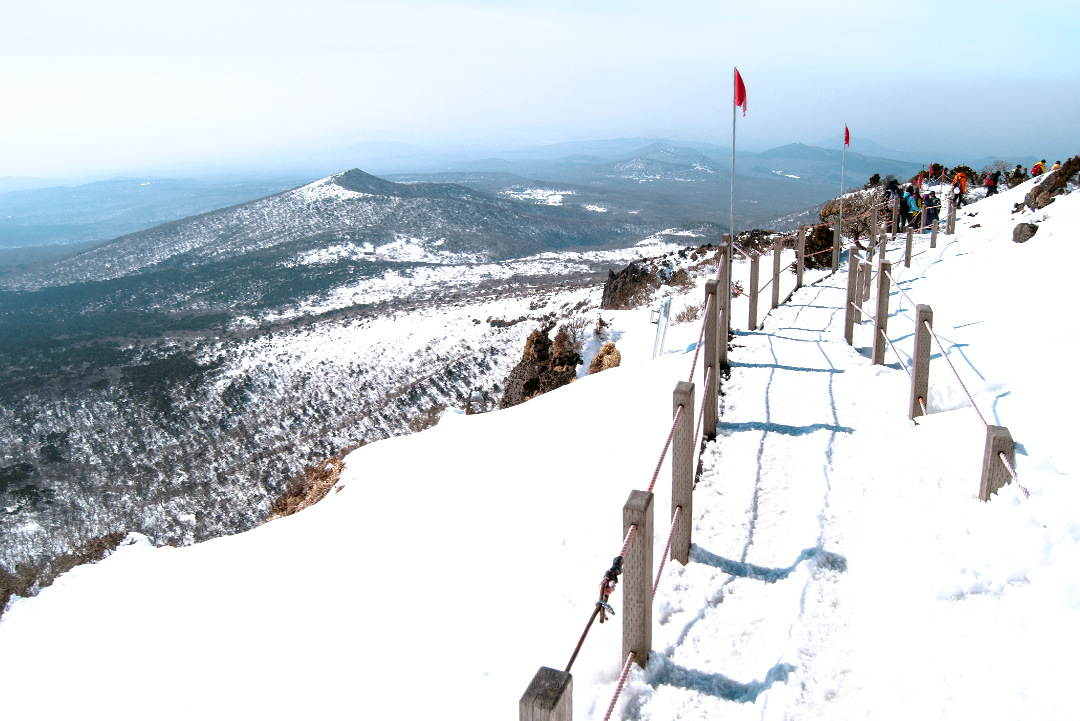 The official hiking courses of Hallasan are Eorimok, Yeongsil, Seongpanak, Gwaneumsa, Donnaeko, Eoseungsaengak, and Seokguram trails, depending on deulmeori. Among them, only two trails of Seongpanak and Gwaneumsa can get you to Baengnokdam at the peak. It means there are only four ways to make a round trip to Baengnokdam, with two ways to go up and two ways to come down. If you parked a car before going up, you have to return via the same route for the car. Otherwise you can leave from Seongpanak and end at Gwaneumsa, or the other way around. There are pros and cons. From Seongpanak to Baengnokdam, it’s 9.6 kilometers long, requiring an estimated 4.5 hours on foot. If you depart from Gwaneumsa, it’s 8.7 kilometers long, a bit closer to the summit, but it’s a more challenging trail which requires an average 5 hours. The biggest advantage Seongpanak Trail has is that it’s an easy course. If you are accompanying a child, you’d better choose the Seongpanak Trail. Suitable for some quiet time and conversation, the trail goes through a broadleaf forest, but does not offer an open view. To some, it may feel boring. 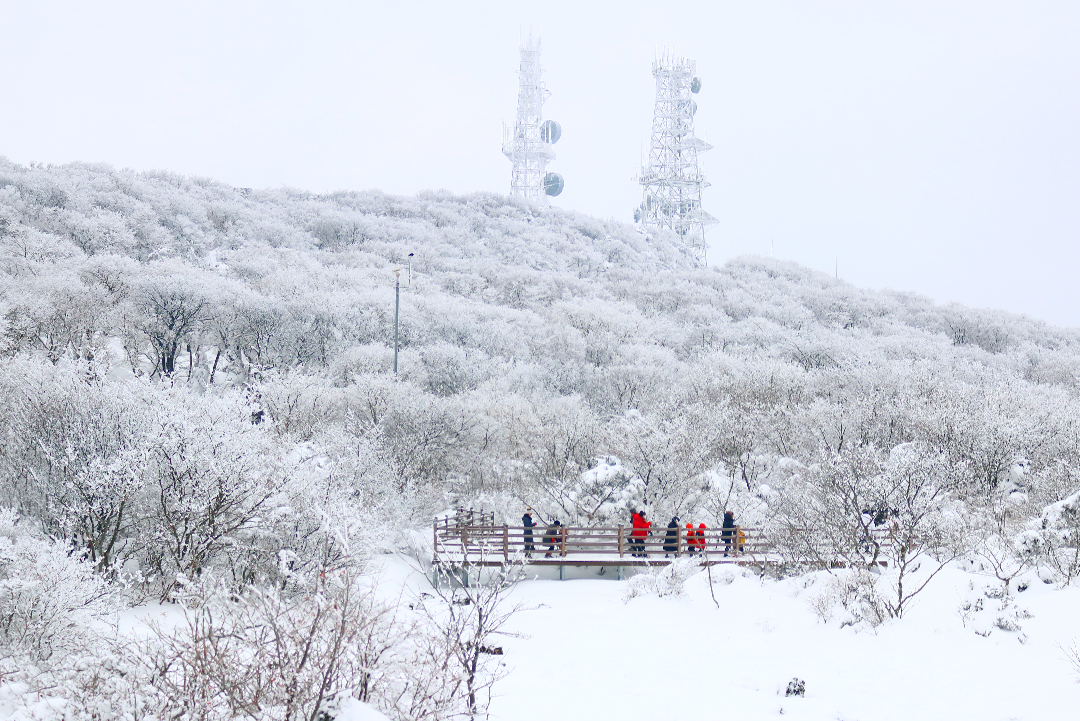 If you choose the Gwaneumsa Trail to go up, the pros and cons are the opposite of Seongpanak. It’s a bit steeper so it takes more effort, but it’s not dangerous. The trail also offers a great view. On the Seongpanak Trail, you will pass Sokbat Shelter about 4.1 kilometers in, while on the Gwaneumsa Trail, you have to hike 6 kilometers to reach Samgakbong Shelter. It’s hard to find public restrooms, so keep that in mind before departure. There’s also no food vendor within Hallasan National Park. It takes 8-9 hours to and from Baengnokdam, so you must have some food and drinks ready. We recommend bringing a Thermos with warm water in it. Walking uphill in winter, you might sweat without feeling cold but the water inside a plastic bottle could freeze. 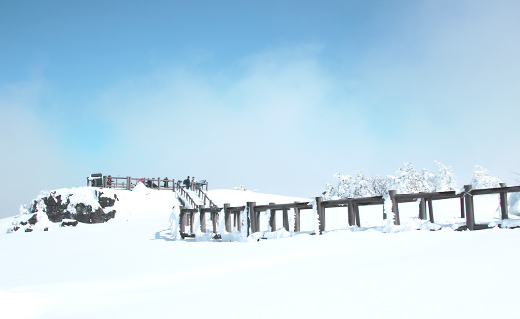 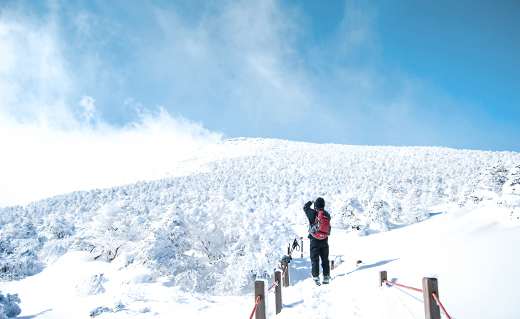 Lake in Woods, Sara Oreum in Jeju
Local people in Jeju Island or frequent hikers of Hallasan do not insist on conquering the 1,950-meter-high summit and Baengnokdam. As previously mentioned, Jeju Island was created by volcanic eruption. It naturally has a lot of hills and mountains formed during the cooling of lava. They are called “oreum” in Jeju. There are no clear criteria to define oreum. Jeju Island is believed to have over 370 oreums, and some say 386 to be exact. Forty of them are found in Hallasan National Park. Sara Oreum, located near the Seongpanak Trail, was the first oreum revealed to the public since Hallasan became a national park. At 1,324 meters above sea level, Sara Oreum is called “Little Baengnokdam.” As you can guess from its nickname, Sara Oreum is a lake formed in a volcanic cone. Two hours into the Seongpanak Trail, you’ll see a road sign that says “Entrance to Sara Oreum.” From there, it is about 600 meters to oreum. It’s a short, but decked path of stairs from beginning to end. You need to go up, and up, and up some more. In winter the path gets hidden under snow but you can grab onto the handle ropes for guidance and support. Going uphill, you can enjoy an open view of the mountain, unlike on the Seongpanak Trail. There is a small lake with a circumference of 250 meters on Sara Oreum. From the observation deck across the lake, you can see Baengnokdam summit on one side and Seogwipo and the ocean on the other side. Some people say that Baengnokdam gives you a sense of achievement due to the fact you’re standing on the highest spot in Korea. Others say the panoramic view from Sara Oreum is far superior to what Baengnokdam offers. 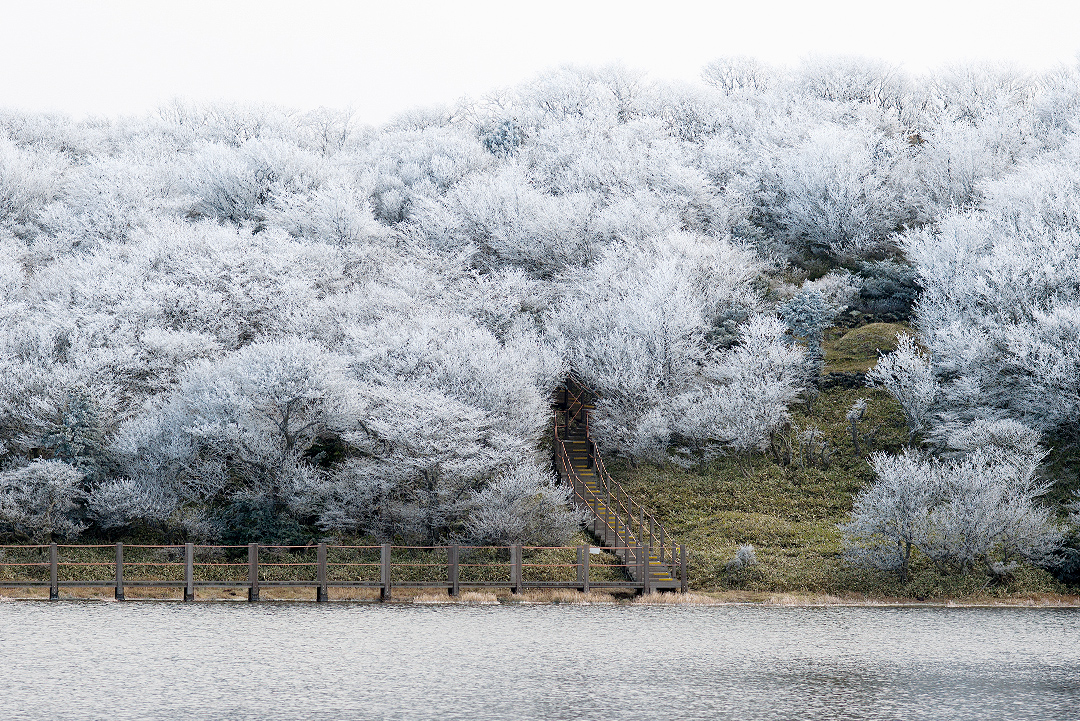 There’s More Than Baengnokdam. Witse Oreum and South Cliff Junction
If the Gwaneumsa Trail in the northeast of Hallasan and the Seongpanak Trail in the east are for Baengnokdam, the Donnaeko in the south, the Yeongsil in the southwest, and the Eorimok in the northwest are for Witse Oreum at 1,700 meters above sea level. The Donnaeko Trail, originated in the upper Donnaeko Valley in Seogwipo, comes to a stop at South Cliff Junction at an altitude of 1,600 meters. The distance is about 7 kilometers and it takes an estimated 3.5 hours on foot. The junction clearly shows the steep descent of the south side of Hallasan. From the junction, take the South Cliff circular trail to get to Witse Oreum.

If you want to enjoy Witse Oreum and the South Cliff, we recommend going up the Eorimok Trail and taking the Yeongsil Trail on the way back. If the hiking begins on Yeongsil, there’s a long walk up on the asphalt-paved road in the beginning. It’s still quite a steep hike even after the decked path begins. Yeongsil is a valley, situated 1,600 meters southwest of Baengnokdam. A 350-meter-deep valley encompasses 2 kilometers featuring odd-looking volcanic rocks. Found on the eastern side of the valley, some 500 rock pillars along the ridgeline are called Yeongsilgiam, or Obaengnahan. To the west you can see the magnificent Byeongpung Bawi, a jumble of 2,000 rocks. If you choose the Witse Oreum course, you can have a special experience of walking on Seonjakjiwat, the only plains at an altitude in Korea, from South Cliff Junction.

The Eoseungsaengak Trail stretches to Eoseungsaengak Oreum at an altitude of 1,169 meters, and the Seokguram Trail to Seokguram Temple. They are only 1.3 and 1.5 kilometers long respectively, unsuitable for a hiking course to see the snow-covered mountain. 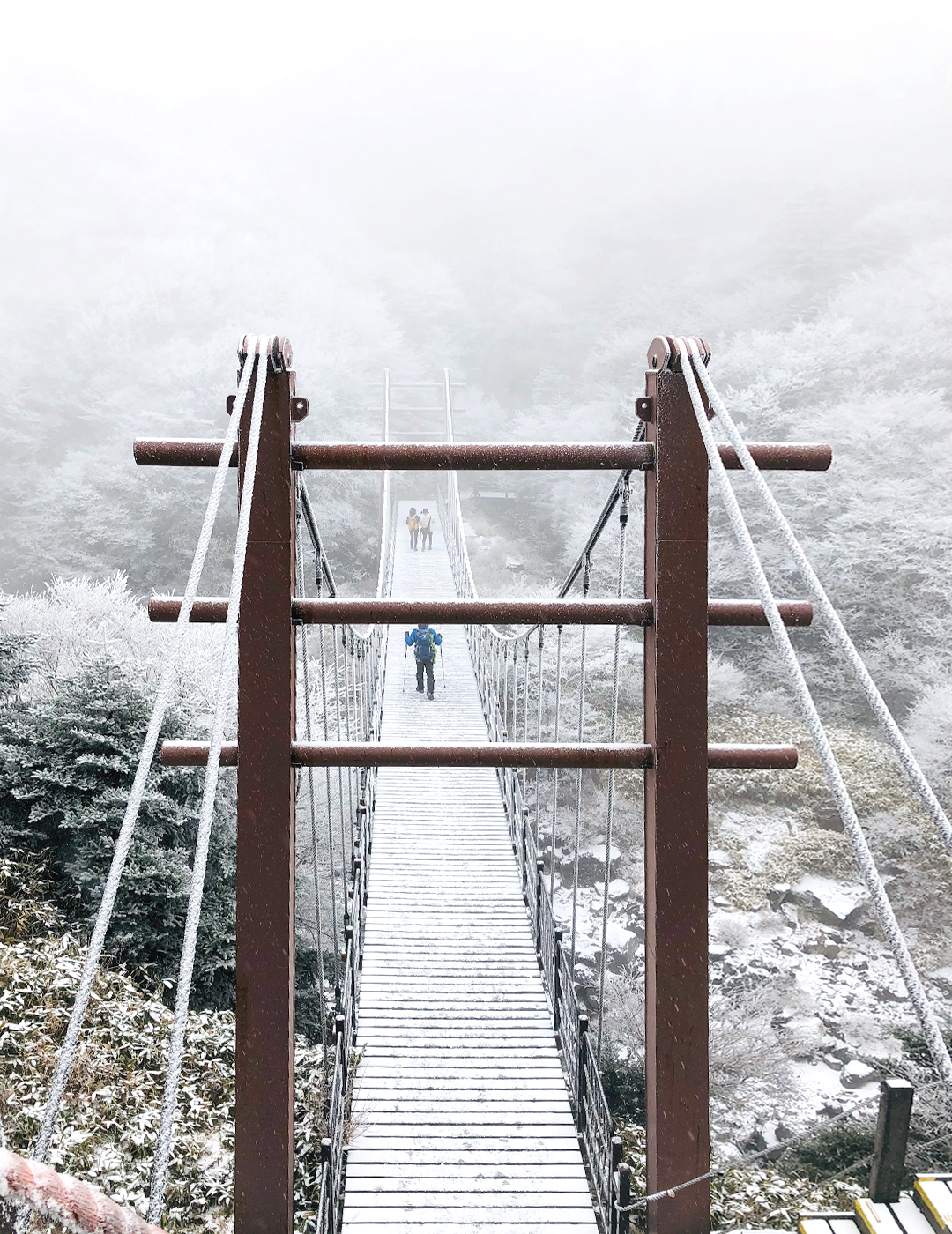 Hallasan has gentle slopes despite its height, making it easy for anybody to try hiking for pleasure. However, it doesn’t mean the mountain isn’t a dangerous place in winter. Make sure to bring Eisen and hiking sticks, and additional layer of clothing for a weather contingency. Heat packs are a good idea. Unnecessary items will only slow you down, so think about what to keep and forgo.

If you’re aiming for Baengnokdam, it takes 4-5 hours of hiking up and a similar amount of time coming down. It’s a long trip about 9-10 hours in total. Hallasan National Park has established entry cut-off times. In winter, the cut-off is earlier than in other seasons. If there’s a blizzard or strong winds, the park may restrict entry. In areas including Witse Oreum and South Cliff Junction, weather changes could be drastic. You have to check the cut-off times for the trails and weather conditions beforehand. All of this information and more detailed introductions on the trails are available on the Hallasan National Park homepage.
Hallasan National Park
Address 2070-61(Haean-dong) 1100-ro, Jeju-si, Jeju-do
Inquiry +82-064-713-9950
Homepage www.jeju.go.kr 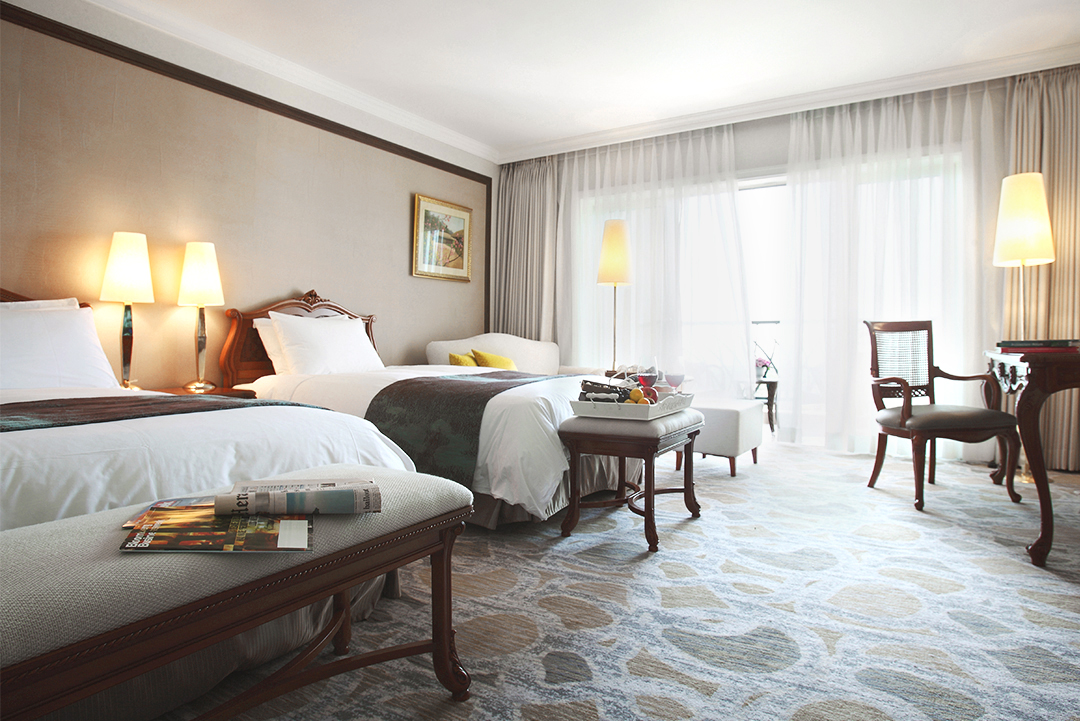 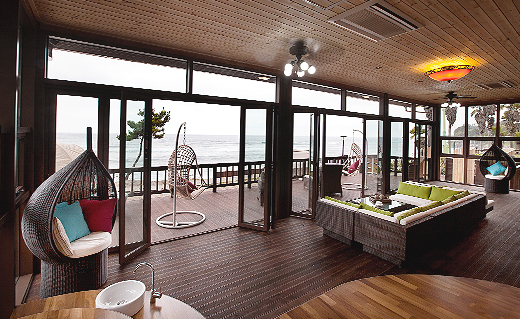 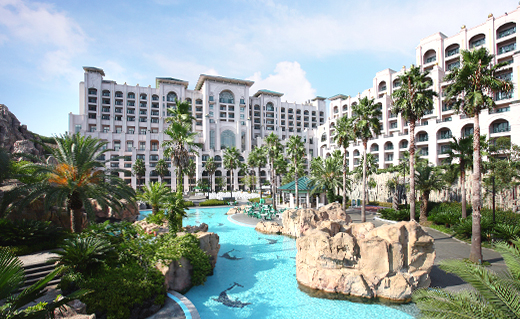 Where to Stay in Jeju: LOTTE HOTEL JEJU
Located in the Jungmun Tourism Complex in Jeju Island, LOTTE HOTEL JEJU is a resort hotel with 500 guest rooms. Inspired by “Palace of the Lost City” in South Africa, the hotel presents an exotic atmosphere that mingles well with Jeju’s natural environment. With eight restaurants, lounges, and all-season outdoor spa pools, it is a popular choice for families and couples.