In Search of True Soul Culture, Visit Harlem
“Black ghetto” is an archaic expression. The Harlem Renaissance has come back. Watch jazz performances from day to night and taste soul food in Harlem.
After World War I, as the American labor market expanded, the African-American population moved en masse(the Great Migration) from the southern agriculture region to northern or midwestern cities. This resulted in the creation of a new intellectual class within the black community. New York’s Harlem in the 1920s was the center of artistic and cultural explosion and became an area symbolizing black culture. The Harlem Renaissance, encompassing all areas of art, including music, literature, and dance, ended abruptly due to the Great Depression, which damaged the movement ethnically, culturally, and regionally. Today, as the historic nostalgia grows and the cultural sensibility of African Americans re-emerges as a topic of interest, the Harlem Renaissance is entering its second heyday. 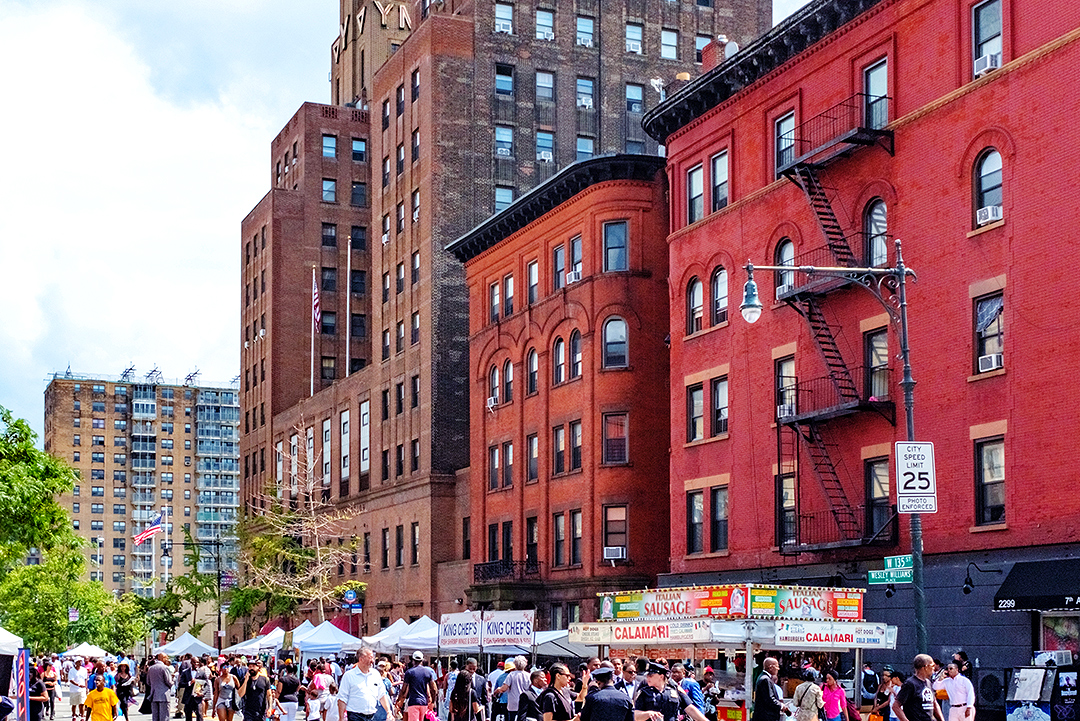 Harlem covers the area between 116th and 155th streets in Manhattan. Malcolm X Boulevard connected to the Central Park North divides Harlem largely into West Morningside Heights where Columbia University is located and East Spanish Harlem mostly populated by Puerto Ricans. Once considered a crime-ridden district with frequent violence and drug-related crimes, Harlem is currently witnessing the formation of a unique culture. The change is taking place as urban development continues and young New Yorkers move to Harlem to avoid gentrification of the city. African Americans still make up the majority of population in Harlem, but more immigrants from countries like the Netherlands, Puerto Rico, and Dominican Republic are settling down, turning Harlem into a smaller version of “melting pot” New York.
Part 1. Meet Soul Culture
Words often associated with African-American culture, such as jazz, soul food, graffiti, and gospel, are energetic, yet soft; sensual, yet elegant; and bold, yet exquisite. The ethnic sensibility rooted in black supremacy has ripened into a unique local culture in Harlem, constantly inspiring people visiting the town. Here’s a list of entertainment in Harlem where jazz music is played from day to night, and weekdays feel like weekends. 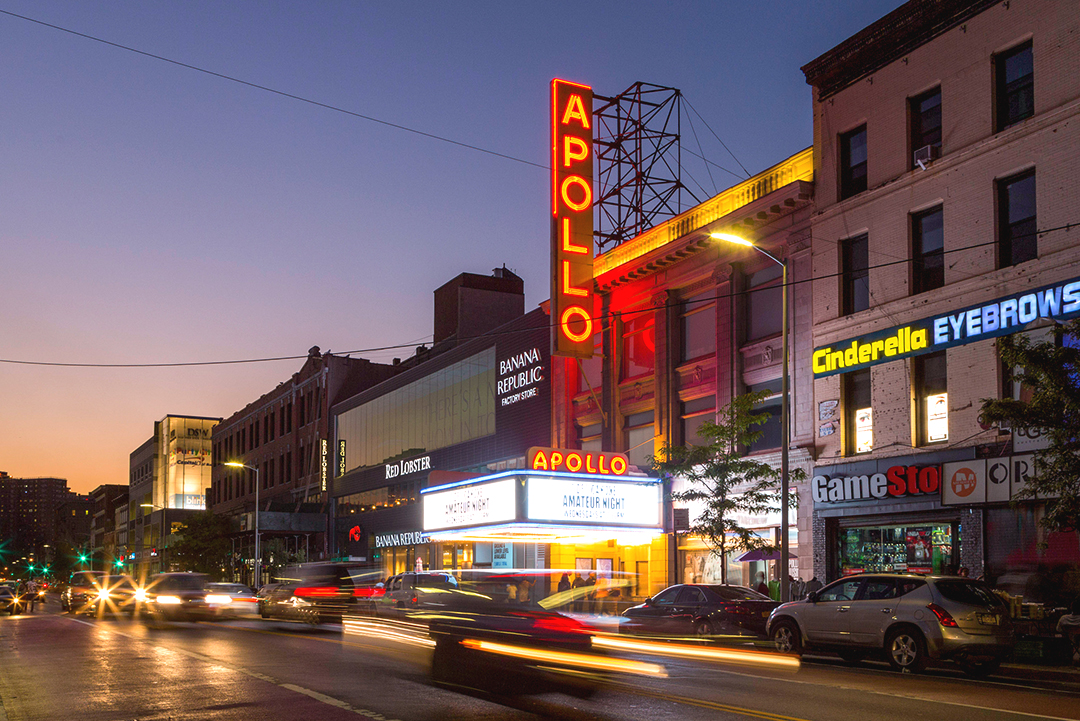 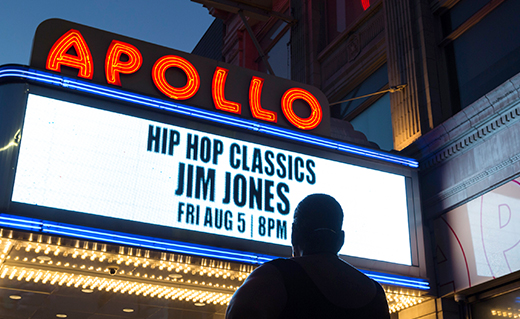 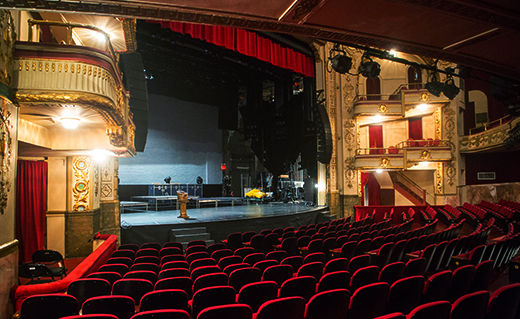 1. Apollo Theater
If downtown Manhattan has Blue Note, Harlem has the Apollo Theater. Featuring music of various genres including jazz, swing, R&B, blues, soul, gospel, and hip-hop, the place is the mecca of African-American music. The Apollo Theater became famous for “Amateur Night” which began in 1934 and served as a gateway to success for black singers. Ella Fitzgerald was one of them. Designated as a New York City Landmark in 1983, the Apollo Theater has produced numerous musicians including James Brown, Sammy Davis Jr., and Billie Holiday, and is also known as Michael Jackson’s first stage as one of the Jackson 5 at age nine and as the venue for his memorial service after his death. The interior of the theater maintains the 1940s’ glamorous style with red velvet seats and a restored chandelier, while the exterior incorporates a classic terracotta-style façade on top of which a neon blade sign hangs and lights up Harlem in the evening. Amateur Night opens every Wednesday at 7:30pm. Make sure to check the performance schedule on its website and make an advance booking.
Address 253 W 125th St., New York
Homepage apollotheater.org

2. Bill’s Place
In the 1920s, prohibition led to the prevalence of speakeasy bars selling alcoholic beverages without a signboard. Bill’s Place is one of them. The dark interior space is so small that you may bump your elbow with the one standing next to you. On weekends, the place is even more packed due to the performances by local musicians. If you’re very lucky, you’ll get to listen to the performance by Bill Saxton who owns the place and is a world-class saxophone player.
Address 148 W 133rd St., New York
Homepage billsplaceharlem.com

3. Cecil Steakhouse & Minton’s Playhouse
Jazz concerts are not just limited to evenings or nights. The Cecil Steakhouse, in business since 1938, is a perfect place to relish the weekend brunch while listening to the soft tune of jazz music. At Minton’s Playhouse, known as the birthplace of bebop, order a signature cocktail of the day to enjoy while familiarizing yourself with the bebop rhythm. The two are located in the same building.
Address 210 W 118th St., New York
Homepage thececilharlem.com, mintonsharlem.com 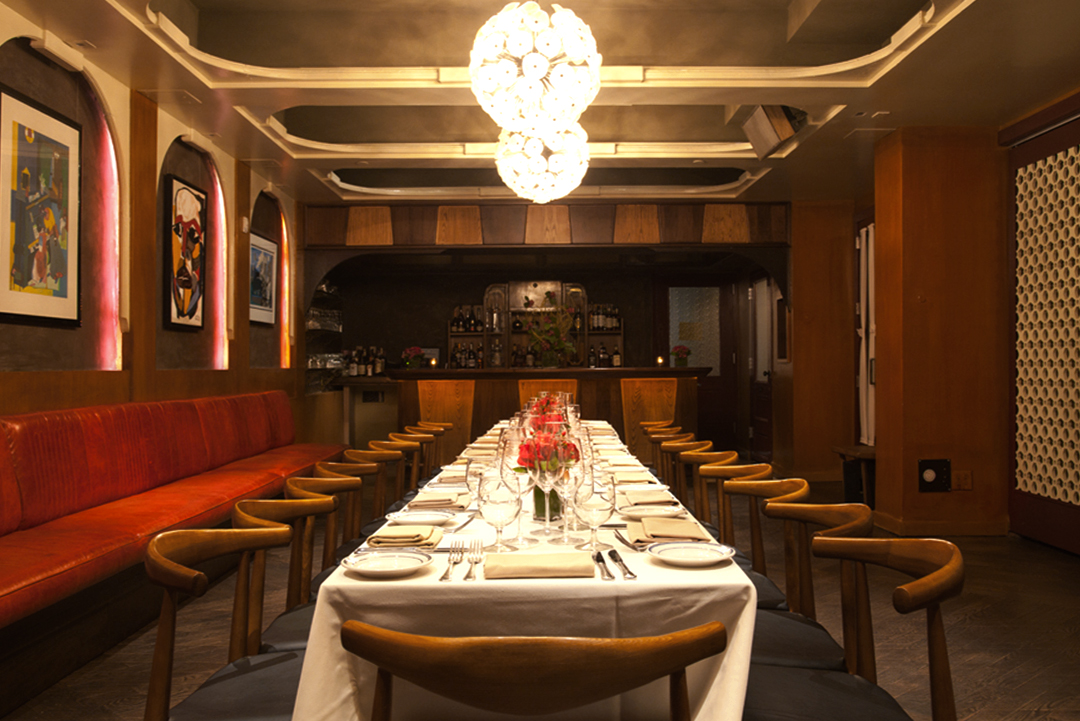 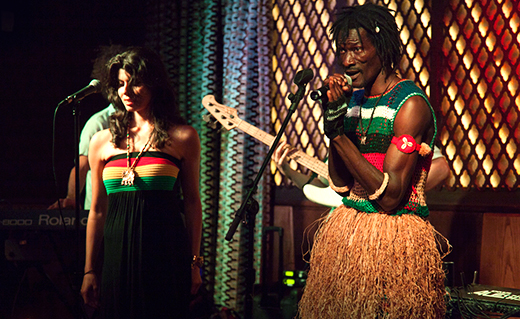 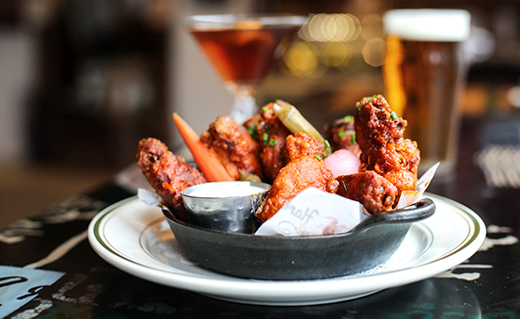 5. Silvana
A cafe and boutique by day, and a basement speakeasy bar by night. Silvana can’t be defined in one way and always offers diverse events. The stage set changes every time depending on whether a local band is performing or if it’s an open-mic session. The recommended menu is the Mezze Platter served with five different salads with Middle-Eastern culinary signature Pita bread.
Address 300 W 116th St., New York
Homepage silvana-nyc.com

6. Awash
Awash is an Ethiopian homemade-style restaurant located on Harlem’s Amsterdam Avenue. Its modest interior gives you comfort, and their food tons of flavor. Their menu includes soft crepe-type flatbread injera, made out of teff flour, and a variety of healthful grains and veggies to eat with the bread. You can do your body good with this special dining experience.
Address 947 Amsterdam Ave, New York
Part 2. Discovering Different New York in Harlem
Away from Midtown crowded with tourists, look for the scenes of New York that are different from the ones you’re already familiar with, by watching the sunset over the Hudson River or discovering hidden attractions near Central Park. 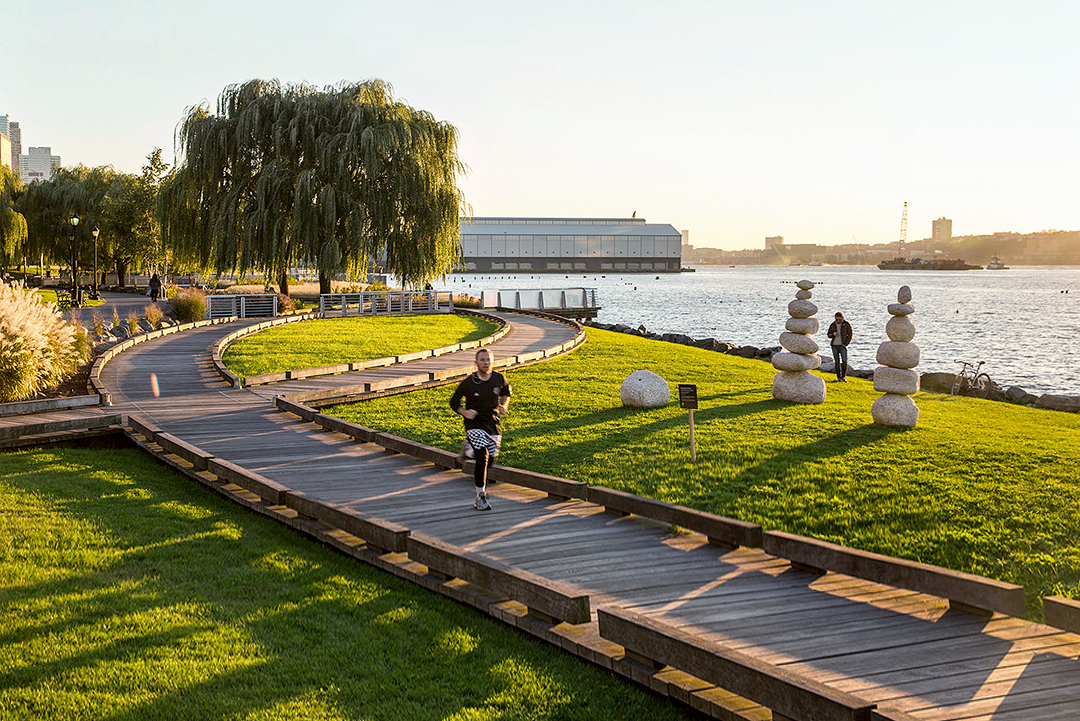 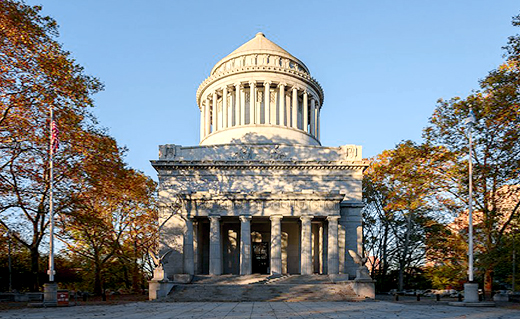 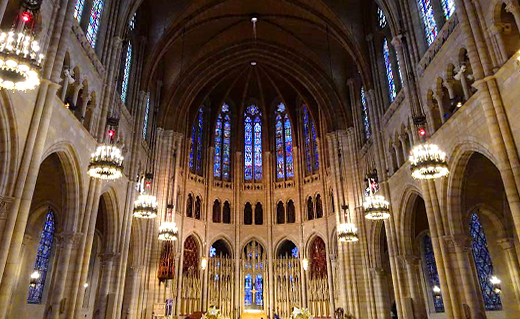 Inside the Riverside Church © NYC & Company

1. Views from Morningside Heights, West Harlem
If the weather is nice, stop at 113th Street, walk along Riverside Park, and check out the campus of Columbia University on 125th Street. In Spring, the cherry blossoms at the park is greater than any other place; in summer, you can have a relaxing weekend as you watch people come out and grill barbeques with their families, enjoying a light jogging, or tanning in bikinis. Make sure you don’t miss out on New York’s sunset and night scenery you can have by the Hudson River. In winter even a blizzard seems romantic against the backdrop of lights from Columbia University’s library at night. 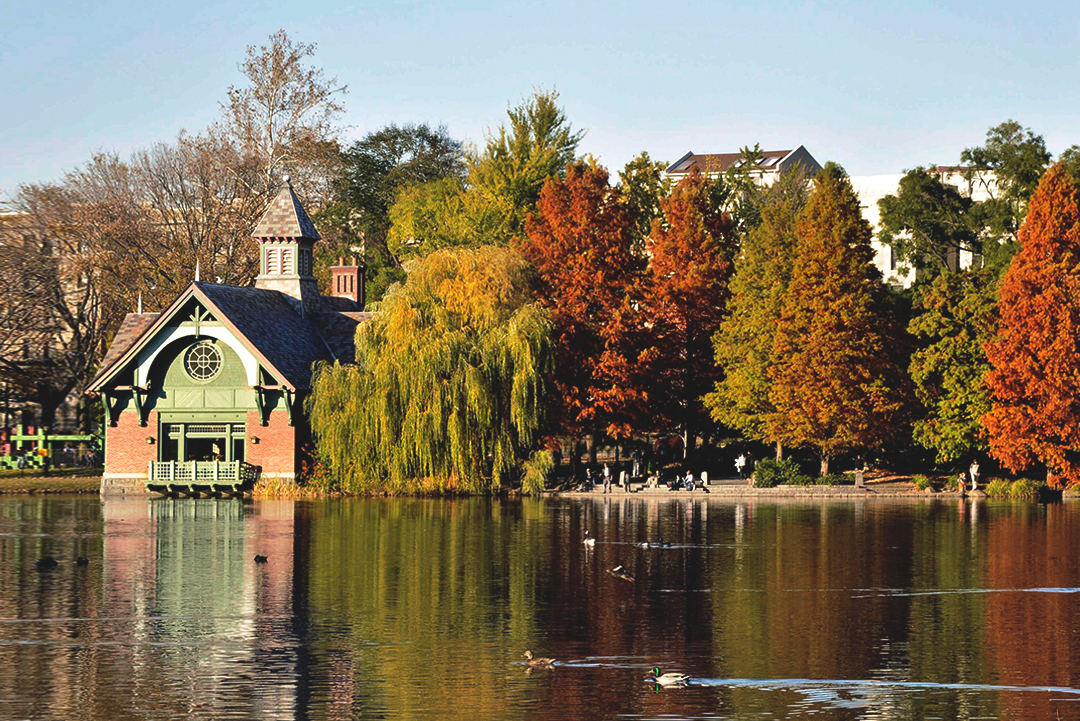 2. Nature in Central Park and Harlem
Rent a bicycle near Central Park, Midtown and tour around the expansive urban garden. The main route goes up north on the east side and comes down south on the west side. You can find a little hidden treasure of Central Park, Lake Harlem Meer, by going way past 110th Street heading north. You can get a boat ride or engage in fishing. In early autumn, the surrounding trees whose leaves have fallen create tranquil, picturesque views of the buildings by the park. It’s yet another look of New York.

3. Museum Mile and East Harlem
On a section of the Fifth Avenue called Museum Mile, east of Central Park are some of New York’s leading museums including the Guggenheim, Metropolitan Museum of Art, and Neue Galerie New York. El Museo del Barrio, located near the northern end of Museum Mile, deals with Latin American culture with a focus on Puerto Rican and Carribean art. Through various festivals held each season, you can experience the vivacity of Spanish Harlem. At the National Jazz Museum in Harlem in Midtown offers a survey into the history of jazz through its media library and Ralph Ellison exhibition, and presents an opportunity to experience jazz more closely through live performances. 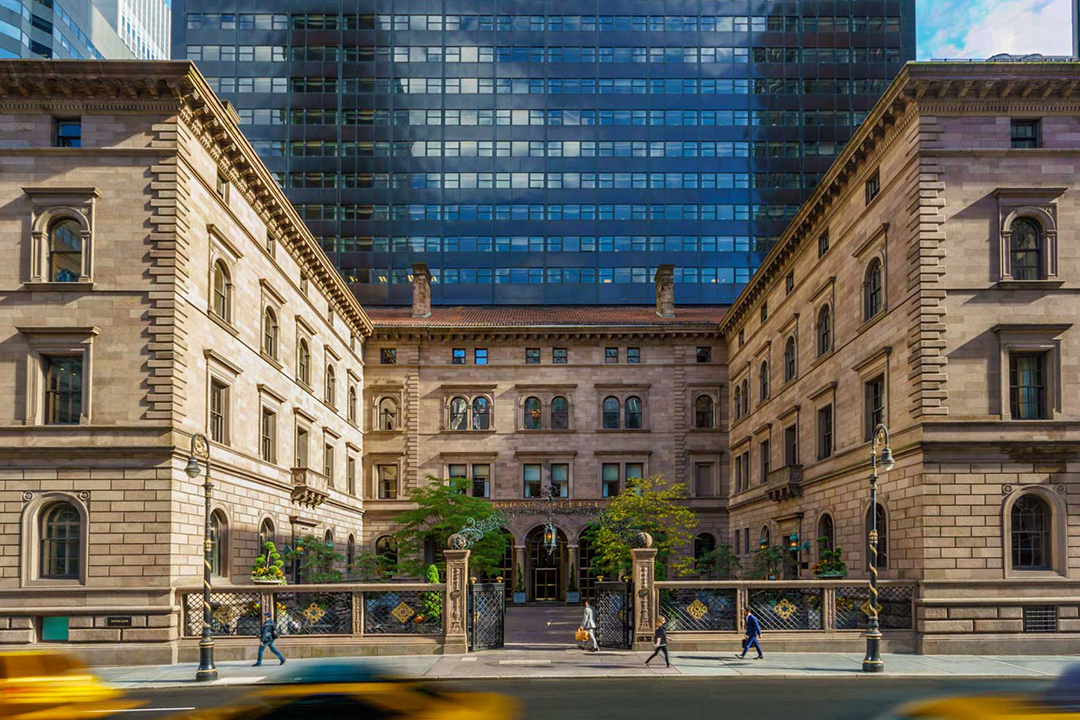 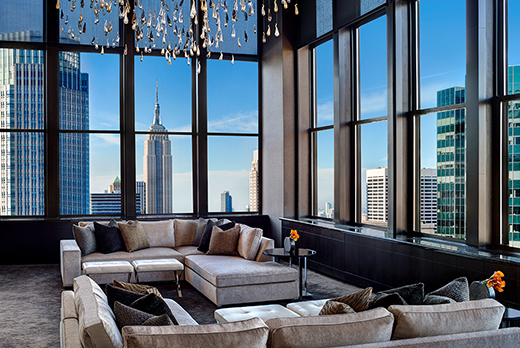 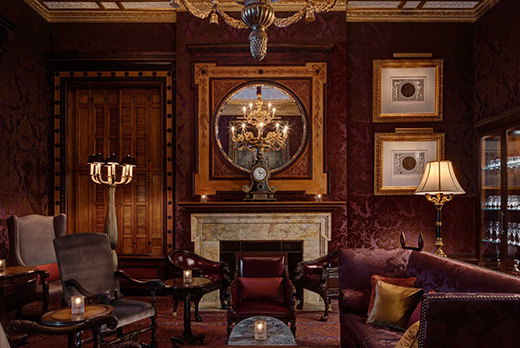 Where to Stay in New York: LOTTE NEW YORK PALACE
LOTTE NEW YORK PALACE is comprised of a 19th-century mansion built by financier Henry Villard and a modern 55-story skyscraper. With its appearance on various movies and TV series, including “Gossip Girl,” the hotel has emerged as one of the must-see places for tourists visiting New York. There are a total of 909 guest rooms with multiple dining options and bars including Villard Restaurant, offering a breakfast menu using locally-grown ingredients, high-end salon Rarities, and cocktail bar Trouble’s Trust.
Address 455 Madison Avenue at 50th Street, New York
Phone +1-800-804-7035
Homepage www.lottenypalace.com