[DAYTRIP] Vladivostok, where the beauty of East and West combined
Russia’s Vladivostok could be considered the closest part of Europe to Korea. Just a two-hour flight takes travelers to this eastern outpost where they can enjoy Western and Oriental beauty.
It’s been only about 150 years since Vladivostok became a part of Russia. During the Opium War, Russia allied with England and France. As a result, in 1860, Russia was ceded large amounts of land in the Maritime Provinces, including Vladivostok, from the Qing Dynasty. Russia hoped to advance to the ocean by using the two port cities - St. Petersburg in the East and Vladivostok in the West. From Imperial Russia to the Soviet Union and modern-day Russia, a lot of effort has been put into developing Vladivostok. As a result, Vladivostok has various attractions like a military port, commercial town, trade in the Far East and many more. 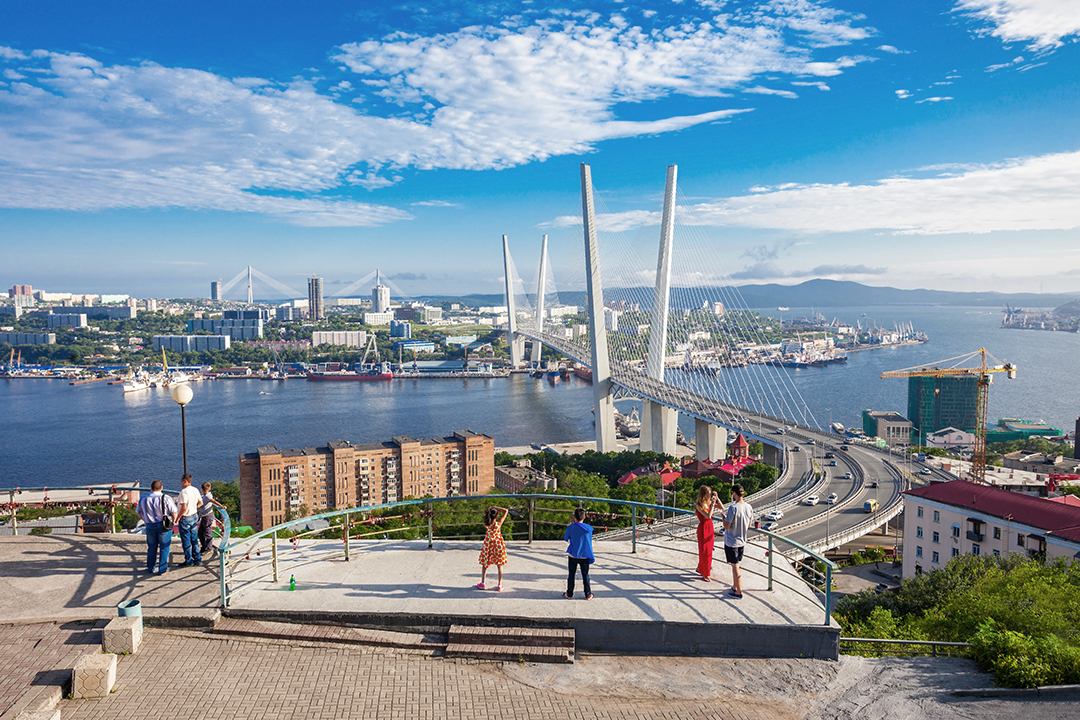 [12:00 PM] Eagle’s Nest Mount
Vladivostok is the biggest city in the Far East of Russia but in terms of population, it’s only home to about 600,000 people, similar to Anyang, Gyeonggi in Korea. Since the central part of Vladivostok isn’t that large, it’s a great place to explore on foot. As the name Eagle’s Nest Mount suggests, this party of town is very hilly and is likely to be the most challenging part of your walking tour.
Vladivostok International Airport is about 50 minutes from downtown Vladivostok by cab. There is an airport railroad but taxi may prove more convenient. If you do take the cab, consider stopping at Eagle’s Nest Mount on the way to get a good view of the entire city.
As you can see Golden Horn Bay and the Russky Bridge, it’s also the perfect spot for a photo. Even locals climb up Eagle’s Nest Mount to enjoy the view of the city, so the best spot (there’s only one, you can’t miss it) always has a queue. You can also see the monument to the creators of the Slavic alphabet, Cyril and Methodius. At tourist sites like Eagle’s Nest Mount, you can easily get a cab but they may rip you off so you do have to be careful. It may be safer to download local taxi apps like Maxim and Yandex. 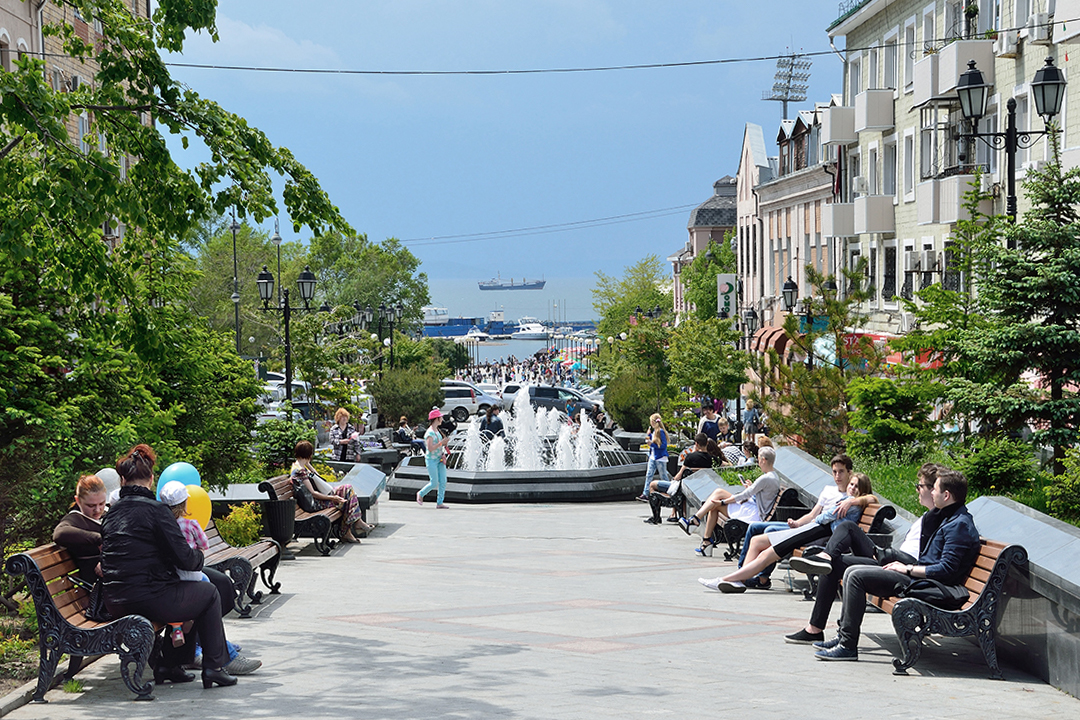 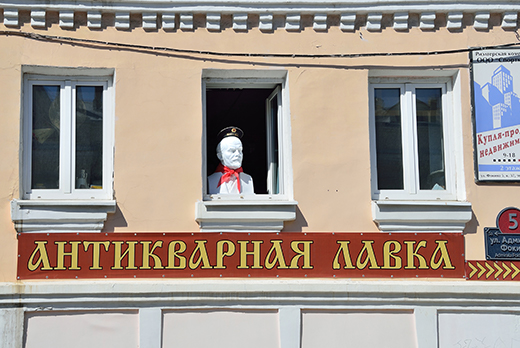 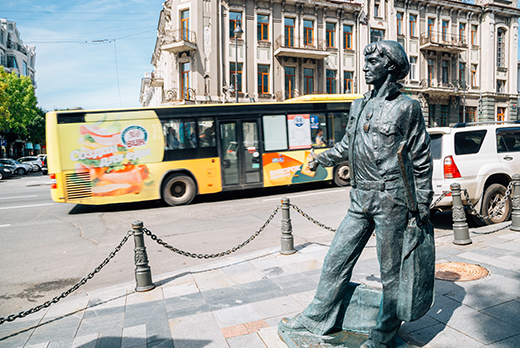 [13:00] Arbat Street
After you take a photo or two, it’s time to leave Eagle’s Nest Mount. It’s about a 30 to 40-minute walk to the southern part of town, but if the cold winds have got the better of you then a cab can take you all the way to the LOTTE HOTEL Vladivostok in less than 10 minutes. After you’ve dropped off your luggage, head south and you’ll see Clover House, home to the biggest supermarket in the city. This is the perfect place to pick up the famous Alyonka chocolate or mashed potatoes.
But if you’re not interested in shopping, head straight to Arbat Street. The word Arbat is Arabic, meaning suburb, and Arbat Street is especially famous in Moscow and Vladivostok. The official name of Arbat Street is Admirala Fokina. Although it’s only 1-kilometer long, there’re a lot to see as it has European-style buildings and is home to a lot of stores. You can take a break at the crab burger house, Russian pancake house or at a cafe. Using the map, we recommend you search for a dessert cafe called Ukh Ty Blin, located about halfway up the street. If you want to shop, then stop by Aleutskiy to purchase carrot cream or natural cosmetics from Siberia. They also have currency exchange stations where you can change money into rubles. 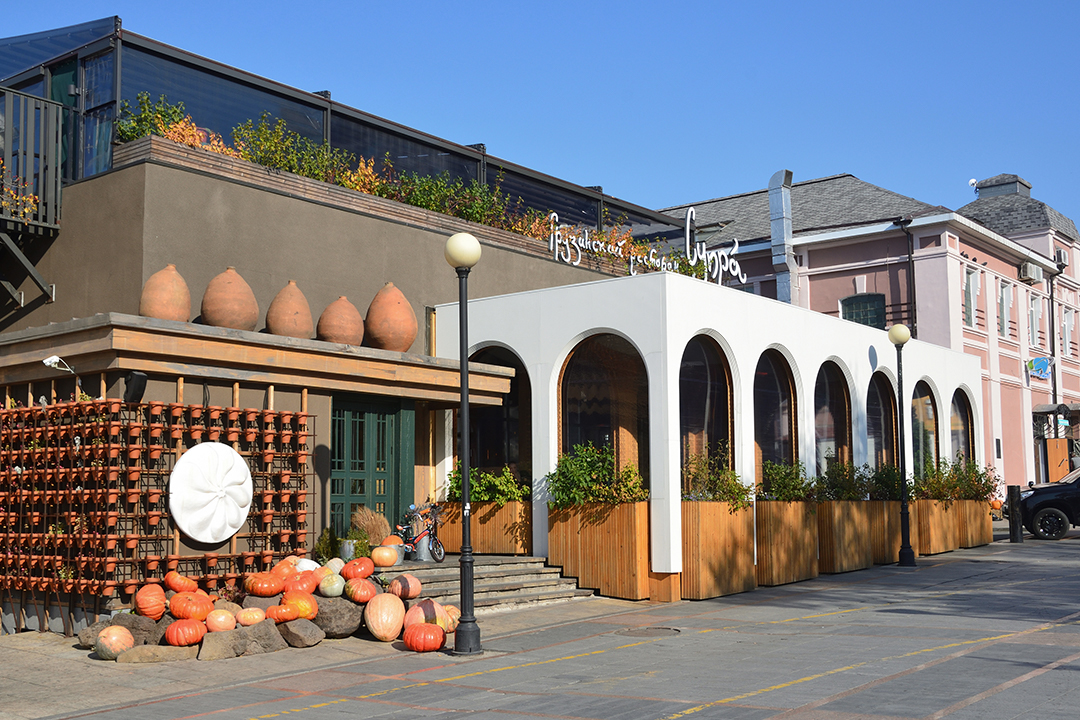 [16:30] Supra or Zuma
At the end of Arbat Street you’ll find the beach and Maritime Park. Right before you reach the sea, a restaurant filled with people will catch your eyes. It is a Georgian restaurant called Supra and if you walk one block north from Supra, you’ll see a seafood restaurant called Zuma.
Supra and Zuma are the two most popular restaurants in Vladivostok. Supra’s main dishes are meat and cheese. Shashlik is a dish of skewered and grilled cubes of meat, but at Supra, shashlik is served without the meat being skewered. Khachapuri, a traditional Georgian dish of cheese-filled bread, and khinkali, Georgian dumplings, are also popular options at Supra.
If you prefer seafood more than meat, then Zuma might be a better choice. You can try the king crab and snow crab at a surprisingly affordable price for a famous restaurant. Zuma not only has a Korean menu, but also serves kimchi as a side dish.
You have to make reservations at both restaurants. This can easily be done online so we recommend taking care of it before you leave home. Even with a reservation, the restaurants will be crowded during meal times so maybe consider an early dinner for a more comfortable dining experience. 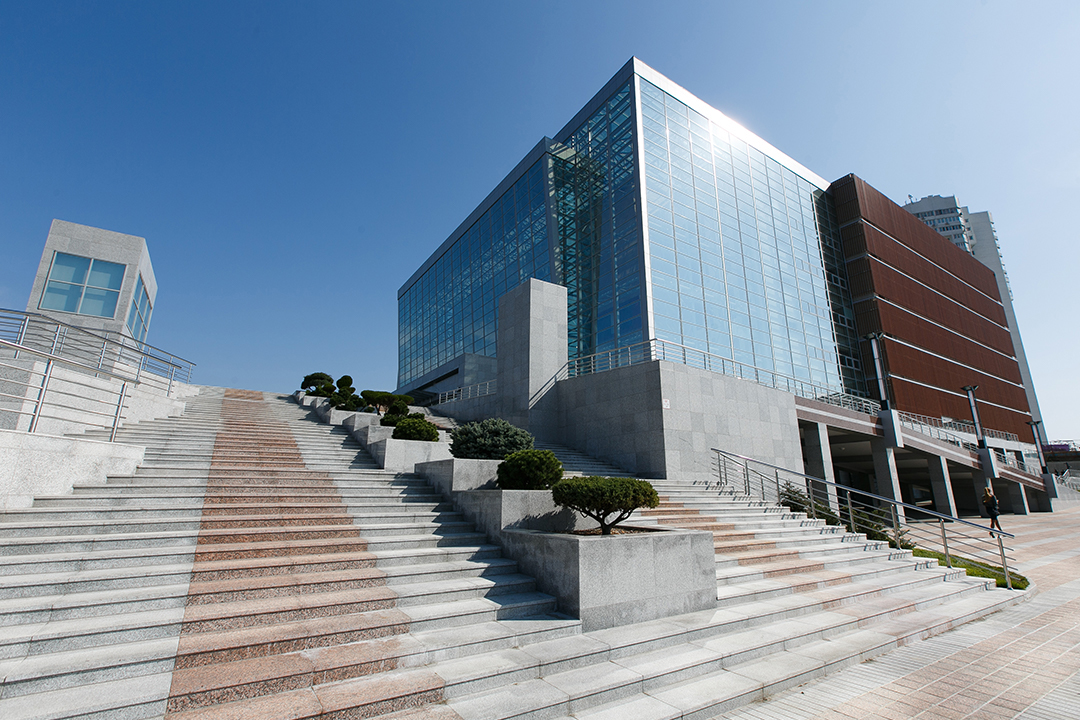 Mariinsky Theatre, where you can enjoy quality performances

[18:00] Mariinsky Theatre
If you had to pick the two best ballets in the world, the Bolshoi Ballet and Mariinsky Ballet would probably be strong contenders. The Mariinsky Ballet started when a dance school opened at the Imperial Theatre School at the Winter Palace in Saint Petersburg in 1738, more than 40 years before the Bolshoi Ballet started.
Two years later in 1740, the Mariinsky Ballet was established and went on to become the world’s leading ballet company. Built for the APEC Summit in 2012, the Mariinsky Theatre in Vladivostok has become one of the region’s top attractions. Ballet isn’t the only thing you can see here. Opera and orchestral performances are also often held. As you can watch these outstanding performances at a relatively cheap price compared to Korea, ranging from 1,500 to 3,000 ruble, it’s definitely worth a visit.
Performance information is available on the theatre’s website a month in advance and shows normally start at 7 p.m. with the theatre open an hour before the starting time. The theatre is walkable from downtown Vladivostok, crossing the Golden Horn and heading south, but if you want to take a cab back, it might be better to skip the curtain call to beat the traffic. Whether on foot or in a taxi, the night view as you cross the Golden Horn Bridge will definitely be memorable. 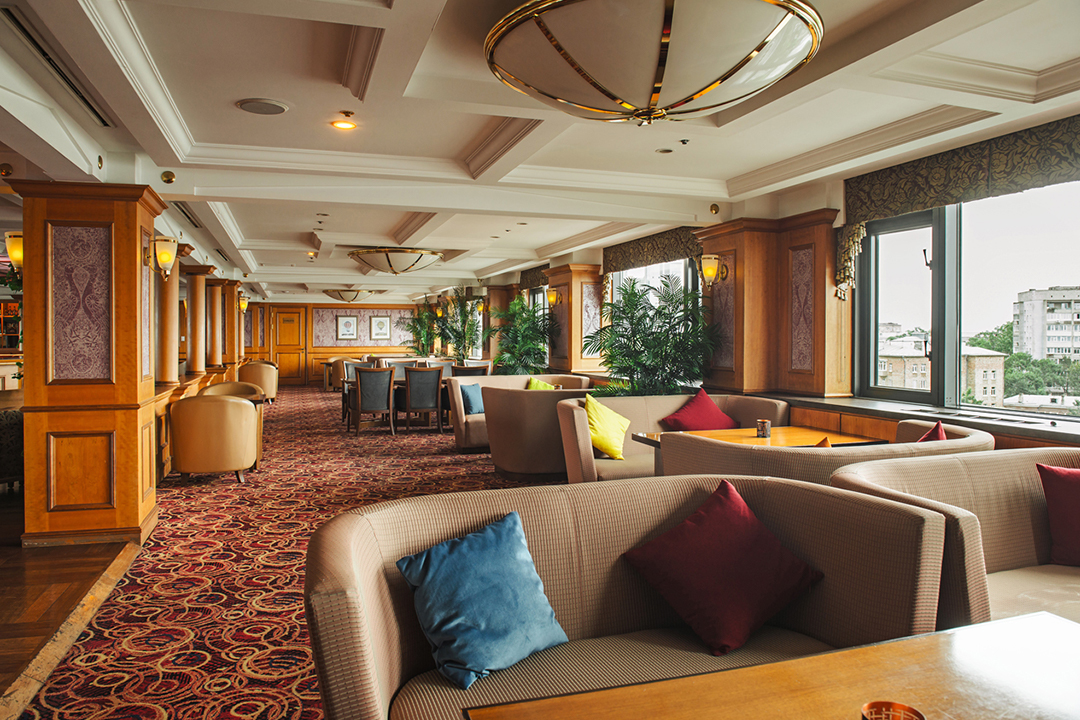 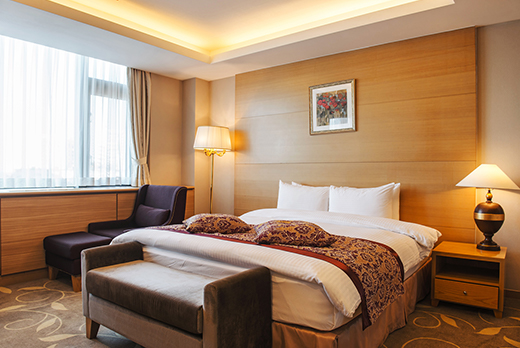 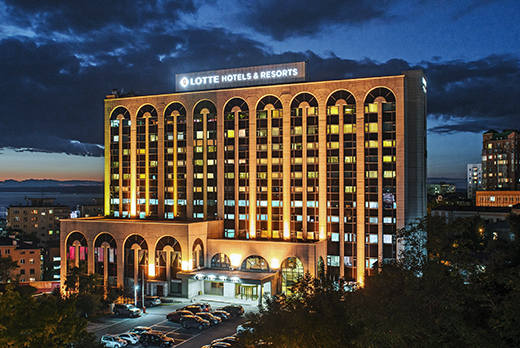 Place to stay in Vladivostok: LOTTE HOTEL VLADIVOSTOK
At the end of last year, Russia’s Maritime Government chose LOTTE HOTEL VLADIVOSTOK as the hotel of the year. Despite the short trip, you can find some comfortable familiarity in its Korean restaurant, indoor pool, sauna and fitness center. A view of Vladivostok from the Sky Lounge is not to be missed. More than anything, the location of the hotel is the best as all of Vladivostok is within walking distance. 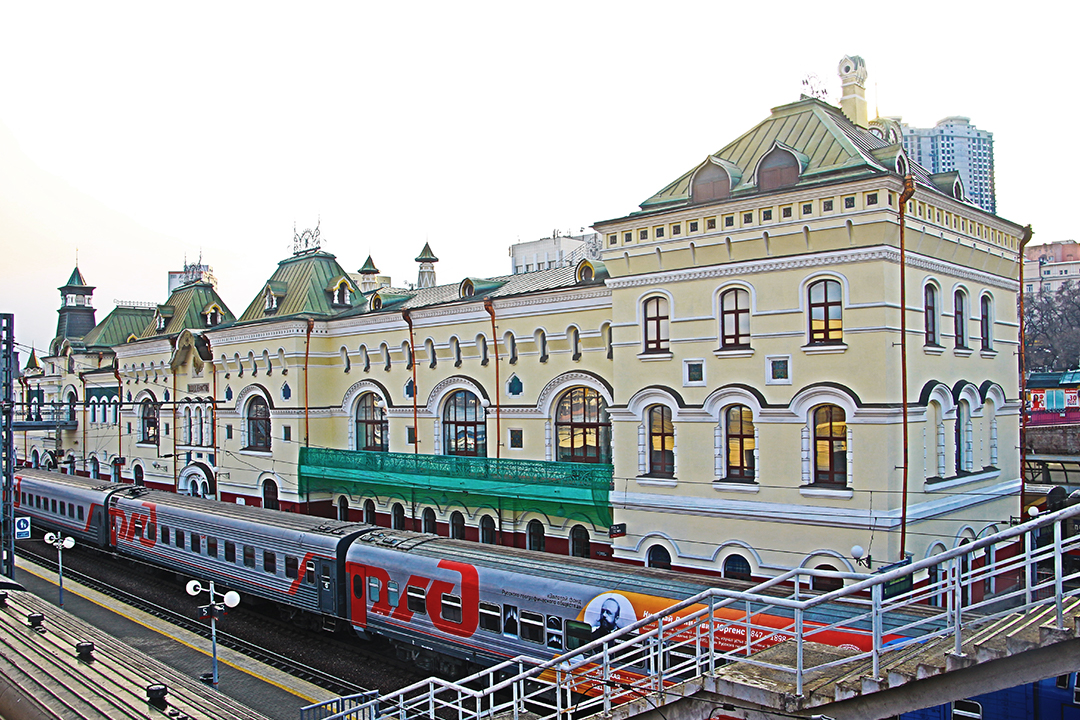 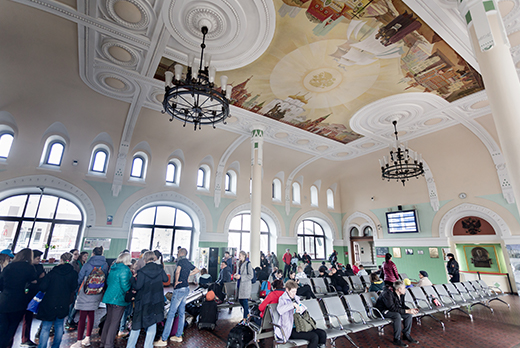 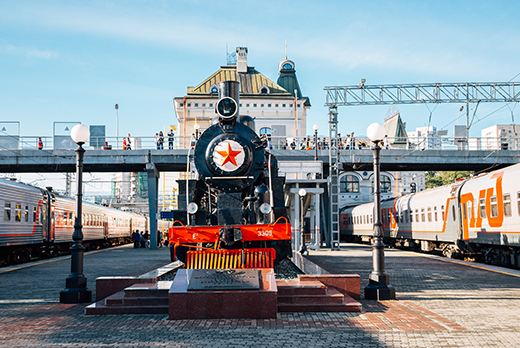 [08:00] Vladivostok Railway Station
Quite a number of people dream of taking the Trans-Siberian Express, which crosses 9,288 kilometers of Russia. Vladivostok is the start of the express train, which stops in Siberia before reaching its final destination in Moscow. Built in 1891 by Imperial Russia, Vladivostok Railway Station is a national historic site. Even if you’re not taking the train, you can still enter the platform. At the platform, the very first model of the Trans-Siberian Express, made in 1903, is displayed. This is a must-visit spot. Once you take a look around the station, then head to the Lenin Monument across the street.
Last April, North Korean leader Kim Jong-un arrived at Vladivostok by taking a train to meet with Russian President Vladimir Putin. The spot where the Lenin Monument is located is where reporters from around the world waited. 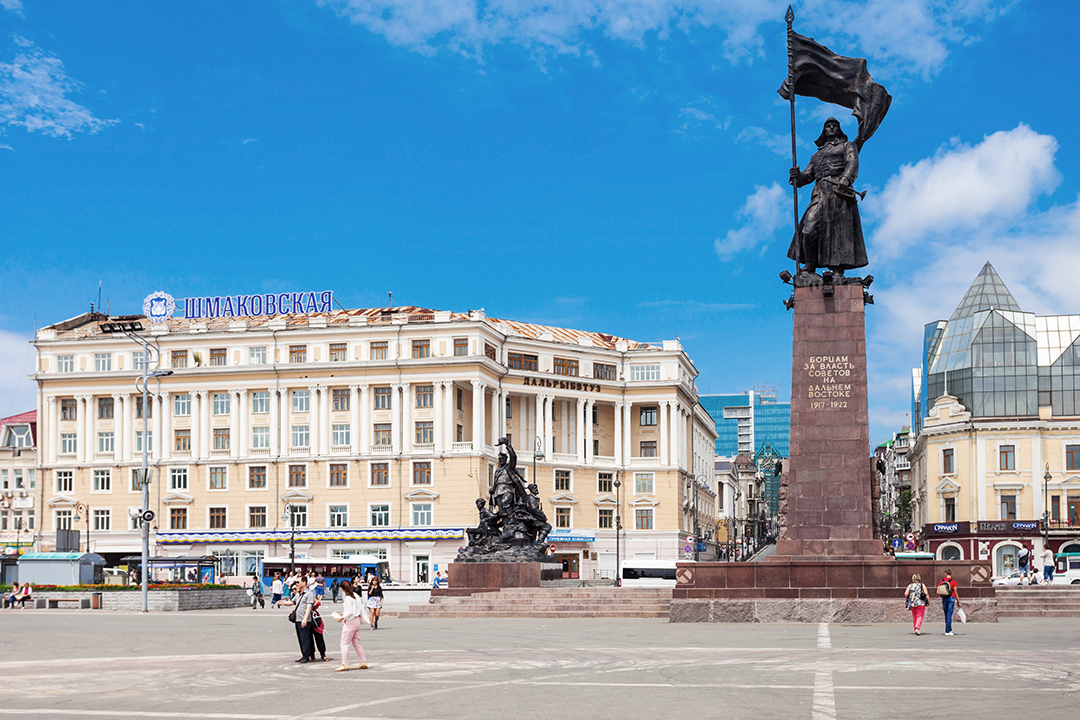 Central Square, with a bronze statue commemorating victims of the Russian Revolution

[09:00] Central Square
If you head east of Vladivostok Railway Station, along the sea, you’ll see the Central Square. In front of the Monument to the Fighters for Soviet Power, one of Vladivostok’s most recognizable sights, the square is wide and sprawling. On weekdays, the Central Square is often eerily empty. Cross the square and you can look at the Yul Brynner Monument. If you walk along the square, you can see the S-56 Submarine Museum and Triumphal Arch for Tsar Nicholas II.
On weekends, there’s a farmer's market. The liveliness of the market is definitely an exciting counterpart to the quietness of the square on other days. If you have time to stop by, we recommend organic Russian honey as a souvenir. 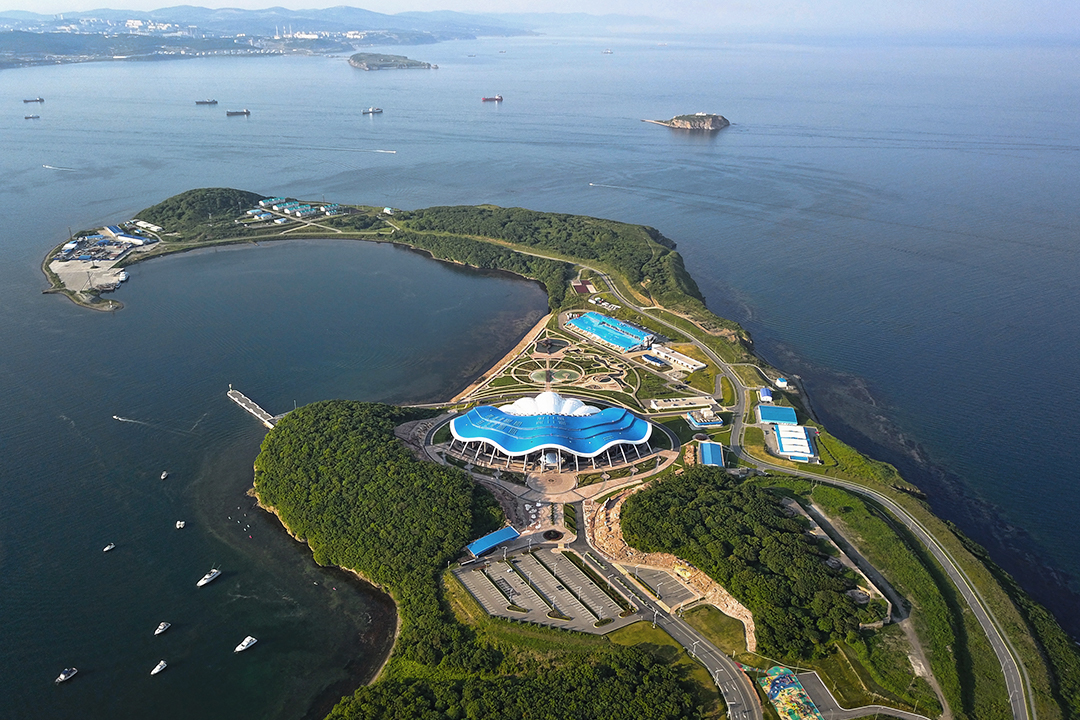 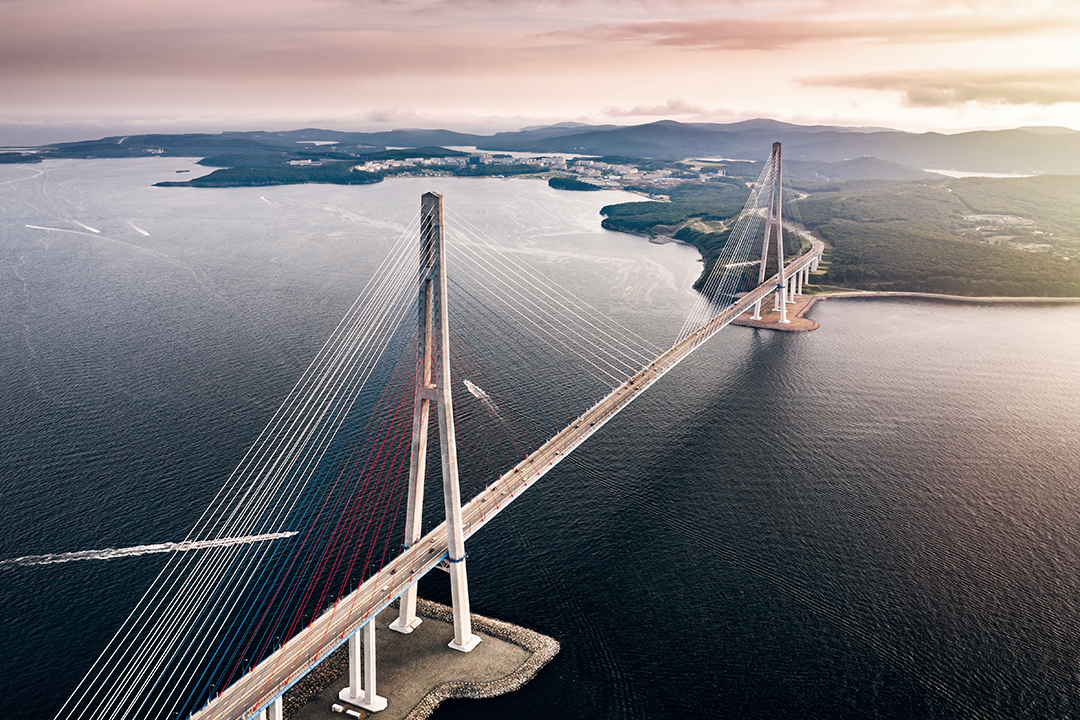 The beautiful Russky Island to the south of Vladivostok

[11:00] Russky Island
If you’re on a short daytrip, you should look around the Central Square, head to Arbat Street to fill your stomach and then head back to the airport. If your flight is at night and you have more time, take a look around Russky Island, located south of Vladivostok. Once you get a cab back to the airport from Russky Island, then it’ll be the right choice to finish your trip.
It’s quite different from touring around the city as the island is more nature friendly. When you visit on days with good weather, you can see North Korea in the distance, as well as the guards. Due to this, Russky Island is also called North Korea Island. Before you leave the island, it may be good to stop by the Far East Federal University. It was established in 1899 by Russia’s imperial family to develop the Far East region and is considered one of the top universities in Russia. It has the largest campus in Russia and is the most expensive university in the country.