Chengdu Culture Tour
In Chengdu, the ancient capital of Shu Han founded by Liu Bei of <Romance of the Three Kingdoms>, historic remnants and modern culture coexist.
At present, Chengdu is the capital city of Sichuan, Western China. Chengdu is where the provincial government is located. Liu Bei once called it Yizhou but since the Tang era, the current name of Chengdu has been used. Some fans of the Three Kingdom’s story call it Shukyo, meaning the capital of Shu. 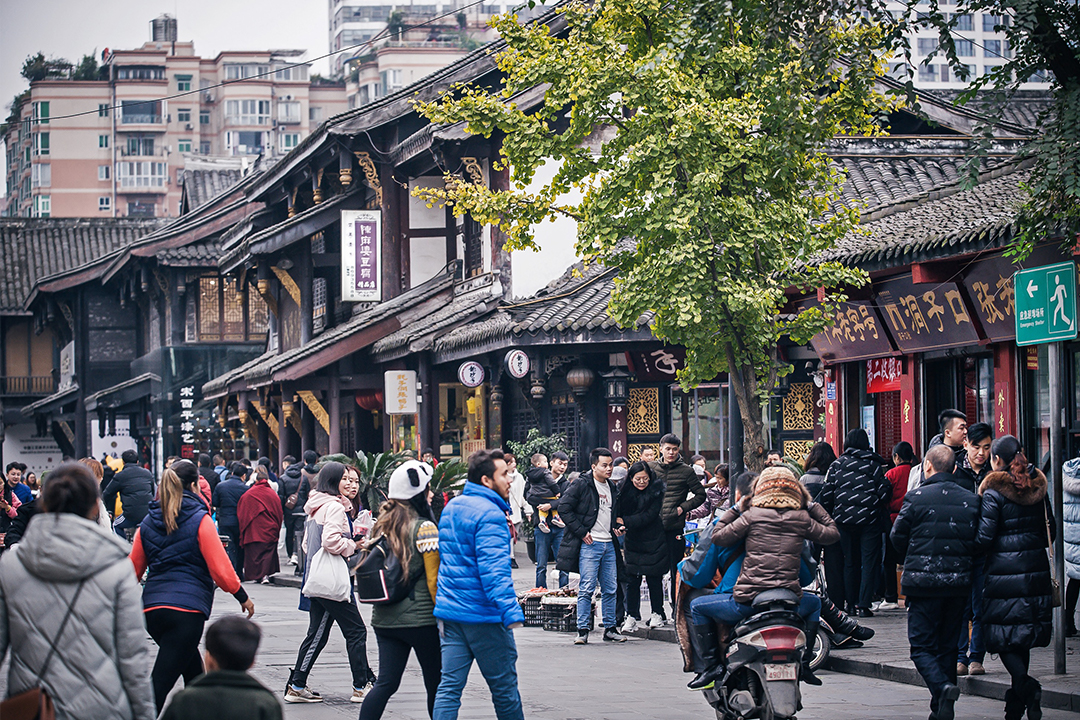 Chengdu is a big city in fact. With 14.5 million in population, it’s the fourth largest city in China. There are a lot of attractions to check out in the sprawling city, which adds to the charm of Chengdu. From the Three Kingdom’s Period to the Tang Dynasty, the Chinese city is full of historic marks and traces of ancient civilization. It also serves as an example of the socioeconomic development of a large city. There is an abundance of good eats. Chengdu is the center of Sichuan, from which Huo Guo and Mala Tang, the two trendiest Asian cuisines in all of China and Korea, have originated. Most importantly, it is the only panda habitat in the world. 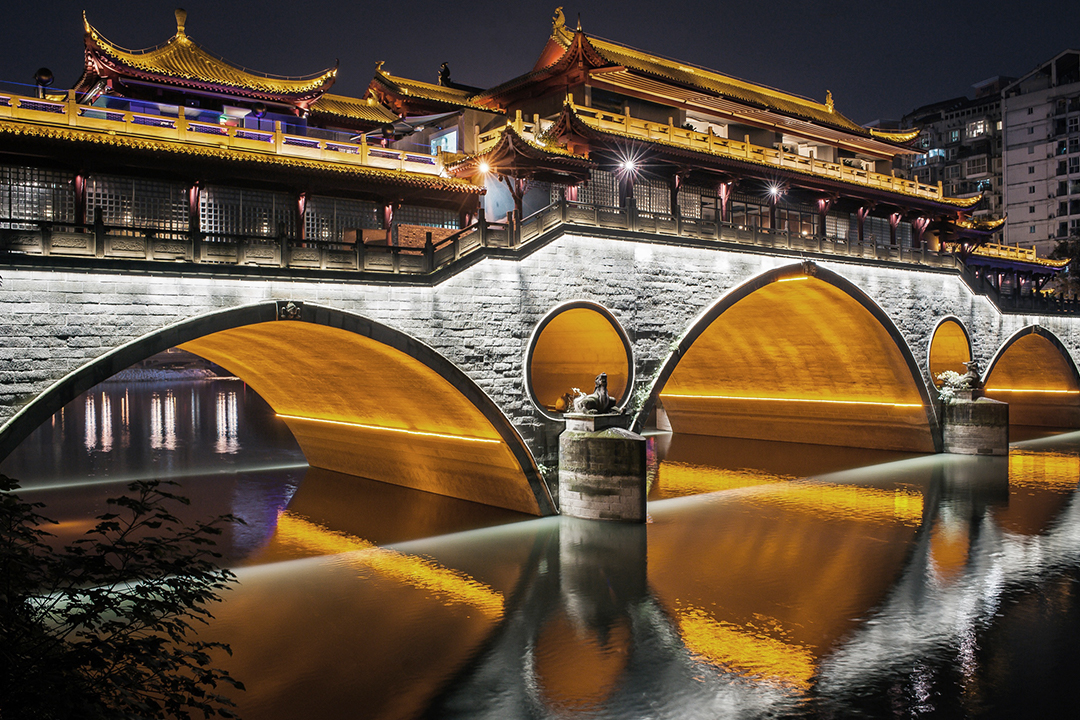 The Anshun Bridge is always crowded with tourists trying to get a glimpse of the night view. 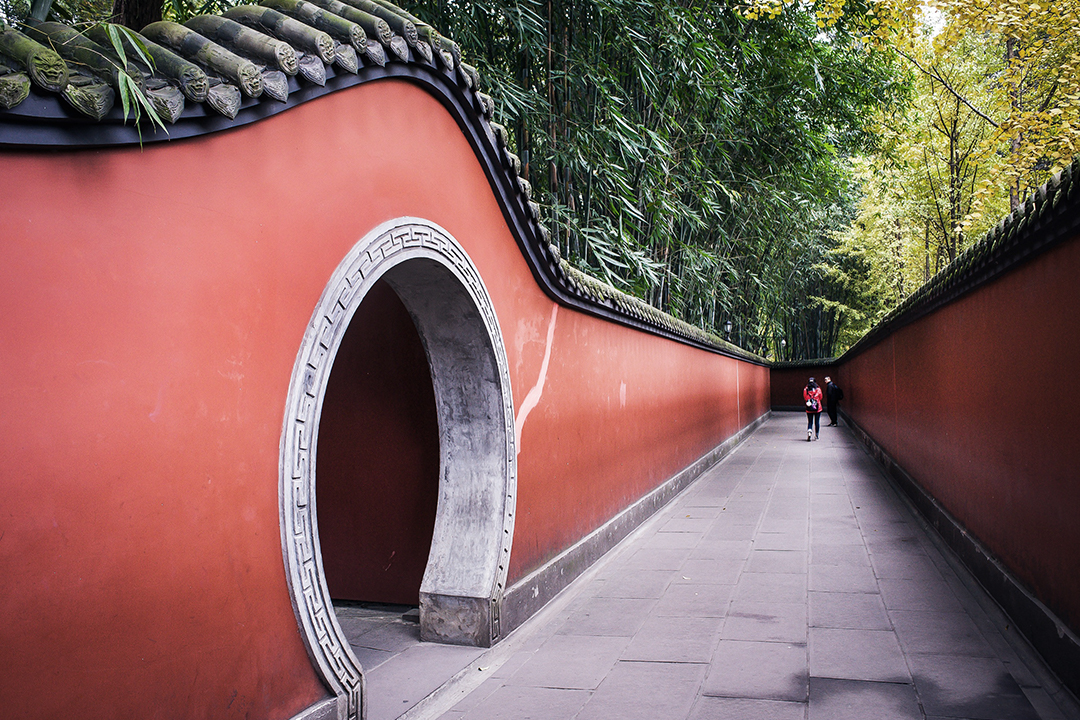 Meet Liu Bei and Du Fu
There is Wuhou Shrine in Chengdu. The name “Wuhou” comes from “Wu Xiang Hou,” an honorary title given to Zhuge Liang whom the shrine commemorates. Originally it was called Hanzhaolie Temple as a place where the tomb of Liu Bei “Hui Ling” was. The name was changed to Wuhou Temple after the shrine for Zhuge Liang was added to the site. Considering Zhuge Liang was a subject and Liu Bei was king, the fact that the shrine is named after Zhuge Liang shows how tremendous his presence and contributions were for the Kingdom of Shu and Chinese history. The landscaping and architecture of Wuhou Temple of today were built during the Qing Dynasty. 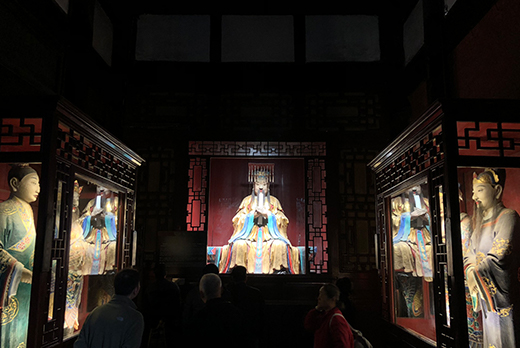 Portraits of figures in Shu Han during the Three Kingdoms period 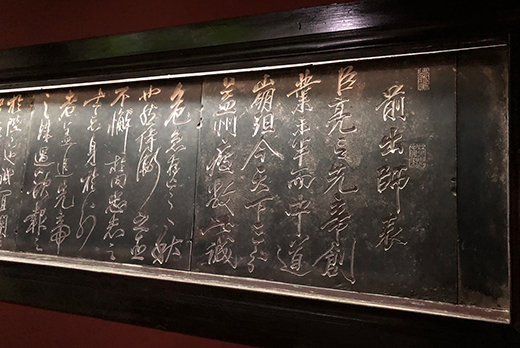 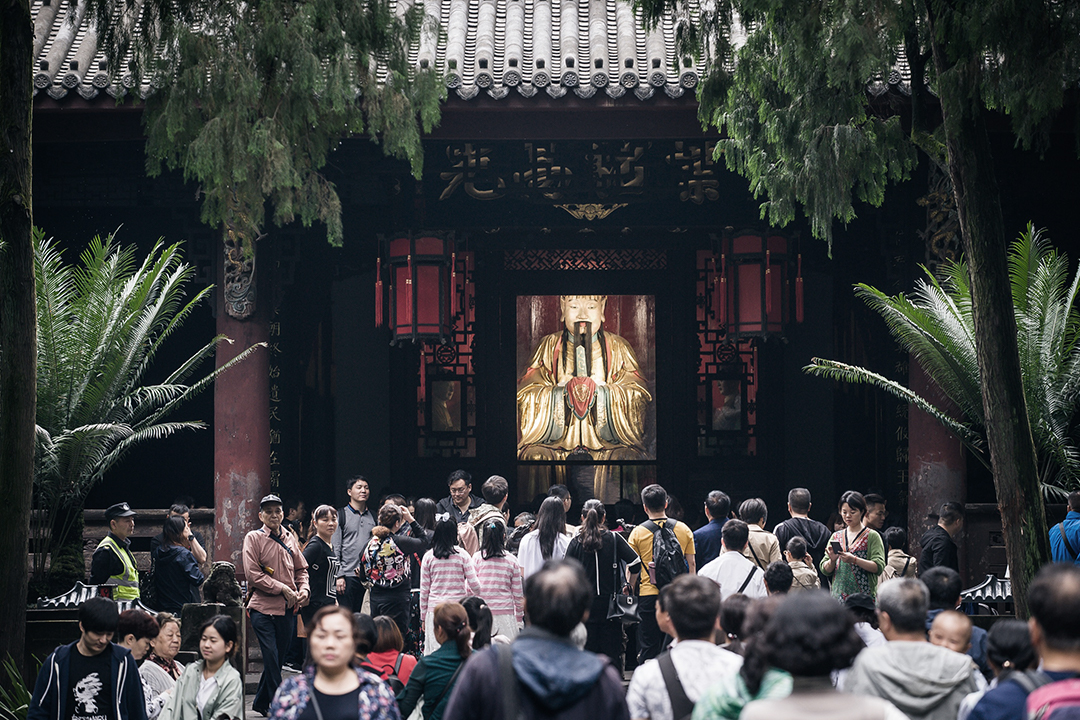 In the shrine, the statues of generals, such as Guan Yu, Zhang Fei, and Zhao Yun, and those of administrators including Pang Tong stand facing each other with Liu Bei in the center. It is likely that the closer the figure is to the king’s statue, the bigger his role or significance was.
The most famous artifact in Wuhou Shrine is “Chu Shi Biao,” the memorial work of Zhuge Liang. It is what Zhuge Liang submitted to Liu Shan, the second emperor of the Shu, before embarking on an expedition. The one in Wuhou Shrine was transcribed by general and calligrapher Yue Fei during the Southern Song Dynasty. 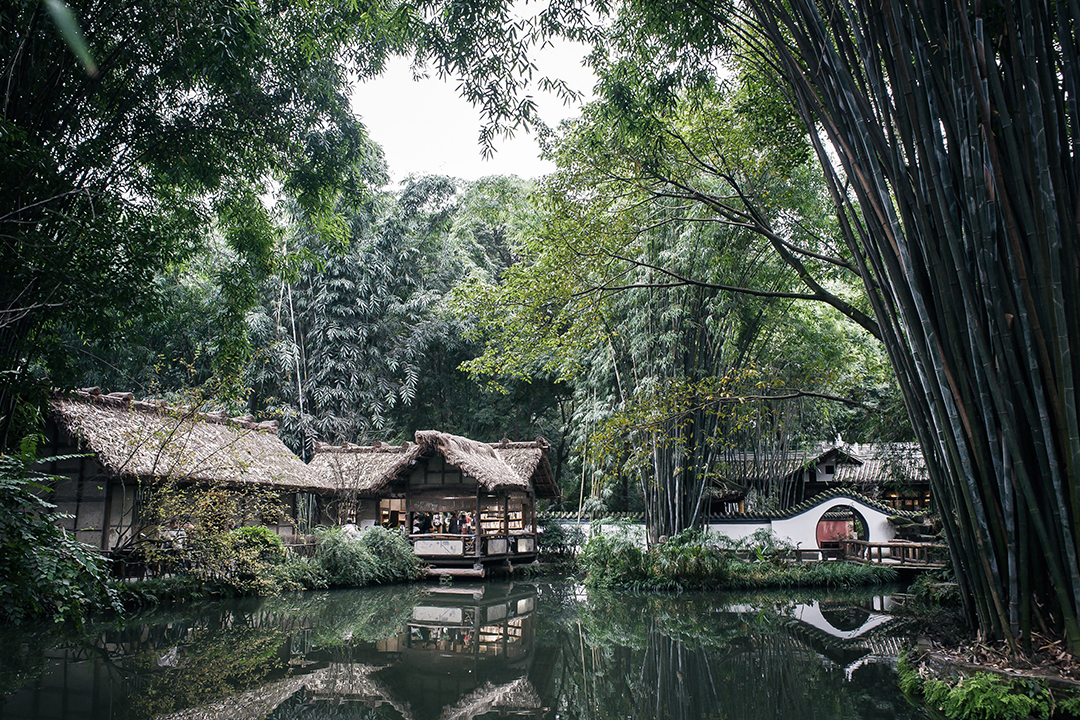 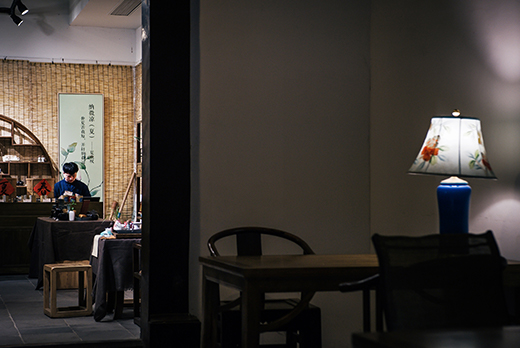 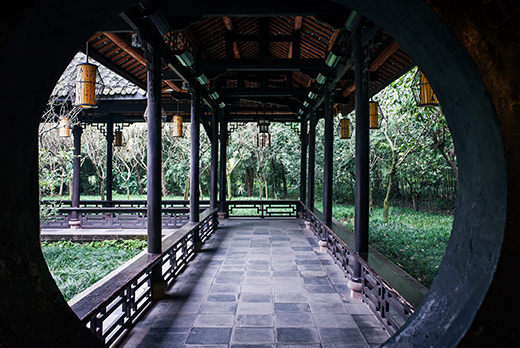 About 3.5km from Wuhou Shrine is Du Fu Thatched House. During the Tang Dynasty, poet Du Fu took refuge in Chengdu from the An-Shi Rebellion and built his small cottage, which is the most famous memorial hall for the poet among others across China. While staying at the cottage, Du Fu composed about 240 poems. The period is considered the heyday of the great poet. The lot where the thatched house sits also has a bamboo grove, lake, and pagoda, where visitors can enjoy strolling in a quiet, relaxing atmosphere.
The thatched cottage is comprised of the main building, Hall of Historic Poetry, and Gongbu Temple. Interestingly, each memorial hall has records of rivalry between great poets from different time periods. Their poems dealt with the same theme but some of them were written over 10 years apart. 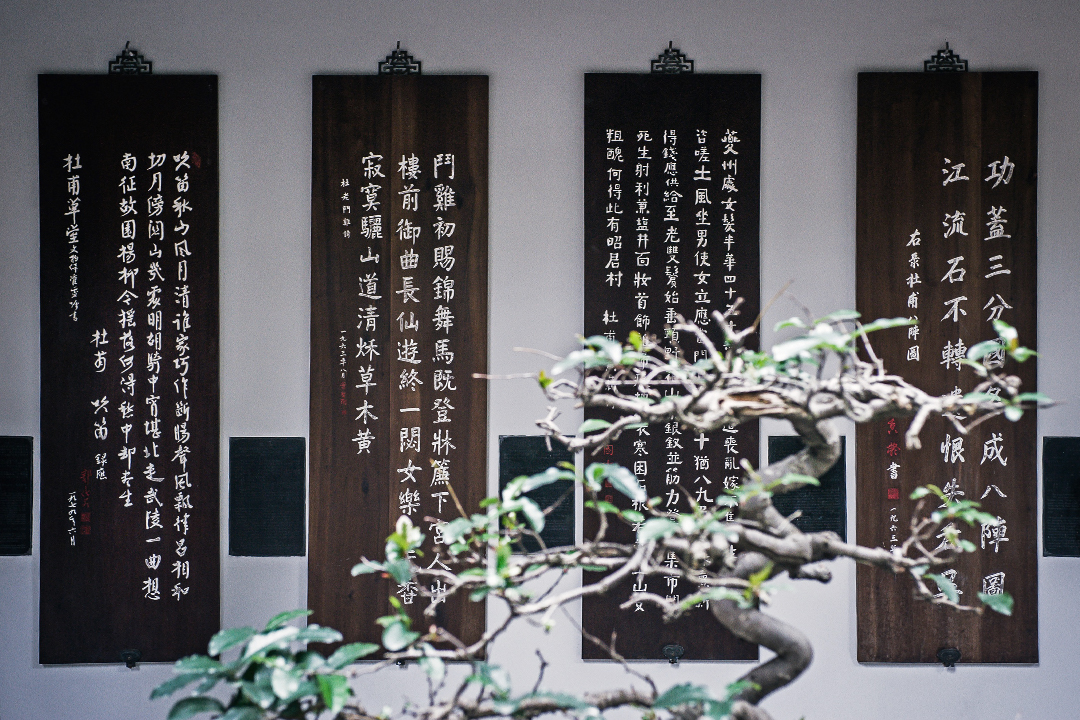 Another noteworthy artifact is the horizontal boards with couplets or steles of Du Fu’s poems inscribed by celebrities of following generations, including Mao Zedung. It shows the deep appreciation Chinese people have for Du Fu.
Mapo Tofu and Chuan Chuan
Walking in the streets of Chengdu, you will smell a pungent scent anywhere you go. The scent is from a spice called “Hua Jiao,” Sichuan peppercorns. They bring “Ma” or numbingness and create hot flavors, known as “La,” when mixed with spicy peppers. That’s how “Mala” came about. In Chengdu, you are never free from the scent of Mala.
Mapo Tofu uses the Mala base. Chengdu is where Mapo Tofu originated. Chen Mapo Tofu restaurant that developed the recipe is in Chengdu. The original cuisine in which tofu and beef are mixed with rapeseed oil, peppers, and Hua Jiao does not have the sweet element that Koreans are used to, but is still rich in flavor and spiciness. 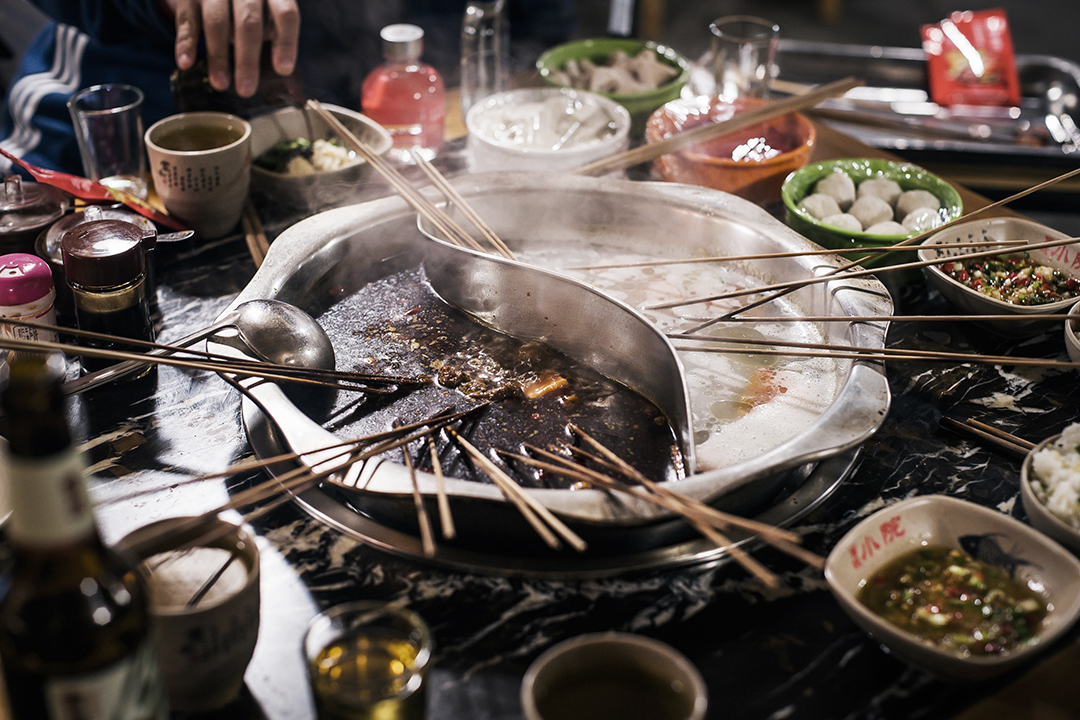 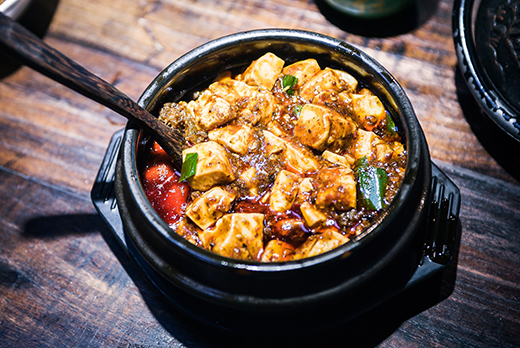 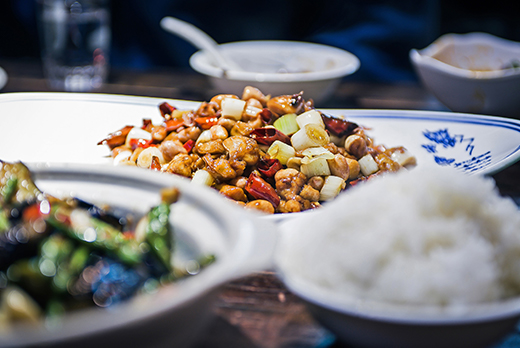 Kung Pao Chicken, a dish of stir-fried chicken and peanuts

Huo Guo, thinly-sliced beef and seafood cooked in the soup with vegetables, also is from Sichuan. To be precise, Huo Guo using the Sichuan-style spicy broth is. The origin is Chongqing of Sichuan Province. Chengdu differs slightly as people use bamboo sticks to dip the ingredients in the broth. That is Chengdu-style Huo Guo known as Chuan Chuan. In downtown, Chengdu streets are lined with restaurants specializing in Huo Guo and Chuan Chuan. The Chuan Chuan restaurants have dozens of bamboo sticks on each table. One restaurant owner selling Chuan Chuan says Huo Guo and Chuan Chuan both carry strong flavors, but Chuan Chuan is more spicy and aromatic than numbing. Of course the difference cannot be felt by a rookie Mala fan. 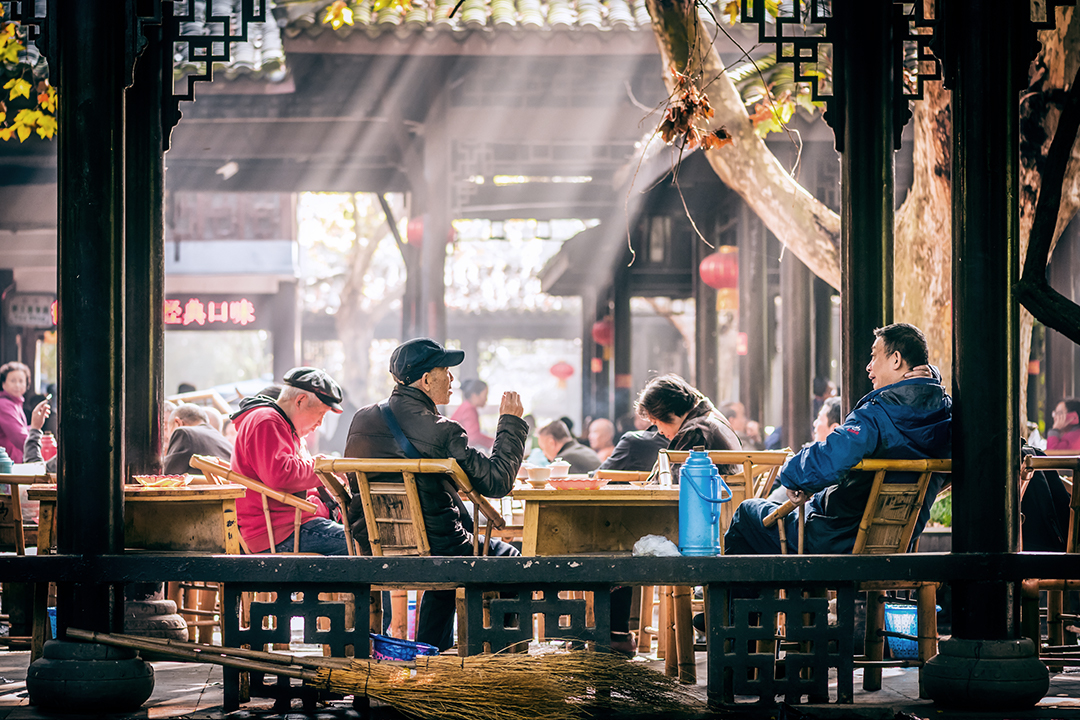 Heming Tea House is one of the most famous tea houses in Chengdu, always filled with tea enthusiasts.

Taste of Sichuan Tea
China is the nation that loves tea the most in the world. They drink tea no matter the place. They consider brewing and drinking tea a type of art. There are many tea houses in China. Sichuan Province, along with Yunnan Province, leads tea production in China. Tea trees in these regions are tall and their leaves are fermented before drinking because of bitterness. Yunnan’s puer tea is a popular fermented tea. People of Chengdu, thanks to the long history of tea drinking in that region, love to consume tea. They enjoy puer tea, green tea, and jasmine tea in daily life. Because of frequent drinking, they use a gaiwan, a Chinese lidded bowl without handle, as a teacup, which is unique to Chengdu. 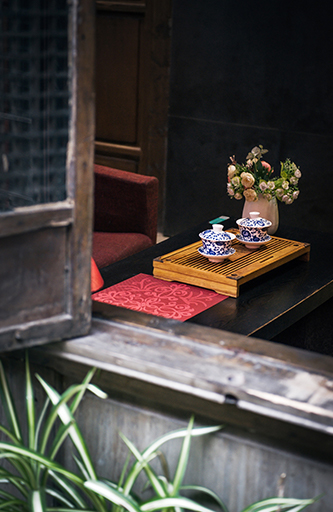 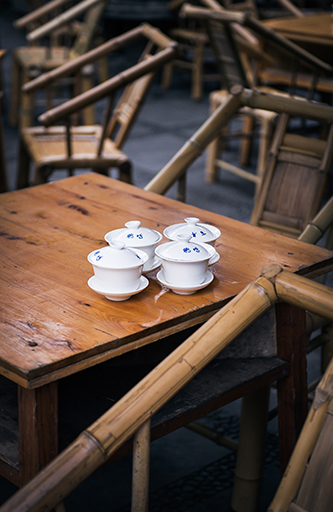 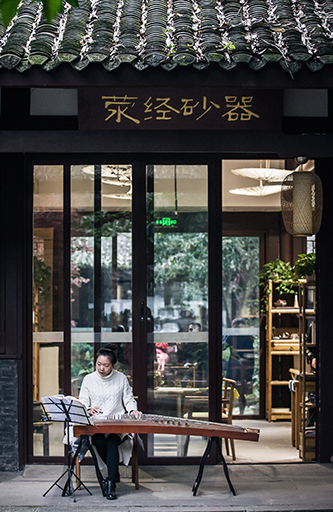 Views of tea houses in Chengdu

In Chengdu, there are two famous tea houses. One is Guanyinge Tea House built in 1912 that is also known as a 100-year-old tea house, and the other is Heming Tea House in People’s Park. Guanyinge Tea House is a little far from downtown Chengdu for travelers to visit easily, but Heming Tea House is in the city’s center. Heming means singing crane and the tea house opened in 1923. It is located by a lake and filled with tea enthusiasts regardless of weather conditions. 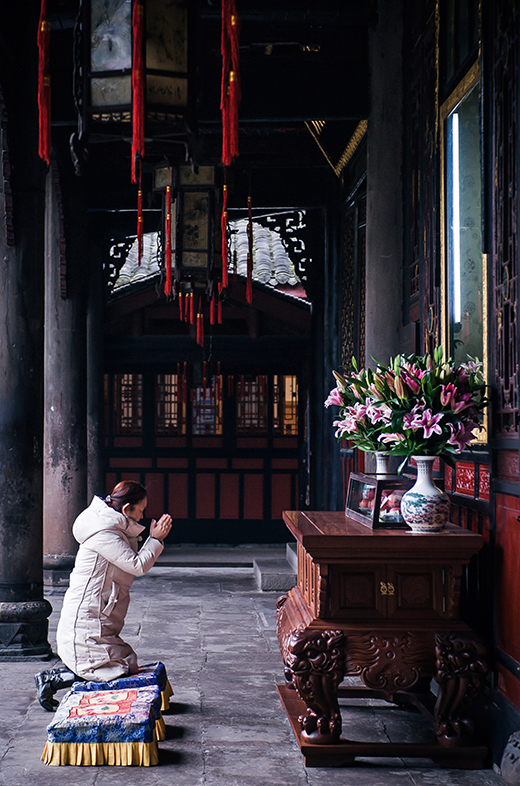 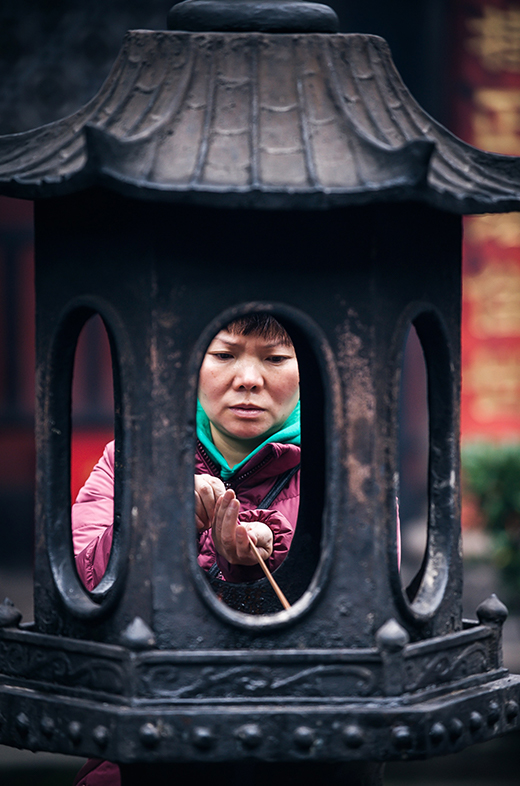 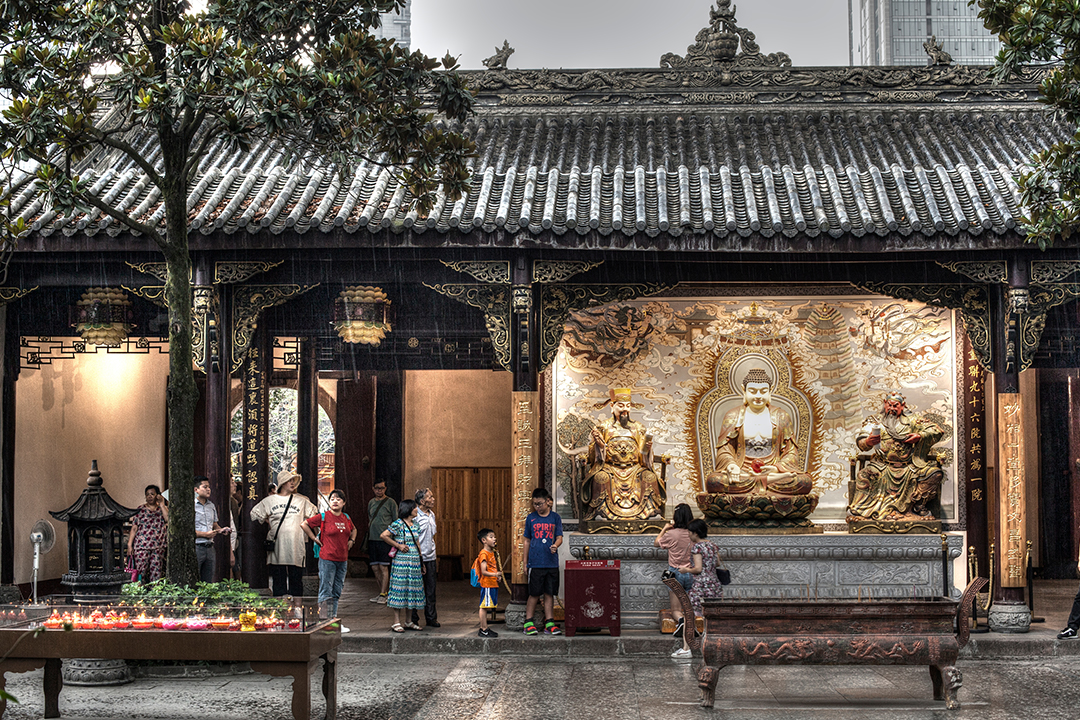 Daci Temple, where Monk Xuanzang was ordained. Visitors stop by to make their wishes.

Big City Chengdu
Chengdu is a city of long history but also the trendiest and most culture-loving city in China. Several years ago, a Chinese pop song titled “Chengdu” made a big hit, and younger generations started traveling to the namesake city. Chunxi Road, the busiest section of the city, is lined with highrises and luxury goods stores. It reminds people of Hong Kong’s shopping district. Taikoo Li Street where high fashion brands’ flagship stores are housed in traditional Chinese buildings and Daci Temple where Monk Xuanzang of was ordained are also on Chunxi Road. 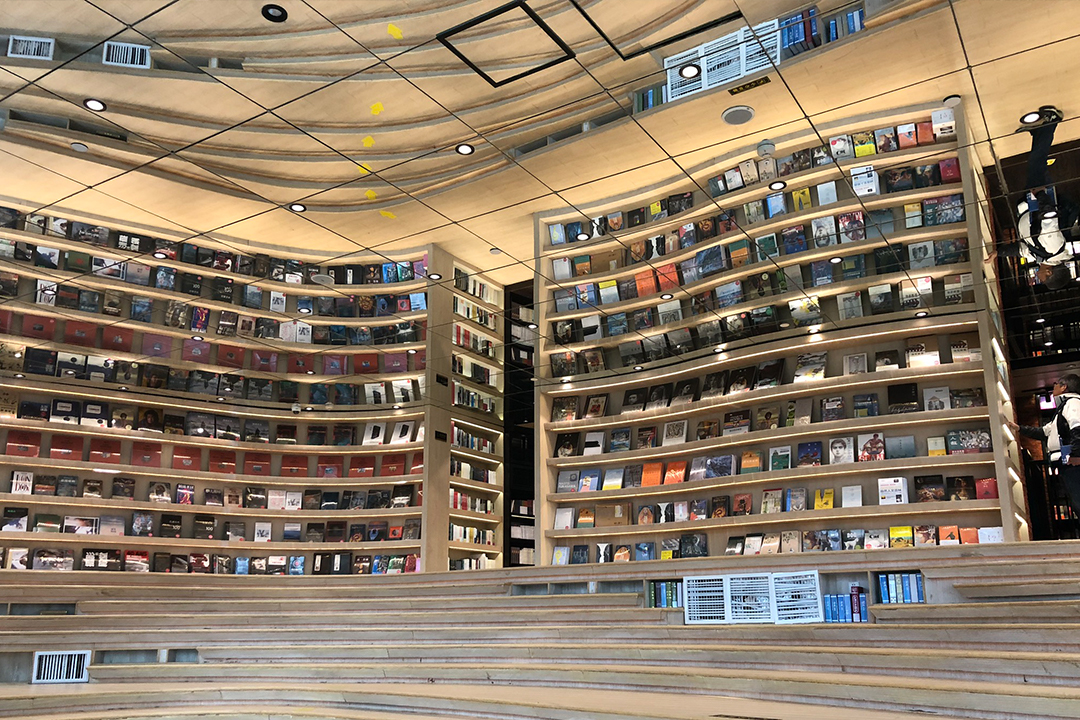 Chengdu has the second-most bookstores after Beijing in China. It is said there are over 3,400 bookstores in the city, with unique concepts and characteristics. Even if you can’t read Chinese, it would be fun to look around them.
Known as the most beautiful bookstore in the world, Zhongshuge Bookstore has a branch in Chengdu. Although it is a little far from downtown, it serves as a space accommodating various cultural activities. Yan Ji You and Fangsuo bookstores share the city center as well, attracting young customers who want to not only read books but enjoy diverse culture. 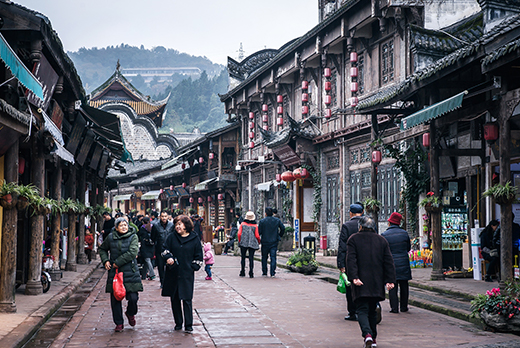 Luodai Ancient Town, which has reproduced an old China 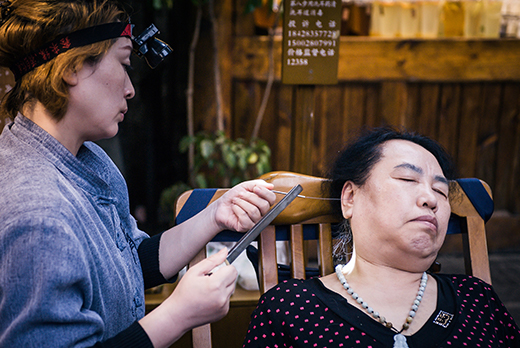 A visitor getting the ear cleaned 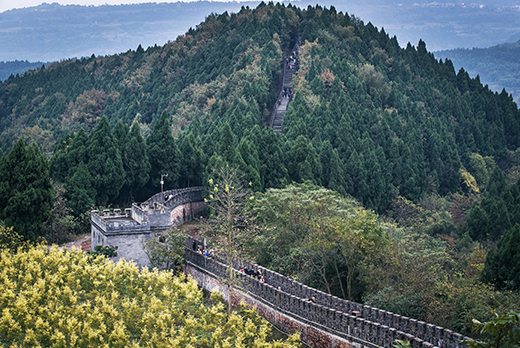 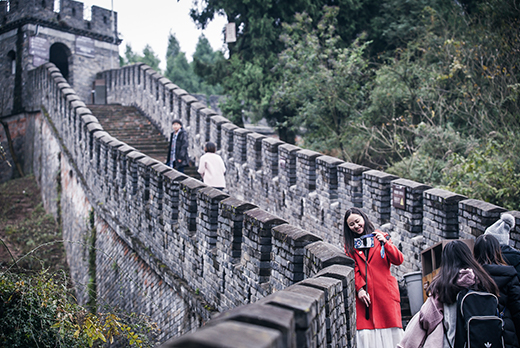 View of King Long Great Wall. It looks like another Great Wall of China.