Miracle on the Han River
The Han River you see while running alongside it is quite different from the Han River seen through windows of your car or subway train. When you’re running, you become part of the landscape, too. The Han River then becomes so incredibly beautiful as to be miraculous.
We all have different ways to make ourselves to feel better. Personally, I go for a run. It doesn’t cost me anything. And when I am finished, it doesn’t just make me feel great that moment; that sensation stays with me the whole day. And running gives me a great excuse to eat anything I want. I can eat this and that because I just ran! Whether you cover a short distance or go for a long haul, running requires persistence and perseverance. It always gives you a great sense of reward. Running is always great, but doing so by the Han River is especially so. When the sun is about to set, or when lights come on at bridges, the river is absolutely beautiful from every angle. I love football, baseball and yoga, but running is my favorite activity for a simple reason: the scenery. I get to run by the river with a cool breeze in my face. I get to run under huge bridges with headlights of cars lighting my path. I also get to pass dogs, people, grass and trees. If you’ve never gone for a run, I can say this with confidence: “There’s so much happiness out there to be had.” And you simply have to run along the Han River.
Han River Running Routes, as Recommended by Lee Wooseong, poet, runner and Minam Company CEO 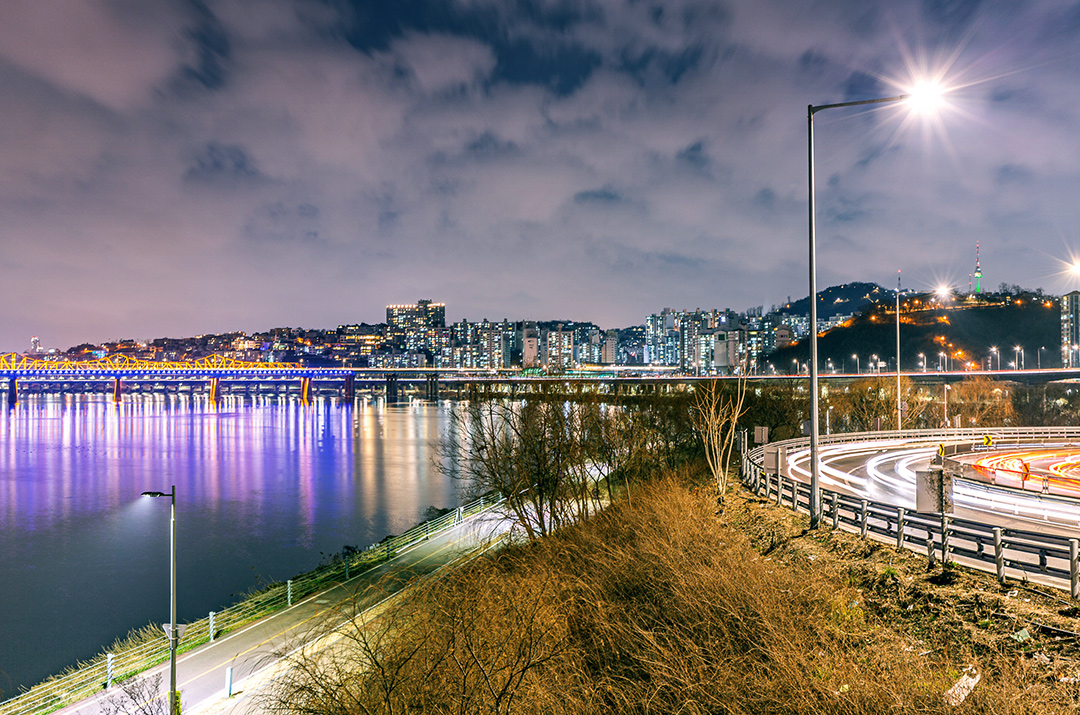 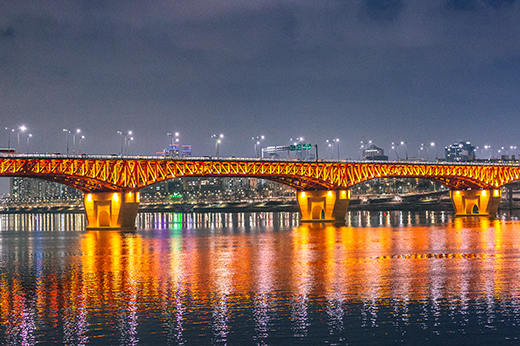 Seongsu Bridge is seen in the distance. © Kim Eun-gyu 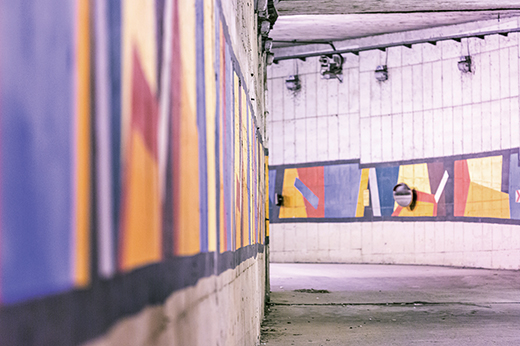 Seoul Forest, Hill of Wind
Run Along Hill of Wind at Seoul Forest and Reach Han River Near Seongsu Bridge
There are several paths that lead you from Seoul Forest to the Han River. You can look them up on your phone, or if you just keep running, you’ll see the river. If you follow your gut feelings and see a passage that you think will take you to the river, then that’s the way to go. If you get lost, well, you’ll always have your smartphone. I like to do a lap of Seoul Forest before hopping over to the Han River. My favorite course covers Hill of Wind. When I first went there, I thought to myself, ‘This place is awesome. Why haven’t I ever come here before?’ It’s deep inside Seoul Forest, and you have to make an effort to get there. The hill leads you to a pedestrian bridge connecting it with the Han River. Seongsu Bridge and Dongho Bridge will come into view from afar, with LOTTE WORLD TOWER and N Seoul Tower even farther back on either side. Underneath the passage, Gangbyeon Expressway and the entry to Dongbu Expressway appear all jumbled. It will feel as though you’re standing on top of Seoul, and the experience will instill you with newfound energy and courage. The gust of wind there will mess up with your hair, too. I often feed off that energy to run above the two expressways to reach the river. From there, I go 2 kilometers and back, and every time I do that, I marvel at how beautiful and how delicate Seongsu Bridge is. When I was in fourth grade, the bridge collapsed. Perhaps it turned out this way after it was rebuilt. The more I look at this bridge, the more architecturally beautiful it seems, but then again, maybe it’s just me. You can come back the way you went, through Hill of Wind. Or, if you follow along the river, you will find a tiny tunnel that connects to the forest. Take some photos there as you catch your breath. Do another lap at Seoul Forest and you’ll have run about 6 km. Of course, if you like running in the trees, Seoul Forest won’t go anywhere. 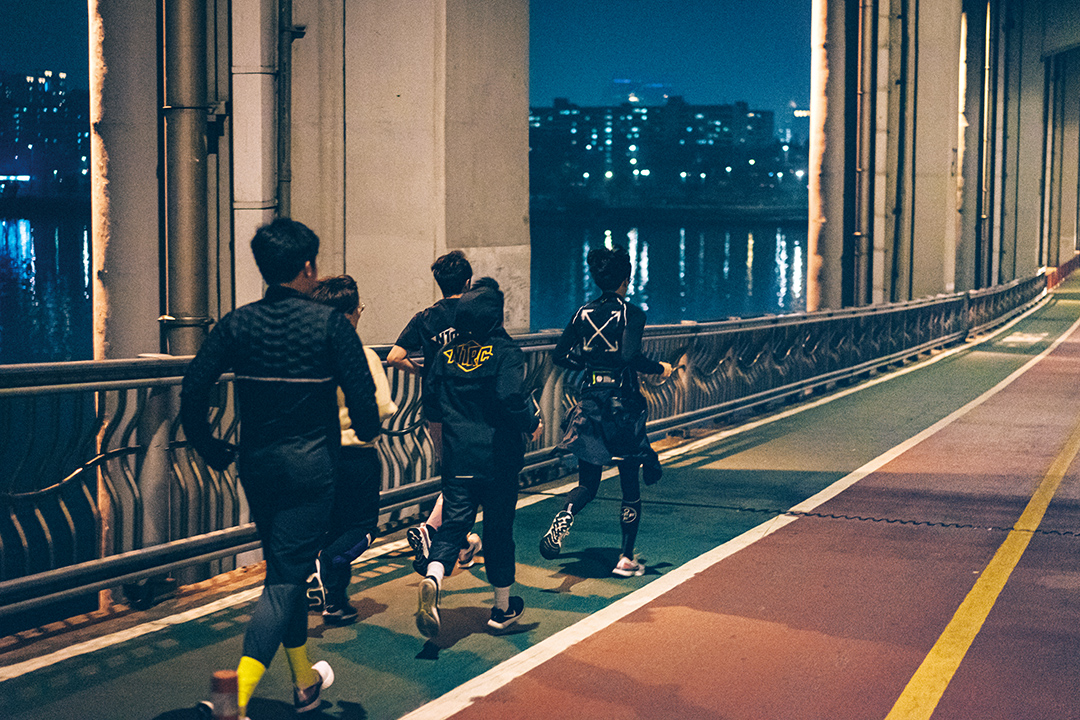 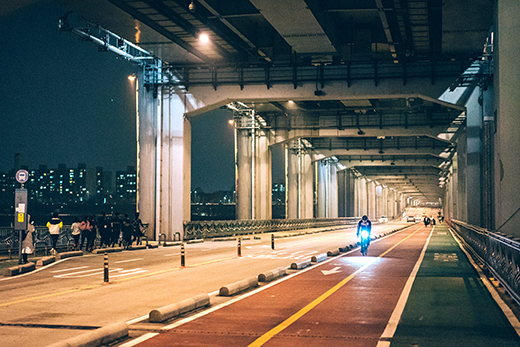 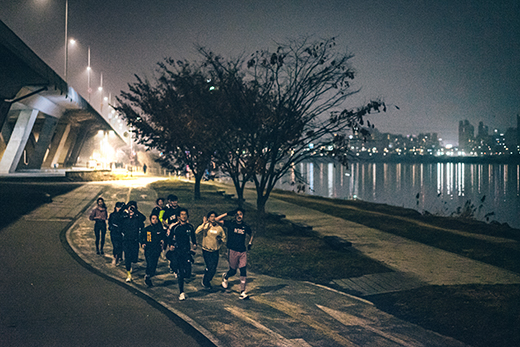 Jamsu Bridge
From Jamwon Han River Park or Ichon Han River Park to Banpo Bridge
Jamsu Bridge runs underneath Banpo Bridge. Traffic runs in the middle, with pedestrian passages on each side. They are wide enough for both walkers and runners. Above your head, cars travel across Banpo Bridge. So it gives you the sensation of being a running vehicle. The distance is about 800 meters. The bridge is shaped like an arch, and you’ll run up the hill for one half and go down the hill for the other half of the bridge. That should give you a good practice for running uphill and downhill. I usually use Jamsu Bridge as the halfway point, after coming in from Banpo, Yongsan and Ichon areas. I do a ‘city run’ through Itaewon, and head over to the Han River from Bogwang-dong Community Center, and then run toward Banpo Bridge. The river flows to my left. This river at night is gorgeous viewed from anywhere, but from this area in particular, the river seems to run more quietly and peacefully. Running through this area is almost meditative. Jamsu Bridge itself is great, but the route leading to that bridge is also fun. Don’t go too fast there. You should run to the slow pace of the river. As you get close to Banpo Bridge, you may utter to yourself under the breath, ‘I am almost there.’ Once you reach Jamsu Bridge, take some selfies with Banpo Bridge in the background, and soak in as much of the river as you can before you hit the road again. The uphill could be a bit of a challenge. If you’re so inclined, you may push yourself hard and run out of breath there. But then, why would you want to do that there? Running across the Han River will give you the type of excitement that’s difficult to describe. So take your time. At the other end of Jamsu Bridge, you’ll reach Moonlight Square and Banpo Han River Park. They’re always crowded in spring. You’ll see some drinking beer sitting on a mat, and couples kissing next to the Moonlight Rainbow Fountain. And of course, there are other runners. On beautiful days, no one is every lonely there. Hope springs eternal by the river. 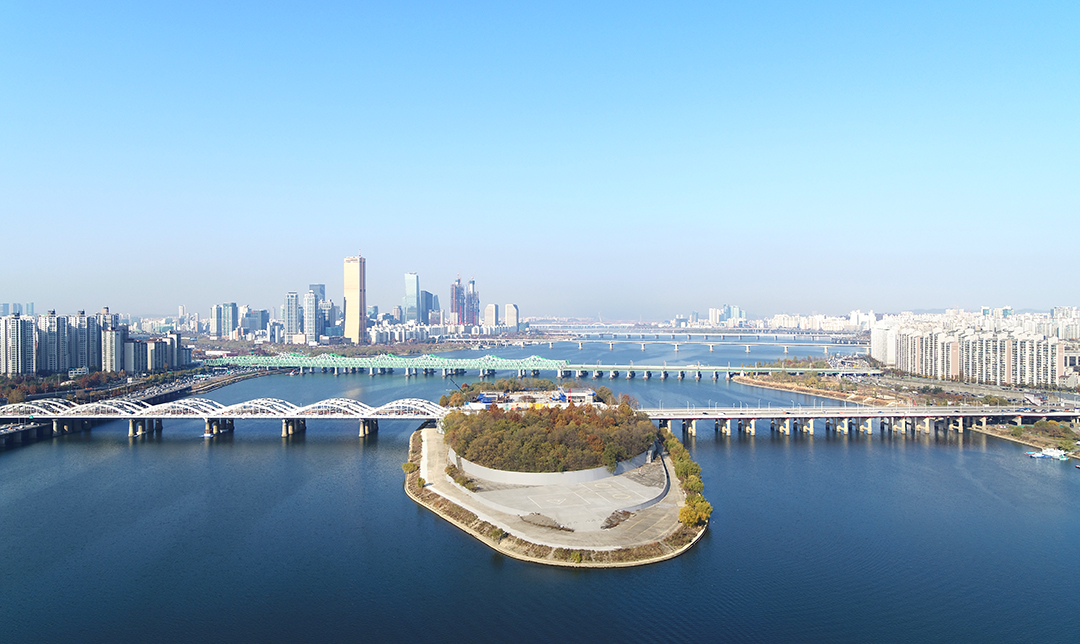 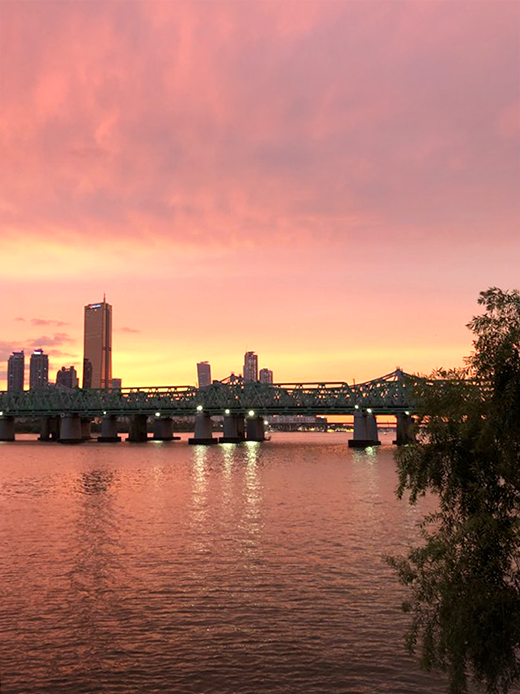 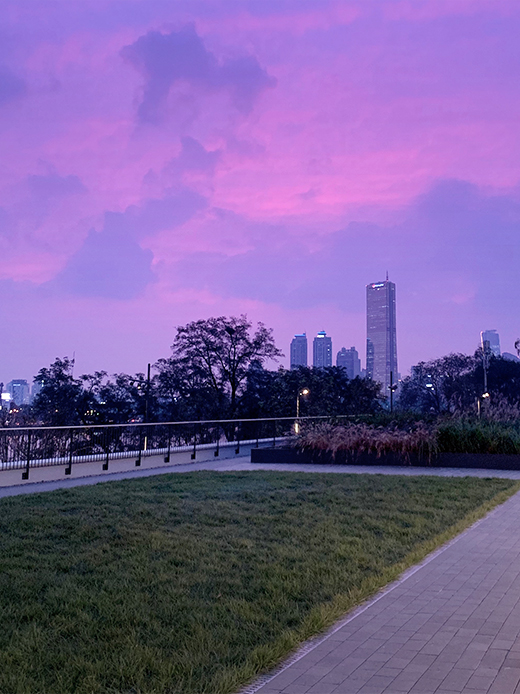 Hangang Bridge, Nodeul Island
From Yeouido Han River Park or Banpo Han River Park toward Hangang Bridge to reach Nodeul Island
The new Nodeul Island opened last September. It’s got a café and a book store, plus a vast, open lawn and a line of food trucks – except during winter. I went there in winter, so it felt rather empty. But the place was still quite beautiful. The entrance to the island takes the form of a large, stair-like square. It’s a great place to sit down to rest after a run. Lights come on at nights from all angles. Needless to say, they make for a pretty sight. On the new-look island, runners will find enough space to take a breather and to stretch, not to mention bathrooms and cafes for your caffeine fix. Start from riverside parks at Yeouido, Banpo or Ichon and run toward Hangang Bridge. Once you get there, take the stairs up the bridge. Nodeul Island is somewhere in the middle of the bridge. Viewed from the bridge, it may seem as if the river and the sky merge into each other. I started my run at Ichon park near sunset, and by the time I walked up to Hangang Bridge, the sun was at about my sightline. The sun was on its way into the river. It was the perfect moment just to get lost in my own thoughts. When you admire that view and finally arrive at Nodeul Island, the feeling you get is truly unique. Perhaps the only comparable is the sense of anticipation you get while clutching the box holding some stuff you ordered online, as you try to decide how to best open the thing. From the very top of the café, you’ll get a panoramic view of Seoul. At the left and the right ends of Hangang Bridge, two cafes stand facing each other – the Altair and Vega Cafés. The Han River viewed from inside those cafes is as beautiful as the names of the cafes are romantic. You may start wishing your girlfriend or boyfriend were a runner, too, if she/he wasn’t already one. It depends on where you start, but Nodeul Island is better as a halfway point than as a final stop. There’s no parking, and the only public transit available is the bus. You only have your own legs to trust.