Walking Gyeongseong in Jeongdong
There was a time when Seoul was called Gyeongseong. On a sunny day, you can rediscover the old Gyeongseong while walking on Jeongdong-gil behind Deoksugung Palace.
The capital of a nation can often change. Sometimes it is for the transfer of the city to a different region, and other times it’s just to give a new name to the city. The current Seoul also had gone through a long period during which its name was replaced multiple times. Once it was called Gyeongseong. In August 1910, Japan changed the name of Seoul from Hanseong to Gyeongseong-bu as it forcefully occupied the Joseon dynasty. That name lasted for 36 years until 1946 when it finally became Seoul. If you want to find the old Gyeongseong, a couple of hours of walking on Jeongdong-gil will be enough. In Jeongdong, there still exist structures built in the early 1900s using Western architectural style. 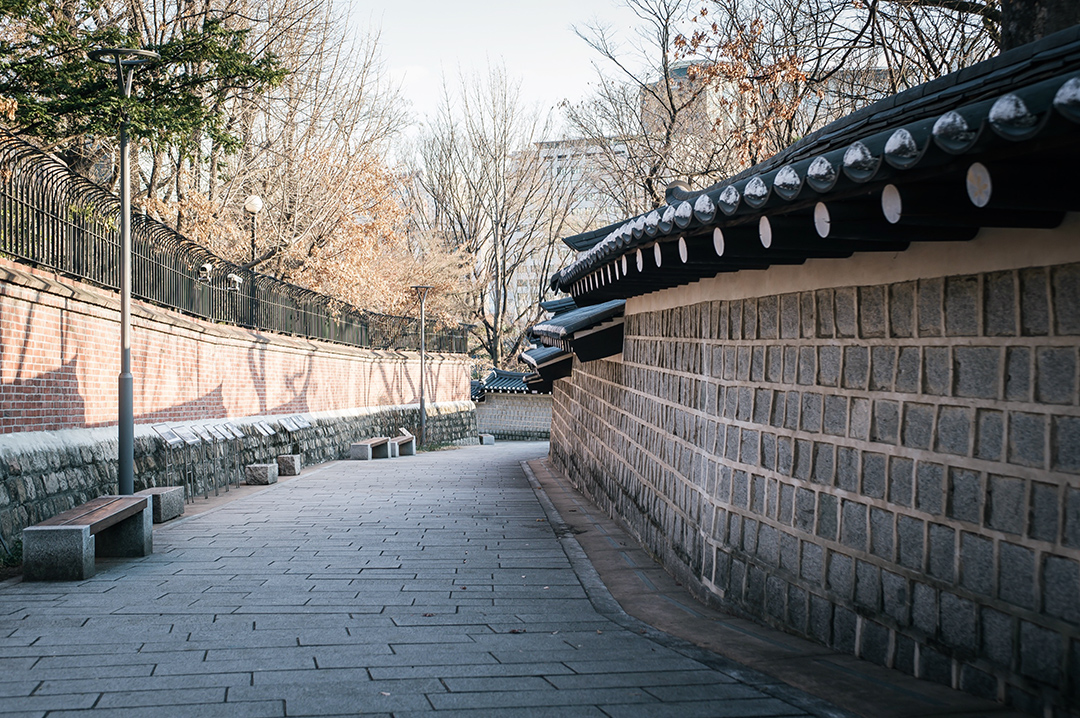 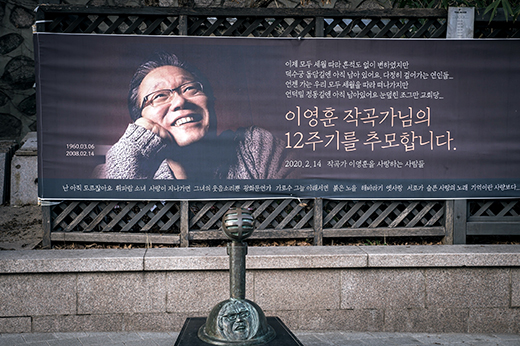 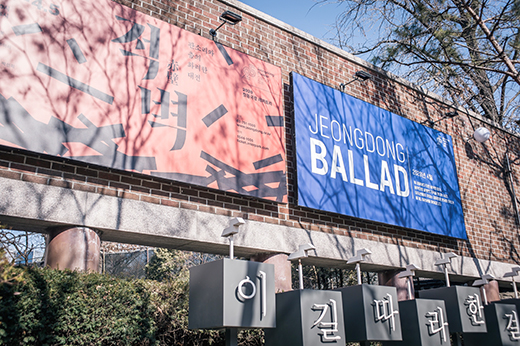 Dreams Dreamt in Jeongdong
Jeongdong in Jung-gu, Seoul, is currently an administrative division that spans from Deoksugung Palace to the Salvation Army Museum of History and includes Ewha Girls’ High School, Jeongdong Theater, and Seoul Anglican Cathedral. It was originally where the tomb of Queen Sindeok from the early Joseon era was located. Queen Sindeok is the heroine of the famous historical episode in which King Taejo(Yi Seong-gye) met a woman drawing water near a well while he was on a hunt and was given by her a bowl of water with a floating willow leaf intended to stop him from drinking too quickly.
Although it wasn’t allowed to build a tomb within the capital city, King Taejo went ahead and buried her near his residence. The burial site was called Jeongneung. Later it was relocated to north of the city, and the new site took the name Jeongneung, which still refers to the area in Seongbuk-gu. Meanwhile, the new name of the original site only kept the letter ‘jeong’ from its previous name, becoming Jeongdong. In the early 1900s, it was documented as the official name of the town when the administrative division of Sojeongdong became Jeongdong. 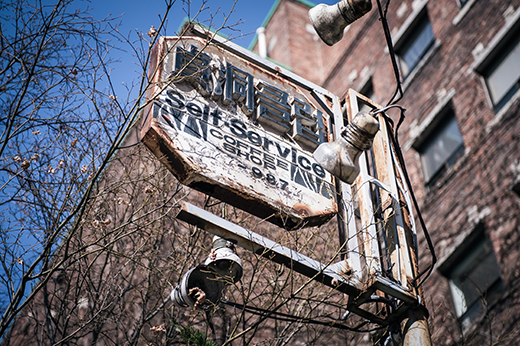 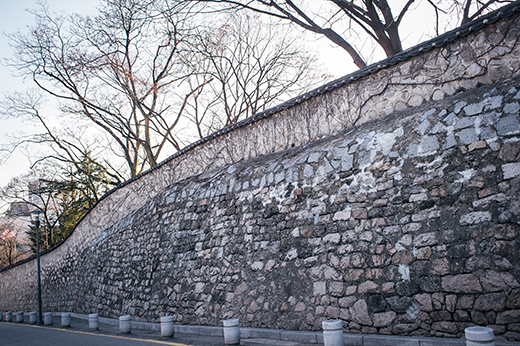 Alleyway in Jeongdong showing the passage of time

The area of Jeongdong where Gyeongungung(now Deoksugung) and commoner villages were situated became a historic symbol and gateway through which foreign civilization entered, as Western powers fought for preoccupancy of the country during the early enlightenment period in the late 19th century. King Gojong moved his residency from Gyeongbokgung to Gyeongungung and declared himself the first Emperor of the Empire of Korea. During this time, the nation saw an influx of Western legations. In 1883, the U.S. legation was established in Jeongdong for the first time in Joseon, followed by Germany, Russia, the U.K., and Belgium.
With the legations, missionaries came into the country and started building educational facilities and hospitals. Among those schools and religious establishments were Ewha Hakdang(1886), Baejae Hakdang(1885), Jangrim Cathedral(1892), and Chungdong First Methodist Church(1897). 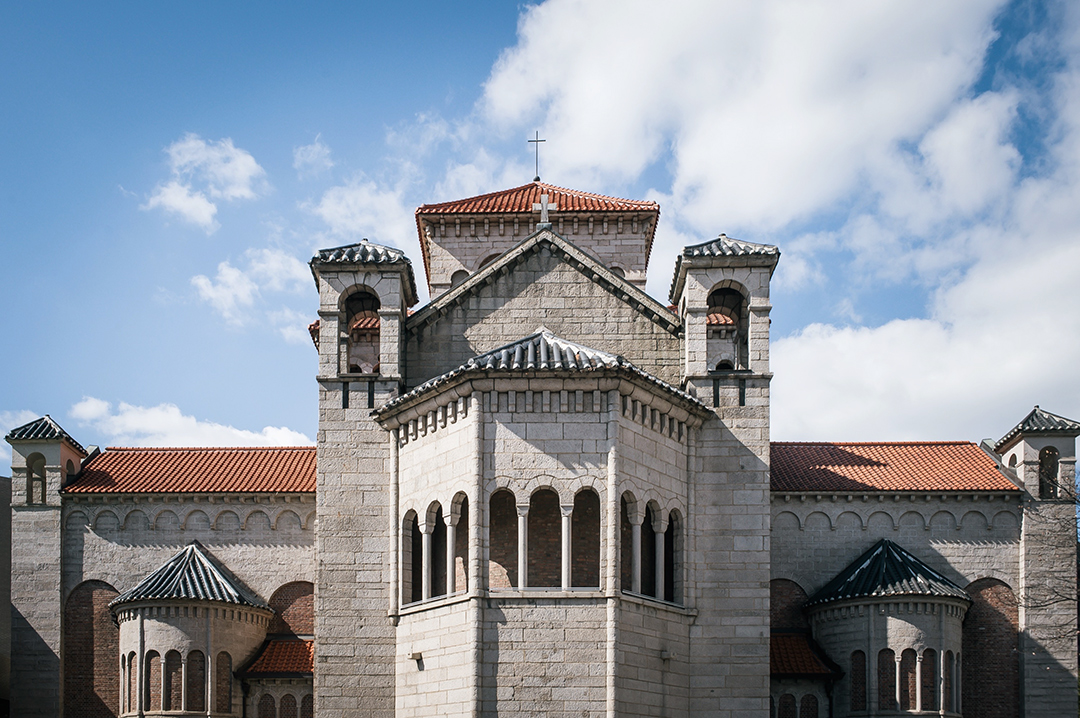 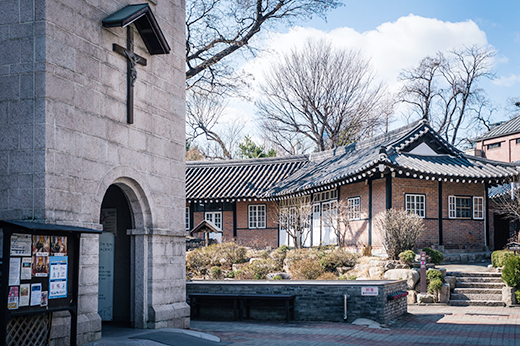 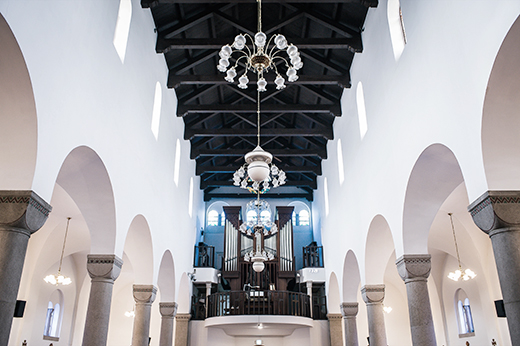 The Western architectural style blends in well with hanok.

Western Architectural Style in Jeongdong
The reason why people refer to Jeongdong as a good neighborhood for taking a walk is in that, instead of just having a beautiful landscape, it provides an opportunity to see the European architectural style that was adopted during Korea’s modernization from up close. In other words, Jeongdong is full of exotic scenes.
As you walk along Sejongno from City Hall subway station exit No. 3, you will pass an unusual-looking building with orange roofs. It’s Seoul Anglican Cathedral, officially known as the  Cathedral Church of St. Mary the Virgin and St. Nicholas. The church was built using the Romanesque Revival architectural style that had swept Europe in the late 10th century, and is the only public structure of the kind. In 1911, Mark Trollope, who was the bishop of Korea, commissioned British architect Arthur Dixon to design the church. The building occupies the lot where hanok-style Jangrim Cathedral used to stand and features the combination of Romanesque characteristics and arch shapes, as well as hanok’s simplicity. The construction began in 1922 with the first phase ending in 1926. Along with Myeongdong Cathedral, it was involved in the pro-democracy movement in June 1987. 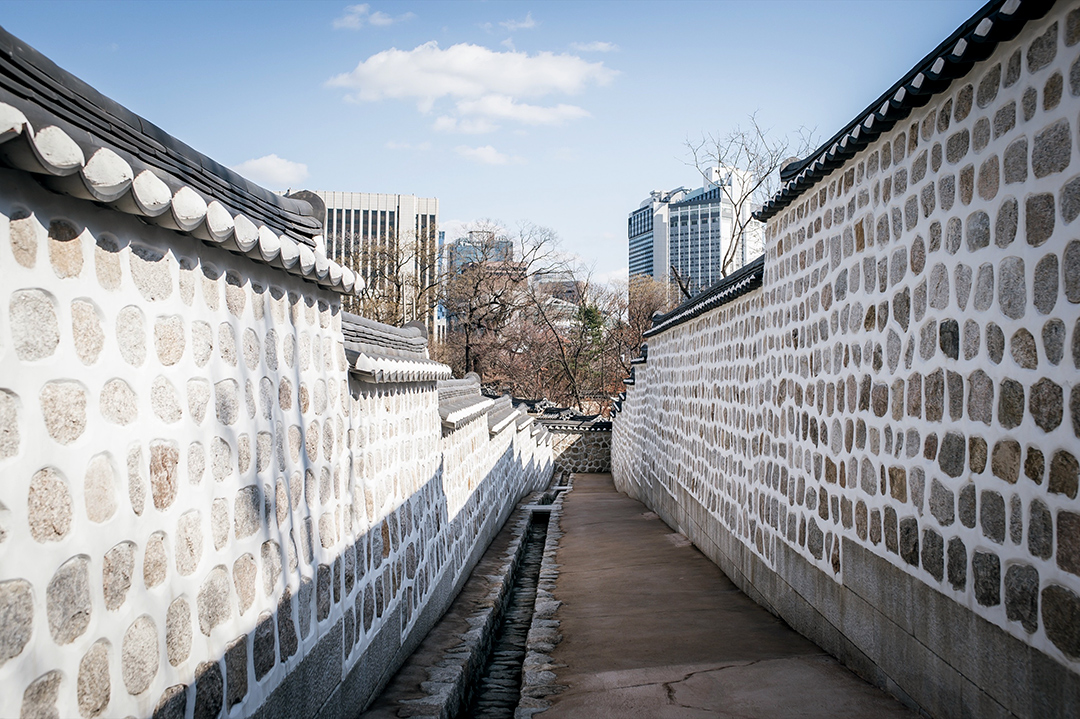 As you walk past Seoul Anglican Cathedral, you will come across the Road of Emperor Gojong. The unique street name is derived from what was marked as ‘King’s Road’ in the old map of Jeongdong drawn by the U.S. legation during the era of Korean Empire. In1896, King Gojong went into the Russian legation for his safety after losing his wife Empress Myeongseong to the Japanese army. He would rule the country from there for about a year commuting to Deoksugung. The passage was hence named the Road of Emperor Gojong. The 120m-long narrow alleyway with stonewalls on both sides has a romantic atmosphere, which is ironic considering its sorrowful history.
Walking down the King’s Road along the Residence of the U.S. Ambassador, you reach the old Central Hall of the Salvation Army. The two-story brick building from 1928 was used as the headquarters for the organization’s missionary and social work as well as its training college. The gable roof in the center with a simple, yet well-balanced look, red bricks, and the four stone pillars standing by the main entrance show the neoclassical architectural style of the time. 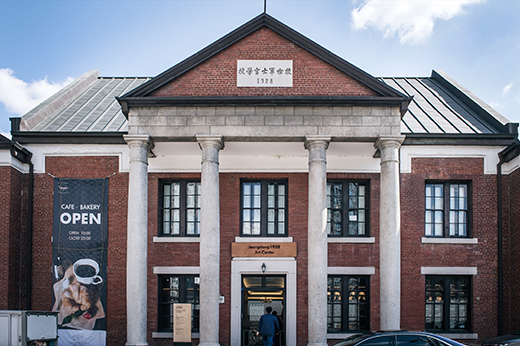 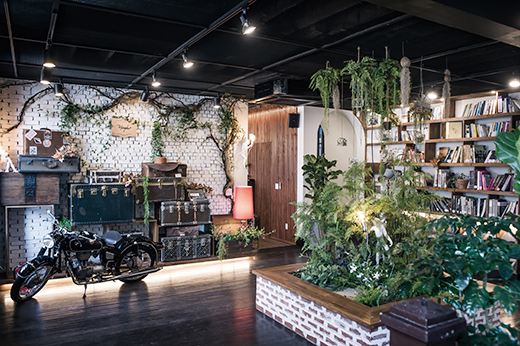 Recently, the building reopened as ‘Jeongdong 1928 Art Center,’ providing a space for performances, exhibitions, and various community activities. Part of the building is used as the Salvation Army Museum of History where the meaning and value of modern history and culture of Korea are displayed and shared. The reopening is aimed at ultimately bringing the past into the present-day space of art and culture, thereby regenerating the historical value of Jeongdong.
Once you finish surveying the Salvation Army Central Hall, go back out in the direction of the Road of Emperor Gojong. Traces of the former Russian Legation stand right next to the street. It was on the highest ground in Jeongdong back then, which signifies the power the country once had. There only remain its site and a tower now, a reminder of the transience of time. 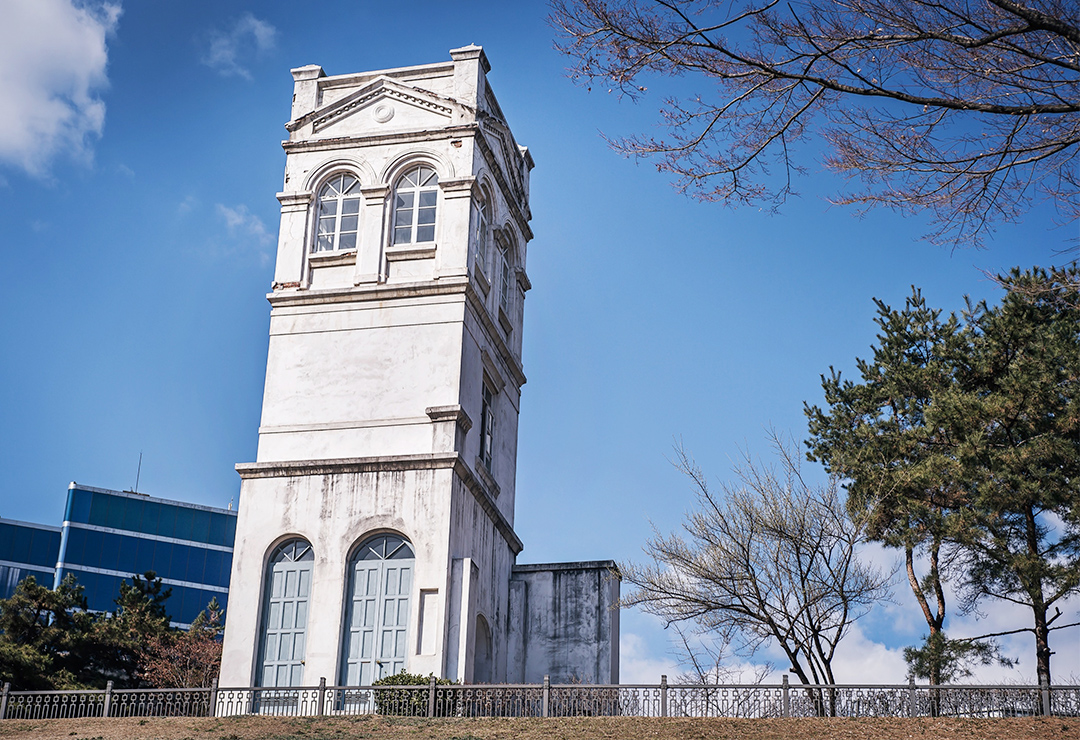 Site for the old Russian Legation 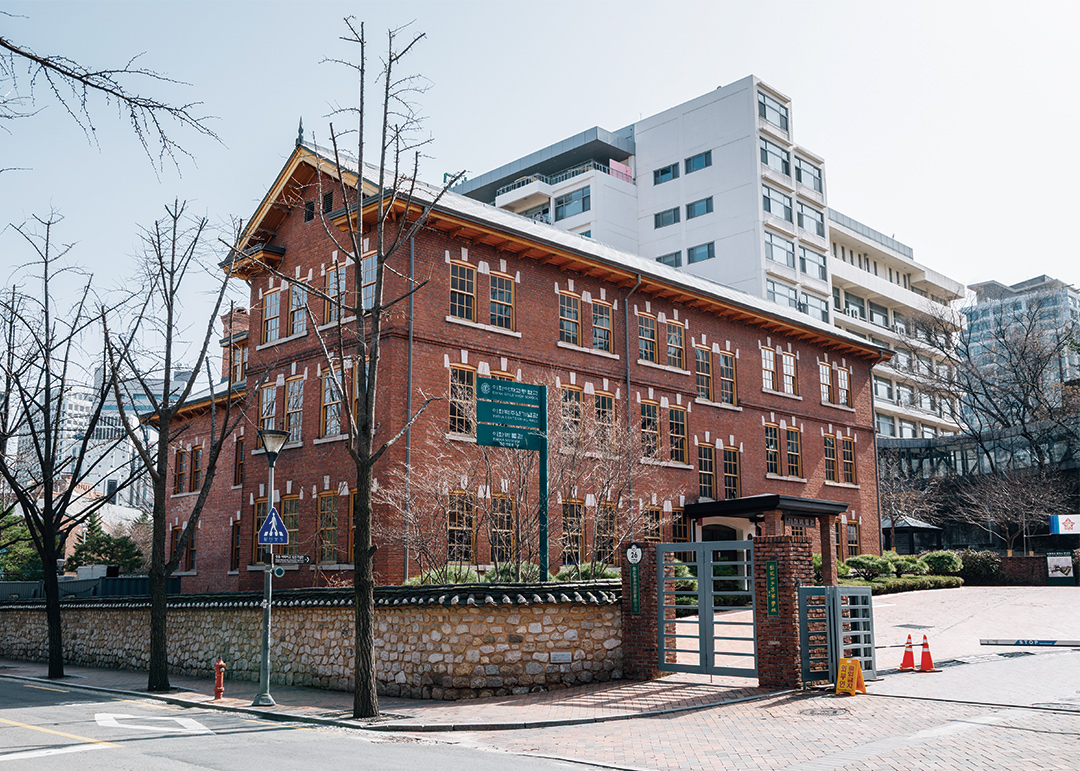 Place of Hope and Romance
Heading down to Ewha Girls’ High School, your path will cross with the main Jeongdong-gil and at its entrance you can find Ewha Hakdang and the site of the Sontag Hotel.
The Sontag Hotel was a foreigner-only hotel run by Antoinette Sontag, a German citizen who had come to Korea with Karl Ivanovich Weber, the first Russian envoy to Korea. She lived in Korea for 25 years and introduced coffee to King Gojong for the first time, which later led to the production of various films and books dealing with the topics of the Korean emperor and coffee. She also took the role of a confidant to King Gojong who wanted independence and sovereignty for Korea. After the king granted her a plot of land with a hanok in it, she renovated the structure to use it as a gathering place for foreign envoys, missionaries, and nationals. As the group got bigger and a need for lodging emerged, she turned the place into a Western-style hotel. That’s how the Sontag Hotel, Korea’s first European hotel, came about. It soon became a place of heated rivalry between diplomats from Western countries. Diplomats, businessmen, and young Korean intellectuals with dreams of a new era got together at the hotel every night for social and political reasons. Some diplomacy worked, while some networking ended in conflict. Jeongdong Gurakbu, or the Jeongdong Club, was also launched at the Sontag Hotel. It consisted of Korean activists who wanted to enlighten the people of Korea on political, economic, and social issues, ultimately freeing the nation from the grasp of other countries. The small two-storied hotel carries that much significance in modern Korean history. 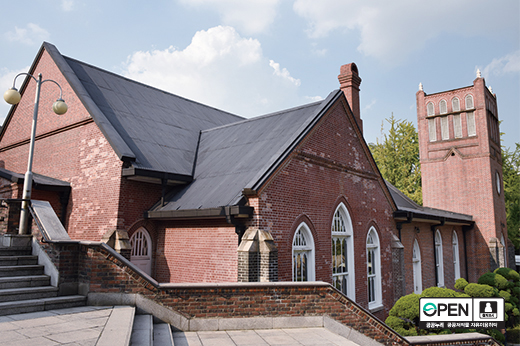 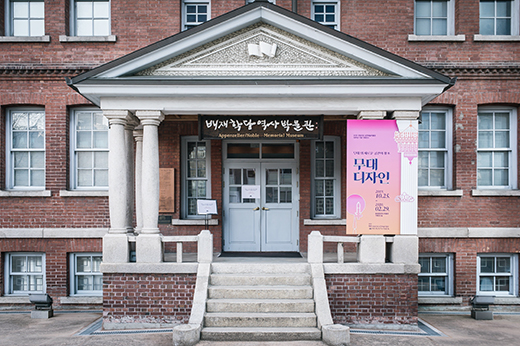 Chungdong First Methodist Church is what greets you next as you walk towards Deoksugung Palace from Ewha Hakdang. In a song titled ‘Gwanghwamun Yeonga(love song)’ which was released over 30 years ago, the lyrics read, “There still is, on Jeongdong-gil under the hill, a small church covered with snow.” That small church is Chungdong First Methodist Church. Built in the 19th-century Victorian Gothic style, a simplified version of British Gothic architecture, the church has a plain exterior without any flair. The wooden interior also adds to the modest appearance.
Next to the church stands Baejae Hakdang. It is Korea’s first Western-style school founded by American missionary Henry Appenzeller. The school is a brick building of the English country house style. Instead of a big, fancy structure, it appeals with its cozy, stable look. However, fine touches were added to the handrails, stairways, and window frames, creating the ambience of a 19th-century American upper-class mansion. 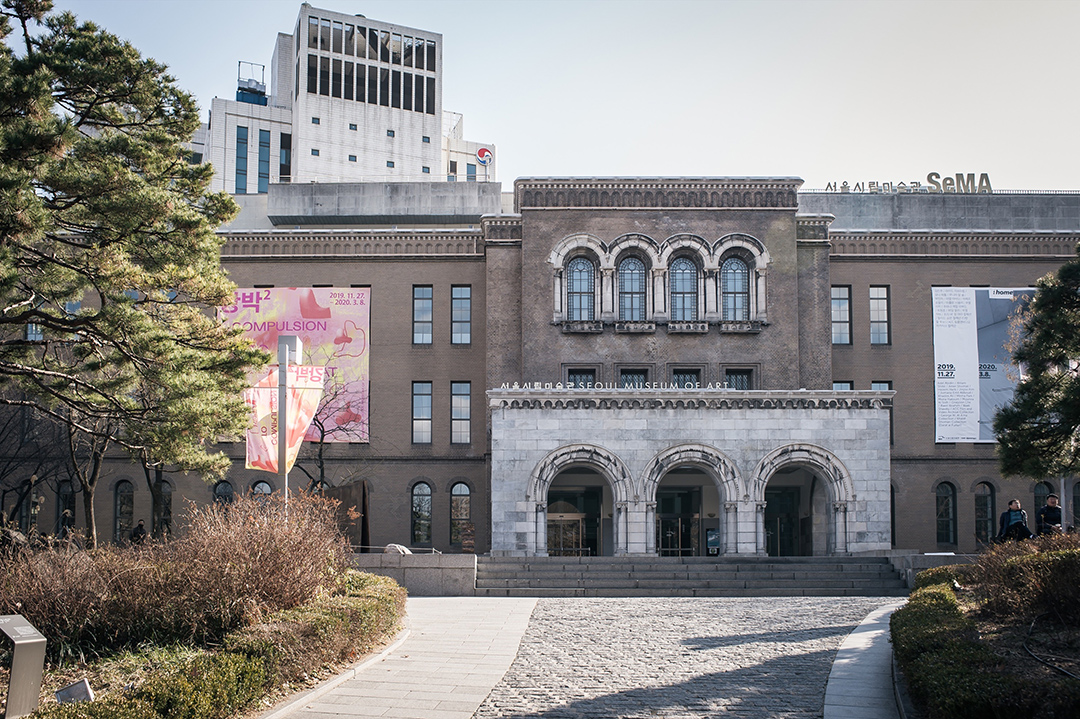 Across from Baejae Hakdang sits Seoul Museum of Art. The main building of the museum was Pyeongniwon, the country’s first court, at the end of the Joseon dynasty. During the colonial rule by Japan, it served as Gyeongseong Court for the Japanese Government-General of Korea. After liberation, it was used as the Supreme Court. It’s interesting that the building was designated as a courthouse three times before becoming the art museum. The three-storied architecture using the Gothic style was made a Cultural Heritage of Korea in recognition of its architectural and historical value. 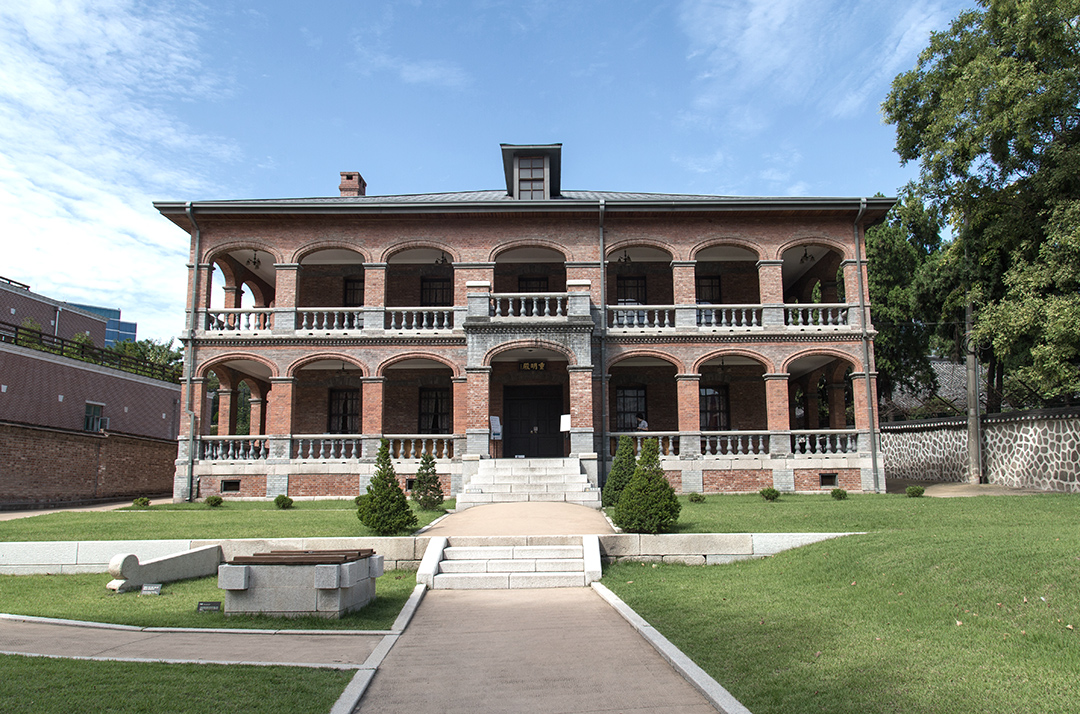 The last stop on the walking tour of Jeondong-gil is Deoksugung Palace. It’s a place where King Gojong stayed after handing over the throne to Sunjong. There are Joseon-style buildings featuring a traditional multicolored paintwork called dancheong in Korean and the wooden material, as well as Western-style structures that adopted the Ionic order of the ancient Greek culture and the Rococo design. Seokjojeon is the first Korean building reflecting the 18th-century European courts. It was designed by British architect John Harding. King Gojong worked from his office in Seokjojeon until his death in 1919. The building offers a rare glimpse into the life of the imperial family of Korea, instead of the royal house of Joseon.
On display at Seokjojeon are old furniture, antique items, and visual materials from the period of the Korean Empire, which show the emperor’s longings for an independent sovereignty.
Jeongdong in the heart of Gyeongseong during the Empire of Korea was always a heated arena of competition between foreign powers who wanted to take advantage of the Korean Peninsula. A walk in Jeongdong will allow you to relive bits and pieces of the fierce lives of those who yearned for independence and to feel the romance of their stories.