Men’s First Step into Space, Moscow Cosmonautics Museum and Astronautics & Aviation Center
Russia was the world’s first to dream of space travel, and it cherishes the traces of its decades-long efforts and challenges aimed at exploring space.
Russia’s Advance Into Space
After World War II, the United States and the Soviet Union(present-day Russia) engaged in what’s called the Space Race. Through the development of spacecrafts and technological advancement, the two rivals tried to prove their supremacy in spaceflight. The Soviet Union moved quicker than the U.S. On October 4, 1957, it successfully launched the first artificial satellite, ‘Sputnik 1,’ into Earth orbit. In November that year, the second spacecraft named ‘Sputnik 2’ was sent into Earth orbit with a space dog named ‘Laika’ on it. At that time, U.S. President Eisenhower downplayed the Soviet achievement, calling it “one small ball in the air.” Behind closed doors, however, he gathered American scientists and experts to emphasize that they must beat the Soviets in the Space Race. In 1958, under these circumstances, the U.S. founded the National Aeronautics and Space Administration(NASA). 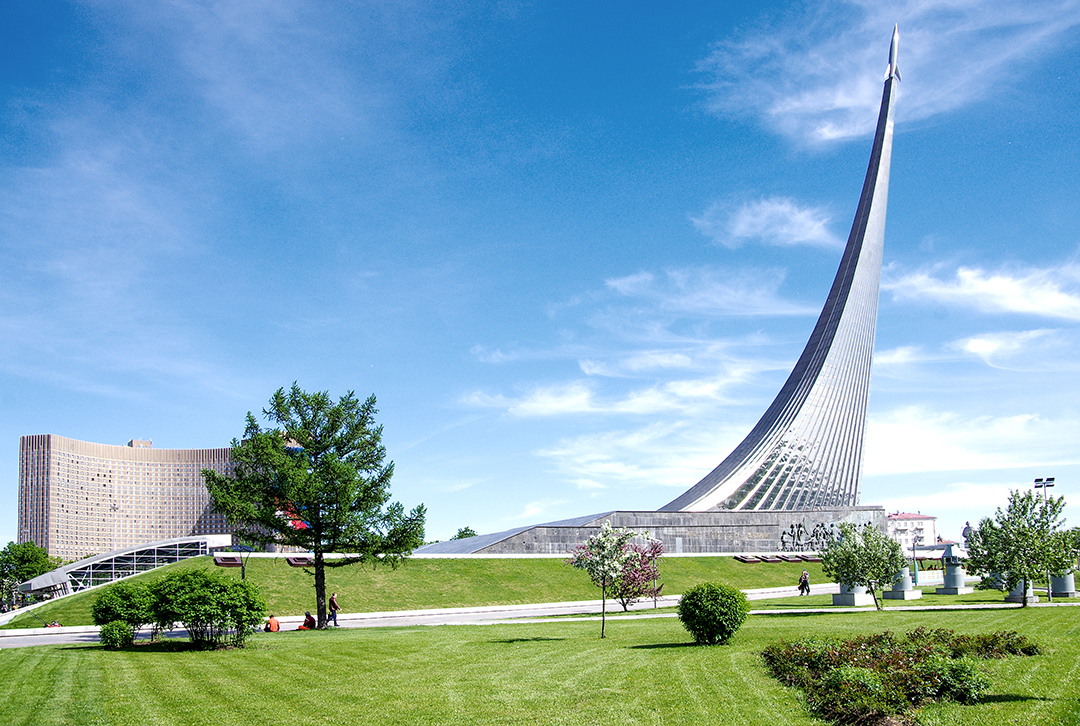 The Soviet Union did not slacken its effort. Instead, it achieved yet another milestone. In 1961, Soviet military pilot Yuri Gagarin became the first human to travel space. On board Vostok 1, Gagarin successfully completed one orbit of Earth in a spaceflight that lasted over an hour. The United States was under growing concerns about the Soviet possessing a weapons program based on its space technology. U.S. President John F. Kennedy announced a proposal of “landing a man on the Moon and returning him safely to Earth" before 1970. It was the beginning of a full-blown effort by the United States to develop its space aeronautics. Finally on July 20, 1969, the U.S. became the first country to send a human to the Moon. Astronaut Neil Armstrong flew Apollo 11 and landed on the Moon for the first time in history. It was a much-awaited victory for Americans, and the Space Race between the Soviet Union and the United States further intensified. 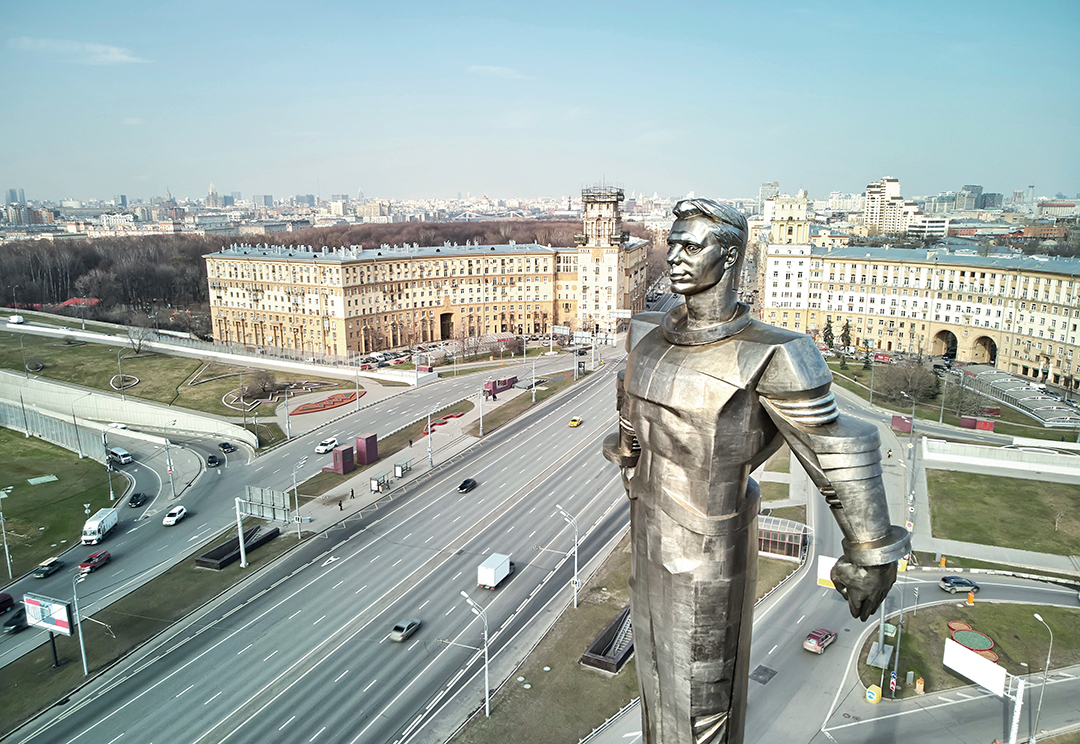 The giant statue of Yuri Gagarin in Moscow

The two rivals began focusing their attention to other planets. Through the ‘Venera(Venus)’ program, the Soviet studied the Venusian atmosphere. Meanwhile, the U.S. landed ‘Viking 1’ and ‘Viking 2’ on Mars, which transmitted photos of the planet to Earth. Americans also successfully built the first-ever Space Shuttle, Columbia. The launch propelled the development of other space shuttles to navigate the universe. The Soviet Union began operating the first manned space station named ‘Mir.’ With the experience and technology gained from the previous space projects, the Soviet launched the first module for Mir in February 1986. The continued success in space exploration by the Soviet amid the tug of war with the U.S. came to a stop as the regime collapsed in 1990 and the country suffered economic losses. Currently Russia is striving to regain its national confidence regarding space exploration. The Russian government has designated the aerospace industry as one of the top national priority tasks, and has developed space tourism. In the U.S., entrepreneurs such as Jeff Bezos of Amazon and Elon Musk of Tesla have started private aerospace companies. Russia is doing it on a national scale. Its plans include sending cosmonauts to the Moon by 2025 as part of its project to build a permanent lunar base.
In surveying the history of Russia, one cannot omit ‘space’ from it. The Museum of Cosmonautics and the Astronautics and Aviation Center in Moscow are full of records showing a national enthusiasm in understanding and exploring space since the Soviet era. 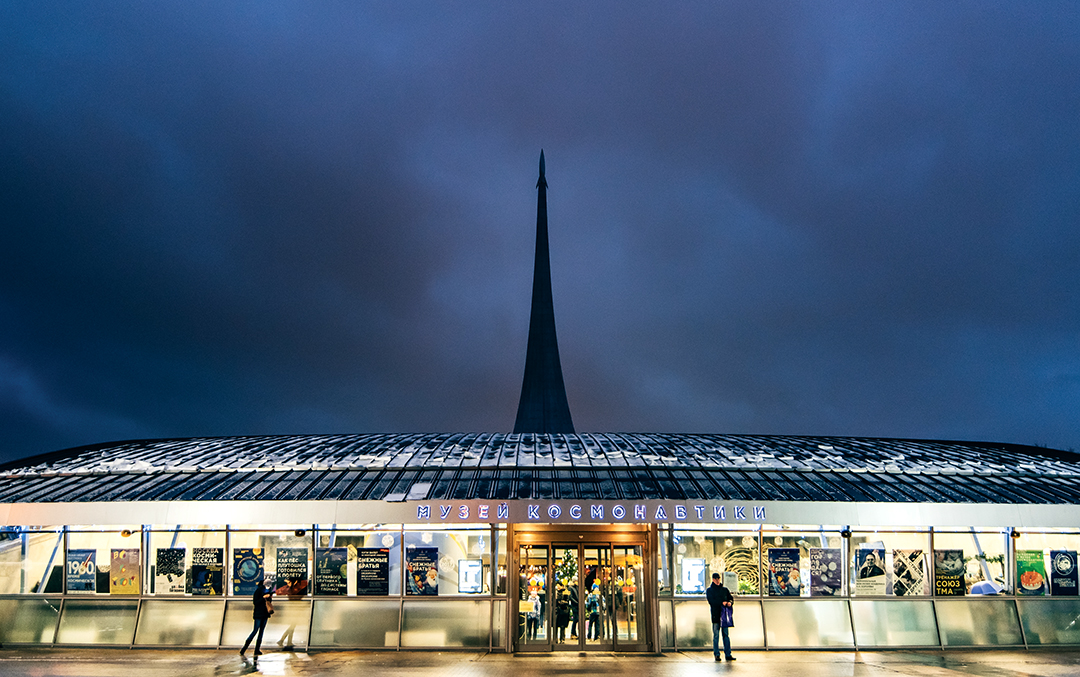 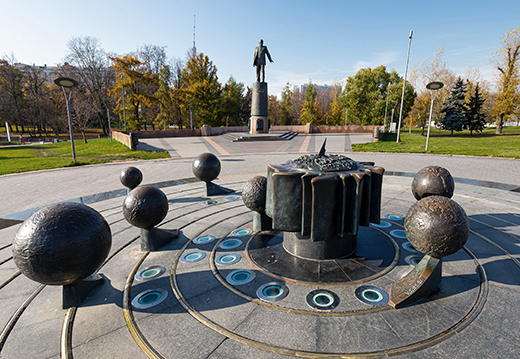 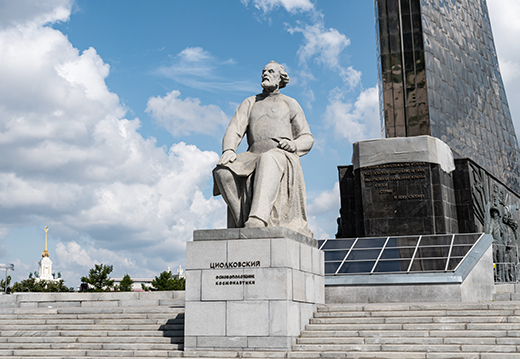 Cosmonautics Museum Compiling Russian Space History
From the exit of the VDNKh metro station, you can see the Monument to the Conquerors of Space. The titanium obelisk surpasses 100 meters in height and features a miniature rocket seemingly ready to be launched on its top. The monument was built in commemoration of the first space travel by Yuri Gagarin. In front of the structure is a statue of Konstantin Tsiolkovsky, the precursor of astronautics during the Soviet era. To the south of the monument is Cosmonauts Alley displaying bust sculptures and statues of important figures in the Soviet space program. The Museum of Cosmonautics can be found right down the alley. The state-run museum exhibits everything space-related from the history of aviation to wide-range data and models regarding astronomy, space exploration, and space technology. The museum opened in 1981, marking the 20th anniversary of Gagarin’s first orbiting of Earth. 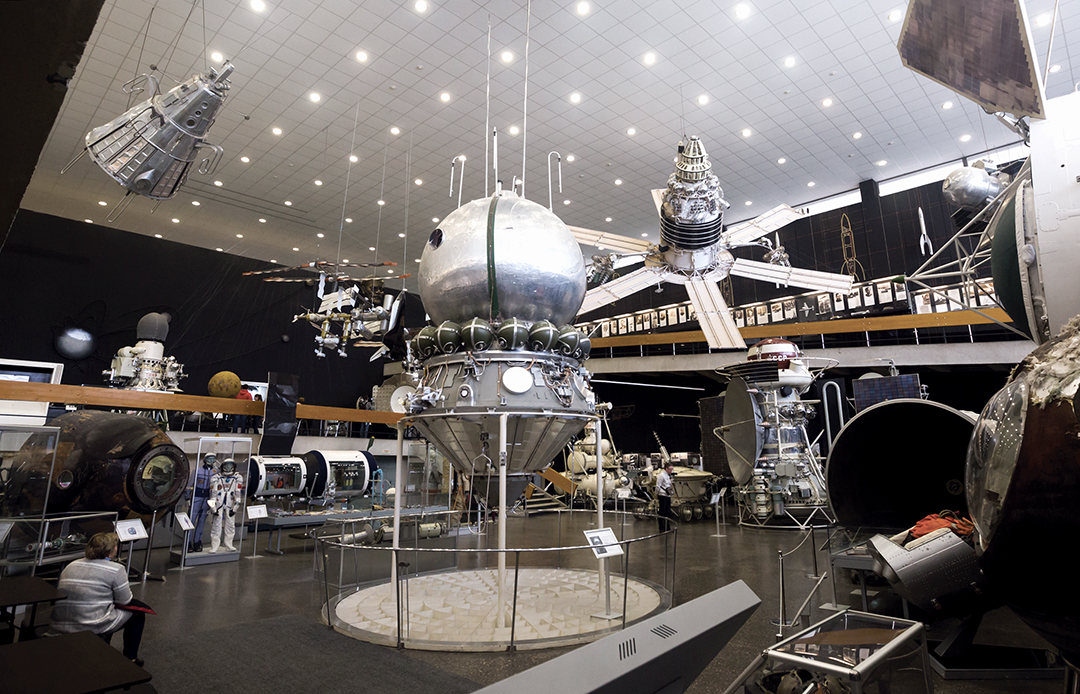 A Russian satellite and spacecraft that have been to space

The exterior of this single-story building is quite simplistic. Behind the ticket booth, a Yuri Gagarin statue greets tourists with open arms. Spacedog Laika, which went to space even before Gagarin, is also displayed as a stuffed replica, along with a part of its spacecraft. Unfortunately, Laika did not make it back home. To the left of the entrance, a replica of Vostok 1, the first manned spacecraft, is situated. There are also Strelka and Belka, the two spacedogs that successfully orbited and returned to Earth on board Sputnik 5 in 1960. To the right stands a scale model of Luna 3 space probe which was launched in October 1959 to photograph the far side of the Moon for the first time in history. As you walk into the next exhibition room, you see the photos of famous Russian cosmonauts and a scale model of the space station. 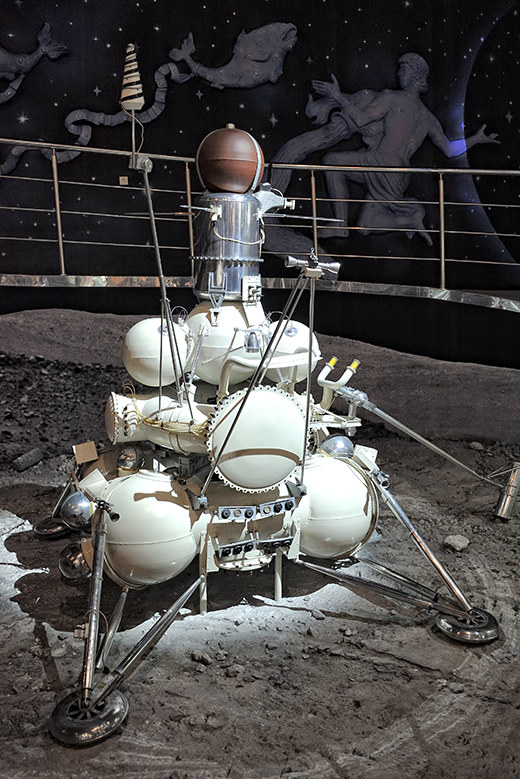 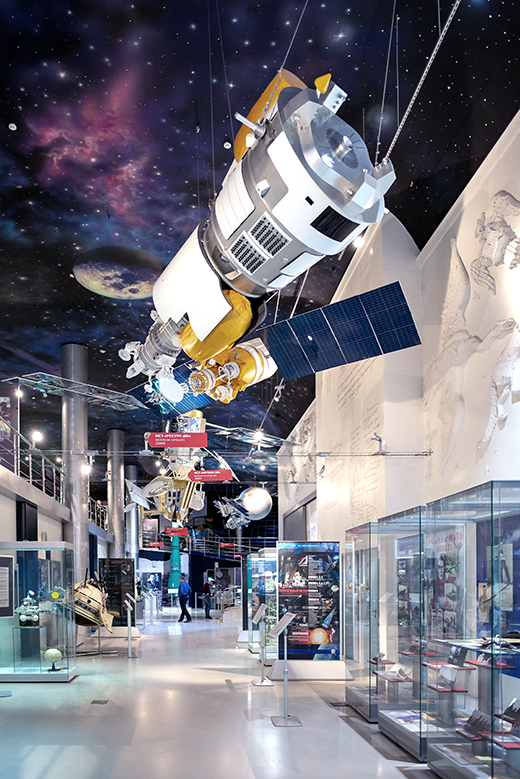 In the museum’s basement, the exhibition space continues. There is an aircraft replica featuring astronauts training for zero gravity on one side. A real-life replica of the Mir space station allows you to get a glimpse of its interior. Photographs of a daily life in space by cosmonauts and a ‘space motorcycle’ used for their commutes in the station as well as a space restroom are available. The smaller replicas of the space station and the Moon are hung from the ceiling, creating a space-like setting.
Interestingly, a corner of the basement exhibition space is used for the history of American space exploration. Records about Apollo 11 which landed on the Moon and national flags of countries involved in space adventure, along with photos of their own astronauts in space, are on display. As the last course in the museum, you can experience a cinema hall screening space-themed films. Videos of astronauts training and engaging in actual space missions are played. The museum souvenir shop sells space food. Then, finally you are back on Earth. 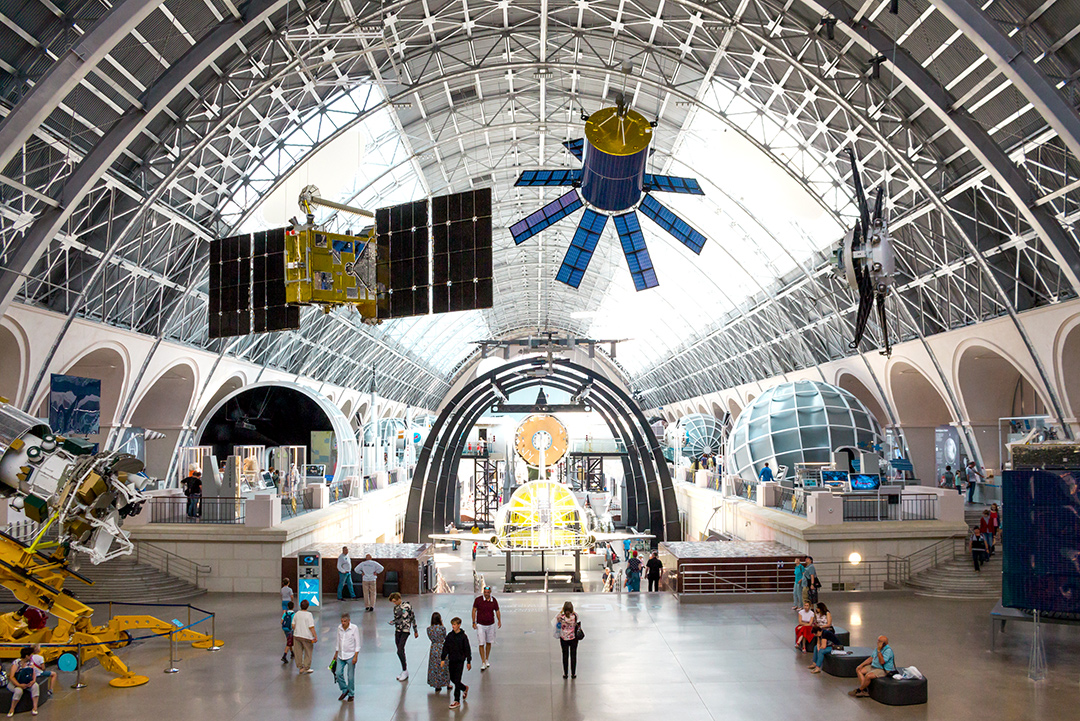 Space Education at Astronautics & Aviation Center
Moscow’s Astronautics & Aviation Center near the Museum of Cosmonautics opened in Cosmos Pavilion in 2018. The expansive center offering the history of Russian space adventure makes you feel like you’re traveling around the solar system. The center also provides: some 120 pieces of aircraft and space technology models; arms industry product samples; and over two-thousand items of rare documents, photographs, and videos on space missions.
The exhibition space is divided into three sections. First, in ‘Space Boulevard,’ the center displays full-size articles of exhibit and spacecraft replicas, focusing on the achievements by the Russian space industry and the space projects from the 20th century. The most impressive display is the life-sized model of the Mir orbital station. Other noteworthy exhibits include the automatic Diamond orbital station, one of the most powerful F-170 rocket engines in the world, KKS-1 booster, GLONASS-K spacecraft, and Express-1000 spacecraft. There’s an interesting area called ‘Design Bureau’ that provides a compilation of research data in regards to space-related medical, biological, and astronomical studies. It is more like a science lab in its layout. Visitors can learn about space agriculture and related facilities, as well as medicine and biology required for space travel. 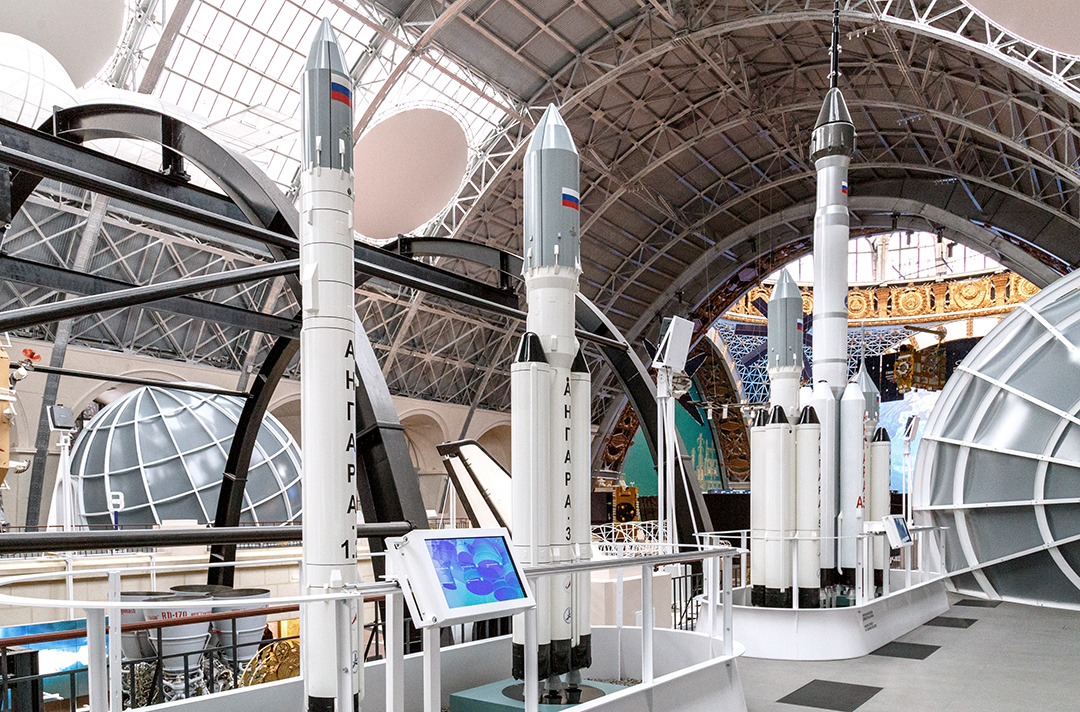 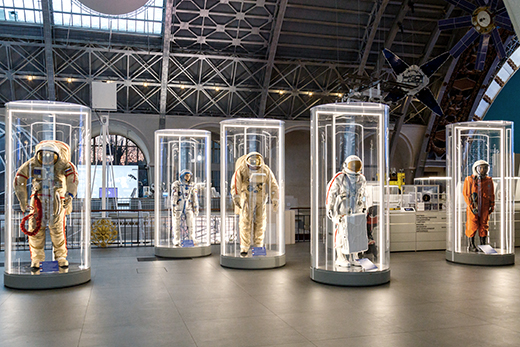 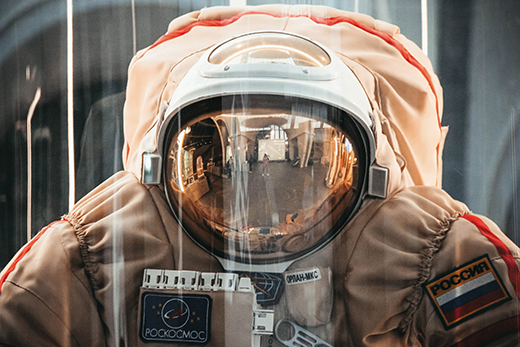 Rockets and spacesuits from different eras

There is a room dedicated to projections regarding time and space we have yet to experience. ‘Spaceport of Future’ is located under the pavilion’s dome and the surrounding exhibition spaces. It introduces current and future space projects, and space science prospects. Interestingly, there is also a collection of projections regarding the galactic system by futurists and science fiction writers. The room is equipped with a game simulator offering a virtual experience of space travel and the 5D Sphere cinema giving you a rundown on the human space adventure. 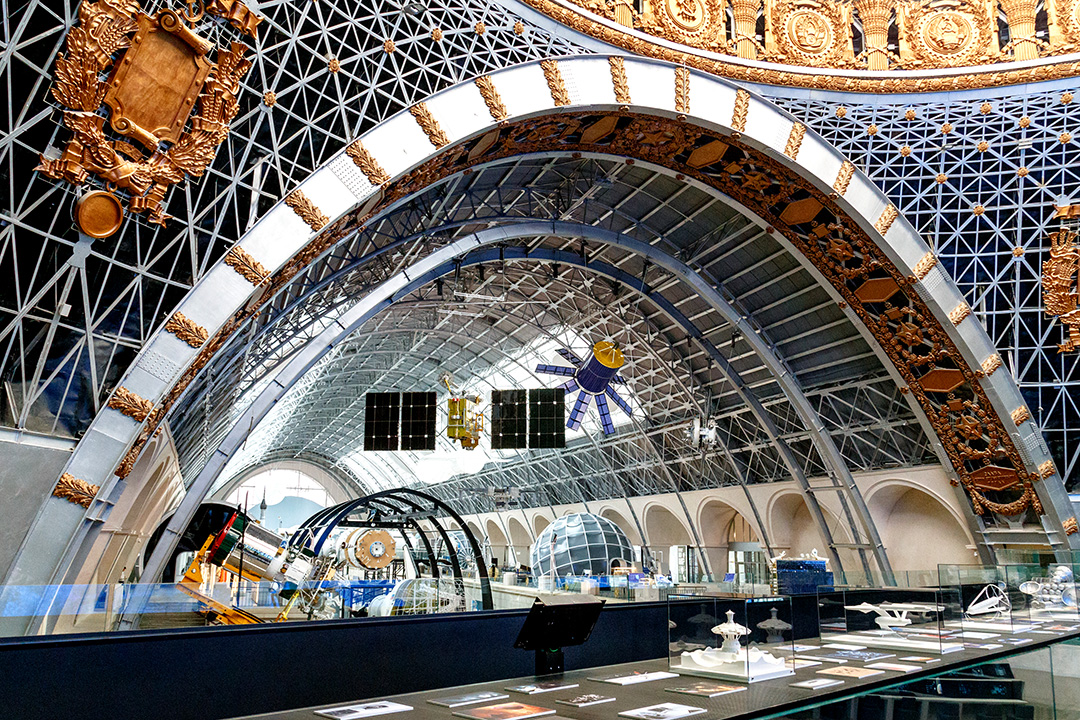 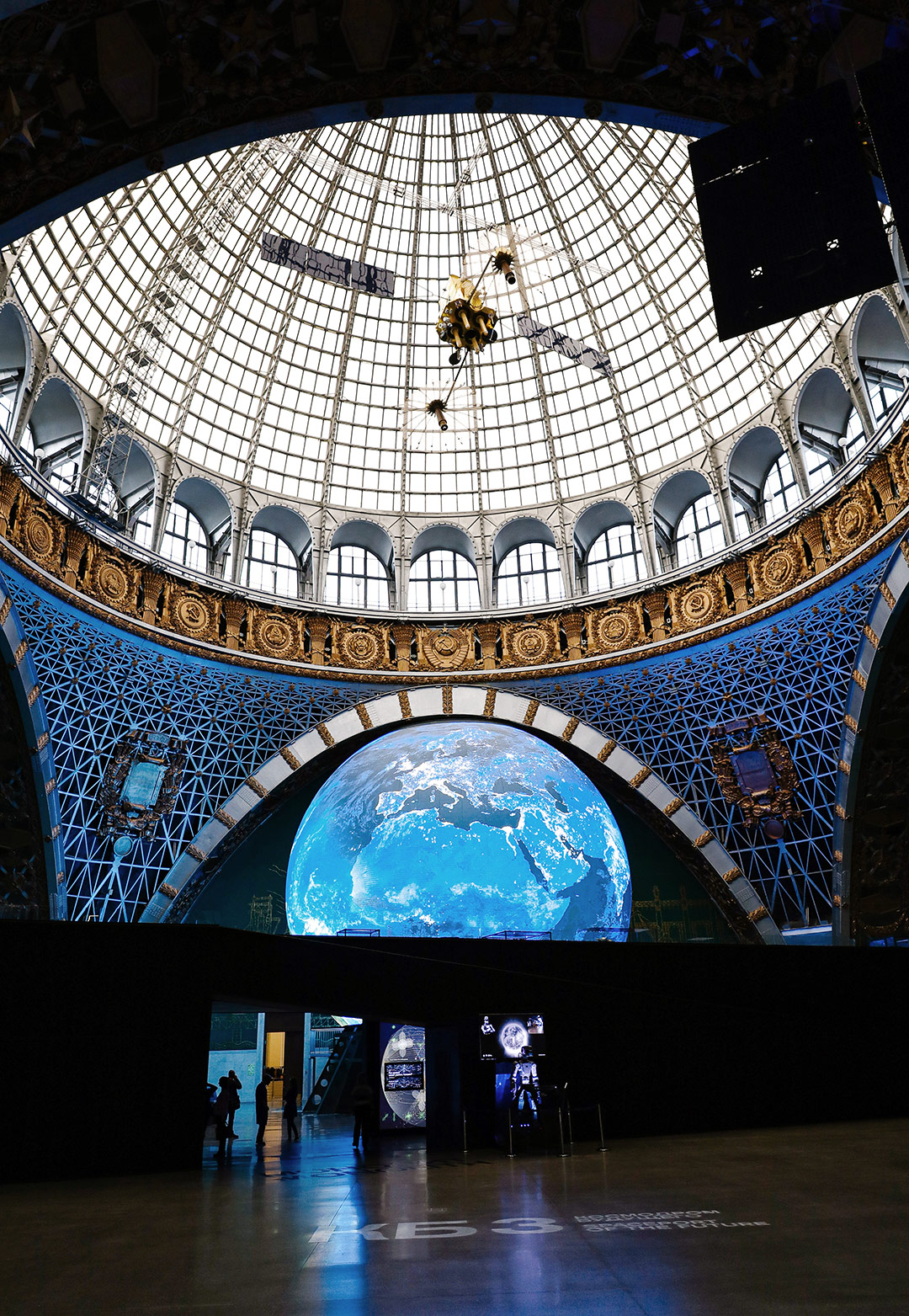 One of the important aspects of the Aeronautics and Aviation Center is its educational mission. Its education section is a vast area surpassing 1,000 square meters in size. It features modern interactive educational exhibits for children and teenagers. Kids aged 4-10 will be taught at the Children’s Education Center while those aged 11-16 at the Adolescent Education Center. Visitors can learn about the history and development of space rockets, aviation and defense industries of Russia. A visit to the center will surely inspire children and teenagers to dream of exploring space just like their ancestors who pioneered the universe before any other nation in the world. 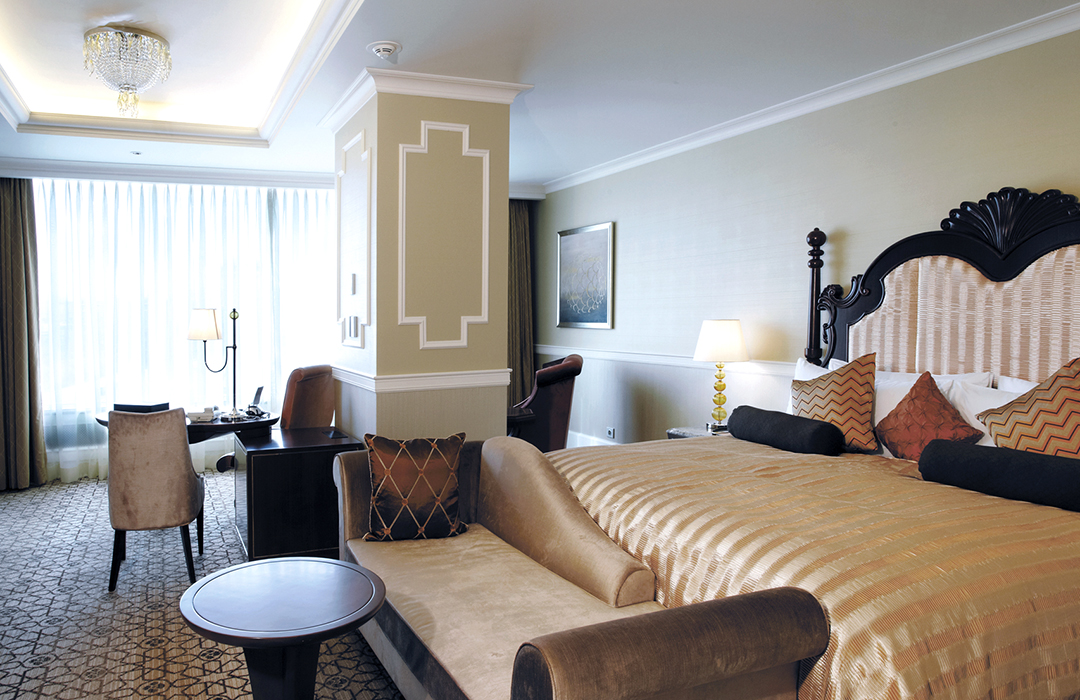 Where to Stay in Moscow: LOTTE HOTEL MOSCOW
Being the first overseas chain hotel by LOTTE HOTELS & RESORTS as a Korean hotel brand, LOTTE HOTEL MOSCOW was chosen as Russia’s ‘Best City Hotel’ two years in a row by travel magazine ‘Conde Nast Traveler.’ Located on New Arbat Avenue near the Kremlin and the Bolshoi Theatre, the hotel offers 300 guest rooms in a 10-story building with four underground stories on a 7,117㎡ lot. It presents diverse epicurean options at four dining facilities, including OVO by Carlo Cracco run by the eponymous, two-Michelin-starred Italian chef and MEGUmi, a New York-style Japanese fusion restaurant.